Nice you keep things moving and some very nice pics along with your narration I like it.... keep it moving

Castle Bera is a 280 year old ancestral haveli belonging to Thakur Baljeet Singh ji. It has only 5 rooms and this place is run as a homestay (though the prices are not exactly homely

)
We stayed here for 2 nights ... one night was all meals included with 2 safaris, the second night was meals only as we just wanted to chill & enjoy the place.
All my communication was with Mr. Gaffar Khan - the manager. As it turned out, he is also a fantastic photographer! 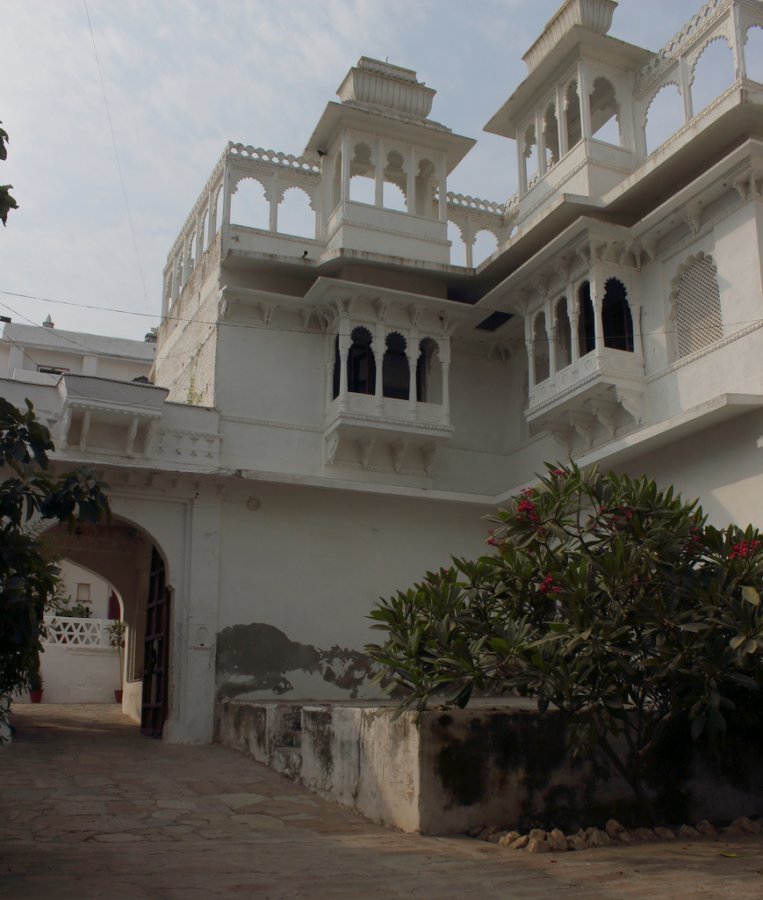 Entrance to the haveli​ Castle Bera as seen through my bedroom window's mosquito net 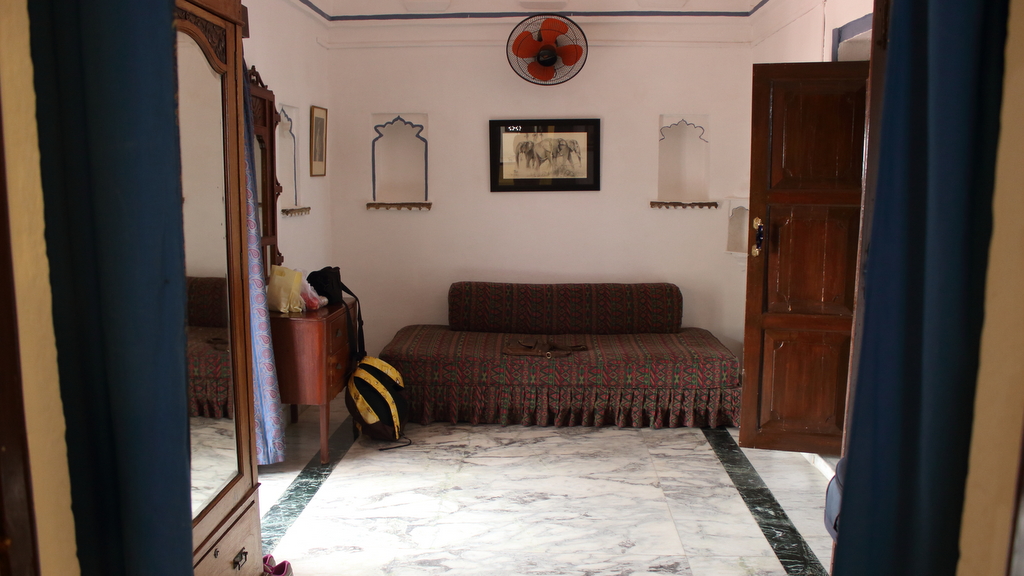 The seating area on entering our room​ 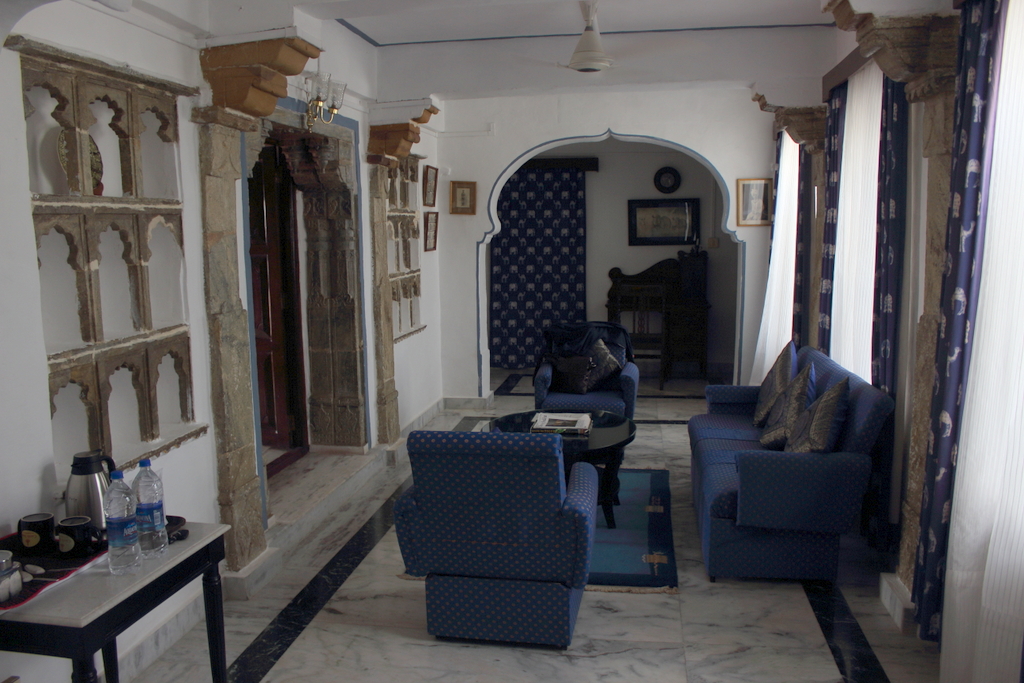 Second seating area inside the room!!!
​ 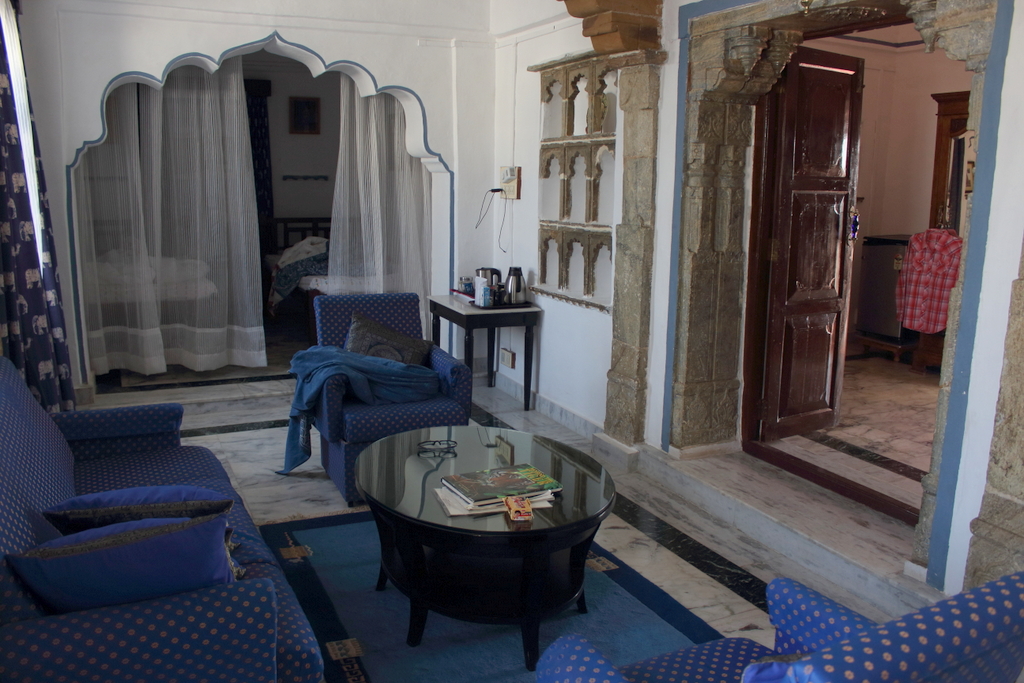 The beds are behind the curtain. The place is full of that old world charm!!!​ 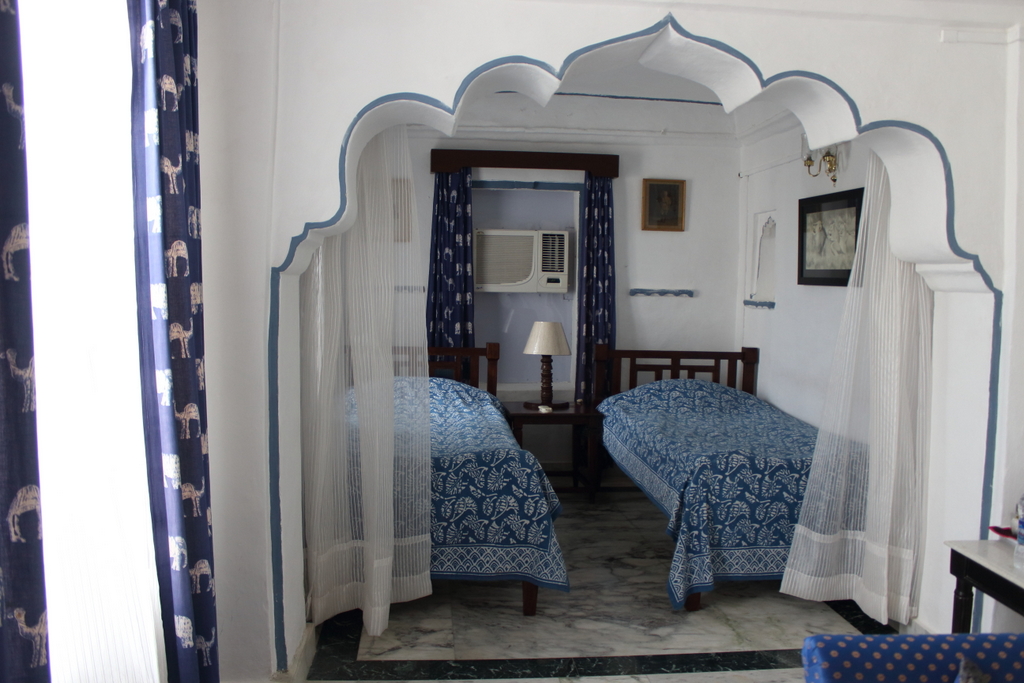 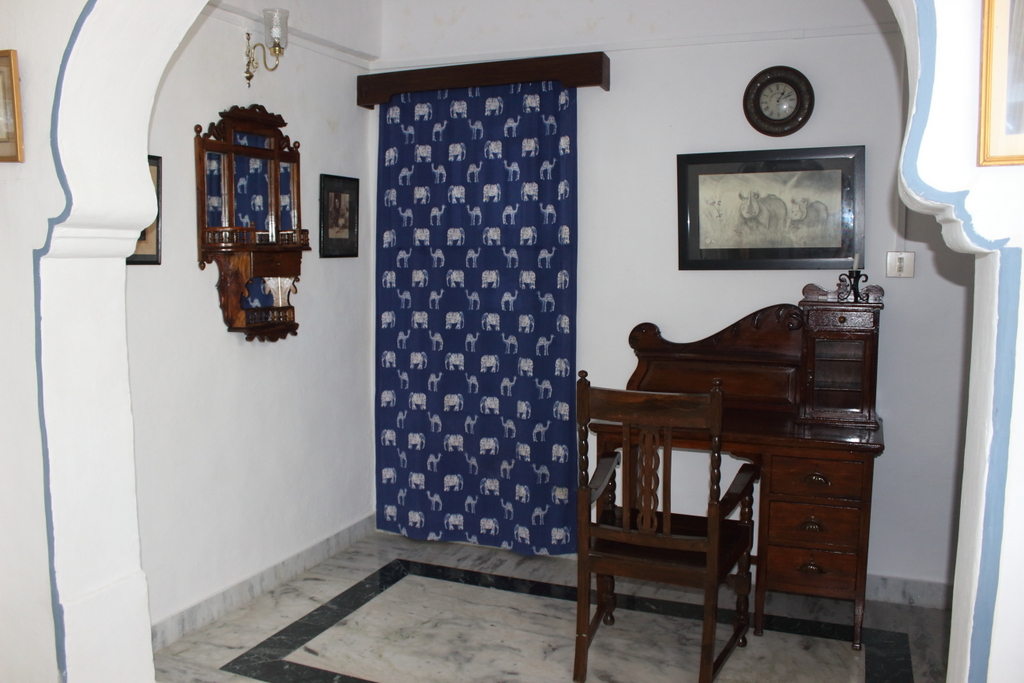 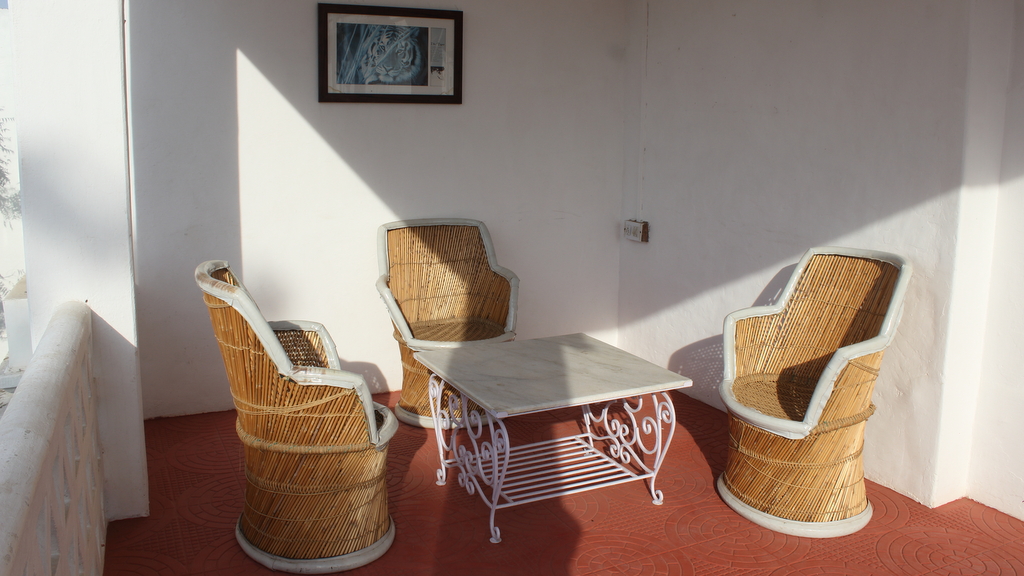 The seating outside our room ...
​ 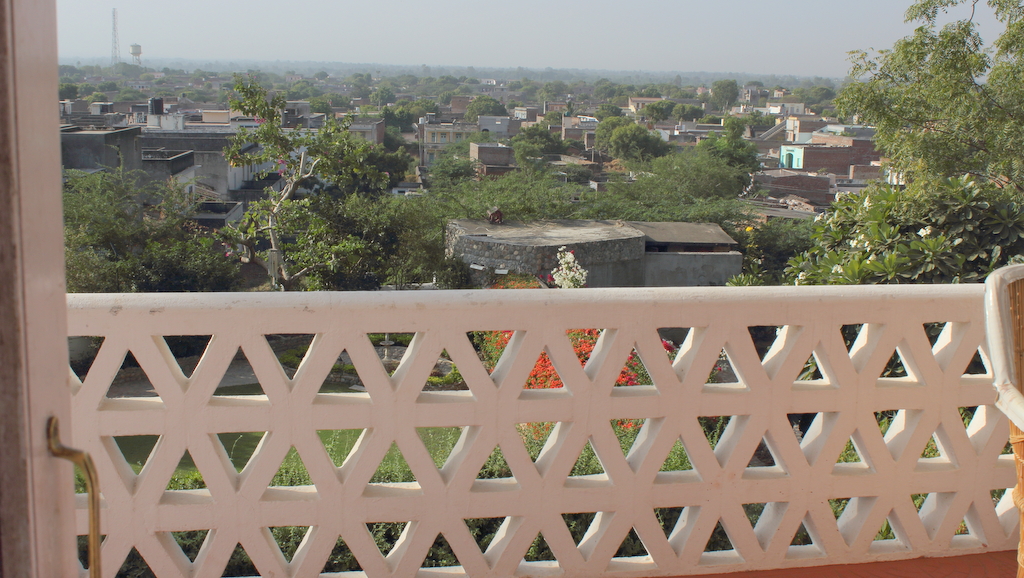 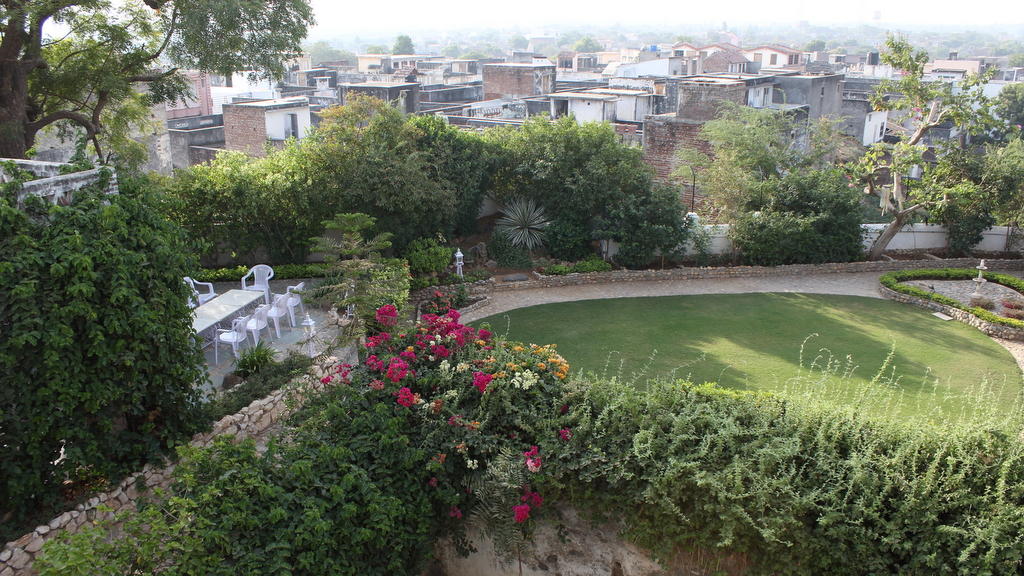 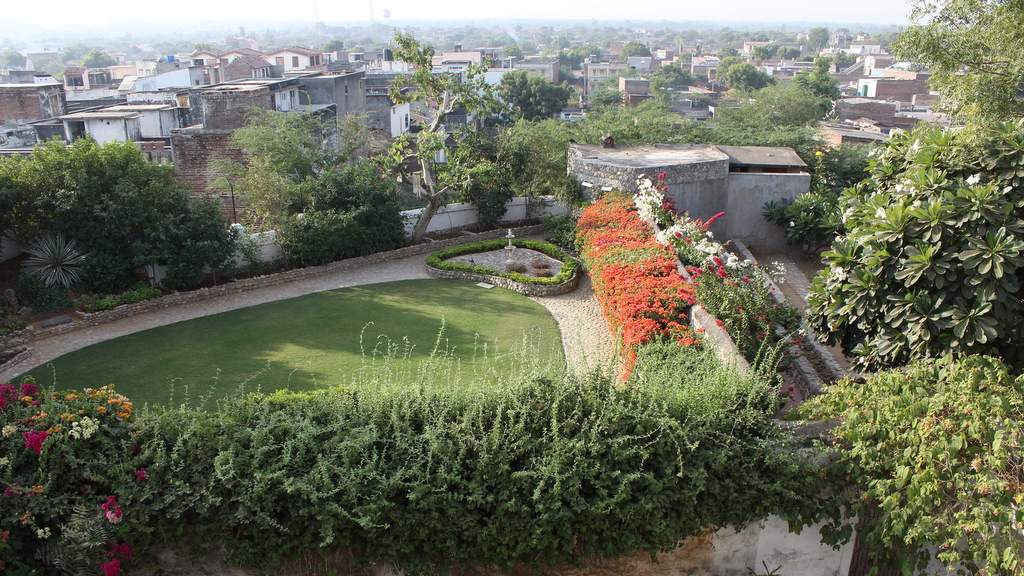 Another view of the garden
​ 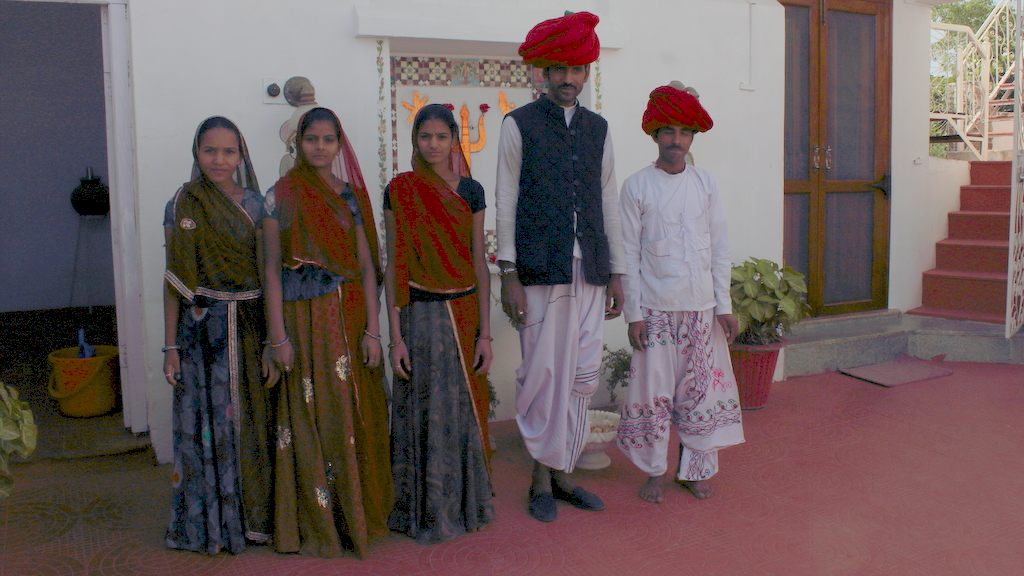 The staff at Castle Bera​
Overall, we felt like royalty! Such an awesome experience!!!

The thing to do in Bera is to go on leopard safaris. Interestingly, the safaris are not in some national park or a restricted area.

The terrain of Bera consists of a rocky landscape full of shrubs & trees. The mountains have tons of crevasses ... that's where it's 40+ leopards reside spread over a vast area.
So basically we go to see leopards which cohabit with fellow humans, cattle & other livestock. Sounded like a very unique experience indeed!!! 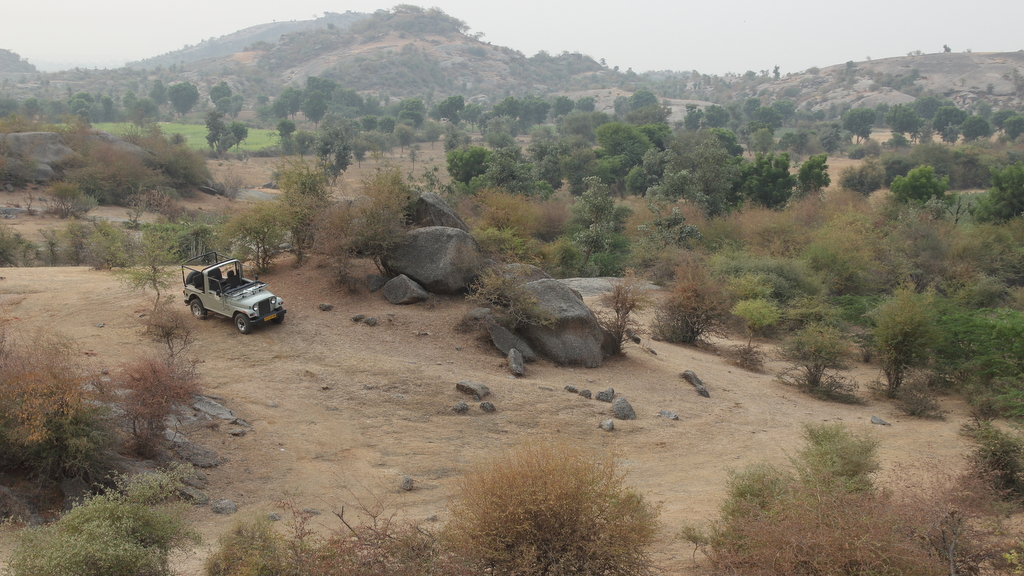 After lunch on the first day, we went on our evening safari​ 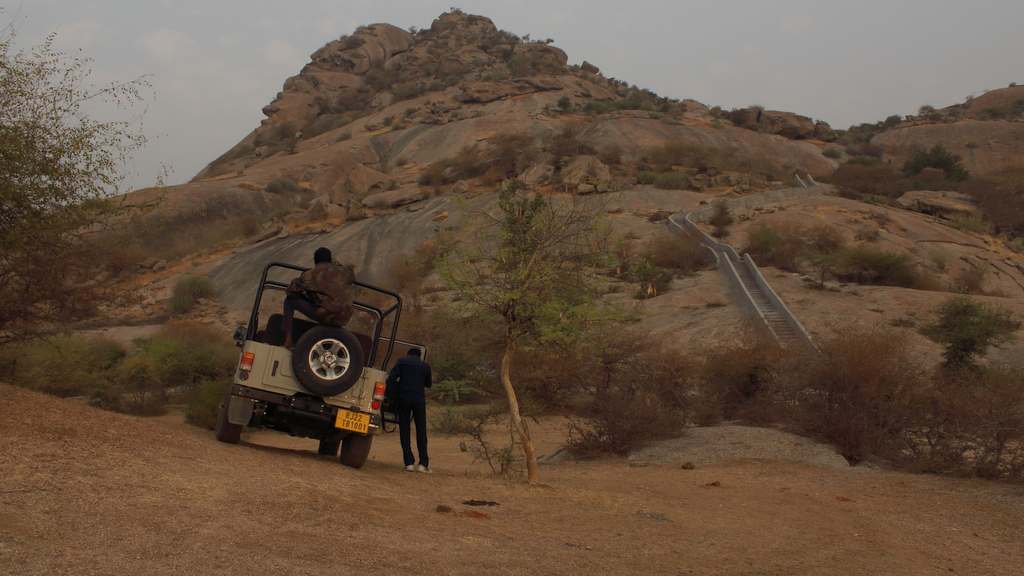 I found the landscapes fascinating. We stopped here to go up the stairs where there was a temple ... still looking out for leopards on the way (though now for a different reason. We didn't particularly relish the idea of being leopard snack) ​

This day wasn't really productive though we saw a lot of peacocks. But we still had one more safari left!!! Next day, we started at the crack of dawn ... at 5:30. It was quite cold & the morning light did wonderful things to the mountains!
​ 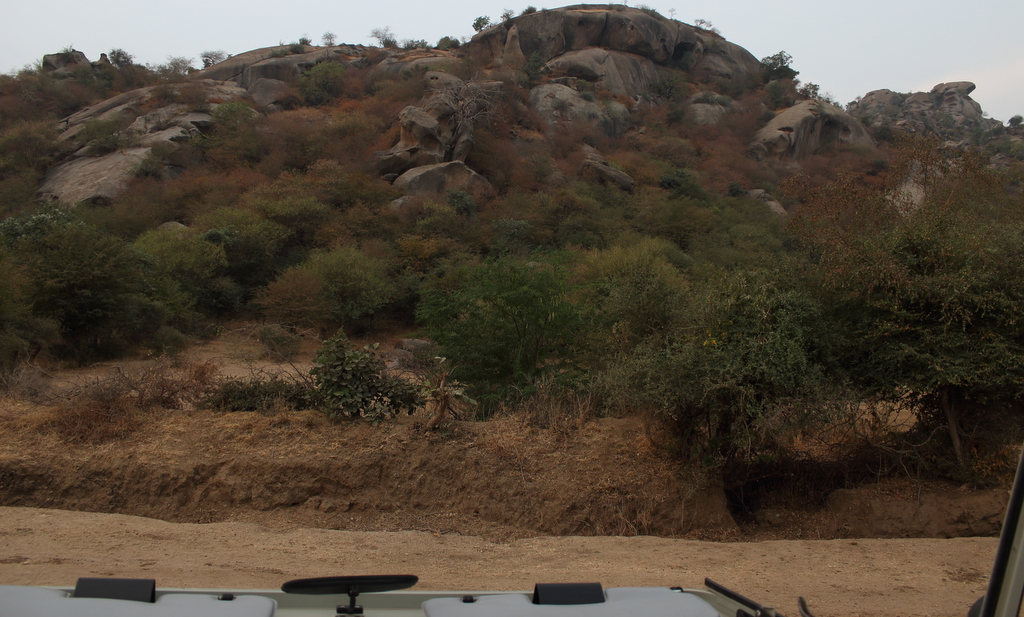 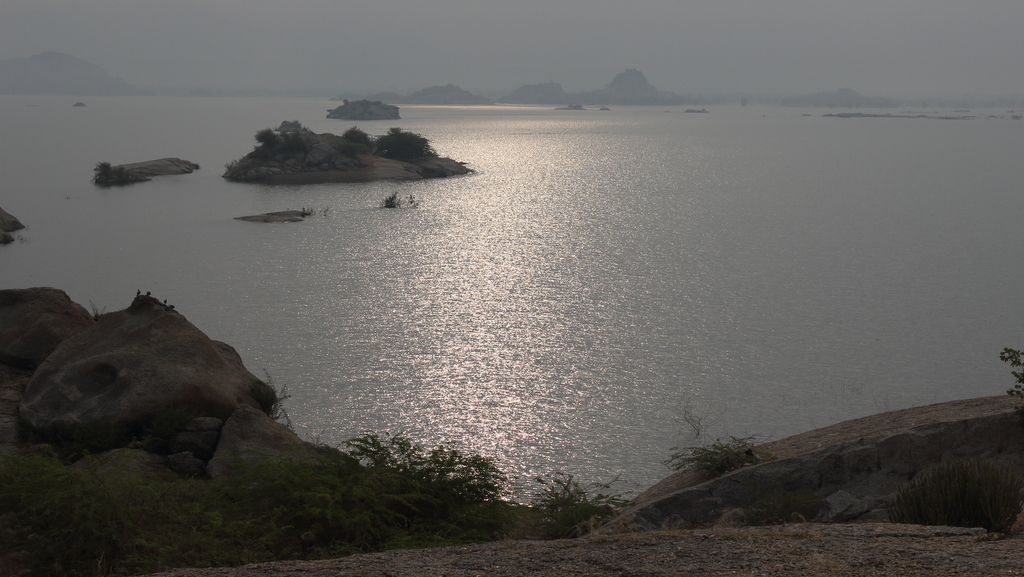 Then we went onwards to the Jawai Dam. We saw 2-3 crocodiles here!​ 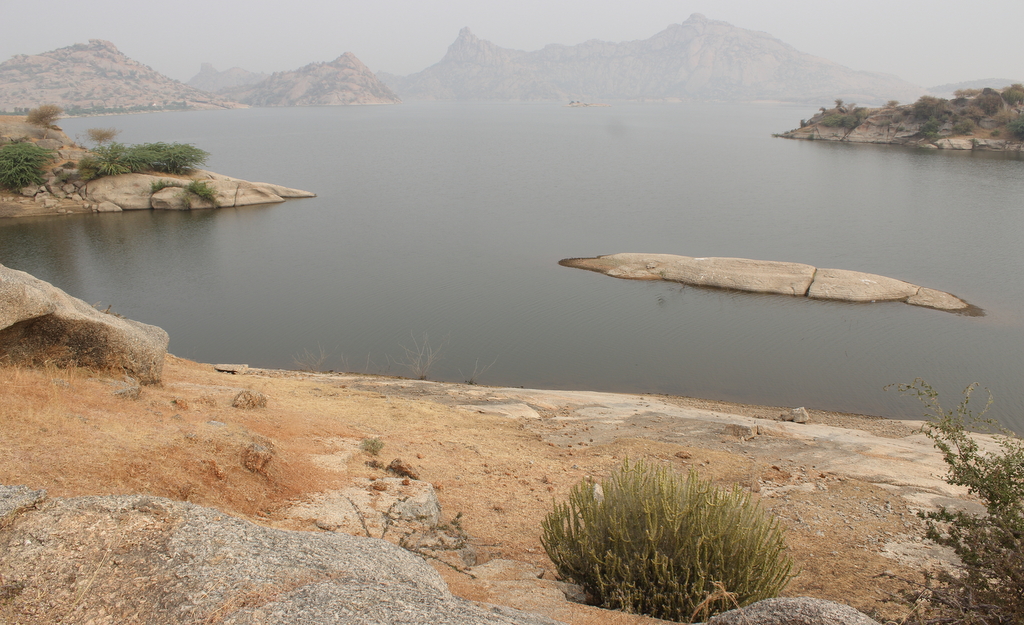 It was quite a beautiful place. It's a huge water body though I haven't managed to capture it's scale.​

Then we returned by lunch time. We were quite happy overall with the beautiful landscapes though slightly disappointed that we didn't see leopards. Oh well, maybe next time.


Then out of the blues, Mr. Gaffar Khan, the manager called me up on my cell & told us to get ready ... for an evening safari. They were giving us a complementary one. How sweet of them!
I was debating whether to go or not as I was a bit tired ... but finally decided to go. Our last evening safari. The driver parked the jeep here & we climbed up on the rock​ 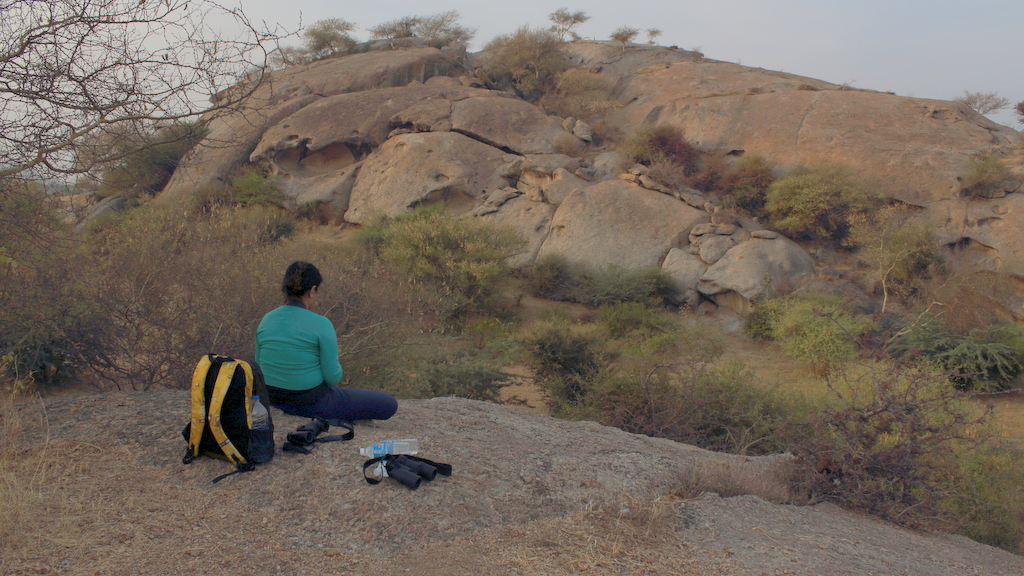 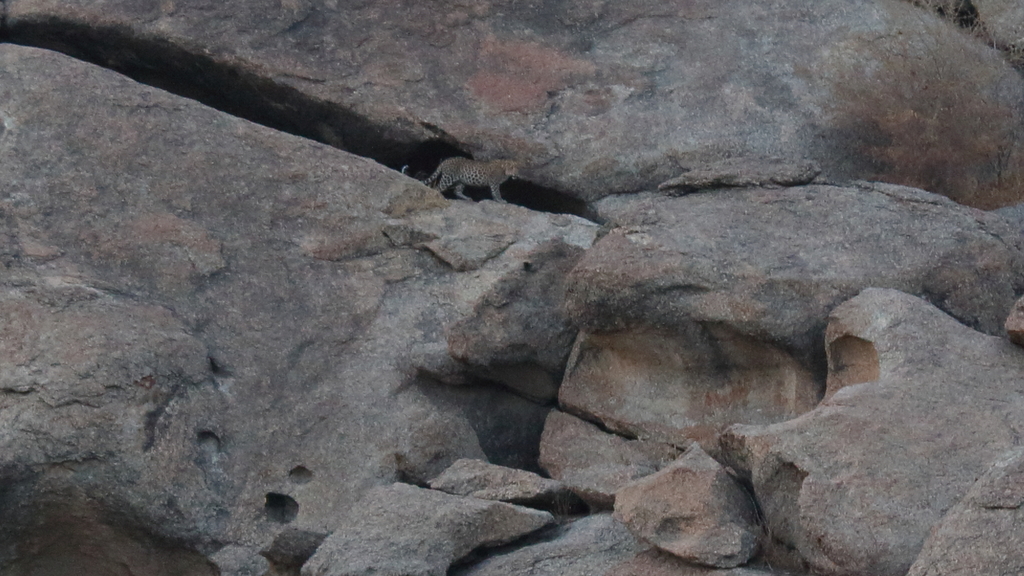 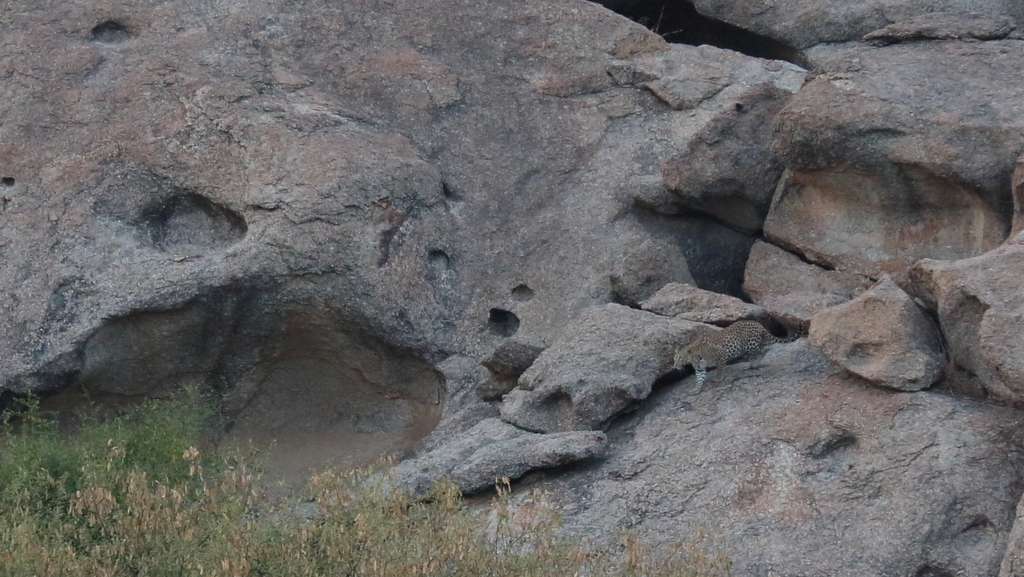 I found it to be a very graceful & stately creature!​ 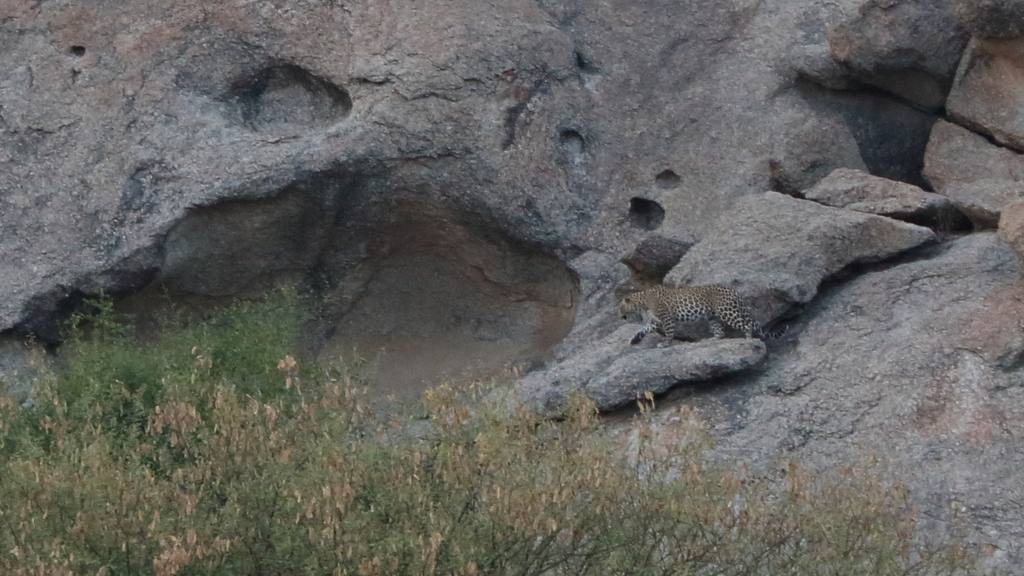 Soon the cubs too appeared & we saw all 3 of them for over half an hour. Then along came a hyena ... which the mom promptly chased away! Awesome!!!
Obviously I didn't get great snaps of all this as I didn't have a telephoto lens: my hubby had taken it on his Arunachal biking trip.
Though for me, seeing is far more important ... so I was really happy!​ 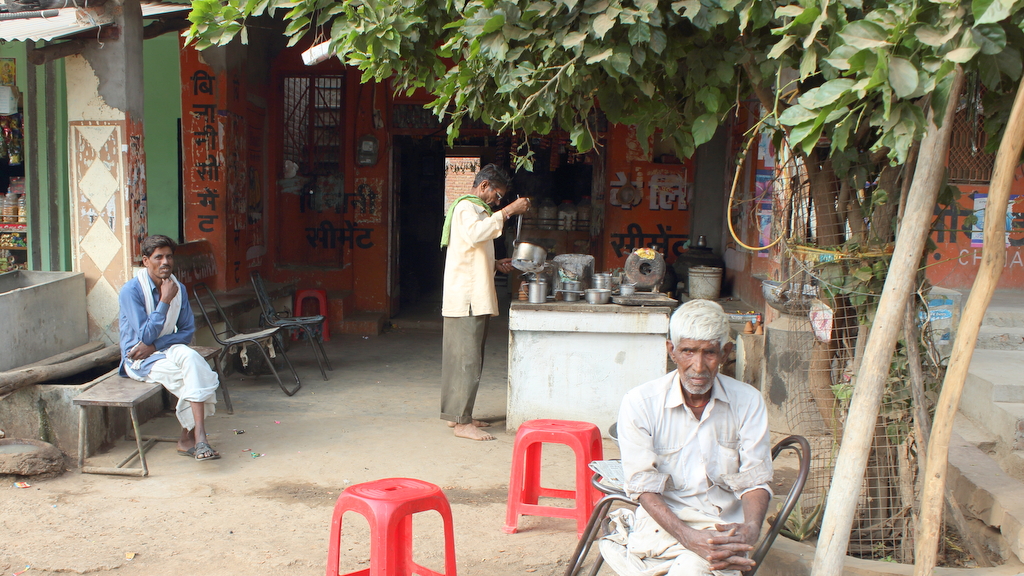 The way back to Udaipur: 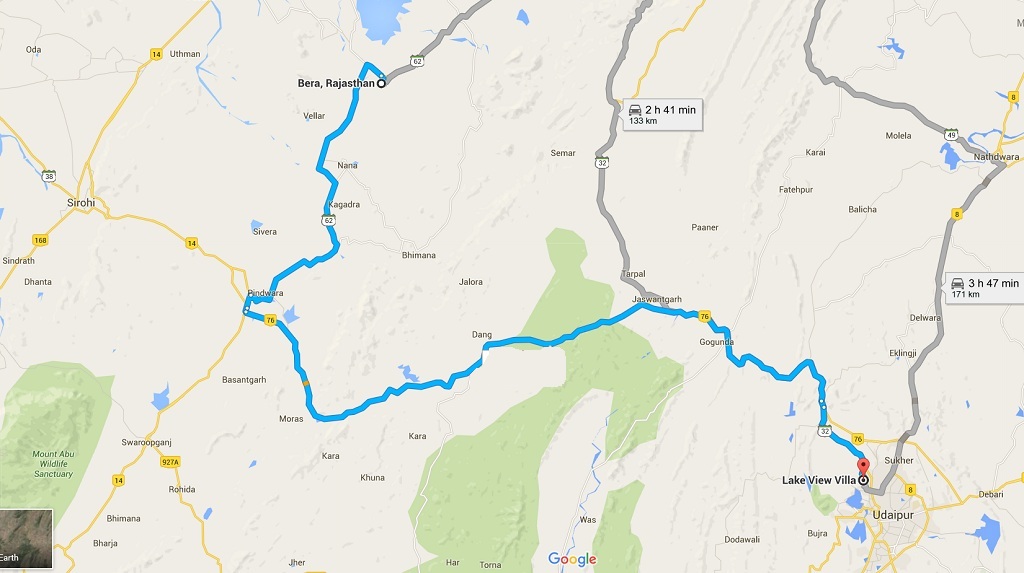 The route we took​
We started at 11:45 a.m. The route we took had narrow roads till Pindwara & it took us an hour to get there. The road was lined on both sides with cotton & castor oil plants. Then we joined the 4-lane highway all the way to Udaipur. Fantastic roads.

It took us 3½ hours to reach the Lake View Villa hotel. We didn't feel like using Here maps anymore & took the directions from Gaffar ji. 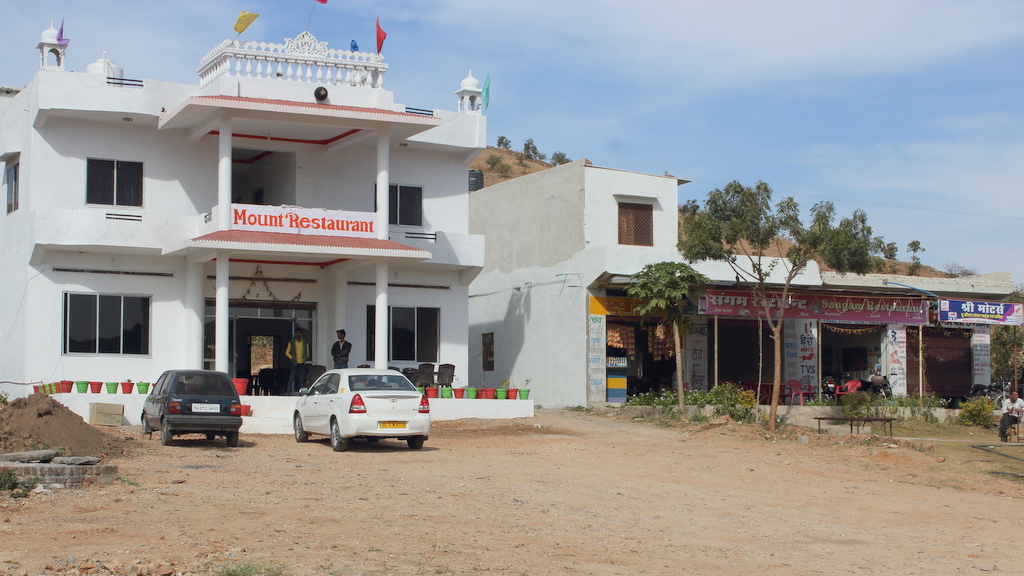 Pit stop on the highway
​ Back to where we started. Same room & same view as the beginning!​
I requested the CarzOnRent guy to come & pick up the car from the hotel itself at 4 pm. You see, we had very important work on the last day & didn't want to be disturbed or distracted!
We now had to go shopping!!!

Mrs. Singh at Lake View Villa was quite helpful in suggesting us places for shopping at Hathi Pol. It was cool stuff!!!

The next day we took an Indigo flight & returned back home to Mumbai!

The experience of us girls going alone was quite wonderful & I would love to do it again!

Lucky you for sighting on complimentary Safari. Great ending.

Pricing of the accommodation would obviously change according to the season, their pricing policy etc.

I love the sense of humor. I think I would also get down and ask the locals just as you did. Like Gaurav pointed out..you are fine story teller. All the pictures are beautifully taken. Very interesting read.

agree to the story teller comment here im in sync with everyone. not everybody knows the art of story telling its as if things come live with the narration and most of them might have felt that they are there. keep up the good work and if you can provide tuition in the narration ill be a student. i have been after this art for long jotting down things and explaining it is not an easy task.