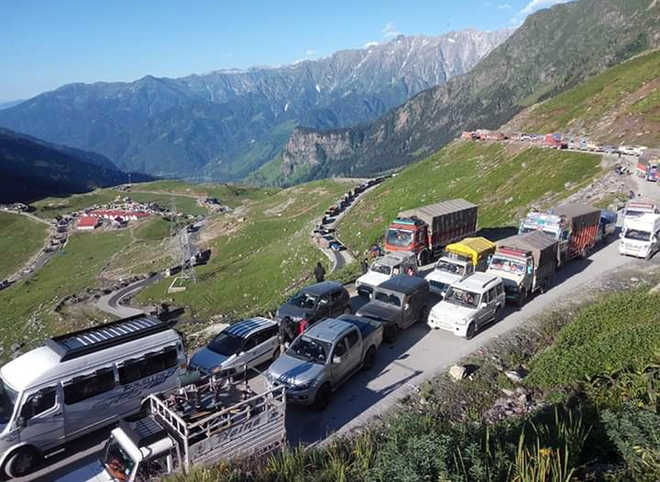 Vehicles stuck in a jam on the Manali-Keylong highway. file photo

Mandi, August 25
Frequent landslides on the Manali-Leh highway for the past few days are adding to commuters misery. Tourists are being stuck in long traffic jams. Many have been forced to spend sleepless nights inside vehicles in the region.
The worst point is Banta Mod beyond Marhi towards Rohtang where the Border Roads Organisation has restored the road thrice since Monday. The area is prone to landslide, which requires widening of the road.
A massive landslide was reported again on Wednesday night, blocking traffic between Manali and Rohtang. A large number of vehicles were stuck the whole night. A majority of people had to spend night inside their vehicles without having food. Those travelling with children were the worst sufferer.

Agriculture Minister Ram Lal Markanda also took strict note of the situation and asked the Kullu administration to widen the road immediately.
Manali SDM Amit Guleria said, “The road was restored in the morning and traffic jam had been cleared. We are planning to widen the road at Banta Mod.”

That's the plan. A couple of days in Manali, a day in Shimla and Chandigarh each and then back home to Mumbai.

adsatinder said:
Congrats !
You reached safely at Manali.
Enjoy at Manali too.
Click to expand...

Stones are falling at Rohtang ! Can we take Shimla~Kaza-Leh Route on Sept 11 ? Is the Kaza and Kunzum pass cleared ?

Can we take Shimla~Kaza-Leh Route on Sept 11 ? Is the Kaza and Kunzum pass cleared ?
Click to expand...

Most probably, Yes.
Monsoon will be subsided by 1 September in Himachal Pradesh.
Western Disturbance can come anytime.
Keep eye on Weather News.
Kaza & Kunzum are open.
Ahead is in worst conditions now.
You can cross with precaution and it will take time to pass via Gramphoo Section.
R

Can we take Sach Pass route to leh in 2nd week of September ? Also is own camping allowed in Chamba & Killer ?

Can we take Sach Pass route to leh in 2nd week of September ? Also is own camping allowed in Chamba & Killer ?
Click to expand...

Rains are going to be much less by then.
It is possible if there is clear weather and pass is ok to go.
But there is no guarantee.
It may be delayed if something happens. Get ready for that too.

You can ask land owners and camp nearby inhabited areas only as wild. Life is also going to keep eye on you.
LOL !
State nearby a Dhaba etc to be on safer side.
Be in a group only.

Prefer to stay at Bairagarh to reach Killar on time and choose camp site in sunlight only.

Reached pathankot via Srinagar leh route. The highway is fully safe. Indian army is deployed heavily on highway. You can return from leh on this route.
Don't enter any villages or Srinagar if you want to use this route. Stay on highway till you cross Jammu, This is what army men strictly recommended. It was pleasant route compared to Manali route except the road till udhampur which is quite damaged and there's is lot of truck movement along with dirt.
Note that 90%all shops and hotels are closed on this route till ramban. Keep your tanks full and carry back up fuel if you really want to take this route. Message me for further instructions.
We took this route because we suffered a lot in Manali route and we didn't wanted to miss sonamarg. Some of the routes are

tiresome and it gets boring combined with land slides.
Had a nice trip so far.
Images below are few km after Srinagar entry road. It was a busy road with heavy convoy moment every now and then. Army is working very hard to keep the situation under control. Huge respect and thanks to their efforts .
Ride safe.

adsatinder said:
Check weather report of Manali to Leh regularly and keep eye on news.
Forget Srinagar - Leh route for this season.
No outsider is allowed to enter Kashmir Valley via Udhampur or from any other side.
Click to expand...