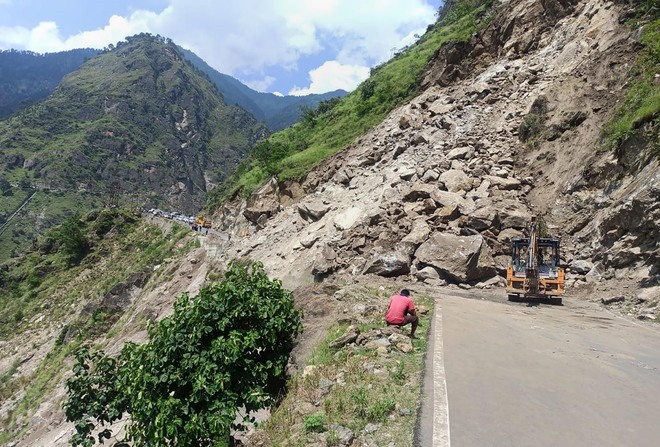 The National Highway-5 was blocked for vehicular traffic near Jeori in Rampur subdivision of Shimla district following a landslide on Monday morning. However, no casualty was reported as there was neither any vehicle nor any person on the stretch when the landslide occurred.
The slide took place 3 km ahead of Jeori towards Nugalsari (Kinnaur), where 28 persons were killed in another landslide on August 11. Local residents blamed the hydro power projects for frequent landslides in the area.
Yadvendra Pal, Rampur SDM, said, “Three JCB machines have been deployed on both sides to clear the highway and 50 per cent of the work has been done. One-way traffic is expected to be restored by tonight, if the shooting stones do not disrupt the ongoing clearing work”.

A large number of vehicles were stranded on both sides of the road as there was no way to divert traffic, while small vehicles were being stopped in Jeori. 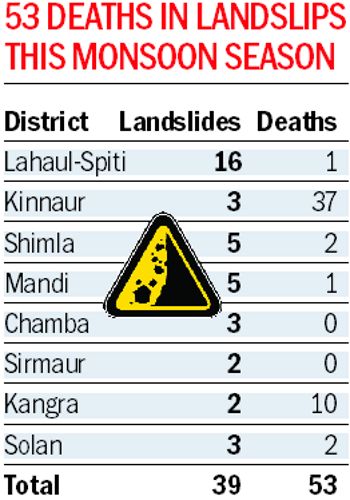 Till now, 53 persons have lost their lives in 39 landslides during the current monsoon (since June 13). The maximum casualties were reported in Kinnaur district (37) followed by Kangra (10), Solan and Shimla (two each), Mandi and Lahaul and Spiti (one each).

As per the data shared by the Disaster Management Cell of the Revenue Department, the highest number of 16 slides occurred in Lahaul and Spiti district, five each took place in Mandi and Shimla, three each in Solan, Kinnaur and Chamba while two landslides each in Sirmaur and Kangra districts.

Any latest update on road status for Shimla to Kaza and further Chandertal.

It is all OK like earlier.
After Rains, some areas deteriorate naturally.
Some Patches are bad but manageable.

What is the latest on Sach Pass and Cliffhanger road?
Has anyone been on the road recently?

dichkaun said:
What is the latest on Sach Pass and Cliffhanger road?
Has anyone been on the road recently?
Click to expand...

Yes.
BCMTians are doing this
Better do before snowfall closes the Sach Pass.

Cliffhanger Road also done by many.
I don't have details on it.

It is almost OK.
Chandratal is also Open but will close soon.
Last edited: Oct 7, 2021

adsatinder said:
Yes.
BCMTians are doing this
Better do before snowfall closes the Sach Pass.

Cliffhanger Road also done by many.
I don't have details on it.
Click to expand...

Thanks. Will try going tomorrow.

dichkaun said:
Thanks. Will try going tomorrow.
Click to expand...

People are still planning both these days to do it as soon as possible.

On Tuesday snowfall possible.
Snowfall can happen between 9am to 3pm on Sach Pass and Cliffhanger Road.
Cliffhanger Road is not in good condition but you can manage it on good ground clearance wheeler or bike.

Snowfall possible between 9 am - 3 pm on Tuesday at and around Sach Pass: 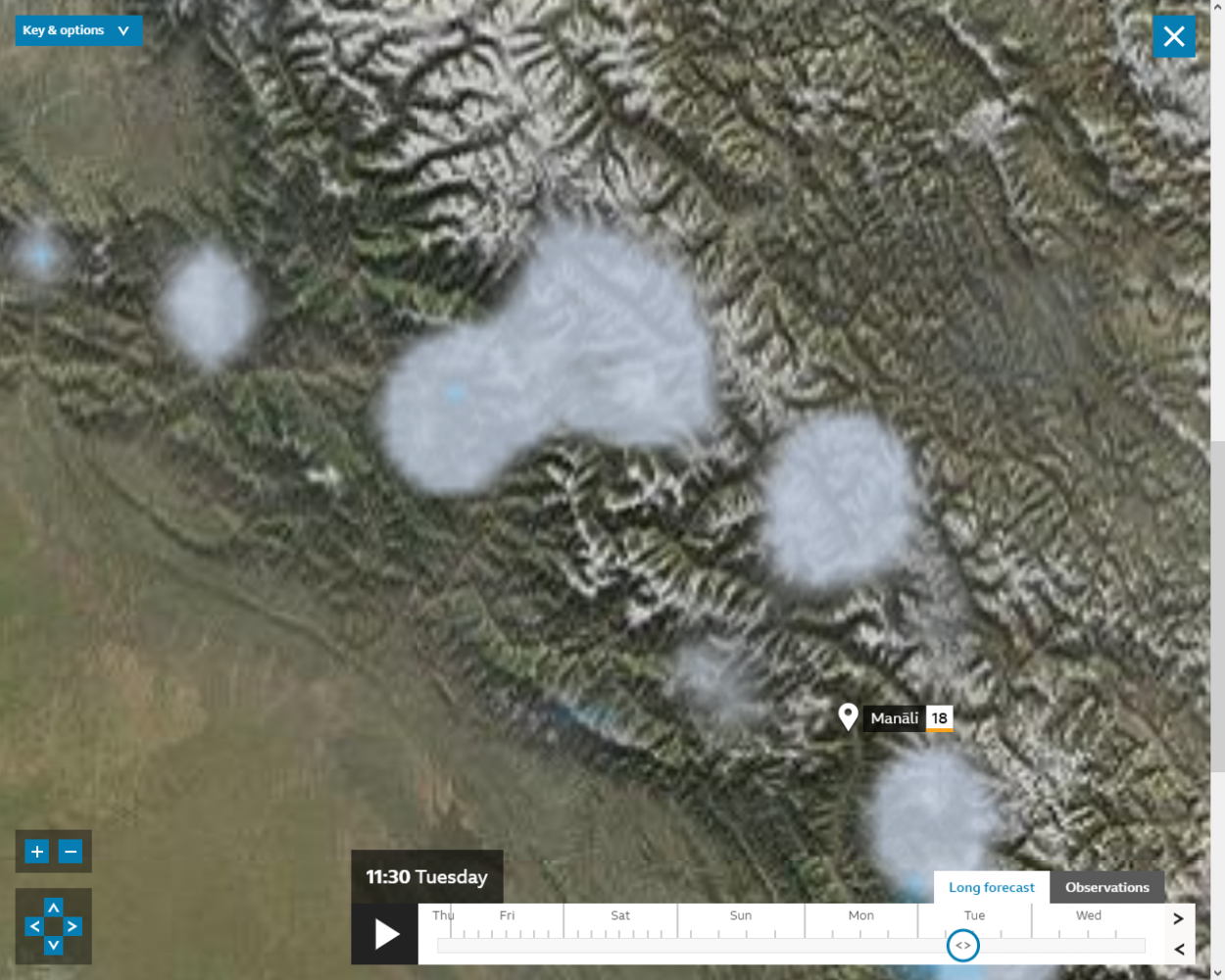 adsatinder said:
You can find latest information on the road conditions / Requirements of Lahaul, Spiti and Sach Pass (Pangi Valley) in 2021. We will also keep this thread update with the news of tentative opening dates of Rohtang Pass, Kunzum La, Chandertal, Sach Pass & other Himachal Pradesh Roads. So make sure to subscribe to this thread for regular updates.


RTPCR -ve Report - Required from 4 August 2021
RTPCR Required to enter Himachal Pradesh : YES
ePass Required : YES
Hotels check this even if they do not stop you at border.

URGENT !!
Hi Satinder ji, I just now saw this post of yours. We are leaving for Himachal Pradesh to morrow. The information I got from Hotel Chail Palace, where we are going to spend our first night in H.P. is that no e-pass or test report is required now. Could you please check and confirm this because, as per your post, these are required. Thanks for your kind help.
You must log in or register to reply here.
Share:
Facebook Twitter Reddit Pinterest WhatsApp Email
Top