You can find all the information you need on the road status and opening dates of the Manali – Leh Highway in 2021. So make sure to subscribe to this thread for all the updates.

You can move via Atal Tunnel / Rohtang Tunnel only towards Lahaul / Leh side.
It is allowed if weather is favourable to go.
If there is No snow / No skidding road conditions are there,
only then they allow tourist traffic towards Lahaul Valley.

All passes on from Manali-Leh Road NH 003 are red. Friends from Media are requested to inform and educate the persons who are willing to travel to as well as return from Leh to other parts of the country. They may contact Ladakh Police regarding status of Zoji La Pass(Srinagar-Leh) National Highway 001, and plan travel accordingly.

Traffic movement won't be restored for atleast one week on Manali-Leh highway as 38+ vehicles which includes 32 trucks are stuck on Baralacha Pass.

Manali leh highway status is red you must google it before going.

The highway is open via Atal Tunnel, Rohtang is still not completely cleared. All the other passes are opened.
You have to get a RT-PCR test done to enter Himachal Pradesh and Ladakh. So time your trip so that you would need to do only 1 RT-PCR test, which will work for both the borders. Artigen test will also be done at the Ladakh border. The rules are same for vaccinated and not vaccinated travelers.

Is the highway open in September and October also?

September yes, October is a big doubt, as the later passes - from Manali, starts receiving snowfall. However, Srinagar-Leh highway may remain open for traffic until October end or early November.


Tourists will be allowed visit Rohtang Pass via Gulaba from tomorrow 14 th .June onwards. The permit will be issued manually by SDM office Manali. Only local taxies allowed for conveyance of the tourists. No private car / conveyance will be permitted. May inform all guests staying in hotels / tourism units accordingly. Movement to Rohtang Pass will be from 9 AM to 6 PM subject to weather conditions.

Rohtang Pass in Himachal opens to tourists
Only local taxis allowed, permits to be provided manually 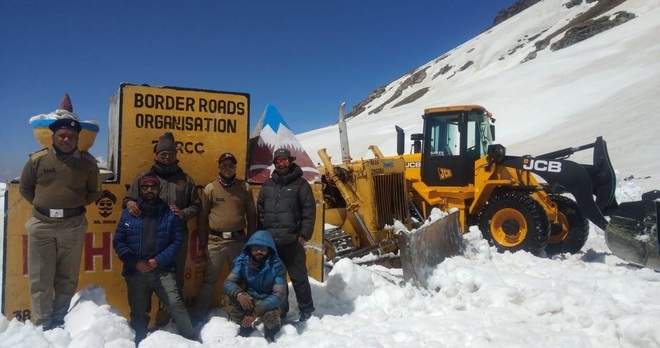 BRO personnel after clearing the snow at the Rohtang Pass on May 29. - File photo

Tourists will be allowed to visit the Rohtang Pass only through local taxis from today.
Manali SDM Raman Gharsangi said permits to cross the Gulaba barrier would be provided manually by the administration. The online permit system would be resumed once tourist traffic increased. He said the road condition of the pass would be reviewed after some time and tourist vehicles also be allowed after the conditions become suitable.

The SDM said tourists would be allowed to cross the Gulaba barrier after 9 am and they would have to reach back by 6 pm. The permitted time for visitors would depend on weather conditions. Since there were a few visitors at present, the vehicles would be allowed to return from Rohtang-Manali road.

When the number of vehicles increased, they would be sent ahead on the Rohtang-Koksar road to return from the north portal of Atal Tunnel from Lahaul side to avoid traffic jams.
Gharsangi said the commercial activities as per the guidelines of the NGT would be allowed. The eco-friendly market in Marhi would also be opened for the convenience of tourists. They would have to follow the corona guidelines.

Rohtang is a world-famous tourist destination. The tourists enjoy various adventure activities in the snow, besides the scenic view. The livelihood of a large number of people is depend on the tourist influx.
As per sources of the tourism department, around 400 tourist vehicles were daily crossing the green tax barriers set up before Manali. The tourist arrival started gaining pace from June 2 and is expected to increase as the government has relaxed the requirement of the RTPCR report for tourists to enter Himachal.

Some hoteliers said online permits to visit Rohtang Pass should be provided to avoid crowding.

A huge influx of tourist vehicles was witnessed at the inter-state barriers in Parwanoo today, following easing of restrictions in the neighbouring states.
With mercury rising in the plains, tourists are heading for the hills to beat the summer heat. Residents of the neighbouring Punjab, Haryana and Chandigarh, particularly, are arriving in large numbers.

Yogesh Rolta, DSP, Parwanoo
5,000 vehicles enter parwanoo
A rush of tourist vehicles has been witnessed since Friday evening with nearly 5,000 vehicles having entered through Parwanoo as against about 3,000-3,500 vehicles registered last week.
Most of the vehicles going uphills were lined up at the barrier on the national highway near Timber Trail Resorts. The other one located near Kalka on the state highway saw fewer vehicles comparatively.

Tourists entering the state are required to register themselves on the Covid e-pass software and these passes are scanned by police officials deputed at the barriers.
“An overwhelming rush of tourist vehicles has been witnessed since last evening with nearly 5,000 vehicles having entered through Parwanoo as against about 3,000-3,500 vehicles that were registered last week,” said Parwanoo DSP Yogesh Rolta. He added that additional staff had to be deputed at the barrier to scan the e-passes in view of the huge influx.

Since e-passes are scanned by the police at the barriers, a long queue of vehicles created a traffic chaos. Vehicles bound for the hills had lined up in multiple queues spread across kilometers.
The rush left traffic staff, who were scanning all passes, exhausted. Those entering the state without passes had to be manually registered, which further added to the work.

Staff at the Sanwara-based toll plaza also confirmed that about 1,500 to 2,000 more vehicles had entered the state this weekend in comparison with last week. “The vehicle influx has increased tremendously this weekend in comparison with last week as tourists are heading for the hills to beat the summer heat,” said Balwinder Singh, project in-charge, GR Infra Projects, which is four-laning this highway.
Hoteliers received a big boost with their occupancy reaching 50 to 70 per cent in the last fortnight at Kasauli. Rocky Chimni, vice-president, Kasauli Residents and Hoteliers Association, said, “Tourist influx, especially during the weekends, has gone up to 70 per cent and it will improve further as the condition of getting an RT-PCR test report for tourists has been done away with. Rates have been lowered by 20-30 per cent to lure tourists.”

Toll worth Rs 2,08,220 has been collected at Parwanoo inter-state barriers in the last 24 hours, which was much higher than last weeks’ collection, said the excise and taxation staff.

Not wearing face masks in Himachal may attract eight-day imprisonment and Rs 5,000 fine
First time offenders to be fined Rs 500 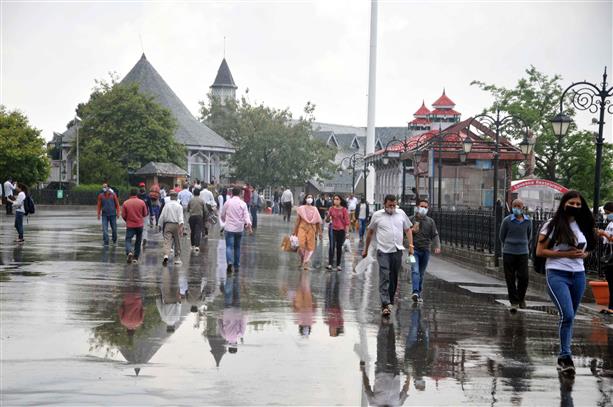 
Bhanu P Lohumi
Tribune News Service
Shimla, June 14
Following the opening of state borders for tourists without RT-PCR negative report, Himachal Pradesh Police on Monday issued an advisory asking the tourists to wear face masks, maintain social distance and follow Covid guidelines or face action.
“We welcome all the tourists entering the state and advise them to abide by the norms. However, the violators would attract a fine of Rs 500 at first instance and repeat offenders would be arrested and may be sentenced to eight days imprisonment or fine of Rs 5,000 or both as per the provisions of the HP Police Act," the advisory cautioned.

There has been a surge in tourist arrival in Shimla and as many as 5,000 vehicles entered Shimla through Shoghi border in 36 hours from June 12 (8 am) till June 13 (8 pm) while the data for today is still awaited.
People were fed up due to lockdown and curfew and want to breathe fresh air and those who have been vaccinated or survived Covid-19 are looking for an outing.

Moreover, people in the plains are rushing to the hills of Himachal to get relief from sultry heat.
The occupancy on this weekend touched 30 per cent which is further expected to go up to 60 per cent in the coming week.

About 25 per cent online bookings have poured in while 25 per cent tourists are walk in, says president of Shimla Hotel and Restaurant Association Sanjay Sood.
“We have appealed to the hotel owners to abide by the standard operating procedures (SOPs) like wearing of masks, proper sanitisation and avoid overcrowding so that tourists feel safe and comfortable,” said president, Tourism Industry Stakeholders Association MK Seth.

The tourism industry which suffered heavy losses in peak summer season in 2020 and 2021 are hopeful that with relaxation on restrictions, industry would be able to cover up the losses to some extent.
After a long gap, the Mall and the ridge was abuzz with activity as tourists strolled at these places.

Shimla is a beautiful place with ideal weather and the tourists can enjoy and roam, however temples are still closed, said Richa Jain, a tourist from Delhi who was given a mask by the Shimla police after a monkey snatched her mask.
“We were anticipating tourist inflow after the restrictions were lifted and ten reserves have been deployed in the district (seven for corona curfew and three for internal mobilization) besides 200 police personnel on traffic duty as flow of traffic has also increased. Police patrolling parties are on the ground to guide the tourists,” said SP Shimla Mohit Chawla.

With tourists from neighbouring states heading in hordes to Himachal Pradesh, particularly Shimla, Kullu-Manali and Dharamsala, on the first day of the state opening its borders to outsiders without the mandatory RT-PCR negative report, the police have warned the visitors against flouting the Covid safety protocol. 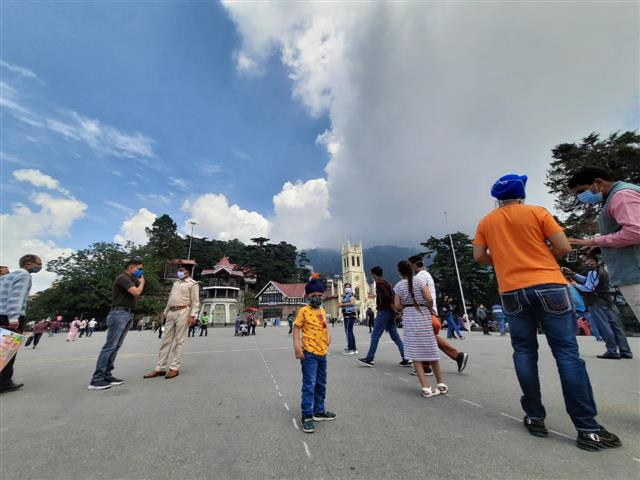 
A heavy rush of tourists was witnessed on the Ridge and The Mall Road in Shimla. The police also slapped challans on a few violators.

Urging the tourists to strictly follow the Covid SOPs, Shimla Superintendent of Police Mohit Chawla said they had challaned some people on The Mall Road. He warned of eight-day jail in case of repeated violations. 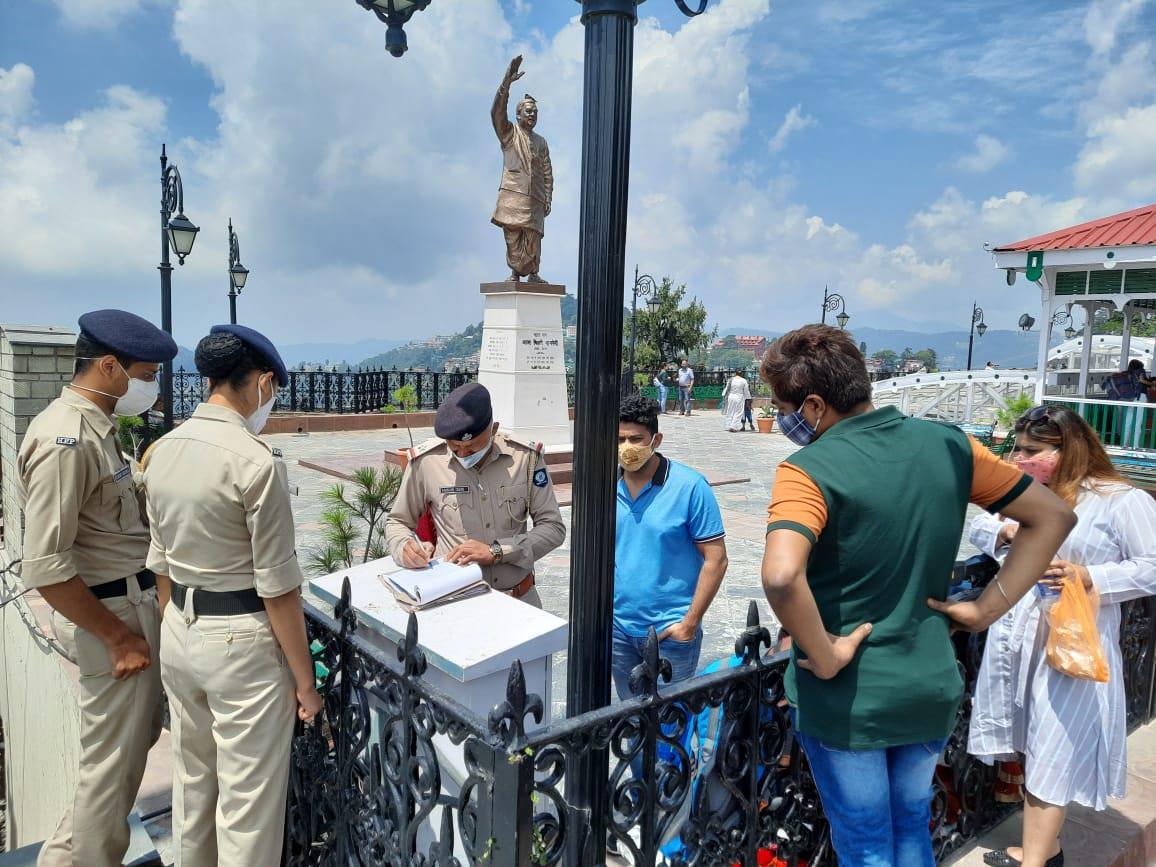 The occupancy on this weekend touched 30 per cent which is further expected to go upto 60 per cent in the coming week. About 25 per cent bookings have been done in while 25 per cent of tourists are walk in, says President of Shimla Hotel and Restaurant Association Sanjay Sood.

He said people in the plains were rushing to the hills of Himachal to get relief from sultry heat.
“We have appealed to the hotel owners to abide by the standard operating procedures (SOPs) like wearing of masks, proper sanitization and avoid overcrowding so that tourists feel safe and comfortable,” said President, Tourism Industry Stakeholders Association MK Seth.

The tourism industry, which suffered heavy losses in peak summer season in 2020 and 2021 are hopeful that with relaxation on restrictions, industry would be able to cover up the losses to some extent.
Prior to June 14, the state government had allowed the entry of only those tourists who had prior booking at a hotel or homestay and carried a Covid negative report from an ICMR-accredited laboratory.