As per information,NH003 Manali-Leh and NH505 Manali -Kaza Road has been closed due to fresh snowfall at Baralacha Pass and Kunzum Pass for all types of vehicles.
No vehicles are allowed towards Leh from Darcha and towards Kaza.

Avoid traveling on these routes to avoid any kind of mishap.

Manali-Leh road to close from November 2 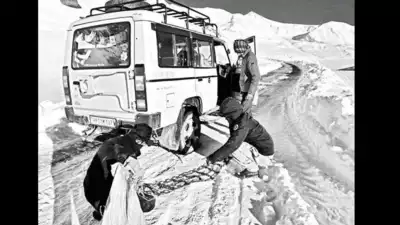 MANALI: The civilian vehicles will no longer be able to ply on the 428km-long Manali-Leh highway for the next few months as it will officially close from November 2 due to high risk of road mishaps. The highway is now expected to open in April or May next year.
Vehicles are struggling to move on the slippery highway these days. Also, there is a prediction of more snowfall from November 2. So, taking precautionary measures, the Lahaul-Spiti administration on Sunday decided not to allow any vehicle to go towards Sarchu and Leh. The Gramphu-Kaza highway will also be closed for all vehicles officially from November 2.
Lahaul-Spiti deputy commissioner Neeraj Kumar said both the highways will remain closed till next summer season. “Civilian vehicles will not be allowed to go beyond Darcha on the Manali-Leh highway. It’s too dangerous for civilians to drive on this road under extreme cold conditions which have triggered icing of the road surface. Keeping in view the risk of getting stranded in snowfall, possibility of avalanches and skidding on icy roads which may result in human loss, the vehicular movement will be stopped now,” he said.
The DC said Gramphu-Losar stretch of the Keylong-Kaza highway will also be closed for traffic movement from November 2 so that any mishap could be averted. “Police will ensure strict compliance of the order. People entering Lahaul valley via Atal tunnel should follow the advisory issued by district administration from time to time. Avalanches and slippery roads make things worse. Those who don’t have experience of driving on snow should take extra precaution.”
The Manali-Leh highway shall remain open for Army convoys for a few more days until heavy snowfall makes it impossible for Border Roads Organisation (BRO) to clear snow from the road. Many stretches of the road, especially on high passes including Baralacha pass, are still covered with a thin layer of snow even after BRO had removed snow from here and are unsafe for driving. These steep stretches are very difficult for vehicles to negotiate even after using snow chains on the tyres. The military convoys have four-wheel-drive trucks with anti-skid snow chains and required back-up. Civilian vehicles, including trucks, cars and SUVs, face trouble getting traction on slippery roads. And there are many tourists who insist on driving on this dangerous road without any experience. The Lahaul valley will remain open for civilian vehicles up to Darcha. The snowfall, however, may interrupt movement beyond Atal tunnel.
The Manali-Leh highway has been blocked with snow since October 17 and was opened only for four-wheel-drive vehicles on October 28. As there were a large number of other vehicles stranded in Lahaul and Leh, the highway was opened for one-way traffic on Saturday.
Lahaul-Spiti SP Manav Verma said, “The Manali-Leh highway was opened for one-way traffic from Darcha on Sunday. All 76 stranded vehicles have been sent to Leh. These include 59 heavy vehicles and 17 light vehicles. The vehicles had 136 passengers. People are requested to keep an eye on the weather forecast and adhere to safe winter driving habits.” 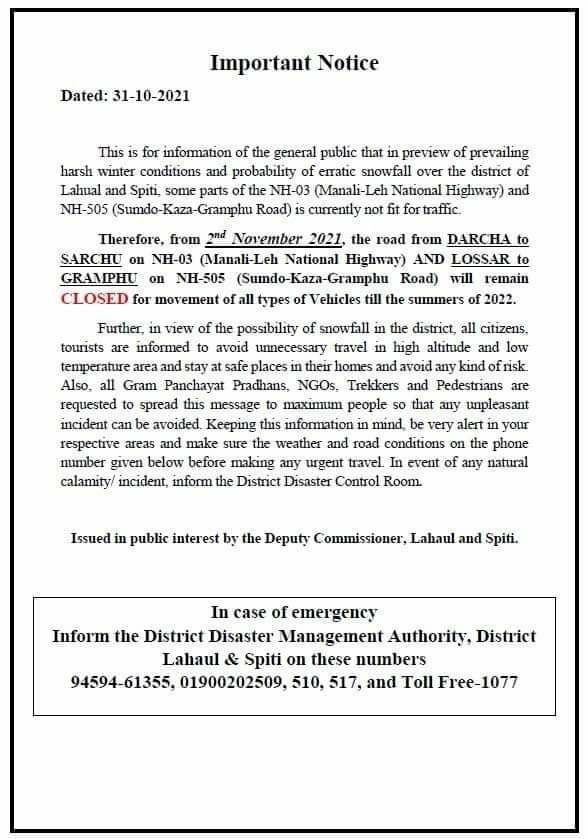