In a way, this year has been the year of the joker, or rather, the guy with no plan. With 7 trips done already this year, pretty much all without any plans, I was looking at my 8th trip of this year and 8th trip to Ladakh, without any plan whatsoever. I wasn’t even sure how we were going to travel, once we got there, and to make matters all the more confusing, Neha and KP were taking it even more lightly.

Couple of weeks before the trip, I knew there was no way we would be renting out motorcycles, barring maybe for local sightseeing. With a supposed strict budget, I thought we might just take a bus to Nubra as well. All this meant, even though I called Rigzin and told him I would be coming to Ladakh on 21st September, I couldn’t give him any plans to work with or even a rough estimate about the number of days we would need him.

No hotel bookings were done, since KP had to have an English toilet with jet, and I wasn’t sure if Otsal had one. And since we were on a budget trip, we couldn’t book anything online either.

While return flight from Srinagar were booked for 2nd of October, I was fairly certain, I wouldn’t be taking it. Since there was no point really going to Kashmir, it’s not like I ever really liked that place, now with protests taking place and scant possibility of photography, I lost whatever little interest I had in it. KP wished to keep it as an option, since flight tickets could be cancelled till 2 hours before takeoff, with full refund.

As it always happens, I was running from one place to another, right before the trip and packing got done on the 11th hour. With luggage bags swelling from 1 to 2 bags and 2 camera bags in tow as well.

With an hour and a half of sleep, it was time to book an Uber for airport and say goodbye to my family.

Neha and KP too started from their Gurgaon home around the same time, and while I reached around half an hour before them to airport, they too managed to reach well before the scheduled departure.

Checking in luggage took its sweet time, and got delayed a little more, when we were informed by Go-Air ground crew that we had to carry all the spare batteries and power banks in cabin luggage. Earlier one had to place batteries in check in luggage and hence I had packed them in the same manner, and now due to this new rule, I had to take them out, and place them in KP’s backpack.

Once at security check I had to take out all my camera gear for scanning, thankfully this time around I had packed it in a manner, which didn’t take too much time or effort to take gear out for scanning.

Once past security, we decided to head to food court for breakfast.

While munching on cold and somewhat tasteless KFC burgers (not sure why airport outlets serve bad food), we got a call from Go-Air, informing us that boarding for the flight had begun.

Walking and eating, we made our way towards the gate and made it on the flight, with plenty of time to spare.

With budget airlines charging extra for not only window seats, but also aisle seat at time of web check in, we had booked the last row seats, since these were the only seats which allowed us to sit together, without paying 500 bucks extra to Go-Air. When we made it all the way back to the last row, we came to know why these were without any extra charge. There was no window in the last row! Thankfully 2 rows ahead of us were completely empty, and while I took window seat in third last row, Neha and KP took the second last row. 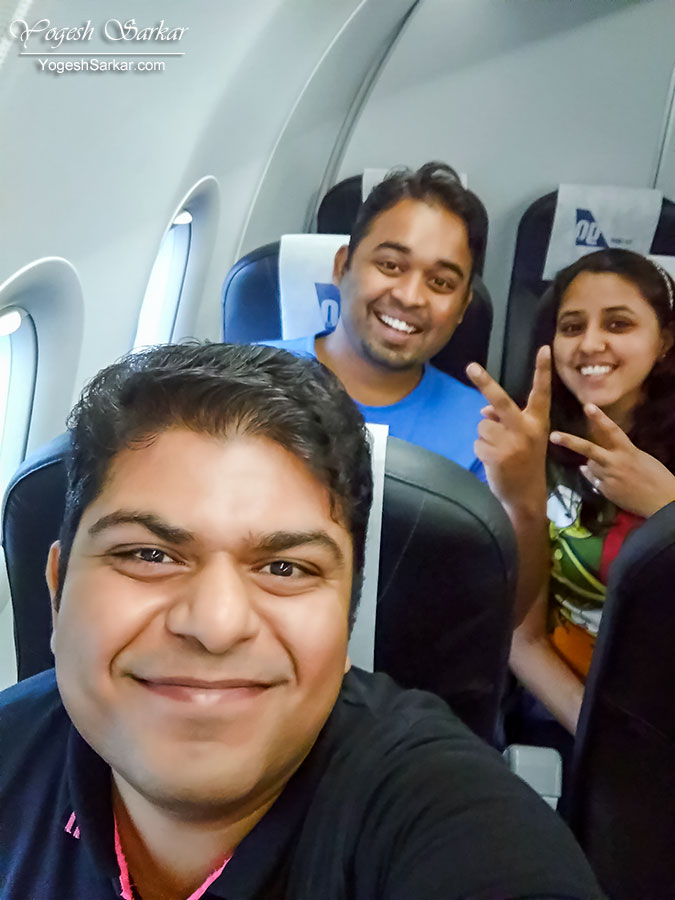 15 minutes later, our flight took off and we left Delhi behind. A little while later, Neha and KP dozed off. Both of them had slept for couple of hours in the night, and were dead tired. Half an hour later, we were cruising above Zanskar Range and I decide to wake both of them up, and seeing the beauty of the landscape we were flying over, both of them were awake for the rest of the duration of the flight. 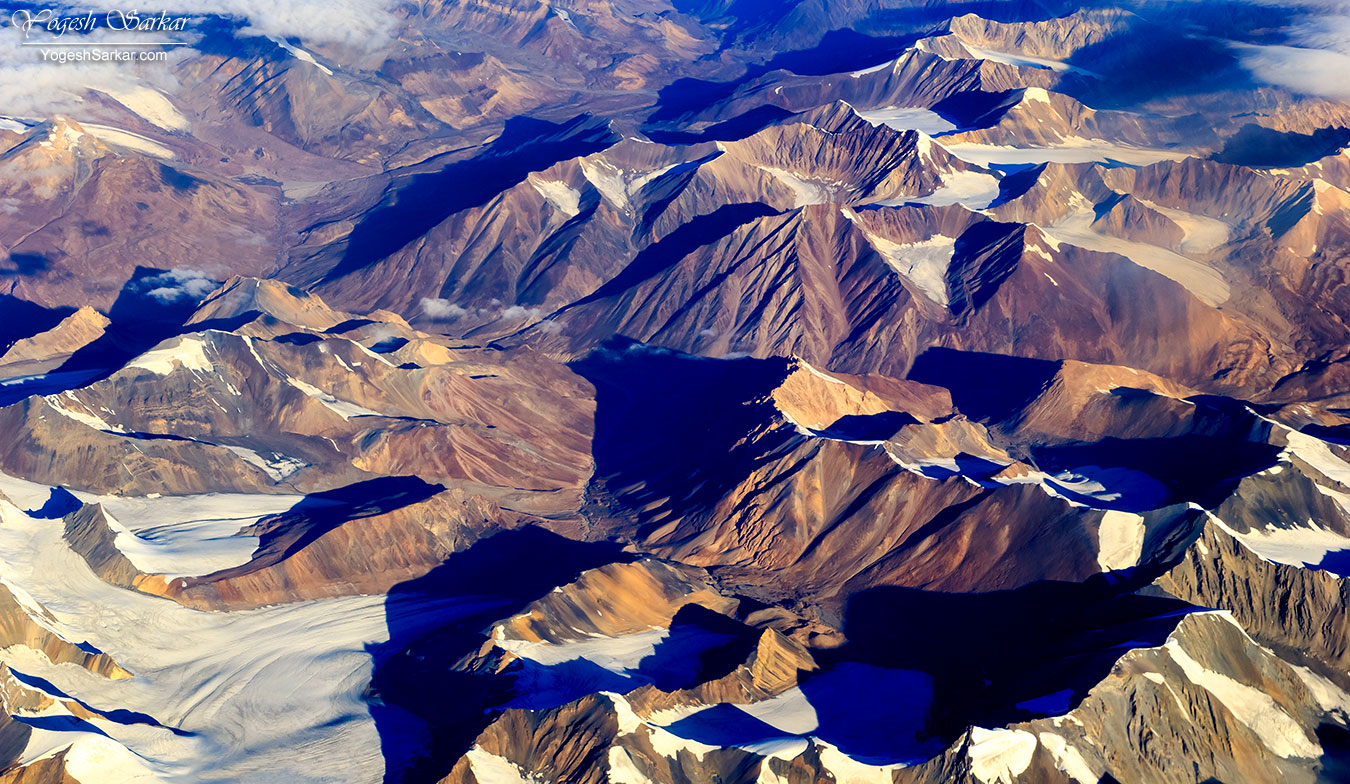 We landed at Leh airport around 8am and after picking up our luggage we headed outside and started looking for driver, Rigzin had sent, to drop us to the hotel. However no one was there, so I called Rigzin, who has in Nubra at that time and he told me driver would be there soon.

Half an hour later, driver arrived in an Eeco. He was stuck on the airport road in a traffic jam, due to a cycle race taking place.

We got in, and headed for Otsal Guest House. As soon as I got off from the taxi in front of the guest house, I was greeted by the warm voice of Otsal, standing on the street. I asked him if the room I took last year was available, and he nodded in affirmative.

KP and I went along with Otsal to check out the room, sadly for Neha and KP, while it had English toilet, there was no jet. So KP settled for the room on the ground floor, while I got my old room back . 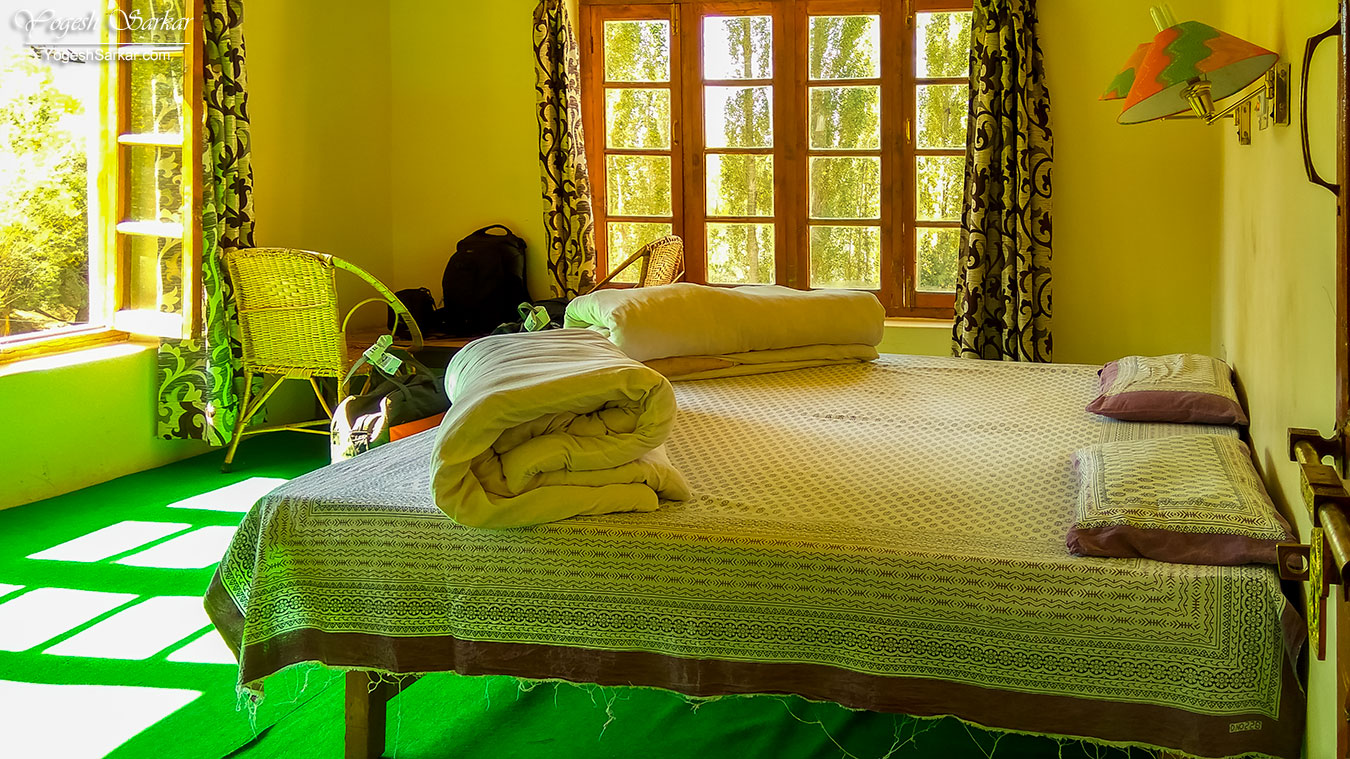 KP was feeling sleepy and wasn’t hungry, so he decided to catch up with some sleep, while Neha and I went to Yama Café for food. Ever helpful dogs of Yama Café helped us finish our delicious breakfast. 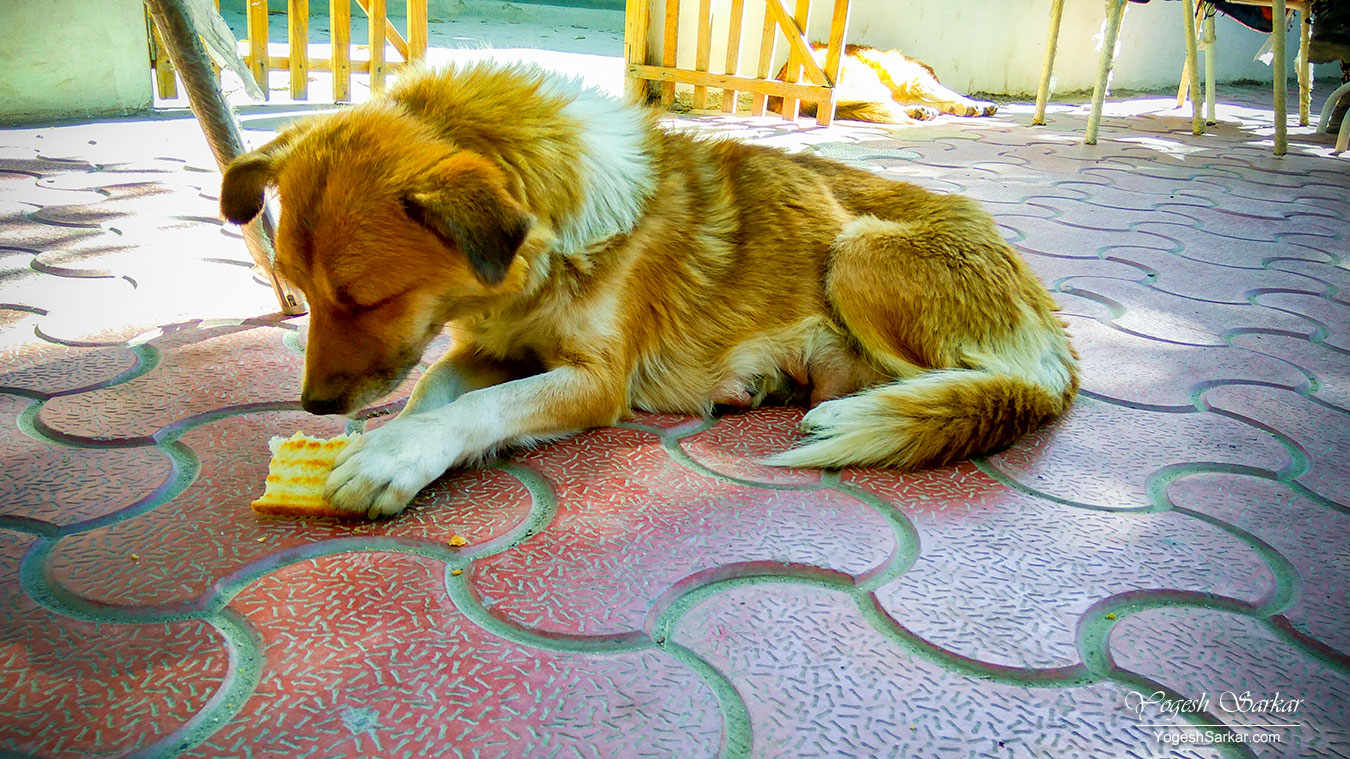 After coming back to the guest house, Neha too decided to catch up with some sleep, while I loitered around for a while and eventually slept for half an hour.

Later in the afternoon, we decided to walk to the main market to buy a few things and get some food.

When we got to Leh Main Market, I was surprised to see construction had finished and it had become a no-vehicle zone, exclusively meant for shoppers. While the market looked beautiful, it also represented the growing popularity of Leh as an up and coming hill station.

First stop was Neha Snacks in main market, after waiting for 15-20mins we got a table and while samosa and chole were alright, they were a little cold and attitude of owner and staff even colder. Guess this is one place which has truly lost its charm, and has become just another small eatery in plethora of eateries in Leh.

After this we picked up a small disposable oxygen cylinder for Rs. 450 and a few other things. Sun had started to go down and we went in search of a place to sit and spend rest of the evening at. While we got just the right place in terms of views, food options were somewhat limited and Neha was feeling cold, sitting outdoor on a roof. So we decided to move on from there. 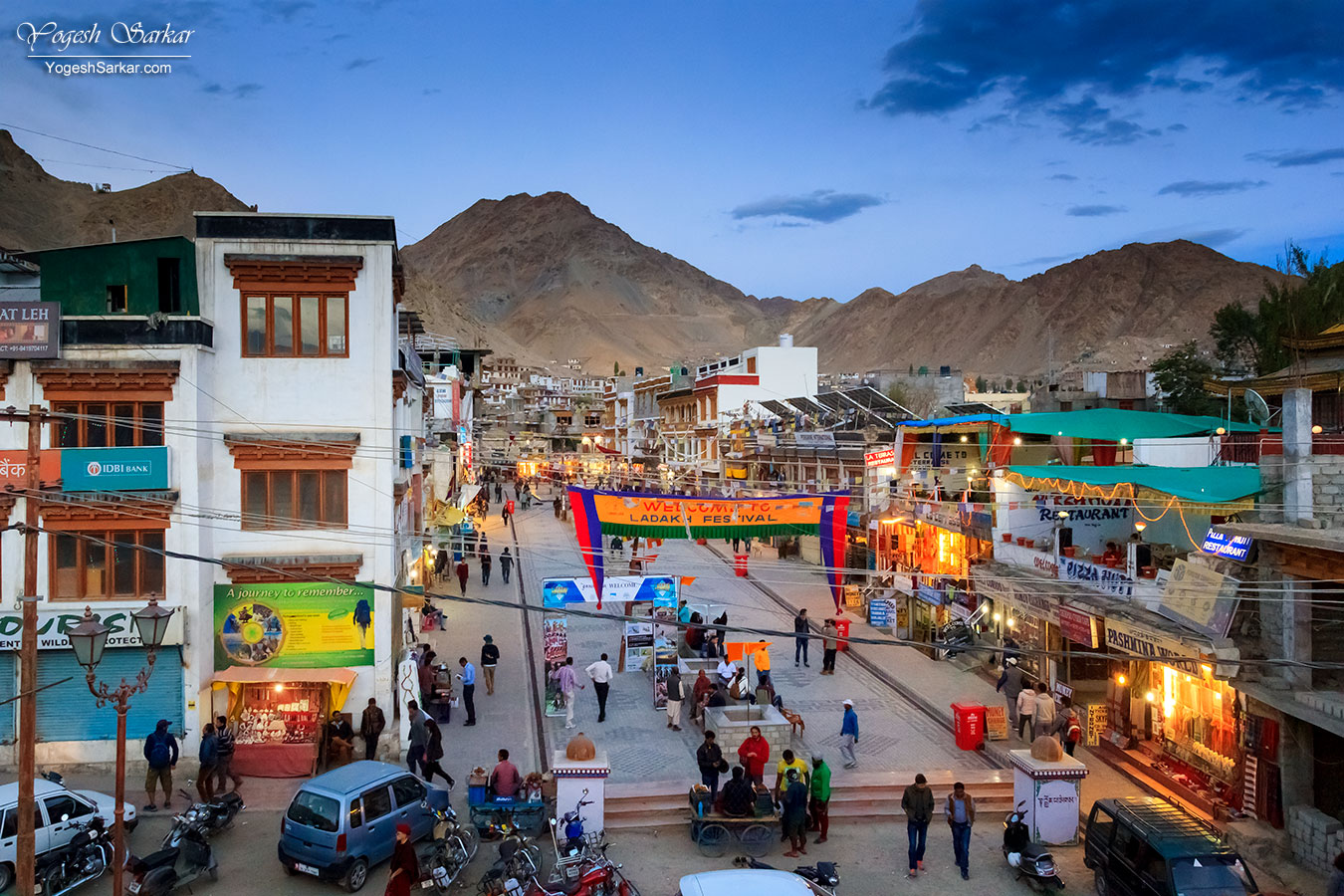 While on foot I tried to locate Gesmo German Bakery, but for some reason, I couldn’t recall its name or location, and eventually took a shortcut through Tibetan Craft Market to Changspa Road. 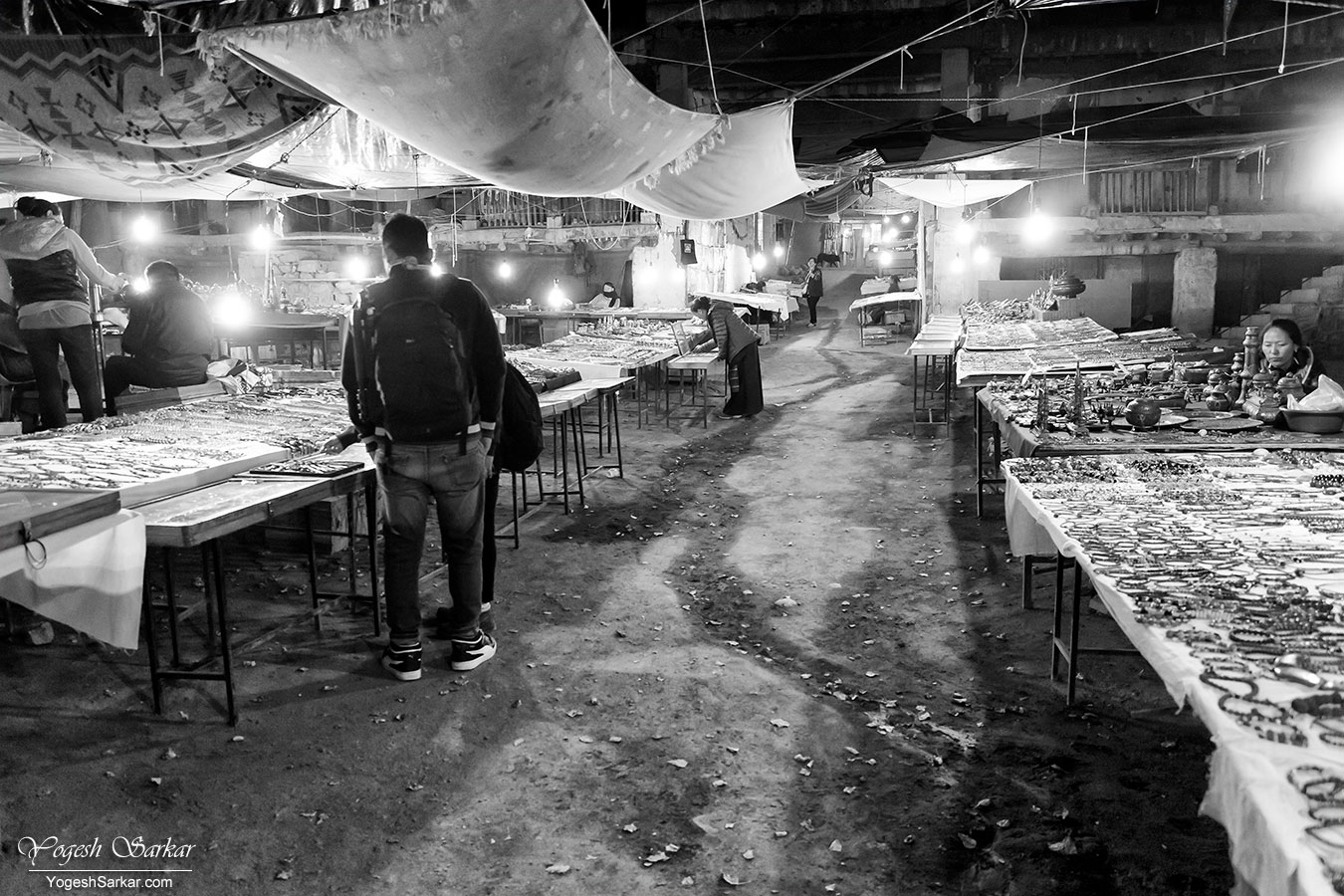 Which brought us near La Piazzetta garden restaurant and we decided to check it out. Ambience was wonderful and song collection, superb. On top of it, restaurant staff was courteous and helpful; there was even a central bonfire to provide a little bit of heat in the falling temperature. However food wasn’t that good, be it mushrooms or coffee. However we thoroughly enjoyed the time we spent there. 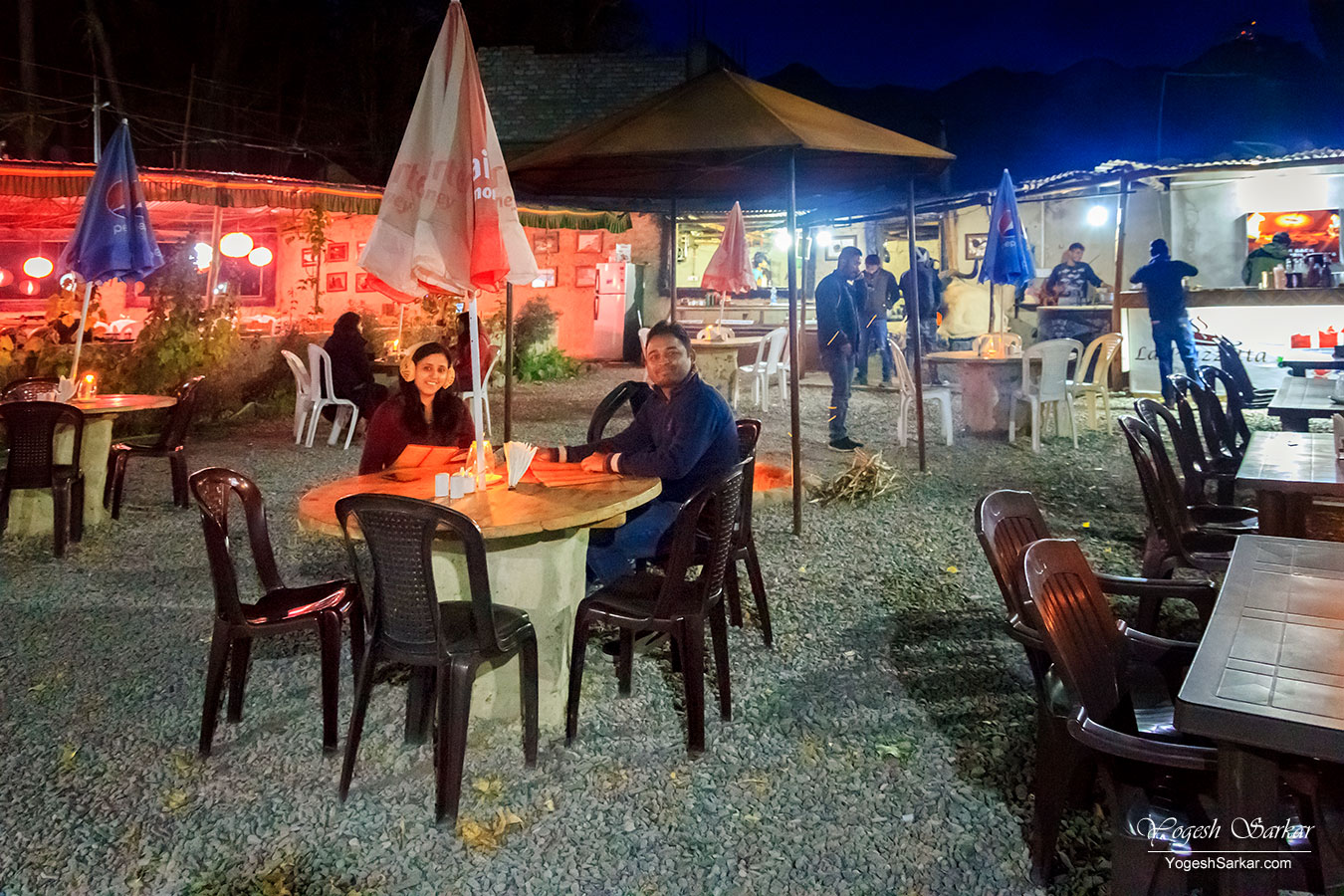 After spending a little over an hour there, we decided to head back to Otsal, en route I spotted Wonderland Restaurant and Coffee House and we went in there. Last year in July, I had come to this place with Vishal, to try out Hello from the Queen, a sundae or sweetdish if you will, which was simply delicious. This time around, I decided to order Hello from the King, which is just like Hello from the Queen, except the fact that it has a brownie on top. 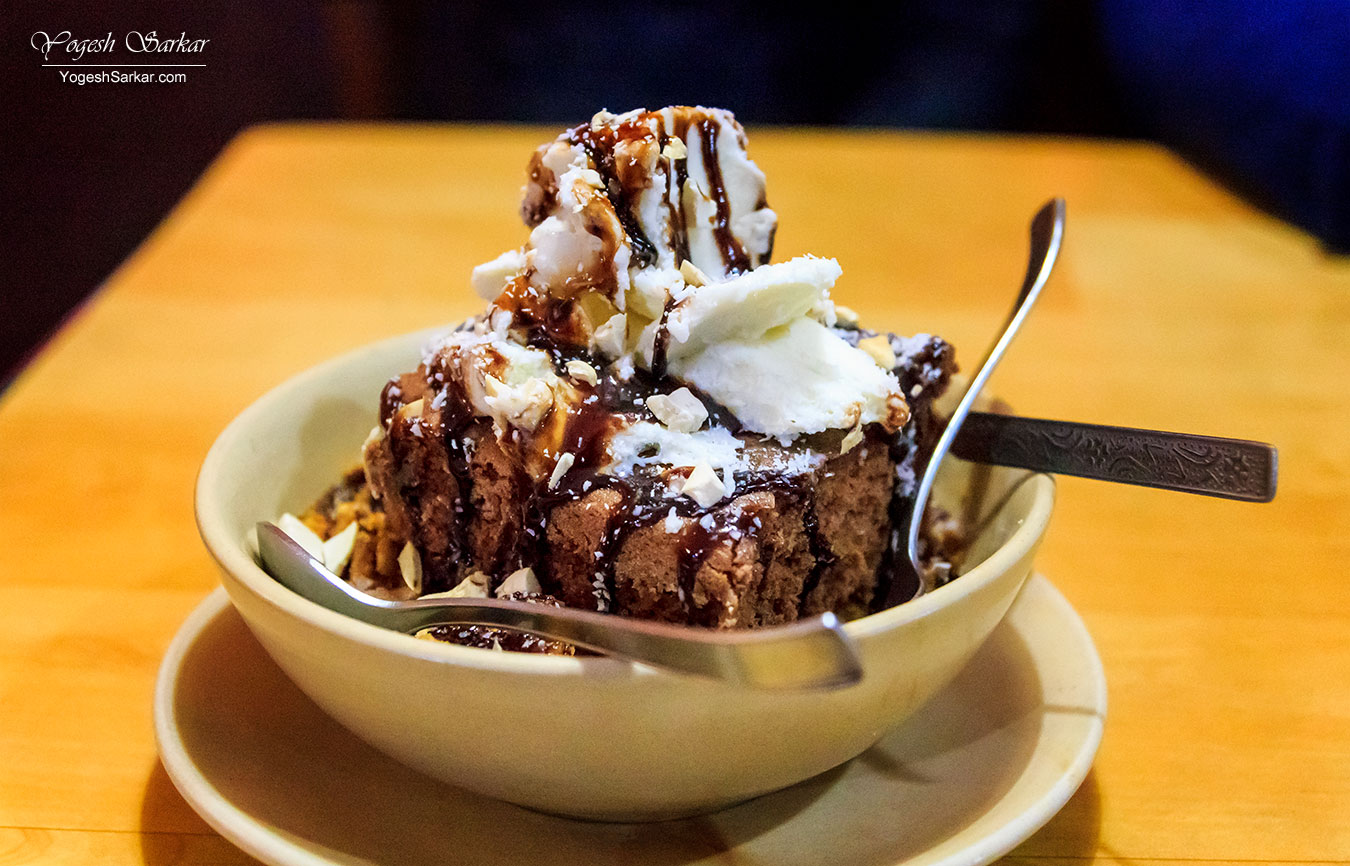 It was delicious. Even though brownie wasn’t that great and I guess Hello from the Queen would have been a better bet due to it. Neha also ordered chowmein, which too was delicious. After this we headed back to Otsal Guest House and watched a movie, before deciding to go to sleep, even though we had to wake up early tomorrow, for sunrise at Shanti Stupa…

Click here to read day 4 and 5 of the travelogue ->

I was waiting for this log.
thank you @Yogesh Sarkar ji
I Must say Beautiful pictures
really amazing, specially the second picture is really amazing

Wonderful start as ever...
Waiting for more...

Thanks, everyone, appreciate your comments.

Thanks Suneesh, will be posting the next part tomorrow.