A Brief History of Motorcycles

The invention of the motorcycle closely followed the development of the bicycle and the four-stroke gasoline engine. German inventor Gottlieb Daimler created the first motorcycle in 1885. 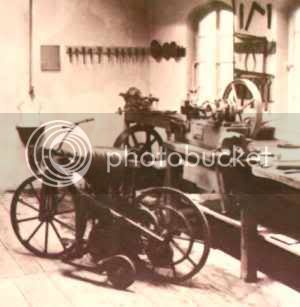 He attached a four-stroke gasoline engine to a wooden bicycle frame and added two extra side wheels for stability, similar to training wheels on a bicycle. Daimler?s engine turned the rear wheel with a pulley.

Various models were introduced in Germany, France, and Britain in subsequent years, each attempting to turn the motorcycle into a practical means of transportation. In 1903 American inventor William Harley, his neighbor Arthur Davidson, and Davidson?s brothers Walter and William built the first Harley-Davidson motorcycle. A year later Harley-Davidson began manufacturing motorcycles for sale. In 1909 Harley-Davidson introduced the first V-Twin engine, which had two cylinders arranged in a distinctive ?V? angle. 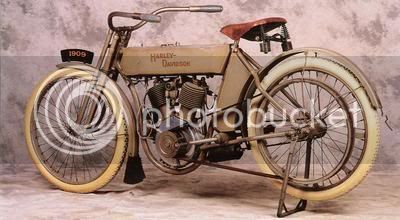 By 1914 the basic layout of the modern motorcycle was established. This layout featured an engine located between the front and rear wheels and a chain to transfer power from the engine to the rear wheel. During World War I (1914-1918), motorcycles proved a reliable source of transportation for American and European military forces negotiating war-damaged roads and carrying communications to forward positions. Following the war, the use of motorcycles spread rapidly in Europe and the United States.

Through the 1950s most of the motorcycles in North America were manufactured by Harley-Davidson or by British manufacturers, such as the Birmingham Small Arms Company (BSA), Norton, and Triumph. But during the 1960s and 1970s, Japanese manufacturers, including Honda, Kawasaki, Suzuki, and Yamaha, began to introduce motorcycles that had improved engines and suspensions capable of outperforming their American and English counterparts. Powerful inline four-cylinder 750 to 1200 cc engines in Japanese motorcycles soon dominated the street motorcycle market, while their 250 to 500 cc two-stroke engines virtually ruled the market for off-road motorcycles. The highly competitive Japanese manufacturers soon forced most of the English companies out of business. Harley-Davidson almost went out of business as well, but the company was saved from bankruptcy by a special U.S. import tax placed on Japanese motorcycles over 750 cc.

In the 1970s many U.S. states and Canadian provinces adopted helmet laws that required people to wear protective headgear when riding a motorcycle. The helmet laws proved very unpopular with many cyclists and were overturned in some states. The controversy continues today over who should decide whether riders wear helmets. Advocates of helmet laws believe that the government has the right to compel riders on public roads to wear helmets. Opponents argue that this decision should be left entirely to the individual.

In the 1980s some high performance motorcycles with ?turbocharged? engines were introduced. A turbocharger uses hot exhaust gases to spin a small turbine blade. The spinning blade pushes more air and fuel into the engine, boosting its power output significantly. In the 1990s fuel injection replaced carburetors on some engines for easier starting, improved fuel economy, and reduced emissions.

Rajat thanks for this, indeed an interesting read. Making this topic a sticky
R

111 Horses in the Stable

suprisingly not many responses

I am surprised that there are too many responses to this thread. Great thread. Maybe we can discuss landmarks in motorcycle development.

Had seen such a program on Discovery some time back. They started with a 2 wheeler predating the cycle as well . As in it was like cycle just that there was nothing between the 2 wheels. Not even the pedal and chain. The rider just sat on the contraption and used his legs to push the ground back to move forword.

Hehe. Exactly!
Guess such a car did not come up as modern humans are not as strong as the Neanderthals
N

In my country, people still use motorbikes the most. It is Vietnam. Do you know? There are a lot of motorbike brands in Vietnam such as: Honda, Yamaha, Atila, Vespa... and every year, they innovated their products to be more convenient, stylish and nicer. In Vietnam, Vespa is considered as the most luxurious vehicle.

What a lovely blog, I would love to join you some day for a ride.
Keep in touch, Have a safe ride..

Had seen such a program on Discovery some time back. They started with a 2 wheeler predating the cycle as well . As in it was like cycle just that there was nothing between the 2 wheels. Not even the pedal and chain. The rider just sat on the contraption and used his legs to push the ground back to move forword.
Click to expand...