For the X’mas vacation of 2015, the initial plan was to go somewhere far away, outside Karnataka. But plan A did not work out somehow. So here was the plan B – why not visit some nearby places of Karnataka that we have been postponing visiting for years. A day before the visit, we decided, our 2/3 days journey would start with Shravanabelegola, then on to Shringeri through Belur and Halebeedu.

Up above the world so high

So, early one morning towards the close of 2015 we hit the road, me - the driver, Subha – my wife as the mentor and Dipayan - our 13 year old son as the official navigator.

Our first destination was Shravanabelagola which is about 160 kms from Bangalore.

As I learn that some years back the statue of Gommatesvara at Shravanabelagola was voted overwhelmingly in a Times of India poll as the first of the seven wonders of India, I wonder, “how come I have missed such a wonderful site even though I have stayed in Karnataka off and on for over 10 years.”

Belagola means white pond and shravakas are Jain seekers. As the place is famous for both, it is named as Shravanabelagola. There is a beautiful pond- even though no more white- in the middle of the town which is flanked by two hills Vindhyagiri and Chandragiri.

On Vindhyagiri stands the majestic monolithic 57 feet high statue of Gommatesvara. There is no alternate to climbing barefoot or with socks the 650 odd steps to reach the sacred footstep of Lord Gommatesvara. Of course there are palanquin bearers for those who cannot climb. To reach the top, it takes a leisurely half an hour. There is no need to hurry. It would be better to take frequent breaks not only to stabilize breath, but also to appreciate the surrounding views as you climb.

As you climb up the Vindhyagiri Hill you can have a bird’s eye view of the Shravanabelagola town and the Chnadragiri Hill across the town. It is here at Shravanabelegola that the Mauryan Emperor Chandragupta Maurya lived the last years of his life after converting to Jainism. On Chandragiri hills are a number of memorials to various Jain monks and a temple.

While climbing up the hill, you have the feeling that you are rising above the mundane affairs of the world and the majestic statue standing high on the mountain radiating bliss is inviting you to rise above the worldly worries and obtain the peak of bliss and innocence.

As one reaches the top of the hill through the winding steps one cannot but stand in awe of the magnificent statue of Gommatesvara Bahubali. Let it not be identified with the fictionalized character Bahubali of the eponymous multilingual movie.

When the movie Bahubali was released it drew protests from the Jain Community. May be, I think rightly so, they feared that the movie will evoke wrong associations and ideas concerning Jain History which is already misrepresented on many accounts by the scholars of Indian History.

On the rocks on both the hills are a large number of Kannada inscriptions that have survived the ravages of time for a thousand years. These have provided valuable information to the historians and archeologists. However to me what was of special interest was the story of Bahubali written on a large board.

The story of Bahubali

Bharat was highly ambitious. After subjugating 98 brothers he wanted Bahubali to surrender his kingdom. But Bahubali, which literally means the strong armed, would not consent. So war became inevitable. Fearing large scale devastation, the learned from both the sides, suggested a novel method - instead of the armies of both the sides engaging in battle, let there be a duel between the two brothers. Perhaps, it was keeping in line with the Jain principle of Ahimsa or where total Ahimsa was not possible to go for minimum collateral damage. Bharat was defeated in all the three rounds of the duel. But instead of being humbled, the defeat only infuriated him more and he sent his special weapon, known as Chakraratan – a wheel bestowed with magical powers, to kill Bahubali. To everyone’s surprise the weapon could not even touch Bahubali.

At first Bahubali was enraged. However, a sudden realization dawned on him and made him wonder about the futility of war and the craving for worldly gains. Thus, humbled in victory, Bahubali gave away his kingdom to Bharat and set on the journey of self-discovery. He engaged in deep meditation in the standing posture for such a long time that creepers grew over his legs. With a little help from Rishavdeb, Bahubali finally became enlightened.

Awestruck, as I climb down the Vindhyagiri, I cannot but agree with what the famous journalist Vir Singhvi had written in an article after visiting Shravanabelagola - “It is a sobering thought that around 500 years before Michelangelo created his David, Indian craftsmen had created a statue that is much more beautiful and far more impressive. ….. Long before the European Renaissance and long before the great structures of the medieval era – such as the Taj Mahal – were created, India had a cultural heritage that was the envy of the world”.

Every 12 years, the head anointing ceremony known as Mahamasthakabhisheka is performed in an elaborate ritual where in the idol is bathed in sacred liquids like sandal paste, milk, ghee, turmeric paste etc. The grand ceremony, that draws millions of people, culminates with the showering of flowers from a helicopter. The next one is scheduled to be held in February 2018.

The message of Gommatesvara Bahubali

Bahubali, the strong armed one, stands alone, naked, innocent and majestic radiating bliss and peace atop mount Vindhyagiri to announce to the world that to patronize non-violence requires unsurpassed strength. It is not a sign of meekness and weakness. Defeat need not always humble someone. Real victory is victory over one’s own negative tendencies and ignorance. 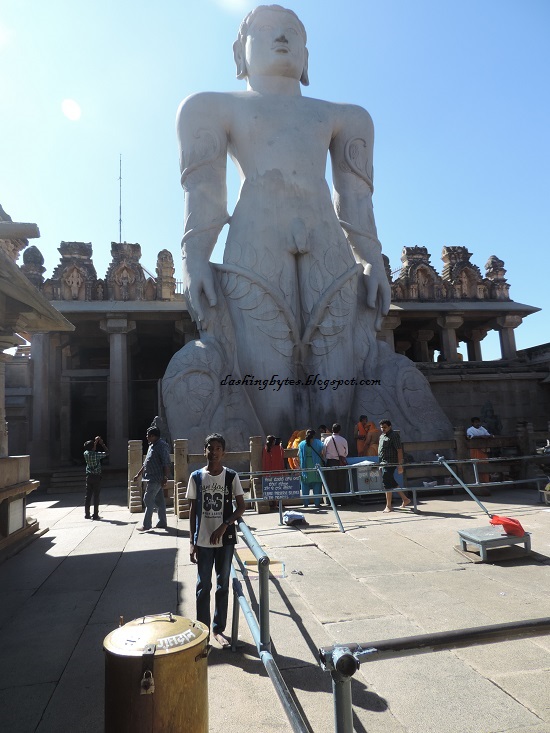 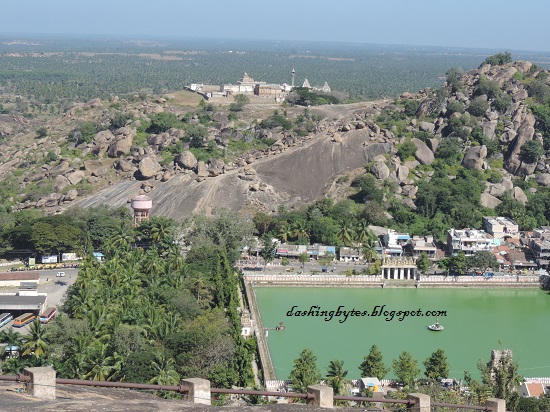