It's been a couple of days since I came back from my August trip to Ladakh in the month of August.

It has been the best trip in terms of photography, food, and mood, even though I didn’t push myself too hard nor did I explored any place, I hadn’t explored earlier.

Yet, it was special.

Because for the first time in my life, I was able to satisfy myself with my photography and even before I began to review or process the images I had shot, I knew, I had come back with what I always wanted.

That self-satisfaction is what has always eluded me, and this time, I have finally achieved it.

There were plenty of ups and downs in this trip and moment of complete disgust and utter annoyance, yet, it will forever remain, one of the most memorable trips of my life.

This trip has been in the works for far too long. Mansi and her brother wanted to travel with me to Ladakh, there were a couple of others as well, however, their plan never truly materialized. In the end, the three of us booked our flights to Leh for August in the middle of March.

However, as luck would have it, Mansi’s brother had to cancel his trip at the 11th hour due to a medical emergency at home.

Before the trip, I had tried to book Dorjeychubi Inder (+91-9906971501) for the trip. However, he was busy and while he offered to send a driver or his dad, I politely declined his offer, since I wanted someone I had traveled with earlier. So I decided to book Sonam Angdus instead, a decision I was to regret for the rest of my trip!

Apart from flight and taxi, I had only booked accommodation at Otsal’s Guest House.

As the day of the trip came nearer and it became apparent that Mansi’s brother won’t likely be able to make it due to a medical emergency at home. We began to worry about our budget, since both of us had limited funds available for the trip and with taxi cost (biggest expense of the trip) to be divided between two, instead of three, our budget had shot up quite a bit.

Rains were lashing Himachal Pradesh and we were supposed to take the bus back to Delhi. Eventually, we decided to book a flight from Leh to Delhi, thereby somewhat reducing our monetary requirement by using our credit cards and in turn, getting more time in Ladakh.

A few days before the flight to Leh, my health condition began to worsen with fever and what seemed like, another impending attack of bronchitis, which had kept me grounded for a couple of months, earlier in the year!

Things it seems were completely going awry, yet, the determination to see this trip through was strong as ever!

Fever and numerous household chores had left me completely exhausted by the time I got ready for my flight. Before I could book a cab and begin my journey to Ladakh. I had to celebrate Rakshabandhan with my sister. The real reason why I had chosen to fly on Monday, rather than on Sunday!

After Rakhi, it was time to book an Uber to the airport. However, destiny had something else en stored for me. The cab I booked got a flat tyre before it could reach me. The driver assured me he would fix the flat ASAP and be at the pickup point soon after.

Fixing the flat tyre took him well over 20 minutes and by the time I got in the cab and en route to the airport; I had begun to worry about missing my flight.

Thankfully, I managed to reach the airport with plenty of time remaining and met Mansi at the gate.

Checking in our luggage took a long time as well, since Mansi had put power bank in her checked in luggage, while it could only be carried in cabin luggage. She had to rummage through her bag and find the power bank, before we were allowed to check in our luggage.

We managed to reach our boarding gate before the boarding for the flight had begun. Though at the expense of not having breakfast at the airport, which I had initially planned to do. Just as well, since I had completely forgotten Vistara was a full price carrier and served meals during the course of the flight. 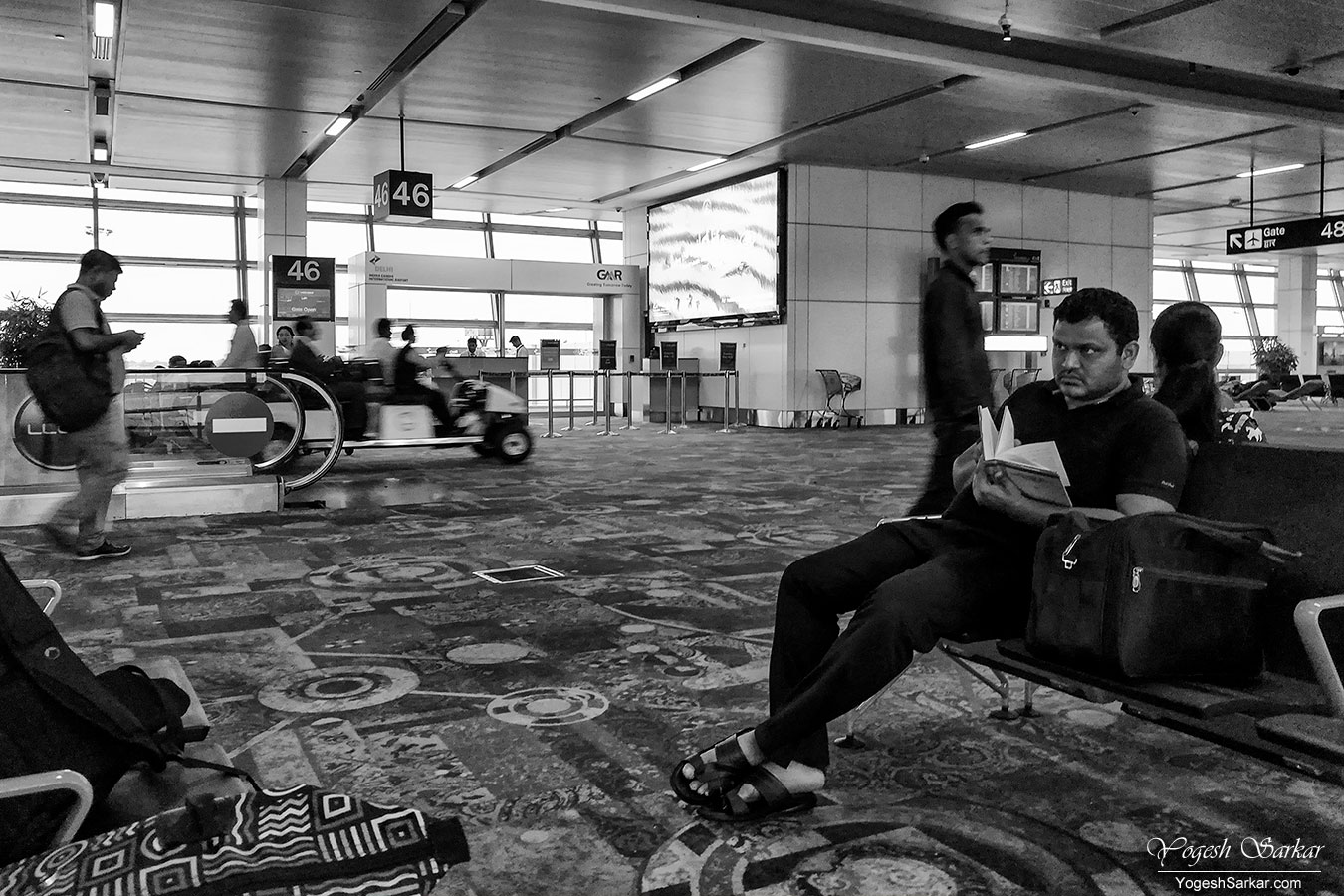 Around 7 am, we boarded our flight to Leh, which was scheduled to fly at 7:20 am. Only, it didn’t. It seemed Delhi sky was overly crowded today, and due to that, our flight got delayed by half an hour!

Eventually, we took off around 7:50 am and began our journey to the wonderland of Ladakh. Pilot assured us, he would try and make up for the delay. In the meanwhile, we got to view the cloud cover over Himachal and then, Zanskar. 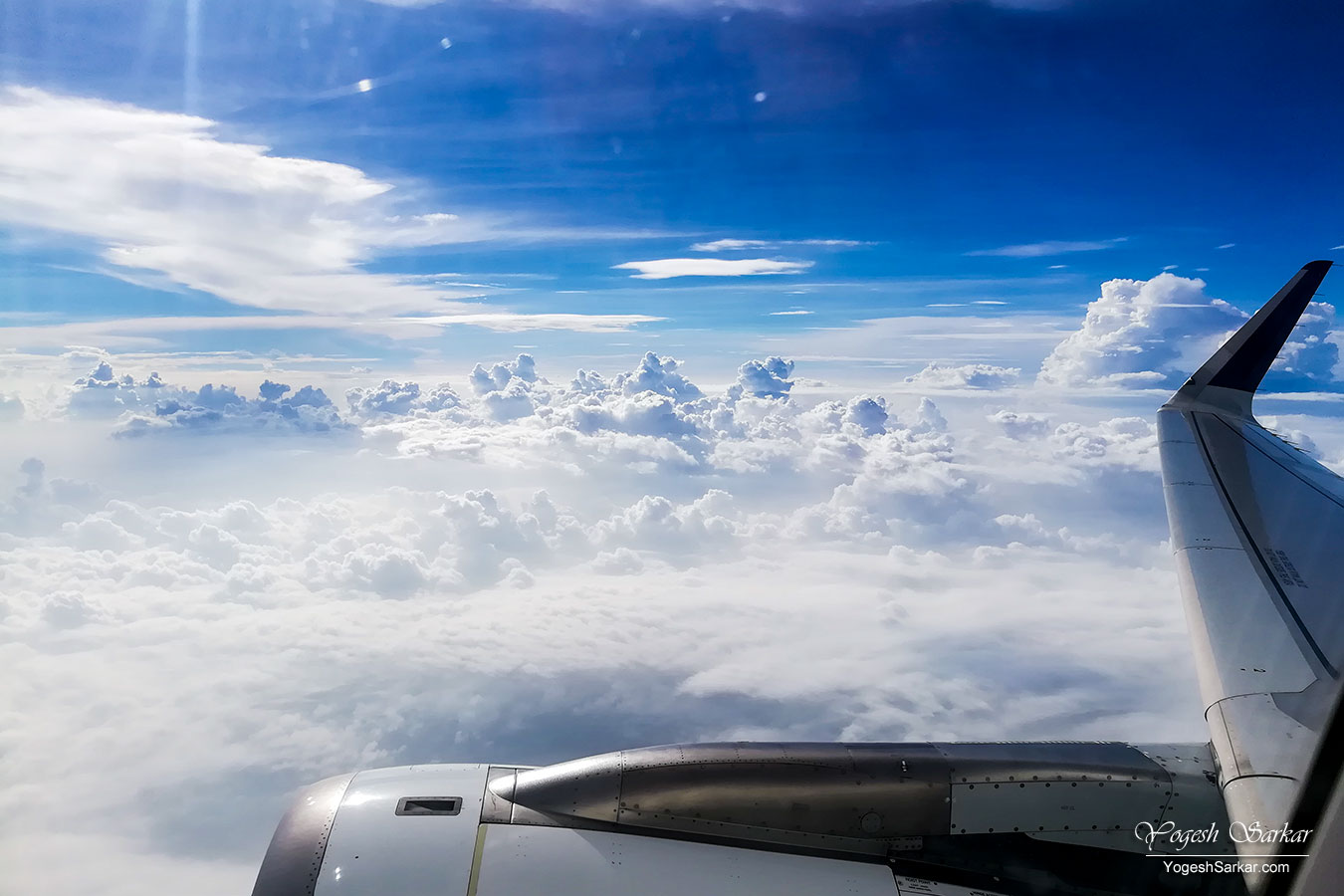 Our in-flight meal was served a little after the flight, consisting of coffee, a puff, and brownie. 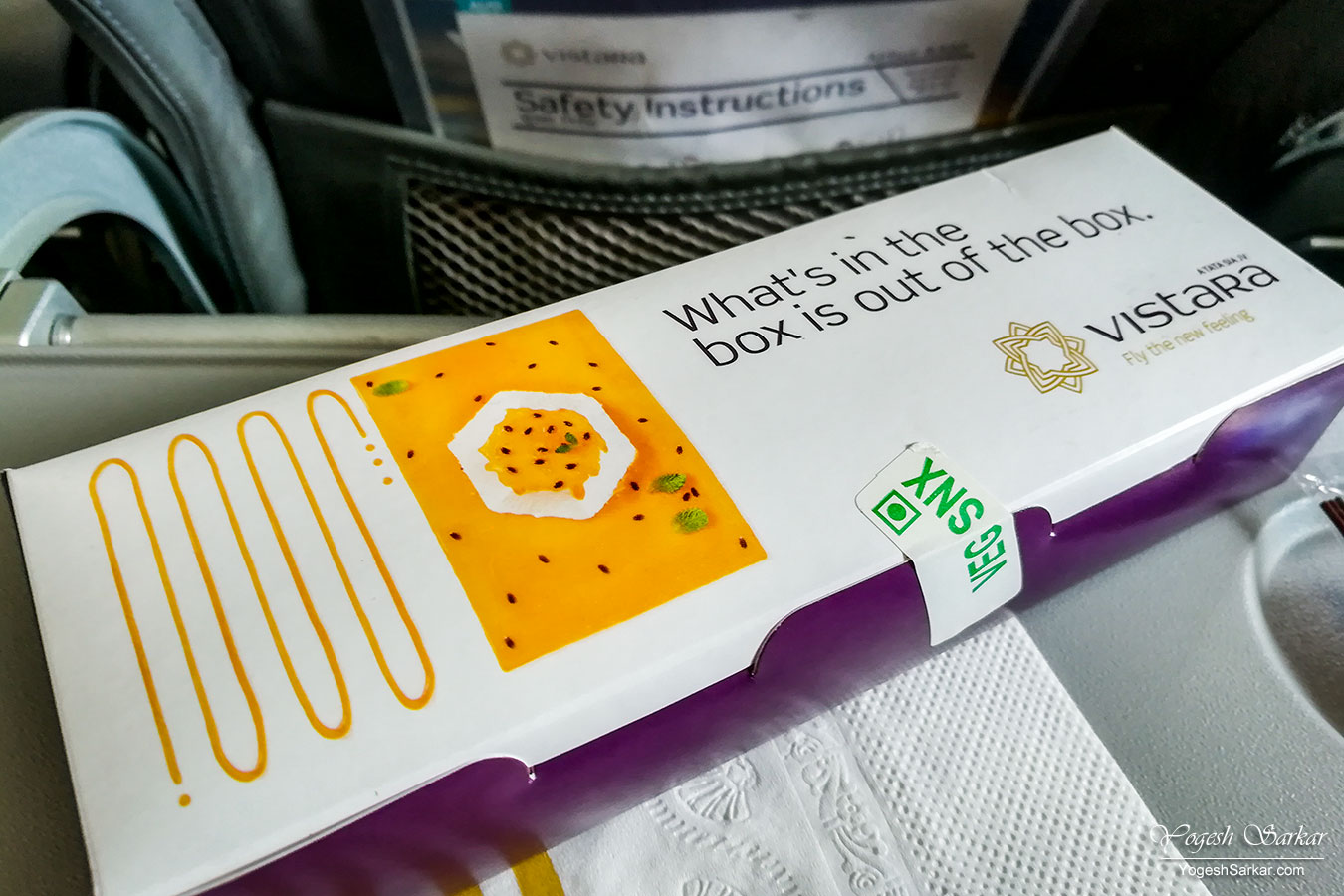 Even though it wasn’t that great, it was still better than what Air India and Jet Airways normally serve.

The pilot kept his promise and managed to reduce the 30 minute to delay to mere 10 minutes, as we hovered over Ladakh. 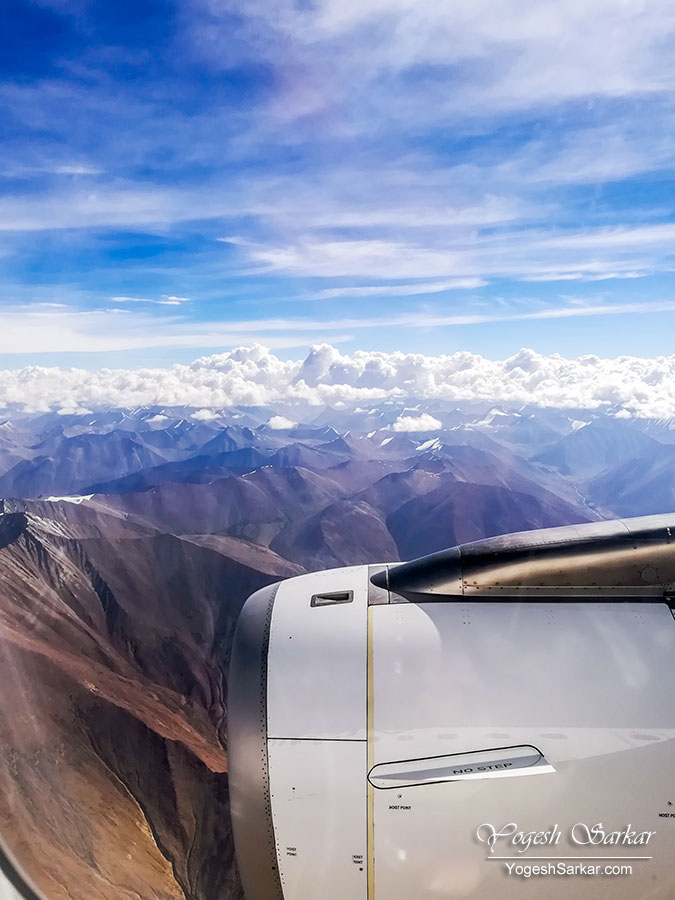 Around 8:55 am, we touched down at the Kushok Bakula Rimpochee Airport in Leh. Greeted by the now oh so familiar Himalayan Ranges, cold winds and the smell of kerosene in the air.

I had warned Mansi numerous times about the high altitude since this was her first visit to Ladakh. However, it was only after she stepped out of the bus and walked to the conveyor belt to collect the luggage, that the lack of oxygen in the air became truly apparent to her.

Stepping out of the airport, I couldn’t spot Sonam. I tried to call him, but couldn’t get through. Eventually, I hired a taxi for Rs. 300 to take us to Otsal’s Guest House at Changspa Road.

At the guest house, we were greeted by Otsal and his father, Sonam Uncle (not to be confused with Sonam the driver.)

We chatted for a while, before retiring to our rooms, with me getting my same ole room back on the first floor and Mansi in another room with not as great a view, as I had in mine.

We had planned to rest the entire day, to catch up on some sleep, before going out for food.

While I tried to catch up on sleep, Sonam showed up to my room and told me, he had been kept on duty by some army officer and thus he would have to depute his brother (he owned an Innova) to me. He offered me 15% discount instead of the 24% he had offered me the last time. Although I felt a little cheated, to be told of this at the last moment, I had little choice but to accept it.

Late in the afternoon, Mansi and I came out of our room and went outside, for food. We met Otsal near the Yama Café and sat down to have a chat over tea and cakes.

During the course of the chat, we decided to meet at the guest house after dinner and head to Spituk Monastery for night photography.

After settling our bill at Yama Café, which came out to be Rs. 380 for a piece of lemon cake, chocolate brownie, 2 ginger lemon honey teas and a black tea, we walked down to the Wonderland Café for dinner.

Once there, we ordered Cheese n Tomato Spaghetti Pasta, which was delicious. 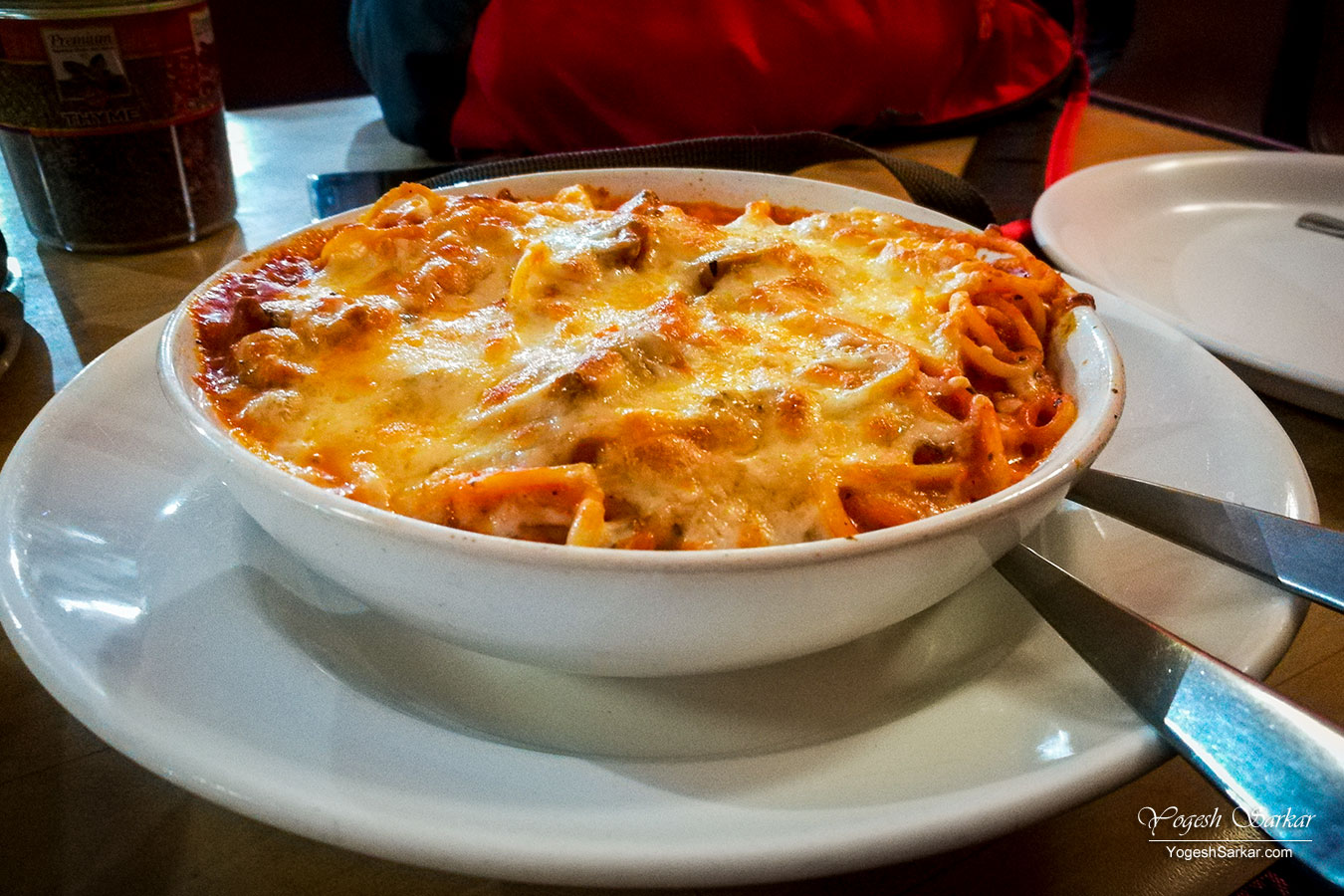 After settling our bill of Rs. 230 for the pasta, we slowly walked back to the guest house. Around 9:30 pm, we went with Otsal to Spituk Gompa in his Santro.

The full moon was already out in full force, something I hadn’t expected. The fact that partial lunar eclipse wasn’t visible made the moon all the more bright. Bathing the Spituk Village farms in its calming light. 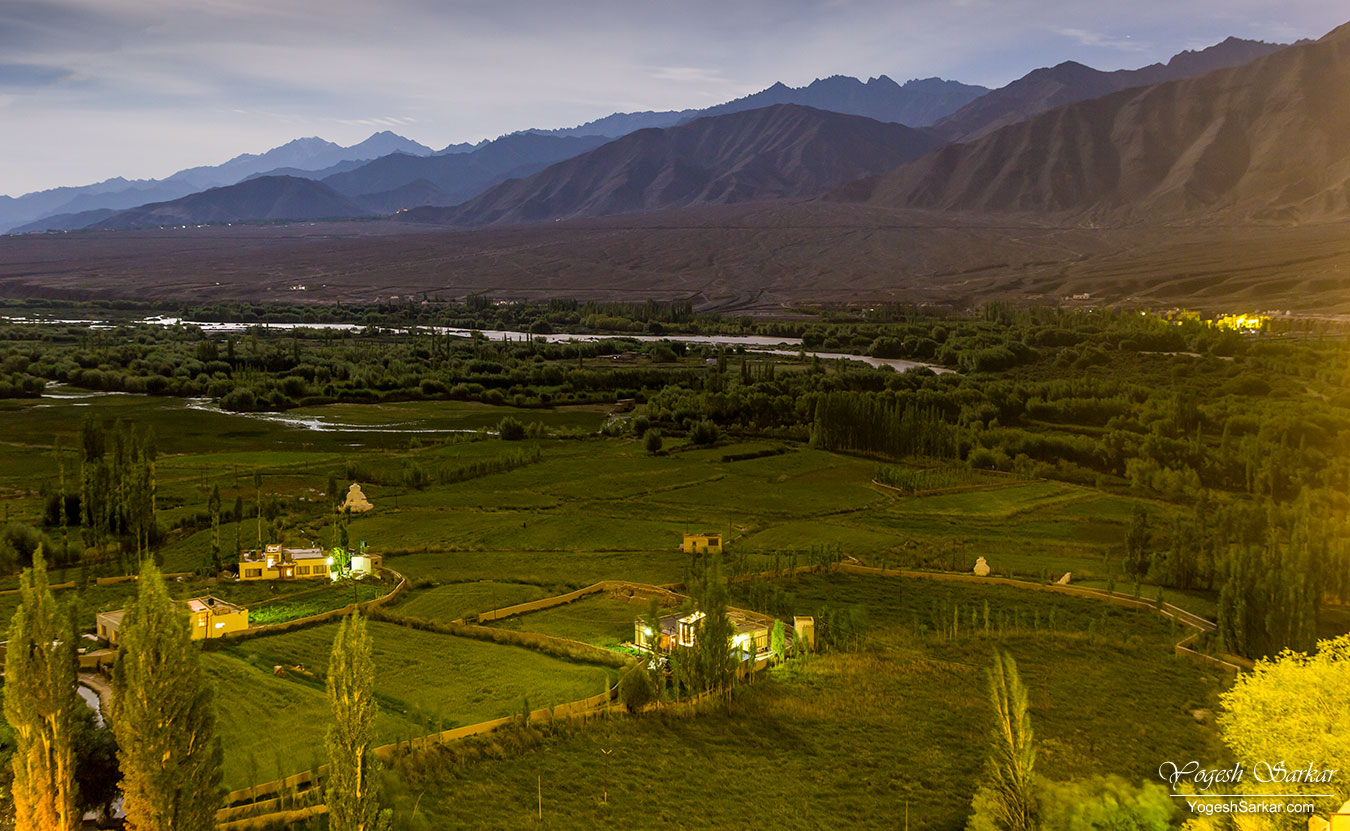 While I tried to photograph the Spituk Village and Leh City, Mansi and Otsal were busy talking about Ladakh and life. Leaving me to wander around, trying to photograph what the eyes could barely see, yet, the heart saw in entirety. 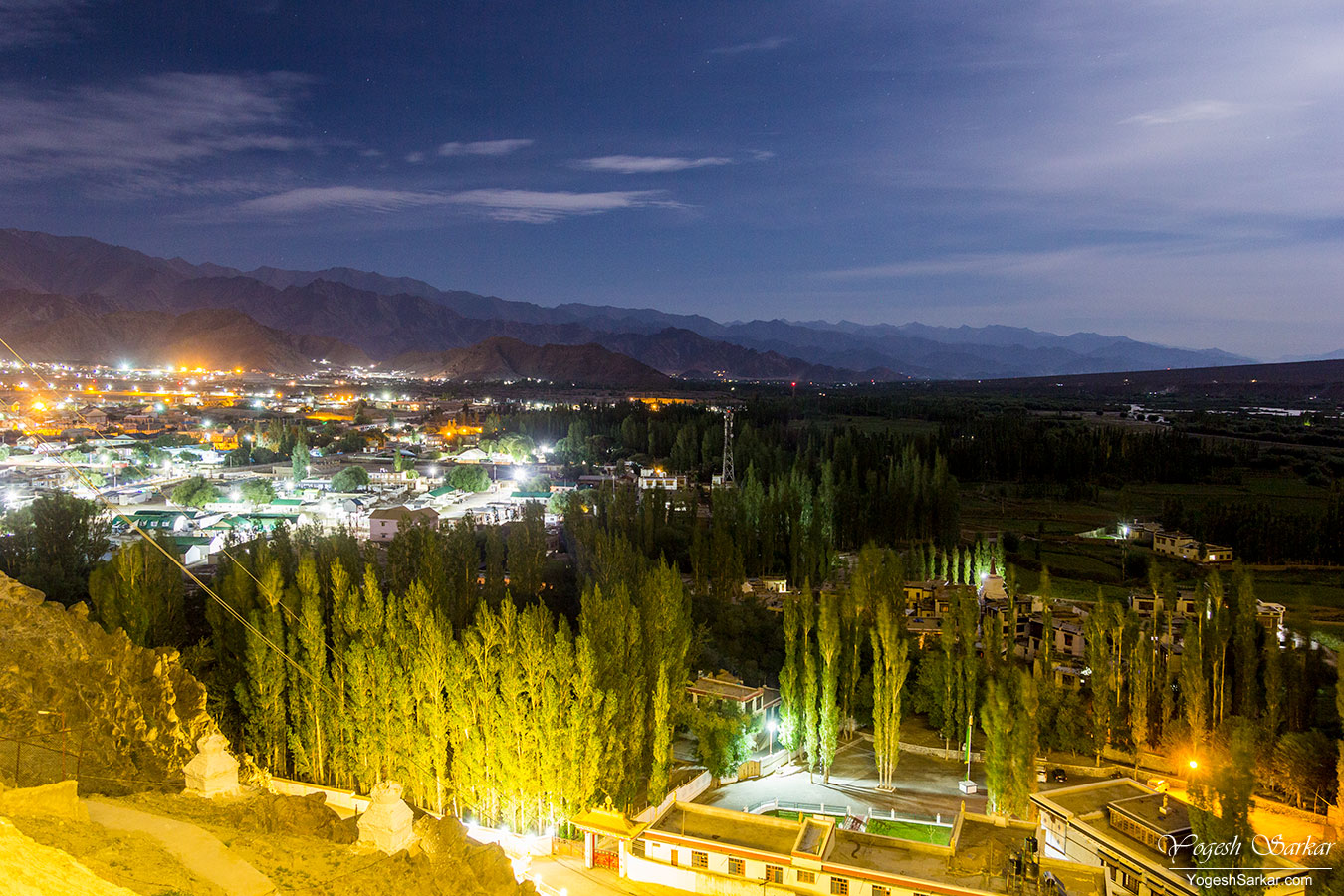 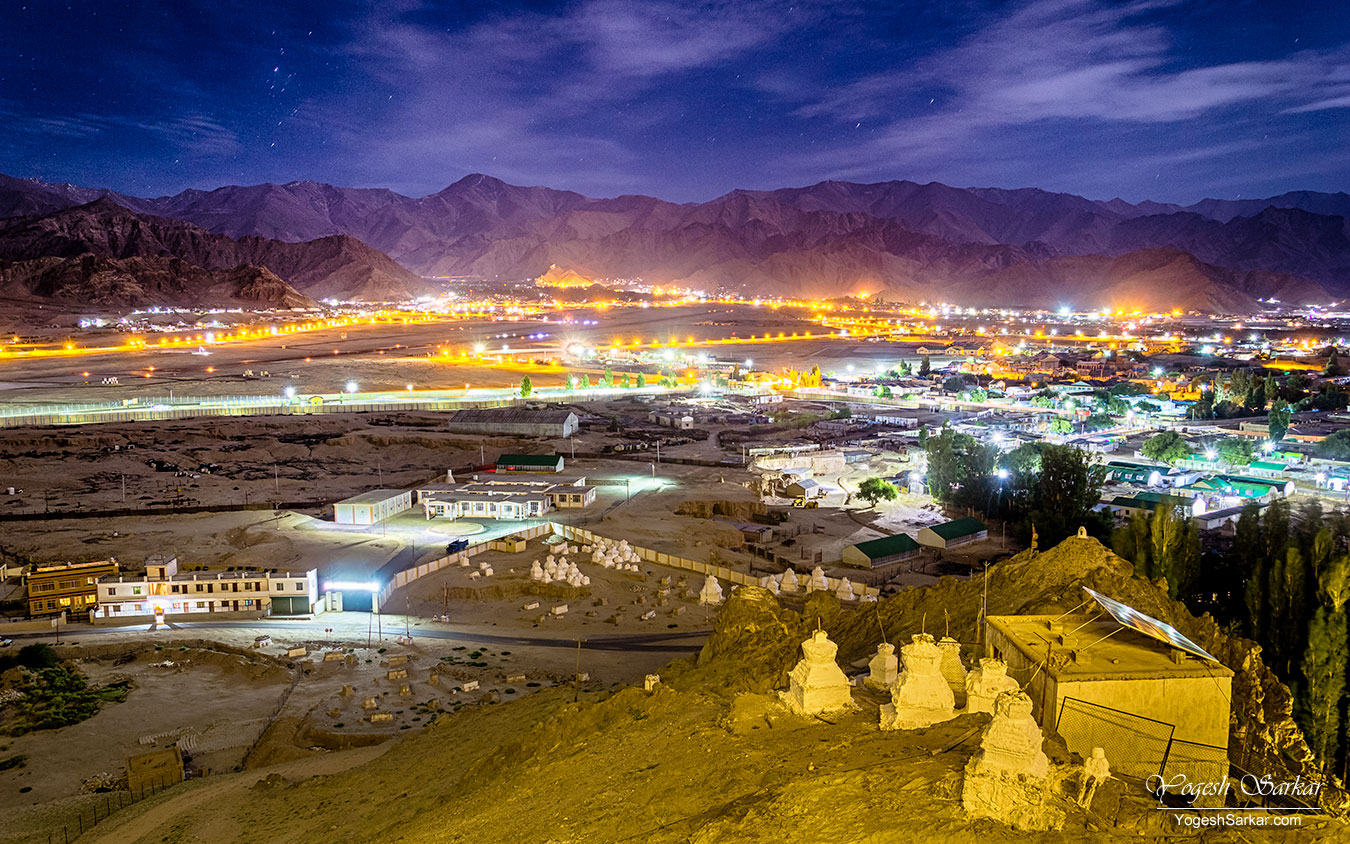 However, the real beauty of the night, waited for us, almost hidden, until we turned around and started walking back towards the car.

Part of Spituk Monastery was bathed in the light of the moon and of the lights adorning the main building of the monastery, while in the sky above; we could see the Ursa Major.

I knew this was the photograph, for which the God has brought me to Spituk Monastery. 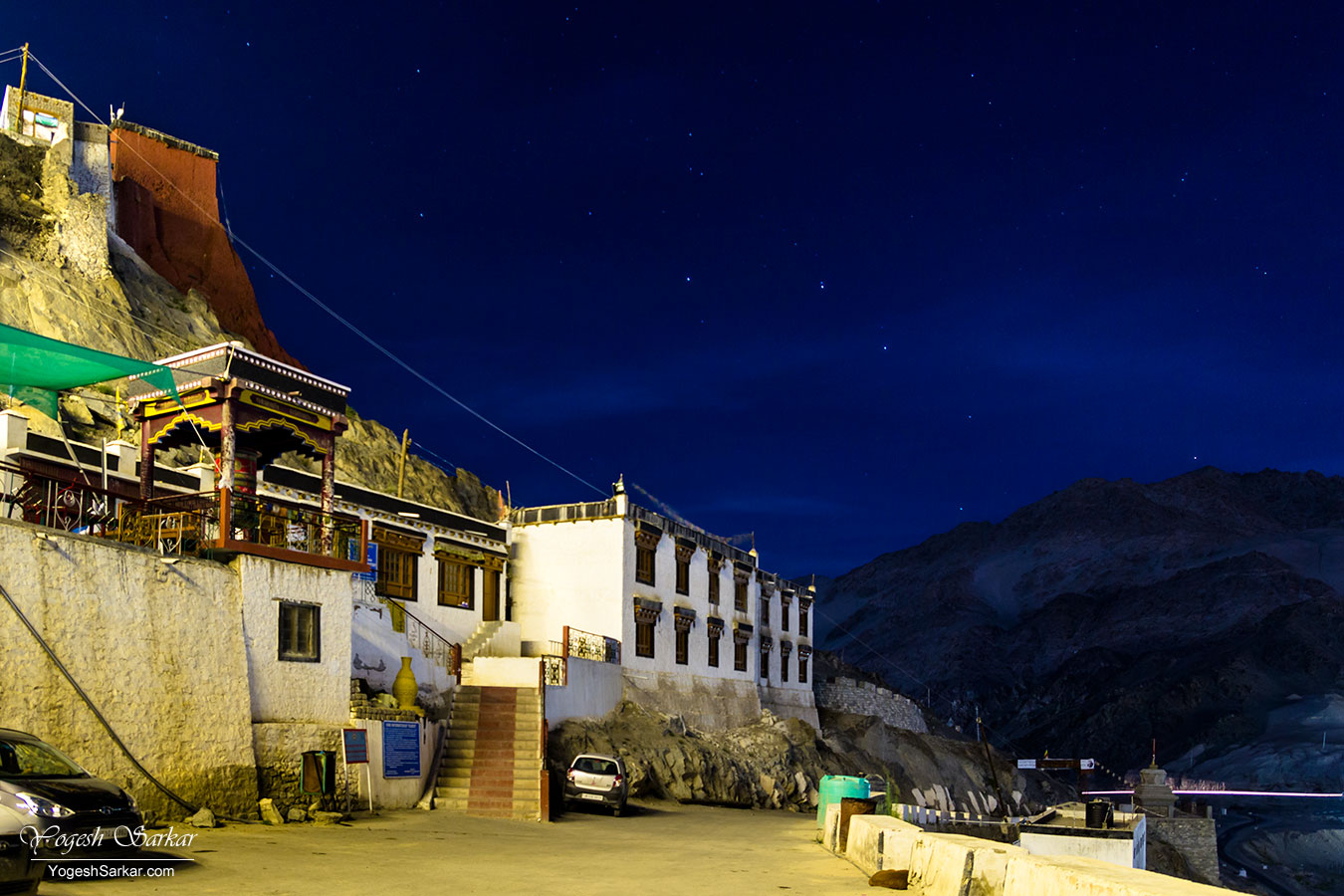 After this, we got inside Otsal’s car and drove back to the guest house. Once there, we thanked Otsal and retired to our rooms. Sleep was on our agenda, yet, I hardly knew, what the life had en stored for me.

Lovely pics! Waiting with bated breath ... what's to happen next?

Thanks Awara and Vikas.