WOW WOW AND WOW.
Exceptional is a small word
thoroughly enjoyed it.

Amazing pictures YS
sunset is my favorite one so far

Waiting for more YS. Could you help - did you by any chance notice what is the fuel (diesel) availability at Nubra and/or Tangtse?


teufel said:
Waiting for more YS. Could you help - did you by any chance notice what is the fuel (diesel) availability at Nubra and/or Tangtse?
Click to expand...

Petrol pump at Diskit has petrol and diesel, no fuel pump at Tangste, you will have to buy in black.

Yogesh Sarkar said:
Thanks everyone.


Petrol pump at Diskit has petrol and diesel, no fuel pump at Tangste, you will have to buy in black.
Click to expand...

Thanks. Diskit pump was closed too. So it's open again now, I understand.
P

Beautiful!!
By the way Yogeshji, it is possible to share contact phone number of Otsal Guest House at Leh.
We will be reaching Leh on 27th September.

prodhar said:
Beautiful!!
By the way Yogeshji, it is possible to share contact phone number of Otsal Guest House at Leh.
We will be reaching Leh on 27th September.
Click to expand...

Today was our last day in Leh and there wasn’t much sightseeing in store for today, apart from early in the morning. So both of us got ready early and after 5 am, Sonam arrived with another driver, who was going to drive us around in the morning.

We got into the Maruti Omni and headed for the Tsemo Gompa.

In Leh, the sun rises from behind the Tsemo Gompa and thus I had always done sunrise photography from Shanti Stupa and Spituk Monastery and usually photographed Tsemo Gompa with the sun directly behind it. Here is an example of it from my 2014 trip to Ladakh. Even before this trip, I had planned to shoot sunrise at Leh from Tsemo Gompa. Planning to shoot a time-lapse from there, which I hoped, would come out beautifully.

So once we reached Tsemo Gompa, I set up my tripod and camera for the time-lapse and let it work its magic.

In the meanwhile, the landscape was transforming in front of us, with light as well as hues painting a different story every few seconds. Even though Mansi wasn’t feeling well, she shot some fantastic photographs with my Canon 1000D. The Omni which had brought us here, was standing peacefully in the parking lot of Tsemo Gompa, looking like an integral part of the painting God was creating in front of our eyes. Today it wasn’t all really cold, just as well, because we had to spend a lot of time here, waiting for the time-lapse to finish. Though with the sun getting higher in the sky, temperature started getting hotter. While we stuck to our place, a couple of travelers came and went. One stuck around though for a while. However, before the time-lapse could finish, he vanished as well. I guess photography keeps people glued to a place for a longer duration than books .

Hard work err… standing around had paid off, and I had enough photographs to make this beautiful time-lapse when I came back from the trip.


Now the sun was out in force, yet, Leh looked beautiful as ever. During the course of the time-lapse, couple of flights had already landed at the airport. So it was time to head to the second destination for plane spotting and before that, it was time to change lenses.

This was the first time I was taking out my Canon 55-250 IS on this trip. And Mansi was excited to see what it could do here. So went about taking a few photographs with it and shot this beautiful photograph of Shanti Stupa. As we were packing up, a Jet Airways flight was getting ready to land at the Leh Airport. As it approached the runway, I got an interesting photograph of it, seemingly appearing minuscule in the midst of the mountains. We hopped into the Omni and drove to parking lot of Spituk Gompa. And thus begun our wait for the planes to arrive and eventually they did. Best thing was, this time I not only got their photographs while landing, but also while taking off! Leh Palace, Tsemo Gompa and the Go Air flight from Leh to Delhi. After having our fill and getting burnt by the harsh sun, we decided to skip Shanti Stupa and instead headed back.

Before the guest house, we got off near Café Jeevan and decided to have our breakfast there. I decided to order the American Breakfast, while Mansi first ordered Pan Cake and then Grilled Cheese Sandwich. With 3 egg omelet, a couple of bread pieces, fresh fruits, hash brown potatoes (or mushrooms) along with a small glass of apple juice and coffee (or tea if you prefer that), the American breakfast not only sounded heavy, it was really fulfilling.

Taste wise too, it was good. Though I guess the bread could have been a little more cooked and the plain omelet could have used a little bit more salt and pepper. However, apart from that, it was fine and the hash browns in particular, were really good.

Mansi’s pancake, on the other hand, was a little too sweet and to be honest, it looked more like a dosa than a pancake! Even though there was supposed to cream in it, it wasn’t really visible and jam’s taste was a little overpowering.

Even though Grilled Cheese Sandwich looked really appetizing, in reality, it was just bread with a thick slice of cheese inside. No flavors apart from that of bread and cheese and nothing else. Worst still, the cheese wasn’t melted or warm enough to appeal to our Indian taste buds.

After this, we came back to the guest house and chatted with Otsal for an hour or so, before retiring to our rooms and sleeping through most of the day, only waking up later in the afternoon.

After freshening up, we decided to leave the cameras behind and head to the market.

Before we could make it there, we stopped to look at Pashmina stoles at a shop. Even though they were pretty good, they were quite expensive.

So we decided to keep walking until we reached G-Kitchen and decided to have our lunch there.

I ordered a veg biryani and Mansi ordered dry Manchurian. While we were waiting for our food to arrive, we heard a procession passing below and got up to view it.


After watching the procession, it was time to have our lunch. And the food was quite good, even though service was a little bad. 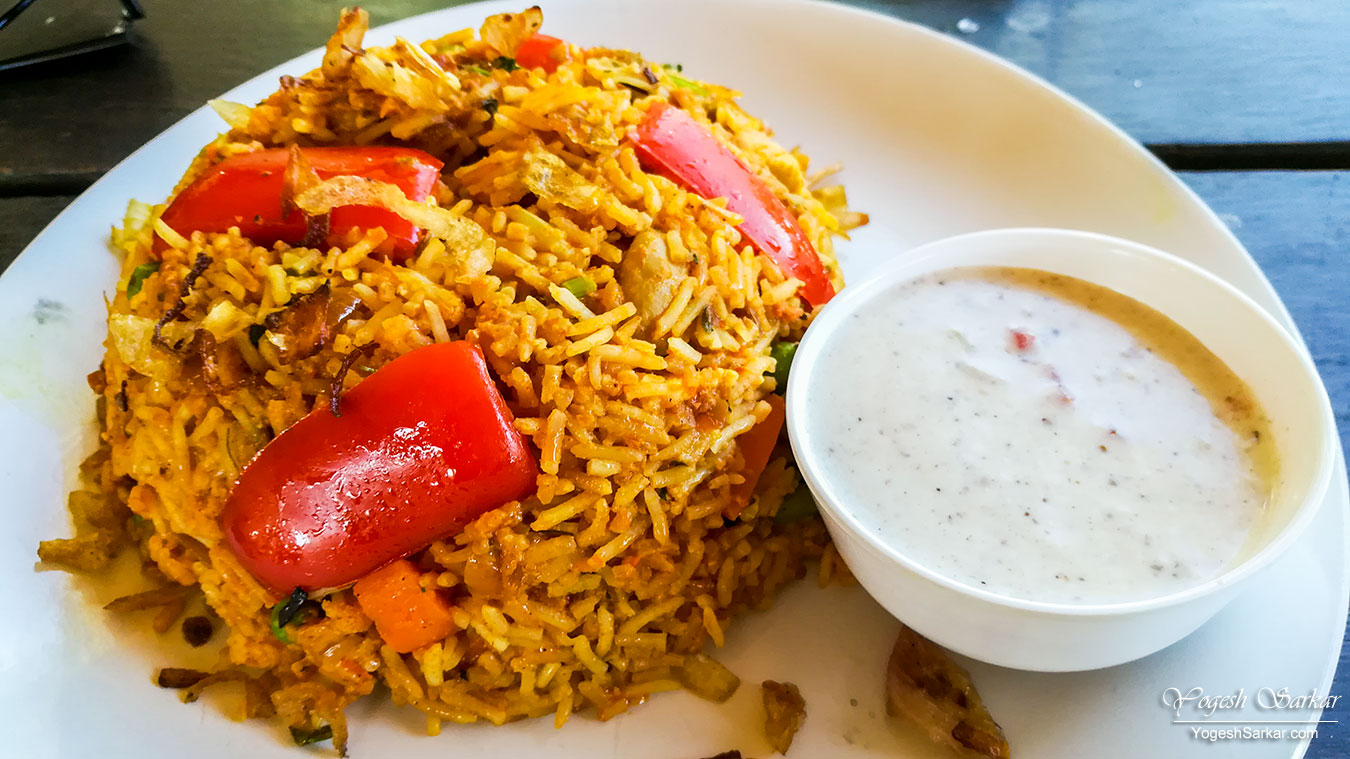 After having our fill we walked towards the market and instead of going into the main market, we kept walking towards the post office, since before that on the right-hand side there is a cooperative shop. This is the place where I had bought Pashmina Shawl from during my winter trip to Ladakh.

It was great to see the same uncle at the shop and after spending a while looking at various things on offer and general chatting, we bought a Pashmina Stole for Rs. 1800 and simple paintings for Rs. 200 each.

We spent rest of the evening exploring various shops and markets and bought a few more souvenirs for family and friends. Then we took a cab back to Otsal’s guest house around 10 pm. Even though he wanted Rs. 300, we managed to bargain it down to Rs. 100.

When we reached the guest house, it seemed Otsal had been looking for me for past couple of hours. He had tried to call me multiple times, however, my phone was unreachable.

He wouldn’t say, why he was looking for me. He just requested me to accompany him and for Mansi to head to the room. Since we were still full from the lunch, we decided to do what Otsal was saying and I hopped into his Santro and he drove me towards Shanti Stupa.

Then he stopped and turned into the parking lot of The Leh Chen. I had stayed here during my June 2015 trip to Ladakh. And I still had no clue, why Otsal had brought me here.

However, soon the surprise was revealed. Turns out, Gaurav Jani was in town with his motorcycle tour. He is a good friend of Otsal and he had asked to see me when I was in Pangong.

Gaurav and I had only met once, during the screening of his documentaries, Riding Solo to the Top of the World and One Crazy Ride in Delhi. However, he is no stranger to me or any motorcycle tourer in India. Be it for his documentaries or 60kph.

So the three of us sat in the lawns of The Leh Chen and talked for a while over drinks, before bidding adieu and Otsal and me heading back to the guest house.

I came back well past midnight and by the time I was done with packing, it was almost 1 am.

It was time to get some sleep, before the early morning flight to Delhi.

The trip was coming to an end and meeting Gaurav in Leh, was like icing on the cake.

Reading a travelogue after years now , impressive as ever and photos are superb.

Your travelogue also reminds us the fact that you can visit Ladhak more than 5 times and still there are places left to see.