Guwahati: The best of experts in wildlife research came together after three years to conduct the one-horned rhino census in Kaziranga National Park.

The two-day exercise started on Monday with park authorities using more than 40 elephants and 17 SUVs to work out the total number of rhinos in the park.


A total area of 882 sqkm including the Brahmaputra river area which makes for the 6th Addition to Kaziranga was divided into 74 compartments for the census count. A total of 36 blocks was covered on the first day while another 38 was covered on Tuesday.

“We covered 38 blocks today, and now the compilation remains to be done. After the sample count, results would be out in one or two days,” said Park Director, Akash Deep Baruah.

Census count is an elaborate process that involves enumerators, observers, forest officials, NGO activists, guides and mahouts. The jeep safari association and the district administration also play an important role. Enumerators are responsible for locating rhinos and doing the actual physical counting. Not all compartments are covered on elephant backs. The results are then fed to the technical committee constituted under the Principal Chief Conservator of Forests (PCCF). The role of guides is restricted to area identification and providing security to the team.

“We could count 100% of Kaziranga in the two-day exercise. The method of counting requires good conditions and all these factors would be examined once the compilation is over and feedback is collected from the enumerators,” said NK Vasu, the state principal chief conservator of forests (wildlife).

Sources told News18 that grasslands burning this season has not been to the desired level due to weather conditions which affected visibility during the count.

According to the last survey in 2015, the rhino population in Kaziranga National Park is 2,401 that includes a viable breeding herd of 802 females.

All India Bandh today.
Beware some incidents of road block.

New Delhi: Curfew was imposed in parts of Gwalior and Section 144 (prohibits assembly of more than 4 people in the area) imposed in Sagar in Madhya Pradesh after one person was killed in Morena. There have also been sporadic incidences of violence in Meerut, Agra, Patna, Rohtak, Delhi and Bagpat during the Bharat Bandh called by Dalit organisations and parties today to protest the amended SC/ST Prevention of Atrocities Act. In Meerut, protesters torched Shobhapur police post and vandalised a car and motorcycle. Protests turn violent in Barmer, cars and property damaged, reports news agency ANI. In Kapurthala’s Subhanpur, protesters blocked the Jalandhar-Amritsar National Highway. Protestors also blocked panda bypass in Hoshiarpur. At some places in Bihar, the protesters have also blocked national and state highways. Protests are being staged in Agra and Bharatpur too. Protesters also stopped a train in Patiala in Punjab, reports news agency ANI. The government is expected to file a petition seeking a review of the Supreme Court order diluting the provisions of Act. The Act protects SCs and STs against discrimination and atrocities. The Supreme Court amended the SC/ST Act on March 20. Visuals of #BharatBandh protest from Morena over the SC/ST Protection Act: Protesters block a railway track. #MadhyaPradesh pic.twitter.com/8DAKAHWPSb — ANI (@ani) April 2, 2018 In the review petition drafted by the Ministry of Social Justice and Empowerment, the Centre says the the order will weaken the provisions of the Act. The SC said that under the amended Act, public servants can't be prosecuted without the approval of the appointing authority, and private citizens can only be arrested after an inquiry. The court also said that preliminary inquiry in a case under the Act would be conducted by the Deputy Superintendent of Police to ensure the allegations are not frivolous. The amendment in the law was a bid to protect honest public servants discharging bona fide duties from being blackmailed with false cases under the Act. However, dalit organisations and some political parties fear the dilution of the provisions of the Act might lead to increase in violence against Dalits. Several dalit outfits have called for a Bharat Bandh today. There have been sporadic incidences of violence in Meerut, Agra, Patna, Ranchi, Rohtak, Delhi, Bagpat and in Odisha. A delegation of dalit MPs is scheduled to meet Prime Minister Narendra Modi today.

ONB Laser at a very lucrative price via the most reputed seller on Amazon India.

During the yatra govt provide water/Health emergency /police security on the way for any casulity.

Before or after these days Himachal govt.will not provide any facility and security.

Police has been doing the same for quite some time here in Tricity on the directions of Hon'ble Punjab & Haryana High Court, Chandigarh

I remember rolling Yezdi / Jawa Bike away from home before kick starting it to keep whole locality from knowing that I am on the move.

This is a great news

My travelogue of Daran Pass and Sarahan got published in the recent issue of The Traveller Trails travel magazine. Subscription to the print magazine as well this article of mine along with other travel stories and articles can be found on their website at Front page 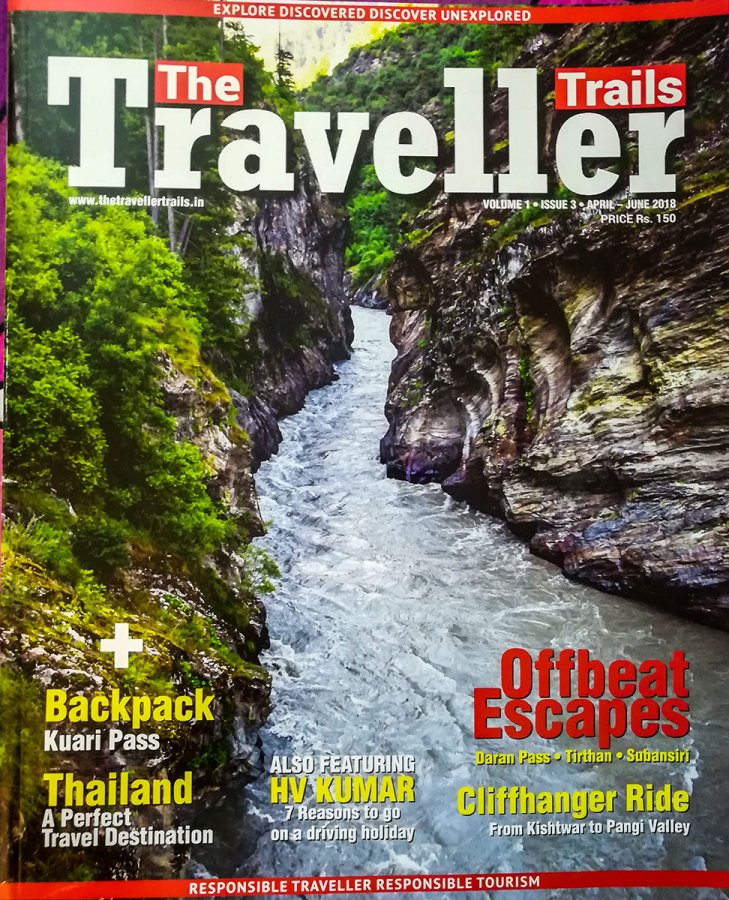 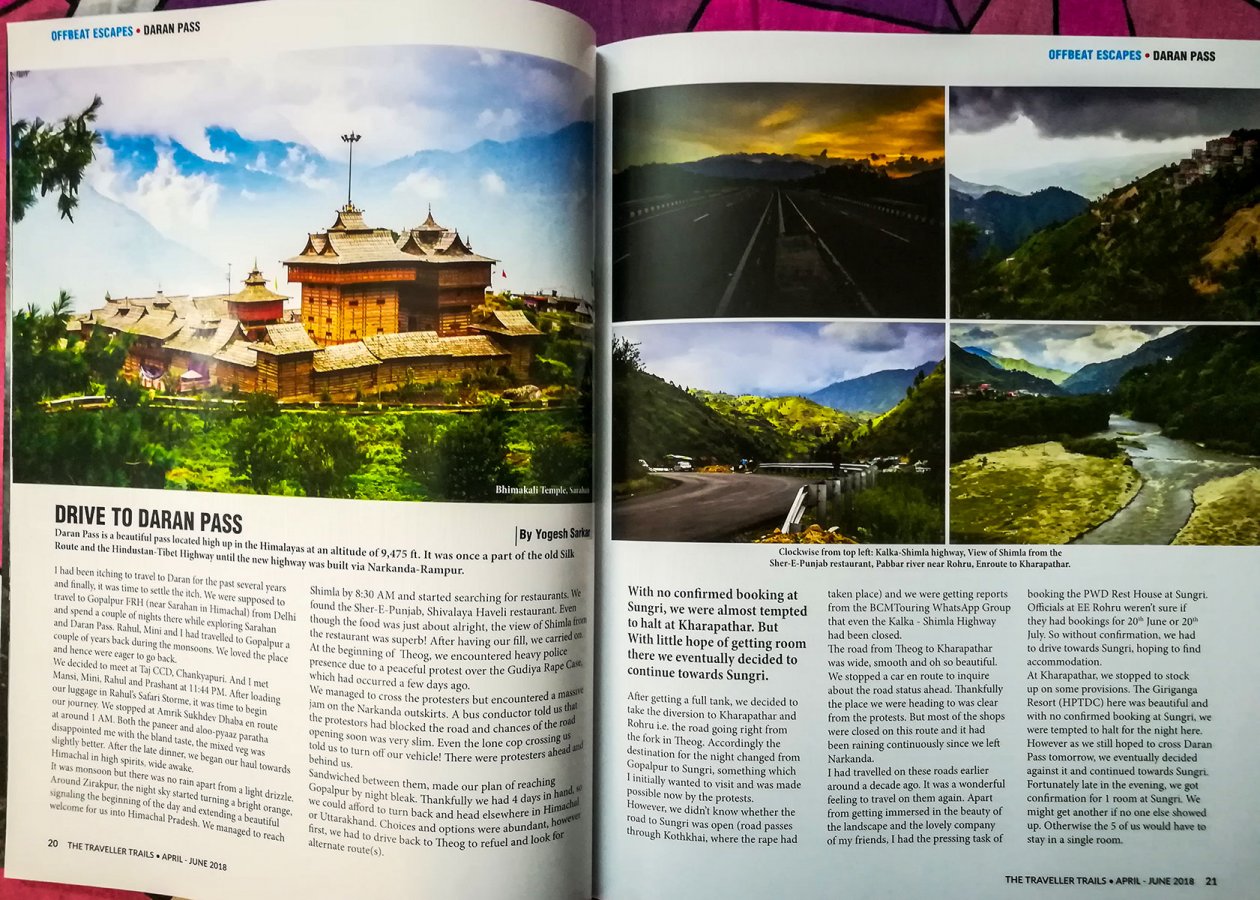