Following airports have been closed for civilian air traffic for 3 months or until the situation improves:

Jammu-Pathankot Highway has been closed by the army for security reasons.

Some of the hotels in Kashmir are offering free stay to tourists, who are stuck in the valley due to flight cancellation.

Namgya Avalanche rescue: Army, ITBP and DRDO personnel along with locals continue search for the 5 Army personnel who have been trapped in an avalanche since the last 9 days at Namgya, Kinnaur. A mobile phone was found yesterday. #HimachalPradesh 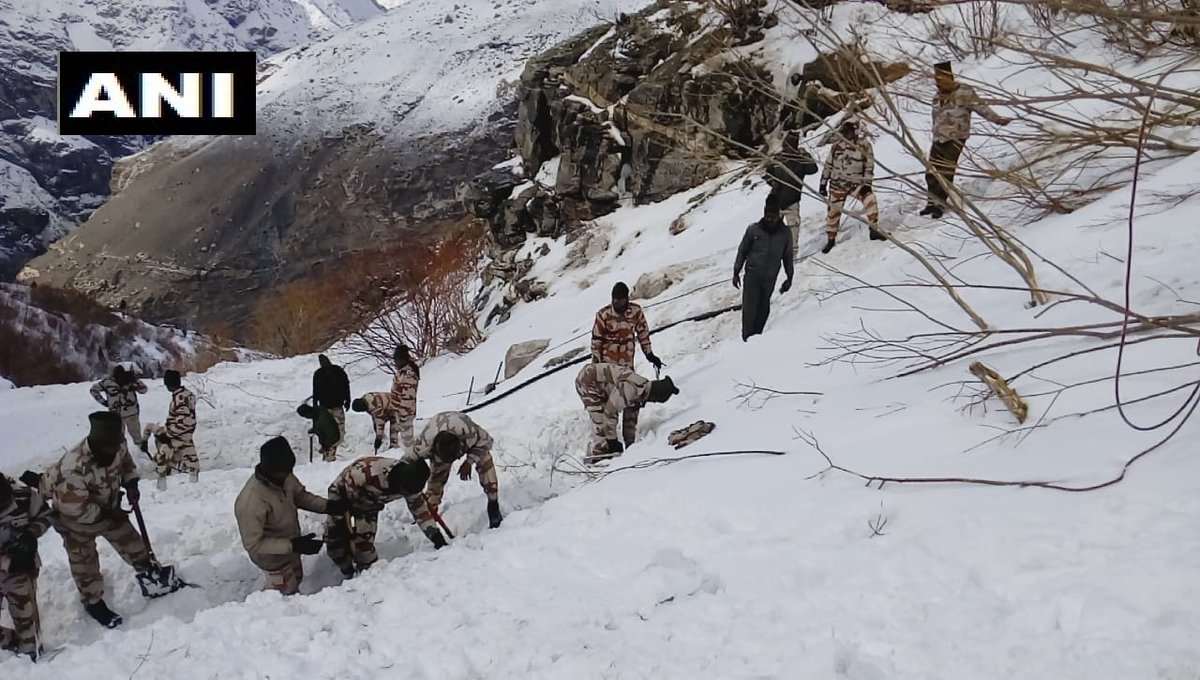 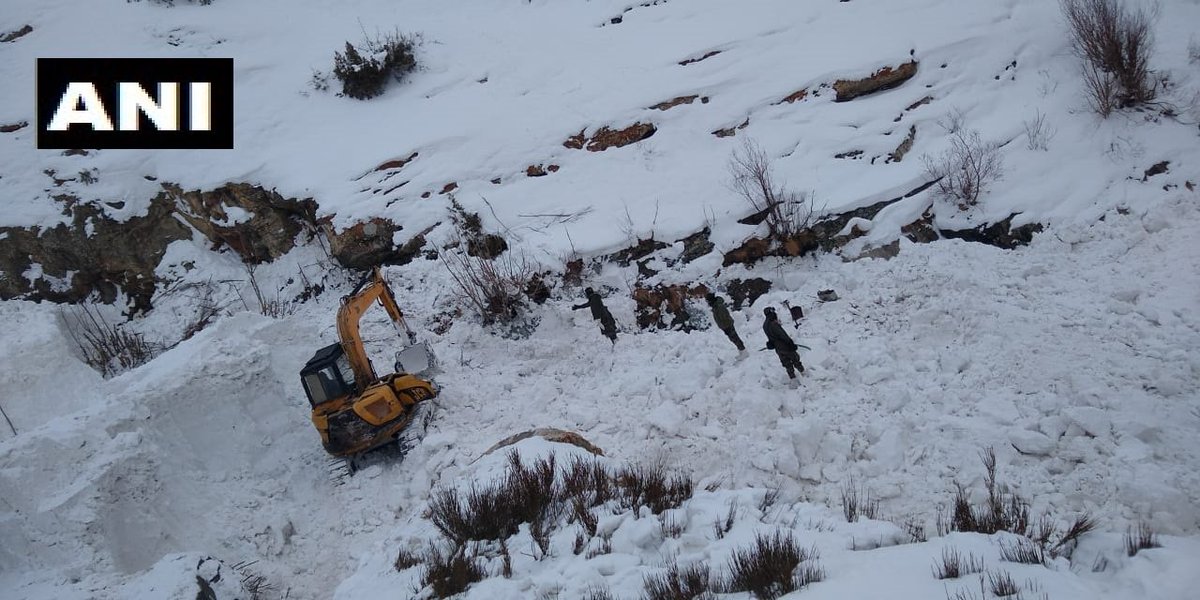 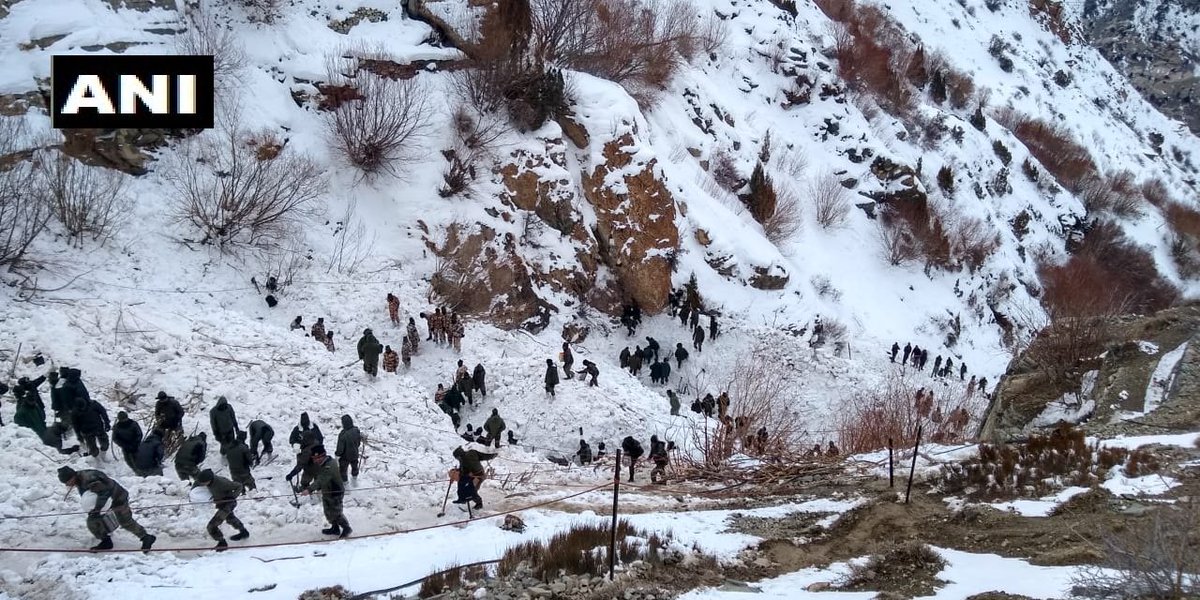 Make your Travel plans according to the Election Dates as some areas may be closed on particular dates at particular places.

All India | Reported by A Vaidyanathan, Edited by Deepshikha Ghosh |

Election Dates 2019 Schedule: The term of the Lok Sabha ends on June 3.

NEW DELHI:
HIGHLIGHTS
The national election will be held in seven rounds from 11 April and the results will be announced on May 23, the Election Commission said on Sunday. Voting will be held across India on April 11, April 19, April 23, April 29, May 6, May 12 and May 19.
The announcement signals the start of a colossal voting exercise that will see Prime Minister Narendra Modi seeking another term in office and the opposition attempting to join forces to put up a strong fight.
Elections will also be held in four states -- Andhra Pradesh, Sikkim, Arunachal Pradesh and Odisha - along with the parliamentary polls.
"The festival of democracy, elections are here. I urge my fellow Indians to enrich the 2019 Lok Sabha elections with their active participation. I hope this election witnesses a historic turnout. I particularly call upon first time voters to vote in record numbers," PM Modi tweeted.

https://twitter.com/i/web/status/1104722029599580161
Best wishes to the Election Commission, all those officials and security personnel who will be on the field, across the length and breadth of India assuring smooth elections. India is very proud of the EC for assiduously organising elections for several years.
35.3K
6:03 PM - Mar 10, 2019
Twitter Ads info and privacy
Click to expand...

9,701 people are talking about this


The Model Code of Conduct spelling out dos and don'ts for elections is now in place, which means the government cannot announce any new schemes.
The opposition Congress had accused the Election Commission of delaying the dates to enable the government to rush through the launch of welfare schemes and projects; no announcements can be made once the model code of conduct kicks in with the election dates. Commission sources have rubbished the claims. 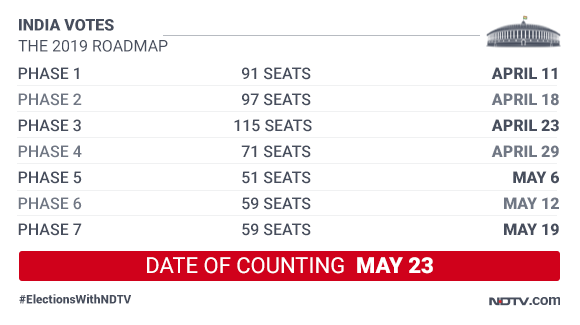 The term of the Lok Sabha ends on June 3.
"Examination schedules of all state boards and factors like festivals and harvest season were taken into consideration while fixing poll dates," said Chief Election Commissioner Sunil Arora, while announcing the poll dates.
About 900 million voters would be eligible for the polls, about 15 million between the ages of 18 and 19 years.

In 2014, PM Modi's BJP became the first party in three decades to win a majority on its own; it won 282 of the 543 seats in Lok Sabha, where the majority mark is 272. The BJP-led National Democratic Alliance (NDA) won 336 seats.
The Congress was voted out of power after two terms and was reduced to just 44 seats.
The election body said assembly elections will not be held in Jammu and Kashmir along with the Lok Sabha elections. The state has been under Governor's rule since the BJP ended the ruling alliance with Mehbooba Mufti's People's Democratic Party in June. 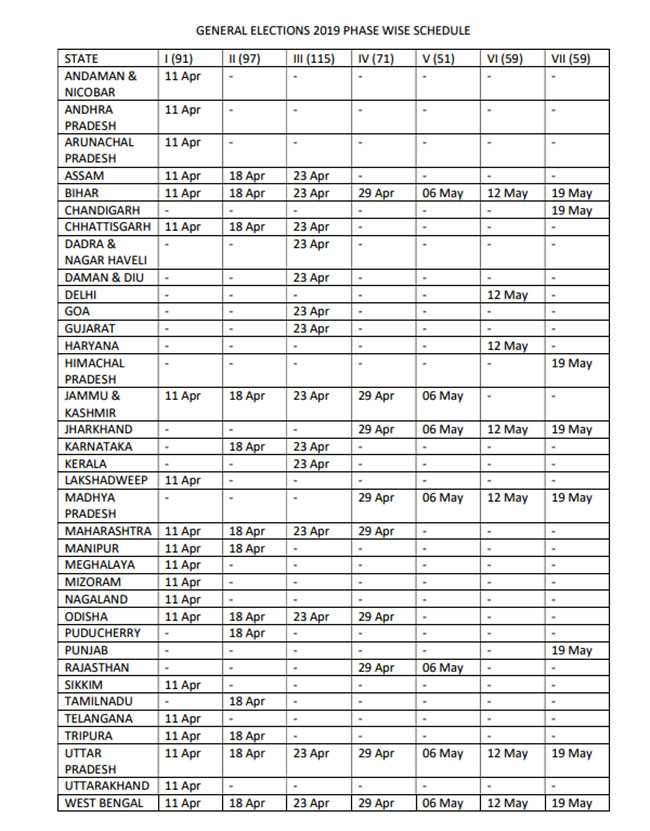 Some opinion polls have suggested ebbing support for the BJP since 2014. The party is said to be facing a particularly tough challenge after the Congress won three key state election victories in December, chipping into the BJP's core support base in the Hindi heartland home to nearly half a billion voters.

Until a few weeks ago, a shortage of jobs, farm distress and were seen as denting the ruling party's popularity. But after India's air strikes in Pakistan following the Pulwama terror attack, reflecting a strong response to terror from Pakistan-based groups, several BJP leaders have spoken about a wave in the party's support. The congress and other opposition parties have hit out at the BJP, accusing it of exploiting the armed forces for votes.

IndiGo, Jet Airways airfares surge as 200 flights cancelled; Rs 20,000 for Delhi-Mumbai ticket
By: Arun Nayal | Published: March 11, 2019 5:04 AM
On key metro routes like the Delhi-Mumbai, spot fares have risen by up to 20% since January this year.

With two major carriers — IndiGo and Jet Airways — cancelling around 200 flights daily, spot fares (those booked 7-15 days before the date of travel) are increasing compared with the prices in January when the flight schedules were more or less normal. On key metro routes like the Delhi-Mumbai, spot fares have risen by up to 20% since January this year.
Fliers booking tickets within seven days of travel have to shell out over Rs 20,000 for a to-and-fro journey between Delhi and Mumbai, which is higher by around 20% compared with spot fares in January, according to data provided by Yatra.com.
Similarly, a Delhi-Bengaluru ticket will costRs 18,430 for travelling after seven days from the booking date — around 21% compared with January.
Analysts said spot fares have risen as IndiGo started cancelling around 30 flights daily since February due to shortage of pilots, which will carry on this month and the Jet fleet got depleted with several groundings due to non-payment to lessors.
According to government sources, around 200 daily flights are being cancelled by Jet. Directorate General of Civil Aviation (DGCA) said last week that Jet is flying with just 70 planes out of its 123 aircraft fleet size due to non-payment of dues by the airline to its lessors and lack of spares.

The two airlines normally operate a total of 1,700-2,000 flights daily.
“The repair work at the Mumbai airport has amplified the problems. There been a significant increase in spot fares on main routes. It is in the range of 15-18% month-on-month. Typically, a Delhi-Mumbai return ticket costs around Rs 15,000 per passenger if booked 3-4 days in advance,” Anand Menon, brand leader, leisure travel brand of FCM Travel Solutions said.
Ticket prices for journey 15 days later are also heading north. A return ticket between Mumbai and Bengaluru is priced at Rs 9,426, up from Rs 7,961 in January and Rs 8,234 during February. Similarly, a two-way journey between Delhi and Hyderabad could cost Rs 8,674 during March if the booking is made 15 days in advance. It cost Rs 8,343 for the same journey in January planned 15 days ahead.

Domestic air traffic growth fell to a 52-month low at 9.1% year-on-year during January mainly due to higher fares. Industry executives expect the growth moderation to continue due to airlines flying lesser capacities.
“Groundings by Jet is likely to keep the passenger traffic growth in the 10-12% range for next few months,” an executive at low-cost carrier said.
Menon of FCM Travel Solutions expects the spot fares to remain higher unless the Jet situation improves quickly.

Jet Airways has just 70 planes left in operations, so there will be a lot of cancellation and the airline will pull out of smaller and somewhat unprofitable routes. This will have cascading effect and ticket prices will go up, just as they did when Kingfisher went out of business.

If Indigo too is heaving serious difficulties, then only God can help domestic Indian flyer.

Awesome! More ads, this time on the idiot box, before you load the program, which shows you still more ads! Vizio wants to bring targeted ads to smart TVs

DGCA had on Monday ordered additional maintenance checks for the planes but fell short of ordering their grounding.

J aviation watchdog DGCA has decided to immediately ground the Boeing 737 MAX 8 aircraft, days after an Ethiopian Airline crash killed 157 people, including four Indians. The planes will stay grounded till appropriate modifications and safety measures are undertaken to ensure their safe operations, the Civil Aviation Ministry announced on Tuesday evening.

"As always, passenger safety remains our top priority. We continue to consult closely with regulators around the world, airlines, and aircraft manufacturers to ensure passenger safety," Civil Aviation Ministry said on Twitter.

New Delhi's decision comes after a number of countries grounded the new model of the US aircraft manufacturer's best-selling 737.

Among Indian carriers, SpiceJet has 13 jets of the model 8 variant in its 75-strong fleet while Jet Airways has five such aircraft.

Following the DGCA's decision, both the airlines have have suspended the operation of their 737 MAX 8 jets.

"Safety and security of our passengers, crew and operations are of utmost importance to us," SpiceJet said. The airline, earlier on Tuesday, had defended the jets and called them "highly sophisticated".

Many countries, including South Korea, Singapore and China have grounded the jets following the second fatal accident of the aircraft in just five months. In October, a Lion Air plane crashed into the sea off the Indonesian capital of Jakarta 13 minutes after take-off, killing all 189 onboard.

The Directorate General of Civil Aviation or DGCA had on Monday ordered additional maintenance checks for the planes but stopped short of ordering their grounding. It also directed Indian carriers to ensure that pilots have 1,000 hours and co-pilots 500 hours of flying experience on the 737 MAX 8.

SpiceJet said it had implemented the additional "precautionary measures" and was "actively engaged" with Boeing and the Indian Directorate General of Civil Aviation.

US regulators on Monday ordered Boeing to make urgent improvements to the best-selling jet involved in the fatal Ethiopia plane crash -- but ruled out grounding the fleet as investigators worked to piece together the aircraft's final moments while US carriers appear to maintain confidence in the manufacturer. 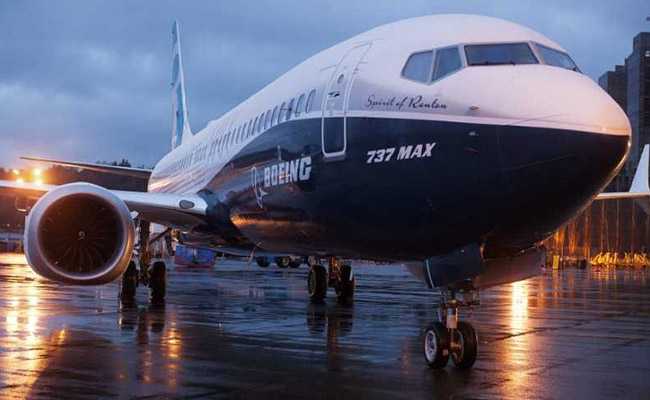 India's Aviation watchdog DGCA has taken the decision to ground the Boeing 737 MAX 8 aircraft days after the Ethiopian Airline crash that killed 157 people that included four Indians. India's decision comes after a number of countries grounded the new model of the US aircraft manufacturer's...