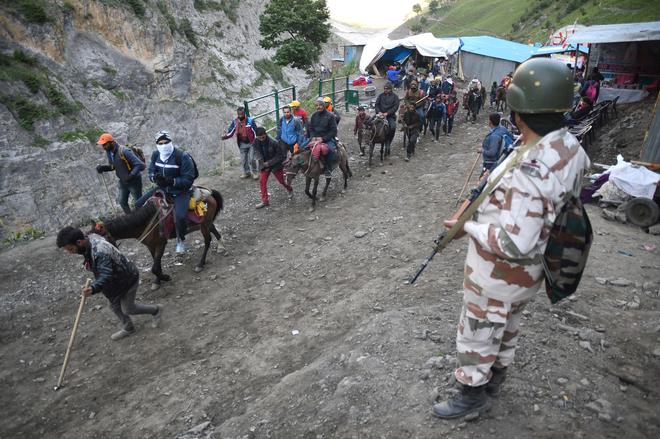 File photo of Hindu pilgrims crossing mountain trails during their religious journey to the Amarnath cave on the Baltal route, some 125 kilometers northeast of Srinagar | Photo Credit: Nissar Ahmad

The spokesperson said the track from Baltal and Pahalgam has become slippery due to recent heavy rainfall and the situation is likely to aggravate in the next couple of days.

The yatra was suspended on Wednesday as a precautionary measure to avoid any untoward incident, officials said.


Vadodara rains updates: Gujarat city flooded, trains cancelled, airport shut down
After heavy rain lashed Vadodara, the vehicles were seen driving through waterlogged roads, some trains have been cancelled and the airport has also been temporarily shut down.
ADVERTISEMENT 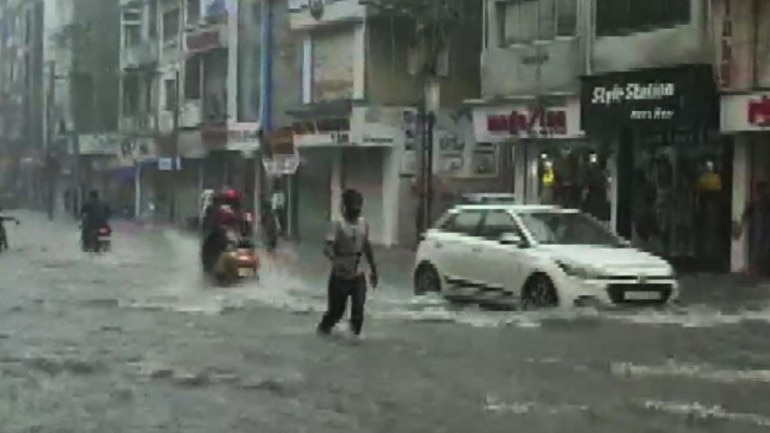 Gujarat: Water-logging in Vadodara due to heavy rainfall in city. 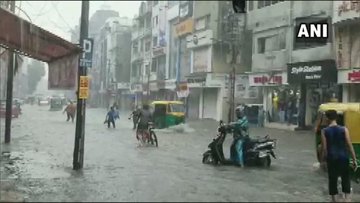 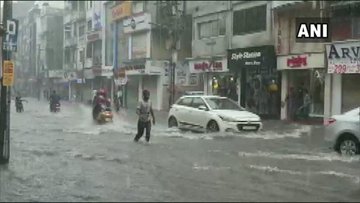 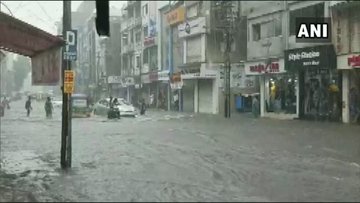 57 people are talking about this 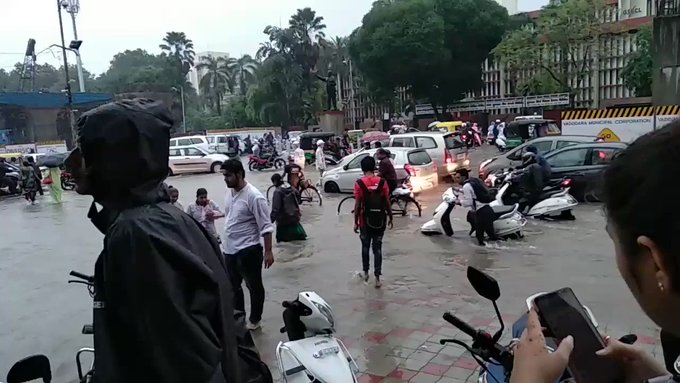 After the heavy rainfall hit Vadodara, it took only a couple of hours for commuters to find themselves stuck in traffic jams.

On July 30, parts of south Gujarat and Saurashtra received heavy rainfall. The India Meteorological Department (IMD) predicted "widespread" rainfall across the state till Saturday.
Teams of the National Disaster Response Force (NDRF) and the State Disaster Response Force (SDRF) were put on stand-by in various rainfall districts in north and south Gujarat and Saurashtra region to tackle any eventuality.
The India Meteorological Department forecasts widespread rainfall across Gujarat till Saturday, with "heavy to very heavy rainfall" in south and north Gujarat regions, especially in Valsad, Bharuch, Navsari, Tapi, Banaskantha and Patan districts.
(With inputs from ANI and PTI)

Soon after a joint press briefing by the army and police on intelligence inputs that there were attempts by Pakistan to disrupt/target the Amarnath Yatra, the Jammu and Kashmir government issued a security advisory in the interest of yatra pilgrims and tourists.
The government order advised tourists and the yatris to curtail their stay in the Kashmir Valley and take necessary measures to return as soon as possible.

Mumbai-Goa highway closed due to landslide near Mauje dhamandevi village.

Heavy rain is predicted for next 48 hours.

Mumbai/Goa [India], Aug 3 (ANI):
Mumbai-Goa national highway in Maharashtra was closed for traffic following a landslide caused by rainfall near Mauje Dhamandevi village in Raigarh.The landslide occurred in the wee hours of Saturday. The road-clearing operation is underway by the police and administration.Meanwhile, the Indian Meteorological Department predicted "heavy to very heavy" rainfall at few places for the next few days in Konkan and other parts of south
Maharashtra ."Strong winds with speed reaching 40-50 kmph gusting to 60 kmph likely to prevail along and off
Maharashtra coast during next three days and along south
Maharashtra -Goa coast during next four days," the IMD said.
"Rough to very rough sea conditions (wind speed reaching 40-50 kmph) are likely to prevail over the north Arabian sea, central and south-west Arabian Sea during next 5 days," it further added. (ANI) 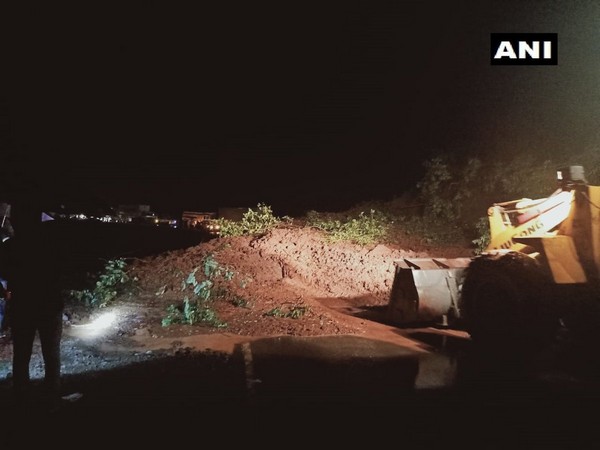 Gurgaon
Traffic Advisory : -
The Shankar Chowk underpass connecting Ambience Mall to Iffco Chowk has been closed due to road cave-in. Commuters coming from Ambience Mall and Nathupur are requested to take Cyber city road till Sikanderpur and then take MG road to reach Iffco chowk.
https://t.co/HnBReYNGLh


Traffic Advisory : - The Shankar Chowk underpass connecting Ambience Mall to Iffco Chowk has been closed due to road cave-in. Commuters coming from Ambience Mall and Nathupur are requested to take Cyber city road till Sikanderpur and then take MG road to reach Iffco chowk. 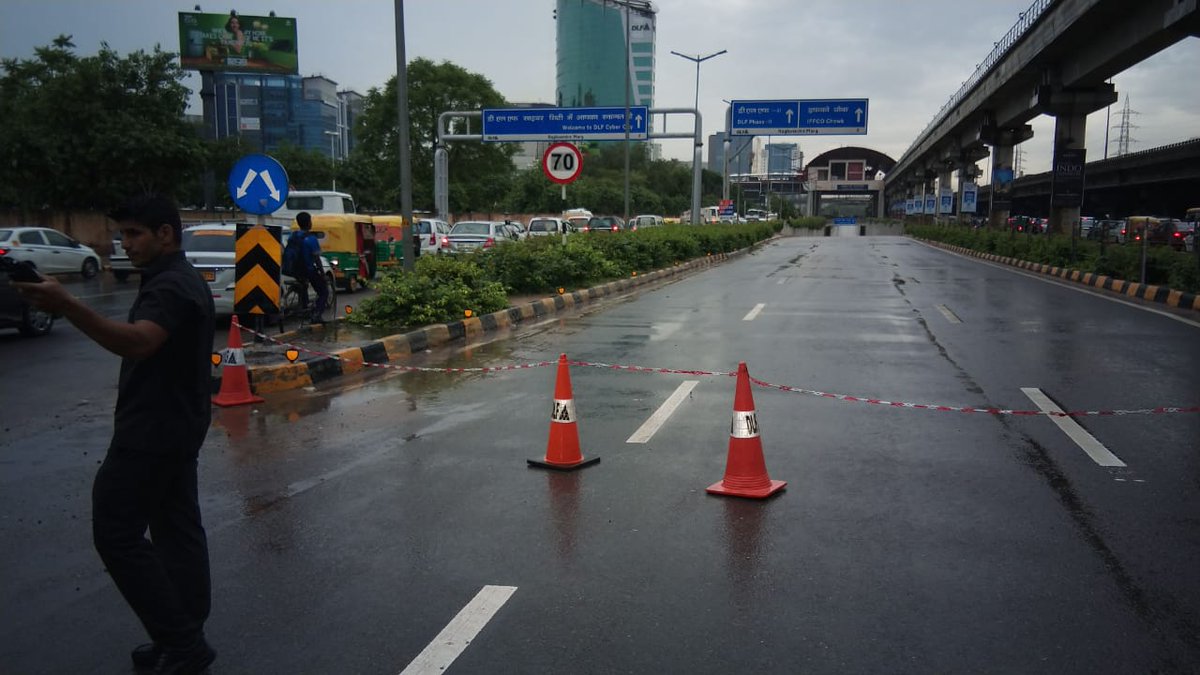 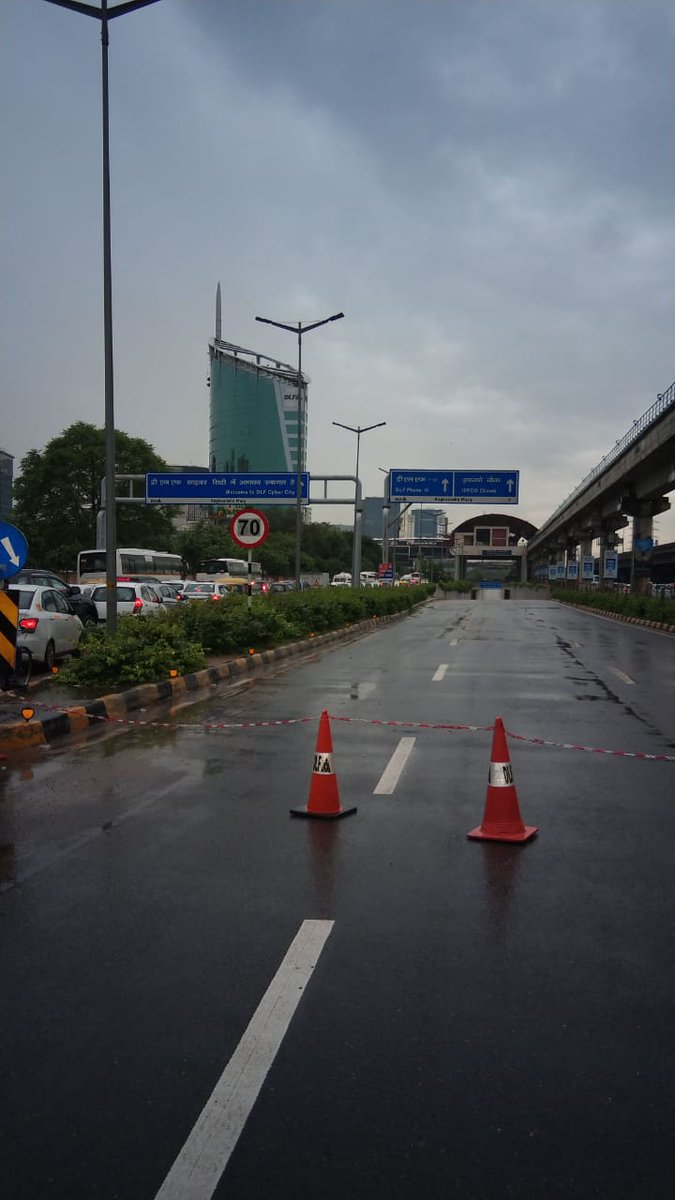 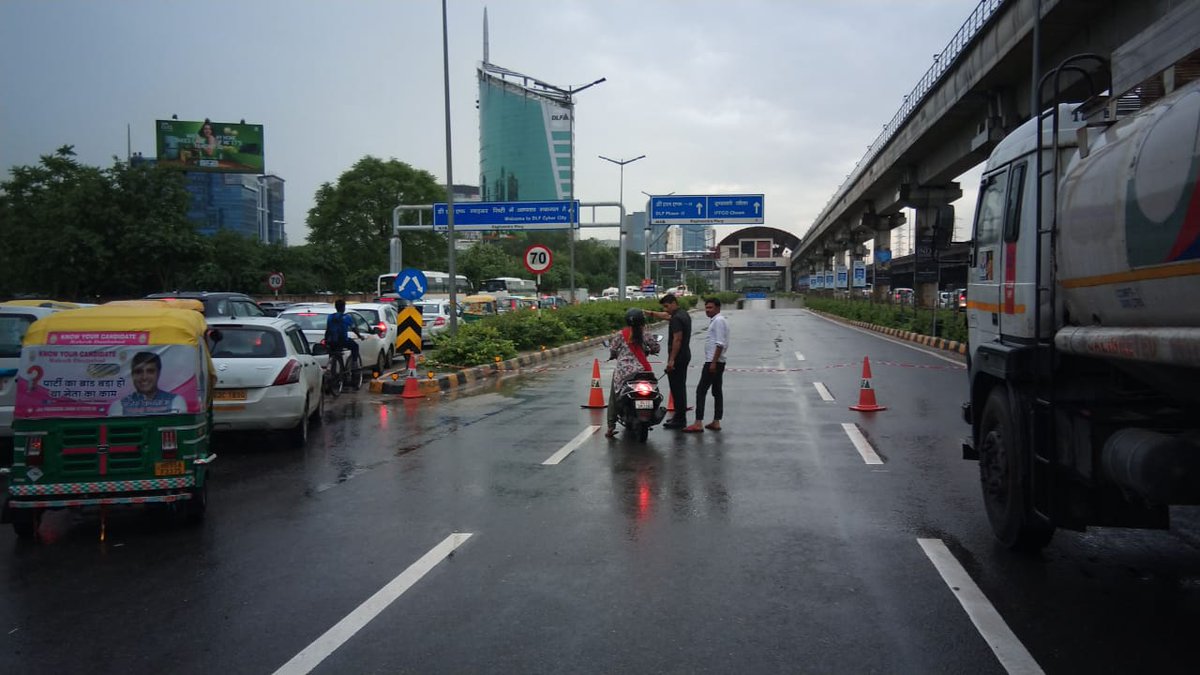 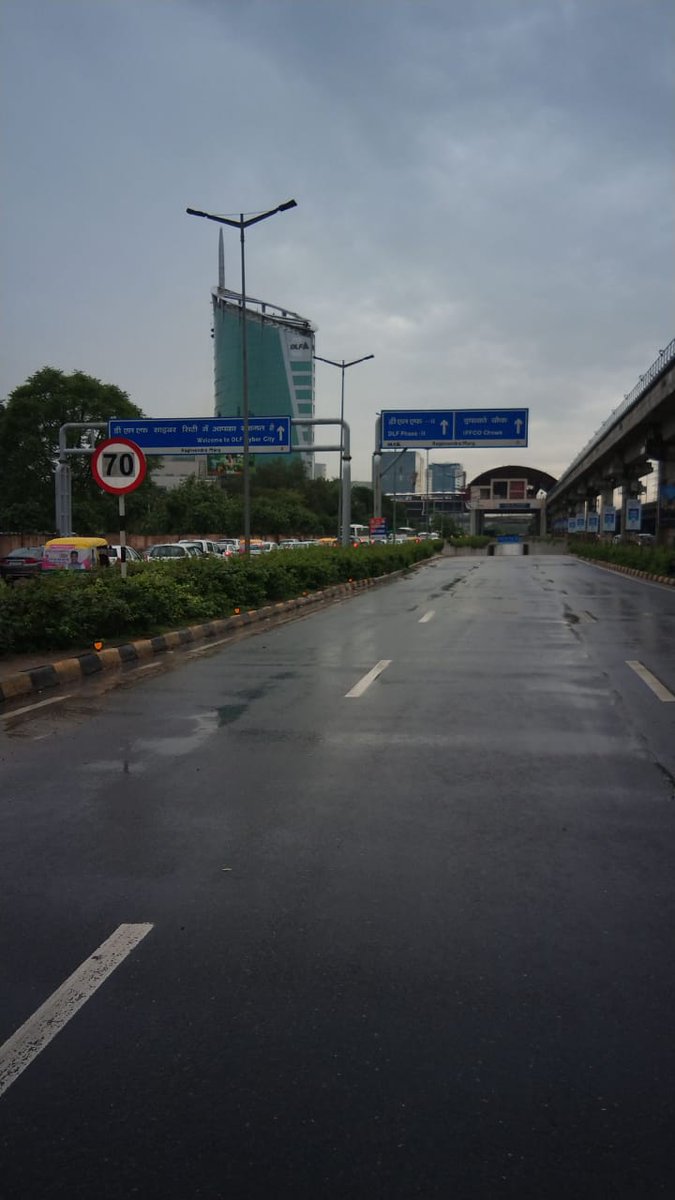 All moving towards Punjab 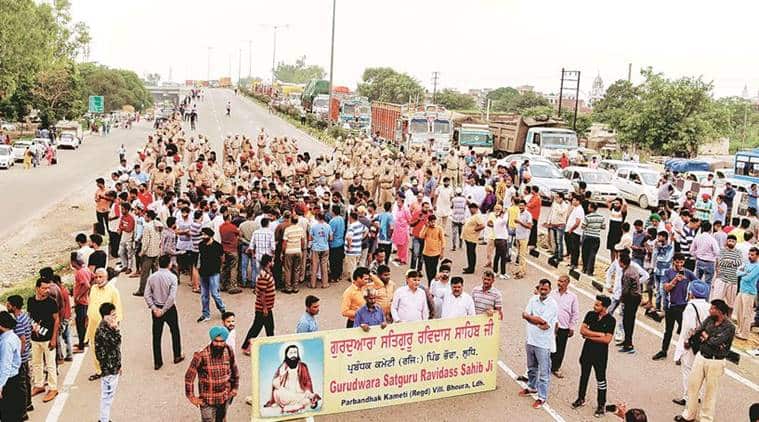 During the protest on the National Highway near Jalandhar bypass in Ludhiana. (Express photo by Gurmeet Singh)

Dalit outfits called for a statewide bandh in Punjab on August 13 to protest the recent reported demolition of the Sri Guru Ravidas temple in Tughlakabad in Delhi, on the order of the Supreme Court, even as Punjab Chief Minister Amarinder Singh on Sunday appealed to Prime Minister Narendra Modi to personally intervene to resolve the tension.

The Chief Minister’s appeal came after state-wide protests by members of the community, under the banner of the Guru Ravidas Jayanti Samaroh Samiti. The Samiti has also announced that it will observe 15th August as a “Black Day”.
On Sunday, All India Adi-Dharm Mission and Sadhu Samaj president Satwinder Heera held a joint press conference with president of Sadhu Samperdaye, Sant Sarwan Das, in Jalandhar. Both announced that the Sadhu Samperdaye Society, Dr Ambedkar Sabhas and other Dalit organisations in the state will observe a bandh on August 13. They said they will also observe a one-day protest at the Jantar Mantar in Delhi on August 21. About the August 13 protest, they said that peaceful demostrations will be held across the state.
On Saturday, National Highway-1 was blocked at several places by members of the Ravidasia community.

Taking serious note of these protests, the CM, in a statement said that while he did not wish to comment on the SC judgment and that he was personally not in favour of demolition of structures of historical importance.
He appealed to the community to call off their protests as his government was ready to extend its full support to them to get the matter amicably resolved with the Centre. While appealing to the Prime Minister to step in for a resolution, Amarinder also spoke to Union Urban Development Minister Hardeep Singh Puri to seek re-allotment of the same site, which reportedly belongs to the Delhi Development Authority, to enable the community to reconstruct the temple.
Extending legal and financial assistance to the community to take the matter forward, the CM constituted a five-member committee to meet religious and political representatives. The committee consists of MP Santokh Singh, and MLAs Charanjit Singh Channi, Raj Kumar Chabbewal, Aruna Chaudhary and Sushil Kumar Rinku.

If coming from Swarghat to Ambala (Delhi) or vice versa,
Take this route :