Bangalore to Allahabad on an RC 390

I finally completed my trip.

I started on 9th march at 4 am from Bengaluru, and took a stop at Nirmal, after Nizamabad for night halt.

Roads in Madhya Pradesh are not so good with lunatics driving around thinking they own the road.

I even had an ugly spat with a truck driver since I was frustrated after being forced to get down of the road on curves where it is dangerous.

Third day, I started at 12 p.m., from Maihar, reached Allahabad at 5 in the evening with lots of stops for samosas and all.

as far as I know, before starting this trip, no one has taken a RC 390 to Madhya Pradesh, or to this route from Bengaluru to North India.

and if someone had, it is not documented on any of the travel forums, like the one here, or xbhp, or teambhp.

I know of some guys from Kerala going to Leh, on RC 390, I missed out on that chance since they were the first to take RC 390 in India (obviously in the world too) to Leh.

There is no point of being in the race to take RC 390 now to Leh, since if it's not the first, I can take it this June season and hence no sweating on that topic now.


I will write some points.

. My relationship with myself improved further after this trip. That is what drives me to take all these rides. It's like meditating at 170 kmph.

. I have been riding bikes since a long time now and have been to Nepal twice, Khajuraho, from Lucknow, in and around every place that has a motorable road near Bangalore, even Goa from Bangalore on RC 390 but I have never felt the need to document anything online. But this trip, this is a special trip for me. It was my first solo endeavor above 1000kms and I came out with flying colors (well i still can't rinse a lemon that hard since fingers took the toll of the driving in Madhya Pradesh roads.)

. RC 390 has a riding stance that most people like to term as an aggressive stance. I have prepared myself to take the ride by doing lots of shoulder and back exercises before the trip, during the trip and still doing. I personally feel, on an RC 390, if you learn to sit right, you can enjoy the trip as opposed to the general consensus that RC is a track bike and not good for long distances. I squeezed an average of around 23-24ish km per litre , and always had a fuel station when I got the low fuel warning. Yes, RC 390 can be taken to long distances and anyone claiming otherwise is just finding excuses. (of course you need to have a petrol bunk every 200kms, but isnt that something that should be ignored on highways since you do get a petrol bunk on a 200km run from wherever you are on a highway.)

. After riding for around 8 hours with just 5 mins stops in between, bike did showed the temperature warning for the first time, so yes, pushed the bike to its limits and it did gave up after 830 kms in around 16 hours. I had to take a major detour since bikes are not allowed on Nehru ORR and hence I went through the city traffic of Hyderabad and Secunderabad and that did cost me more than 2 hours because of the metro work going in Hyderabad and yes, people in Bangalore have far better traffic sense than people in Hyderabad. (no offense meant)

. Where's the fun if you won't take your RC to yummy speeds I got highest speed of 173 kmph. i was carrying a sling bag that I kept on the tank of the bike so as to avoid any strain on shoulders. I could have squeezed an extra 3-4kmph more speed (or velocity if you are nerd ) but I am happy with the current top speed.

. Ride was safe, except in Madhya Pradesh, and yes, if you can take your bike through Madhya Pradesh, you have achieved a feat. There are thingies that we call potholes, and then there are craters hahah. Come to MP, have a look at the craters and the lunatics driving around the road thinking they own the road.

. I took a detour in Madhya Pradesh, Hanumana, and was taking a curve at around 143 kmph , when there was a bump on the curve itself. Bike wobbled and I could right then smell a pungent odor that resembled like petrol. I managed to control the bike and parked it and checked for any damage but I could not see any visible damage. And while I was checking the bike's condition, all those Dusters, Corollas, etc etc that left behind me at speeds above 140 kmph, went past me and it was a panful sight to see. I later realized that I have broken the oil seal of front shocker and I got it changed once I took bike to servicing.

Thanks everyone for their advise and I really appreciate it.

One thing I would like to mention, I experimented with Whey Protein shakes on this trip. I carried whey isolate and drank it three to four times a day. Not exactly the amounts that is taken in workouts, but that amount over four servings. It did helped me to keep off the muscle pain and all and I think body did recovered faster than the trip in Goa in which I had to rest for around 4-5 days after a total trip of 1720ish kms in with lots of beers too. Not exactly an good idea to drink lots when you are on a bike trip, but then, Goa is Goa. 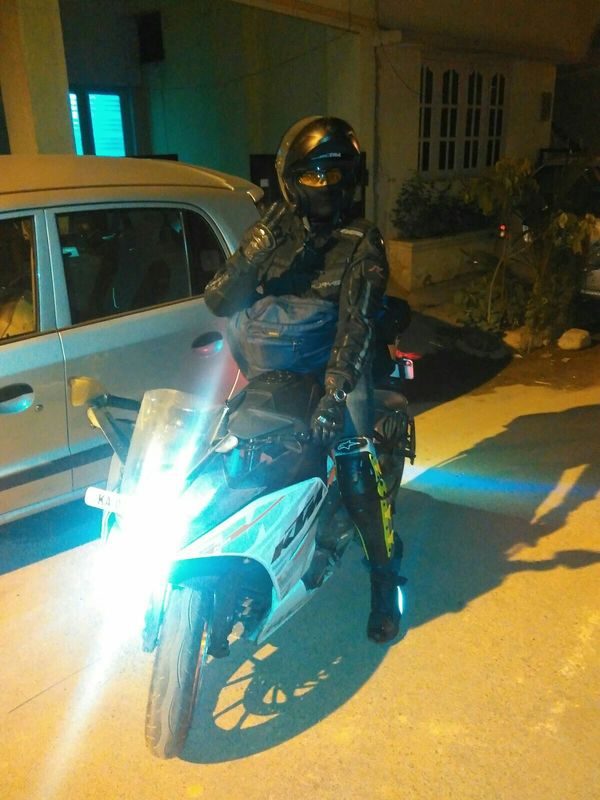 This is me with the bike at 4 am in the morning, leaving my home in Bangalore.

I use these sports goggles since I save myself from closing the visor then. LS-2 Helmets , once closed do offer a very quiet ambiance. They are very good for night riding and you can buy them at Decathlon, and even online since snapdeal now sells Decathlon products online. I used a sling bag so that I dont have to take pains to tie it down to the tank, it was very good experience for my back and I will carry this sling bag always now for all of my bike trips as opposed to carrying a backpack.


These goggles are very good and you get 4 shades with them that you can use in accordance to your riding needs. Wear the gold tint one at nights, or dusk, the road does seems brighter at nights, do try if you are into night driving.

First day, I started from bangalore at 4 am, and made a target to cross Hyderabad and then stay for the night.

People here recommended to stay in Adilabad but I was not sure if I could ride that much in a single day.

I could have done more but decided to take a halt. 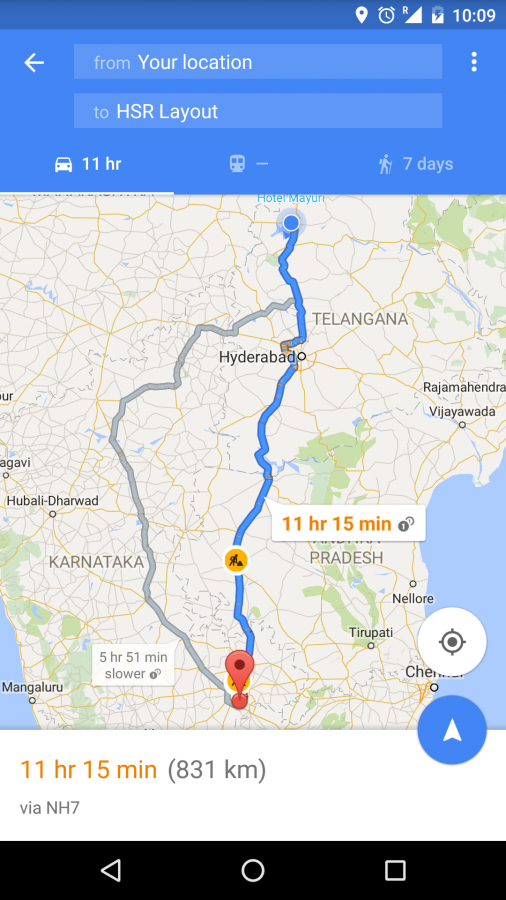 that is the hotel Mayuri's location in Nirmal. it is a good hotel with basement parking available too. 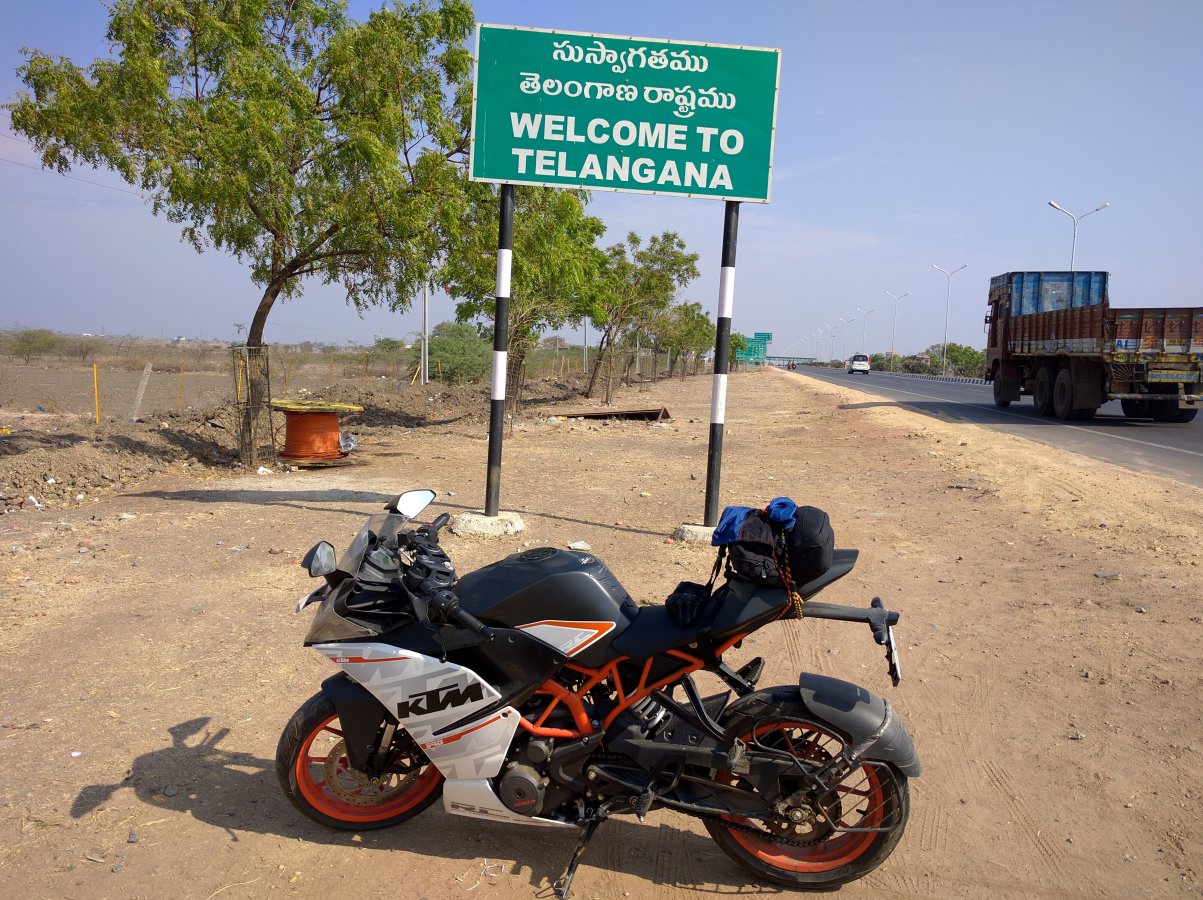 I used bungee cords to tie a bag full of clothes and meds and other utilities. I used two bungee cords and I realized I dont need to carry saddle bags and all now. I can fit things that I need on a bag that I can tie on the backseat with bungee cords and one sling bag with utilities.

one of the reasons that I had to take a stop at Nirmal because of this. 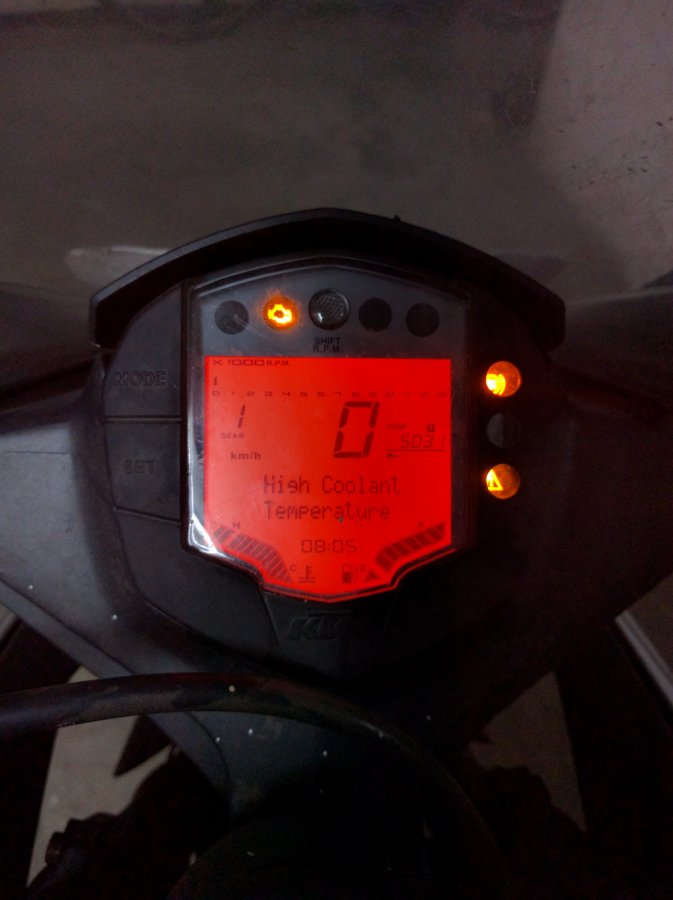 Bike was showing overheating sign and I had to take a stop then. I could have stretched to Adilabad the first day but then, its better to rest , since bike needed it too.

After I took the hotel, I took a shower and went out to have dinner. I reached Nirmal at 7.40 pm and could have gone to Adilabad by 12 midnight or before , going by the speeds I was cruising.

I had my protein shakes, and after talking to family and friends , i slept. Protein shakes really helped me on this trip since I could feel much better when I woke up the next day at 4 am for the trip to Nagpur.

Here is the Dhaba of Sardarji who advised me to stay at Hotel Mayuri in Nirmal. Thanks Sardarji, it was a good hotel to stay. 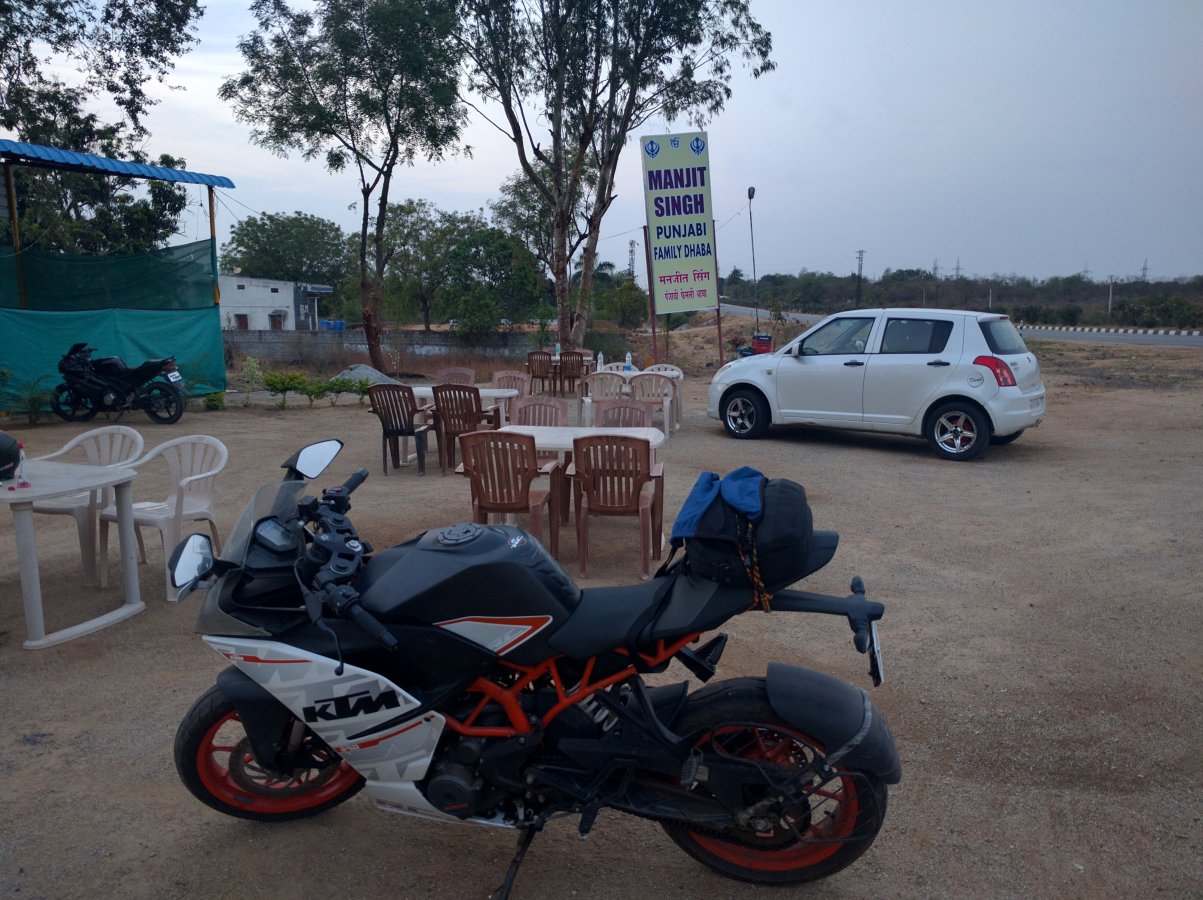 Next day, I started from Nirmal and continued to Adilabad.

There was a deer on the road and to my surprise, it stopped after seeing my bike. I quickly took of gloves and took out my phone to take a snap of it, but the deer was too quick for me it seems It got away. I took a stop at a dhaba and had an omlette with my protein shake and saw 4 people taking turns to take pics with my bike.

After few pics, someone came up and said, "Hayabusa se tez to nahi chalti na" ( it wont go as fast as Hayabusa)

seems there are racing people everywhere, or those who wannabe.........


Normally I ride peacefully, with nothing above 90-100 kmph. But when someone blows past me, I just cant take it.


so was involved in a race with a corolla from Adilabad onwards to nagpur and finally overtook at 163 kmph whole thing ended in like 10-15 mins. 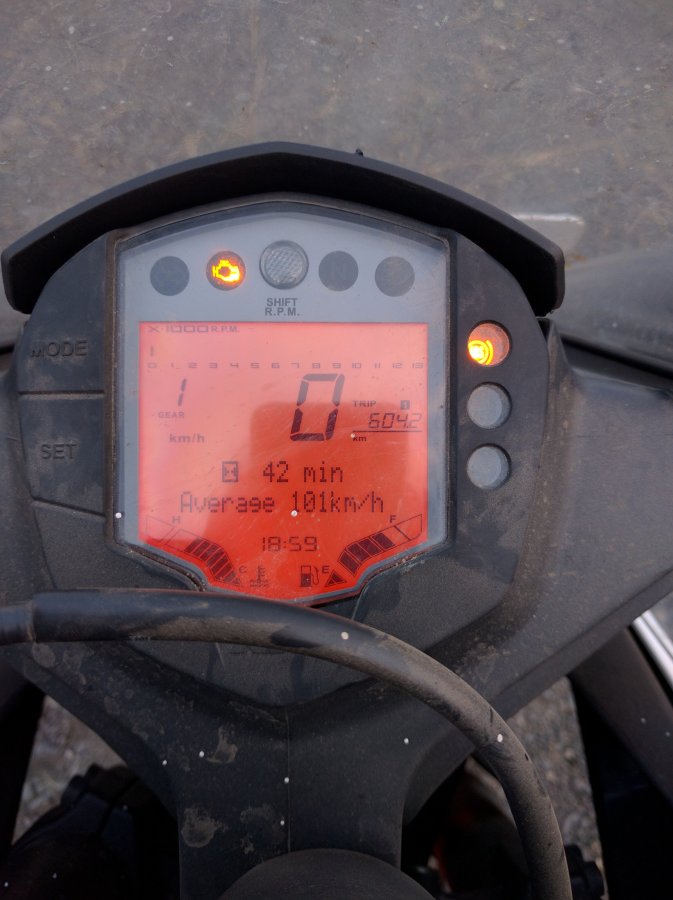 I then continued without any stops and then stopped to remind me of the fact that roads can be brutal too. 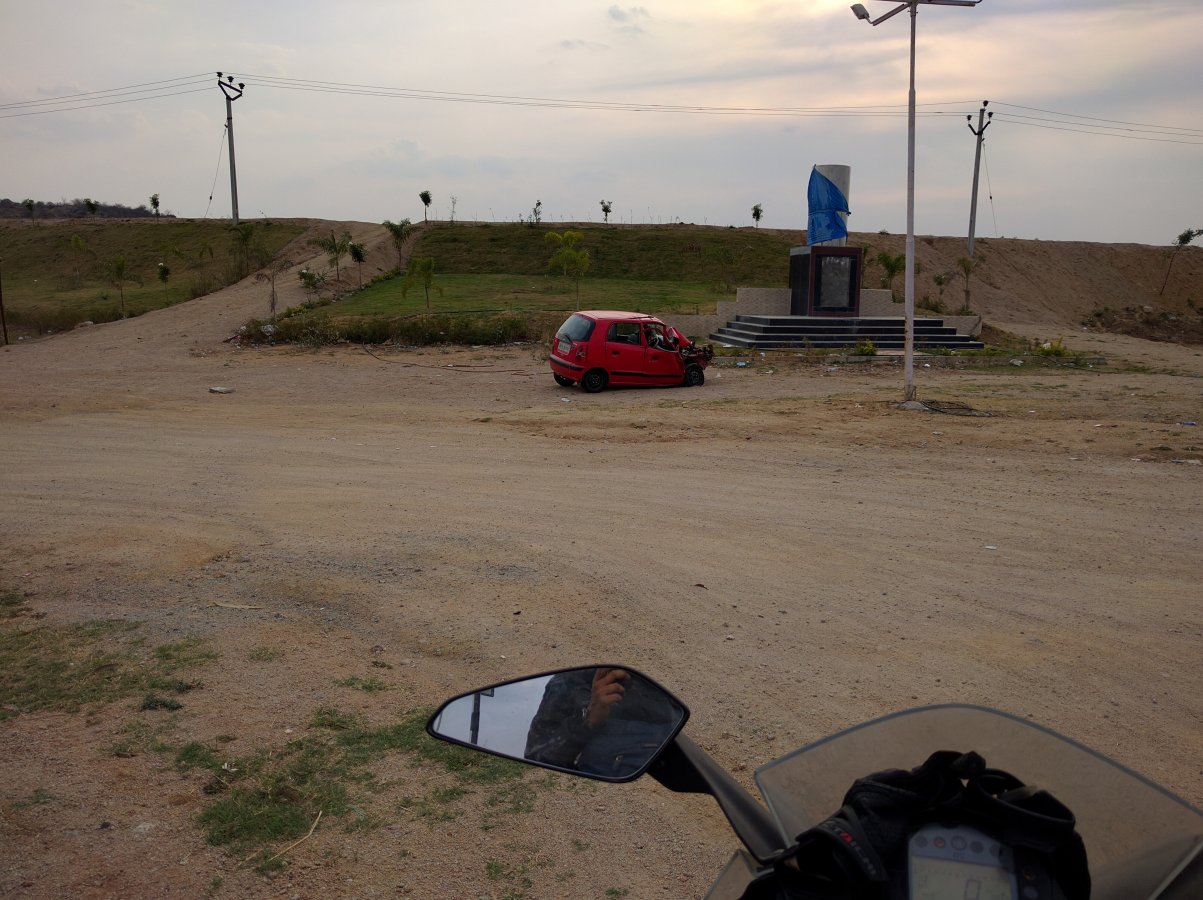 I reached nagpur, had a stop for redbull and snickers and then continued .

made a target to reach Rewa tonight and then take a halt.

I was shocked to see the state of this state and I will write up more.

I dont have so many pics since but whatever pics I have, I will upload them here.

I was shocked to see the state of this state and I will write up more.

I dont have so many pics since but whatever pics I have, I will upload them here.

Great to know that you did it safe & sound. Share more details about MP.

Did you face any unexpected & unwanted attention from local heroes because of your bike or appearance?

Did you apply for Limca book of records yet ?

Your bike is super, your ride is so super, but chasing is not super, safety first man, we need you for more narrations and travelogues.

Ankur003 said:
Did you apply for Limca book of records yet ?
Click to expand...