Yogesh Sarkar said:
Planning for Pushkar then or somewhere else?
Click to expand...

me too wanted to see pushkar mela this year but

Forgive my ignorance.. but help me to understand what's special in Pushkar...I been there once when we were at Ajmer for a sports tournament during collage ...there is Brahma temple...a lake and foreigners come to Pushkar for pot.. that's it.. infact that what I find from my 4 hour trip...please help me....I am eager to change my mindset about pushakr and visit it once again...but for what??

i think at the time of the pushkar mela the whole scene changes and its a very colorful event.


smoothwanderer said:
me too wanted to see pushkar mela this year but

Thank you. Hopefully, I'll visit Pushkar again next year. Not sure if it would be at the mela time though.


SJM1214 said:
Forgive my ignorance.. but help me to understand what's special in Pushkar...I been there once when we were at Ajmer for a sports tournament during collage ...there is Brahma temple...a lake and foreigners come to Pushkar for pot.. that's it.. infact that what I find from my 4 hour trip...please help me....I am eager to change my mindset about pushakr and visit it once again...but for what??
Click to expand...


smoothwanderer said:
i think at the time of the pushkar mela the whole scene changes and its a very colorful event.
Click to expand...

Yes, during the mela time it is altogether different scene.


I woke up lazily around 8 am and when I looked out of my room’s balcony, I saw several peahens downstairs, who ran away before I could unlock my phone.

The sun was out in all its glory and even though it was a little bit foggy, it was a beautiful morning. Around 8:30 am I called Neha and asked her and Narayan to get ready. By the time we had breakfast at RTDC Sarovar (breakfast was included in tariff), it was already 11 am. I had to check out of my non-ac room and shift to an AC room, since at the time of booking, non-ac room wasn’t available on this date.

I had already placed my luggage in Neha and Narayan’s room and after paying the GST and checking into the most beautiful room of the hotel, I headed outside and waited for Neha and Narayan to arrive.

The duo had gone to the Shri Vaikunth Nath Swami Temple and came back with large tikas on their forehead and dressed in the clothes they had bought yesterday from Pushkar. We hopped into the Brunello and headed for Ajmer. Even though the route was crowded, we managed to reach Ajmer fairly quickly and decided to travel to Ajmer Museum and fort.

Unfortunately, the route Google Aunty directed us on, took us directly to Delhi Gate and the narrow route through the bazaar Google was telling us to proceed on, was closed. So after a bit of effort, we took a uturn and a took longer yet wider route to the museum, housed in the Akbar Fort.

After parking the car in parking lot, we headed for the museum, which opens at noon and we were right on time for that.

Just as we were about to buy tickets, a cavalcade of grooms atop horses caught our attention. It seemed that they were all heading to some mass wedding in Ajmer and it was quite a sight and something one doesn’t get to see in places like Delhi. The Fort seemed less of a fort and more of a Palace to me and it was beautiful inside though fairly small. However, strangely one isn’t allowed to take photographs here with a DSLR or digital cameras but photography with mobile phones is allowed!

This rule seemed ridiculous, but with guards on every nook and corner of the fort, we had to abide by the stupid rule and apart from a couple of photos with my DSLR when no one was looking, rest of the photographs were shot with my Honor 6x.

The museum located inside the fort had an impressive collection of paintings, sculptures, manuscripts and even weapons and coins on display. However, apart from the museum and the Diwan-i-Khas (which too was mostly closed off), there wasn’t anything else to see at the fort and hence we came out barely an hour later. By the time we came out, it was almost 2 pm and I was beginning to feel hungry since all I had for breakfast was bread and butter. Neha tricked me by saying let’s try some street food, then googled something and set the navigation on her mobile phone and we started walking through the narrow alleys of Ajmer. I initially thought she had found some restaurant, where we were going. I later found out, she had set navigation for the Dargah and the Google Aunty took us on a walk, far longer than a kilometer it showed initially!

Eventually, after asking locals and getting lost for a bit, we arrived at the Sharqi Gate of the Dargah. Now that we were here, there was some confusion. Neha thought it would lead us to the main bazaar, where there would be restaurant. However, it didn’t and the restaurants around us didn’t look appetizing to her (she is vegetarian and all the restaurants had mostly non-veg dishes). So after asking around, we headed towards the main entrance of the Dargah and it was extremely crowded. 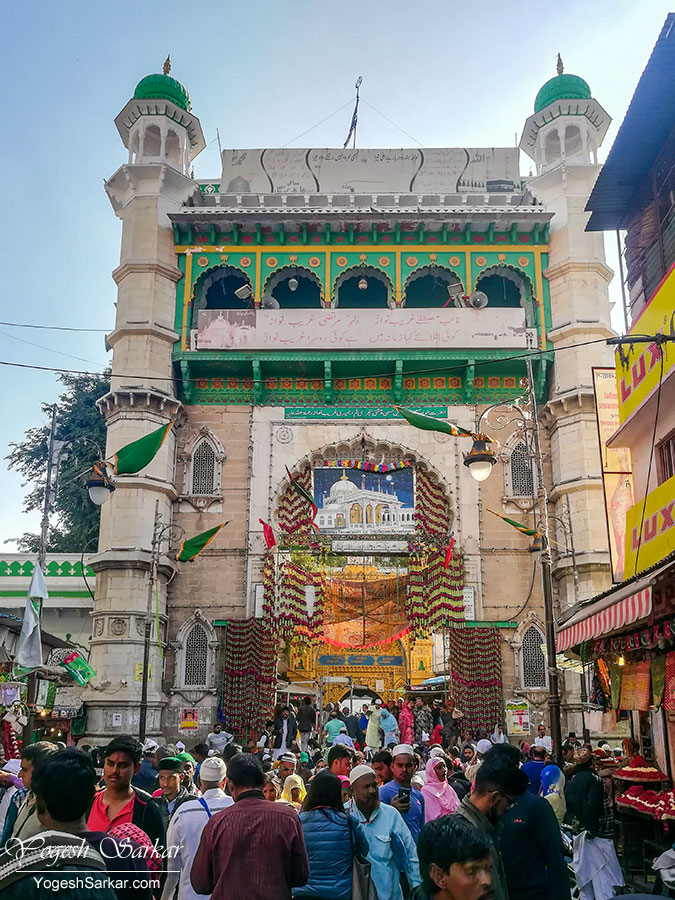 So we eventually decided to have lunch at a hotel around Delhi Gate and after lunch, took an auto rickshaw back to the Akbar Fort parking for Rs. 60. After picking up Brunello, we decided to roam around Ajmer. The only caveat being, we wouldn’t try and enter a narrow street. After a bit of getting lost and changing our tracks, we finally managed to reach the Ana Sagar Lake.

Even though the sun was fairly harsh at this point, the lake itself looked beautiful. After taking a few photographs, we decided to do a recce around the lake and found an impressive looking Hotel, Merwara Estate atop a small hill. So we drove in, planning to check out the hotel and have some tea.

The Sizzles Restaurant in Merwara Estate offered a panoramic view of the Ana Sagar Lake and Daulat Bagh. Sadly though, apart from tea, coffee and lassi, there wasn’t much available at the restaurant. Though to be fair, Cold Coffee was good and the priced almost similar if not less than the coffee at CCD and that too with a good view.

By the time we got back inside the car, the sun was beginning to set. So we drove back to the Ana Sagar Lake and photographed the sunset occurring behind the Rishi Udyan, where Maharshi Dayanand Saraswati had taken his last breath. Even after the sunset, the lake looked quite serene. Although I would have loved to spend more time there, I was eager to head back to Pushkar, since we had to meet Rahul and Sowmya. Add to that we had to stop at the Maharana Pratap Statue for the panoramic view of Ajmer.

Situated along the Ajmer – Pushkar route (the one through the hills) the monument is beautifully made and illuminated at night, with a panoramic view of Ajmer. Apart from parking, there is no entrance fee. And when we reached there, it looked oh so beautiful and majestic. As I expected, I got a beautiful view of Ajmer City from the monument and happily spent more than half an hour there, doing photography. In the meanwhile, Rahul and Sowmya had done with their sightseeing and were waiting for us at the sunset point.

So we hopped back into the car and drove back to Pushkar. I had to change my shoes because my feet were beginning to hurt. While Neha and Narayan decided to change jackets and freshen up, before heading out. In short, we kept Rahul and Sowmya waiting for a good one hour after the last call.

We met them at the sunset point and then decided to walk to the Payal Garden View Restaurant for dinner.

Big mistake, since the ownership of the restaurant, had changed and the new staff couldn’t even make dal taste good, forget about anything else. Eventually, we walked out of the hotel, with some of the food packed, in order to give it away to some hungry soul. Though with the food so bad, I wonder if we would get blessings from the poor or curse?

Once we eventually made it back at the hotel, all of us went to my room and sat in its fairly large balcony. With the cool breeze of Pushkar, wonderful stories and delicious peanuts bought from a street vendor, hours flew past, before we realized it was time to hit the bed.

After dropping Rahul and Sowmya to their hotel, we retired to our rooms. However, it wasn’t before 2:30 am that I could fall asleep.

Hey, Love the picture that you taken.. Just need some advice how you add watermark.. is there any software or tool or any website. Please suggest I am looking for personal use.

varunindia88 said:
Hey, Love the picture that you taken.. Just need some advice how you add watermark.. is there any software or tool or any website. Please suggest I am looking for personal use.
Click to expand...

Thanks. I generally use Photoshop/Lightroom to watermark my images. You can even use MS Paint to do the same if you want, though there will be loss in quality. Here is how to do that Watermarking photographs pointers needed.