i liked the snap of neha & narayan with ajmer city in the background,the most.
Click to expand...


After everyone else had left last night, I had tidied up the room, took a few photos of it for review and had then taken a couple of long exposures of the Pushkar Lake. 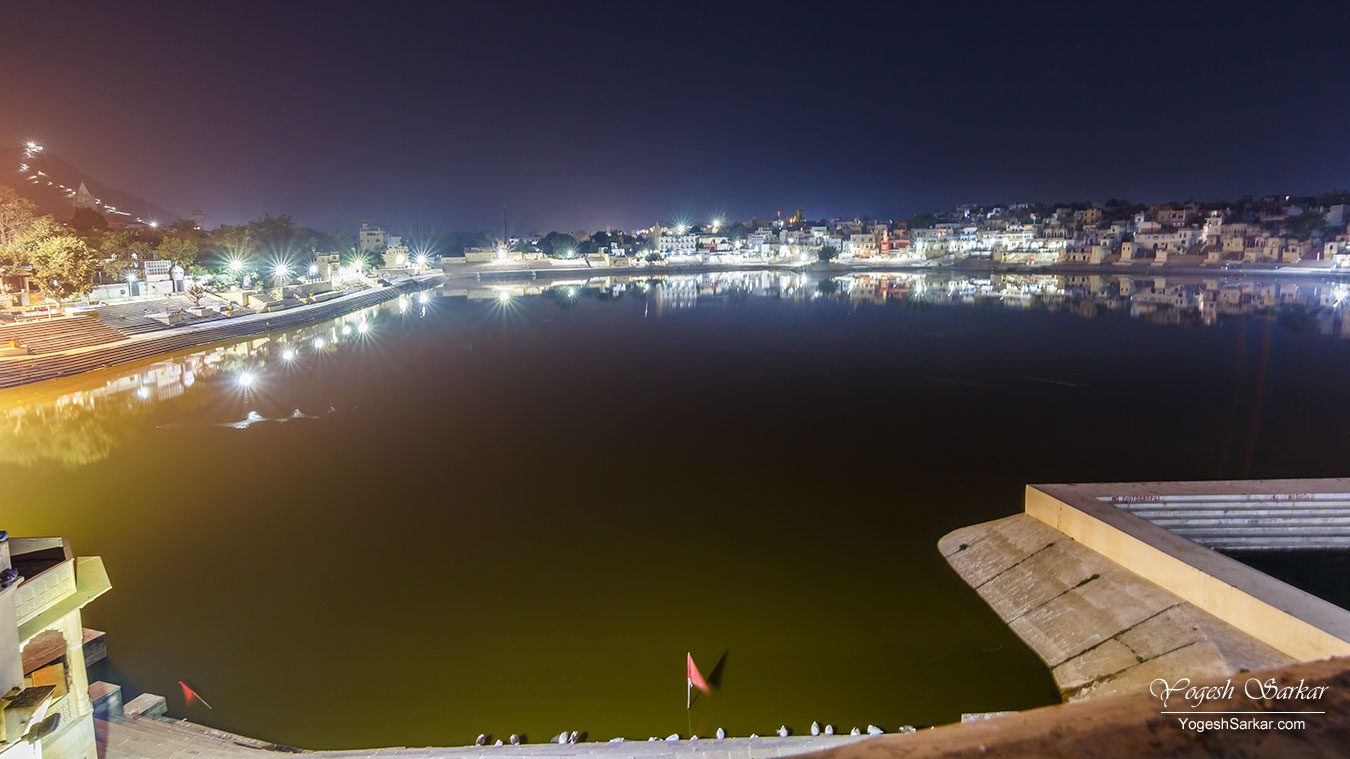 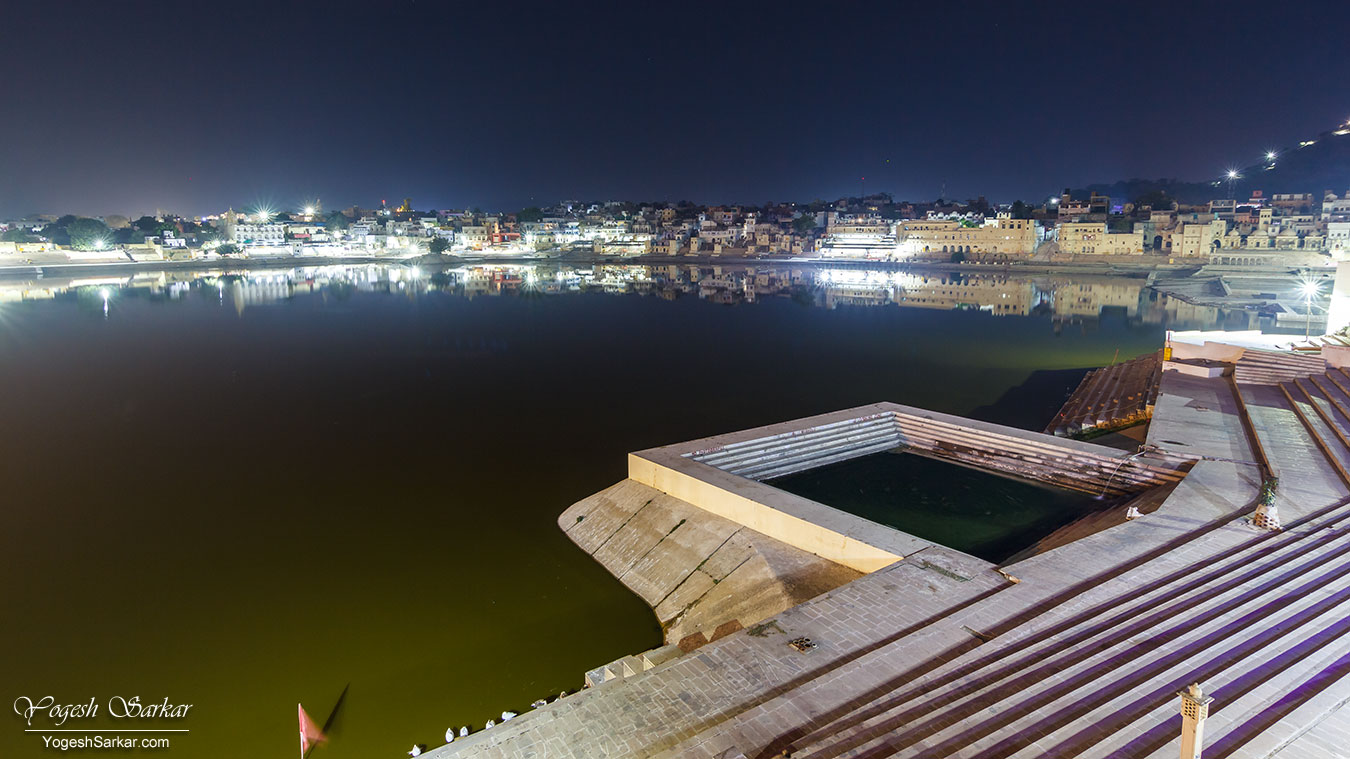 I woke up quite late in the morning, around 9 to be precise. Since the single window in my room (apart from one used for window AC) had wooden panes and they had kept the sunlight out, making the room perfect for anyone who loves to sleep in.

I woke up and went out to the balcony, the Pushkar Lake looked alive with people and birds and the buildings and temples on its banks looked fabulous as ever. So I did something I hadn’t done in a long time; I took a 180-degree panorama of the lake from my balcony.

Of course, even the wide angle shot showcased the beauty of Pushkar Sarovar aptly. 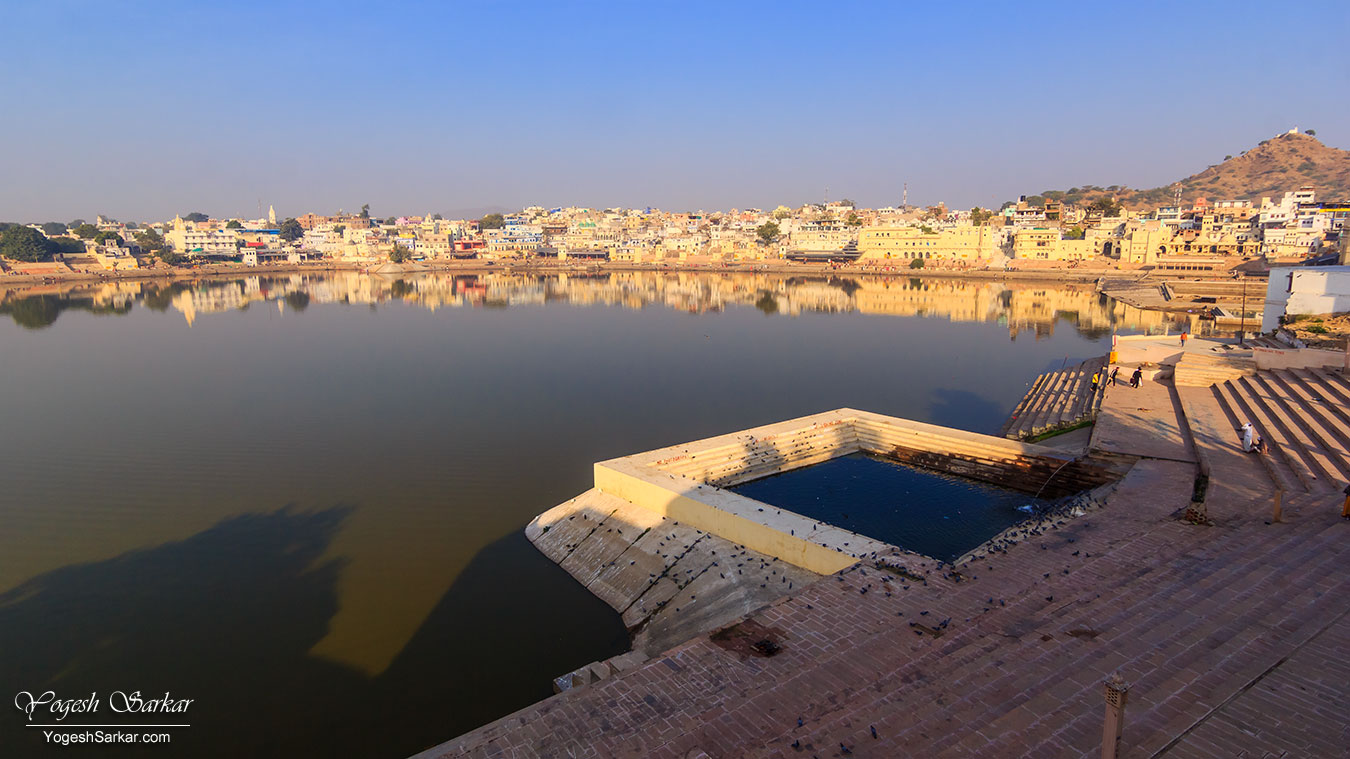 By the time I got ready and went outside my room, it was almost 10:30 am and the courtyard of the old wing looked beautiful, bathed in the sunlight. 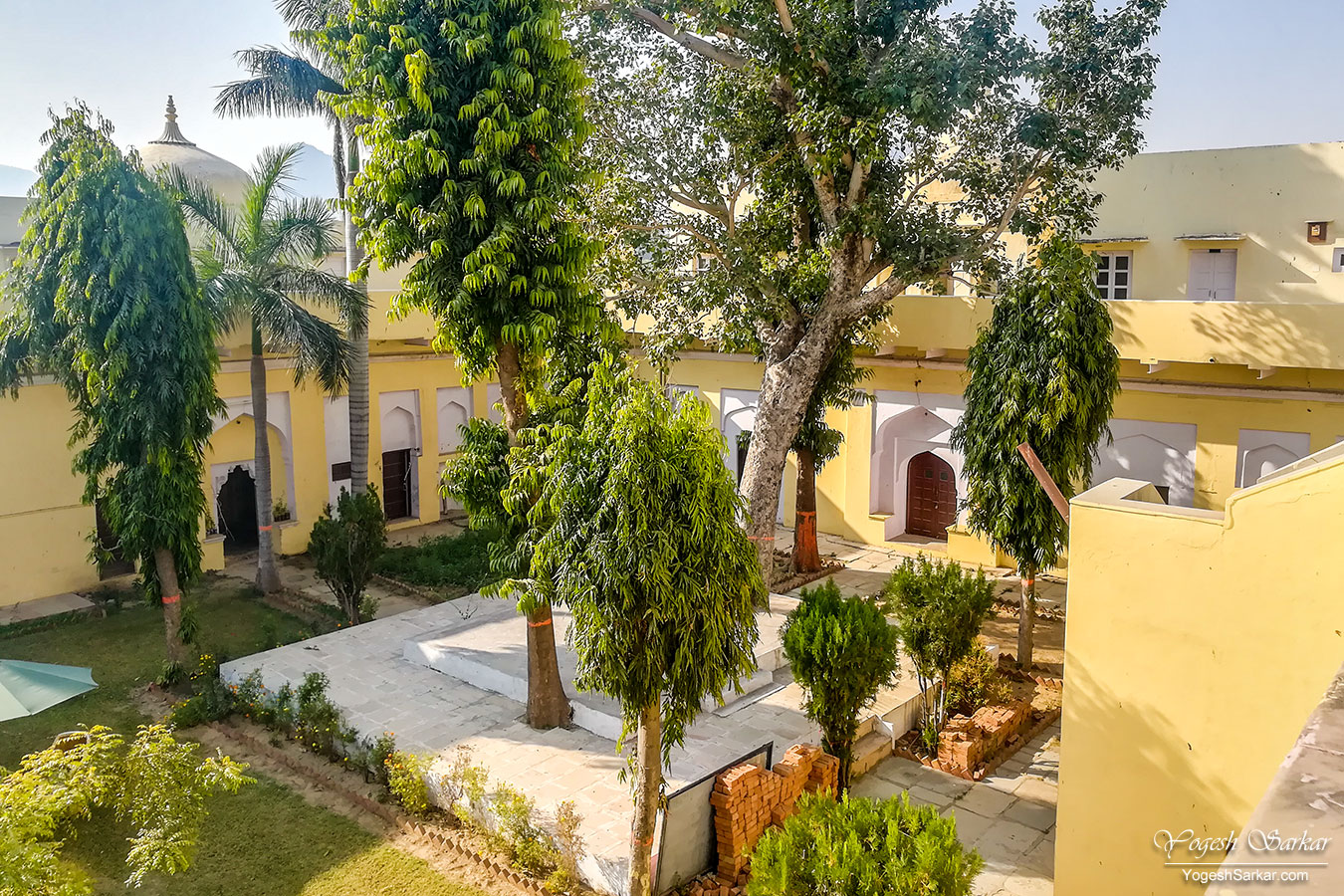 After having breakfast, we were all set to go to the market. 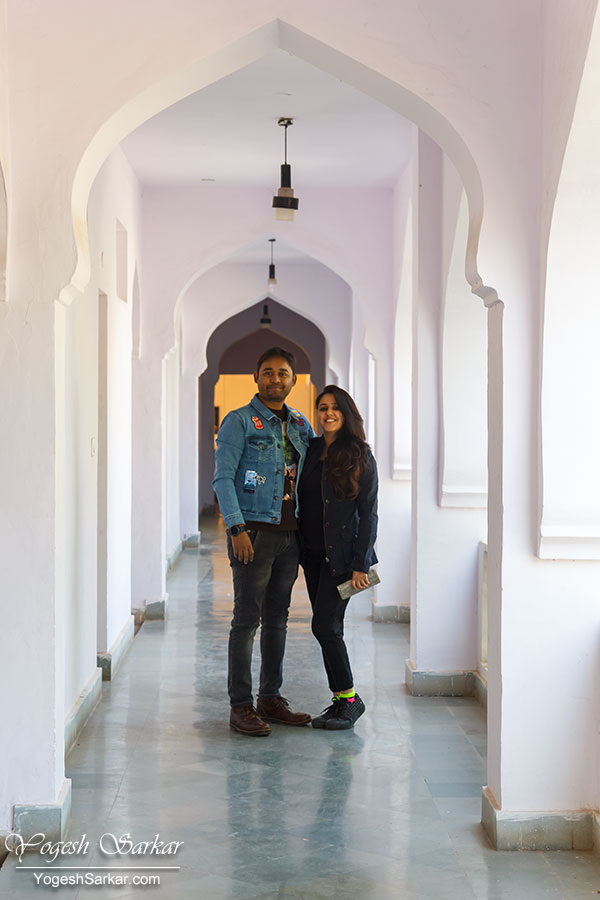 Today there was nothing on the agenda, except to explore the streets of Pushkar and do some shopping.

I had barely gone a few hundred meters that someone called out my name. Turns out, it was Amit Magoo and his wife, Aanchal. The duo had been in Pushkar since Saturday, just like us and were even in Ajmer yesterday. But as luck would have it, we only ran into each other, today.

We talked for a while, strolling through the streets of Pushkar and then decided to head to Café Out of the Blue since it used to serve good coffee. But today, the coffee left a lot of to be desired. Though conversations were quite fun on their rooftop café and time flew by.

Since Aanchal and Amit were driving back to Delhi today, it was time to bid adieu to them. 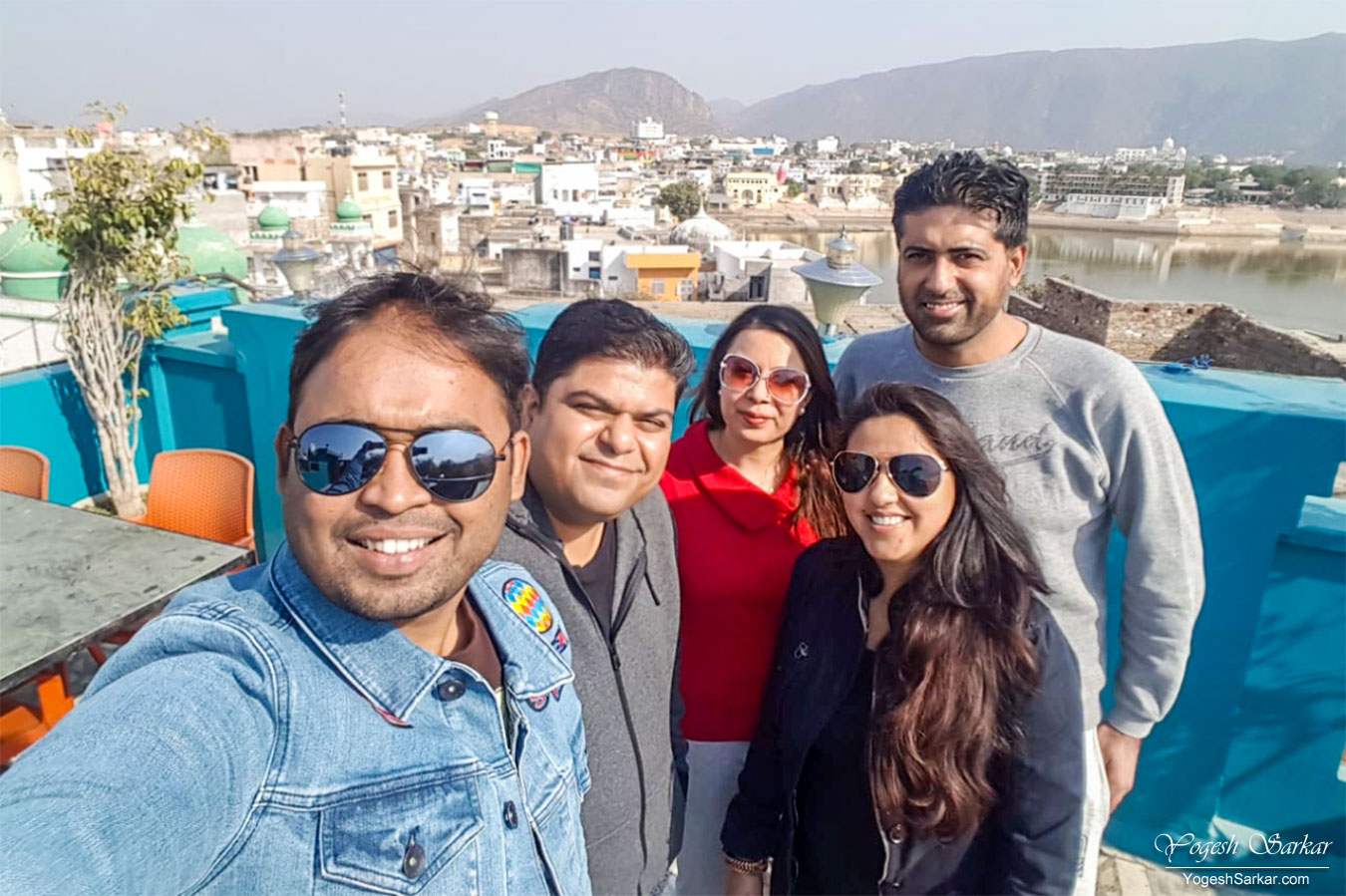 Neha, Narayan and I decided to stay back at Out of the Blue since the photos were coming out quite good there and even our hotel was visible from their rooftop. 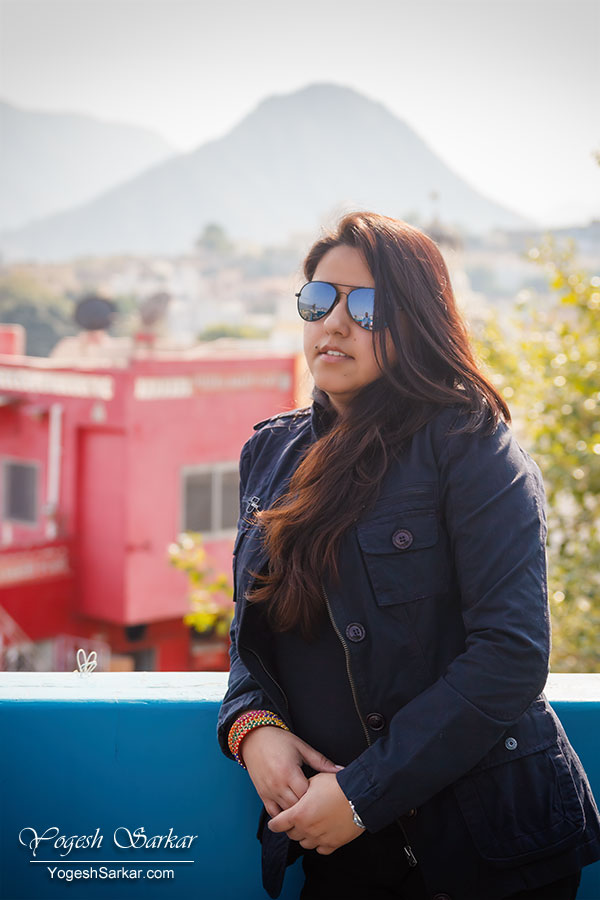 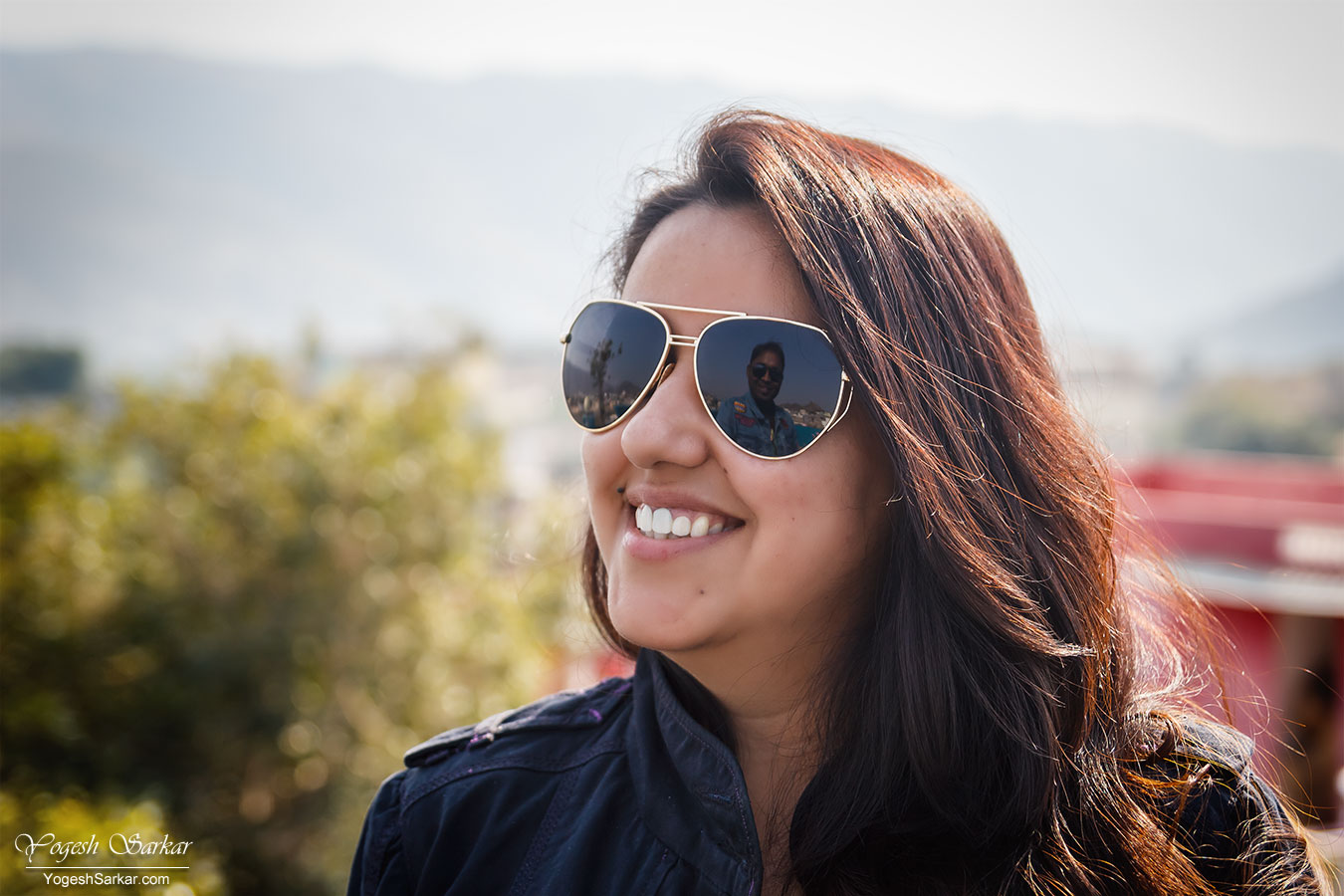 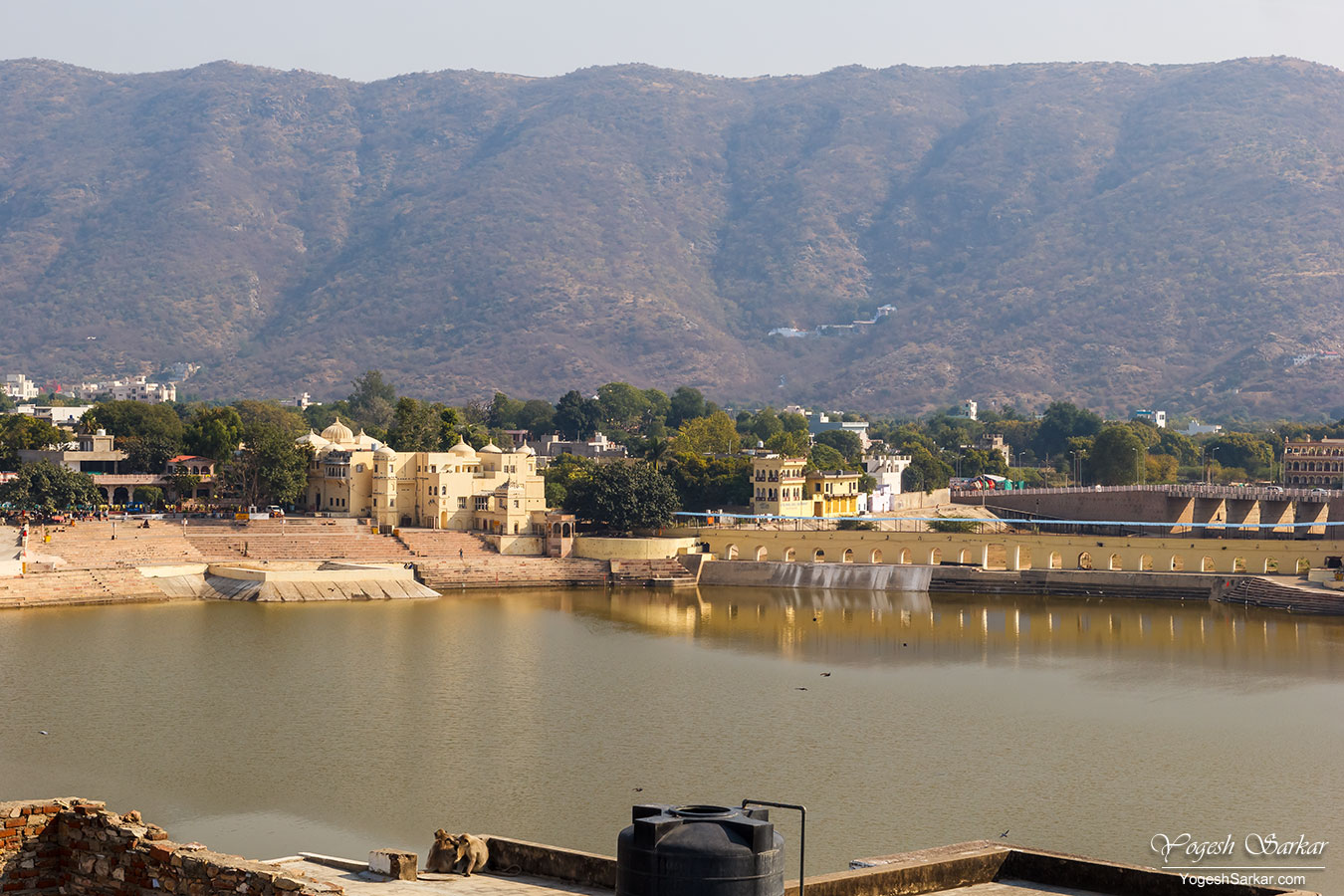 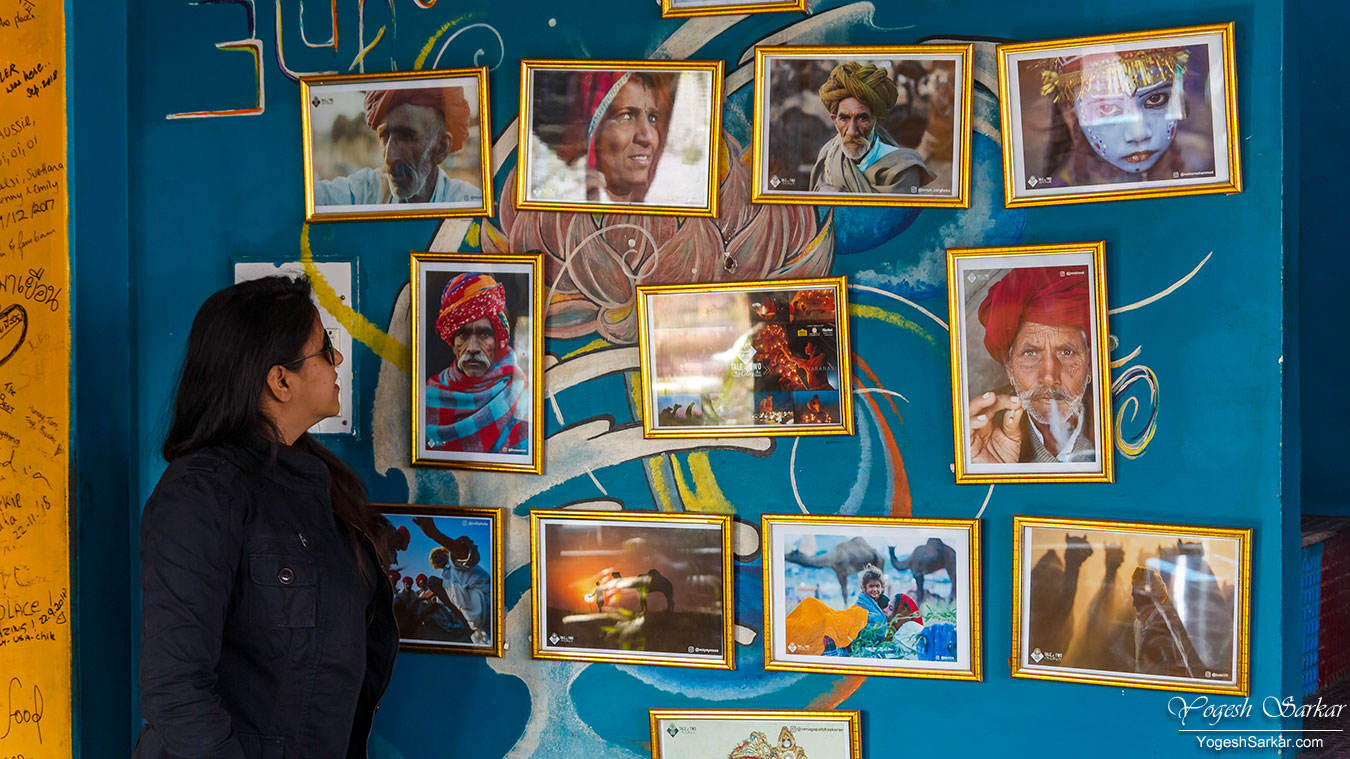 After a while, we too moved out. Mainly because we had to go shopping. 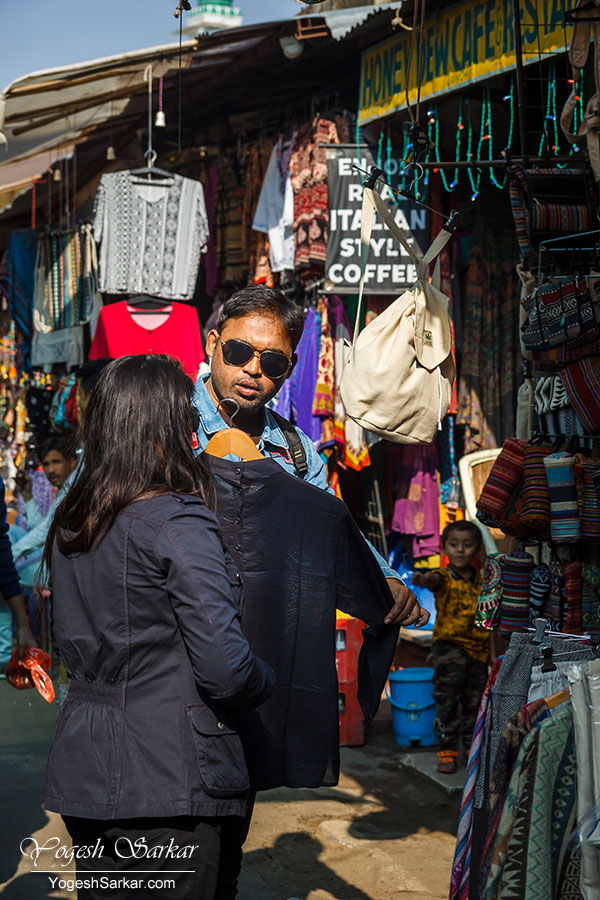 Until we came across a mehndi artist and Neha decided to get mehndi design on her hands. 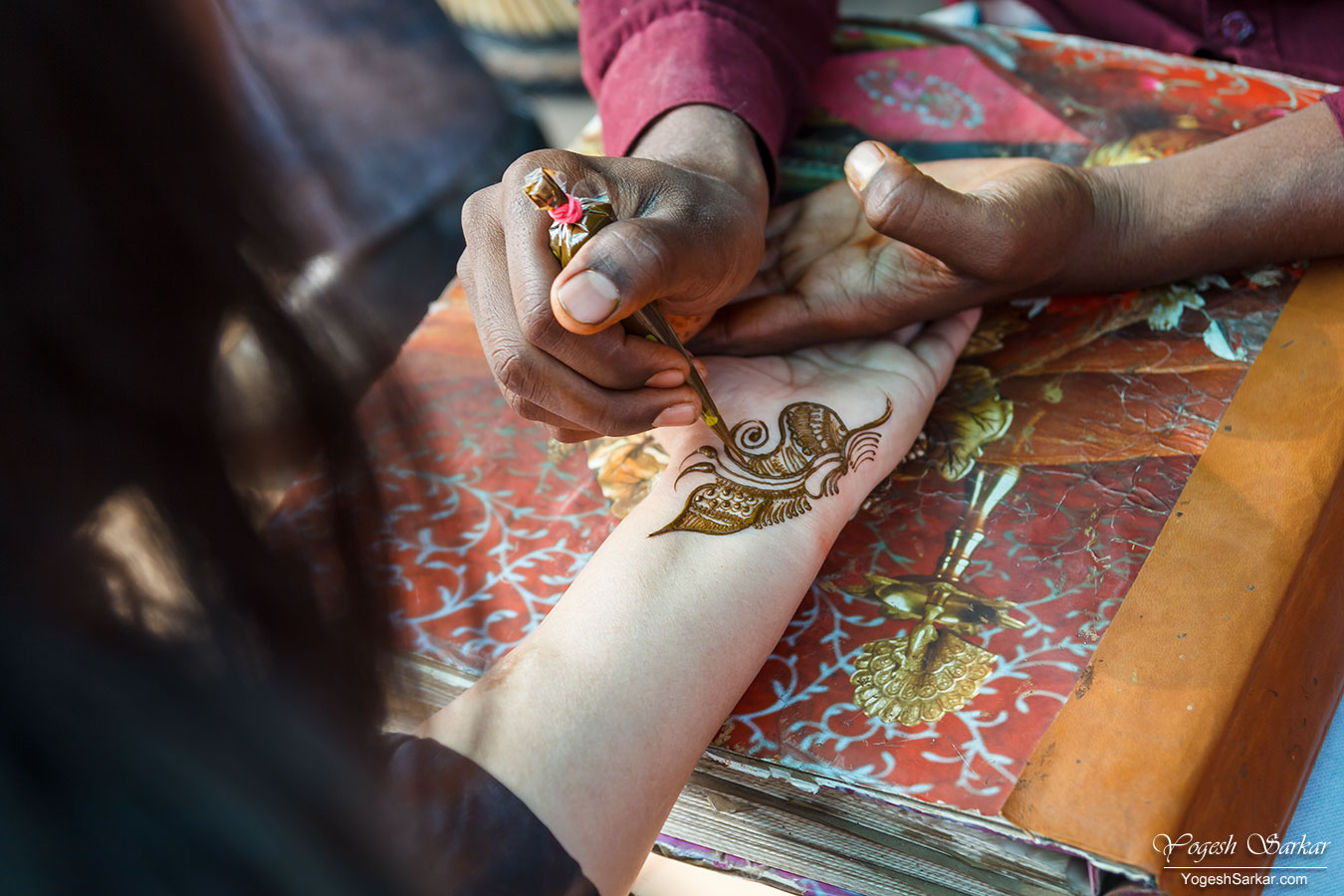 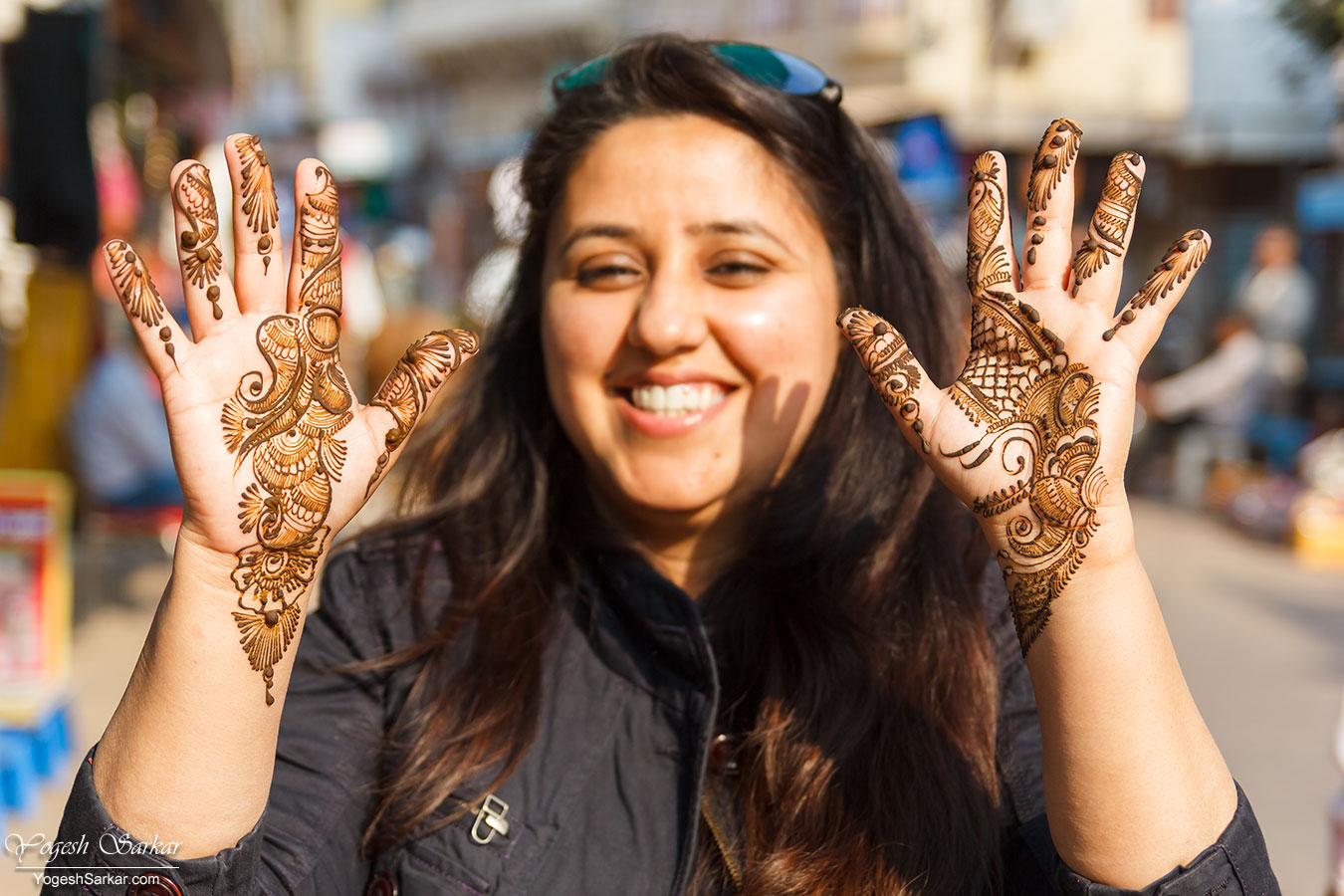 Now that Neha’s hands were full of mehndi, it was time to eat and we decided to head back to Café Lake View for lunch.

The Pesto Pasta I ordered there was just about good, though the taste of olive oil and basil wasn’t as good as I like it to be. 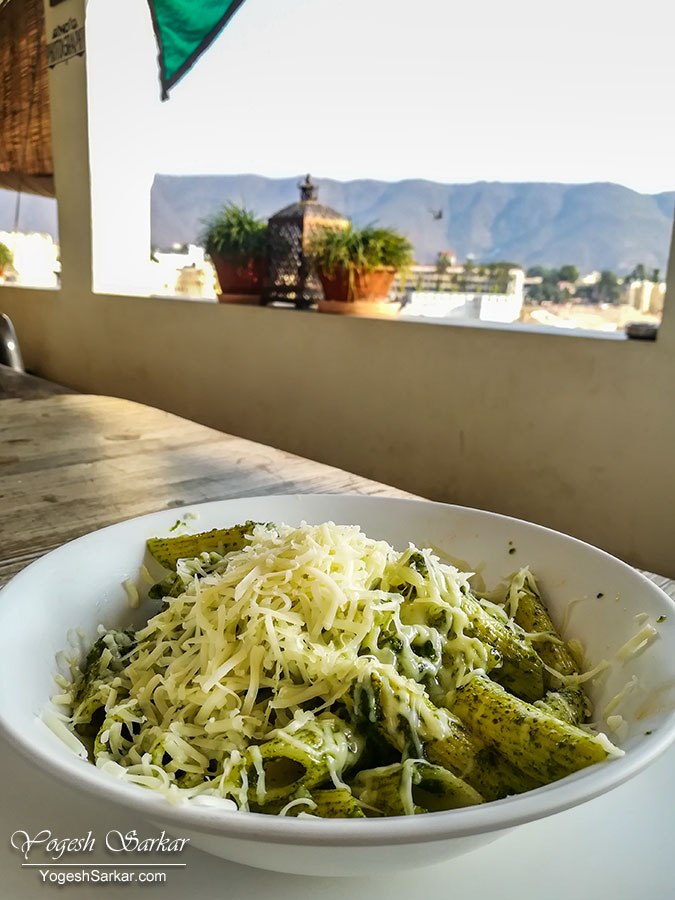 The banoffee pie, on the other hand, was not only available, but it was delicious as well! 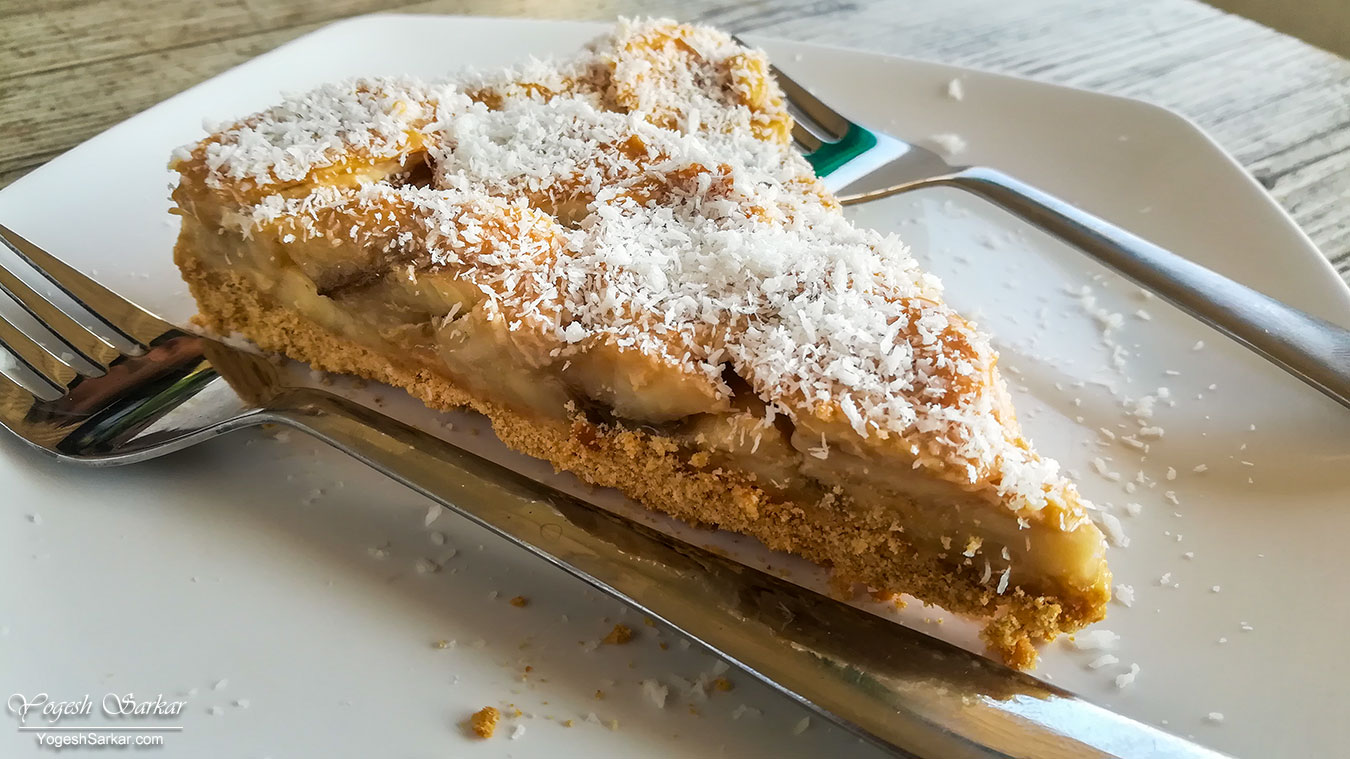 After lunch, we spent an hour or more at the café, lazing around. Before heading out to the market for the second round of shopping. While Neha and Narayan bought a lot of clothes and a Jaipuri razai. I bought a couple of dupattas for my sister, a single Jaipuri reshmi razai for Rs. 550 and incense sticks.

After this, we headed back to our hotel. En route we enquired at a couple of restaurants about the Christmas Party in the evening and decided to come back to IL Padrino an hour later since it was around 6:30 and the party was supposed to start around 8 pm.

Once back at the hotel, I got busy packing, since I had to make room for the things I had bought and we were planning to start early in the morning from Pushkar.

And while I was doing that, RTDC staff came in with the plumber, to fix the toilet jet, which wasn’t working. They hadn’t gotten it fixed during the day, even though I had left the key with them and decided to fix it now.

Meanwhile, Narayan had decided to take a nap, so Neha came over and we talked for a while before we got a call from Narayan and we went back to their room and started a little party of our own, before heading to the party at IL Padrino.

In fact, it wasn’t until 10 that we actually went to IL Padrino and by then, the party was over! There was supposed to be gypsy belly dance and music, but even though light music was still playing, dance etc. was over.

This was extremely disappointing, though true to the words, Shanu (the guy who talked us into visiting IL Padrino) had everything available at the restaurant, even liquor. Though Romanov vodka at Rs. 200 for 30 ml shot seemed expensive, while Old Monk at Rs. 100 for 30 ml seemed somewhat right and Black Dog at Rs. 100 for 30 ml, seemed awfully suspicious.

The Pizza we ordered at IL Padrino was quite good, though the cold was getting to us and eventually Narayan started feeling sick, so we headed back to our hotel and eventually went back to sleep quite late in the night.

You all enjoyed a lot, right?
Nice to see you all like this, it reminds me my trip!

Thank you @razashaikh. Yes, we enjoyed a lot during this trip

Banoffee Pie from Café Lake View is one of the yummiest memory I have from our trip in Nov 2016. Hope you remember? I liked it so much that I tried it once I was home. I love Rajasthan for its colours and Pushkar for its food.

Mansi mishra said:
Banoffee Pie from Café Lake View is one of the yummiest memory I have from our trip in Nov 2016. Hope you remember? I liked it so much that I tried it once I was home. I love Rajasthan for its colours and Pushkar for its food.
Click to expand...

Yes, but Jaisalmer managed to beat Pushkar in terms of food this year

SJM1214 said:
Forgive my ignorance.. but help me to understand what's special in Pushkar...I been there once when we were at Ajmer for a sports tournament during collage ...there is Brahma temple...a lake and foreigners come to Pushkar for pot.. that's it.. infact that what I find from my 4 hour trip...please help me....I am eager to change my mindset about pushakr and visit it once again...but for what??
Click to expand...

Pushkar has it own beauty. It got lots of café to chill and relax. Food served there is amazing. Its heaven for vegetarians.
Nights in Pushkar are quite and lazy. If you like to your own company or handful of people whom you love to spend your time without disturbance, its the easiest get away for you. Try it out again.

Yogesh Sarkar said:
Yes, but Jaisalmer managed to beat Pushkar in terms of food this year
Click to expand...

Spare me.. Do Not remind me about Jaisalmer.