Churdhar ; Lesser but not the least

It was nightfall, the last twilight disappeared behind the horizon, it’s was going to be pitch dark; I was above the tree line but not at the top where I intended to go. Chilling winds were biting cold at this altitude where I was standing all alone without a torch & without a direction. I had almost covered 20 kms since I started in the noon and didn’t encountered a single soul on the trek but spotted many pug marks of Himalayan bear. Then I realize I’m into some deep shit. 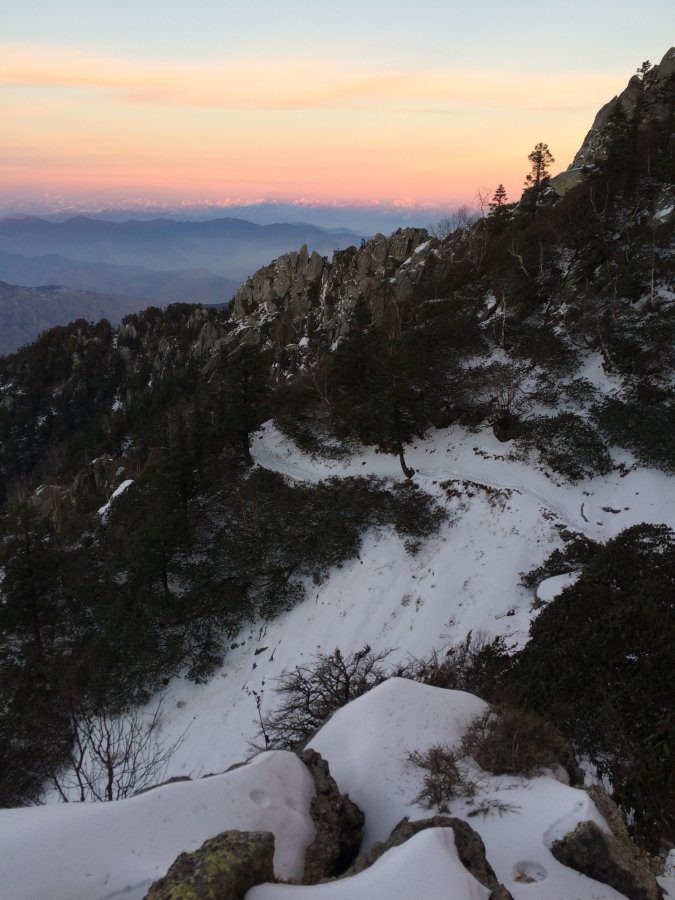 The series of follies is as follows:

Folly no 1: Going solo in off season

As always the programme was spontaneous. The destination was on my mind since last year failed attempt when we had to return from ‘Teesri ‘ due to excessive snow on the route even in March end. Last year during our failed attempt, we were four with a local lad to show us the way, this time I was on my own with a light backpack. Some pics from the last year failed trip to Churdhar: 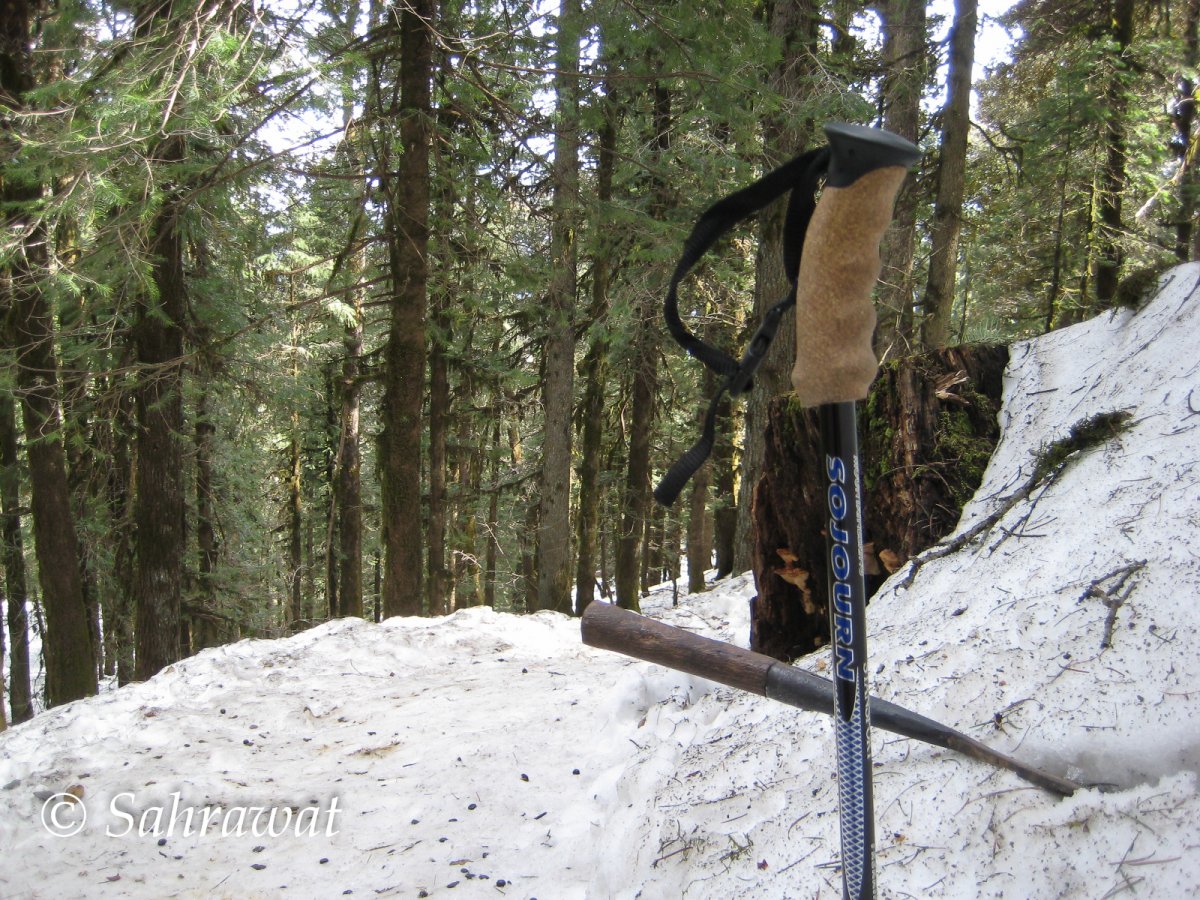 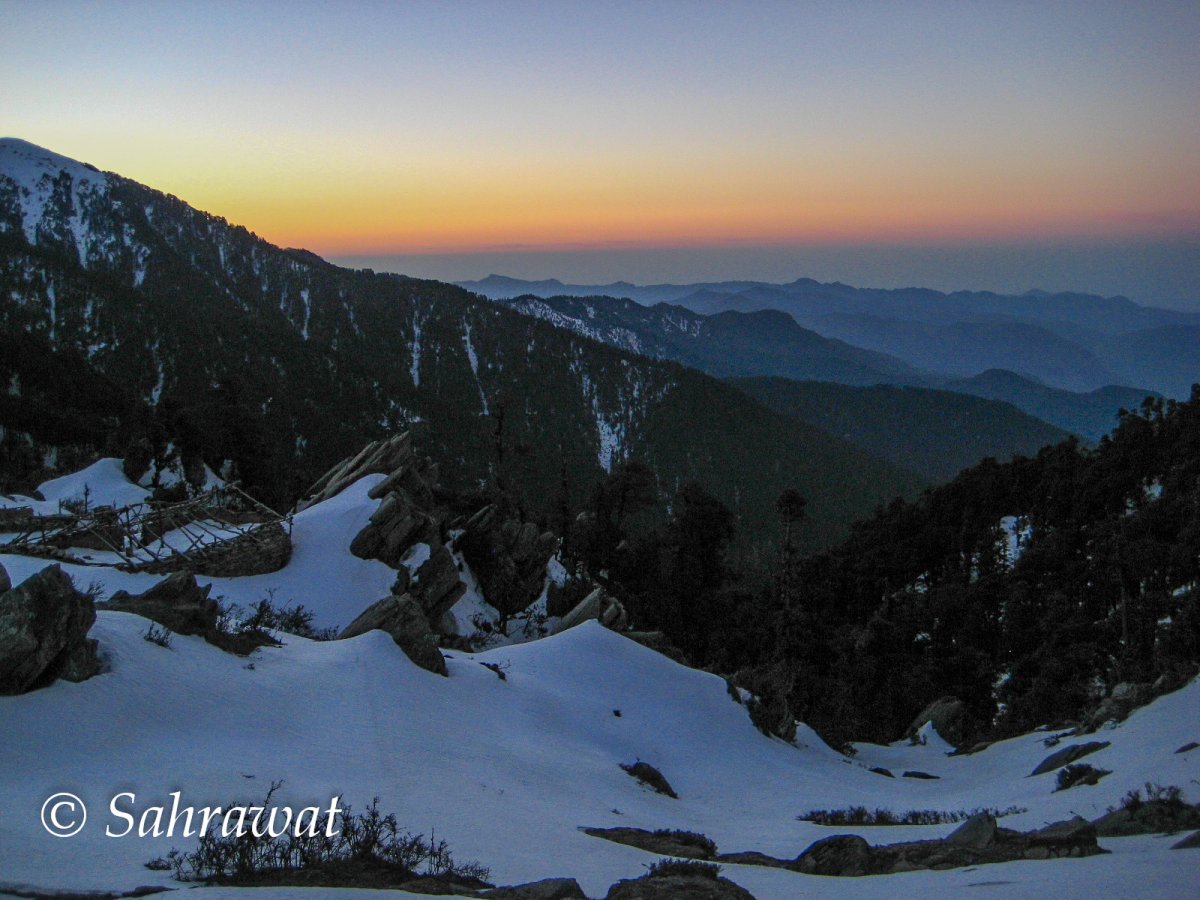 These are from the previous year trip 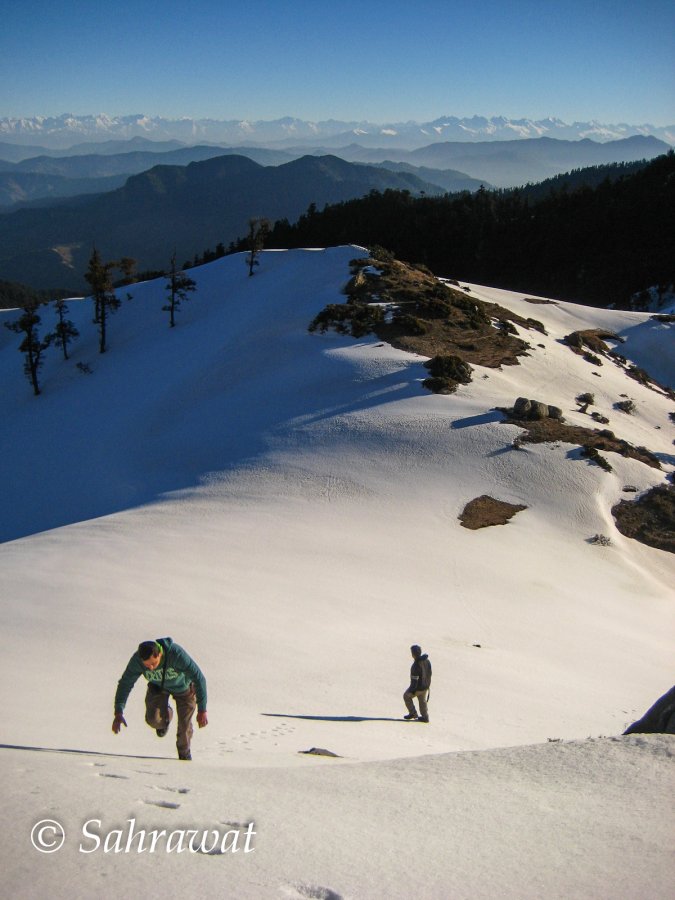 The way to Churdhar was under deep snow 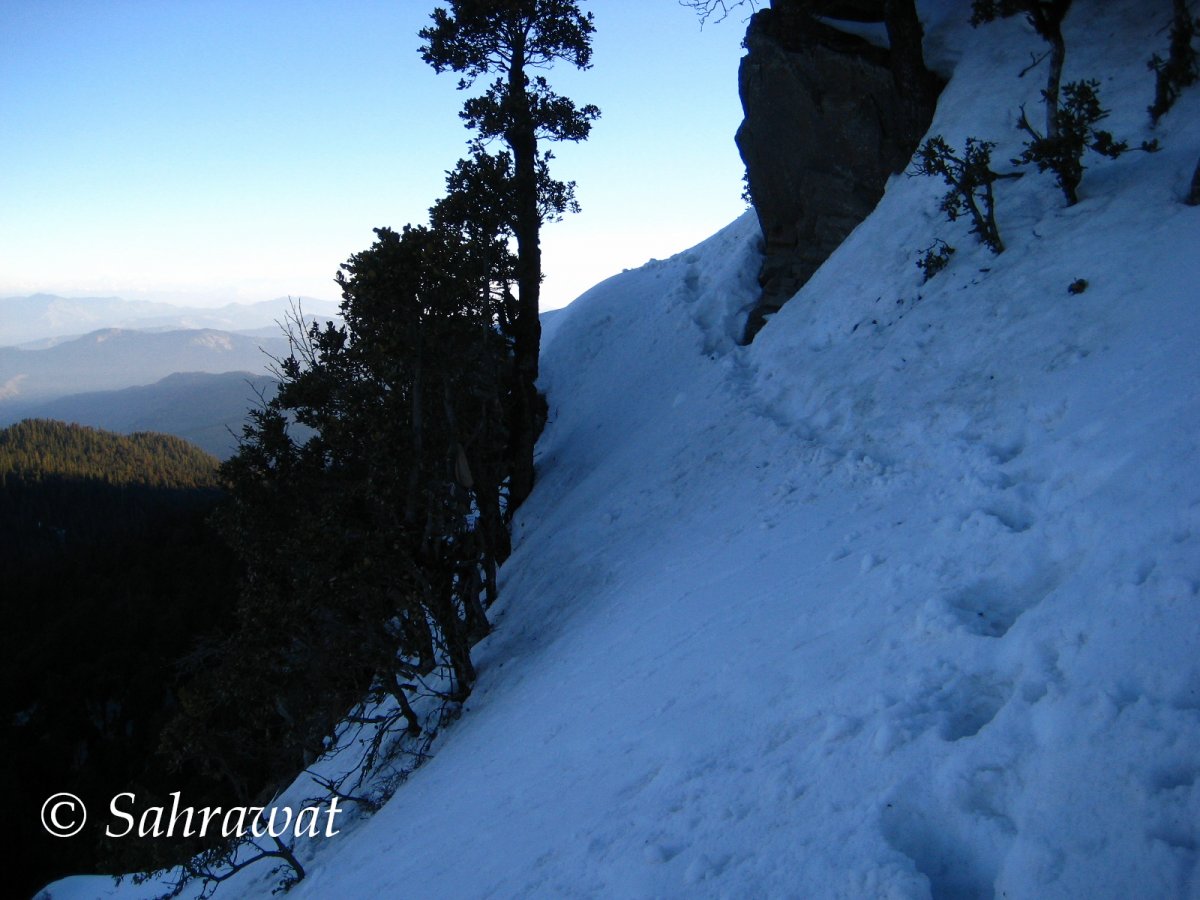 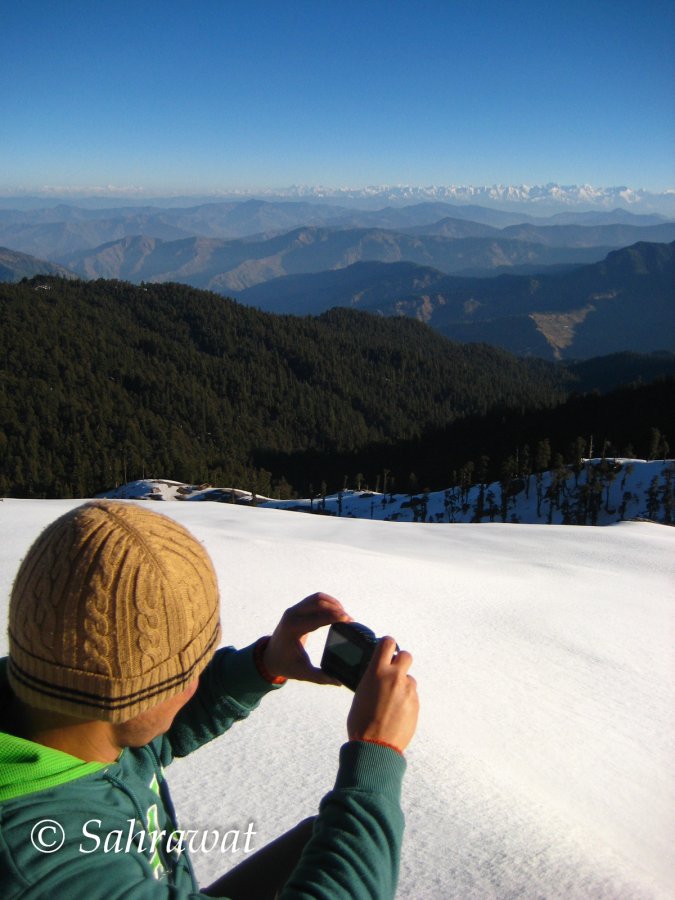 This year when things starting to turn into favour of a trek I inquired my trek buddies if they are interested. They just cursed me for calling them at the eleventh hour and hang the phone in denial. So I was left with myself to accompany me.

Started from Panchkula on a borrowed bike, reached Nauradhar at 1130 hrs, consulted locals about the route conditions and started for the trek without wasting any time.

Local’s Feedback: This is not a time to go to up there, pilgrim season is over, Dhaba’s are closed, and there are very few people only at the temple complex who’ll also come back in a day or two.

Folly no 2: Not hiring the guide.

Since I knew the route till Teesri, I was confident to make it without any help for the directions. Secondly, I assumed that I would find some locals en-route so company should not be problem. For the initial half an hr, it wasn’t a lonely trek, I could see some people working in the fields from a distance. 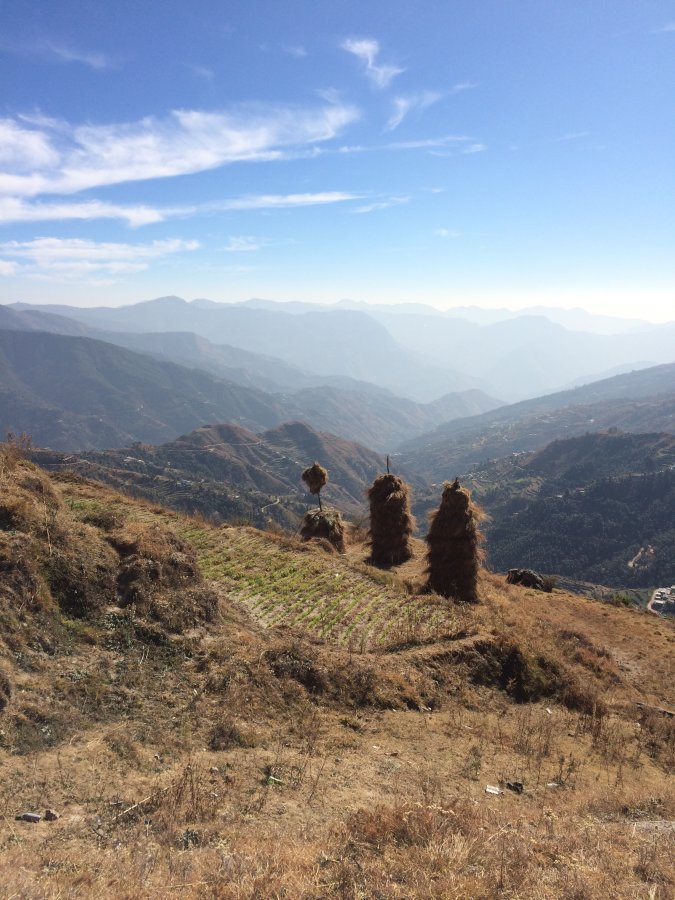 It was a sunny day with a cool breeze and I was enjoying the scenery. Soon the trail entered into thick forest of rhododendron, birch and deodars. The only noise one hears was of wind cutting through the foliage or the occasional chirping of birds. With an easy pace reached Jamnala at 1330 hrs. I was anticipating finding few people at this point but it was totally deserted, not a soul in sight, could only find remains of makeshift shacks used to run dhabas by the locals in the season. So it was time for some contingency planning, I calculated the odds of making it to the top before sunset. 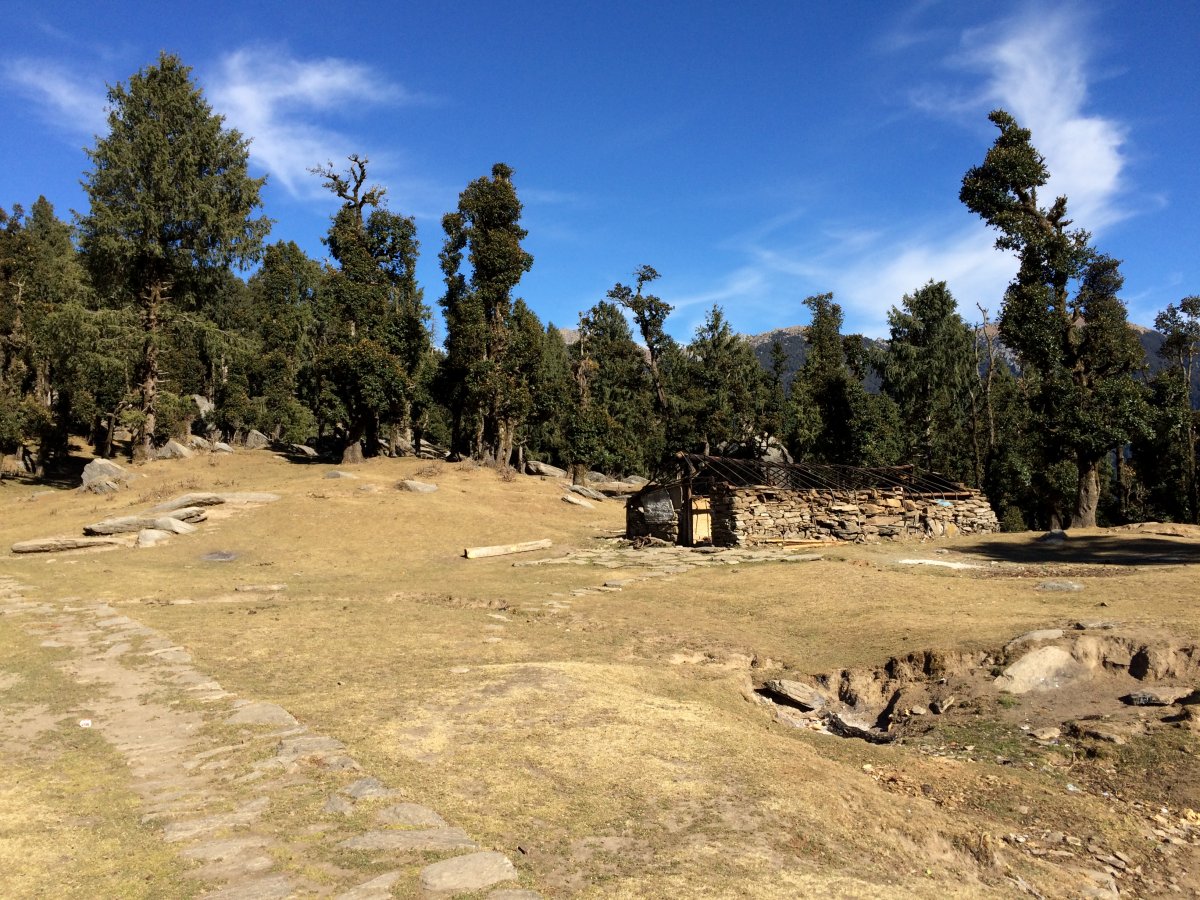 The last light would be available till 1730 hrs. That means covering the remaining distance in 4 hrs (before 1730) without losing the trail. It is pretty easy for a local but relatively difficult for person from the plains. It gave me two options:


1: Reach Teesri in daylight, halt for the night and start early next day.

2: Take a chance and try to reach temple complex before it get dark.

In, any of the case, had to reach Teesri first, but the next challenge is to find a shelter as I wasn’t carrying a tent with me. So without wasting much time at Jamnala , started for Teesri.

After Jamnala the gradient is gentle but the jungle become more & more dense. Now my mind started playing games with (What if!) type of thoughts.

Captivated by worrisome mind, i kept walking without taking much breaks and reached #Teesri @ 1525 hrs. (well in time) as per the plan.

Wow! What a great adventure. Excellent narration, reminding the twilight saga....... no guide, no tent........great confidence. Teaser is excellent.......


Leopard cleared your way to pass through the jungle ?

@Suresh Babu @rahi @Black Pearl vkd @adsatinder : Thanks for bearing with me for so long, here comes the next part.

@Sahrawat
Some friends are planning to go next week to Churdhar.
How is weather there now ?
How many hours it will take to reach there from Delhi to Nauradhar / Rajgarh ?
Which route is better ?
Delhi Shimla or Delhi Nahan - Nauradhar /Rajgarh ?
Last edited: May 16, 2016

At Teesri , there is concrete structure where night can be spend, there was some dry wood as well to make fire. But where are the matchsticks! WTF ! how could i miss to bring them. Without fire its hard to spend the night at Teesri . The place is infamous for the gusty cold winds and even more for temperamental Himalayan bears. 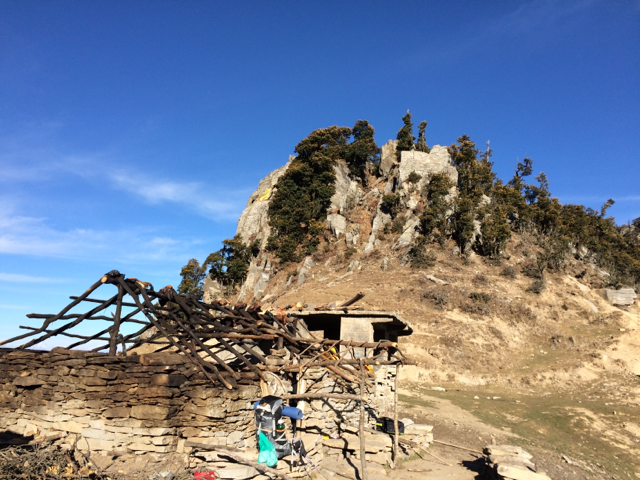 I Recall, Last year we had to spend a night at same place and remember our guide didn’t had a nap entire night and was sitting guard by the fire outside of our tent. He didn’t joined us even we had enough room to accommodate him. We had also spotted some pugmarks next day in the vicinity. May be the threat of wildlife is real and eminent.

This time i didn’t even had a matchbox ...so there was no point in staying at Teesri..i had to move on.

From Teesri ....there are two ways which lead to the temple complex. I wasn’t sure which one to take. The left one offered magnificent views of greater Himalayas so took the north one. The north side was covered with snow as it receives less sun during the day. Trail got narrower and snow-covered as i proceed. The ridge was on my right, and the open slope on my left. The trail was going down steeply and rising up again. My sport shoes were losing traction every now & then, and every step counted as it was getting tough by then. It wasn’t fresh snow but hardened snow. Trekking pole saved the grace many a time. I had to stop after every 30-40 steps to regain the lost strength. I was losing the precious daylight every time i stopped to catch my breath.

After walking for an hour i was wondering if this is the right trail. I was constantly descending into the tree line where as i had to reach at the top. After losing altitude for some 200mtrs the trail started ascending again. Nevertheless, i had no option to go back to Teesri as i had come too far and left no energy to go back. So kept on moving forward, hoping for the best. The steep ridge was on my right and the tree line was on my left. Crossed Spur after spur but didn’t get any sight of the temple. Occasionally, got a sight of Shiva Idol on the top which seemed too far away, too high. At one point i thought to abandon the trail and climb to the top but considering the gradient, snow condition and shortage of time, i stuck to the trail. 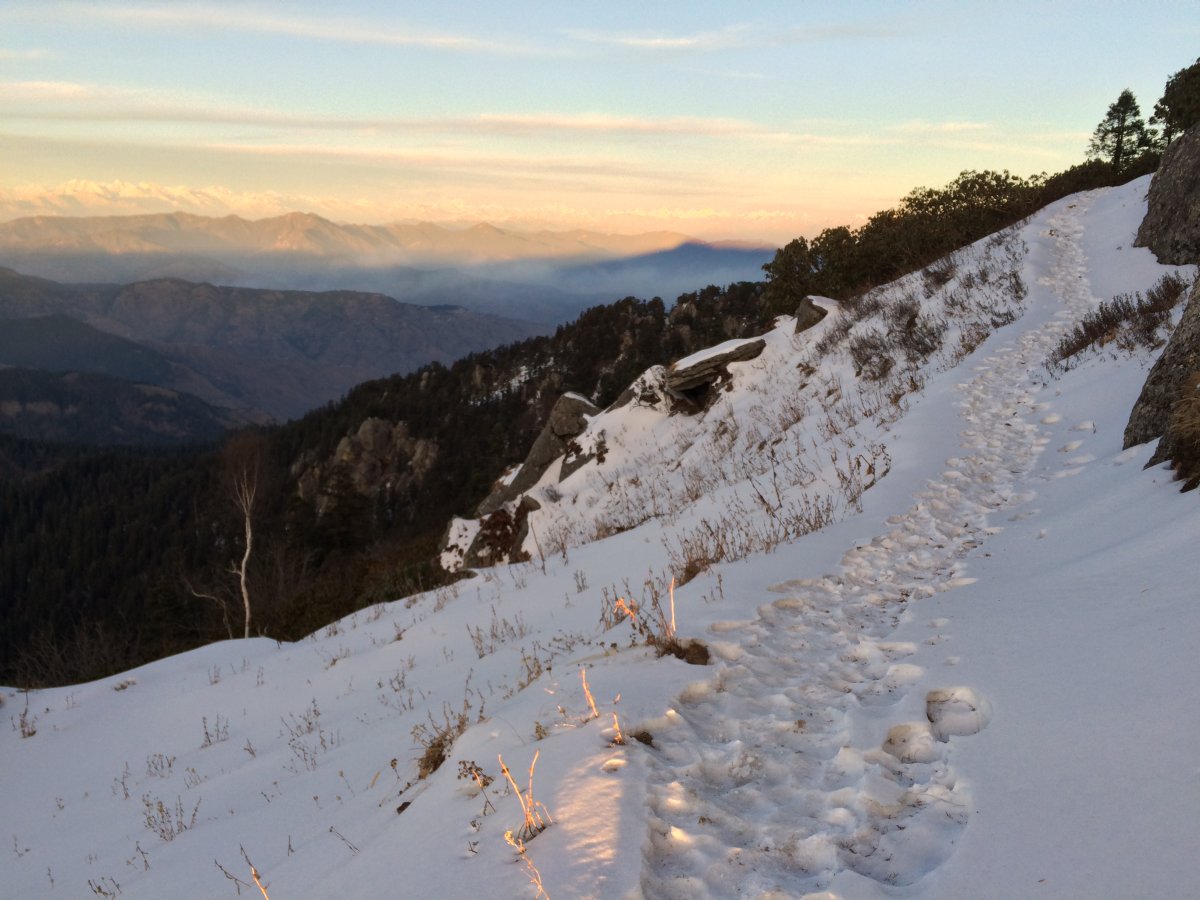 To make the matter worse i observed several caves under the big boulders and foot marks as well which were definitely not of a human.

It was time to reconsider my contingency plan;


Soon the horizon turned orange, and i witnessed the phenomena of a life time, to my north there were greater Himalayas illuminated by the twilight, in between the lesser Himalayas forming a wave like effect, in foreground, it was pure white snow to make it magical. It was 1715 hrs, soon the ambient light started to fade away and i was still standing spellbound, mesmerised with the view. Neither my phone camera not do i were capable to capture that beauty in its true form. The light faded completely in few minutes arising fears and apprehensions in my worrisome mind. Within minutes the sky turned from cyan to rich blue.

Details were no longer visible; the forest and boulders seemed like a patch of grey, the sky was turning from rich blue to black, only thing that stood out was snow which made my path slightly visible. Only moonlight could have helped me, but it was also too little, too late. I pulled out the reserve torch from my backpack and to my disappointment it had drained out batteries. There was no point in cursing oneself so i forgave myself and moved ahead. There was no sign of the temple or the way to the Shiva idol. After trundling for half an hour, i reached ‘Y’ fork where one ways go upwards and the other goes downwards. Optimism hit me back and i thought the uphill trail will either take me to the Shiva idol or the temple and the other one to Sarahan. I opted to go uphill which was my biggest folly of the trip.

The snow and the gradient, both were increasing as i went up. The trail wasn’t visible anymore, only the footmarks in the snow gave in idea about the direction. But there were footmarks other than human which were misleading me time and again. These footmark were bigger than a human feet , and were in pairs going to the caves formed by big boulders . As i moved further, it becomes steeper and i had to use my all fours to move up. The temp was dropping, the freezing high speed winds sent a chill down my spine, my shoes were wet, and the visibility was poor due to low light. But all these factor could have been neglected and overcome. The real fear was of encountering a wild animal as by this time i was certain of their presence in the vicinity.

Soon i spotted the Trident & flag on the top of the peak some 200 meters above me, which means i can at least find a shelter in the cave underneath it for the night. A fellow bcmtian Sidharth has told his tale how he and his friends spend the 11 hrs in a cave beneath Shiva Idol when they lose their way.

One should always thank god for the current circumstance as thing could have been worse than you ever imagine.
Last edited: May 16, 2016