Churdhar ; Lesser but not the least

Think of devil and devil is there:

A 15 minute scramble would have taken me to my destination for the day but god had planned something better for me. As i was struggling to climb a narrow passage between the two boulders i heard some noises. My paranoid mind hinted me to run back for safety. But, there is no way back. So i decided to give a try to find out what it is, as i had almost reached my destination and i didn’t have the other option. So i moved forward cautiously, taking few steps at a time, to ascertain if my apprehensions are real. No surprise, i spotted two black figures some 20 yards away on my way to Shiva idol. One was rubbing his back with a boulder, and other standing nearby. I couldn’t make what that animal was, by looking at his size it could have been bear . The details were not clear but one thing i was sure was that i need to run for my life. But you can’t run at that gradient, one can’t even walk without using hands. Loosing balance at that place means coming tumbling down several feet before you are stopped by a bush or boulder. I stopped after coming down some 50 steps. Then i looked back and found no one was following me. Ahhh....took a sigh of relief...but now what! Where to go! Is there any alternate route to the peak! Even if there is an alternative route, it won’t be visible, there is no guarantee that i won’t find the wild animals near the Shiva idol again. So decided to descend to the point where i find this diversion. In half an hour, i was back to point where i started the uphill trek.

Now i had three choices :

· Stay put where i was and wait for morning.

Challange : There was no shelter, its hard to survive those bone penetrating winds.

· Go back to Teesri using the same route i came

Challange : I spotted some caves & pugmarks in this route as well, hiking during night has risk of encountering wild animals again.

Solution: This seemed to be a only available option to me and i headed forward on the route , come what may.


The Trail is like a parikarma of churdhar from Teesri, you can start from it and end at it encircling the mountain. I was on the North east spur of the mountain, and you can’t see what lies ahead until you cross this spur. As soon as started on the trail i spotted a water pipe partially buried in the ground , it gave me a ray of hope and if followed the pipe which took me to a water tank. There i spotted the Temple complex. I was overjoyed, couldn’t thank god enough for being so kind to me. I rushed to the temple with brisk steps where i find Swami ji with few followers offering evening prayers to Shrigul Maharaj.

Post pooja rituals i stated the incident to Pandit ji, he offered me a room in the temple complex and asked his sewadaar to arrange for dinner and blankets. I got an opportunity to have dinner with Swami ji who told me that he stays at the temple throughout the winters. His Sewadaar and the few other people will go back to their villages soon and he’ll stay alone at the temple complex during the winters. He has got enough fire wood and ration to pass the winter. The winters are so harsh at the top that entire temple is submerged in snow. At times he has to shovel the snow from the roshandaan to get some fresh air.

Swami ji confirmed the presence of wild animal around the temple area and in the region above. He said, it’s safe when there is pilgrim season but once its Ekaant (Solitude), wild animal roams free as no human presence is observed. When i talked about my incident, he said it must have been a Bhaghera , (Black Panther) as it was also spotted by a local villager who was coming from the Sarahan side. As per him the Bhaghera is shy animal and don’t attack humans, but black bears when startled, chase humans and inflict serious injuries which can be fatal, though they are considered vegetarian.

Samtal is a relative term...the gain in altitude is from 2100 mts to 3900 mts , nothing is samtal literally.

Thakaan to hogi no matter how fit one is , locals are exception.

Never underestimate Churdhar...that's why i said "Lesser but not the Least"


Very Good !
Actually, there is not much written about height etc and what is there.
Now I am seeing good number of people going there and the place is best in my opinion !

@ rahi ; We did not notice any cave on the way to top when we went there in Oct, 15, may be we fixated our eyes on Shiva Idol. Do you mind sharing pictures (if any) of that cave or area around??[/QUOTE]

Its not a cave exactly but kind of a small platform on to which idol is situated. It has room to accommodate 2-3 person in sitting position.
R

Sahrawat said:
Its not a cave exactly but kind of a small platform on to which idol is situated. It has room to accommodate 2-3 person in sitting position.
Click to expand...

But the pujari told us earlier there used be a never ending deep hole through the rock (way to narak or paataal/netherworld probably) and pilgrims used to offer money (coins etc.). Later, it was filled.
R

Sahrawat said:
Go ahead on the trail which i thought to be of Sarahan ( this is different from Sarahan on NH22)
Click to expand...

Yes. This is alternate route to visit churdhar peak via choupal - sarain which is short (around 7-8 Kms from Sarain (may be wrong) and relatively easy)

The path I followed , these are not GPS coordinates , just for indication :

The other approach to Churdhar are from Sahran from the North East ridge & Tranha from the East side Valley. 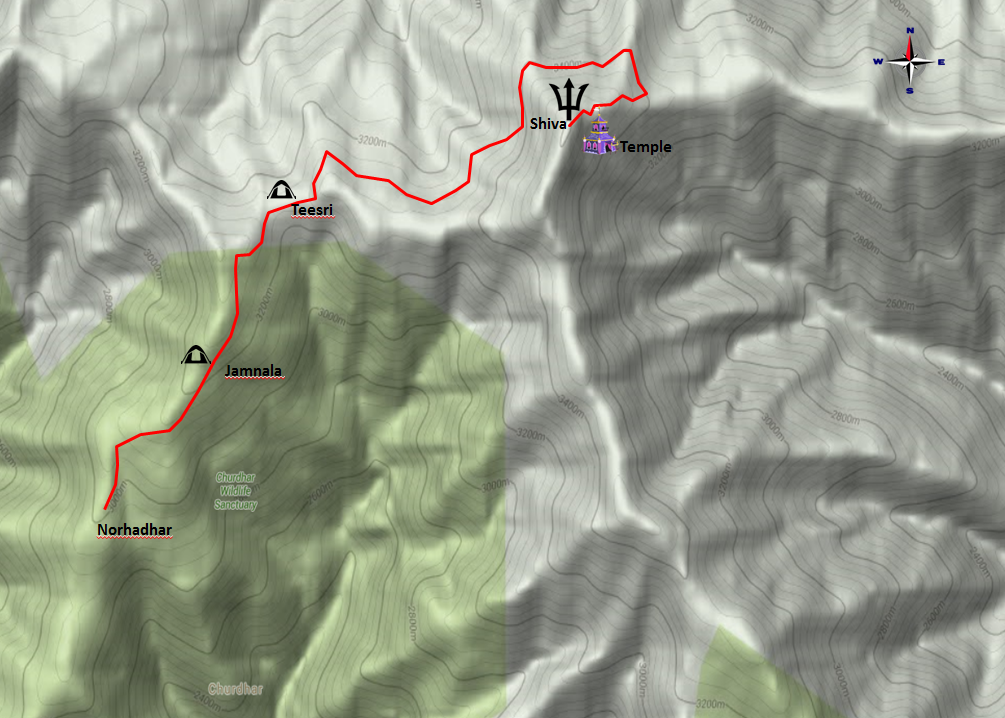 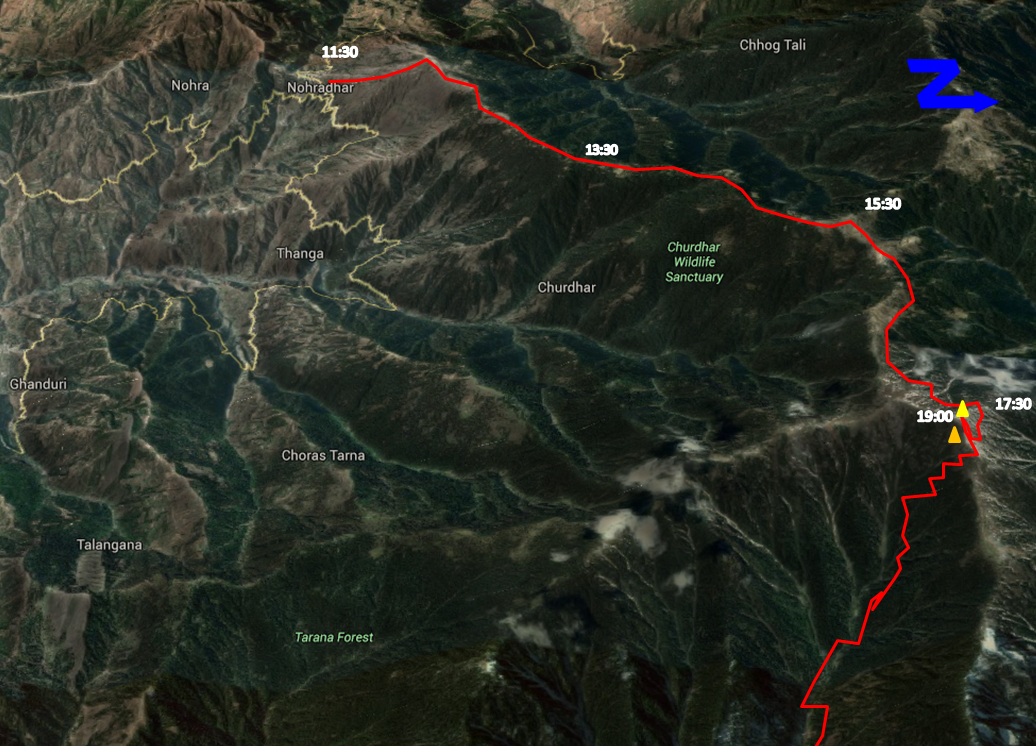 From trahan, its easy to go there, as snowline starts after trahan, which is already at high altitude. From trahan its gradual ascent and one can come back by sliding on the frozen water body just back of the temple [though a risky affair].
R

Satinder Bhaaji, here are the details.

Here are the pictures of the hotel at Nohra. 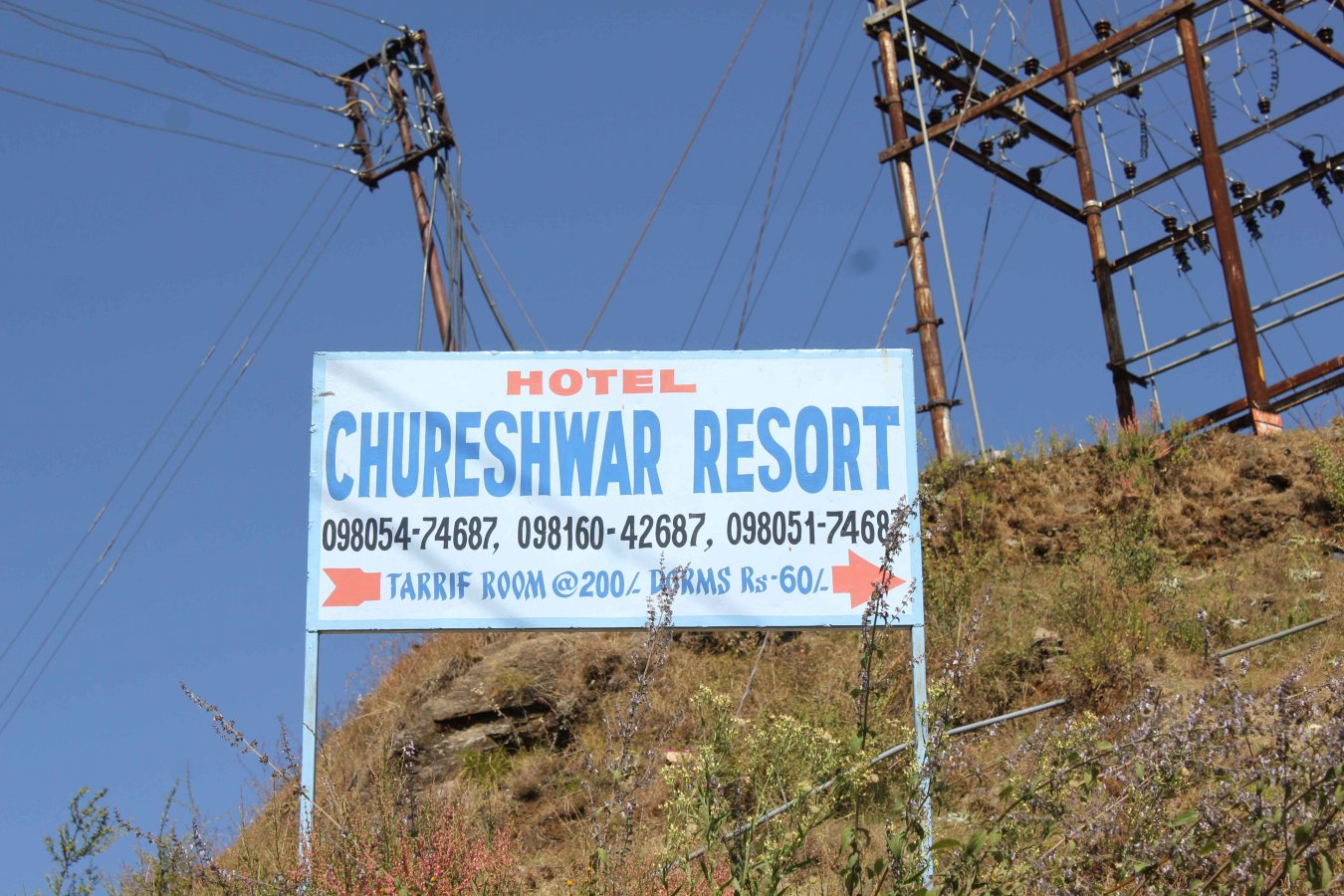 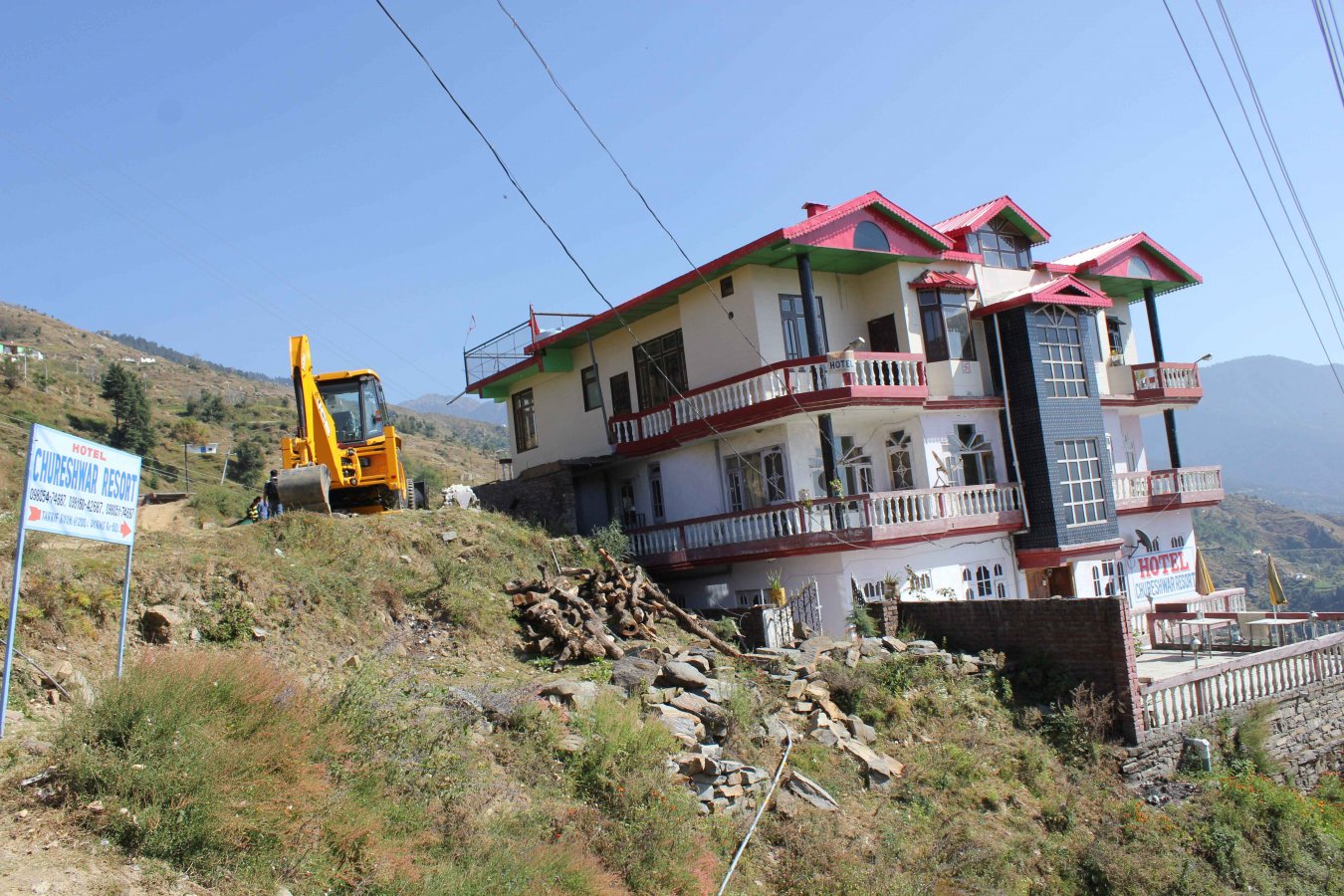