The Centre on Thursday asked states to ensure strict implementation of lockdown and night curfew protocols, saying it has noticed violation of the restrictions at several places. 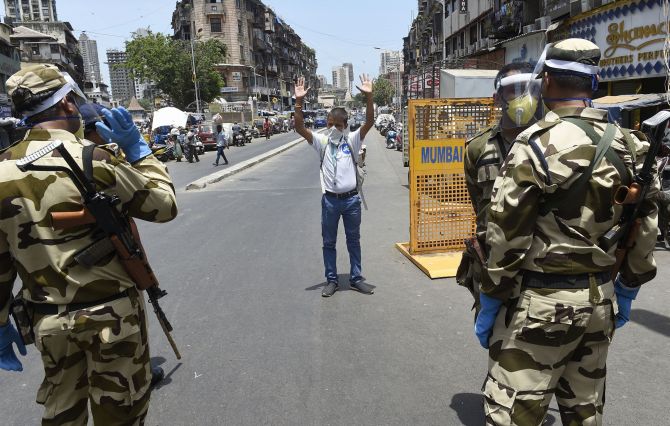 
In a communication to all states and union territories, Home Secretary Ajay Bhalla asked them to strictly ensure prohibition of all non-essential activities between 7 pm and 7 am, saying the night curfew imposed to contain the coronavirus spread is an 'important element of the home ministry guidelines'.
He said the night curfew has been imposed to ensure that people observe social distance.
"Accordingly, local authorities should be asked to issue orders in the entirety of their jurisdiction, under proper provisions of law, for imposition of night curfew. Strict compliance of these orders should be ensured by the local authorities," he said.
Bhalla said the Home Ministry has noticed reports of violation of its guidelines at several places.
"I would like to emphasise that the MHA guidelines should be strictly implemented, and all authorities in states and UTs should take necessary steps to ensure the same," he said.

These stipulations, such as wearing face covers, ensuring social distancing at work, transport and in public places, maintaining hygiene and sanitation etc., are important for containing the spread of COVID-19.
"It is the duty of all district and local authorities to enforce the national directives," he said.
"I would request all the chief secretaries of states and administrators of union territories to remain vigilant in the fight against COVID-19 and ensure that all measures that have either been mandated by MHA or laid down by the States and UTs, are scrupulously adhered to at all levels," Bhalla said.
After the lockdown was extended till May 31, the Home Ministry issued fresh guidelines relaxing some curbs that were imposed during the first three phases, except in the containment zones.
Bhalla said a proper delineation of containment zones and effective implementation of containment measures is key to preventing the further spread of COVID- 19.
In this respect, the guidelines issued by the Ministry of Health & Family Welfare need to be followed and containment zones properly demarcated.
'States and UTs can now delineate various zones, and decide on the activities to be prohibited, or allowed with restrictions, in accordance with the MHA guidelines.
'Further, once the guidelines have been issued by the states and UTs, they should be strictly implemented, and action taken if any deviations are noticed,' the home secretary said in the letter.
The lockdown was first announced by Prime Minister Narendra Modi on March 24 for 21 days.
It was then extended till May 3 and again till May 17.
The lockdown has now been extended till May 31.
The death toll due to COVID-19 rose to 3,435 and the number of cases climbed to 1,12,359 in the country till Thursday 8 am, according to the Union health ministry. 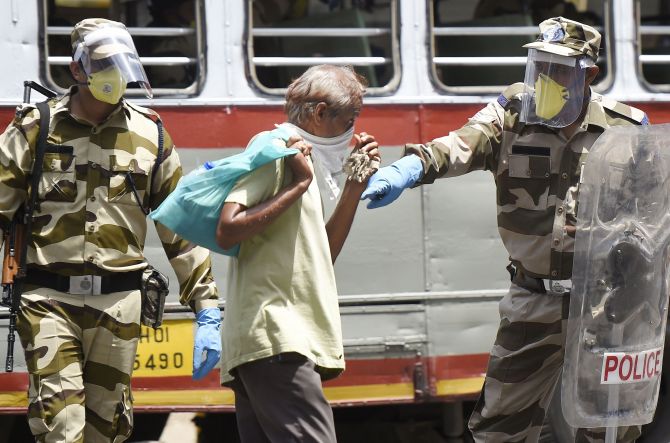 
Central Armed Police Force (CAPF) personnel were deployed in Dharavi and some other areas of Mumbai on Thursday to help the city police enforce lockdown to contain coronavirus, an official said.
A company of the Central Reserve Police Force (CRPF) was deployed at Dharavi along with local police, the police official said.
Earlier, on Wednesday night, personnel of the Central Industrial Security Force conducted a flag march in Bhendi Bazaar in south Mumbai to enforce a strict lockdown.
On Thursday, CRPF personnel met police officers in Dharavi, a COVID-19 hotspot, and discussed deployment plan for the area, the official said.
Five companies of CAPF, including personnel of CISF, arrived in Mumbai on Monday, he said.
Armed with weapons, batons and shields, CISF personnel conducted a flag march in Bhendi Bazaar on Wednesday night, he said.
The Maharashtra government had said that it had sought central forces so that the overstretched police force could get some rest.
More than 700 Mumbai Police personnel have contracted coronavirus so far and ten of them have died.

The central forces will assist the Mumbai Police in maintaining law and order and in prevention of any untoward incident during lockdown.
Personnel of the Central forces have been deployed in zones 1,3,5,6 and 9 of the city covering some areas of south and central Mumbai and parts of eastern and western suburbs, the police official said.

No Aarogya Setu? Fliers can give self-declaration

Following are the norms announced by the ministry of civil aviation for domestic passenger services: 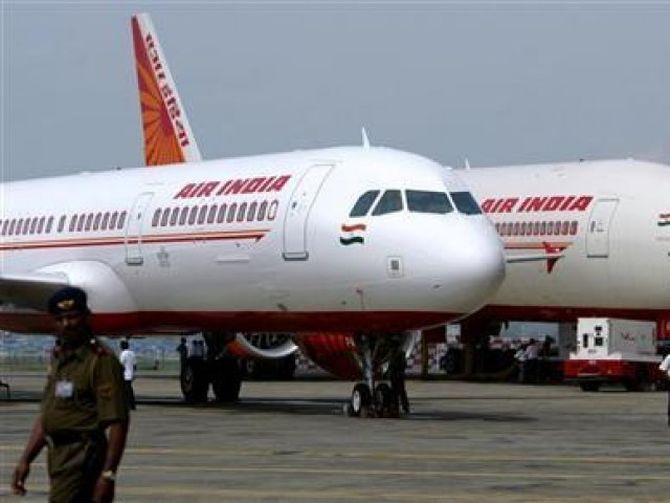 Flight dos and don'ts issued, air fares set in 7 bands
The ministry of civil aviation said on Thursday that about a third of operations will be allowed under strict norms when domestic flight services restart on Monday after a two-month hiatus due to the coronavirus pandemic, and all the airlines will have to adhere to the upper and lower limits of fares prescribed by the government.

No Aarogya Setu? Fliers can give self-declaration

Domestic passenger flights to resume in phased manner from May 25
Source: PTI - Edited By: Nandita Malik
Last updated on: May 20, 2020 19:49 IST

All airports and air carriers are being informed to be ready for operations from May 25. SOPs for passenger movement are also being separately issued by the ministry of civil aviation. 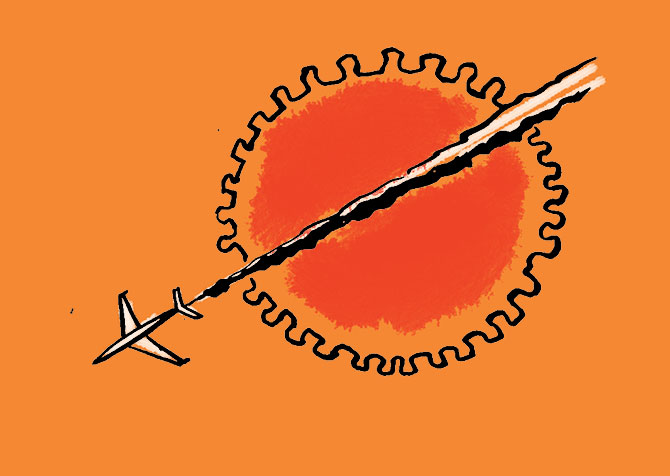 Domestic passenger flight services will resume from May 25 in a calibrated manner, Civil Aviation Minister Hardeep Singh Puri said on Wednesday.
The minister, however, did not say as to when international passenger flights would resume.

All scheduled commercial passenger flights have been suspended in India since March 25, when the Modi government imposed lockdown to curb the spread of the novel coronavirus.

"Domestic civil aviation operations will recommence in a calibrated manner from Monday, May 25, 2020. All airports and air carriers are being informed to be ready for operations from 25th May," Puri said on Twitter.
"SOPs (Standard Operating Procedures) for passenger movement are also being separately issued by the Ministry of Civil Aviation," he added.
Puri had on Tuesday said the Centre alone cannot take a decision on resuming passenger flights and the state governments should be ready to allow these services in the spirit of cooperative federalism.
SpiceJet chairman and managing director Ajay Singh welcomed the decision to resume passenger services,
“We welcome the government's decision to recommence domestic civil aviation operations from May 25.
“This resumption will go a long way in lifting the overall economic sentiment in the country.
“While the SOP for resumption of operations and details of flights to be operated is still awaited, we are sure that this much-awaited move will help a large number of passengers by providing them access to the safest and the quickest means of transport," he said.
The aviation sector has been hit hard by the pandemic as various countries, including India, decided to suspend commercial flights completely to curb the spread of the virus.
Since March 25, Indian airlines have taken steps like firing expat pilots, announcing pay cuts and leave without pay for employees to conserve cash.

The first, second and third phase of lockdown were between March 25-April 14, April 15-May 3 and May 4-May 17, respectively. The fourth phase started from May 18 and would end on May 31.
Cargo flights, medical evacuation flights, offshore helicopter operations and special flights approved by the aviation regulator DGCA have been allowed to operate as usual during the lockdown period.


Domestic passenger flights to resume in phased manner from May 25

The railways will open its reservation counters at select stations for booking of only reserved tickets from May 22, the Railway Board said in an order on Thursday.
https://www.rediff.com/news/report/trains-to-run-from-june-1-online-booking-opens-today/20200521.htm 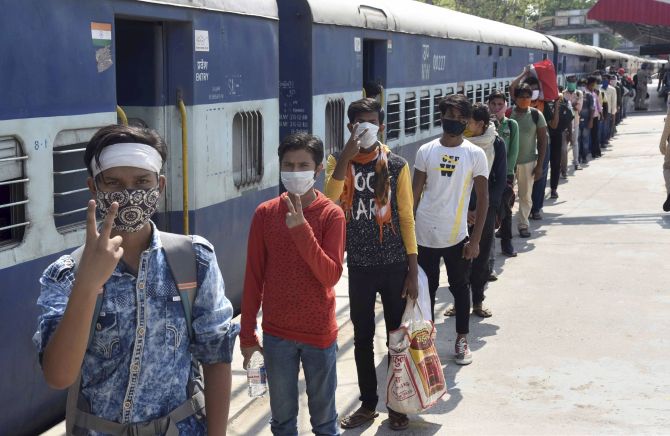 It said it will also allow reservation of reserved tickets from common service centres (CSC) and through ticketing agents with effect from Friday.

The zonal railways have been instructed to decide and notify opening of reservation counters as per local needs and conditions, the order stated.

These booking counters as well as the CSCs were shut since March 25 when a nationwide lockdown to contain the spread of coronavirus began.
Earlier in the day, Railway Minister Piyush Goyal said booking of train tickets will resume at around 1.7 lakh CSCs across the country from Friday, making the service accessible to those in remote locations where the availability of computers and internet is negligible or absent.
"We have to take India towards normalcy," he said.
The railways said the reservation counters will open from Friday in a phased manner along with dissemination of information about their respective locations and timings as per the local needs and conditions.
"It may be noted that running of Shramik Special trains will continue to be handled by local state governments as per the existing protocols.
"The opening of these booking facilities will significantly reduce the burden on passengers, many of whom depend on counter tickets to travel," it said.

The zonal railways may adhere to standard social distancing guidelines and observe the hygiene protocols in view of the ongoing COVID-19 pandemic, the board said in its order.
Currently, passengers can only book tickets for 15 pairs of special trains running on the Rajdhani route and 100 pairs of special trains that are scheduled to begin operations from June 1.
As of now, tickets for these trains can only be booked online through the IRCTC portal. 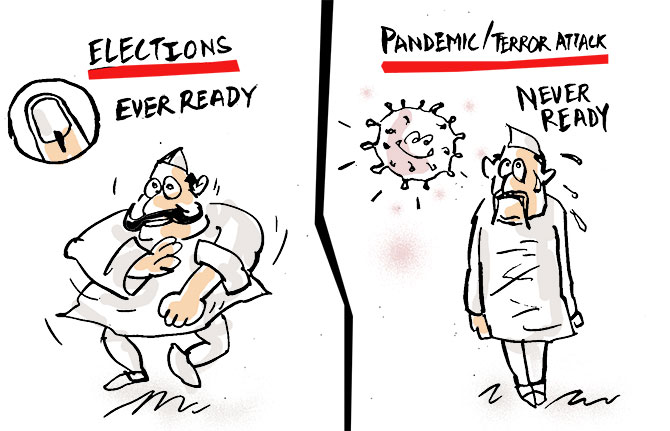 
More than 5 million people are now known to have contracted the coronavirus. New infections are easing in Europe and the US, but experts say a second wave is inevitable. New cases are surging in Latin America. Brazil, which reported the continent's first case back in February, is seeing the most new cases. On Wednesday alone, the country recorded almost 20,000 new infections. If the trend continues, its likely that Brazil could soon have the second-highest number of cases in the world. Turkey's economy was in trouble before the coronavirus outbreak and its economic fallout hit the country. The Turkish lira has tumbled against the dollar and central bank interventions aren't helping much. Some of today's other coronavirus developments: - The Chinese city of Wuhan, the epicenter of the outbreak, has issued a total ban on hunting, breeding and eating wild animals. Research suggests the virus is most likely spread from wild animals to humans through such practices. - A top US scientist has said people should not count on a vaccine being developed soon. William Haseltine says the best approach is to manage the spread of the virus through contact tracing and strict isolation measures amid fresh outbreaks. - Iran's deputy health minister says some TEN THOUSAND health workers have been infected with the virus. - A meat processing plant in the Netherlands has been closed - after some 45 employees tested positive for the COVID-19. It's the latest in a number of large outbreaks in slaughterhouses.

Super-Cylone Amphan leaves trail of destruction in India and Bangladesh
49,063 views
•May 21, 2020


SUBSCRIBE
India and Bangladesh are trying to assess the damage left by one of the most violent storms in years. Cyclone Amphan made landfall yesterday, killing at least 22 people and leaving a trail of destruction in coastal communities and West Bangal's main city Kolkata. Millions of people there are without electricity and the coronaviorus is hampering efforts to provide relief.

13 Year Old Girl took her Father on Cycle to Bihar from Gurgaon (Delhi-NCR).

Growing evidence suggests that inflammation is the culprit in serious Covid-19 cases. So it is best to eat ginger and turmeric daily as both have anti-inflammatory properties.