San Francisco Uber driver assaulted and coughed on by rude customer after a mask freakout. Is this attack more Asian racism?


An Asian Uber driver was assaulted and coughed-upon by a group of women after he refused them service for not wearing masks. Betty Yu shows us the attack the driver captured on video.

Disturbing video captured the moment California Uber driver Subhakar Khadk was attacked, harassed after asking one of his passengers to wear a mask

COVID-19: Lockdown in Maharashtra's Nagpur from March 15, what's open and what's not
During the lockdown, only essential services will be allowed to operate. 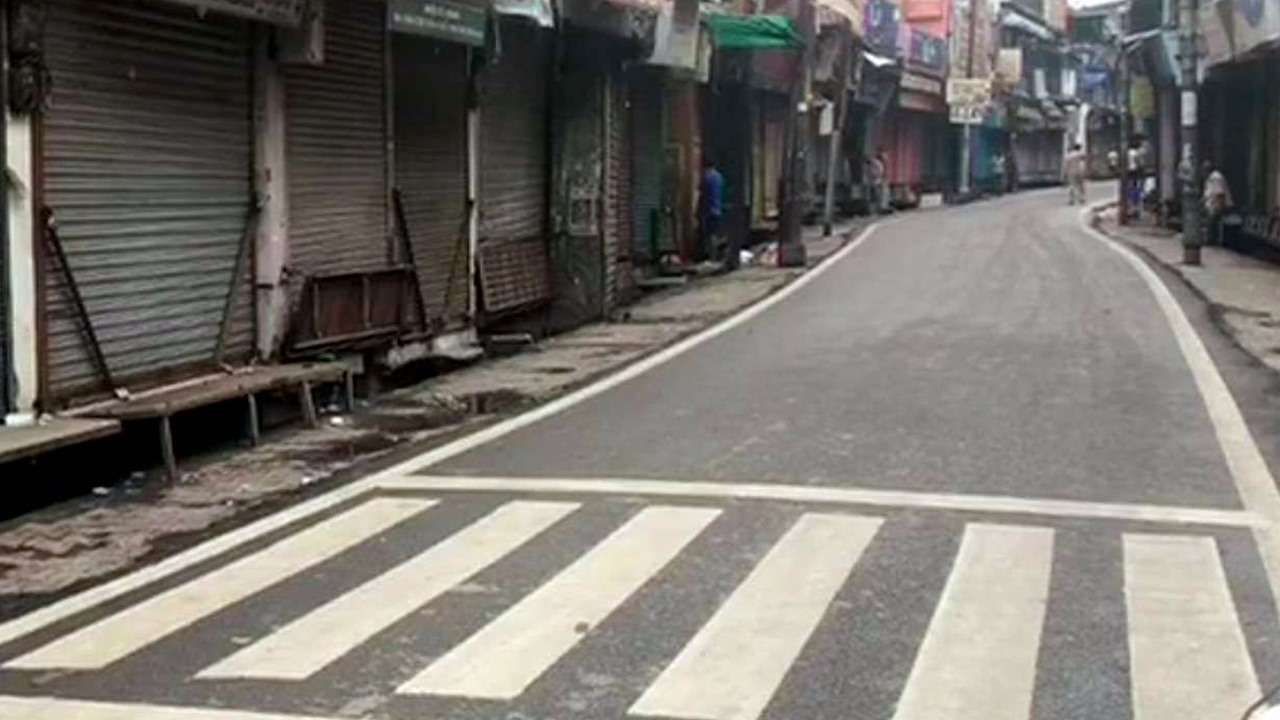 As COVID-19 cases in Maharashtra continue to rise, there will be a lockdown in Nagpur from March 15 to March 21. The move is aimed at containing the spread of coronavirus.
During the lockdown, only essential services will be allowed to operate. Vegetable and milk shops, along with other essential services will continue to operate so that people don't face any problems.
The lockdown has been imposed in all the areas that come under the Nagpur Police Commissionerate.

Interestingly, exactly one year ago, the first COVID-19 patient was found in Nagpur on this day.
The development comes as Maharashtra reported 13,659 new COVID-19 cases on Wednesday which is almost 60 per cent of the country's daily new cases. Notably, six states including Maharashtra, Kerala, Punjab, Karnataka, Gujarat and Tamil Nadu cumulatively account for 85.91 per cent of the new coronavirus cases reported in the past 24 hours, the Union Health Ministry informed on Thursday.
A total of 22,854 new cases were registered in the last 24 hours.
India's total COVID-19 active caseload has reached 1,89,226 today. The present active caseload in the country now stands at 1.68 per cent of India's total positive cases.


COVID-19: Lockdown in Maharashtra's Nagpur from March 15, what's open and what's not
B


An Asian Uber driver was assaulted and coughed-upon by a group of women after he refused them service for not wearing masks. Betty Yu shows us the attack the driver captured on video.
Click to expand...

I do not know who is racist here? The driver denying the ride or women yelling alleged slurs. I am not surprised either. You do not tell Americans what to do and expect no reaction especially women. There is a particular communication style in America. You can suggest things and then leave it up to the passengers to follow them. Mask wearing was never strictly enforced in America. I have interacted with people without masks but I never thought that I have the right to tell others that they should wear a mask. Even at gas stations, they have the policy to mask up, but if you forget then the gas station will provide you one. This driver is an idiot who does not provide a mask, but tells a woman to go and buy it. That is more like throwing a lit match into a gasoline chamber.

Rajasthan makes Covid negative report a must for entry


Police have started random checks on vehicles at Shahjahanpur border
Gurgaon: The

Rajasthan
government has made a negative

RT-PCR
report, not older than 72 hours, mandatory for anyone entering the state from Haryana, where Covid cases are rising again.

Police
set up a camp at the Shahjahanpur border on the Delhi-Jaipur highway and started random checks on vehicles, especially those with HR-26 (Gurgaon) registrations.


Those stopped were asked to produce a negative report of an RT-PCR test done in the last 72 hours, a move that took many by surprise. Commuters who could not produce such a report were turned back while those who agreed were tested at the checkpoint and their details noted down. The police personnel also stopped farmers who were headed to the protest site at Shahjahanpur.


A senior official of the Rajasthan health department told TOI on Thursday that the government had last week issued an order for commuters from six states, including Haryana, to carry a negative test report for entering Rajasthan.

“We have started to check people at various entry points. A special focus is on the districts adjoining Rajasthan. We are also keeping close tabs on the rising Covid cases in the neighbouring states. For those using public transport such as Volvo buses and trains to come to Rajasthan, we have deployed a separate team that will check the temperature and note down details of passengers at major bus stands and railway stations,” he said.


“We have also set up camps at border areas, where vehicles are being stopped randomly and occupants are being asked to produce a negative RT-PCR report. In case they are unable to produce a certificate, we are asking them to take a

Covid test
right there. This is likely to become the norm for the next few days at all our border points. We urge people to get themselves tested as cases are rising,” the official added.


For frequent travellers like Vikas Lamba, a businessman, the move was a cause for concern. “I travel often between Rewari and Alwar and was surprised when they stopped me at the Rajasthan border on Thursday morning. I tried to reason with the cops and explained to them that it was crucial for me to go to Alwar. After much persuasion, they let me go, but not before noting down my details and checking my temperature,” he said.

Guruvachan Singh, a farmer who has been at the Shahjahanpur protest site for the past few days, was heading home to Sri Gangangar when he was asked to undergo an RT-PCR test. “They allowed me to go after the test. The result is awaited though,” he said.

Gurgaon reported 104 fresh Covid cases on Thursday, taking its tally to 60,201. It was after a gap of two months that the district reported more than 100 new cases. As of Thursday, the city had 659 active cases, and 600 of the patients were in home isolation. On the other hand, Rajasthan reported 327 new cases on Thursday, 81 of which were recorded in Jaipur and 7 in Alwar. 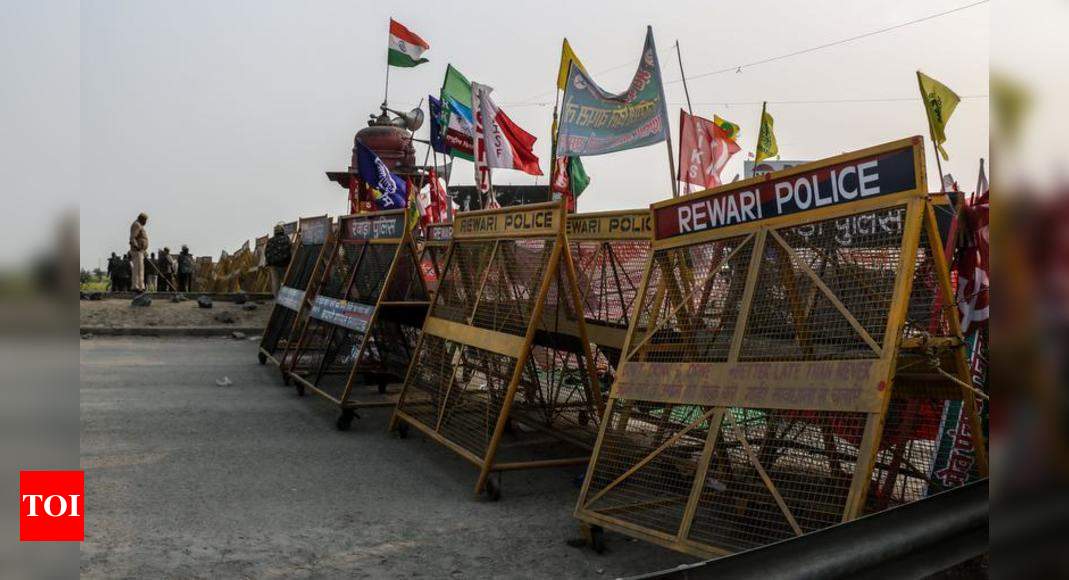 Gurgaon: The Rajasthan government has made a negative RT-PCR report, not older than 72 hours, mandatory for anyone entering the state from Haryana, wh. 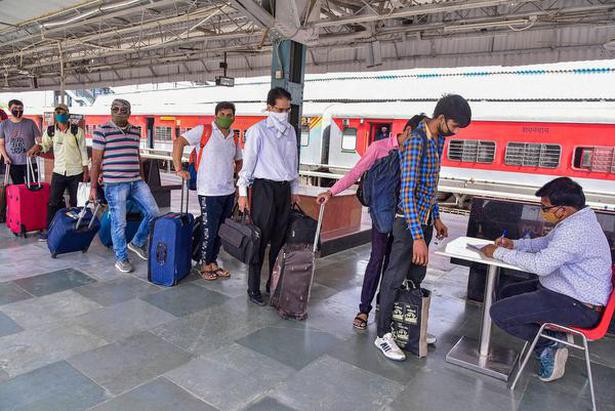 A health worker receives details of passengers arriving from Maharashtra for COVID-19 tests upon their arrival at the Bikaner Railway Station. | Photo Credit: PTI

Amid a surge in coronavirus cases, the Rajasthan government has decided to impose night curfew in eight cities from Monday and also made it mandatory for people visiting the state to carry a COVID-19 negative test report.
Officials said the night curfew will be imposed in Ajmer, Bhilwara, Jaipur, Jodhpur, Kota, Udaipur, Sagwada (Dungarpur) and Kushalgarh (Banswara) from 11 p.m. to 5 a.m., they said.


The decisions were taken during a review meeting chaired by Chief Minister Ashok Gehlot.
It was decided that travellers coming to Rajasthan from other states will have to carry RT-PCR negative reports (not older than 72 hours) from March 25, officials said.
If the RT-PCR test report of travellers are not negative, they would have to remain in quarantine for 15 days, officials said.
It was also decided that markets in urban local bodies will close by 10 p.m.
Rajasthan on Saturday reported 445 fresh coronavirus cases, which pushed the state's infection count to 3,24,948, according to an official report.

People from outside Karnataka will have to carry a negative coronavirus test report to enter capital Bengaluru from April 1, minister Dr K Sudhakar informed on Thursday. "Nearly 1,400 cases have been reported in Bengaluru (on Wednesday), which is the highest in the last 4 months. There is a spike in cases every day. It is increasingly found in passengers arriving in the city from other states," he said.
You must log in or register to reply here.
Share:
Facebook Twitter Reddit Pinterest WhatsApp Email
Top