7 years ago I did a ride and termed it as Crazy Himalayan Ride. In reality it wasn’t really crazy, it was just my attempt to do a day ride to Hills, since due to my mom’s illness I didn’t really had time to do multiple day trip. A single day ride on the other hand was certainly possible and I wanted to see if I can actually do it and be in hills, despite the constraints at home. And I managed to do exactly that, covering 780kms in 22hours and 30mins.

Fast forward to 2015, my year of travel with 12 trips already done, including 2 Ladakh trips. However none of the trips were done on a motorcycle and although I had taken my sweetheart out on NH-8 multiple times, however those were 200-400km round rides. In fact the motorcycle ride I did to hills was back in 2011, BCMT Shoja meet. Thanks to multiple back problems, life and other issues, travel and in particular motorcycle travel had taken a back seat for past few years.

However this year had allowed or rather forced me to put myself first after a long time, and even though I wanted to do 2-3 trips in the last remaining days of this year, it is starting to look harder and harder.

So even though my cervical issue had escalated a few weeks ago, leading to numbness of fingers (on top of the accident a few months ago, when I injured my back again) and I hadn’t recovered fully from me it. I decided to do this ride, since I needed to blow off some steam, be alone for a while and more importantly, shoot the photo I had been thinking about for a while now.

Plan to ride out was made couple of hours before the actual ride. I took my backpack and put my tripod, Canon 60D with Tokina 11-16 f2.8II and remote shutter release along with spare memory cards, cleaning supplies and spare battery. I also packed a sweater and couple of packets of biscuits along with life straw bottle.

At around 5pm I started from my home, first stop was at the petrol pump to get my sweetheart’s belly full. After a tankful, we headed on the Ring Road towards bypass.

Motorcycles have a tendency of being in mood for a hard ride on certain days; today my old gal was in such a mood and was accelerating hard and fast. However that acceleration was of no use, till we cleared the jam from Azadpur Mandi to bypass and were finally free to cruise on the wonderful NH-1, just as darkness engulfed the sky. 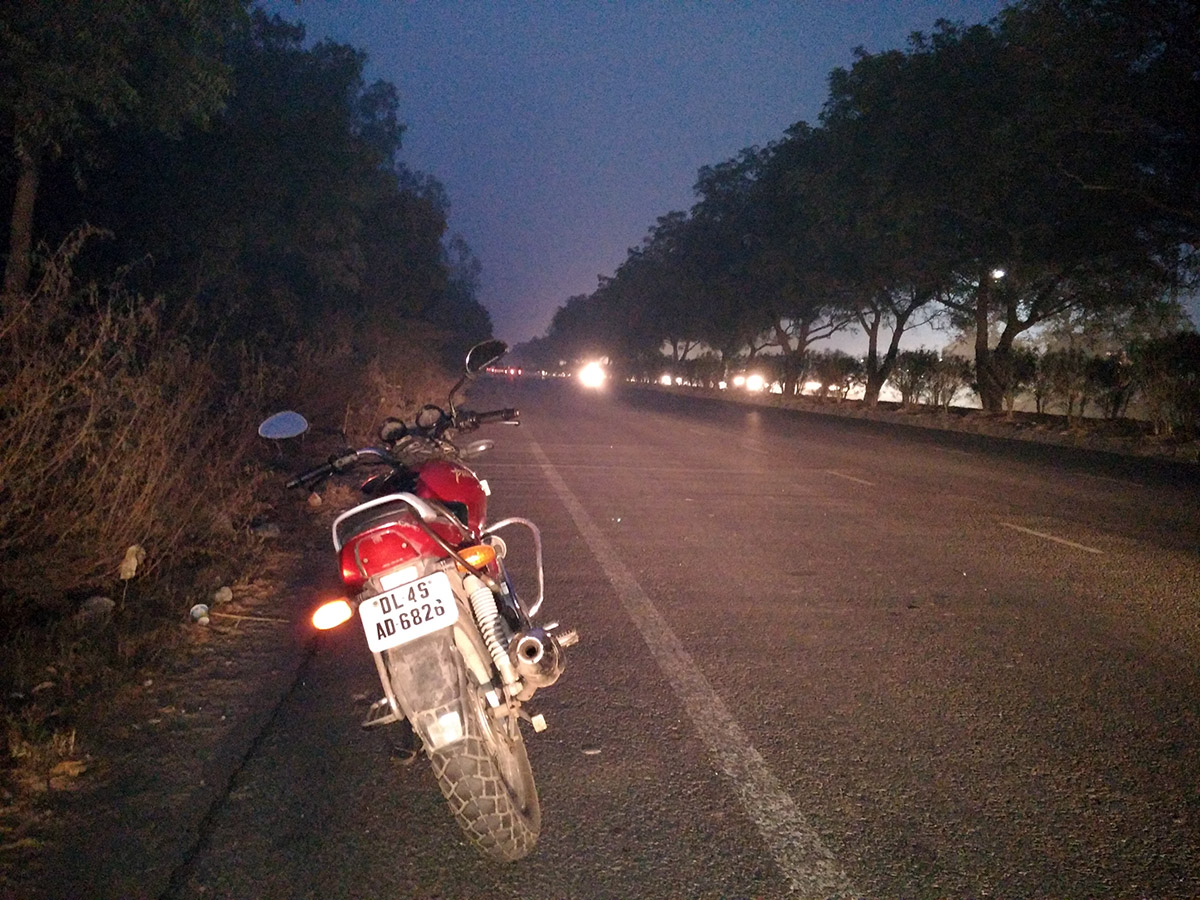 For a change I was listening to music while riding, which made the ride even more fun. In any case I had to let Google aunty guide me to Renuka Ji and thus had to keep the earphones on. However in the middle of listening to music and play cat and mouse game with people emerging out of darkness to cross the road (even on top of flyover!) I missed the turn it seems and then Google Aunty proceeded to take me through Ambala.

As usual she took the road less travelled i.e. Staff Road, which became sort of off road track towards the end!

By the time I joined State Highway 72, I was feeling cold and hungry. So I stopped at a small road side dhaba for dinner. Ordered daal makhani and rotis and wore my sweater over the tshirt I was wearing under my riding jacket. 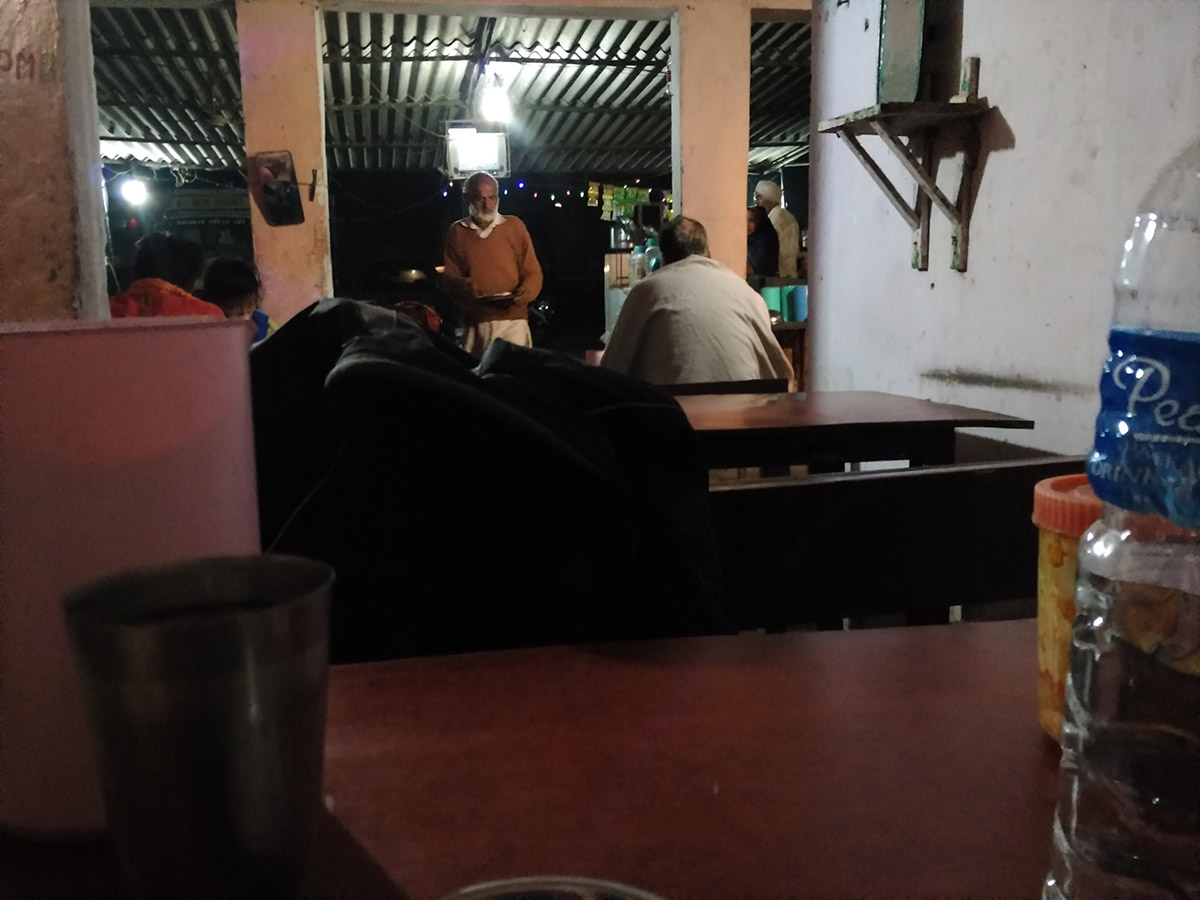 However my hands wouldn’t warm up, granted I had chosen to wear summer riding gloves, however I do that all the time and usually effect is not so bad. Even warm tea didn’t help and I knew ride had just gotten tougher.

After having my fill, I rode towards Nahan. Even though the road didn’t have any dividers, traffic was sparse and I managed to reach Nahan at around 10:45pm. From Kala Amb, hilly ride had already begun, but after Nahan it got interesting.

While riding I came across only a handful of vehicles and riding alone in dark and that too in hills was both challenging and fun. I came across quite a few rabbits en route, and they would jump on to the road and run in front of the motorcycle and slow me down.

Something I didn’t really wanted to do, since my hands were hurting due to cold and when I stopped in front of a home stay to take a breather, I tried to warm up my hands by placing them next to the engine, but it didn’t really help. 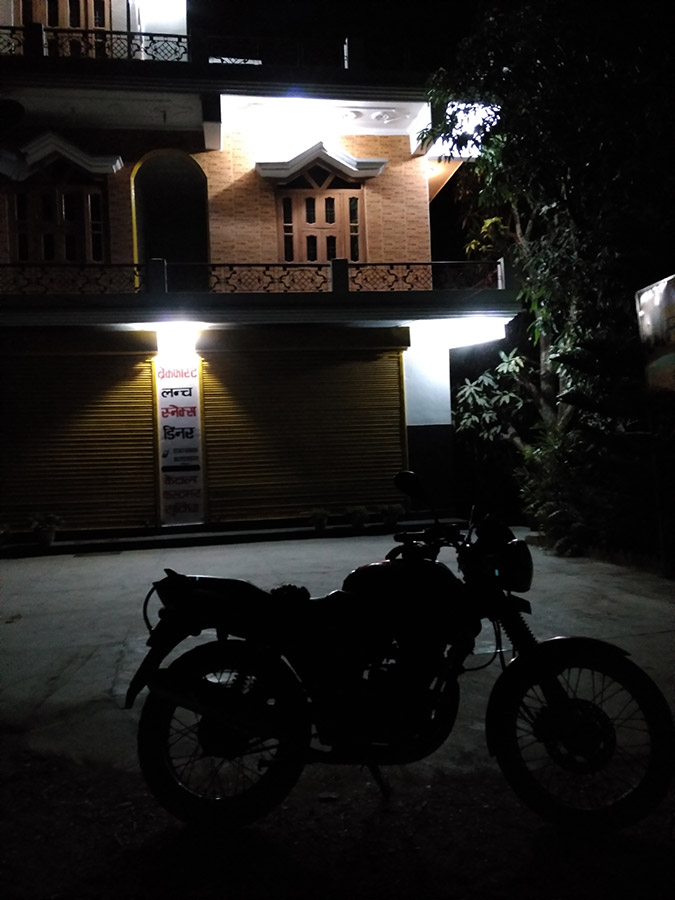 I managed to reach Renuka Mata Temple at around 12:30am. After scouting for the perfect spot, I took out my DSLR for the first time and set it up on the tripod and started shooting the collection of photographs I needed for my star trail image. This also meant I had to wait for over an hour, next to the lake, even though I was shivering by the time I had reached there. 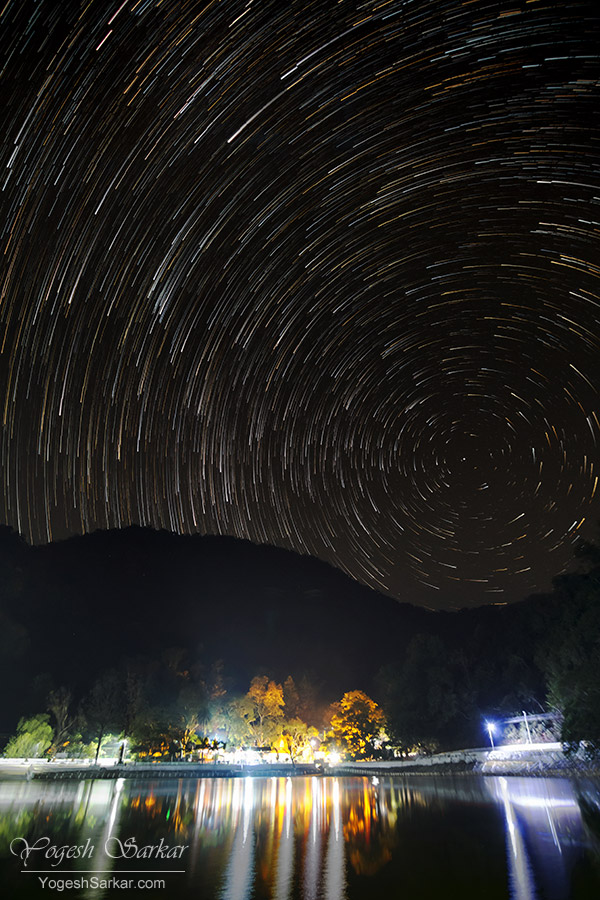 After more than an hour and a half of shivering and trying to keep warm, I took my camera off and placed it back in the bag and decide to ride back, since I had to reach home by 9am and started riding back towards Nahan at around 2am.

Around 3:30am I was at a teashop 7km before Nahan, trying hard to bring some life back into my hands and to stop shivering with the help of tea. 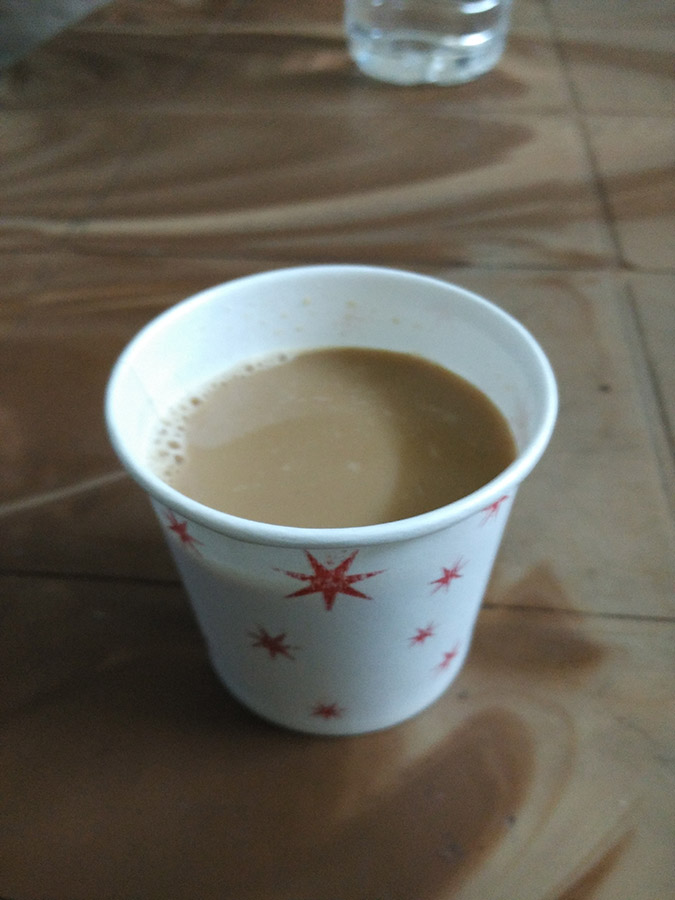 However 2 cups of tea didn’t help and after spend around half an hour there, I decided to move on.

Add to the cold, I was getting thirsty all too often and had to stop for water and pee break almost every 20mins!

Once I hit the SH-72, Google Aunty once again tried to lead me towards the same route, however I avoided it and stuck to the route my gut was telling me to ride on and eventually managed to reach Ambala around 5:45am.

Since I was trying to reach Delhi by 9am, I rode between 90-100kmph, which compounded the problem since I started feeling colder and I was shivering almost nonstop. Even my cordura riding jacket was letting in air, that too right in the chest! As if that wasn’t enough, a brief shower made my jeans damp and I started feeling even worse! 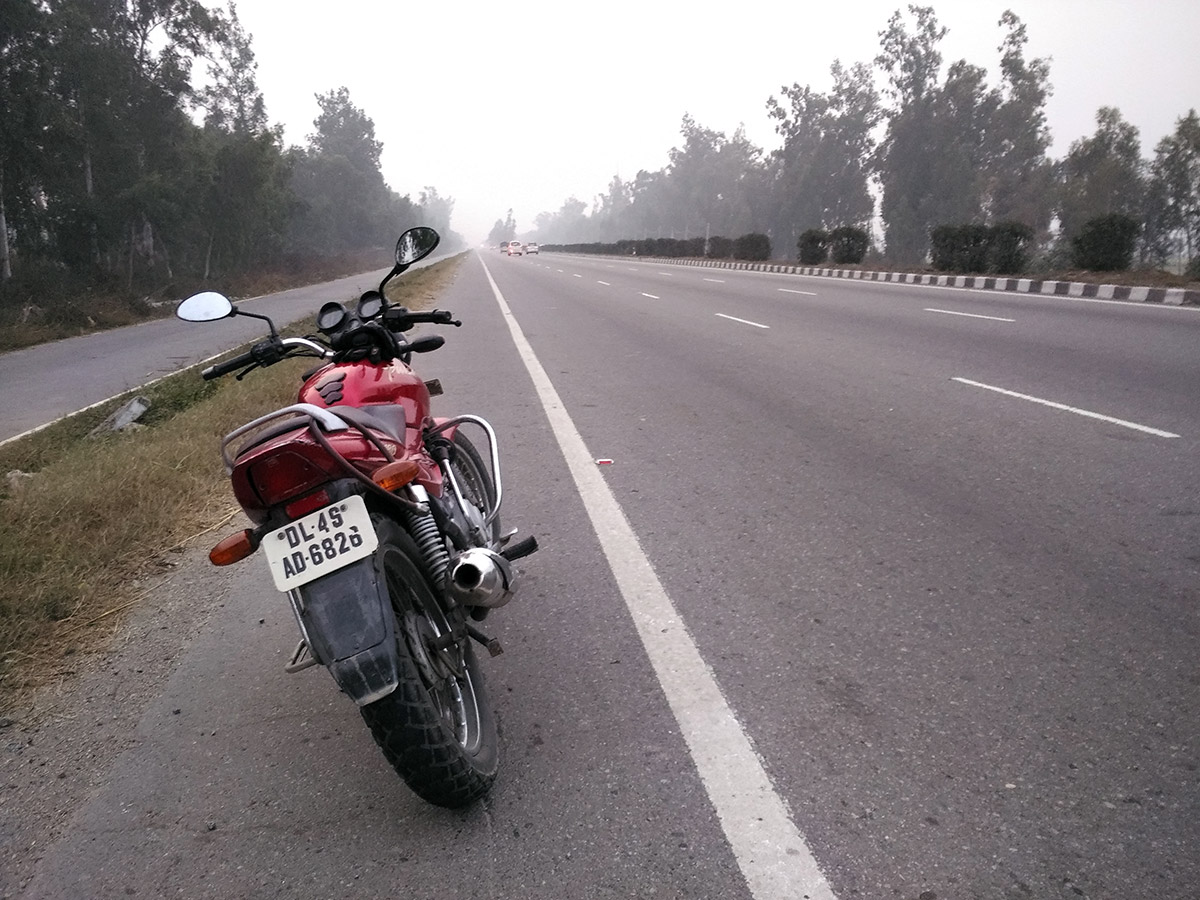 By 7:30am I had crossed Karnal, mostly delayed due to multiple breaks. Eventually it dawned on me that no matter how hard I try, I wasn’t going to reach home by 9. In fact I would likely reach by 11, so I decided to stop at a dhaba for breakfast, which I had been avoiding for past couple of hours or so.

An aloo paratha and 2 cups of tea, yet I was still shivering. My sweetheart on the other hand, was standing outside diligently, without even a hint of power loss and still in the same peppy self she had started yesterday with! 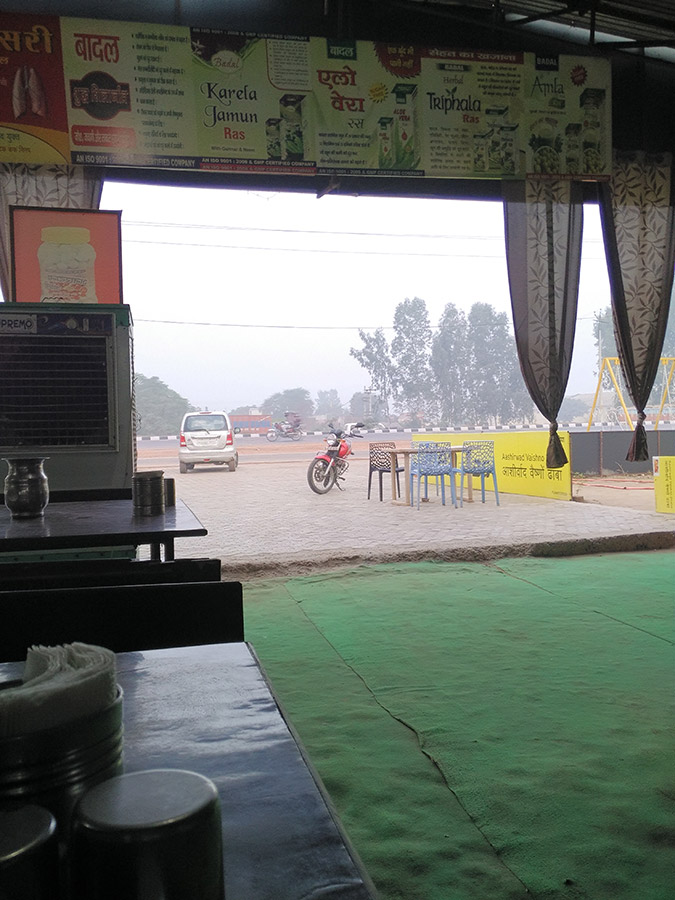 After breakfast I decided to take it somewhat slow and mostly rode between 70-85kmph and with sun playing hide and seek behind the cloud, I still had to ride in cold.

However by the time I reached Delhi, sun was out and even though I was caught in rush hour traffic, I was feeling alright and I managed to reach home at around 11am.

Covering 638km in 18hours and my old gal was not only being peppy, but was also extremely frugal with a mileage of around 48kmpl!

Overall it was fun ride and totally worth all the stuff I had to go through, because even as I write this travelogue, being awake for more than 33hours, I feel more relaxed and energetic than I had felt in the last few days…
Last edited: Dec 10, 2015

great. 33 hours continuous ride, that a great come back after 4 years

Staff Road!!!!
You missed my place by a few hundred meters, should have called me

mintu said:
great. 33 hours continuous ride, that a great come back after 4 years
Click to expand...

Thanks Mintu, though the ride was for 18hours. I have been awake for almost 34hours now.


akshay4384 said:
Staff Road!!!!
You missed my place by a few hundred meters, should have called me

Didn't call as I was on a schedule, will do it next time around

Fantastic write up YS
and a great ride

Always enjoy ur travels to the full

Staff member
Good to see you back on the saddle brother. How did the back hold up?

You forgot Hand Gloves ?
Newspaper or polybag or any other layer can prevent front chilled wind attacks.
You can put bag in front with strap on shoulders !

sanuroxz said:
Fantastic write up YS
and a great ride
Click to expand...

Always enjoy ur travels to the full


darkside_of_d_sun said:
Good to see you back on the saddle brother. How did the back hold up?

You forgot Hand Gloves ?
Newspaper or polybag or any other layer can prevent front chilled wind attacks.
You can put bag in front with strap on shoulders !
Click to expand...

I had gloves which let in air. Sadly didn't have plastic bag, apart from the one protecting the camera and I won't use that .

...And you used to say I did not click photos..