My name is Shubh Anshuman. I want to present a dream that I lived during the Summer of 16. Its a story of 5 stranger who followed a simple therepy of Ride-Eat-Sleep-Repeat in the terrains of Ladakh and became brothers.

The Group from left : It was Arun from Pune, Anuj from Lucknow, Myself from Gurgaon, Anurag
from Ranchi and Manish from Gurgaon. 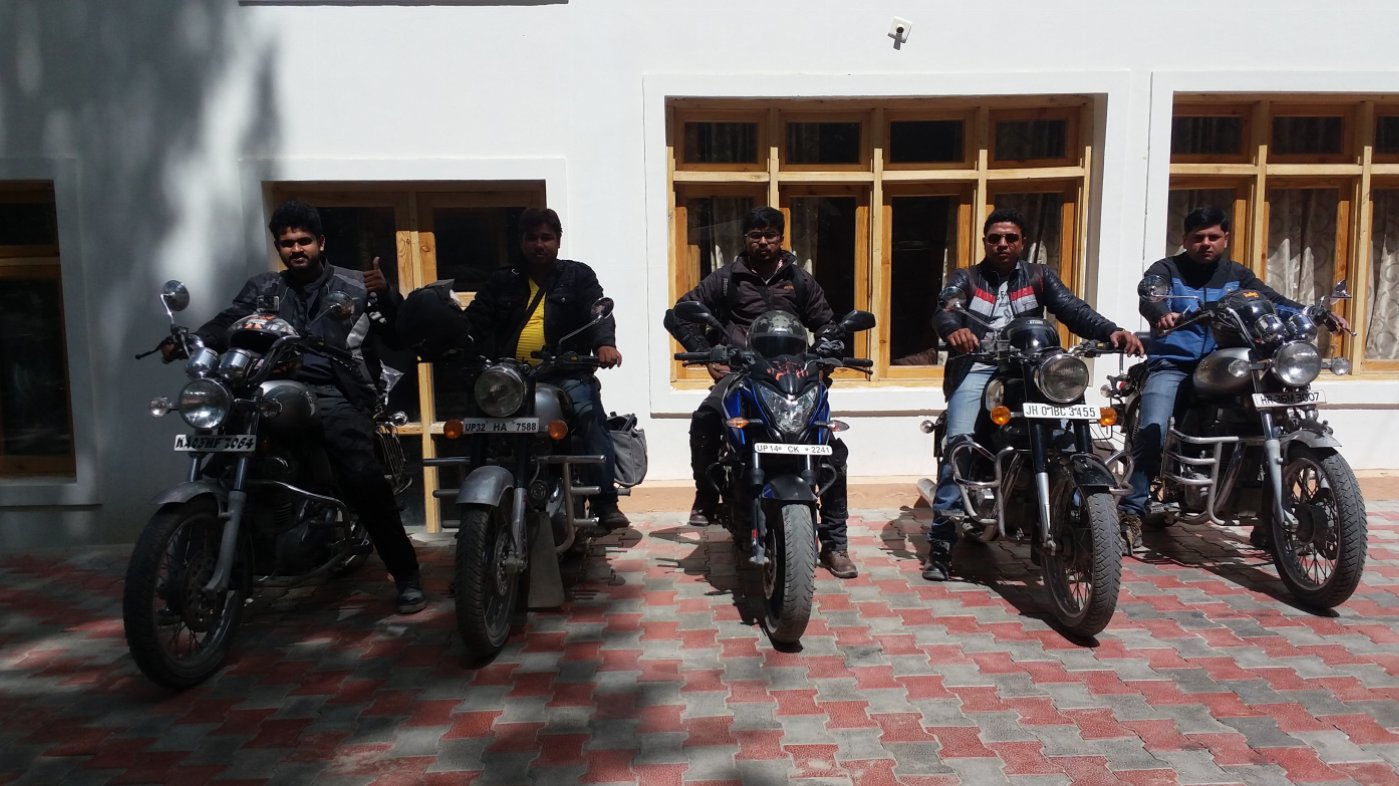 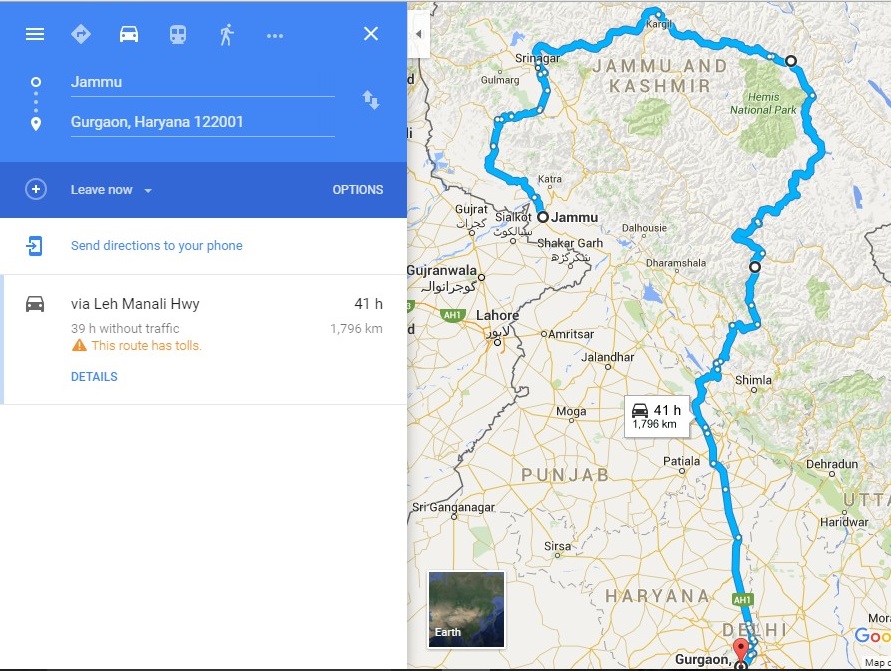 
Following the rituals, here is the teaser: 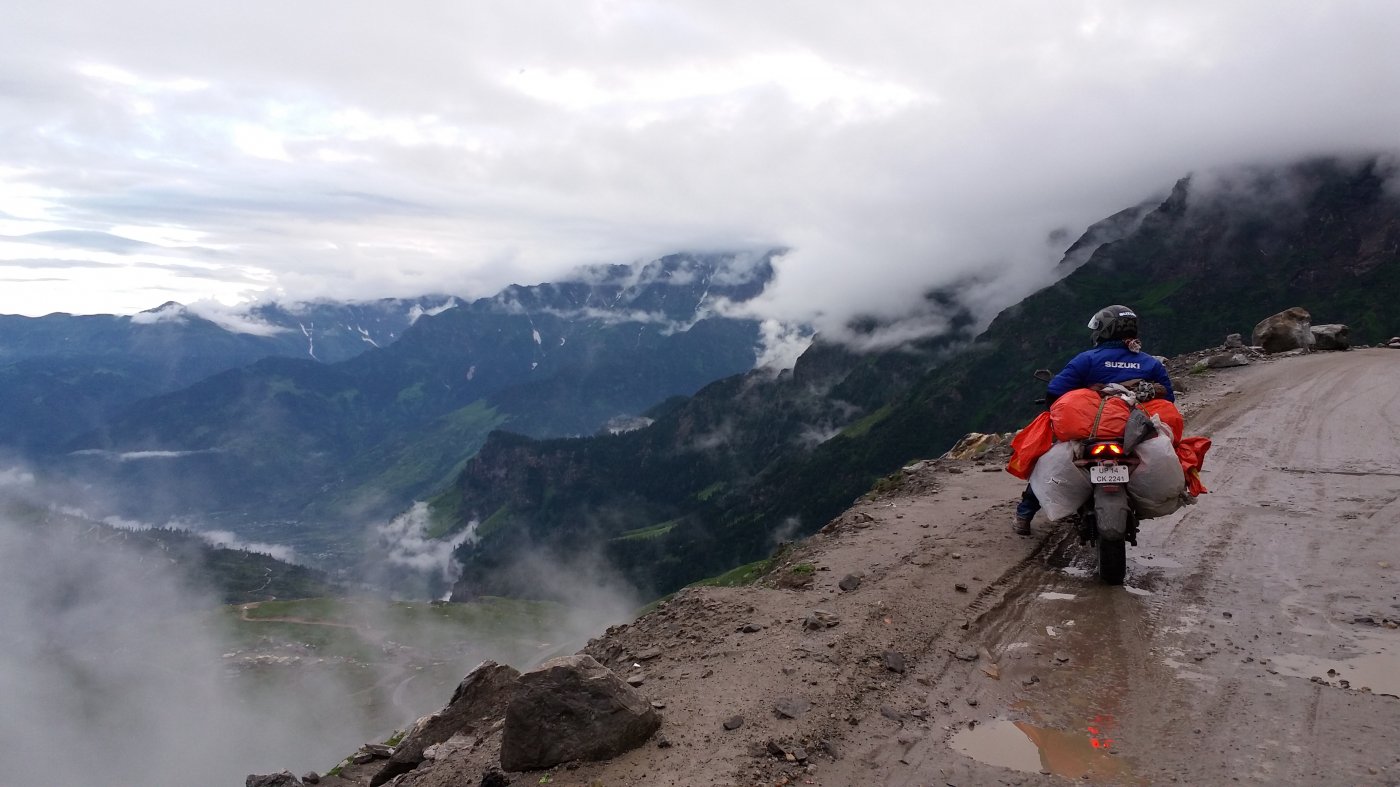 C'mon Shubh, open the throttle and rock with your Travelogue.

My name is Shubh. As a dream of many to go on Ladakh bike ride, It was my dream too and I lived it

Will wait for approval and will share complete travel story along with useful detail in next post.

Your travelogue is approved.
You can post any no of posts but first some posts are approved by mods only.
But don't worry.
You are doing good.
Just post your words and pics without any hesitation.


Actually I don’t know how or when this trip idea was initially generated, but all I know that I was planning for Ladakh Bike ride from last 4 years. Made Plan many time but it never landed off papers.

I works for Suzuki and twice a year for a week plant goes for shut-down leave for maintenance purpose. Since shutdown was 2 month away, I again started making plan for the trip. Friends and known person had showed interest but no one finalized for the bike ride in the land of high passes. On one good day, Manish bhai came and asked me about my plan and within minutes he was ready for the trip. You can guess my happiness after trip finalization.

Anyway, I started my preparation for the trip. Meanwhile I also decided to add some more friends for the trip, hence I posted trip detail on various FB bikers and Ladakh group to add more members who is looking for group ride. Thanks to social media responses were very warm.

After lots of call and discussion with various riders, 5 rider’s itinerary got exactly same as mine. They were Anuj from Lucknow, Arun from Pune, Anurag from Ranchi, Hemraj and Pradeep from Jaipur (Later Jaipur guys decided to join other group). First thing first we made a group over what’s app and riders were made to interact with each other and to discuss regarding trip and most importantly to become friends, being all boys group and with some common interest in Ladakh and liquor things went very well and today after this trip and all, we are more as brothers.… we named the whats app group as Ladakh diary. 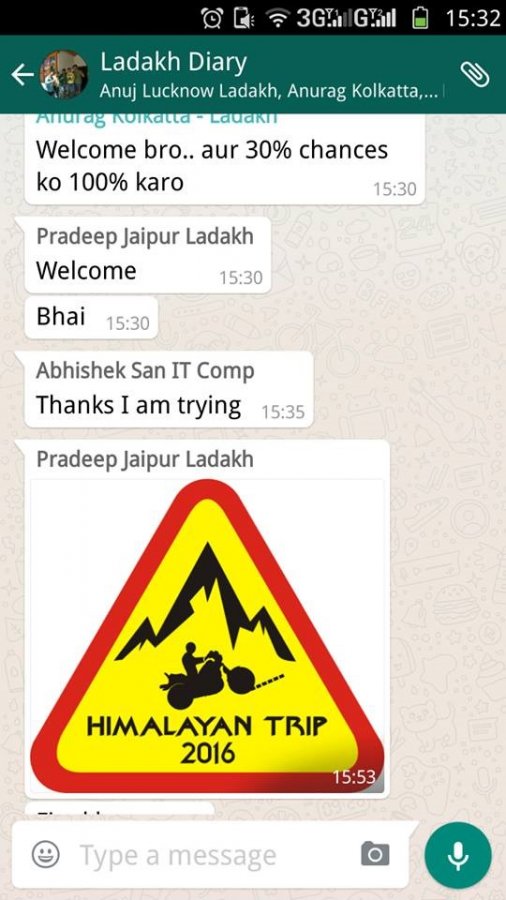 And with the intro chat we came to know about each other bikes which were as follow:


Meanwhile, I was preparing for the trip to leave no stone unturned, and to avoid any life threating risk in mighty mountains. Thanks to online travelogues, I got to knew about the region, route, stay points, adverse situation, medical req. and etc. After lots of discussion we finalized over the following itinerary for the trip:

Now since it was a bike trip, Luggage and its packaging was one of the most important aspect for a hassle-free travel. With the help of previous riders experience and travelogue along with Looking after diff aspects of region, weather, route, emergency and unwanted situations I have shortlisted luggage for the trip:

This luggage list may looked summed up, but finalizing it was one heck of task. During prep. Period perhaps on every single day things were added and omitted. Except this list, I have carried one additional blanket as a precaution.

In between these I have booked my train tickets in Jammu Rajdhani (Unfortunately it was WL 89 but later got confirmed). For bikes initial plan was to load in same train but later I came to know that Manish bike was not on his name (One cannot book direct railway parcel if Bike is registered on other person, except family) and he has no clue about the owner current location. We were aware of the J&K strict condition and asked my known logistic company regarding our problem. They have suggested instead of booking directly railway parcel, book it through 3rd part logistic. We did the same and got quote of Rs. 2750/ bike for Jammu booking.

With working schedule of 6 day a week you don’t get enough time for literally any other thing to do. I hope many of you can understand my pain.

So we came up with plan to take field duty office time for shopping ( Shhhhh….. that never happened…. You have never heard anything like that)

So we went for shopping….. 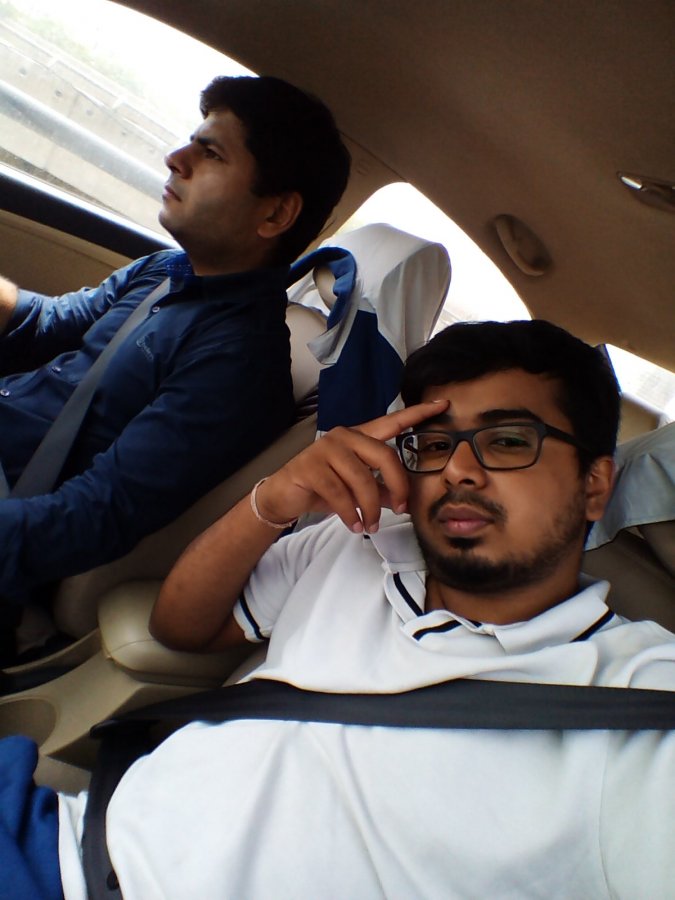 And destination was Karol Bagh… Home for Ladakh Shopping 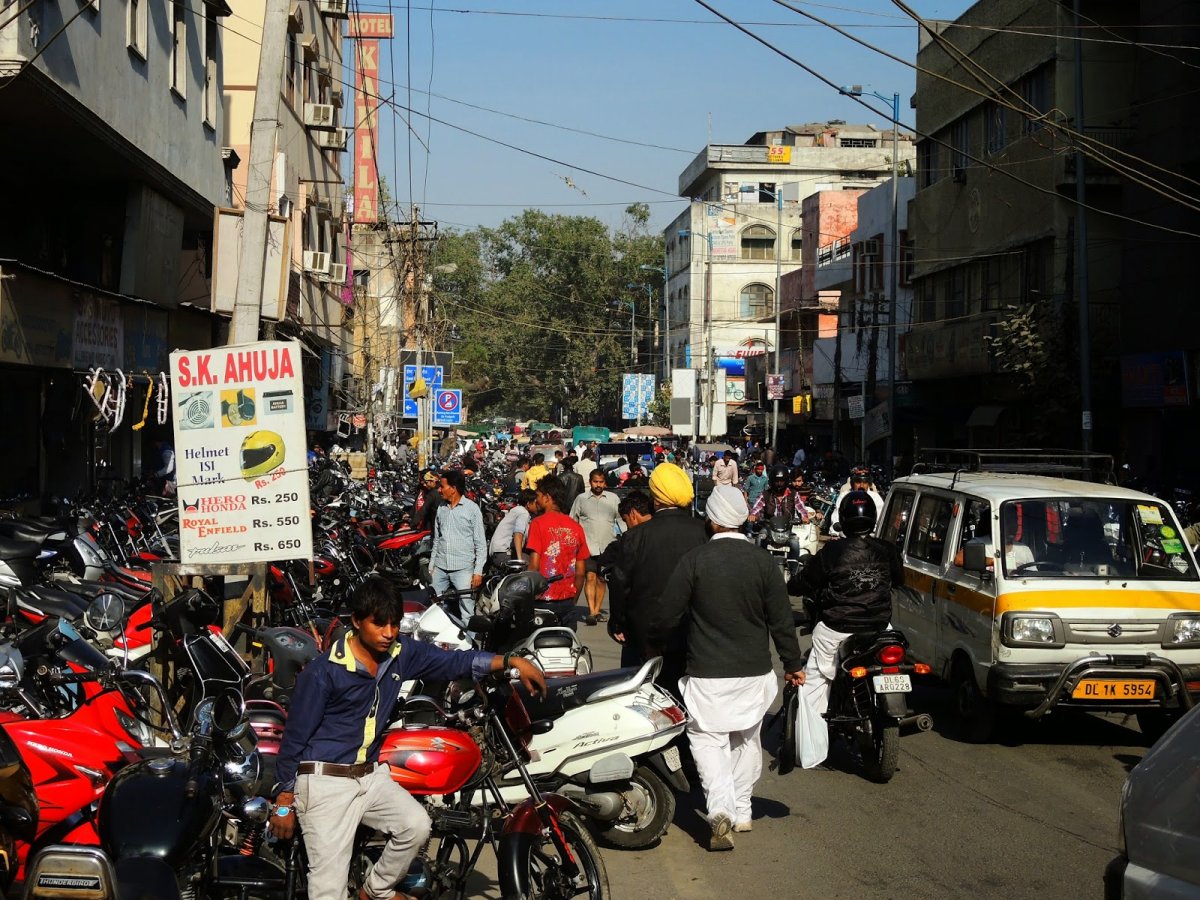 We were thinking that during this mid-day we will be only two fools looking for Ladakhi item. BUT we were amazed that 80% of bullets over there getting ready for Ladakh, Not only bullet we saw H- Davidsons and even a triumph getting beefed up for the ladakh trip. You’ll find every single useful and nonsense bike item in karol bagh. So, we started roaming around in market looking for our list of items. We had mainly two major item to purchase, first Saddle bag and other was safety accessories. But we bought many other useful ones. Starting with saddle bag we saw price range from 1000 to all the way upto a kidney. Lastly we found a very good quality bag (40Ltr) for the cost of Rs. 950, so we bought it, here is a pic of it: 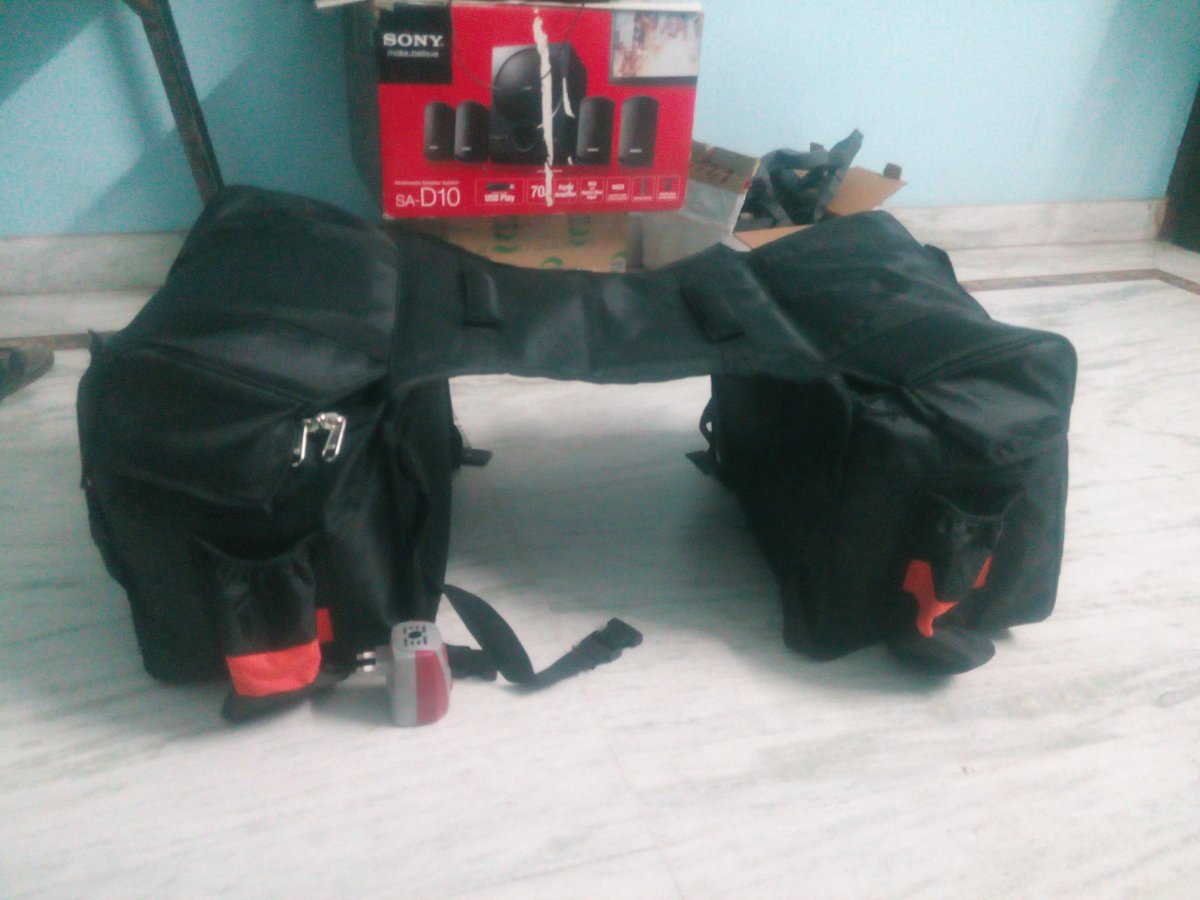 I have place mosquito repellent for size reference

After that we started looking for knee and elbow guards. We tried many models from Axe, Fox and scoyco. IN short fox was cheap in quality and price, Axw were not comfortable. At last looking over many product we finalized Scoyco k11 for Rs.1350 along with Pro bike riding gloves for Rs. 250. Following are the pics of it: 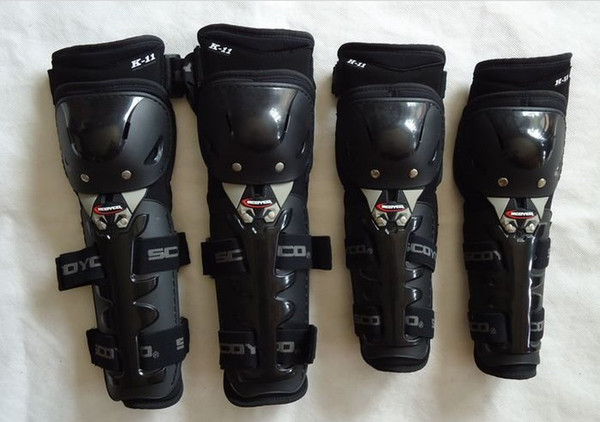 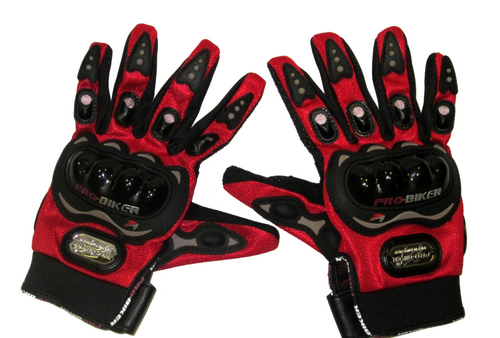 Some other items bought on that day was , a used but new stock classic 350 silencer for Manish thunderbird, Thunderbird front tyre, chain lubes, Clear Visor my Axor Helmet, Bungee Ropes and a puncture kit.


Now as the judgement day was coming near, time has start running slow, we were getting impatient about the trip. Discussion over the group was getting deeper and deeper every day. All of us were super excited about the trip. With the help of each other we were preparing for the trip.


With 2 more weeks to go, I have given my bike for servicing. Changed Engine oil from regular bajaj oil to Motul fully synthetic 7100 20W50 (bought 2ltr from snap deal at price of 695 each), coolant top up, oil filter was changed, suspension was changed to Soft, Tyre changed from regular Mrf Rev Z – 130 mm to rev Z 140 mm for better grip( turned out to be wise choice). 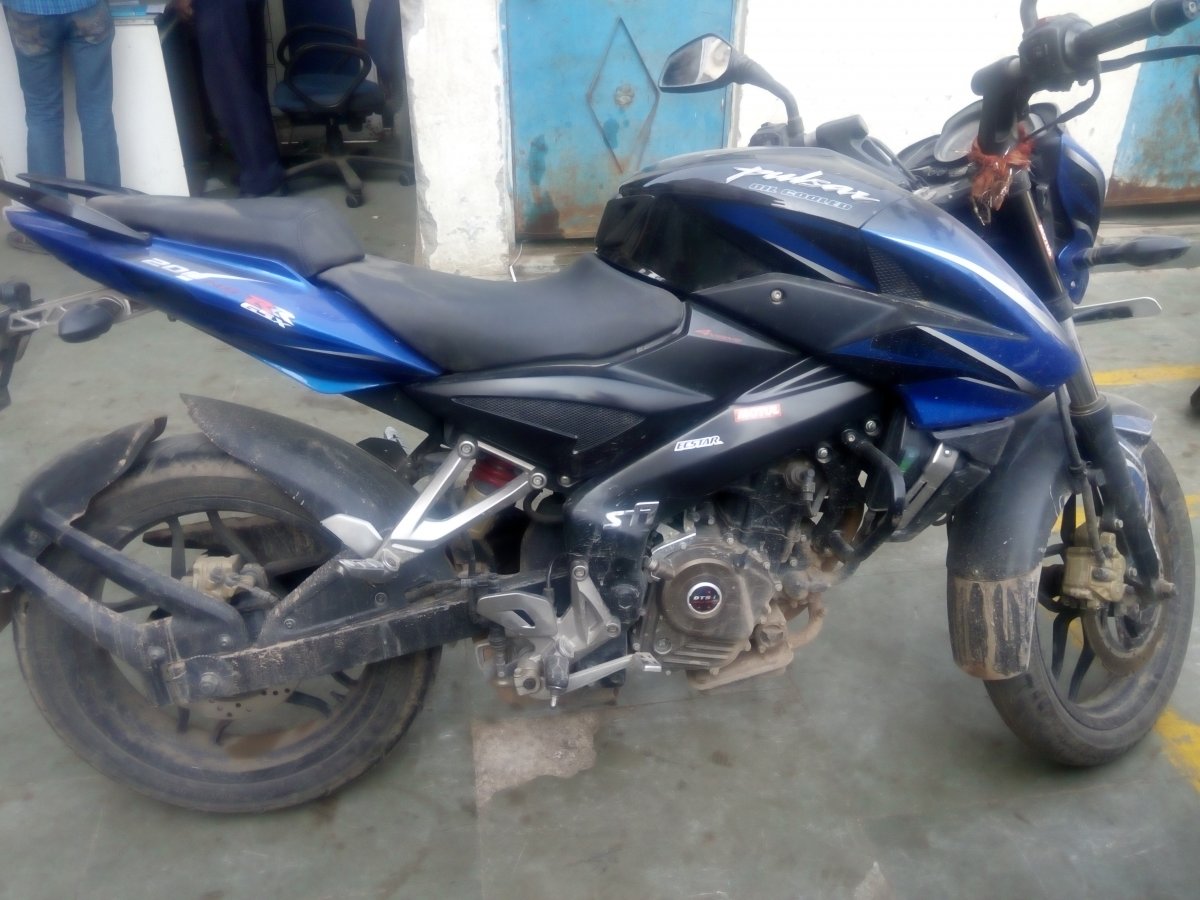 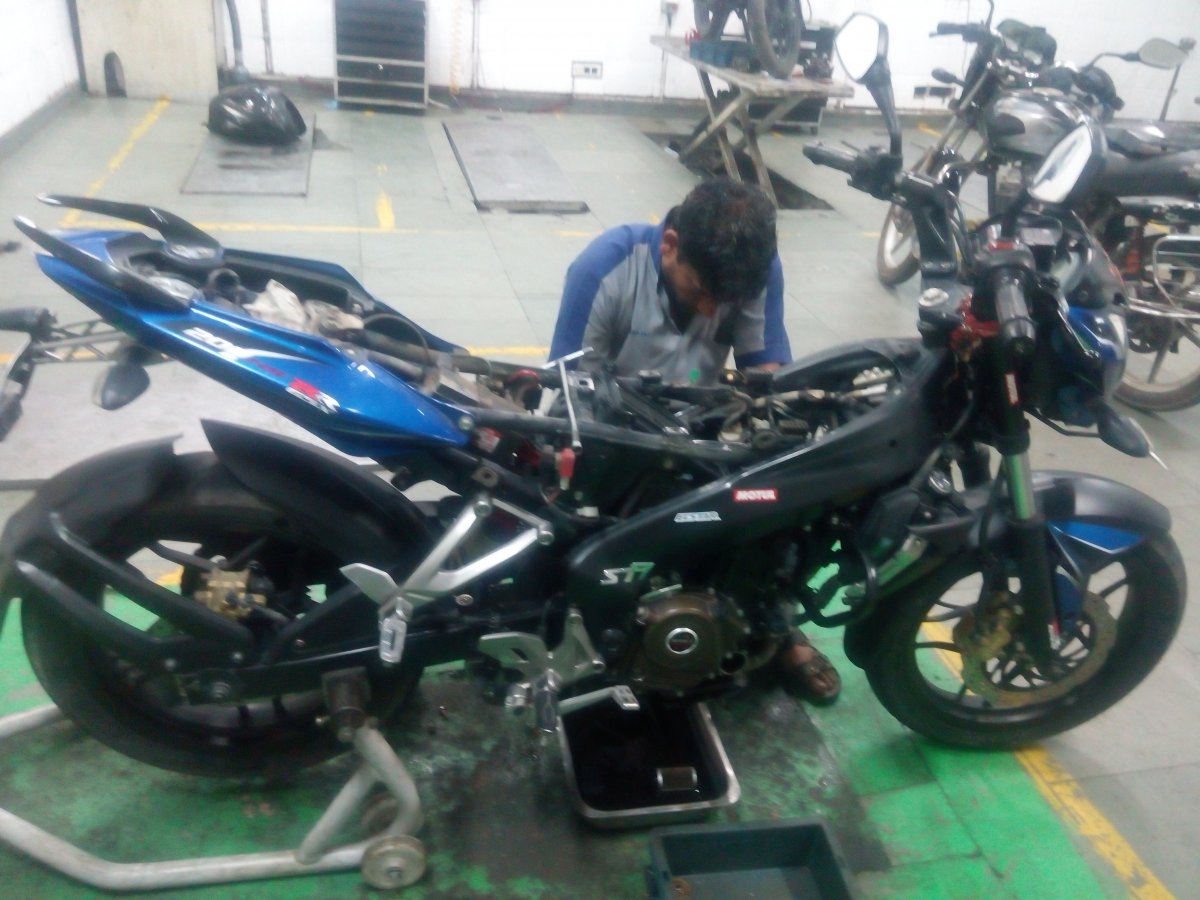 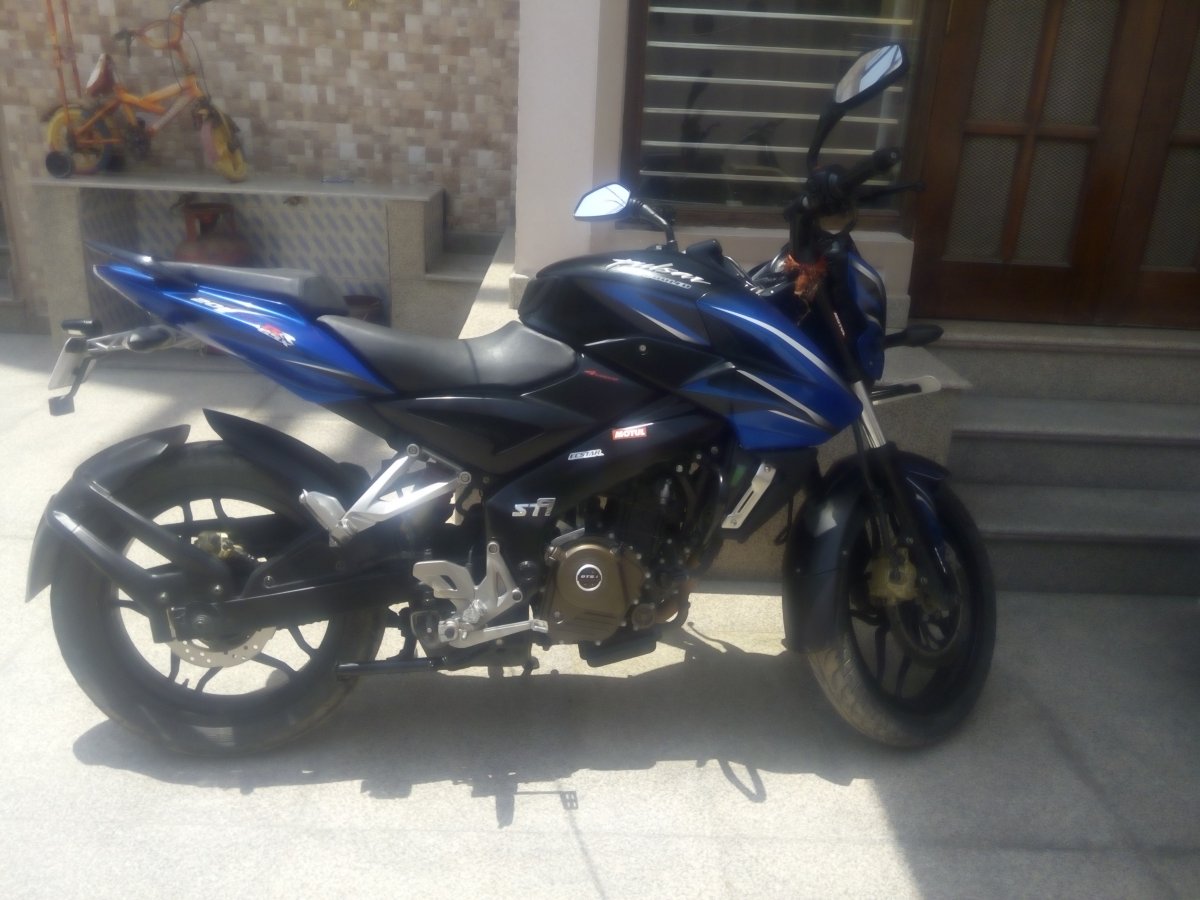 By the end of the day Bike was ready and my combat shoes were also delivered: 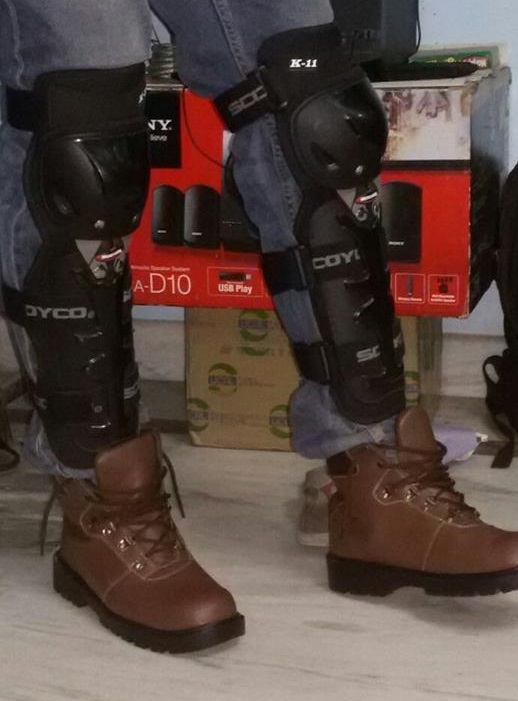 For next 2-3 day I did some trial run with luggage on bad road for luggage stability. There was an issue, even with soft suspension ride was still hard and could cause serious back pain over bad patches. Thanks to Manish who provided Ertiga’s seats and custom cushion was made.

But during trial run I did a mistake that I have not tried it along with luggage water cover, it did created trouble for me during trip. 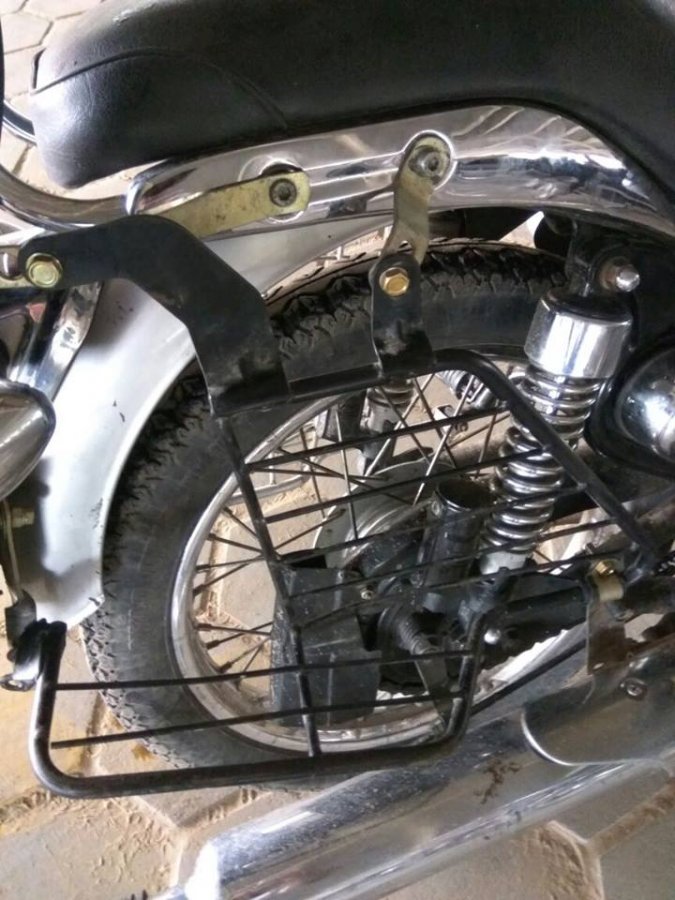 Again bike was brought back, this time it was claimed that front master cylinder is jam and need to be changed. We have no other option we opt for change and bike was under maintenance yet again. The next day bike was fitted with new brake cylinders, did a short trial for 30Km. Thank god, everything was Ok this time. Next day was shipment day.

On 22nd June, We left early from office and went directly Delhi railway station for bike parcel. Our logistic person took away from there. Packaging and shipment were done for Jammu. 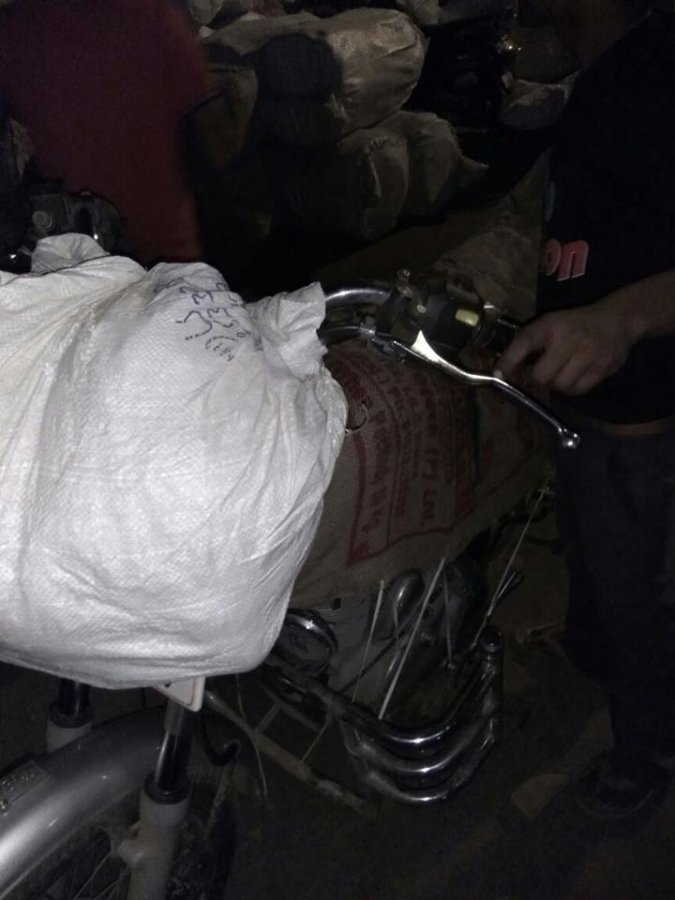 Great preparation for a great ride. Did you carried extra fuel? If yes, how & how much?
Keep writing.