Roads were in good except a 2km patch in Jhansi which took me to that highway.
Approx 865 km were covered and hatthi was happily cruising somewhere 80-90 kmph and gave mileage of around 16 kmpl full tank to full tan

In Bundelkhand there were many reservoir on the route and they were beautiful..
This one was just after a toll plaza..

Once sunset happened I was looking for road side dhaba, they were available in plenty. There was problem they were truck dhaba , since living and travelling between himachal, uttarakhand, punjab , Haryana has made our thought process such that truck dhaba's and car are altogether two different entities.

However this is not the case in MP, so decided to call it a day at a dhaba few km before Lakhnadon.

While traveling to other states (other than list mentioned above) make sure that you prob about the food that is being prepared.
In MP they put garlic like we make use of onion, and that too they don't fry it well so that switches off the mood. The best part of the dhaba the food is cheap but they serve only 4-5 items like daal, sev ki sabzi, and egg curry.

Post dinner I decided to enter my sleeping bag and slept like dead , as due to excitement I didn't had proper sleep last night.

Day2:
Woke up early morning.
Worried about getting seen in field with pants down, so searched for a bush behind which I can easily hide.
Post attending nature's call time for breakfast. I asked him for some milk and took out cornflakes.
A good start for the day..

Post breakfast work from car started. Got up for lunch order sev ki sabzi and went to take bath in the common area behind the dhaba. There were few truckers who carrying harvesters to Andhra Pradesh from Malerkotla , had few words with them.
Sun was in a very high mood so plan was to cover the car windows with cloths so I covered it with the washed cloth's , they will get dry faster and keep the haathi cool.

Sev sabzi was also good for the first time.

Kept working till evening and drove towards Balaghat. The roads went through near Kanha national park so you never know when a big crater may come enough to swallow the whole car. The road conditions were not good between Seoni and Balaghat. Called it for day , stayed at a Dhaba before Balaghat.

never seen it before.
...And sev sabzi too, I suppose it's veg curry then add the sev.

Intial plan was to work in day and travel in night. Later I realised that this way will only end up in covering roads, rather than enjoying the beauty.

So decided to work late evening and goto sleep so that I can wake up early morning and drive till 10 am, find a suitable dhaba for lunch and dinner.

Morning drive on the state highways are awesome.

Since I started early around 6 from balaghat , I decided to use petrol pump near Gondia.
I left my action camera on timelapse mode to capture something till I make use of the petrol pump facilities.
Sunrise from there 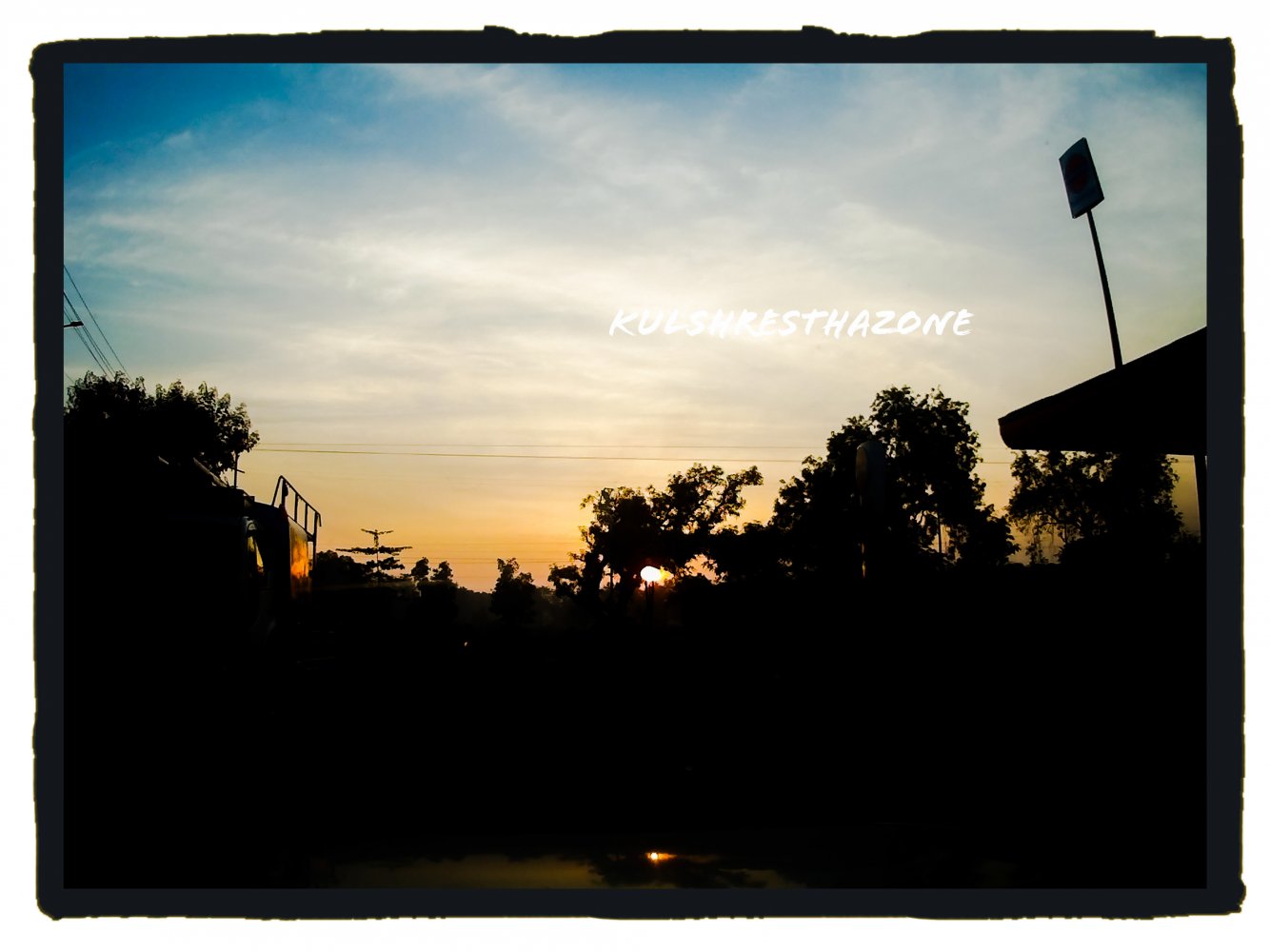 On the way from Gondia to Goregaon. Once you are merged with the 4 lane highway, for Rajnandgaon smooth roads welcome's you. Due to less traffic you can sustain a speed to have a mileage or perfect road to put cruise control at work. Few patches were there where road all of a sudden turned into a single lane road, but tree cover and sun was making them look beautiful. Once I reached Rajnandgaon, plan was to find a dhaba and stay till next morning. So entered the town , enquired for the route. Milkman was sitting there, bought some for myself and found a place for breakfast. Decided to try that, it was okies.

Since it was already 930 and I have to find dhaba for proper lunch, dinner and night stay. As suggested I took the route towards bhanupratappur. Being a iron ore rich area , a lot of truck movement was there, however dhaba's weren't there. Time was running out and I was getting late for office login. So I decided to push towards makri(pronounced as maakdi). There was only a single dhaba between Jagdalpur and Raipur which has been operational through out the time.

Punjabi dhaba , finally I got rid from sev sabzi for a day. A big relief, enjoyed the food there and worked from there , slept there.

This dhaba has been there since 1961, and this is the third generation who has been running it. In next year this will be closed and another is coming up on a land of 3acre land , similar to what we have on Murthal.
To be continued...

That sounds brilliant. Its a dream of mine to do a coast to coast trip. I am relatively new to taking and planning road trips, but, this is one trip I will definitely take. It would be awesome if you could catalogue the route you take, any significant issues faced and places you stopped (for safe overnight parking options). Have a great trip!

When you are parked near to the main road, whole night goes into listening varities of horns and noises. But it became calm post 12 am. It was a lucky day as you have a washroom of the dhaba.

Had a parantha and started to move towards chitrakote. When I started for chitrakote roads were under construction till KesKhal. And from Keshkhal till Bhaupuri road were smooth. Haathi was gliding happily and I was happy to have mileage adjusted for the bad roads.

While I crossed Kanker beautiful Jungle on bothe sides, army personnel were petrolling the Jungle roads. Being curious I tried to understand that should I go forward or should I wait as they reminded me of the kashmir valley. On of them replied it's a mini Kashmir and don't leave the highway rest everything is fine.

I was trying to maintain a good speed as I had to reach chitrakote so that I can find a place to eat and login, however a day without surprise not possible.

When I reached Chitrakote, I was shocked to see no one around, other than few parking owners. I enquired about that, he said that I am too early.

Haathi was parked , I was enjoying the views around me. I loved the fall, as one can't imagine to have a waterfall from a quite river indravati.
This river jumps down from a height of apprxo 100-150 ft, which makes it amazing. Till the edge it is quite and after edge it is something ese.
Being an active airtel user I was expecting it to be with me, but only jio was there. I was excited to share the pictures, then I realised that network is not there and jio doesn't have the valid recharge.

Technology came to rescue, got the hotspot and finally the recharge was successful. Using Jio network I was able to login and start working. A lot of time was wasted and I missed a team meeting .

It became difficult to make them understand why my shared photo reached them before mine login.

There were hundreds of tress, but none int he parking and sun want to burn everything where ever it's rays touches. So I just cover all windows and sat there for work from car. Took few calls and worked till 530 and went out finally to enjoy the waterfall. Eat what you get easily

In the evening I went to the reset maintain by state tourism and there a destination wedding was going on, however I manage to have dinner there. Post dinner I thought of covering some distance before going to sleep so I decided to move forward and stayed at a petrol pump Kotam , in orisa just after last place dhanapuji in Chattisgarh.
Last edited: Dec 11, 2020

Dream Trip !
Dream For Many !
Congrats for Living It !

Woke up early morning, the petrol pump was a scenic location.it was in the mid of rice fields and every field was of different colour.

Road from Jeypore till deoghati were so amazing that at every feet you have decide which wheel should be tortured first and which should be last or sometimes it was like all wheels in a go.

On reaching Jeypore I realised that my horn had stopped working, and in state border area it seemed like you are driving in some UP village. People listen to the horn but never move to give you space. Took out my tools and saw that the wire have aged and it got broke , repaired it in 30 mins.

Once repaired it was working fine, sometimes both horn work sometime only one was working. But it was ok to have something.

On the way to Araku, it was not possible to stop on every corner to click.
Somehow I reached Araku once transferring the responsibility to action camera.
I had breakfast at state tourism premises and found a place to login .

Day6: I slept in car near a petrol pump, though they didn't allowed me to use the went ahead towards borra caves.
However I was looking for washroom and breakfast both.
Found a resort which was in its initial stage.
Had Pongal for breakfast and dal roti for lunch.
Good food but bad people, they asked me to pay online for food later they realised they didn't received the msg so thy asked for cash. No option so have to pay cash , at good morning resort. Post that I started for Borra caves.