Famous Gurudwaras How to Travel there

I am showing some more pics of Panjokra sahib.
Ajayab Ghar / Picture Museum is on First Floor.
Field Views are on back side.

One more Gurdwara is there nearby as Board there mentions at Gurdwara Panjokra Sahib.
BHANO - KHERI 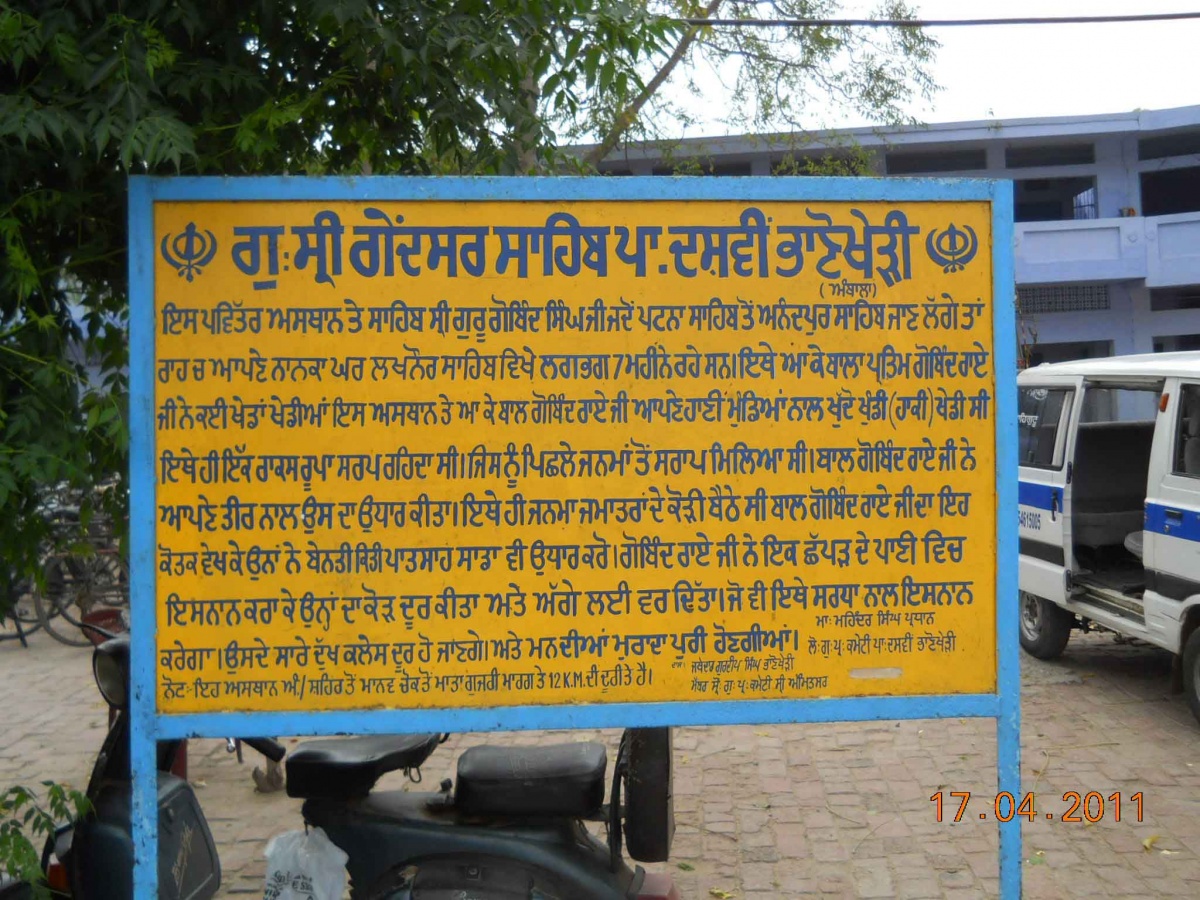 This place is on Ambala to Kaithal Highway
https://maps.google.co.in/maps?client=opera&q=Matheri+Shekhan,+Haryana+to+Gurudwara+Shri+Gendsar+Sahib+Bhanokheri,+Kurukshetra,+Haryana&oe=utf-8&channel=suggest&um=1&ie=UTF-8&hl=en&sa=N&tab=wl

Thanks Tilak ji.
Any News ?
When are You going to Uttrakhand?
Please mention next trip here:
http://www.bcmtouring.com/forum/general-discussions-f21/uttarakhand-floods-whom-donate-t53532-10/

Some Attractions of Gurdwara Panjokra Sahib
1. From Front 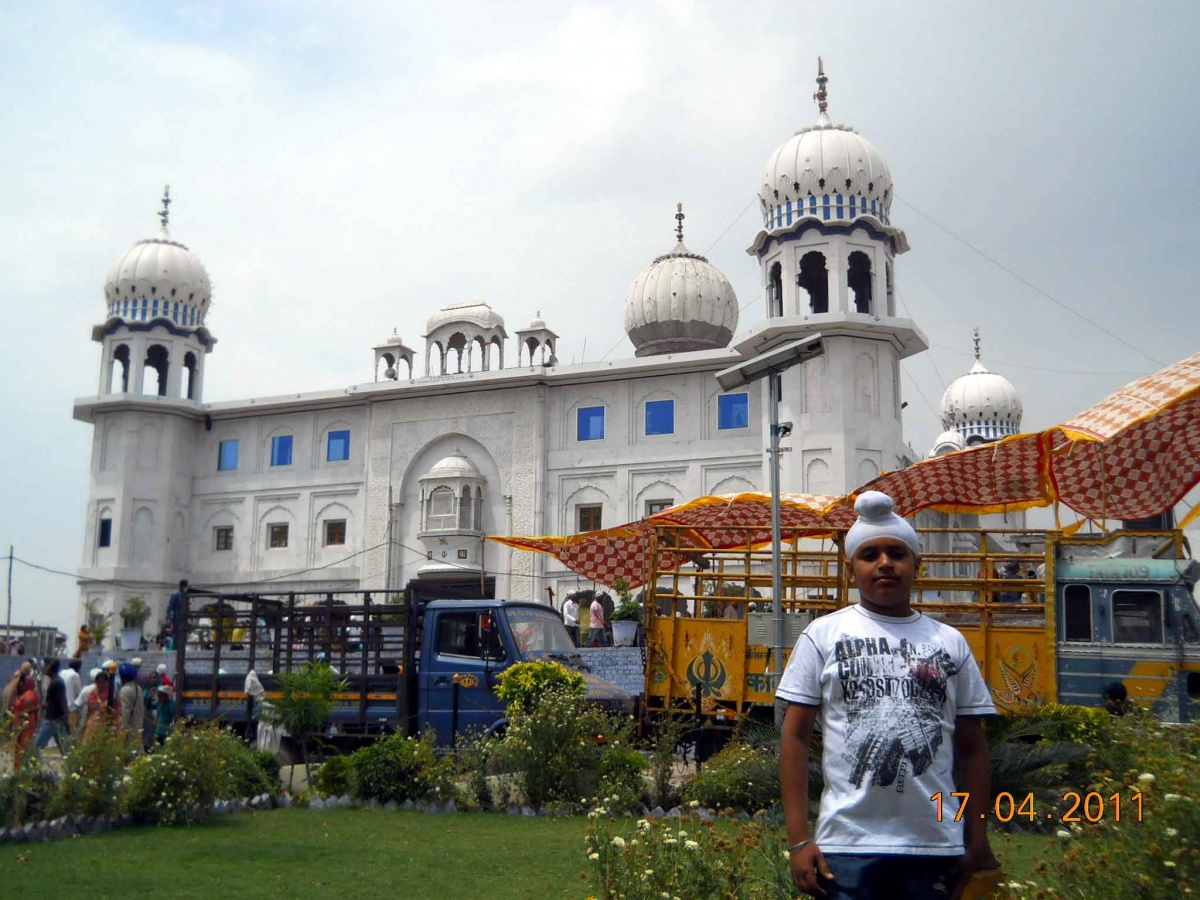 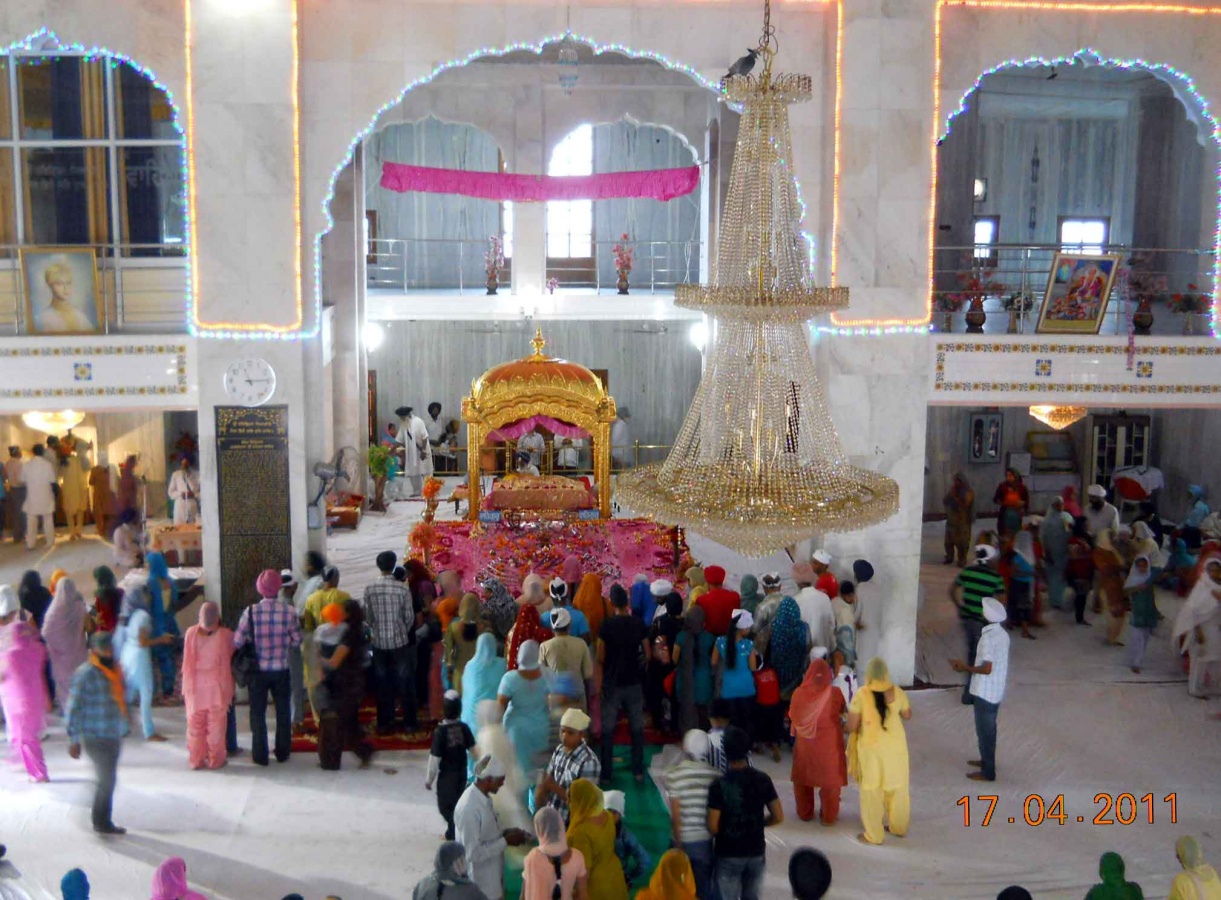 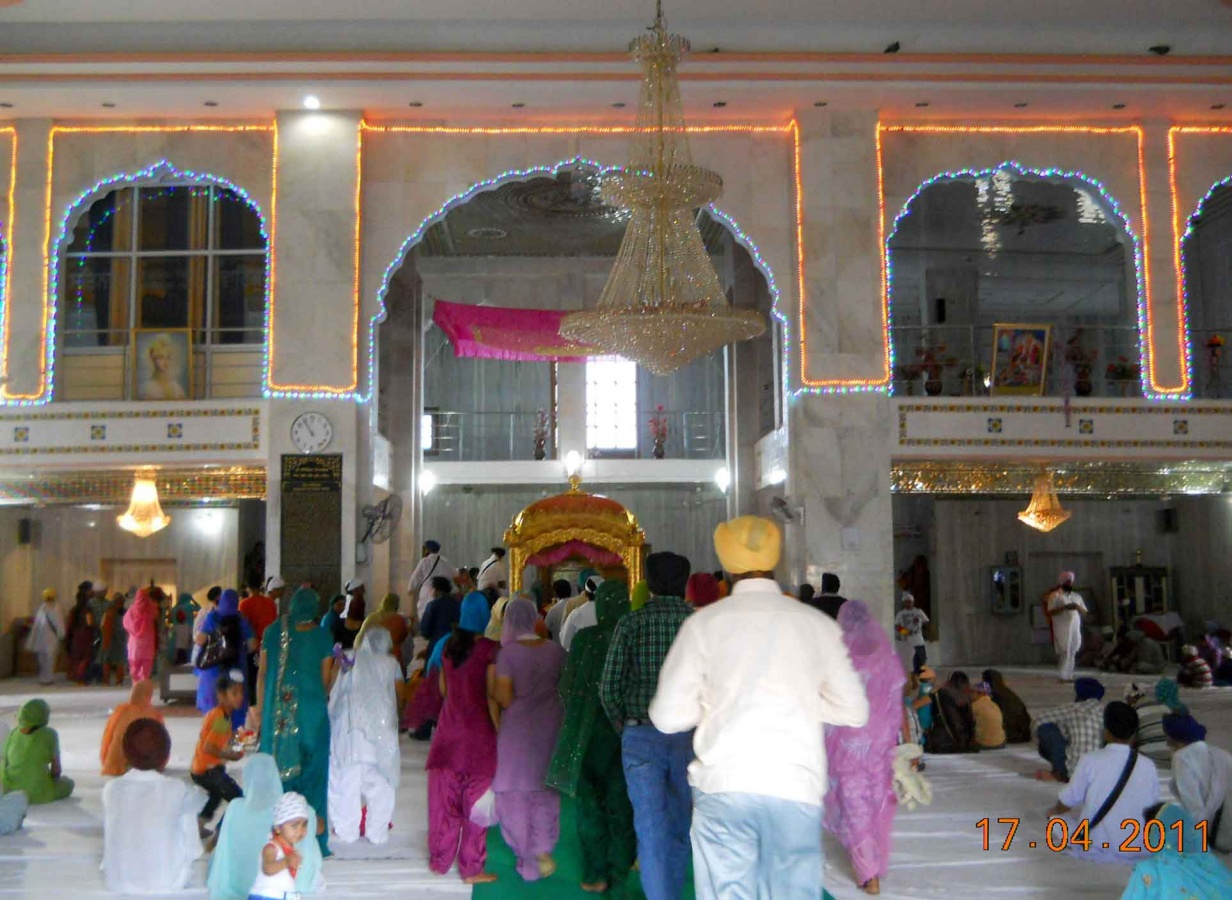 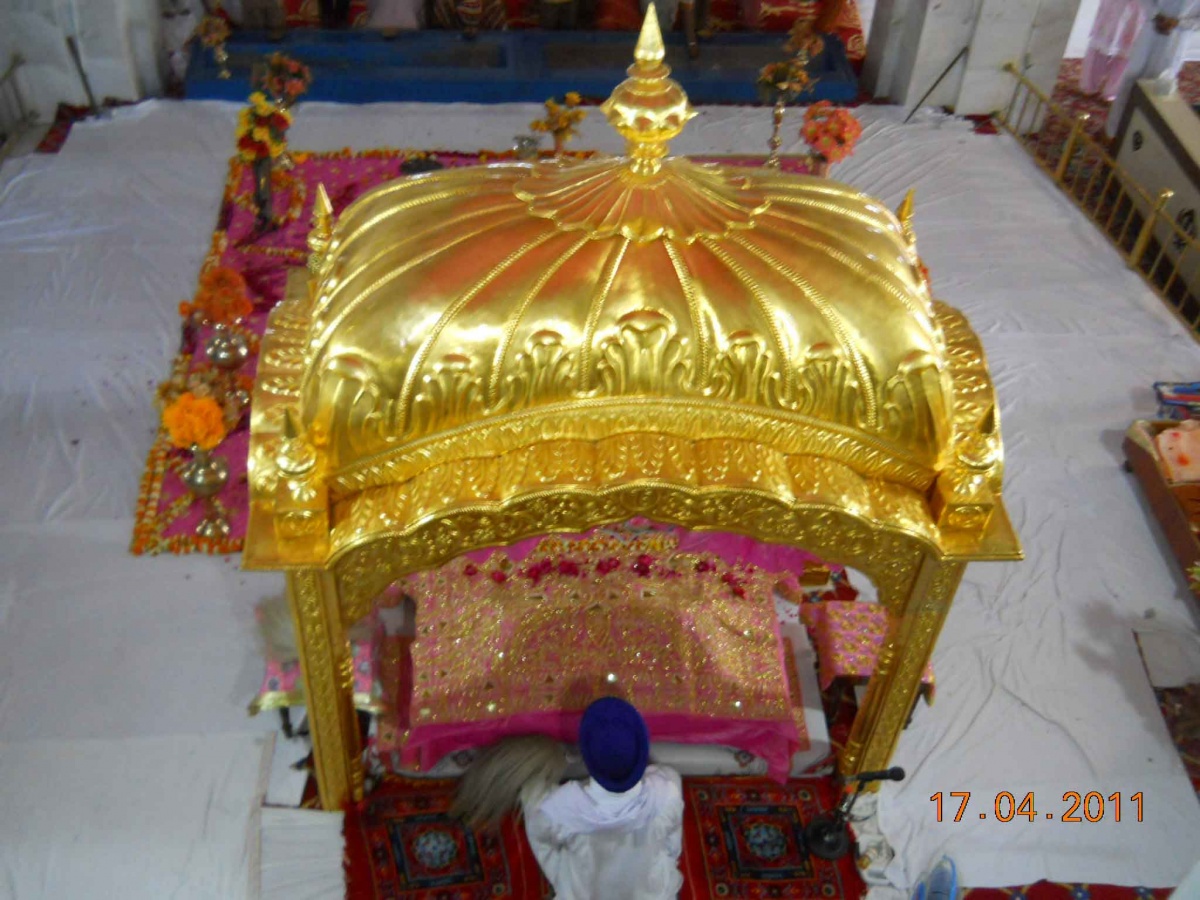 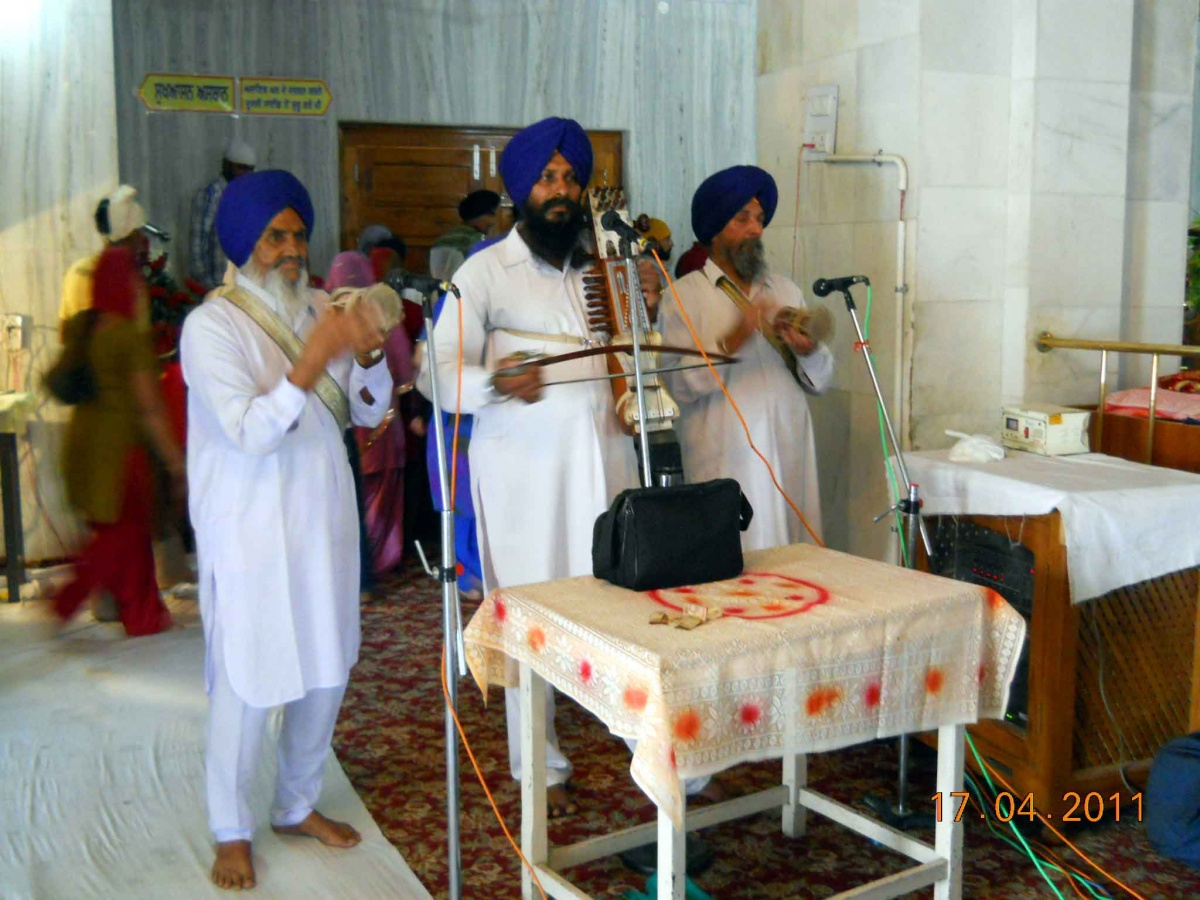 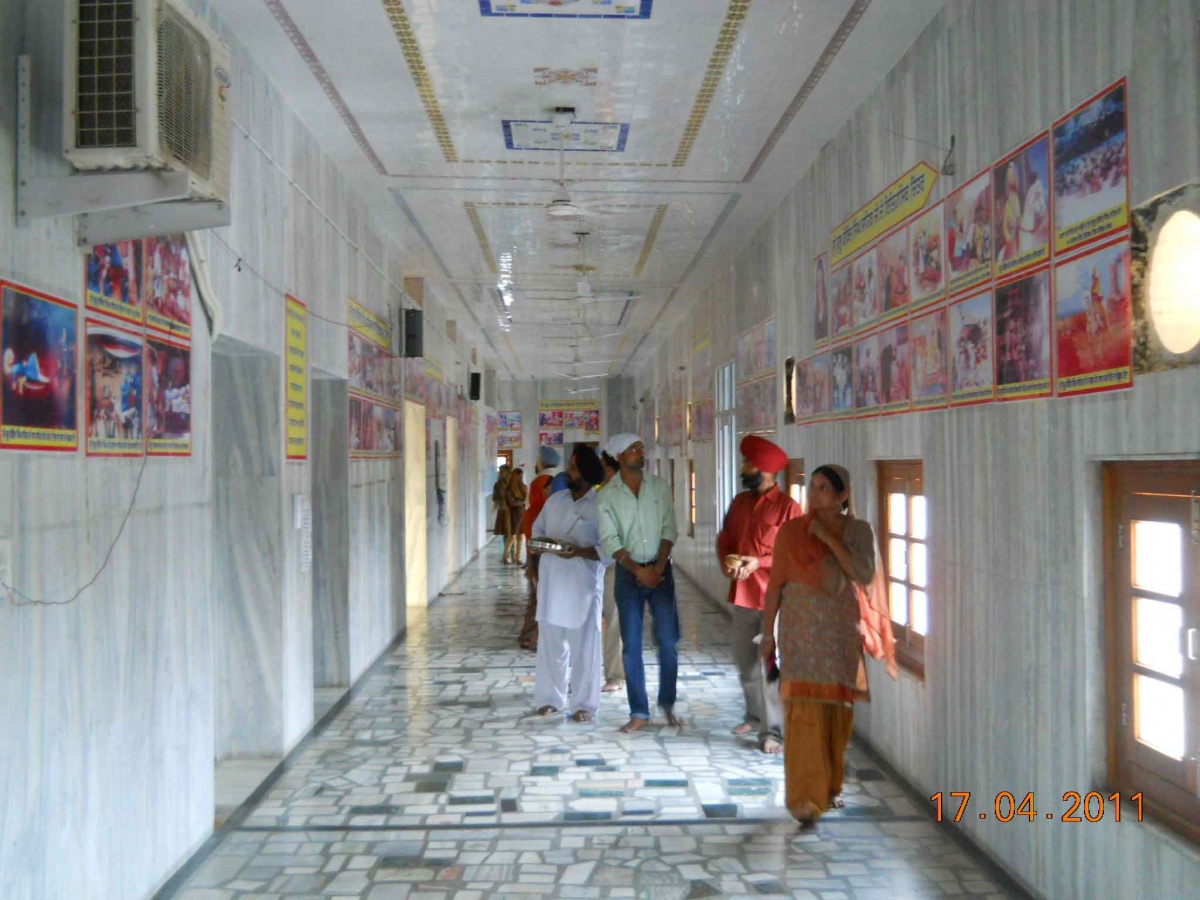 7. Fish, All of them running for some eatables
though not recommended in Saovar / Divine Pool 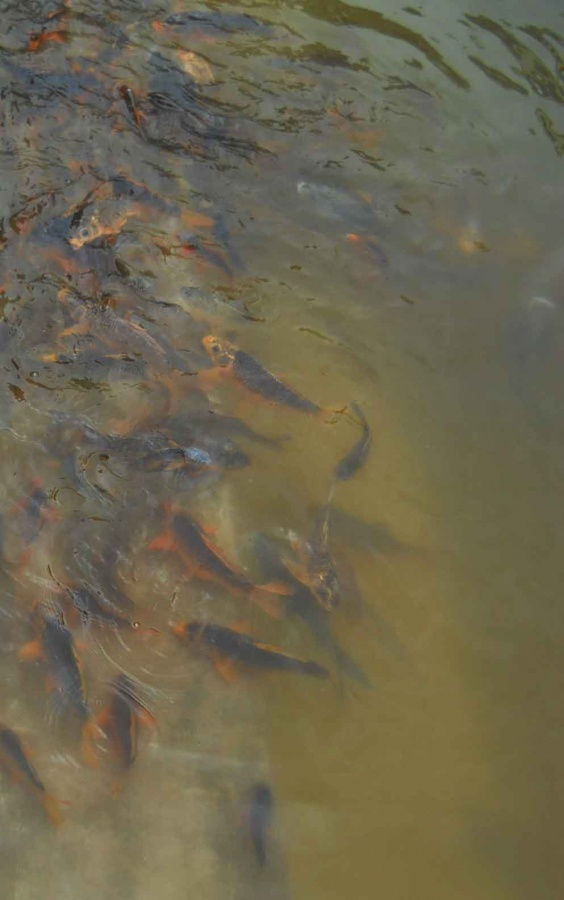 8. Field Views at Back side 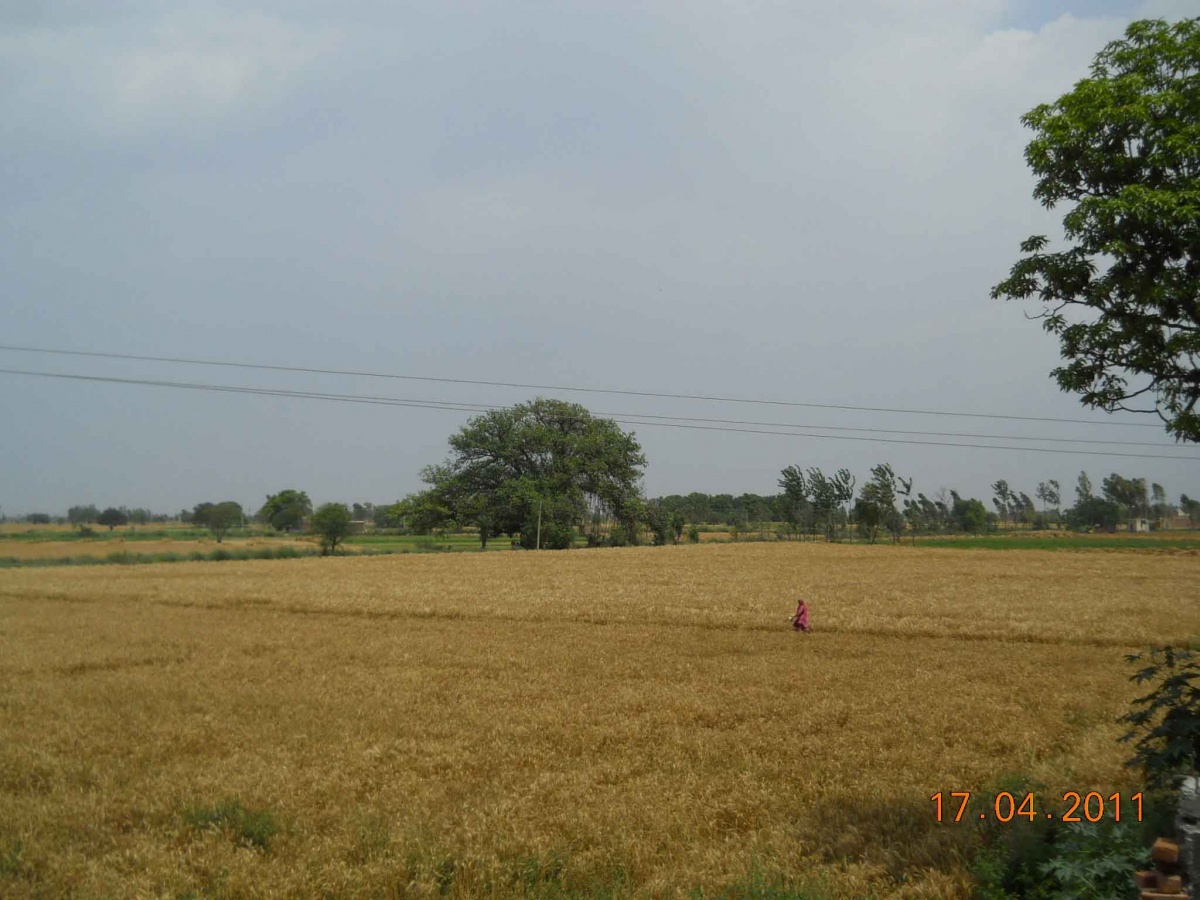 Kiratpur Sahib was founded by the sixth Guru Sri Hargobind Sahib. Here the seventh and eighth Gurus were born and brought up. It was here that Guru Gobind Singh along with his followers received the sacred head of the ninth Guru Sri Tegh Bahadur, brought from Delhi with great devotion and respect by Bhai Jaita in 1675. The particular spot associated with and sanctified by it, is known as Gurudwara Babangarh Sahib. The tenth Guru took the sacred head of his father in a procession to Anandpur Sahib for cremation. The Punjab Government has constructed a pillar here, on which is inscribed the following quotation from Guru Gobind Singh describing the unique martyrdom of Sri Guru Tegh Bahadurji, "The Lord (Guru Tegh Bahadur) protected their paste mark (Tilak) - and the sacred thread. A great deed he enacted in the age of kala (darkness)".

The Gurdwara is situated on the bank of the river Sutlej about 10 km south of Anandpur and about 30 km north of Rupnagar. It is on the Nangal-Rupnagar-Chandigarh road (NH21). The city and its many Gurdwaras are sacred places for the Sikhs as several of the Sikh Gurus visited, were born and lived here. The ashes of several Gurus were immersed in the nearby Sutlej River. Even today many Sikhs come here to spread the ashes of their loved ones in the River.


Kiratpur Sahib is around 319 KMs from Delhi. 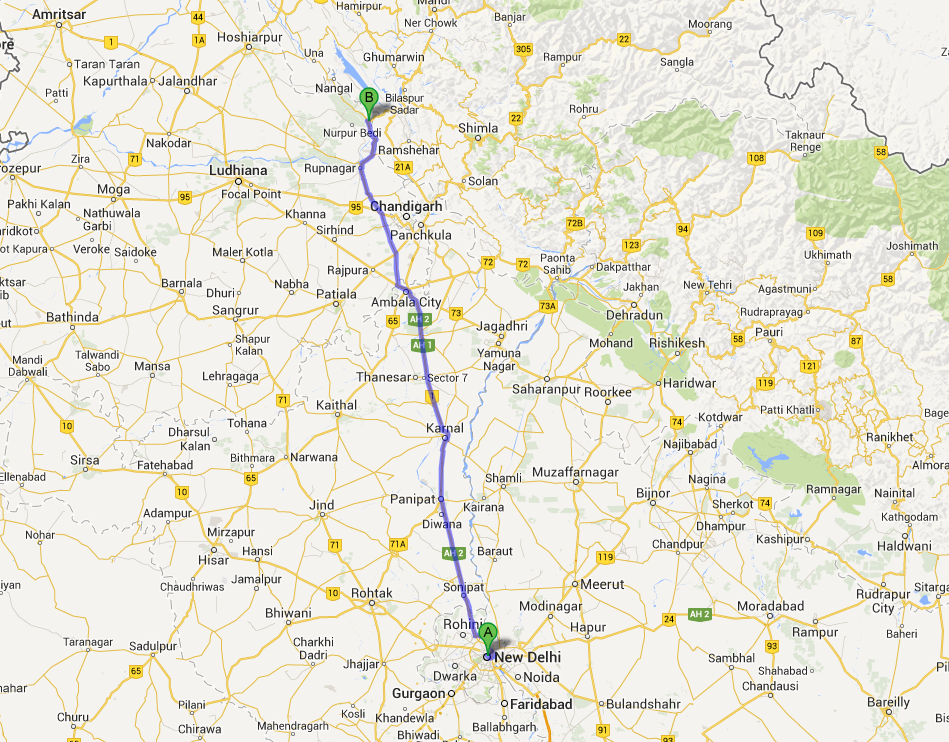 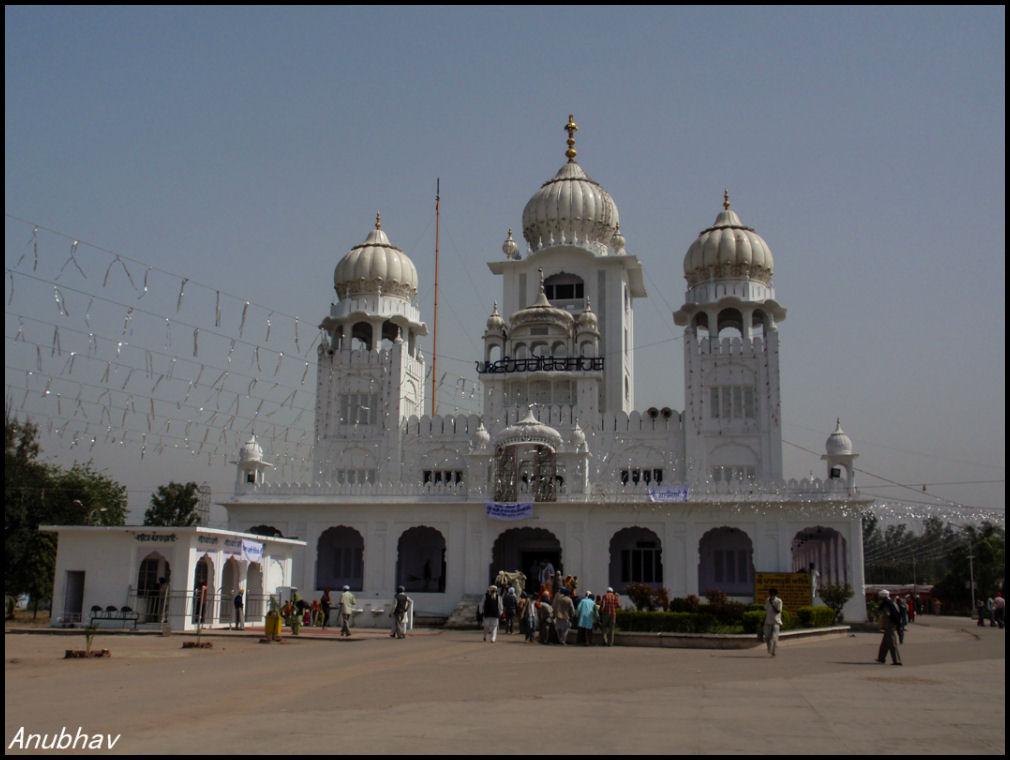 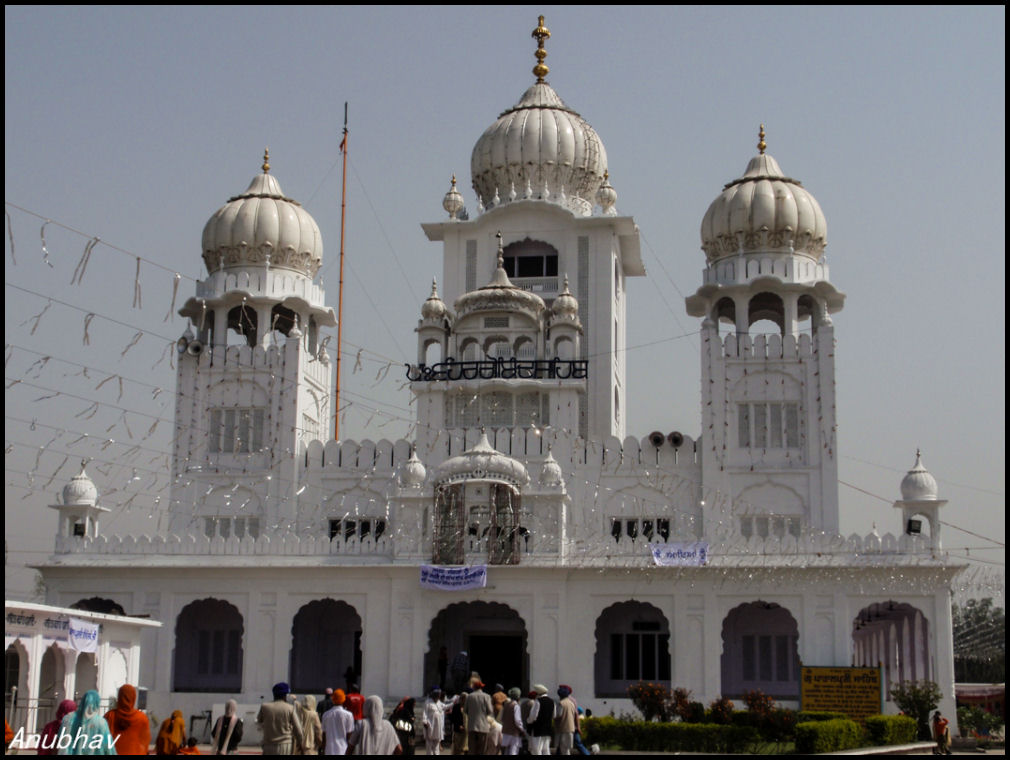 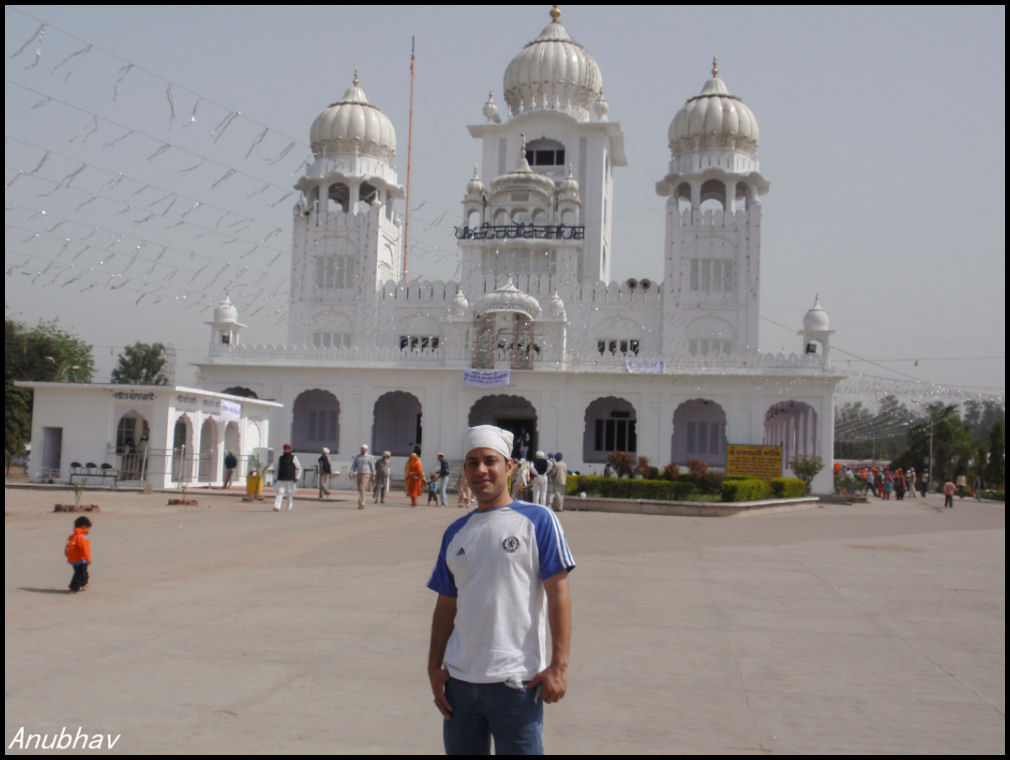 Great Thanks to Both of You
for your Contribution here.


Please contribute more &
All visiting any Gurdwara can contribute here.
If You are not comfortable enough to post info with pics
then please pm me pics & info.
I will post them with Your Name, if You like.

Anandpur Sahib is a city in Rupnagar district (Roper) in the state of Punjab, India. Known as "the holy City of Bliss," it is a holy city of the Sikhs and is one of their most important sacred places, closely linked with their religious traditions and history. It is located on the lower spurs of the Himalayas surrounded by picturesque natural scenery, with the river Sutlej forming a shimmering and shiny blue border on the south west barely four miles away.

Anandpur Sahib was founded in 1665 by the ninth Sikh Guru, Guru Tegh Bahadur when he bought a tract of land. Here on the mound of Makhowal, Guru Tegh Bahadur raised a new habitation. The ground was broken on 19 June 1665, by Baba Gurditta Ji. The new village was named Chakk Nanaki after the Guru's mother, Nanaki. The place later came to be known as Anandpur Sahib.

After the establishment of Shri Anandpur Sahib, Shri Guru Gobind Singh Ji used to hold congregations on this hill. At that time, this hill was 3.0 – 4.50 meters higher than it is now. By the side of this hill there stood another hill known as “Tambu Wali Phari” ~ because a special tent was set up on the day of “Revelation of Khalsa”. This hill does not exist anymore.

On the day of “Revelation of Khalsa” a special congregations was held here. Thousands of Sikhs attended it, one can presume how much was the space around Thakat Shri Kesh Garh Sahib from the fact that all the Sikhs must have seated themselves here at the time of congregations on this hill.


Anandpur Sahib is around 113 Kms from Ambala and 328 KMs from Delhi. 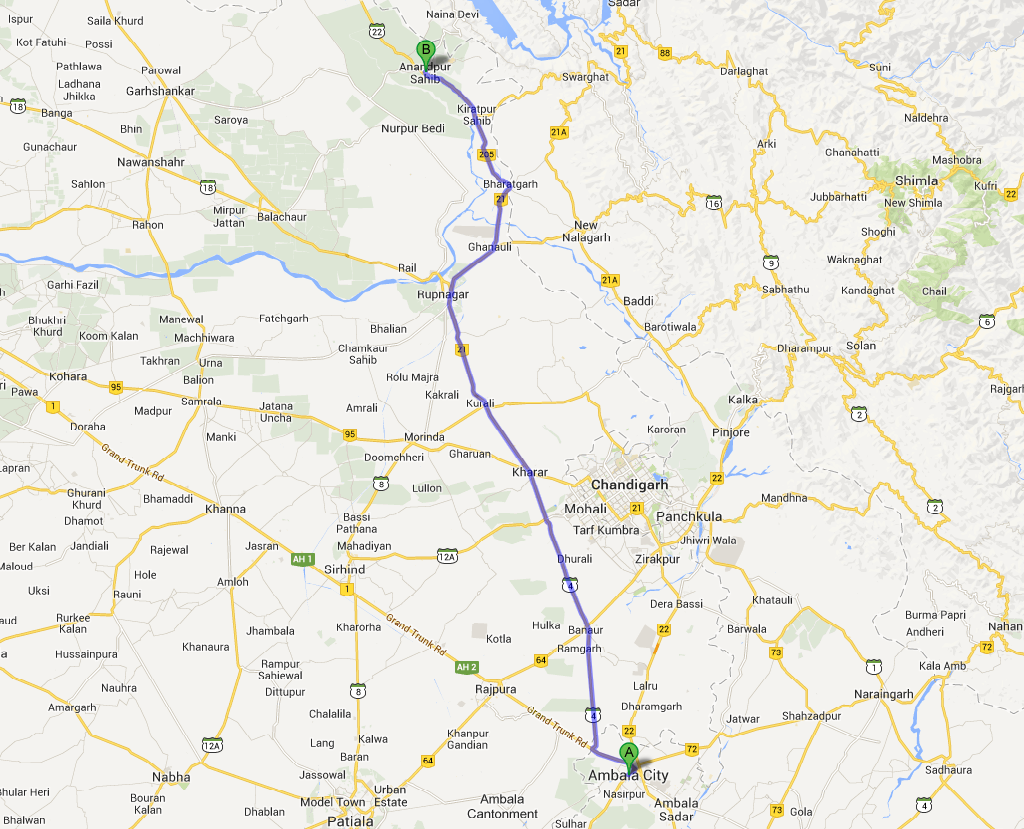 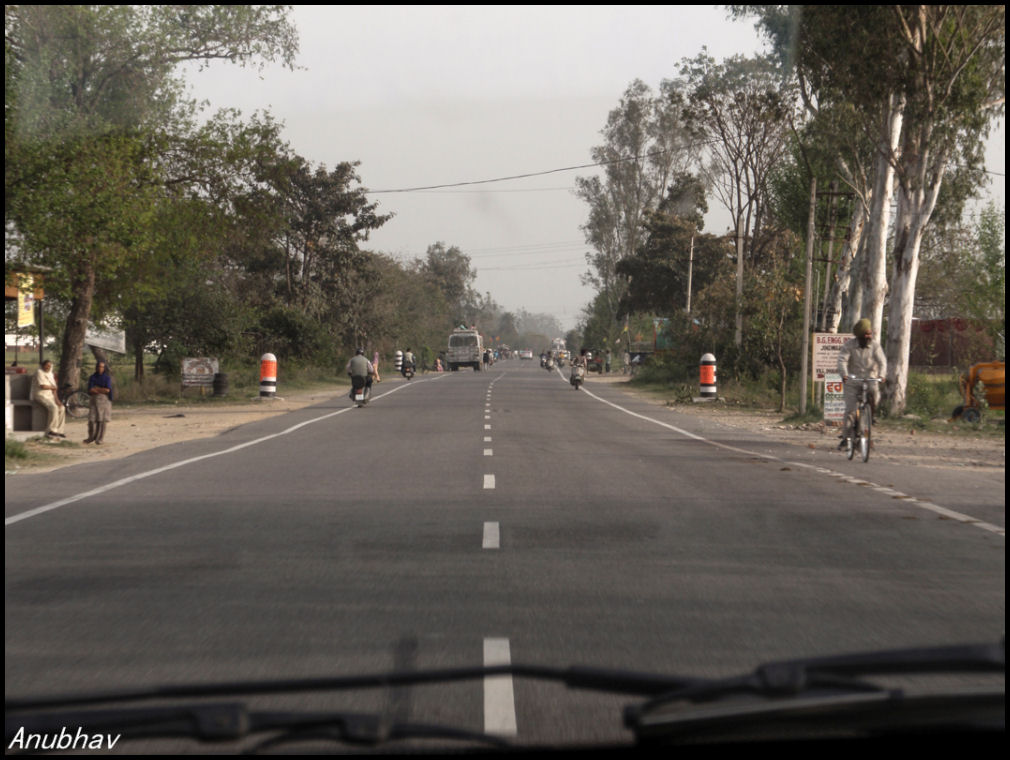 View of Anandpur city from the Gurudwara 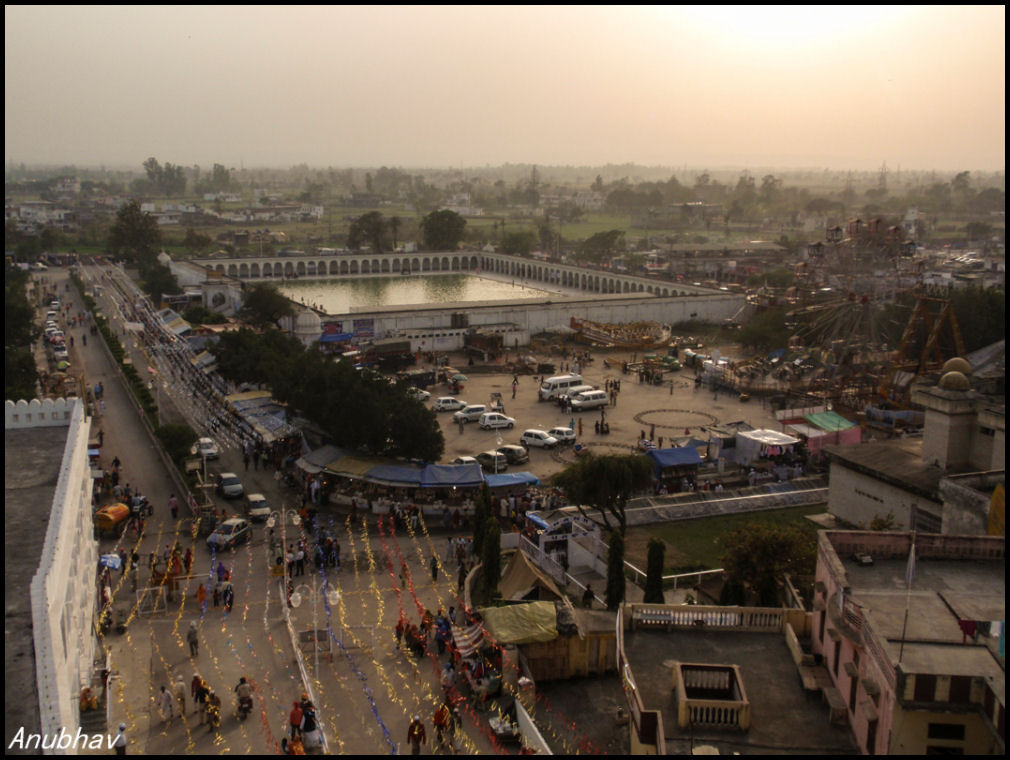 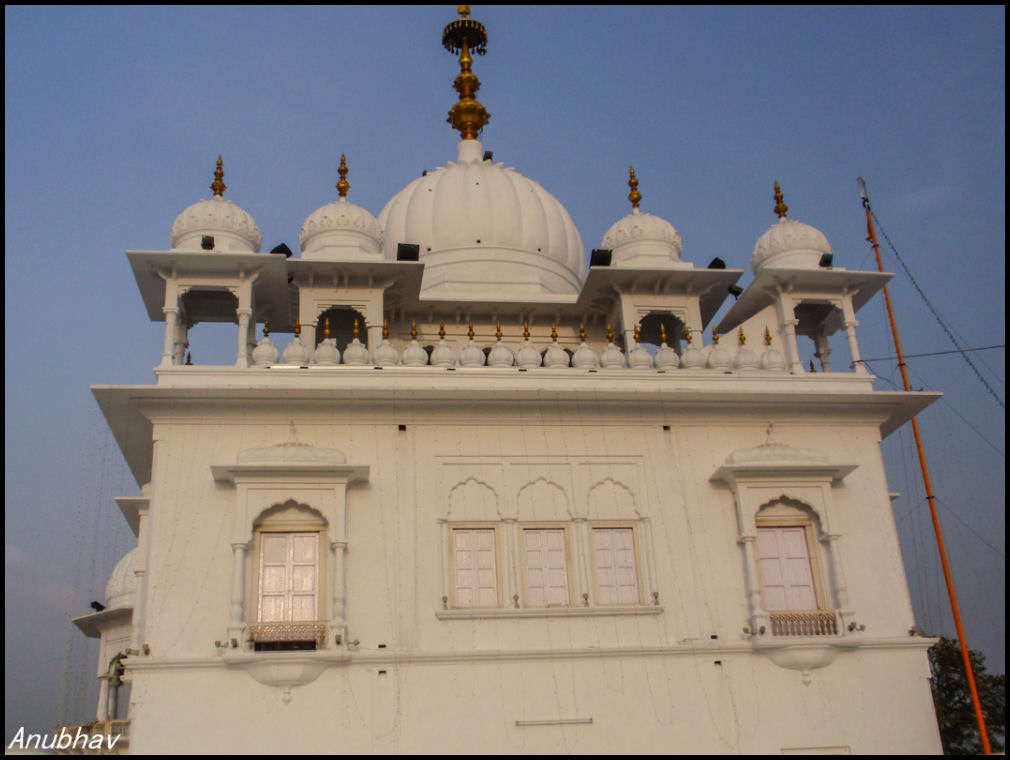 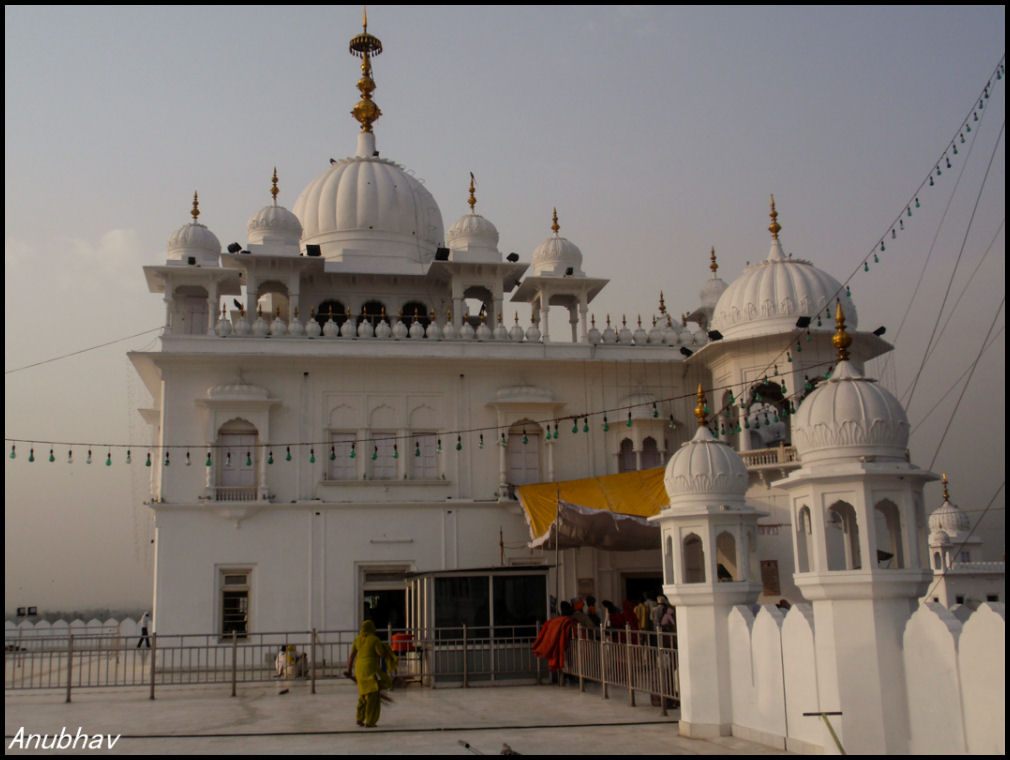 Thanks RK Bharat ji.
If You have Anandpur Sahib Pics & other Gurdwaras,
please show some GEMS here.

TALHAN SAHIB, JALANDHAR
Talhan Sahib is quiet a famous Gurudwara, at least for Jalandharis. Quiet place surrounded by green and yellow mustard fields, freshly laid tar(2months back).Though have visited Gurudwara once, but there is a mela every year ind november-December. Google maps shows many different directions to the gurudwara, but the simplest and proper roads is only one from jalandar-hoshiarpur road. I don't have pics of the gurudwara so will be using the ones available on the net. It is 7kms from Rama Mandi(flyover under construction on entring jalandhar from ludhiana side).

From Rama Mandi while coming from Ludhiana go a little ahead and from the next divider take U-turn and turn left to Hoshiarpur. After crossing ROB a kilometer or so ahead you will see a board showing directions to Gurudwara Talhan Sahib. Take a right and further keep following directions.

THE ENTERANCE, take your vehicle inside, the parking is inside only. PS- sorry for low resolution image 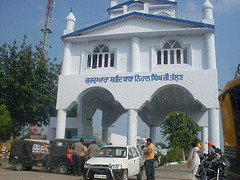 The Main entrance, inside Gurudwara 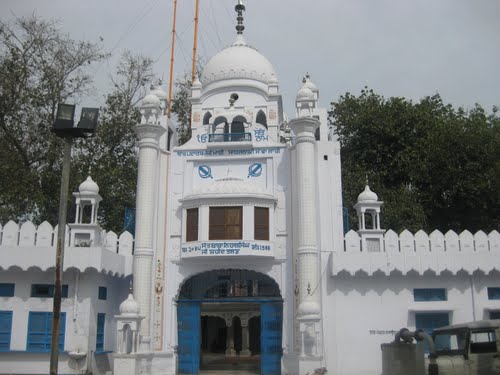 One may see many planes hanging there, as there is a belief that if a person is having problem in getting Visa for foreign (KANEDA for punjabis ) he/she may get Visa by hanging planes here and doing ardaas.
Last edited: Aug 29, 2013
You must log in or register to reply here.
Share:
Facebook Twitter Reddit Pinterest WhatsApp Email
Top