First trip to Garhwal; Harsil and Gangotri in Winter

Second month of 2017 was coming to an end and I hadn’t yet traveled anywhere this year. So something had to be done about it. I needed to fix the mistake and set the tone for rest of the year.

So after a lot of thinking, I zeroed in on Garhwal. Mainly because I hadn’t gone beyond Rishikesh until now and this would be my first trip to Garhwali hills.

Mansi, Mini and Rahul were in on this one and plan was to take Rahul’s Tata Safari Storme for the trip.

Almost everyone thought about Harsil, so we decided to keep that as the destination of the trip. Though nothing was set in stone and even at last minute, we could change the plan.

I didn’t want to do the research this time around, even though I was traveling to a new place. I did ping Tilak Soni, hoping to meet him at Uttarkashi.

Now the question came of planning the initial pickup.

Rahul and Mini live in Gurgaon, Mansi lives in Noida and I live in Mayapuri. Last thing we wanted was to waste time while starting from Delhi. So Mansi and I decided to meet at Taj CCD and Rahul and Mini would pick us up from there, if they managed to leave Gurgaon before the CCD got closed. Otherwise we would travel to their home and begin the journey from there.

With initial plan and idea in place, it was time to start packing.

Mansi and I had decided to meet at Taj CCD, once her office got over. Rahul’s shift would end anytime between 10:30pm and 1:30am; so we weren’t sure when we would begin our journey. Add to that, I wasn’t sure if Taj CCD was closing on time these days (11:30pm) or was remaining open until late at night (1-2am).

I reached Taj CCD at around 8pm and 15mins later, Mansi arrived.

It was time for coffees and explanations. Coffee for us, explanation for the staff; on why I hadn’t visited Taj CCD in such a long time. Thankfully, I learned from them, that they will remain open till around 2am. Around 1:10am, Rahul and Mini arrived and our journey and leg pulling began.

Even though none of us had slept, all of us were charged up for the trip. And bakar session continued until wee hours of the morning.

Initially roads were good and we traveled at a fairly fast speed.

However, once the toll road ended (there is only one toll between Delhi to Gangotri, cost Rs. 75) before Roorkee, traffic snarls began. Crossing Roorkee and then Haridwar took plenty of time (thanks to traffic, plenty of diversions and bad roads) and by the time we reached Rishikesh, it was already 5:30am. We thanked our lucky stars for having started early from Delhi, since today was Maha Shivaratri and later on, traffic would have been even thicker.

Before the beginning of hills, we stopped at a small restaurant for tea and parathas my sister had made for us. After having some much needed nourishment and first break of the trip, we began our journey once again.

Breakfast and lure of hills had energized us quite a bit. And with sun slowly making its presence felt, we began to really enjoy the journey and our next break came after Chamba, for tea and this magnificent view of Bhagirathi. Another hour and a half of driving on good hilly roads and we were at Uttarkashi. Even though it was Feb and there was chill in the air, sun was blazing hot. We kept the windows open and yet, were sweating a little under our light woolens.

At Uttarkashi, we met Tilak Soni and his lovely dogs, Lila and Gabbar.

Over tea we chatted about travel and got advice on what we should see in Harshil Valley and where we should stay. We also came to know Harsil had received snowfall just couple of days back and there was still snow and ice on the road. Mansi in the meantime was busy playing with Gabbar. After spending some quality time, it was time to once again resume our journey.

Harsil was still couple of hours away and we also had to stop for lunch.

The only issue was, pretty much all the places were closed, either due to off-season or because of Maha Shivaratri.

Finally we found a small restaurant at a village and stopped there for food. Only maggi, chowmein and buns were available. So we ordered all three along with tea.

Chowmein and tea were delicious and after filling our stomachs to the brim, we got back inside the Storme and once again continued our journey to Harsil.

Suddenly, Storme came to a screeching halt and then a sharp u turn was taken, since Mansi had forgotten her purse at the restaurant (ok things weren’t that dramatic and we actually made fun of her, before heading back.)

We reached the restaurant and the owner kindly handed back the purse, which he had kept safely, after he spotted it, once we had left.

We thanked him for this and once again, began our journey towards Harsil.

At Maneri Dam, Bhagirathi looked so beautiful, that we just had to stop for photographs. 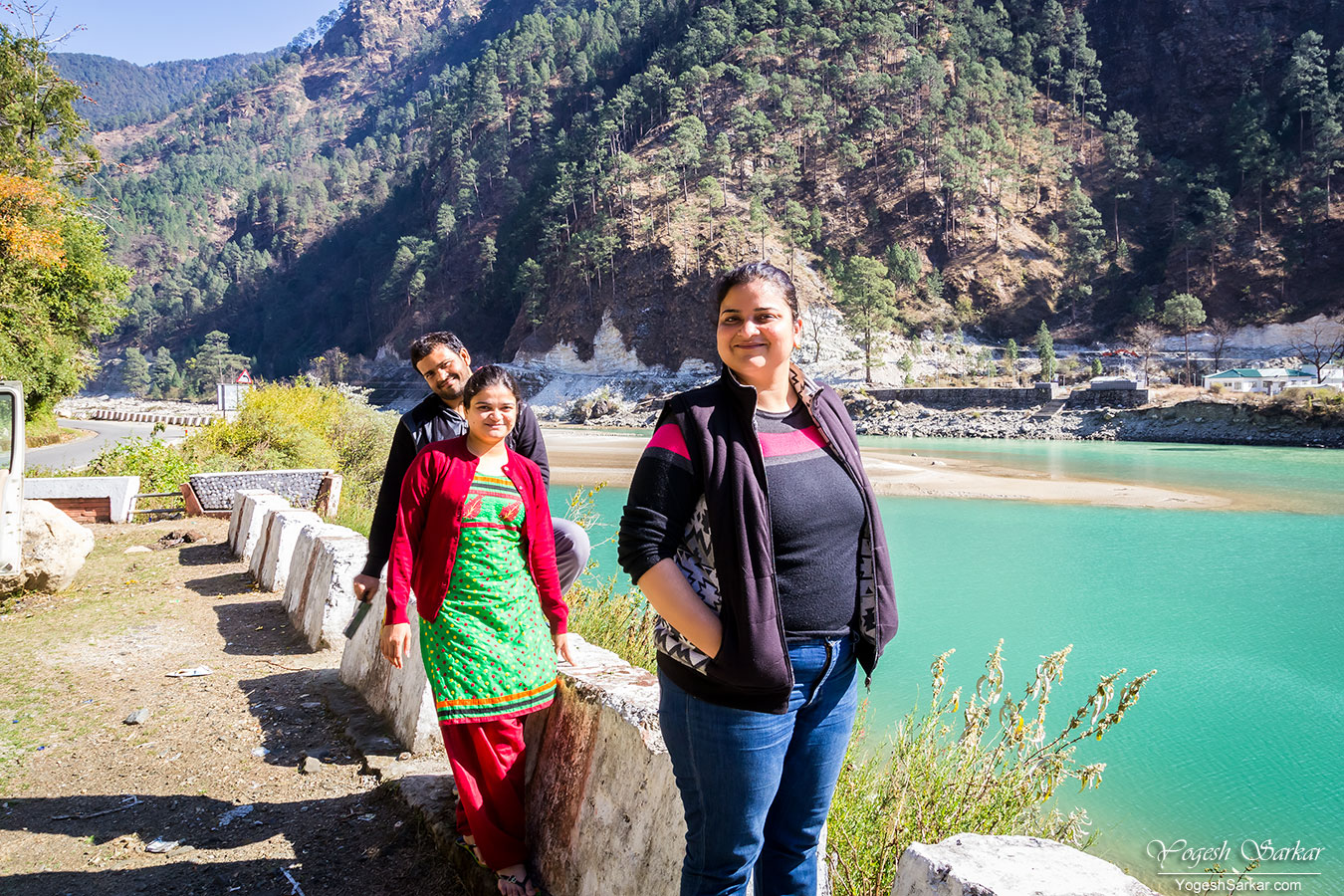 Once we had taken a few photographs, we began our journey again. Now the road had started to deteriorate. With a few landslide zones and road widening work being done, we had to stop at times for a few minutes for the BRO workers to clear the road.

On the plus side, views were fantastic. And the Safari Storme was really comfortable. Slowly snowline got nearer and nearer, as we gained altitude and entered Harshil Valley.

There was good amount of snow, though thankfully road was mostly clean except a few section where snow and black ice could be found.

With temperature and sun going down, our target was to reach Harsil as soon as possible and find accommodation. Since as per Tilak bhai, only GMVN Guest House (Garhwal Mandal Vikas Nigam) was open in Harsil and beyond that at Dharali, no accommodation or food was available.

We reached Harsil at around 5pm and started looking for GMVN. Only, we couldn’t find it. Turns out, we had to park the car in the parking lot in the middle of town and then walk to GMVN Tourist Rest House, situated couple of hundred meters away.

This was the first time I had seen a government tourism rest house, located so far away from the road.

Mansi and Mini went to check out the guest house, while Rahul and I enquired from the locals about other guest houses. Turns out, everything else was closed.

Mansi and Mini returned after a while, and told us, GMVN guest house was closed as well.

There was no way; they had spent so much time there, if the guest house was closed. However, we decided to play along and as we got ready to get inside the Storme, they told us, they were fooling us and they had actually booked couple of rooms.

We picked up our bags and walked to the GMVN TRH. The walk itself felt like a walk back to past, with old houses and path along the way. It seemed, not much had changed in Harsil in past few decades, barring the army cantonment surrounding the town.

For Rs. 1650 + taxes per room, it seemed like a poor deal. While it might have been a good place once upon a time. Now, the Harsil GMVN TRH wasn’t that great. Views for the most part were blocked and the rooms itself weren’t that great (no heaters either). To sum it up, I found it really surprising, that a government tourism hotel could be located at such a non-scenic location.

Anyways, we ordered pakodas and tea and then rested a while.

Harsil had been a disappointment for most of us. While the valley itself was beautiful, Harsil was situated in fairly narrow part of it and wasn’t as scenic as one would have hoped it to be.

After an okish dinner, I tried to shoot a few photographs in the backyard of the guest house, since night sky was really clear and stars beautifully visible. However, I had to wrap up the shoot soon, since staff was in a hurry to retire to their quarter and backyard door had to be locked before that.

We were all fairly tired, yet we chatted till late in the night and then retired to our rooms and slept like logs.

Nice its great to know that you went un-prepared for this, the fun is more when you just go and then see what has to be done. Good one YS Boss !!!!

First Pic is just awesome. Eagerly waiting for next part.

@SHEKHAR 257 and @rameshtahlan, thank you very much.