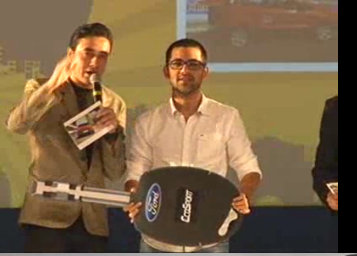 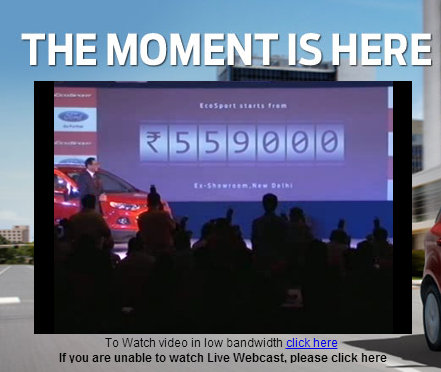 one life live it!

i can already see roads flooded with em...! very aggressive strategy by ford... way to go!


Ford is working hard to give the upcoming EcoSport a very aggressive starting price by heavily localising the car to lower costs.
The expected price for the base petrol variant will be in the Rs 5 lakh bracket.
.
.
The carmaker will start bookings for the EcoSport by the end of March, with deliveries starting in May or June.

Autocar India predicted it accurately for a launch in June at a very attractive 5lakh "bracket"!

Hi all,
you can check this link to know the price of EcoSport in your respective cities: http://ford.to/16yTFxm

Ford has launched its much awaited mini-SUV EcoSport at a mind-boggling base price of Rs. 5.59 lakhs. Read the full article here:
Ford's EcoSport launched at an aggressive Rs 5.59 lakh | News | Autocar India

Its a great price for the kind/type of product Ford Ecosport is. Its a decently powerful hatchback with good ground clearance offering benefits of a compact SUV while comes without intimidating size. Probably the perfect car for a small/nuclear urban family that loves to head out every other weekend.

SachinOnTop said:
Now after doing a short TD myself, I'd say that I'm half impressed.
TD a diesel top end model yesterday evening for 8-10 minutes.

The first and the most irritating thing I noticed in TDCi Titanium+ (the diesel top model) while driving that the deadpedal/footrest is of no use!
The clutch pedal is hanging so awkwardly that I was not able to put my normal leather shoe (quite narrow shaped) on the deadpedal. Clutch pedal was interfering with a smooth movement of my feet in that narrow space.

Prices will be announced today at the official launch at 12:30PM.
Click to expand...

PLEASE GIVE ADDITIONAL INFORMATION REGARDING
1. DRIVING EXPERIENCE- HANDLING, RIDE, and dynamics
2. overall presence as per your experience
3. how effective was the AC

anupkrverma said:
PLEASE GIVE ADDITIONAL INFORMATION REGARDING
1. DRIVING EXPERIENCE- HANDLING, RIDE, and dynamics
2. overall presence as per your experience
3. how effective was the AC
Click to expand...

Anup,
Mine was a miniscule TD at a dealership close to my office. It didn't lasted even for 10 minutes! It was just a 2KM straight stretch covered to & fro in evening office rush.
Therefore, I can't comment anything over handling & ride.
If you can consider 2 swift left U-turns, "dynamics" are pretty good. There was very less body roll in comparison to my WagonR!

Since tyre size of ES is phenomenally bigger than both of my cars, they took the rough patch of roads and potholes with aplomb. Nothing more on these aspects.


WRT overall (road?) presence; IMO, it looks better than other hatchbacks. But while rubbing shoulders with any true SUV on a congested road, it looks puny!
Well, the usual novelty factor will keep you smiling & heads turning for couple of months.

AC was okay. Since there are no dedicated vents for rear seats, I feel that it might take some time to cool the entire cabin. The blower of Auto-AC in top diesel model was very noisy at higher speeds. It was almost at par with the one in my WagonR!
R

Finally, the day of reckoning for Duster has arrived. Renault guys must be in their war-room now. Ditto for some other manufacturers.

Reading reviews of various experts on different forums.
The main drawback I felt is that rear seats can accomodate two persons only & boot space is less.
Ford is providing much anticipated 1 L engine option in Titanium variant only costing nearly 8 Lacs.
Otherwise featurewise Ecosport is winner.
You must log in or register to reply here.
Share:
Facebook Twitter Reddit Pinterest WhatsApp Email
Top