mousourik said:
Sorry, but can't resist it. Jaipur to Bangalore is not connected in the map above. Will there be another twist in the end? (Or is it because the limit in google map was reached?)
Click to expand...

Nope, there is no surprise after Jaipur. I flew back to Bangalore.

@preetdhar, I rode on the highway which you mentioned in the post, and captured the video. Here is the link. http://instagr.am/p/CJtSAiynaiV/
P

Day 2 :
Seoni (MP) to Varanasi (UP).
The alarm rang at sharp 5:15 and obviously on a chilled winter morning, there was none to serve us tea. So we moved forward. I had never traveled to this part of MP. There aren’t too many videos about this region on youtube either. I was expecting it to be dry, under developed, horrible roads with very less food joints. Most of my assumptions came true as the day past, but the beauty of the region was quite surprising. The jungles which were scaring us the night before were now pleasing to our eyes. We were travelling during covid months so there were hardly any public transportation plying on these roads. Trucks were also very limited. I must say the roads are none less than expressways. Only they are not access controlled. Somewhere near Lakhnadon, we stopped for a morning tea. We asked the dhaba guy if we can use the washroom, to which he replied “dahine / baye chale jao”. I could not really get it. Later he explained it meant khet mein J. I found it quite rude, thinking why wouldn’t a dhaba guy allow us to use the washroom. After all these facilities are intended to be used by travelers, right. Nevertheless, had our tea and left for wherever we could find a washroom. We were carrying a sack full of snacks and food….literally. So we decided to skip breakfast stop and have it on the go. For next 100kms we stopped at 4 to 5 dhaba and all of them had the same response, “dahine / baye chale jao”. I was literally furious. It was only after carefully observing the next few dhaba did I realize that these guys have not built any washroom. I mean it, none of them had any washroom and to top it up, water is really scarce in almost all the dhabas.
Anyways, we kept driving straight till Varanasi. By 2:30 we reached Varanasi, booked a hotel and finally crashed ourselves to a bed in last 2 days. 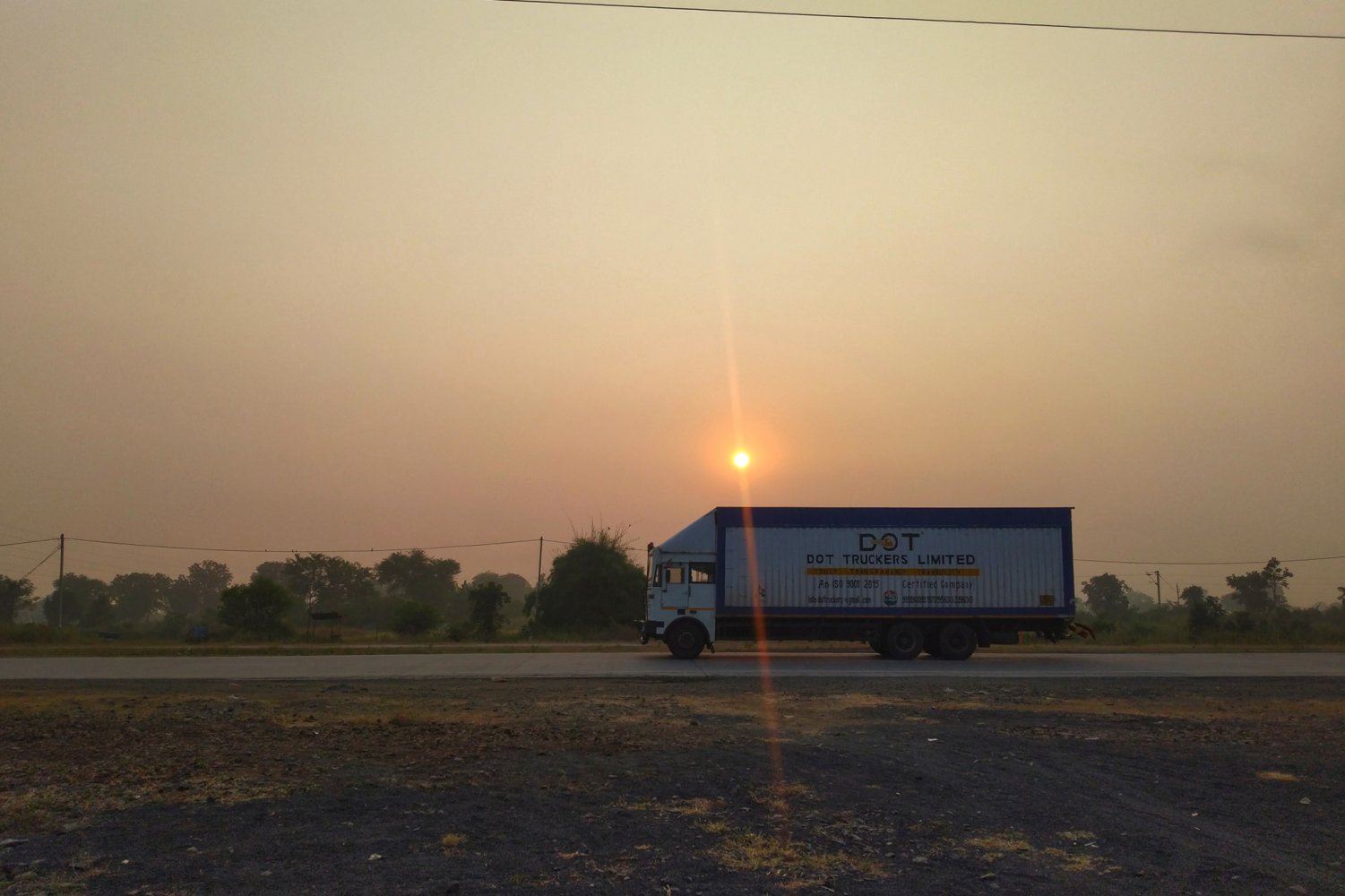 Varanasi : Day 2 (second half)
Our plan for the rest of the day was to freshen up and take a tour of the ghats, evening arti, lassi, kachori, jalebi and BHU. I have been to Varanasi way back in the 90s. So to see a completely different Varanasi, most importantly neat and clean ghats was highly impressive. I must say Varanasi is one such city where the moment you enter the city, you can sense the vibe of the city. People love their ‘me time’. The entire city is full of tea stalls and it appears everyone loves tea. A long discussion of group of aged or nearing retirement folks over tea is something very common. Youngsters’ chit chatting over samosa / jalebi / kachori. Everyone talks in a very formal way and there is a melody in their tone. Typical of this region, I guess. There are shops which sell only Lassi. The cost of living (especially coming from Bangalore) was damn cheap.
So after a brisk walk on the ghats we deiced to hire a boat for the evening arti (Dashashwamedh ghat) from the river. Being covid days we were told that the arti does not happen in its full glory. But a priest or two do the daily rituals. The tourist rush as well was I guess less than usual. So after arti we decided to drop at Dashashwamedh ghat and walk towards Assi ghat (where our hotel was). If there is one trademark for Varanasi that everyone should try, that has to be Lassi. The most authentic it can get. No unnecessary flavors or colors. Just simple lassi in its true form. 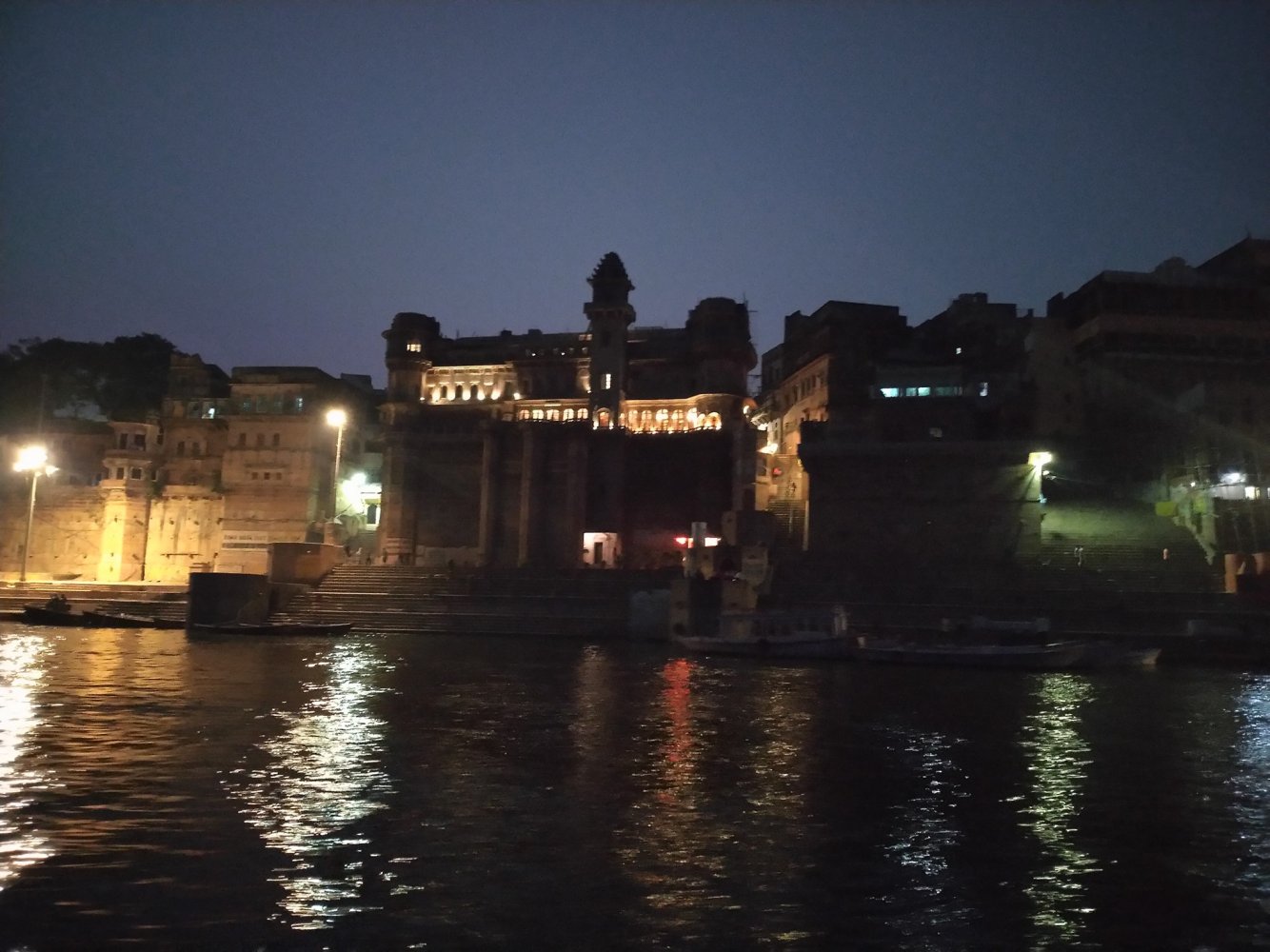 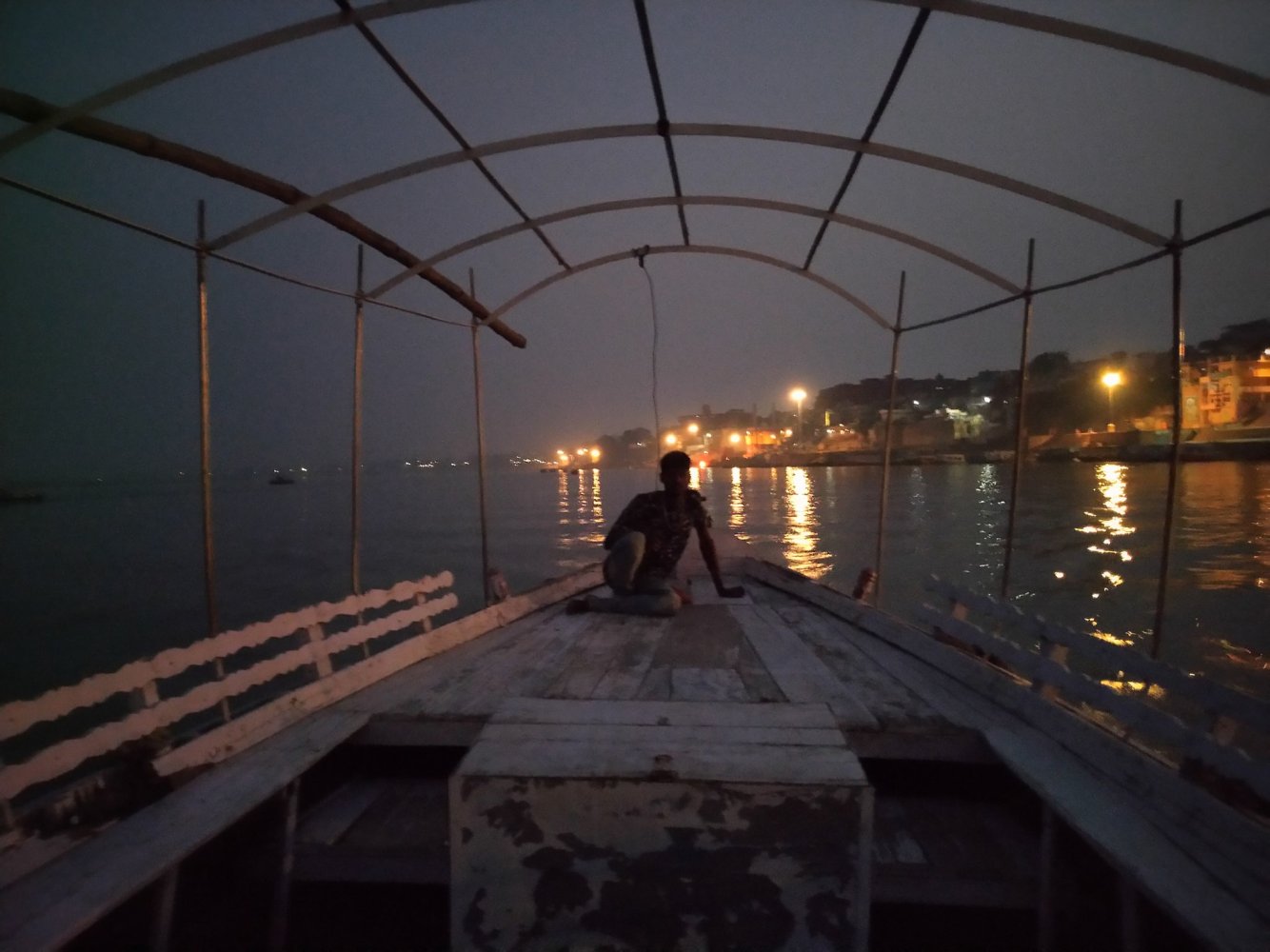 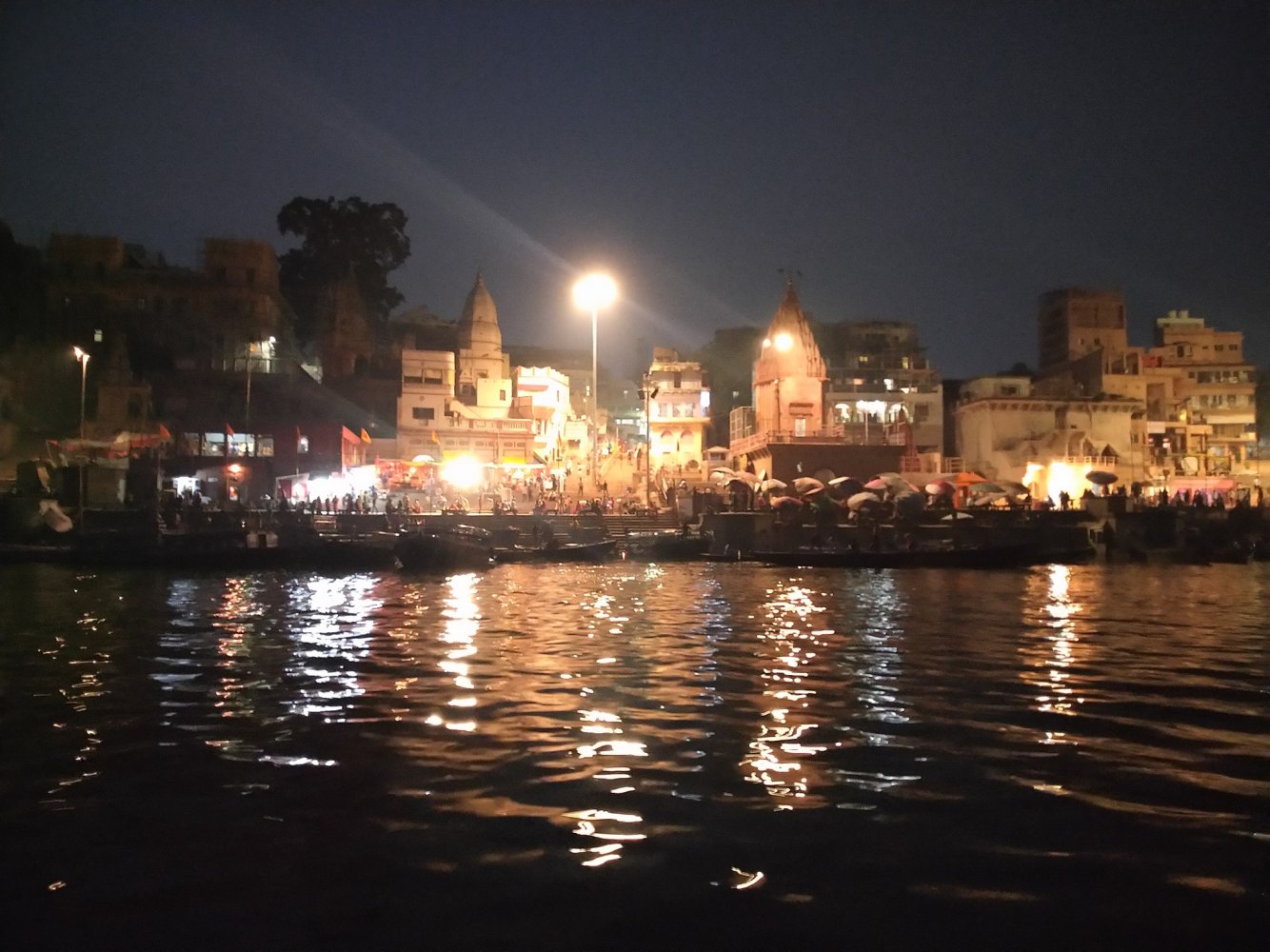 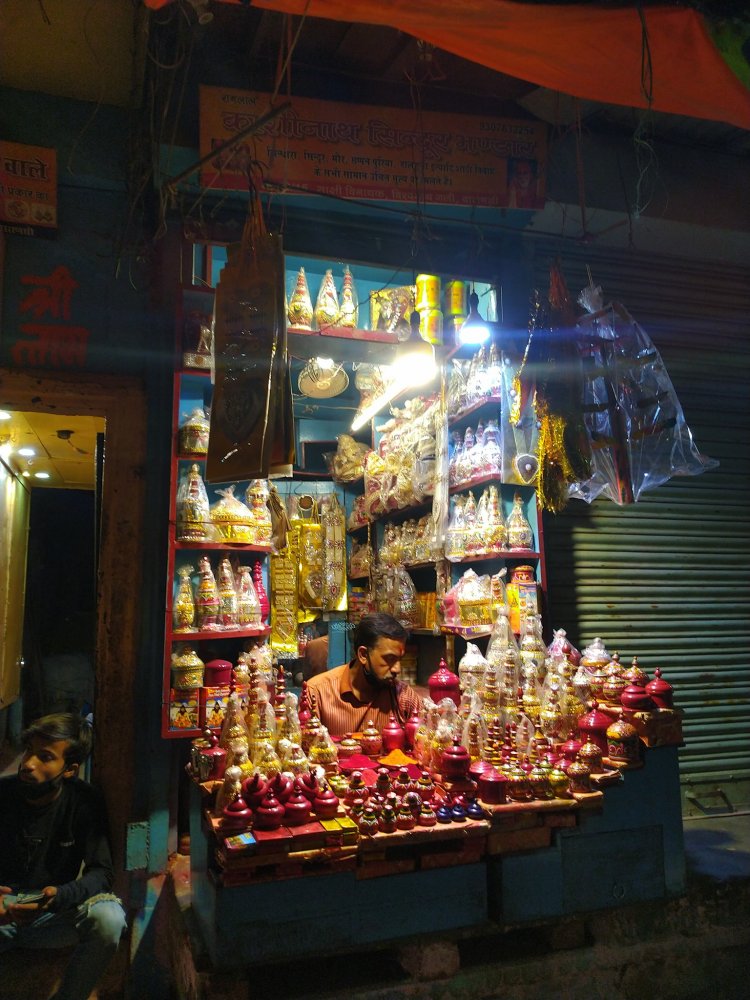 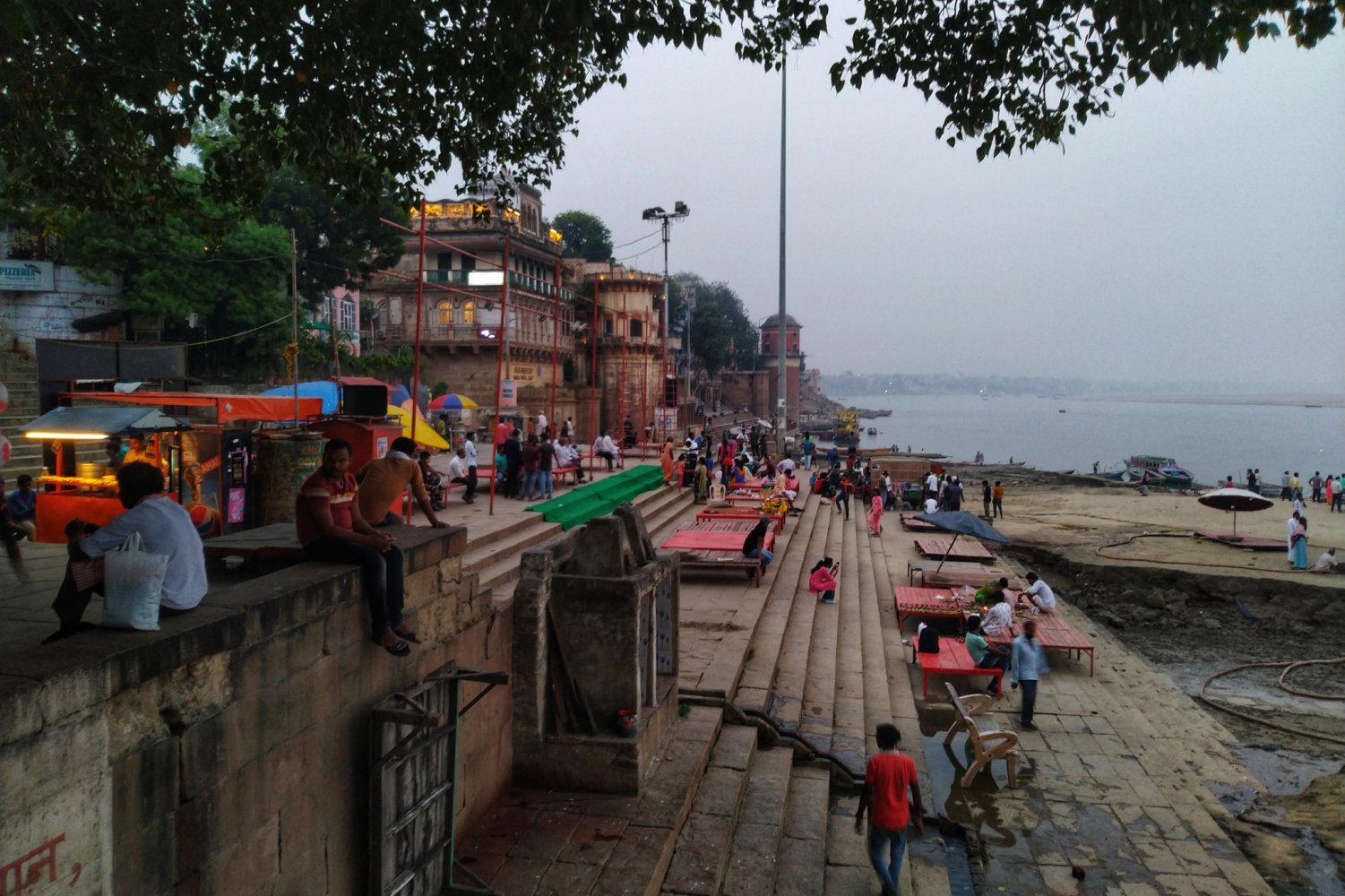 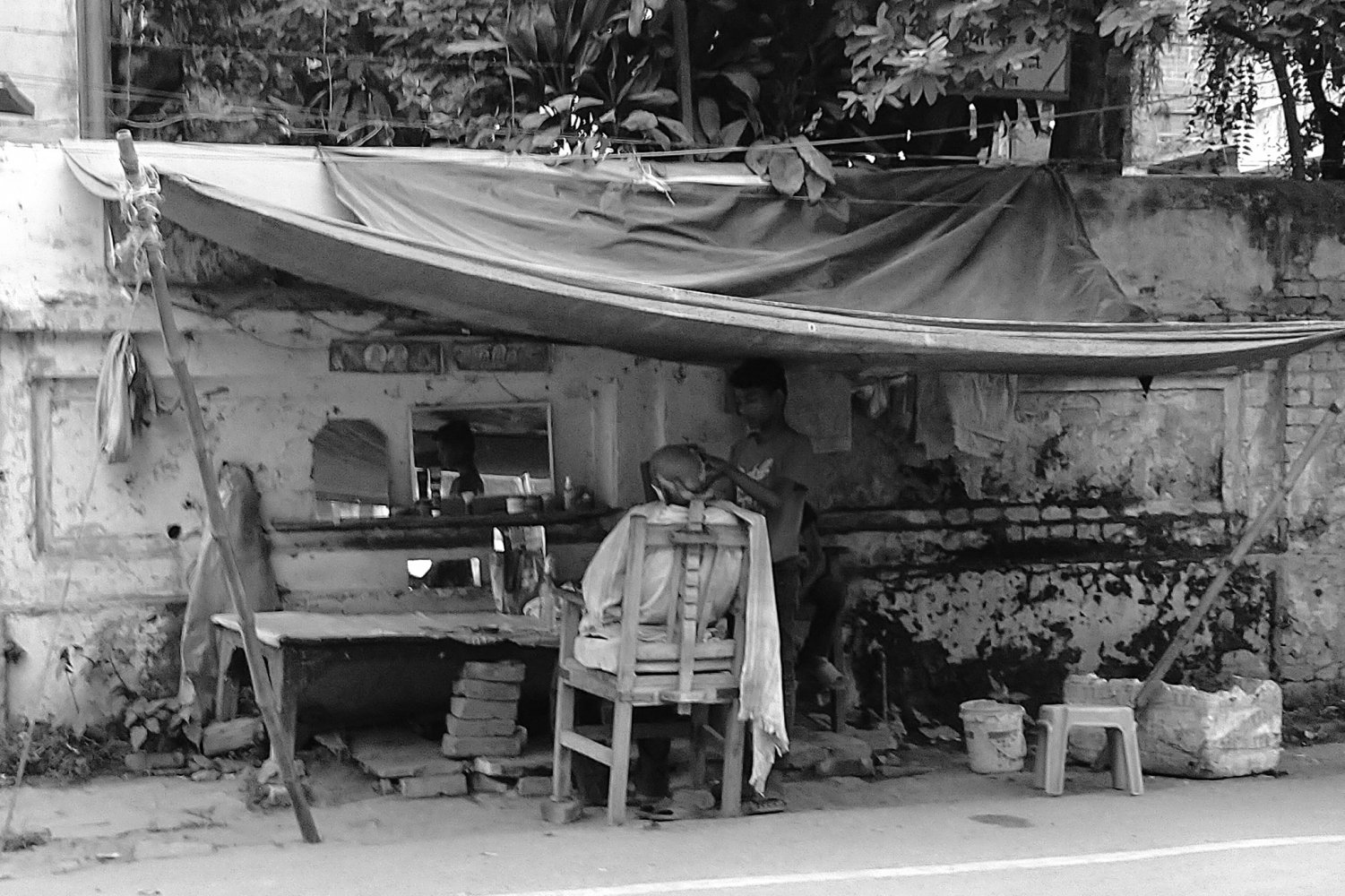 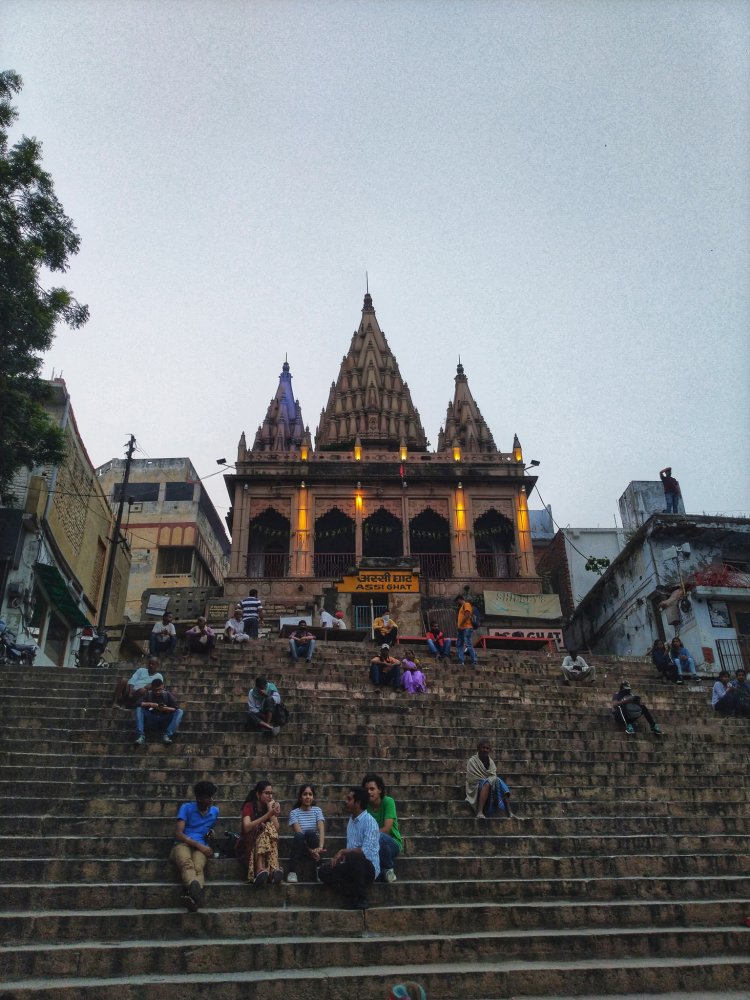 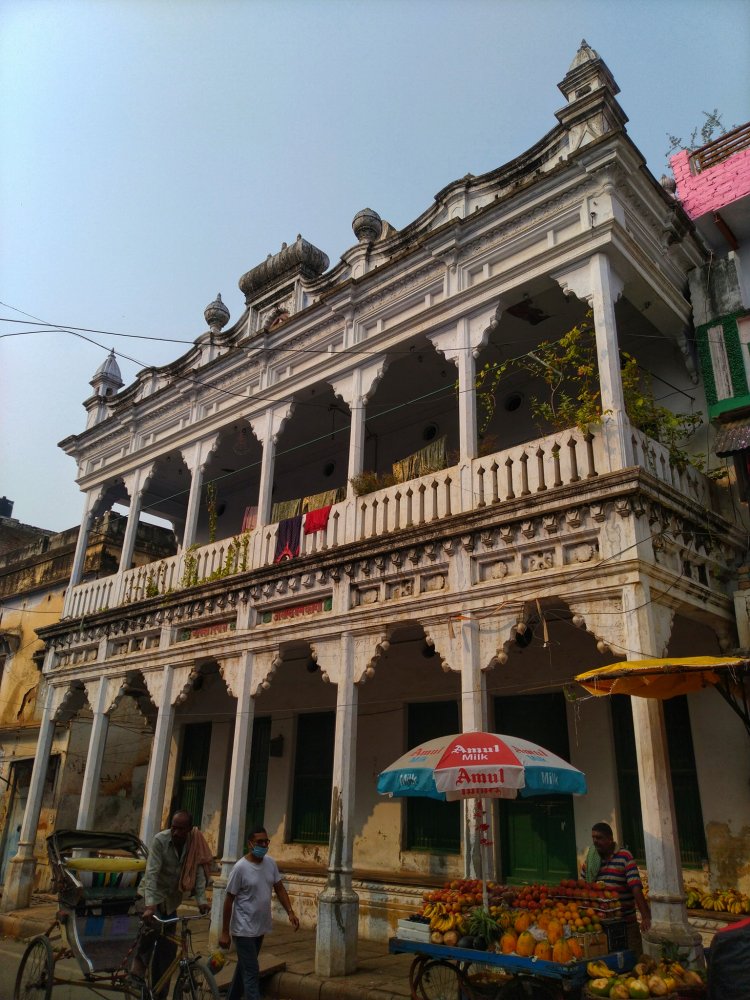 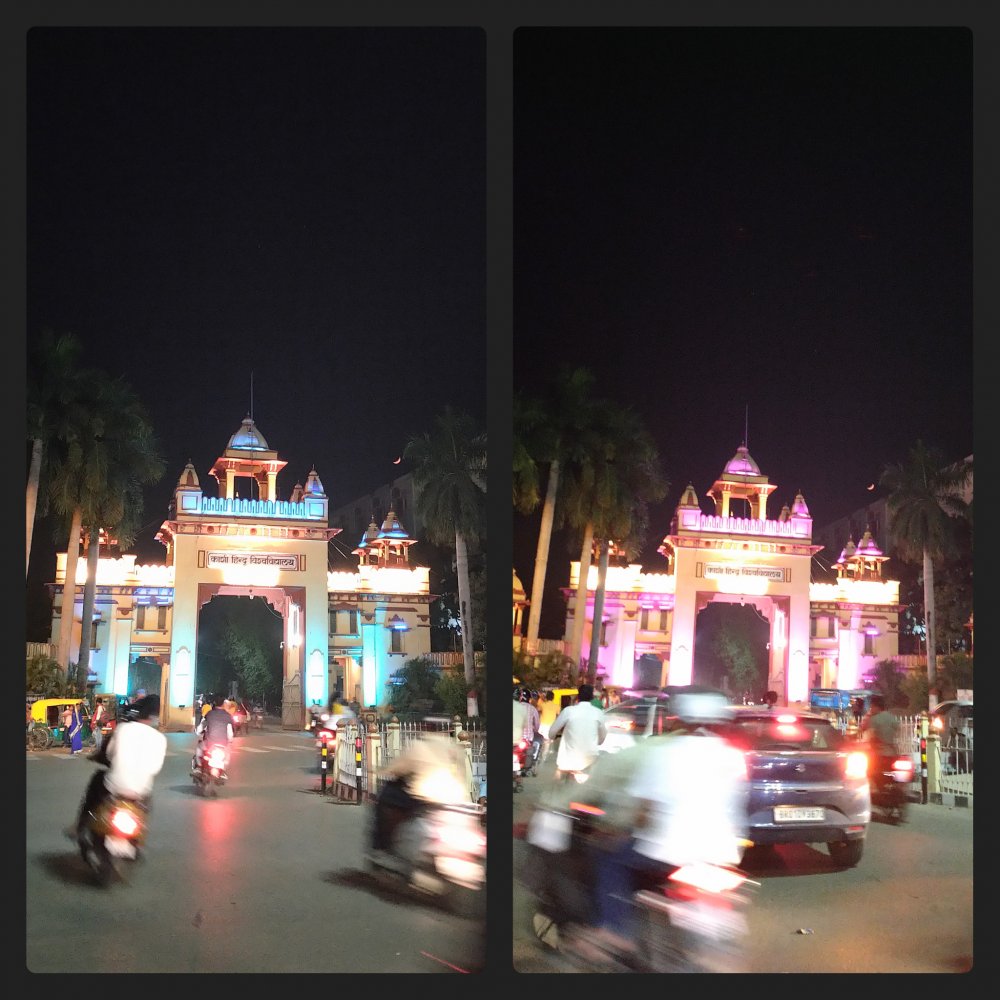 Now this is moving. Keep it coming. Such a huge trip. I want to know more.
P

Day 3:
After a ‘marathon drive’, today We took our own sweet time to wake up. Had a nice cup of tea in a road side tea stall instead of our hotel and headed for Assi Ghaat. It was already 9 am so the ‘Subah-e-banaras’ was over or probably did not happen for covid reasons. The view on the way was something I still recall till date, tea stalls and bunch college goers / retired employee sipping their favourite tea over a long discussion. Such a pleasant thing to experience. Here in Bangalore our mornings are somehow grab your breakfast and run for office.

Anyway, there wasn’t much to do so we decided to search for local breakfast and try it. Finally we got a reference of a shop right behind our hotel which served ‘bedmi poori’ and freshly cooked sabji. The sabji had brinjal and trust me when I say, the brinjal never tasted that good ever. Hot Jalebi was there to wrap up the breakfast. If you visit Varanasi, do ensure you try out their sweets too. We picked few packets of sweets from Sri Hari Dairy and started our journey by 11:45. 685 kms to be covered in 14hrs as per google mata. We had to reach by 1, if my cousin’s demand had to be met.

If you depend on google, it will do wonders. Par hum to us region mein pehli baar chala rahe the to socha google mata pe hi bharosa kiya jaye. The road till Mohania is part of the Golden quadrilateral road, so this patch is pretty good. But from Mohania google decided us to take a ride for country side of Bihar so we headed for Arrah. The road as such is ok, but it a single lane road passing through all kinds of villages and small towns. Within 15 kms, it was evident that the ‘yeh drive lambi hone wali hai’. If you ever travel to this part of India, do not take this road. Though the country side is scenic but the roads are pathetic to say the least. There are stretches where only trucks cross via narrow lanes of villages. So you are stuck between them for hours. By the time we touched Muzzafarpur (NH27), it was already 6:00 and note we did not have our lunch. So once we landed on NH27, we decided to have early dinner and then drive for straight 5 hours to reach Siliguri by mid night.

We stopped at a place called Maa Tara Dhaba (7kms after Muzzafarpur, on NH27) and ordered for roti and chicken. The cook apparently used to work as a chef at the Old Champaran House (Patna); he prepared chicken in Champaran style. And man, what a preparation it was!. It was so tasty that on our way back to Delhi we searched for this dhaba for straight 1 hour, so my dad can taste the recipe. The pic below is my dad relishing champaran chicken. More about Siliguri-Delhi trip later in these posts. By 7:30 we left this place and drove for straight 5 hours and reached Siliguri by sharp 12:00 pm. 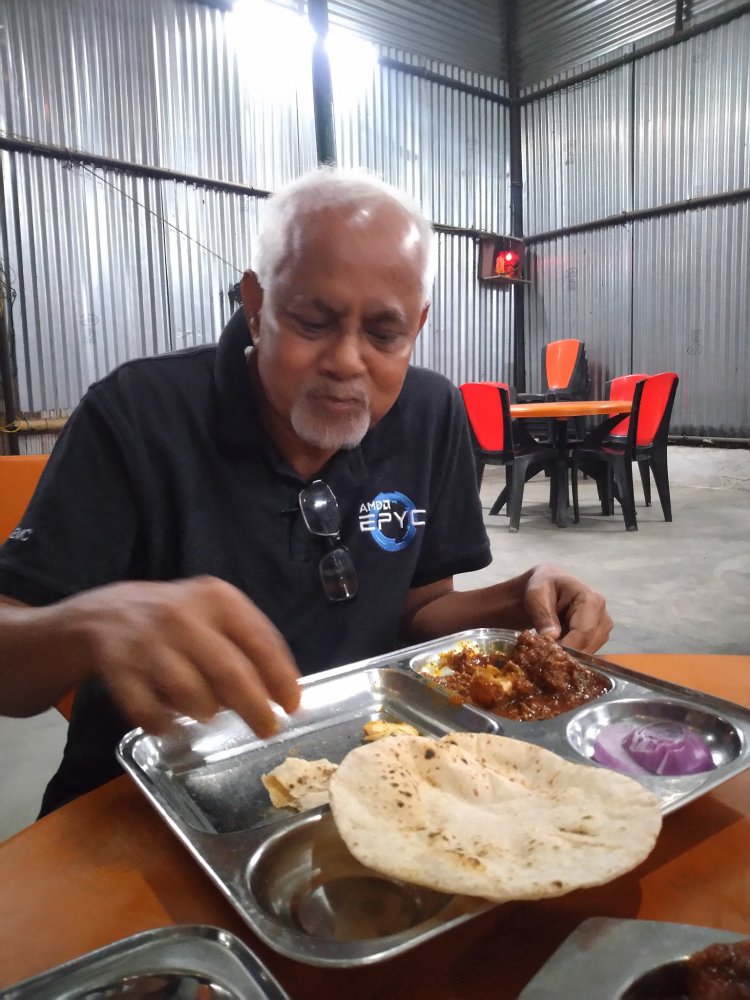 This night felt so special. Being covid days there were hardly anyone on road and this years’ pandal decorations as well were very minimal (something which we are not used to during durga puja in West Bengal). My body was shouting for rest after the 3 day slog. Still I decided to stop at a pandal to absorb the feeling of being in my hometown during Durga Puja after 7 years, that too just in time arrival after a 3 day drive. Lighted a cigarette and happily enjoyed the fag, before posting a pic on facebook with a tag…’arrived’. 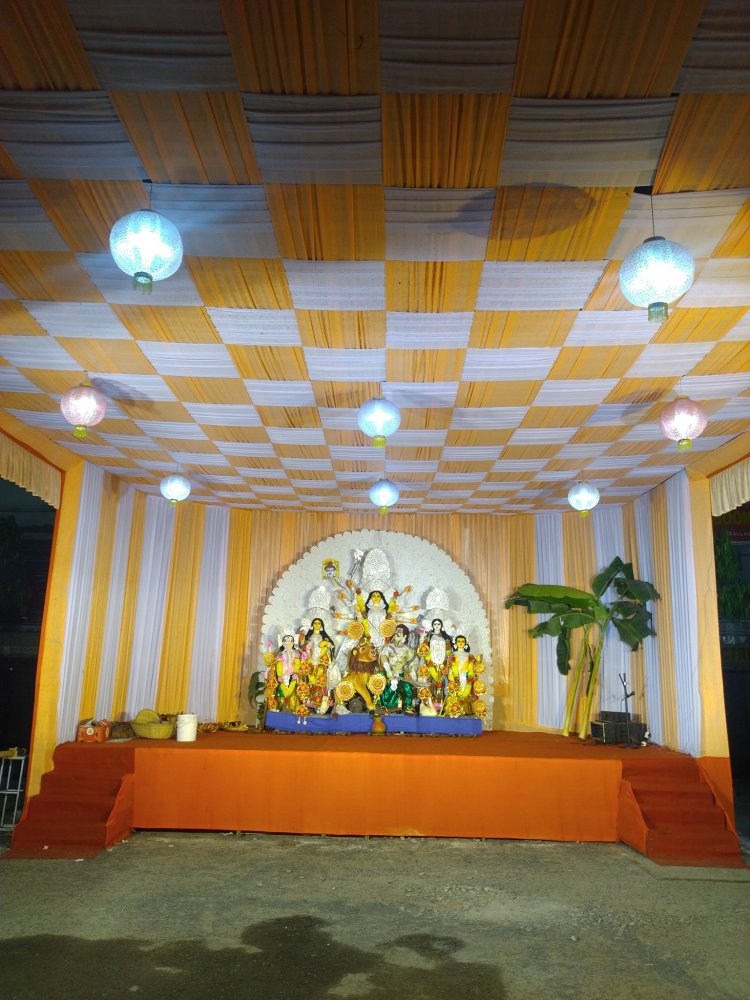 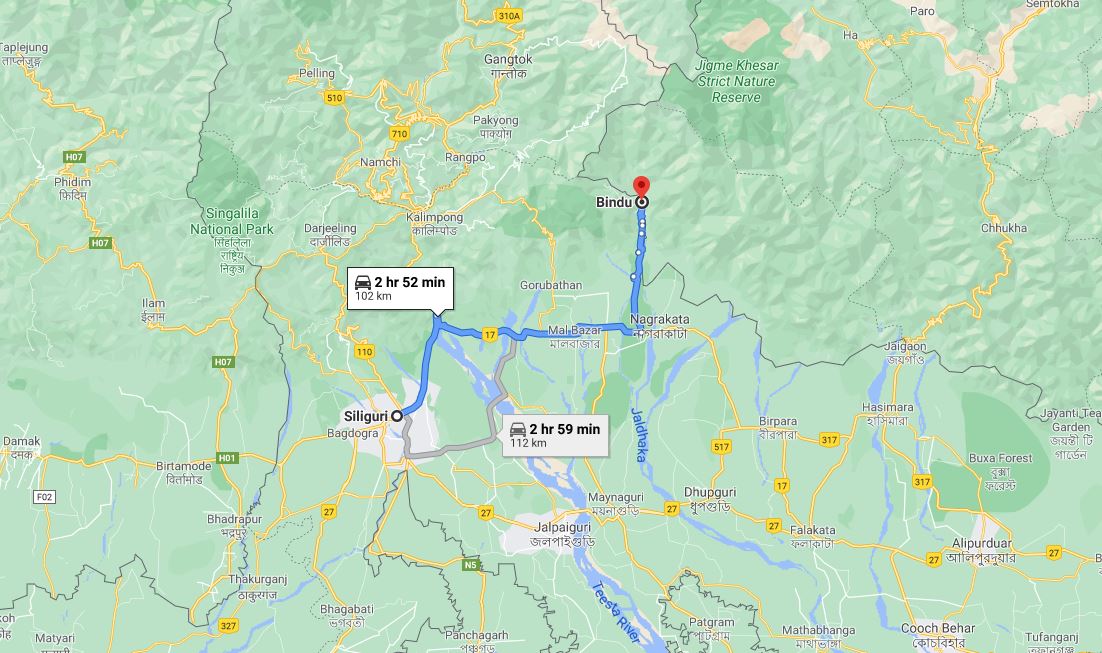 It was Oshthomi (Ashtami, the 8th day of Navratri). Thanks to covid, the urge for pandal hopping was minimal. We decided to utilize the day and go for a family outing.
Bindu is a hamlet just adjacent to Bhutan border ~ 100 kkms from Siliguri. It is in the hills, quite secluded and the roads aren’t good either. But that’s what we wanted. Something offbeat and less crowded. 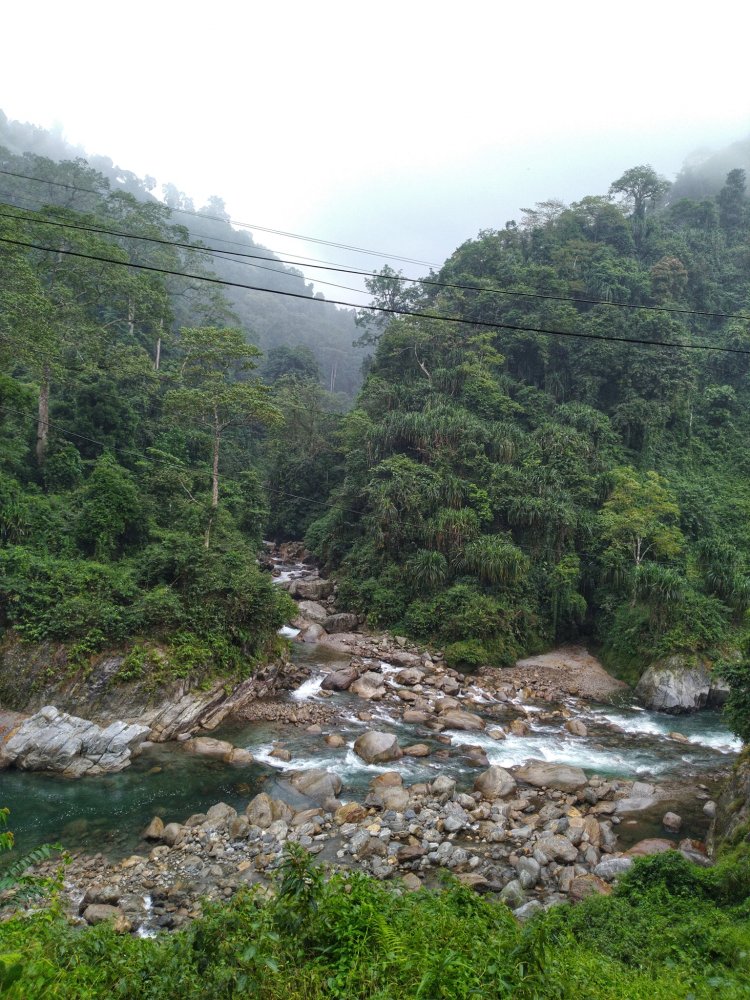 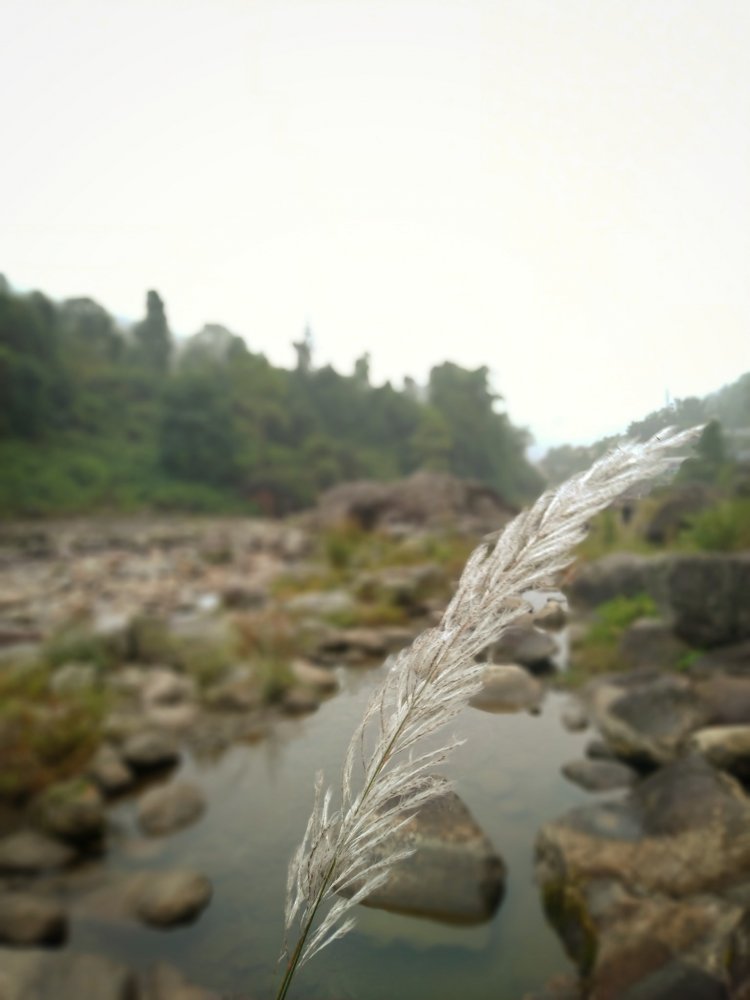 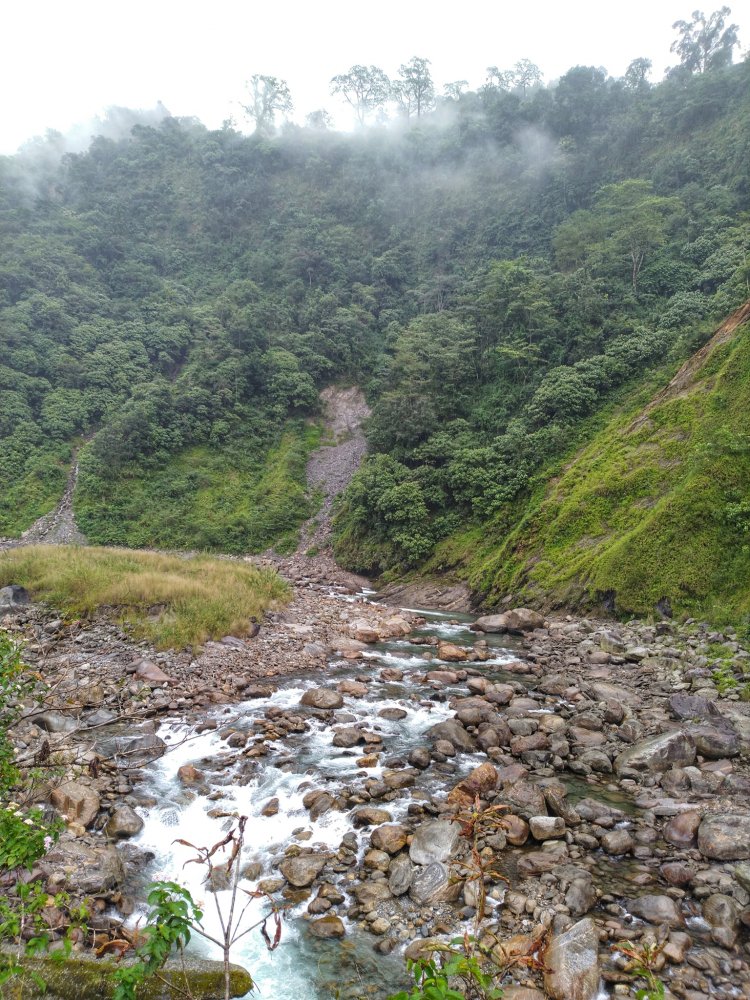 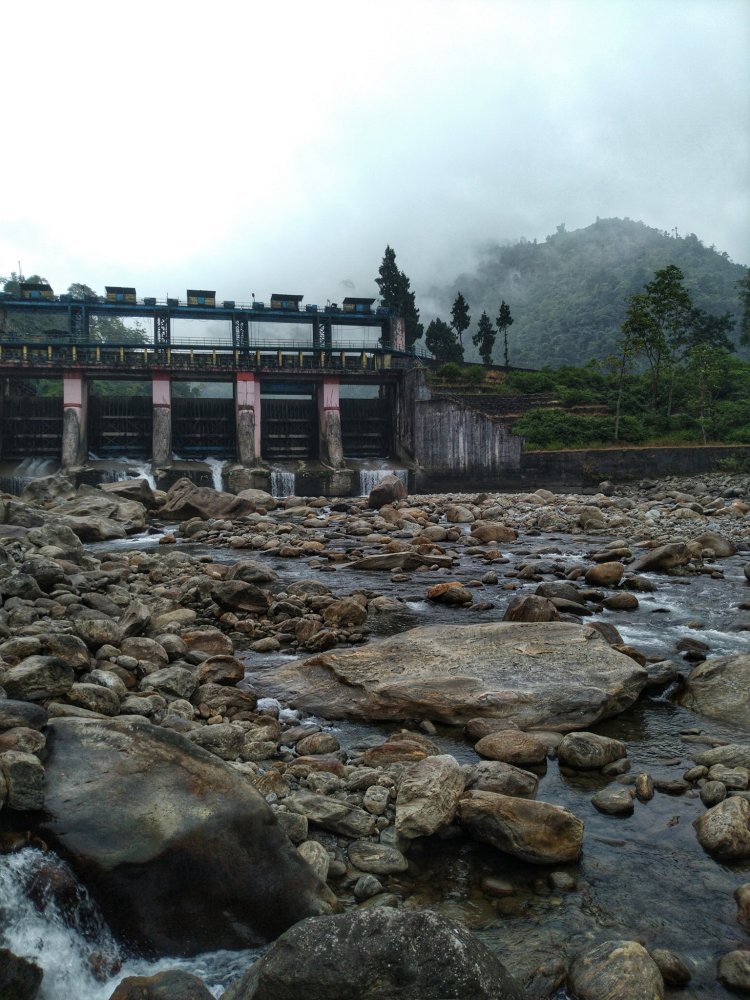 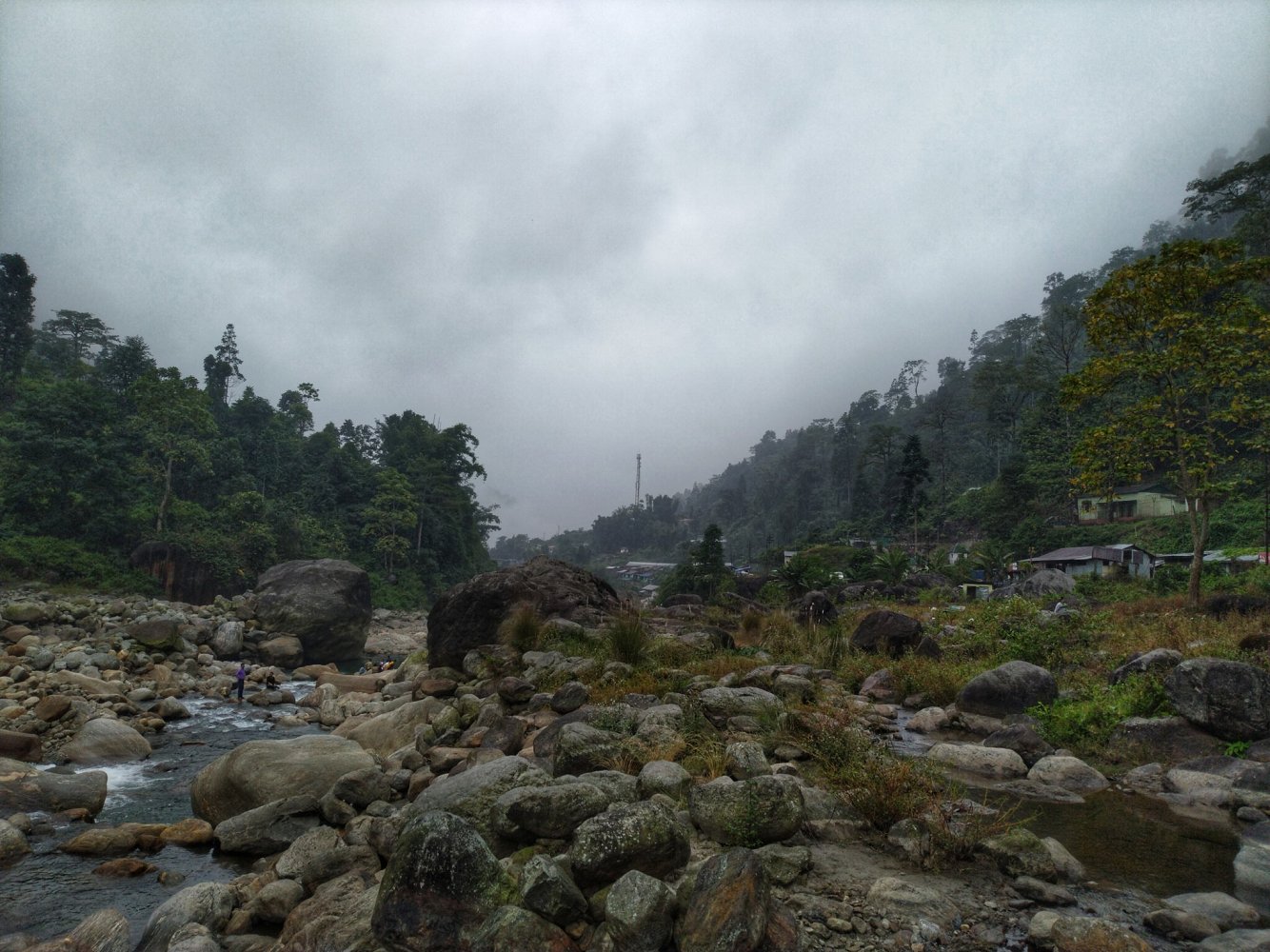 It is only when you live away from your home is when you realize the importance of the home where you lived your childhood. I wasn’t an exception. During Mar’20 lockdown for months I viewed videos of tourist places near my hometown. That did 2 things, 1) I was feeling more connected to my hometown 2) I discovered new places which I haven’t been during my 22 years of stay in my hometown.
One such place is Tarey Bhir. Tarey Bhir was developed by Dec 2019 by Sikkim Govt. It is basically a view point located on a ridge. You climb down 800+ stairs to reach the tip of the mountain to get a view of Melli (the nearest town) and gorgeous Teesta Valley.
This place is 80 odd kms from Siliguri and right after Melli, once you enter from West Bengal. 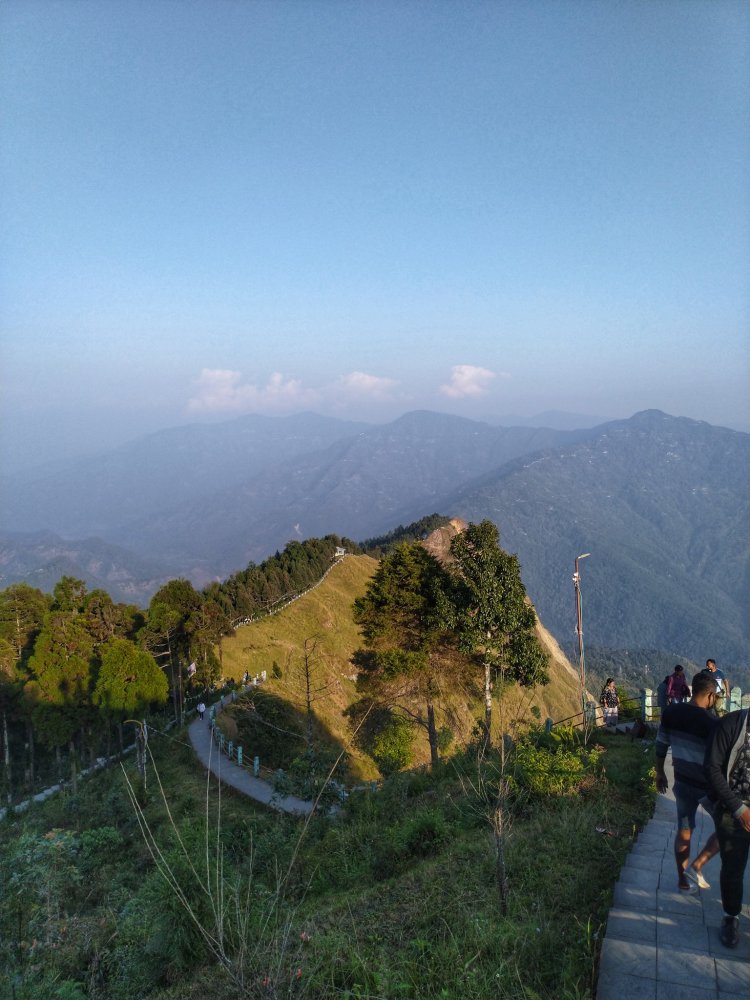 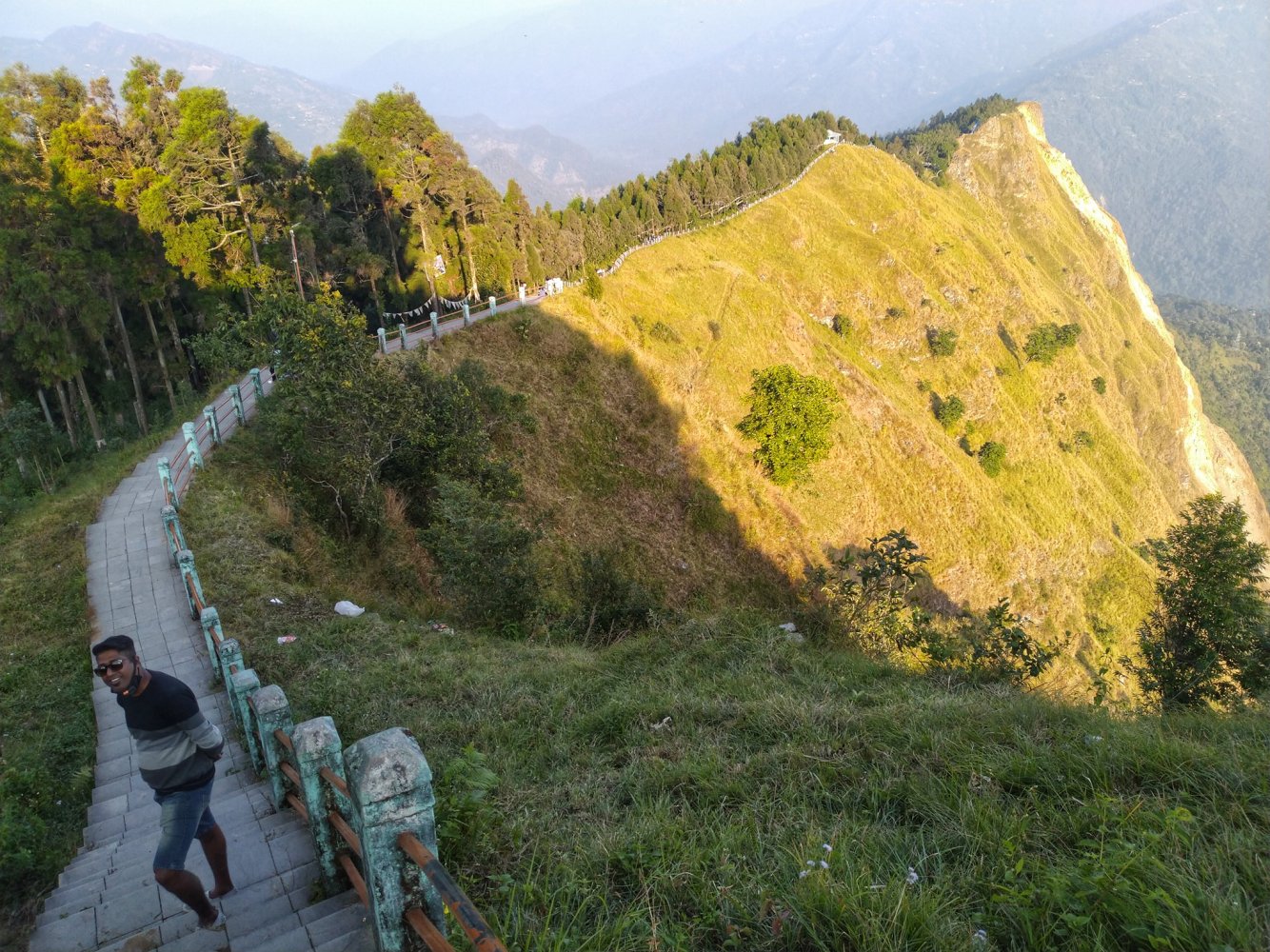 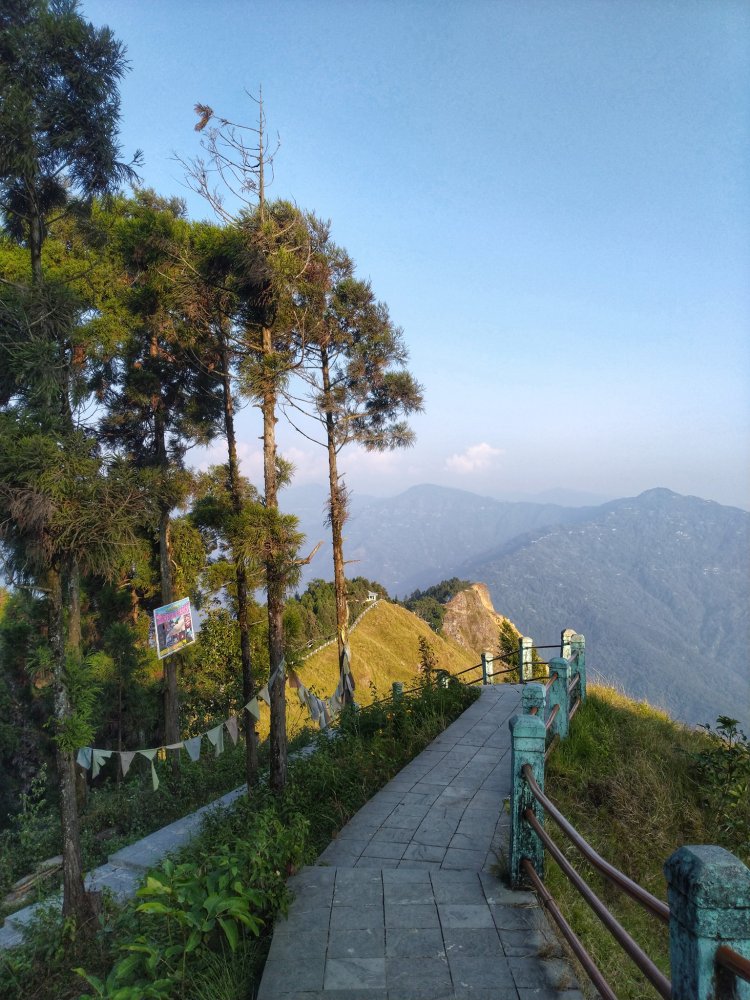 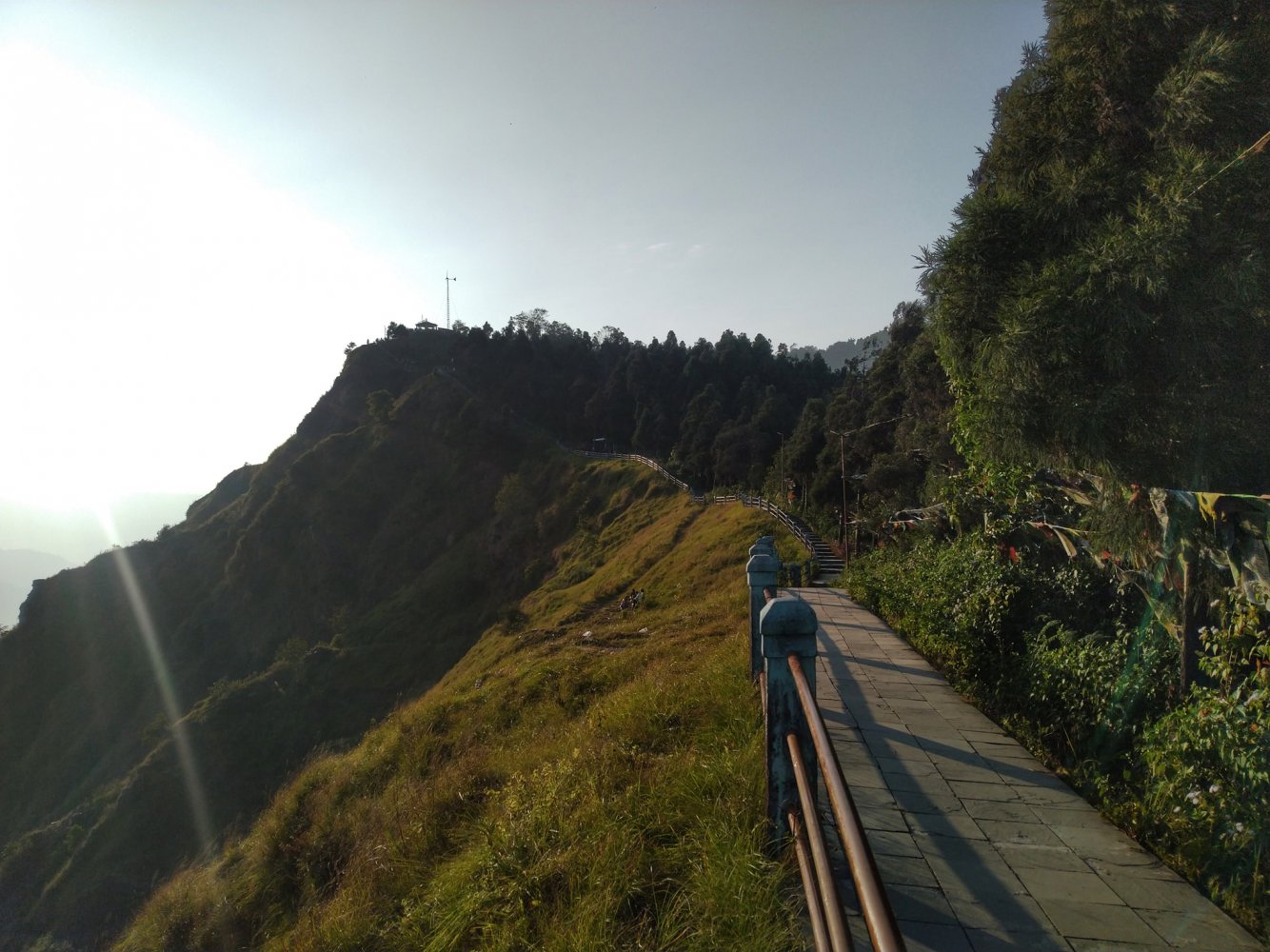 While the actual route is via Melli (marked in red), but the road is terrible for first few kms. Besides there weren’t anyone who could guide us to the actual route. Google mata is pathetic in most parts of North Bengal/interior Sikkim. So we took a loooooong way via Namchi – 103kms. The good thing about this route via Namchi is, we got to visit West Sikkim which according to me was just about ok. I wouldn’t spend my days or money just to visit Namchi anymore. Eventually a half a day trip turned out to be a full day adventure. 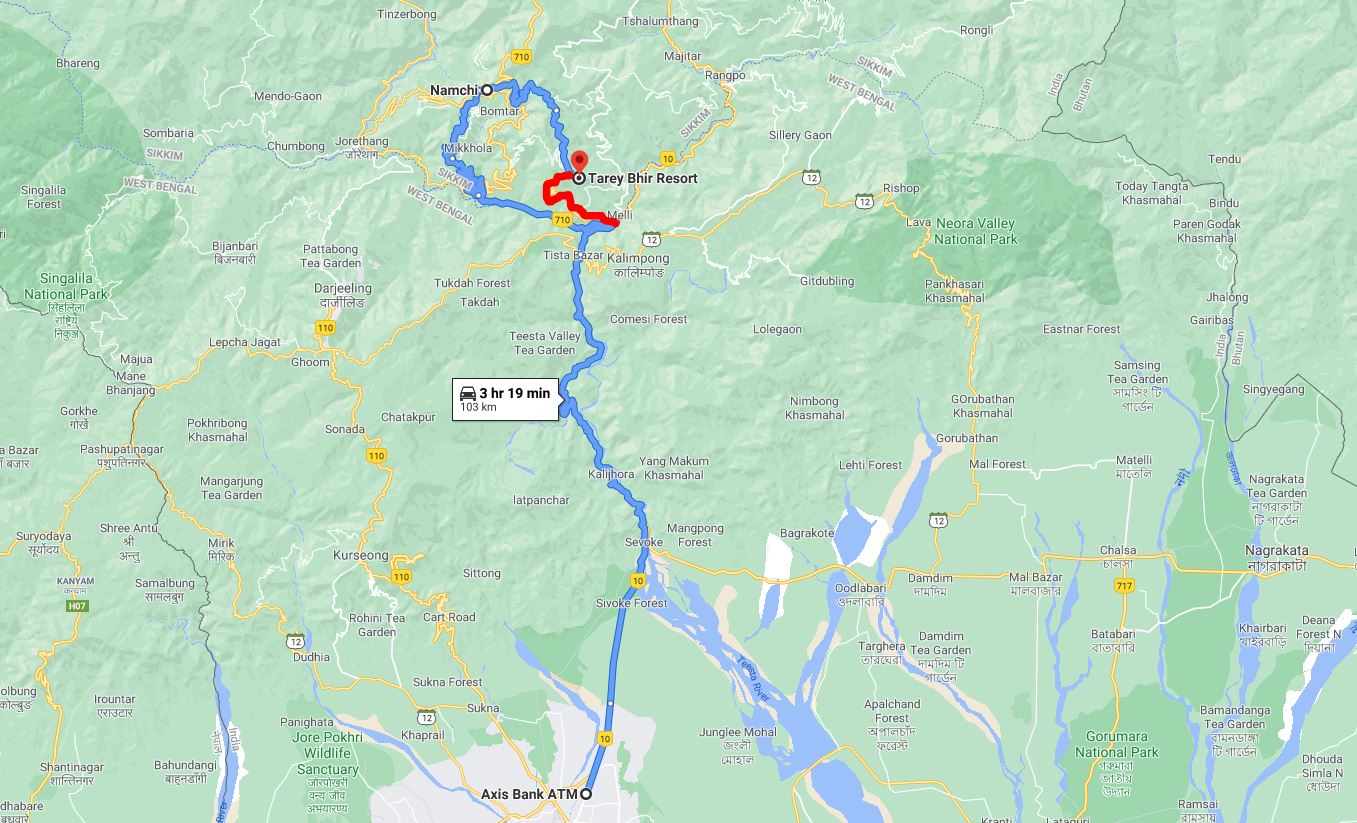