It was all trailer only, main thrilling story is yet to come

NeerajVayu said:
It was all trailer only, main thrilling story is yet to come
Click to expand...

What you lost next ?

Ride to face the fear

So it’s the D-Day for us, after morning ablution we packed our bag to catch 6:30 shared Taxi.
But it was already 7AM; we were 30 minute late due to last night party.
Paid our bills (950INR) and headed towards the taxi stand.
Taxi was not full so there were waiting for more people to come, Taxi driver told us he won't move until he get 10-11 passengers.

Surprise we found Vishal in the same taxi, he was returned from Rishikesh last night.
It was good to see him again.
Middle bay of taxi was already engaged by 4 people from Indian Navy guys.
But another Big problem was ahead of us.

Rawat bhai - I can't sit at back seat, would be tough for me, can't handle the vertigo.
Now what????
Next taxi is after an hour and no assurance for a window seat.
I and Vishal luckily able to convince him as we told that will pay for two seats in the back so you won't face any issue.

Finally taxi moved at 7:30AM, after a bumpy ride Rawat given another creepy look and another session of Anardana started.

We were in T-shirt because weather was pretty much decent and clear!
Stopped at Gnaganani for tea/sutta break, it was like freezing there.
I bought one cap for me, asked Rawat also as he was shivering too but the same reply (I am Rawat...........)

11Am finally we reached Gangotri, Taxi charges was 160INR.
Had a brunch and packed Aloo Parathas for the day, we were three people now, me, Rawat and Vishal
Some uncle Ji joined us, he was not sure but just wanted to go, he told us if he find any difficulties he would return.
We checked everything again, suddenly Vishal told he have to get the permit from Gangotri forest office.
Big problem - Office already closed for the day at 9AM

What to do now??
We are Indian so we find Jugad everywhere right!!

We had permit for three people, Me, Rawat and a Guide
So Plan was Vishal will be the Guide
We started the trek, after initially 1 KM reached at check-post; they checked the plastic material count.
Initially they were not agreed that Vishal is a Guide, Look and feel of Vishal was totally diff that anyone can understand he is outsider and not Uttrakhand local.
They denied the permission, but after so much talk when Vishal told about NIM and other local folks then they allowed us.
It was kind of mess, we did hell lot of talking.

Finally they told us that they know this trick, since we talked gently they allowed us and given warning not to try it next time.

After moving from check-post we got first Glimpse of Sudarshan peak. 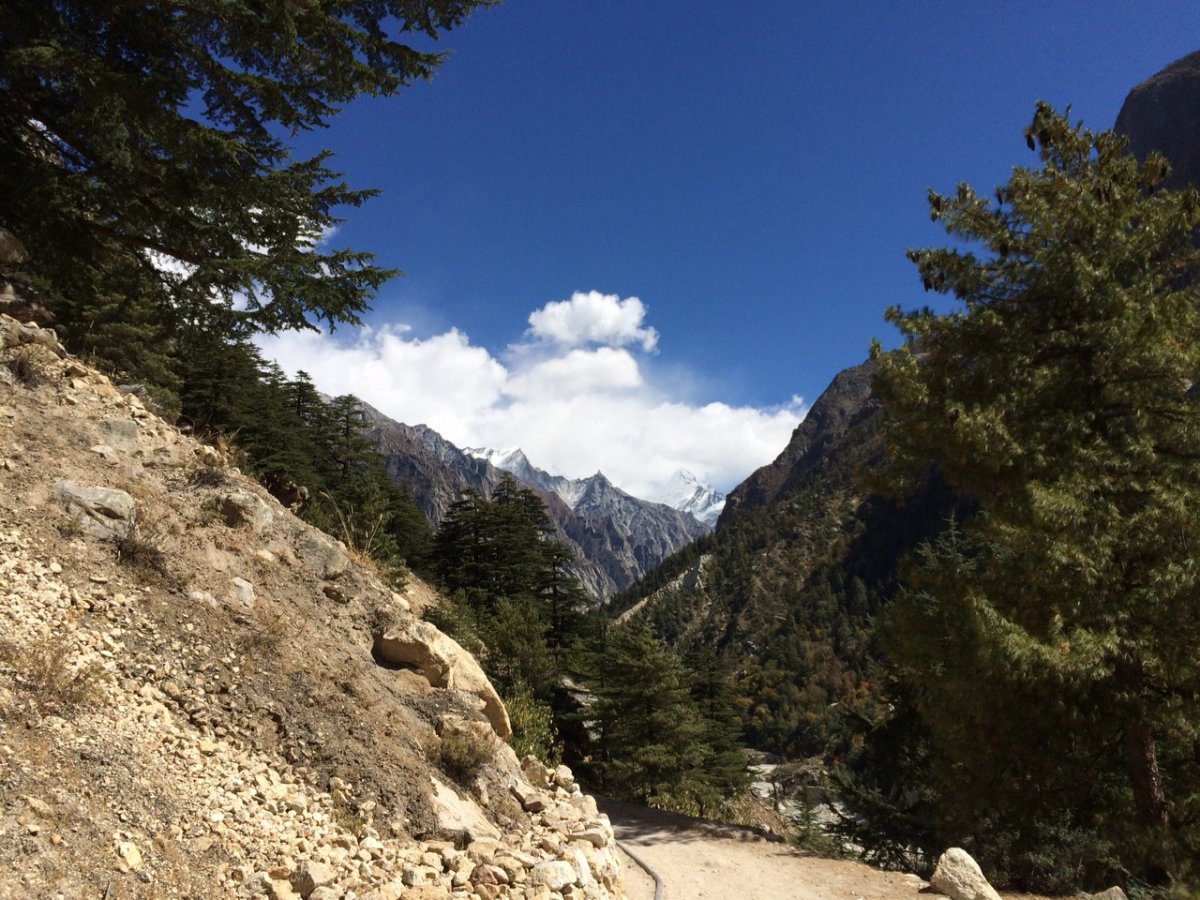