BCM Touring has been a constant part of my life since I joined his forum in January 2010. However for past one year, almost, I had stayed away from it, at times purposefully and while majorly wok pressure did not allowed. Further, health concerns and other issues also consumed my mind space forcing me into a sabbatical of sorts. However, this sabbatical extended only towards penning down my travel stories. After three months of bad health, I resumed my travels in August with a weekend trip to Khirsu, thereafter the wandering continues. Since then I have made eleven trips to Himalayas and plains, out of which all Himalayan trips reports I intend to present in a series of post in this thread.


To begin with, I start with a log of unfulfilled trip of Nelang valley, others will follow…

On a cold chilly December night of the year 2013, sitting by the bon-fire, at the terrace abode of Tilak Soni – the Eagles Nest, a proposition was made by Tilak Bhai.

Nelang Valley, we heard it for the first time, a terrain somewhat similar to Ladakh or Spiti but situated closer to Gangotri, shrouded in mystery could be visited. Tilak Bhai offered us to show the valley next May. We were excited at the prospects. Well, time flew, so does the plan and we completely forgot about it till we saw an event created by Tilak Bhai reading the same golden words – Nelang Valley. The first Nelang Valley expedition happened in September 2014. I missed it.

However, second opportunity presented itself when Tilak Bhai once again created an event covering Nelang Valley in May 2015. This time I wasn’t going to miss it in any case. I was one of the first few to confirm their participation.

The departure was still a month away. And important work kept cropping up jeopardizing my plans for Nelang valley. A day before the scheduled departure from Anand Vihar with the group, I was not sure whether I could join the group. It was a nerve wrecking day and by end of the day, I was finally able to squeeze 5 days for the expedition. Finally my trip was on. I breathed a sigh of relief.

I picked up my friend and old travel mate Praveer in the wee hours and was the first one to reach the departure point. Within next few minutes, other co-travellers started to arrive. Tilak was there too. By now sun was breaking out and the group decided to move on for its destination of the day – Uttarkashi. Few travelers were directly expected at Uttarkashi. We reached Uttarkashi while it got almost dark. Others too followed soon. 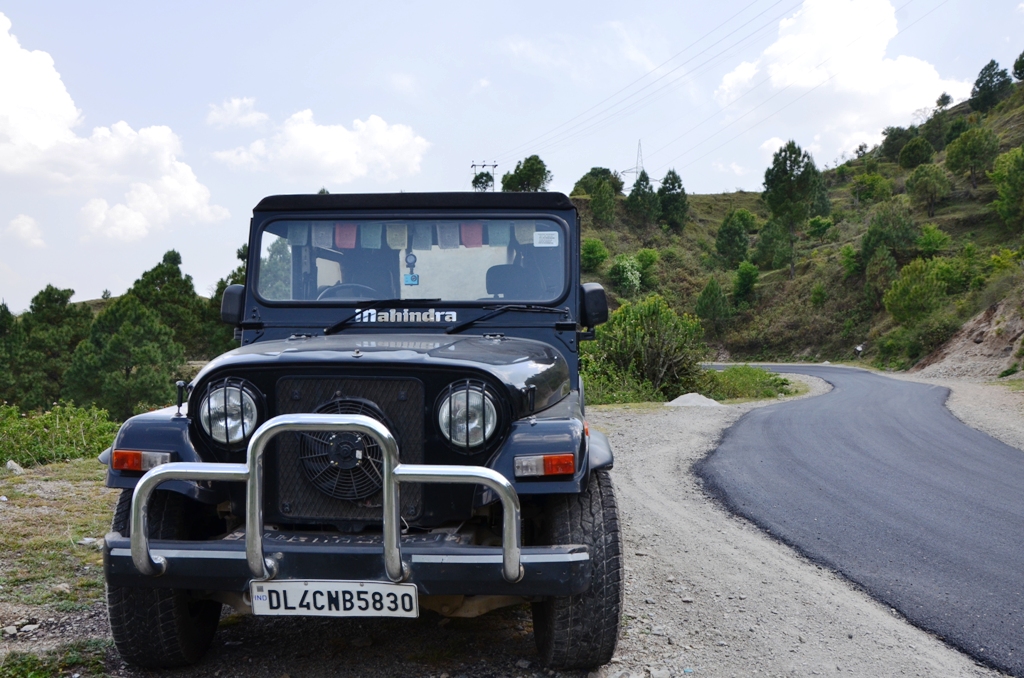 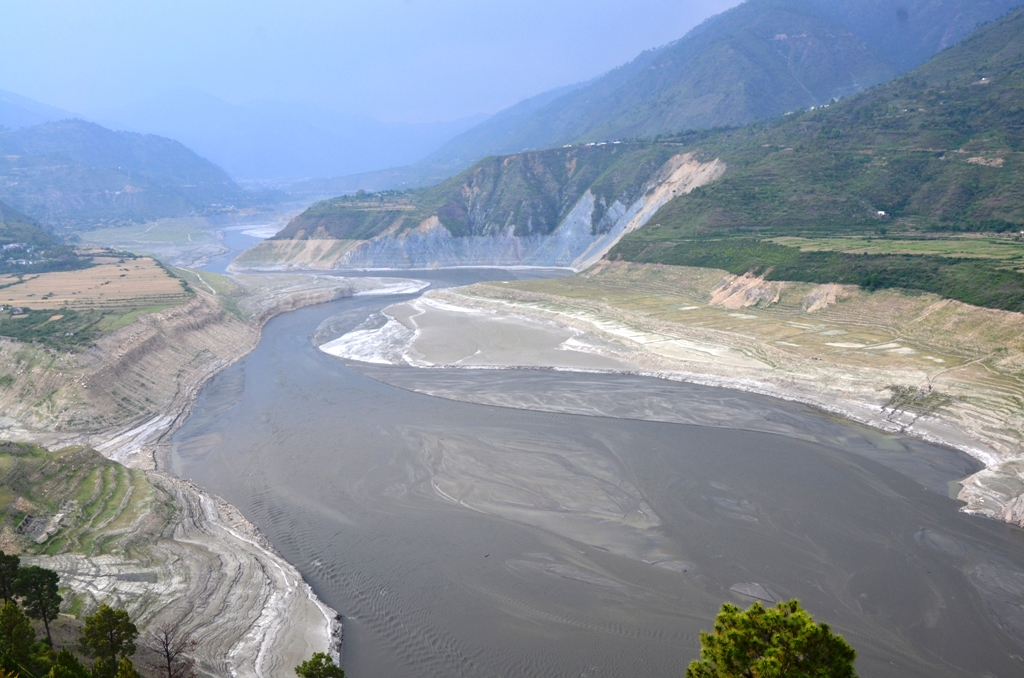 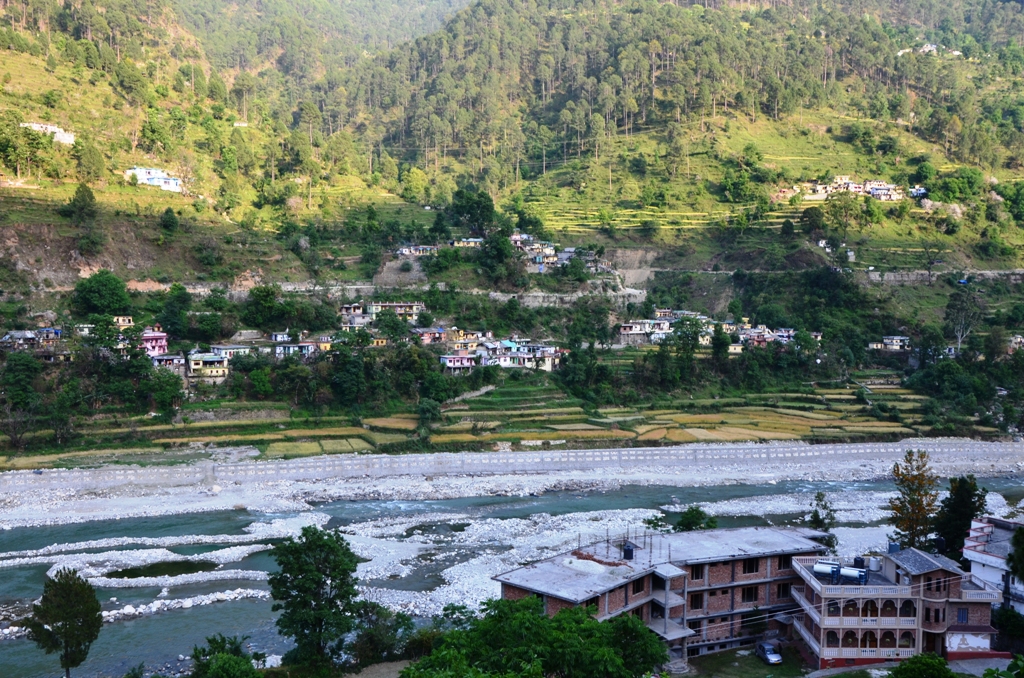 Plan for the next was decided. After paying our respects to Lord Vishwanath early in the morning we would head to Gangotri and thereafter we would get back to Bhaironghati from the route to Nelang Valley diverts. In all, it would have been close to 140 kms of journey, the last 25 kms or so being the most difficult to negotiate. 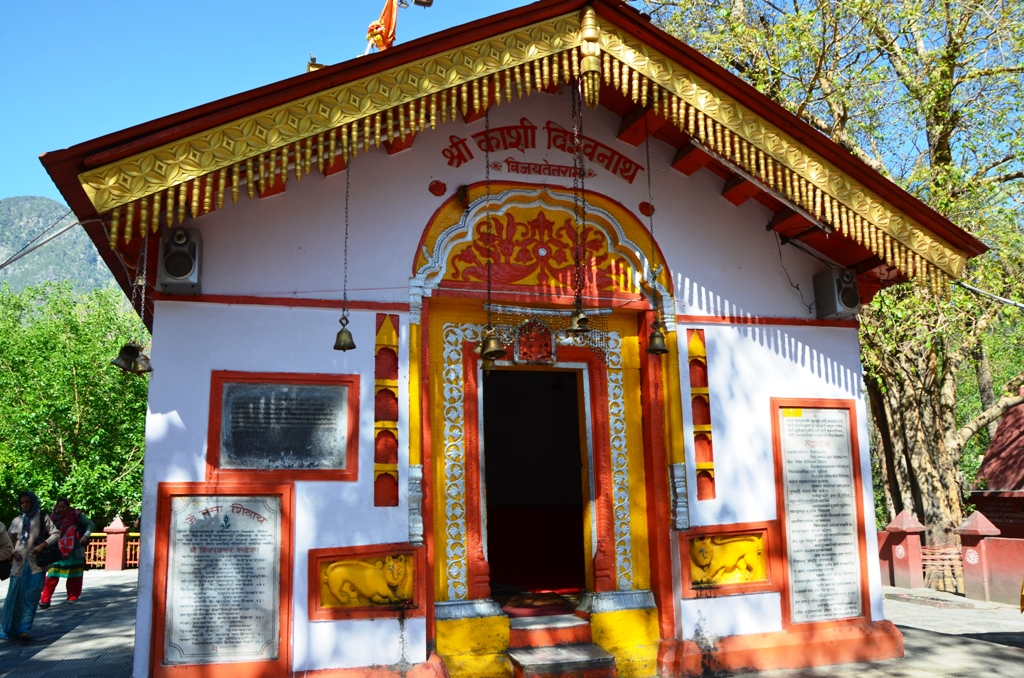 As with most of the well thought out plan, nothing moved according to it. We had a delayed start with lot of time consumed at Lord Vishwanath Temple. Even thereafter the going was slow with many breaks. We reached Bhaironghati quite late for lunch. After having lunch, it was decided to skip Gangotri and instead straightaway move towards Nelang valley. 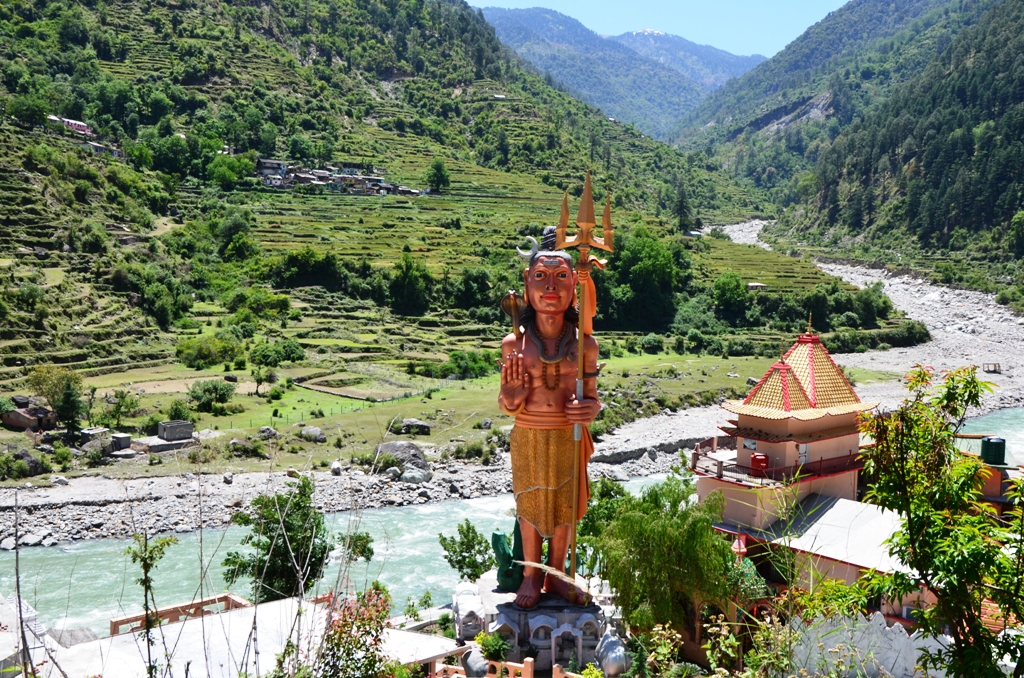 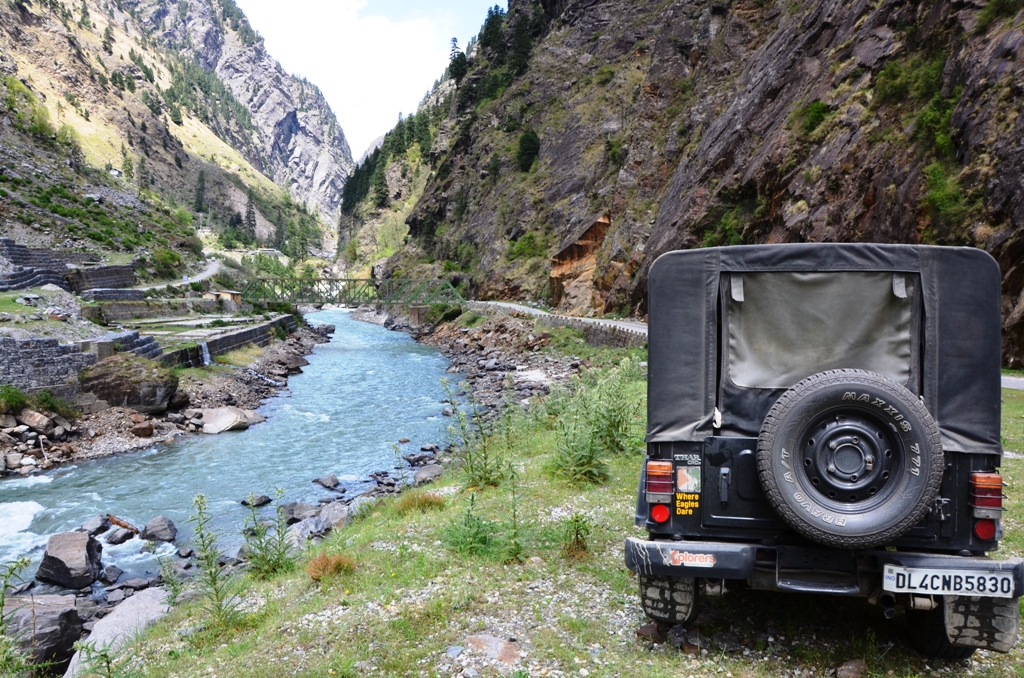 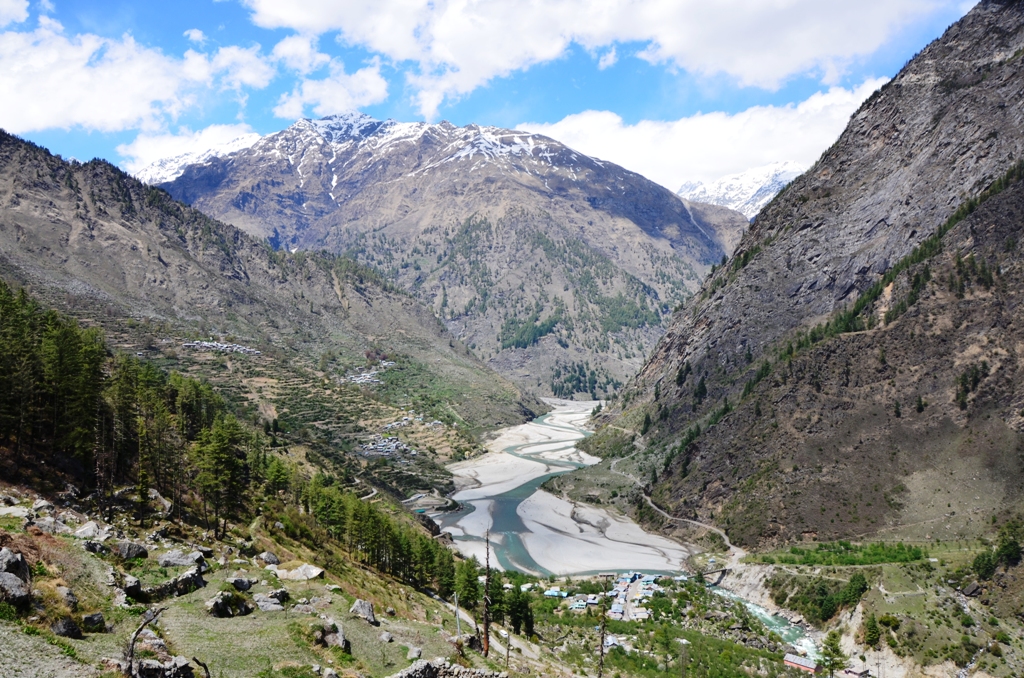 Our permits were checked at Bhaironghati check-post and after the officers got convinced they lifted the barrier. Initially the route seemed alright but few switchbacks, it showed its true colour. The track was simply a blasted track full of boulders and loose rock and a narrow one with sheer drop of hundred feet’s down into the Jahnavi River. The river water was gushing down the deep gorge. It was slushy in parts along with many nallah-crossings swelling up due to the fresh snow-melts. 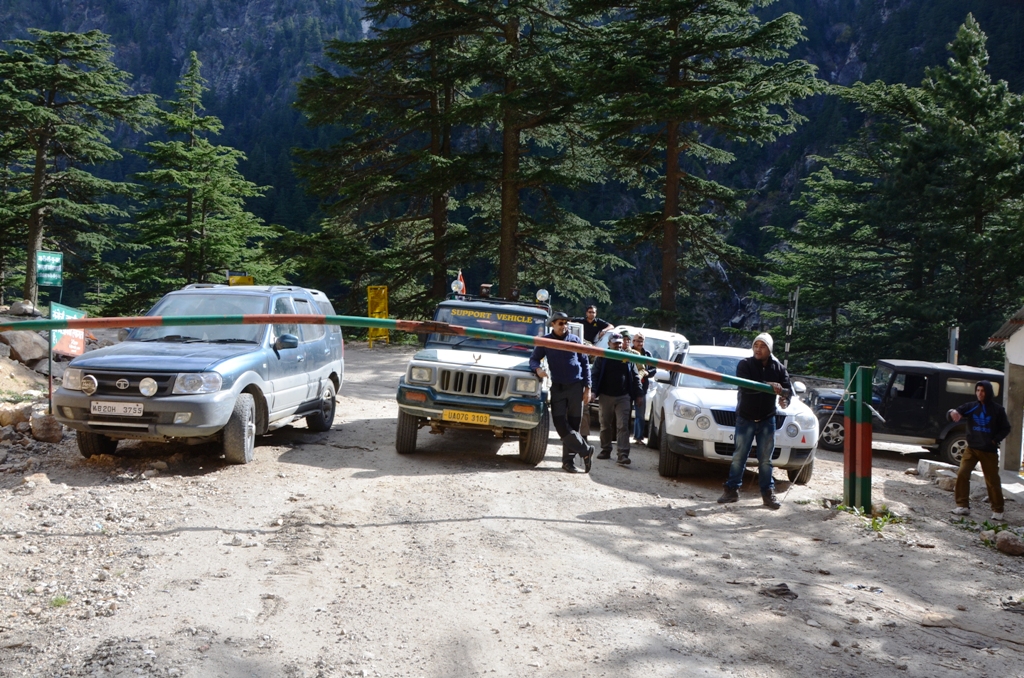 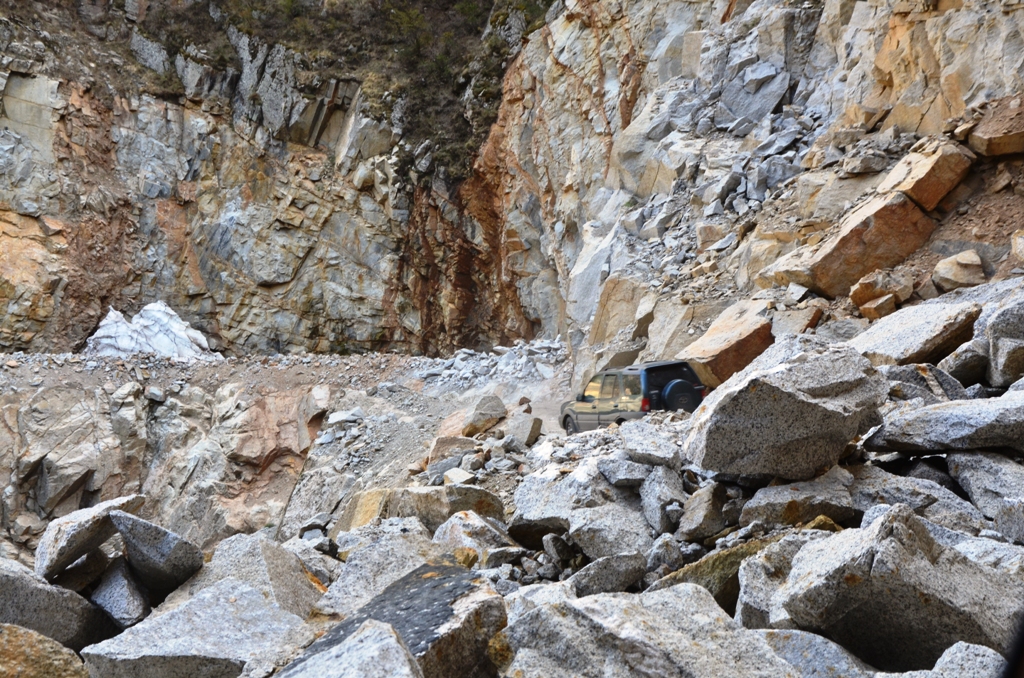 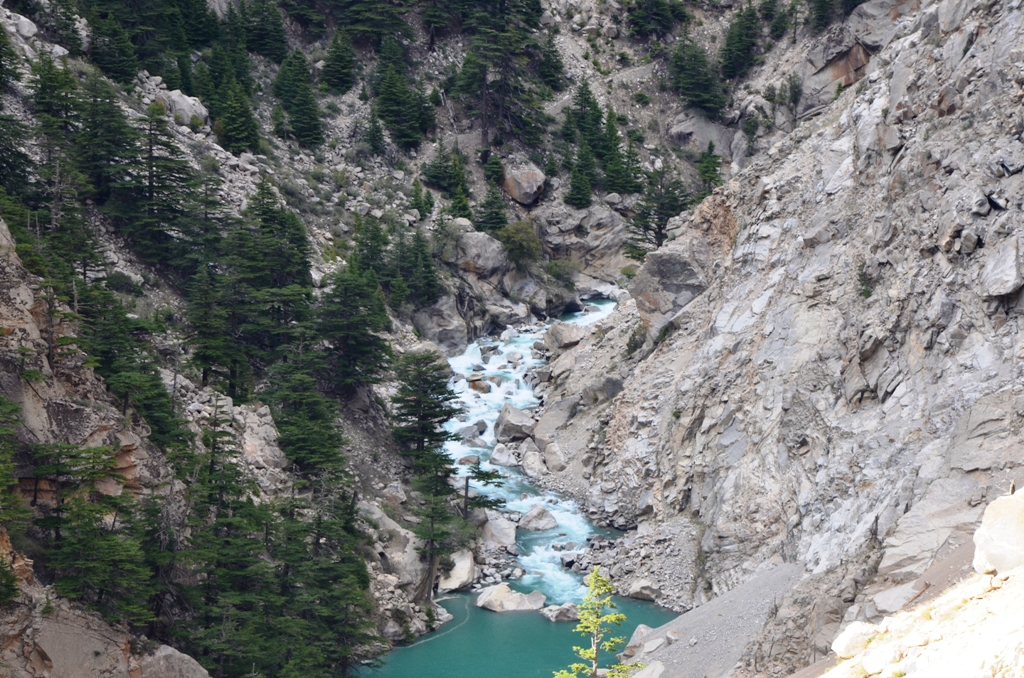 Tilak waived us to stop to have a look at wooden plank bridge/trail along the left bank of Jahnavi River. We looked on bewildered at the engineering marvel of our ancestors. This wooden bridge/plank is one of the specialties of this route. Unfortunately, the bridge/trail has been damaged and is no longer in use. 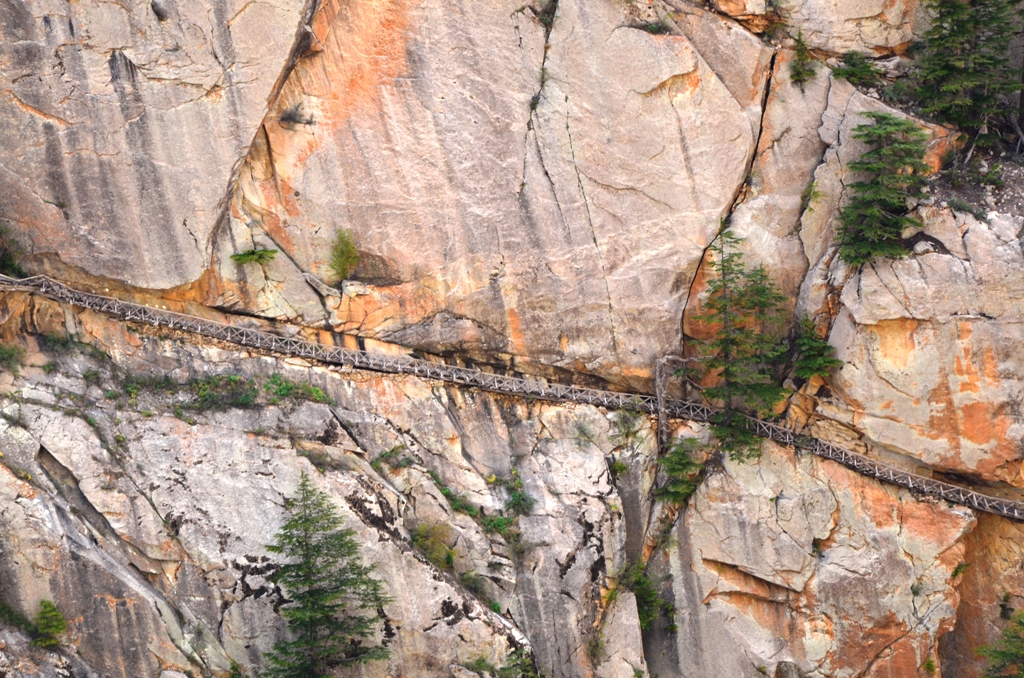 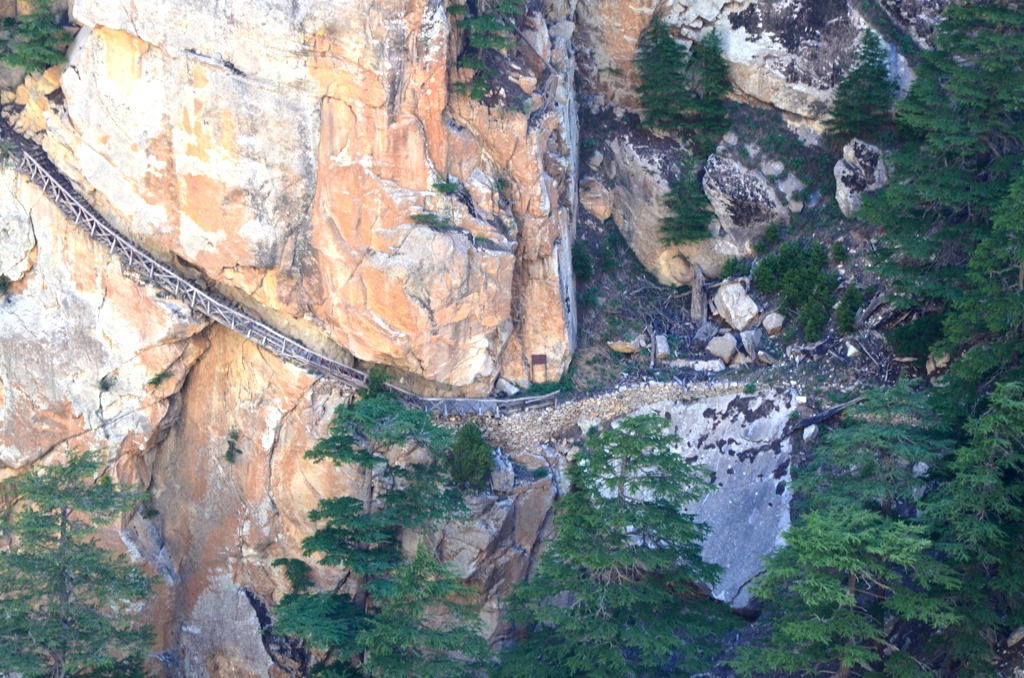 Thereafter it was a slow going while carefully negotiating the boulder laden track yet the surroundings were breathtakingly beautiful with freshly cut glaciers besides the track. After few kms, the narrow road with deed gorge running parallel gave way to a wide, dusty and flat track where we could motor along. By this time, sunlight was fast disappearing and it was getting uncomfortably cold. We came across a memorial of dead soldier who died in duty fighting the fierce weather conditions of Nelang. Interestingly, rum is offered at this memorial which mysteriously gets consumed. 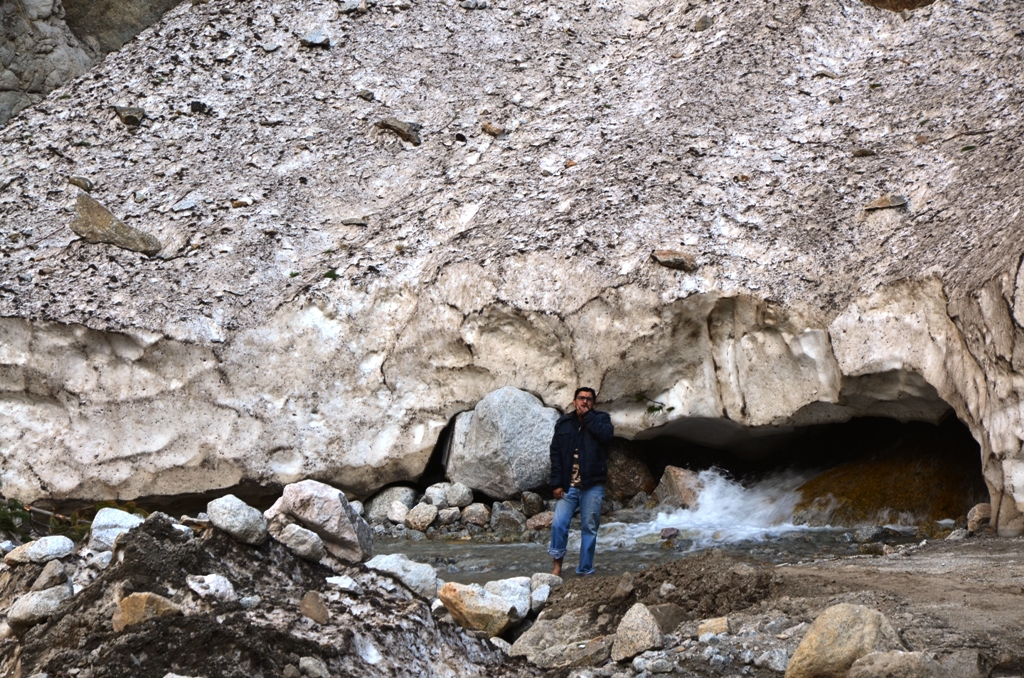 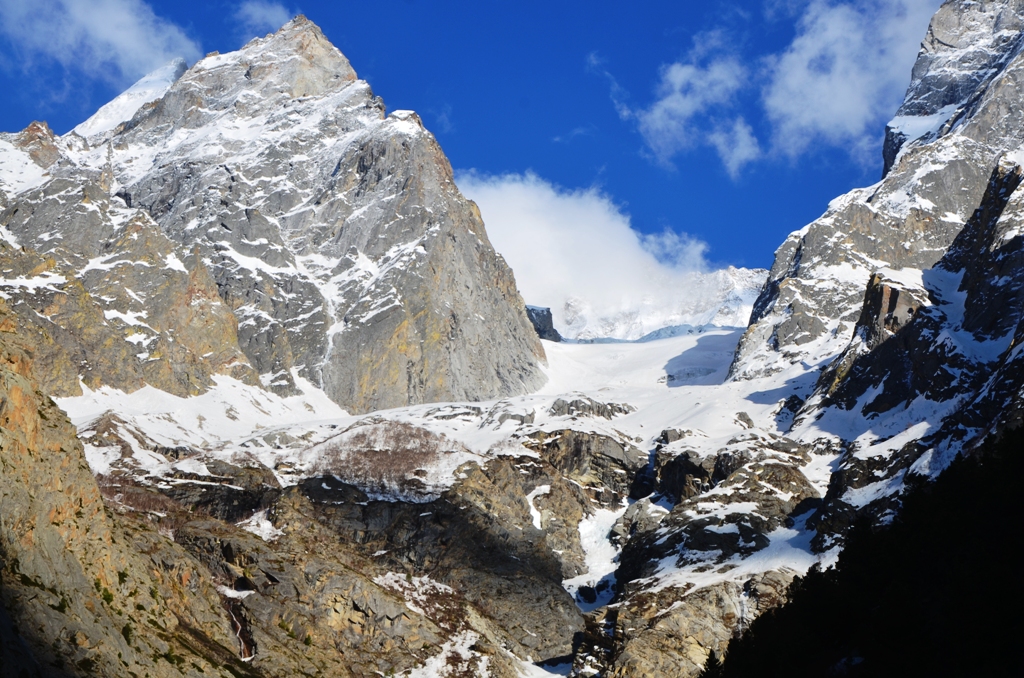 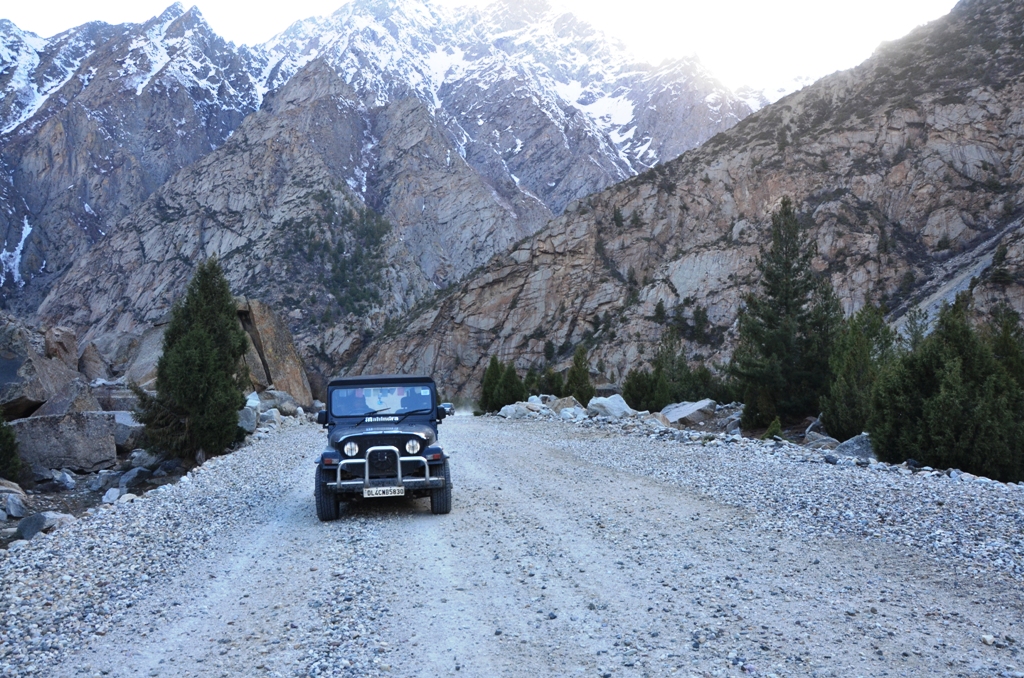 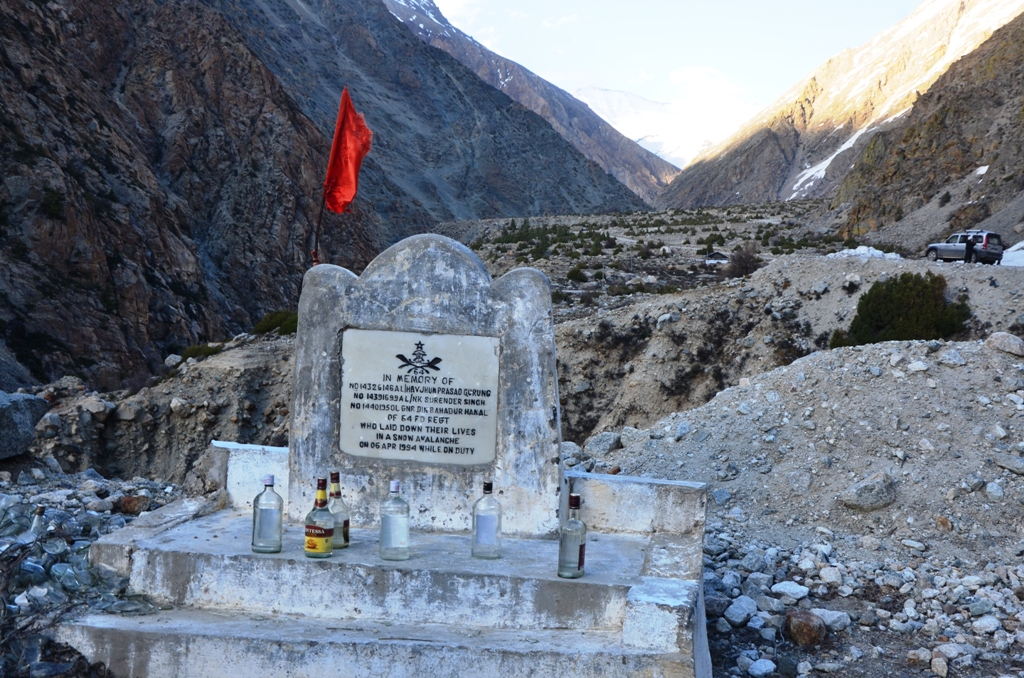 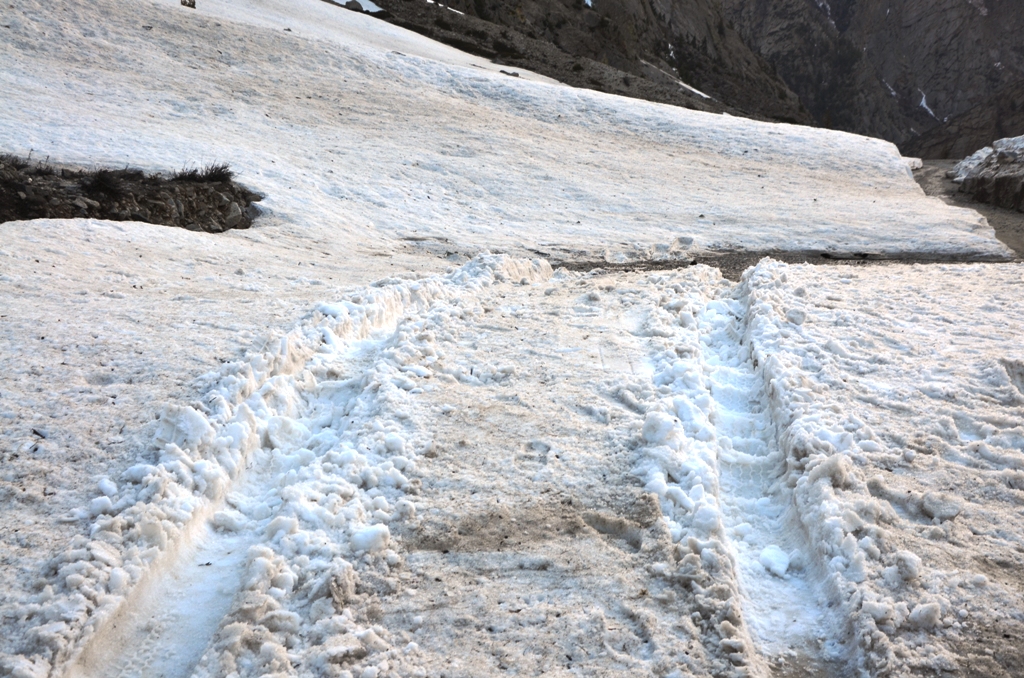 We reached the Nelang ITBP post. Our permits were thoroughly checked. Nelang post was our halt for the night. The post is covered by high snow laden mountains on all sides. We were offered a closed shed which had about twenty beds. We graciously accepted them and occupied them soon. We had lost all the sunlight and now the moon was shining bright. It got mercilessly cold by now. Water started to freeze. It was impossible to even touch water. ITBP prepared a wonderful meal for us which we gladly consumed. Thereafter we were left on our own to spend a very cold night waiting for the day break so that we can begin our onward journey.

ITBP provided us warm water for morning ablutions. Further they served us a sumptuous breakfast before we embark upon further deep into the valley. One Safari refused to start and it took a while to get it going.

It was a clear day with sun shining bright. We wished t cover Naga posts, Neelapani, Jadhung village and Sonam post and even PDA situated in three different directions but about 12-15 kms in distance from each other, PDA being the farthest towards Indo-Tibet border. However, our ecstasy was quickly curtailed as all the routes were snowed out and glacier cutting was still under progress. We were wrecked and left disappointed. Our actual journey was nipped right in the bud. Nelang post was just the beginning from where we could explore the virgin valley. 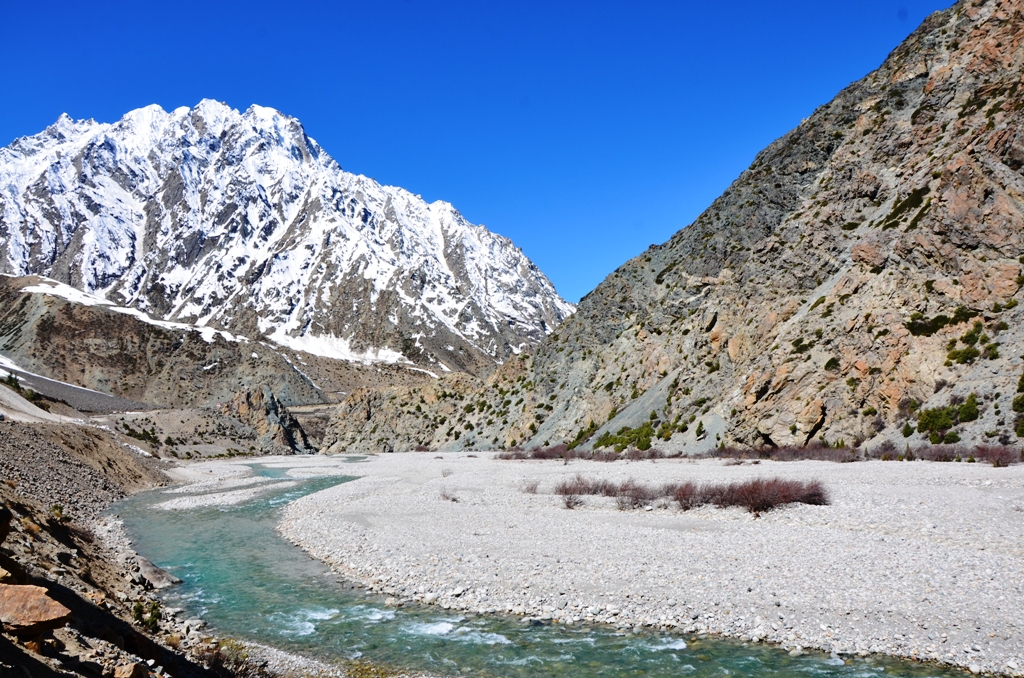 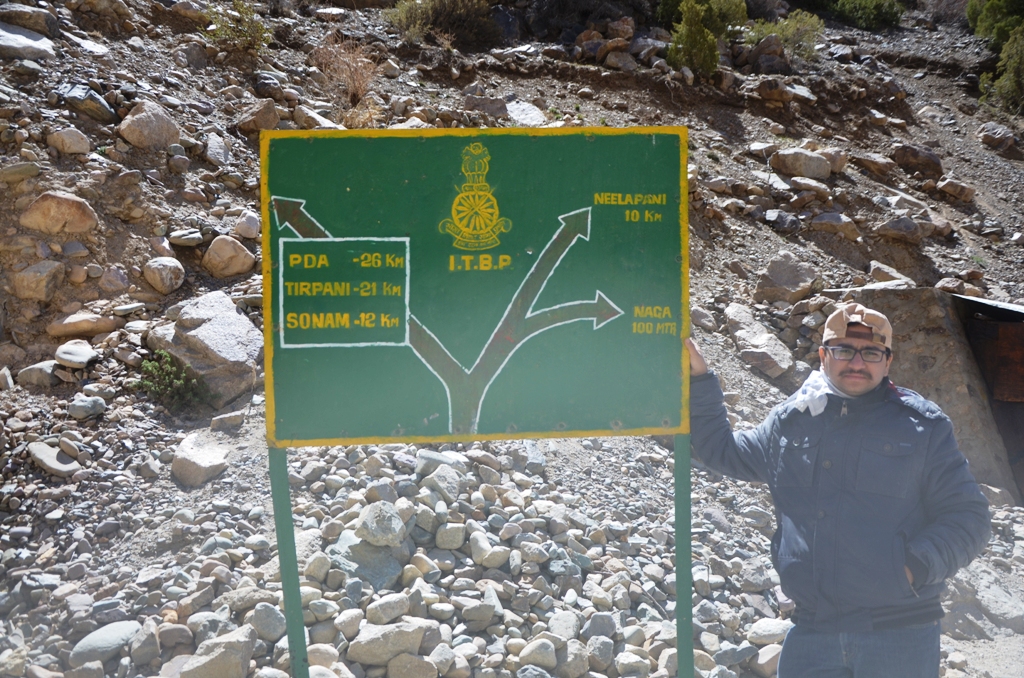 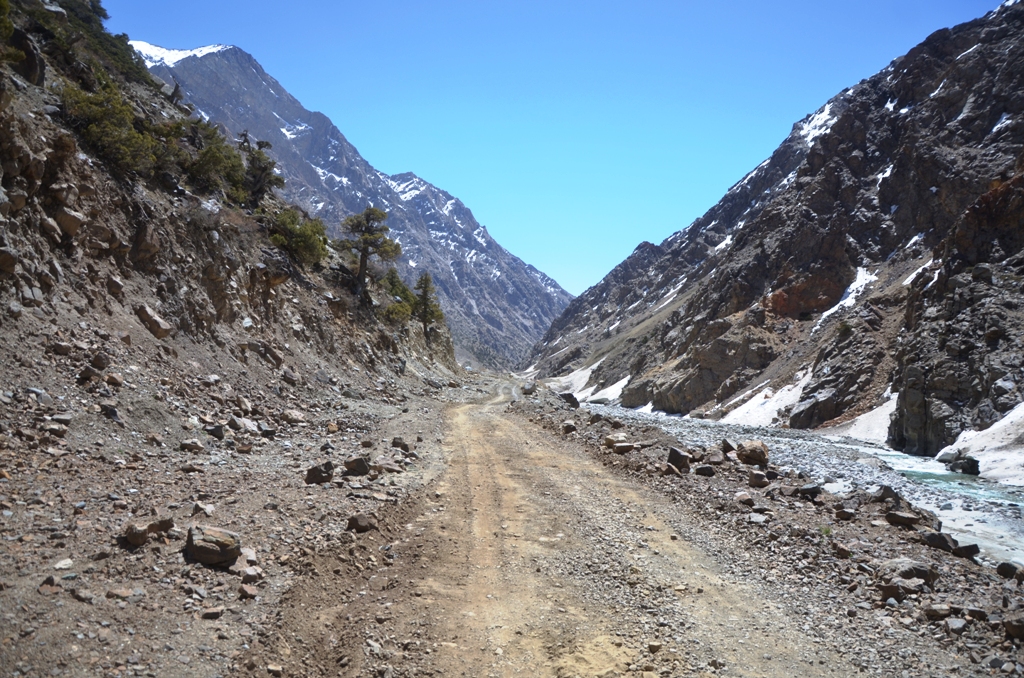 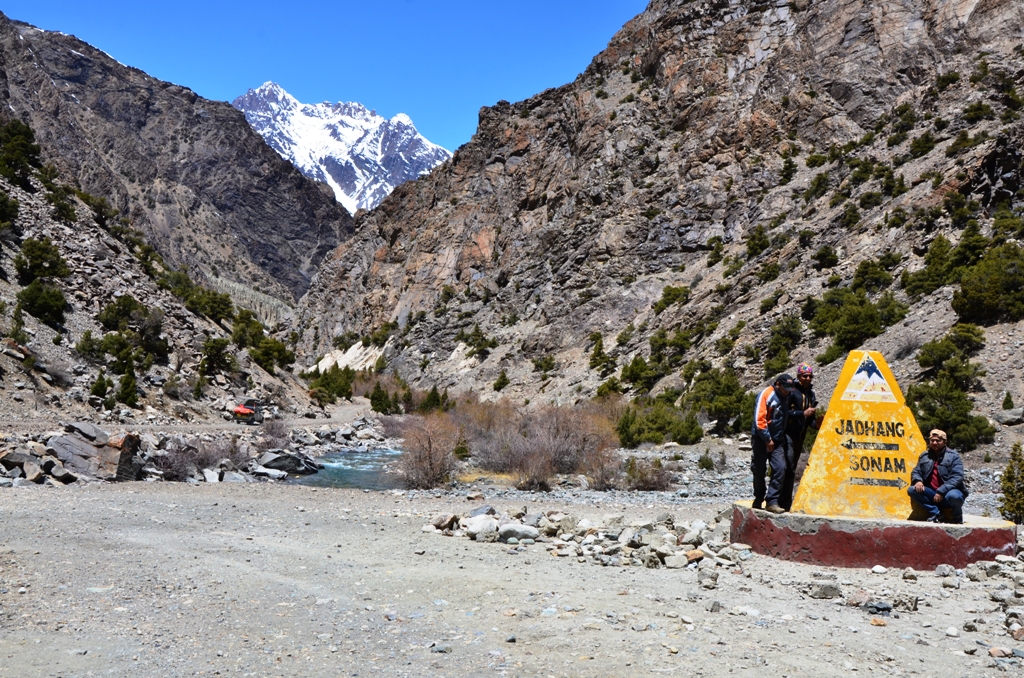 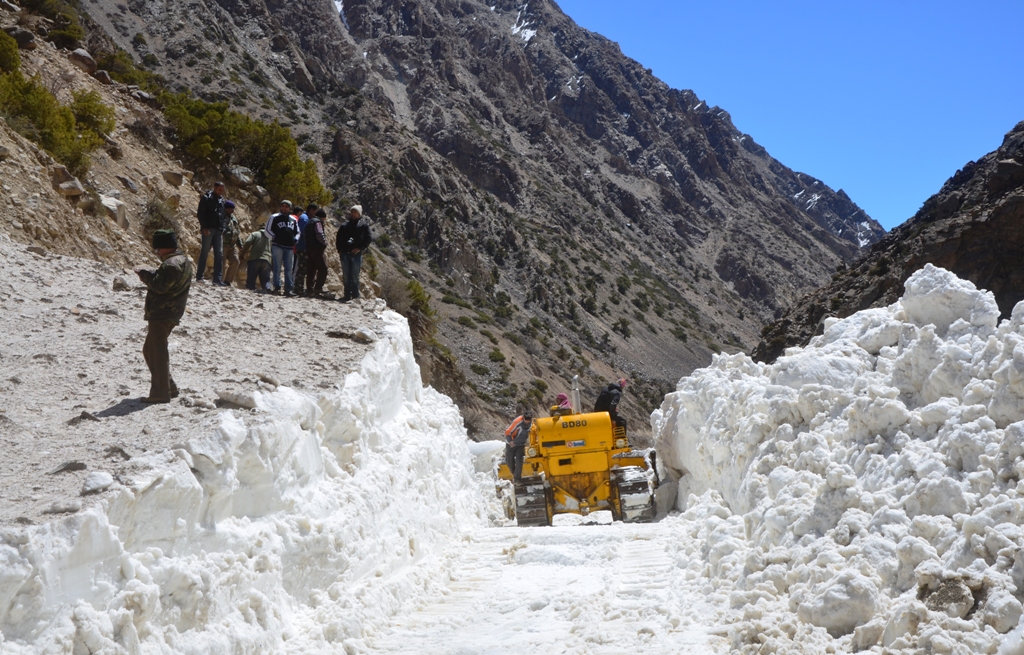 We halted by a river side and prepared lunch and deliberated that the group should move towards Gangotri for night halt. We all reached Gangotri before sun-set. We went to the temple to seek blessings of the goddess. Night was spent in a comfortable hotel. Again after Darshan in the morning we all started the return journey. While others headed towards Uttarkashi as fast as they could, we chose to take a stroll in Harshil for an hour or so before leaving for Uttarkashi to spend a night at Eagles Nest. Next day it was a dash back to home. 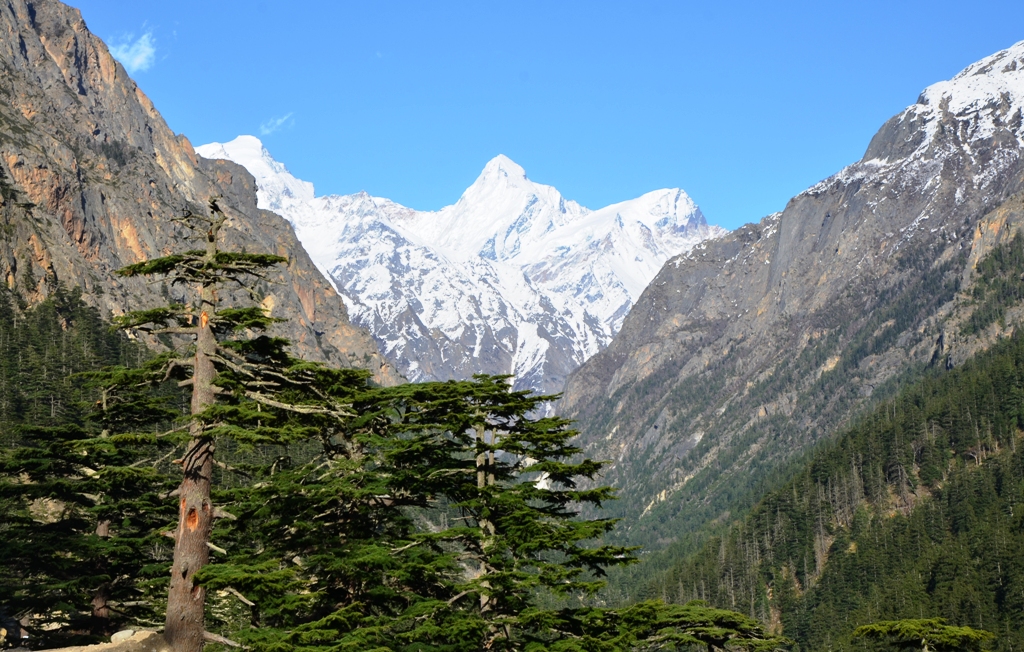 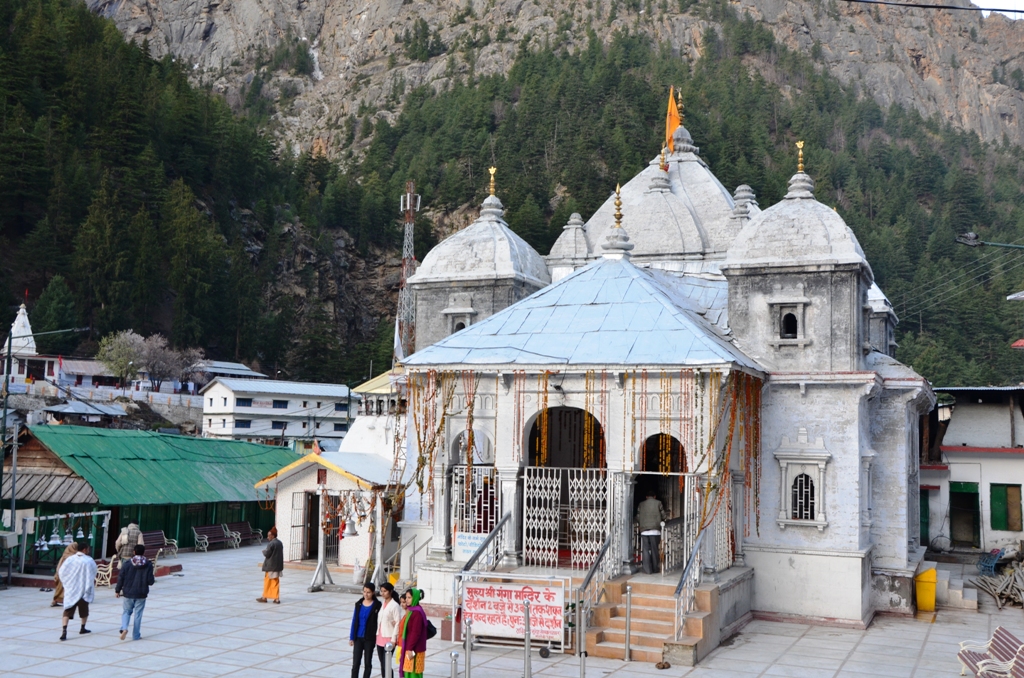 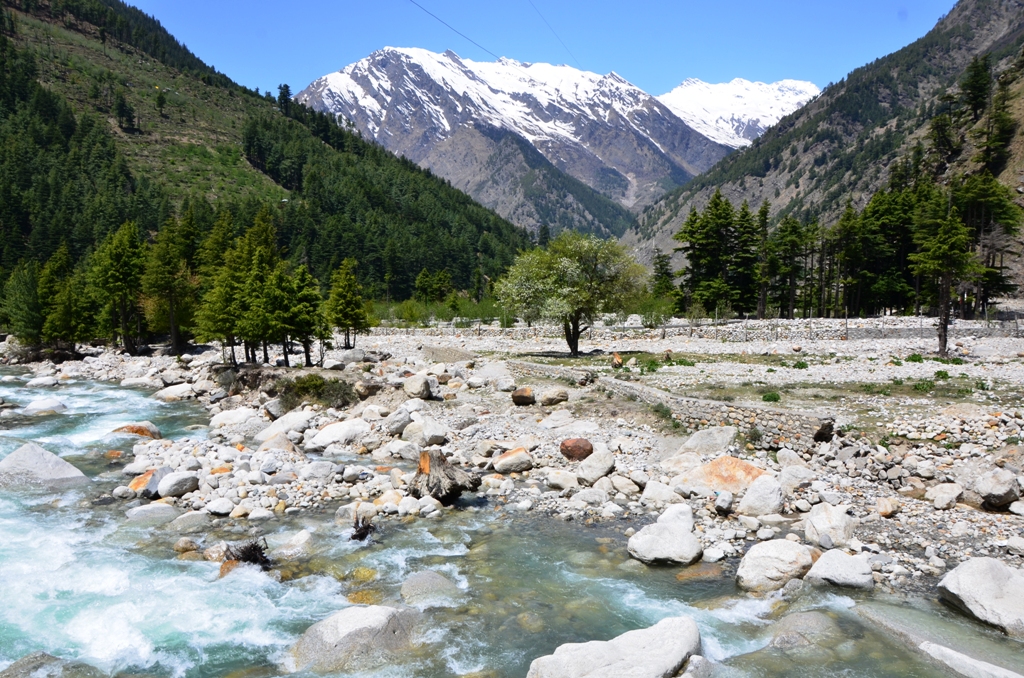 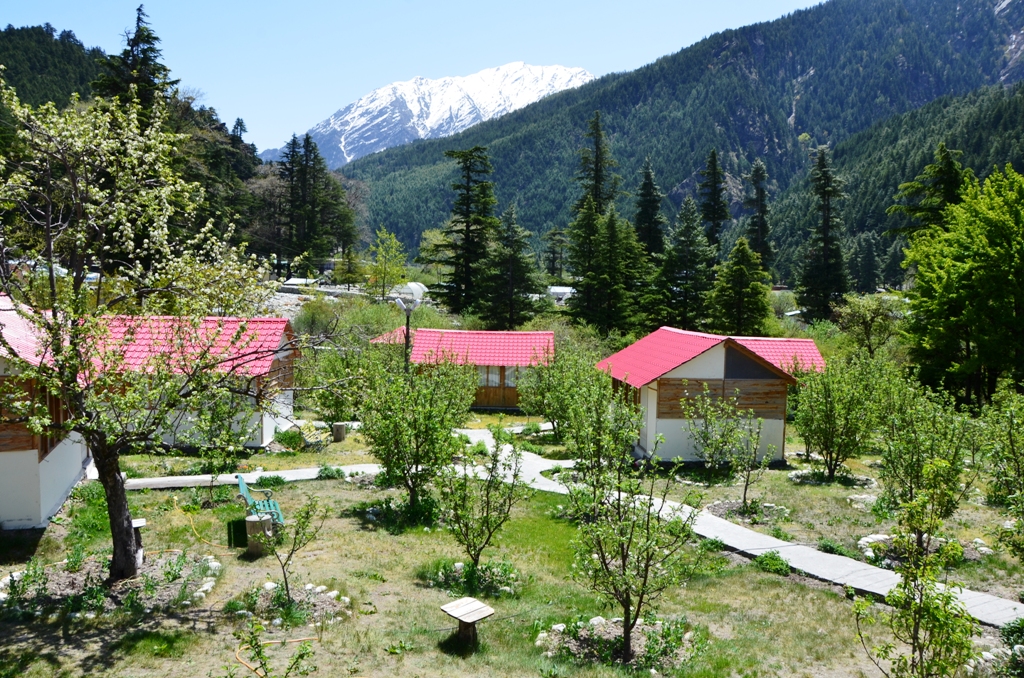 Missed the lawyer with thar.