This trip was originally planned for the first three weeks of September 2012 as I wanted to complete the trip before onset of winter. But, due to a trip to Ooty on 15/16 September 2012, it was postponed.

This was the actual itinerary of the trip:

And, this was the actual route that my Linea took during the trip: 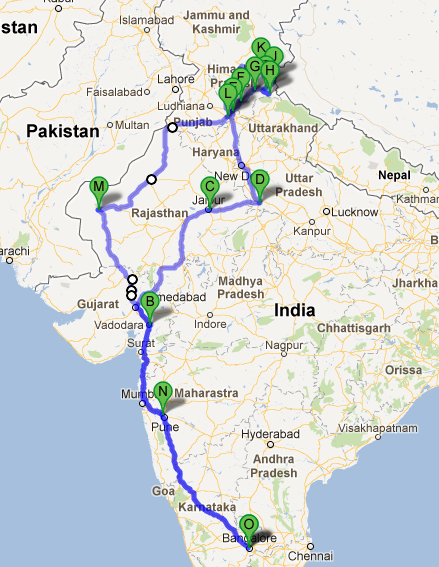 Except HPPWD Rest House @ Chhitkul and Hotel Highway Inn attached to Bharat Petroleum outlet on NH 21 near Bilaspur, Himachal Pradesh, all other hotels were selected based on the online reviews and accommodation reserved online well in advance.

Originally, I decided to start the Kinnaur-Spiti-Lahaul circuit from Shimla and return via Shimla, instead of Rohthang, in view of very bad road conditions from Kunzam Pass>Batal>Gramphoo>Rohthang. However, I changed my decision later and returned via Rohthang with more than 40 bottom-scraping thanks to the rocky, bouldery, stony track many stretches of which ran by the side of Lahaul river.

After Ooty trip, my Linea went for the fifth paid servicing at Concorde Motors, Mysore Road, Bangalore on 17 September 2012, when the engine oil was changed. However, I decided to have the tyre replacement done at Chandigarh as I wanted my Linea to step into the 50 k km mark as it was still in 49 k km at the beginning of the trip.

This was the route taken: 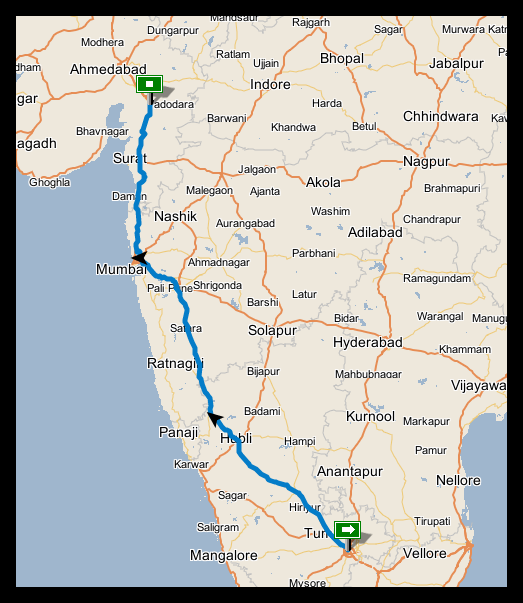 Myself and my wife started this trip in our Linea in the afternoon after lunch so that we would reach Ginger, Vadodara in time. My Linea had tankful of petrol at HP COCO outlet en route and continued the journey on NH 4. Road-widening works from 4-lanes to 6-lanes were in progress in many stretches up to Satara. 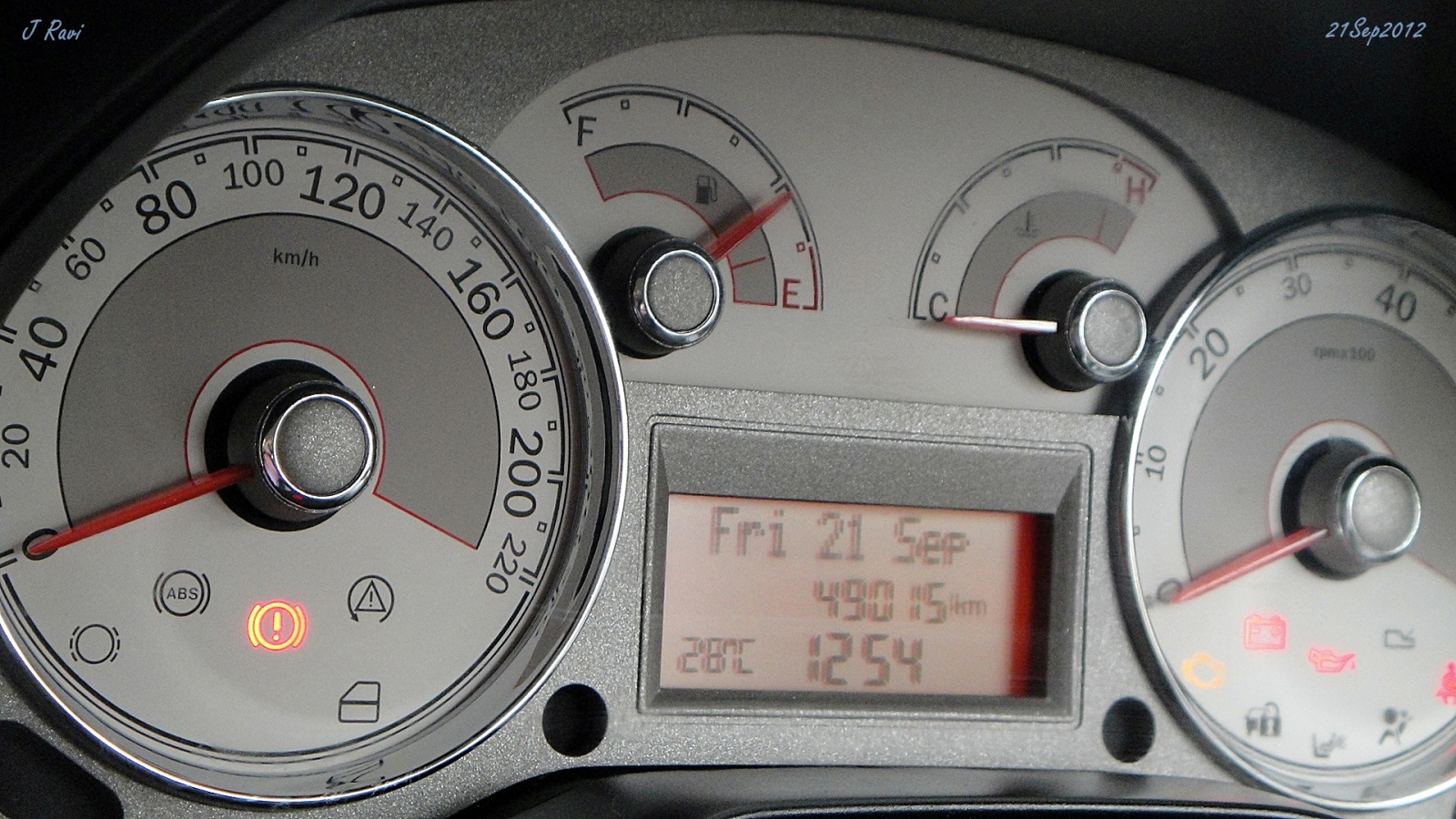 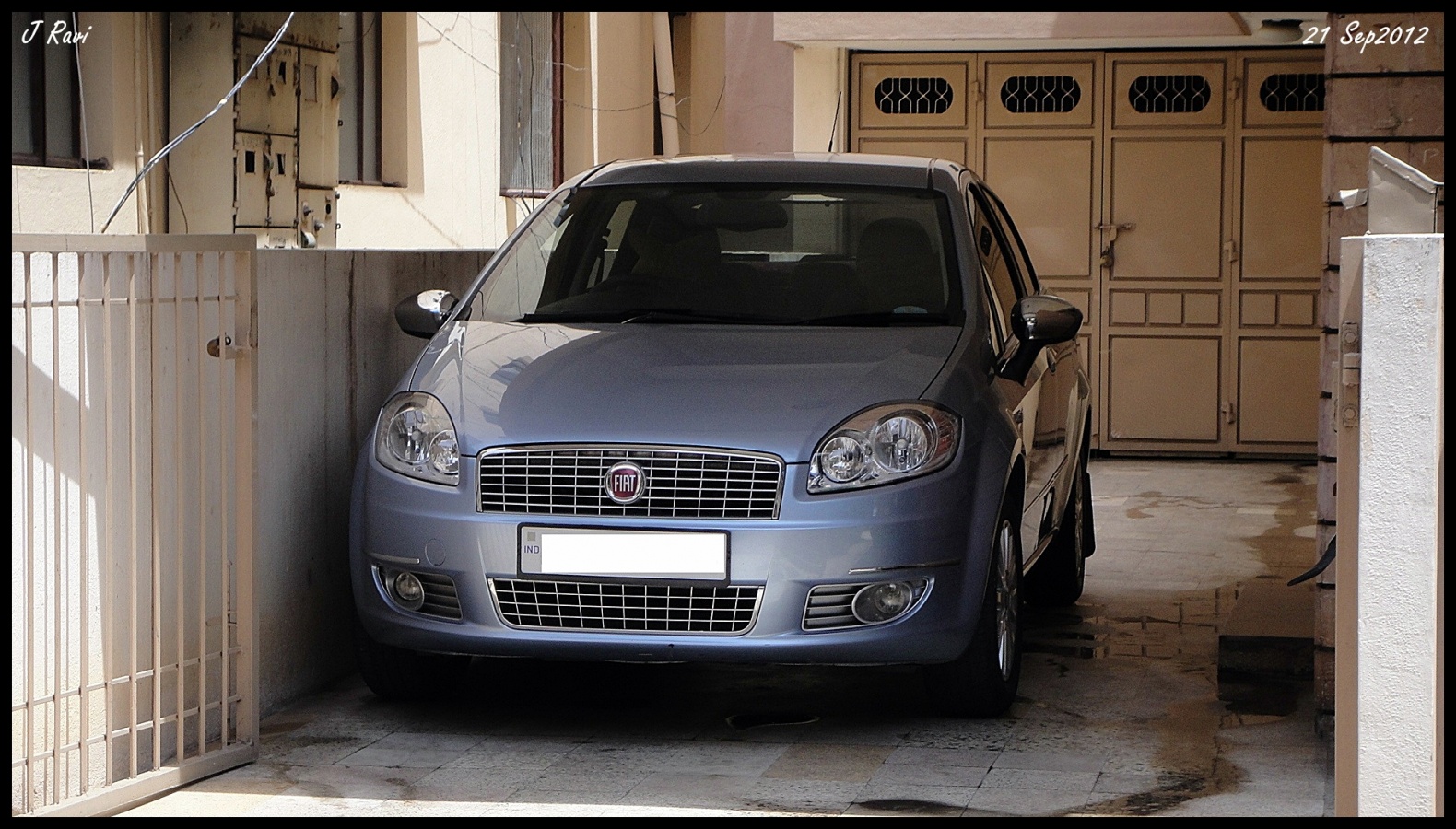 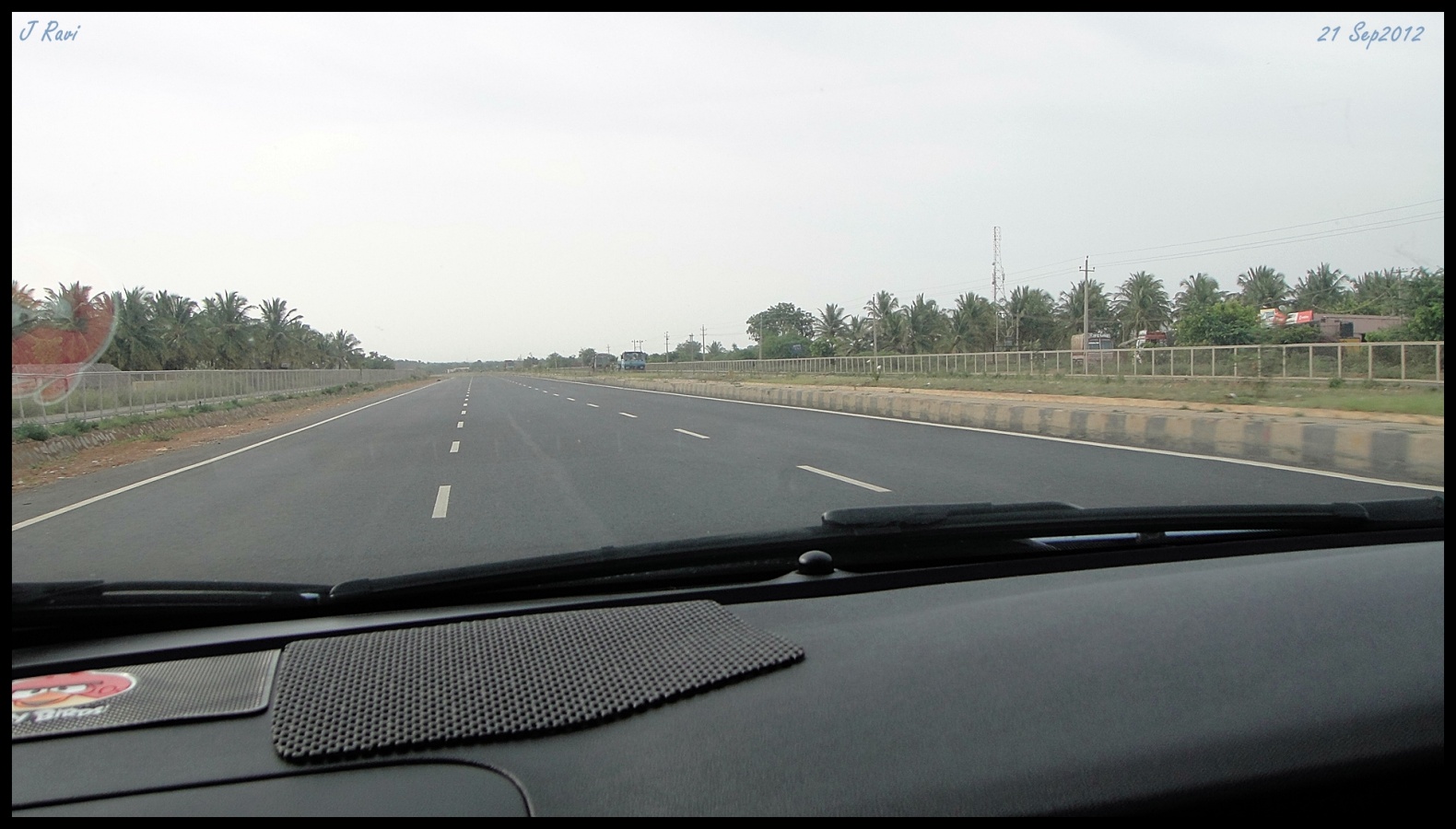 We had our sodium-vapour lamp-lit dinner comprising chapatthis and side-dish packed from home somewhere after Belgaum. My Linea had another tankful at HP COCO outlet at Kolhapur. Later, she crossed 50 k km mark. 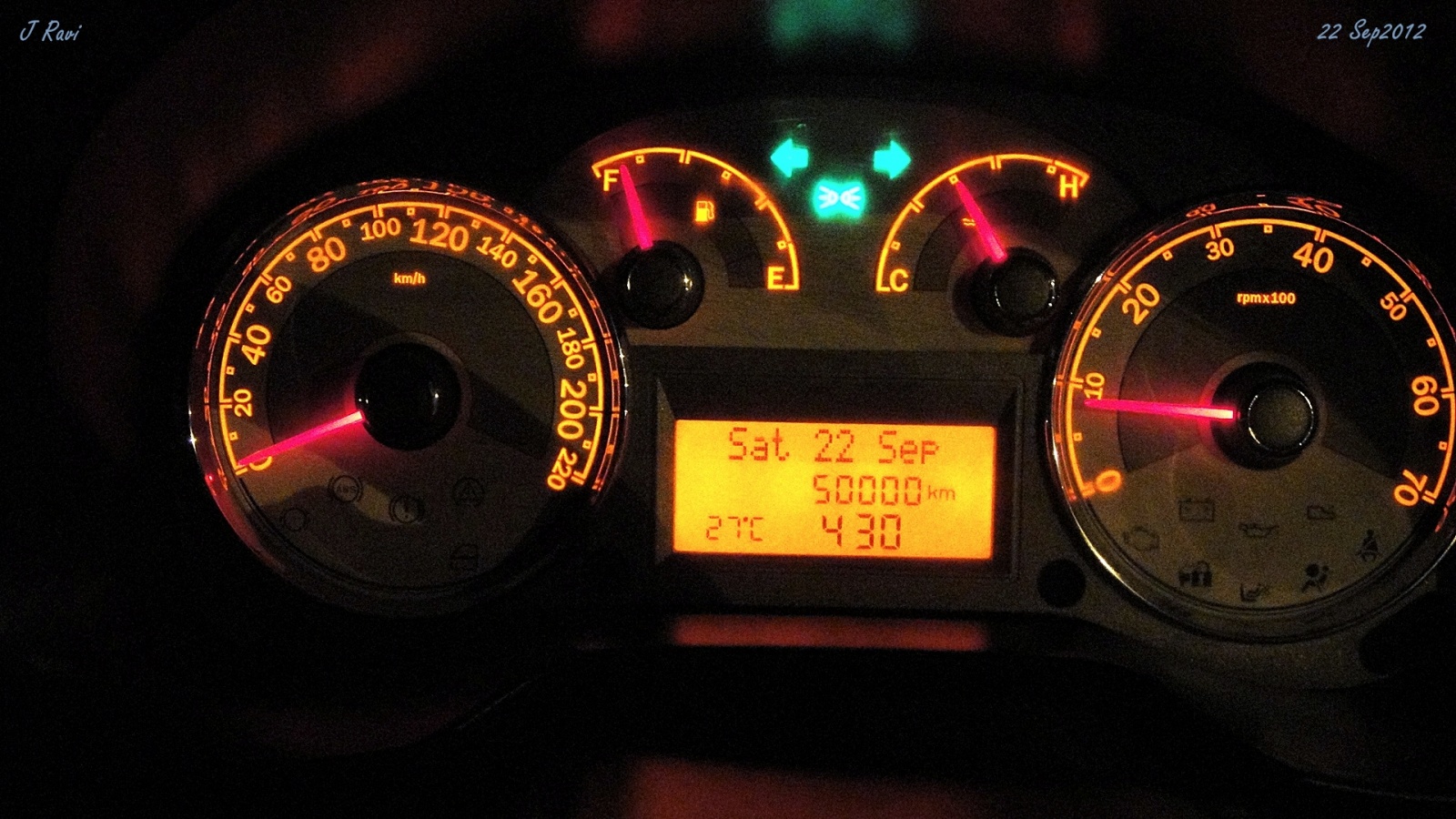 I continued my driving non-stop. After crossing Mumbai, I felt drowsy necessitating a power nap. I stopped where there were number of trucks parked at about 6 am, the next day and immediately drowned in sleep. Suddenly I heard a tap on my side of window. I lowered it. I saw two females [or transgenders?] dressed in scanty, flashy way asked me to park my Linea elsewhere. I retorted, why. Then, I realised that they were practising the world's oldest profession. One of them informed me that it was their work area and it would not be nice for aunty, pointing out my wife! My wife got wild and urged me to get out asap. With my disturbed sleep, I continued my driving until I crossed a toll plaza and had my remaining part of the power nap there! Later, we had the same left-over chappatthies for breakfast and continued my driving until we reached Vadodara. 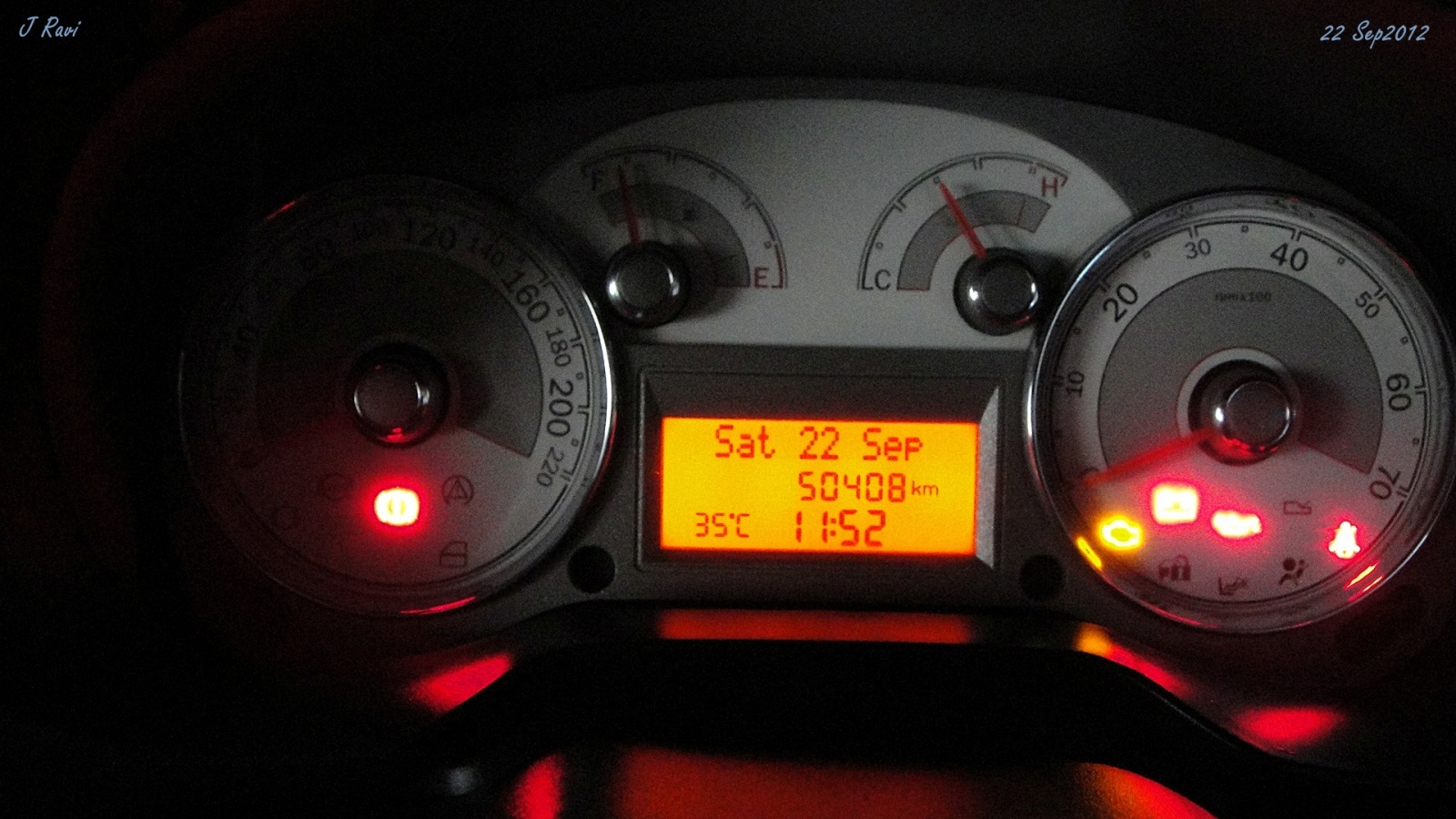 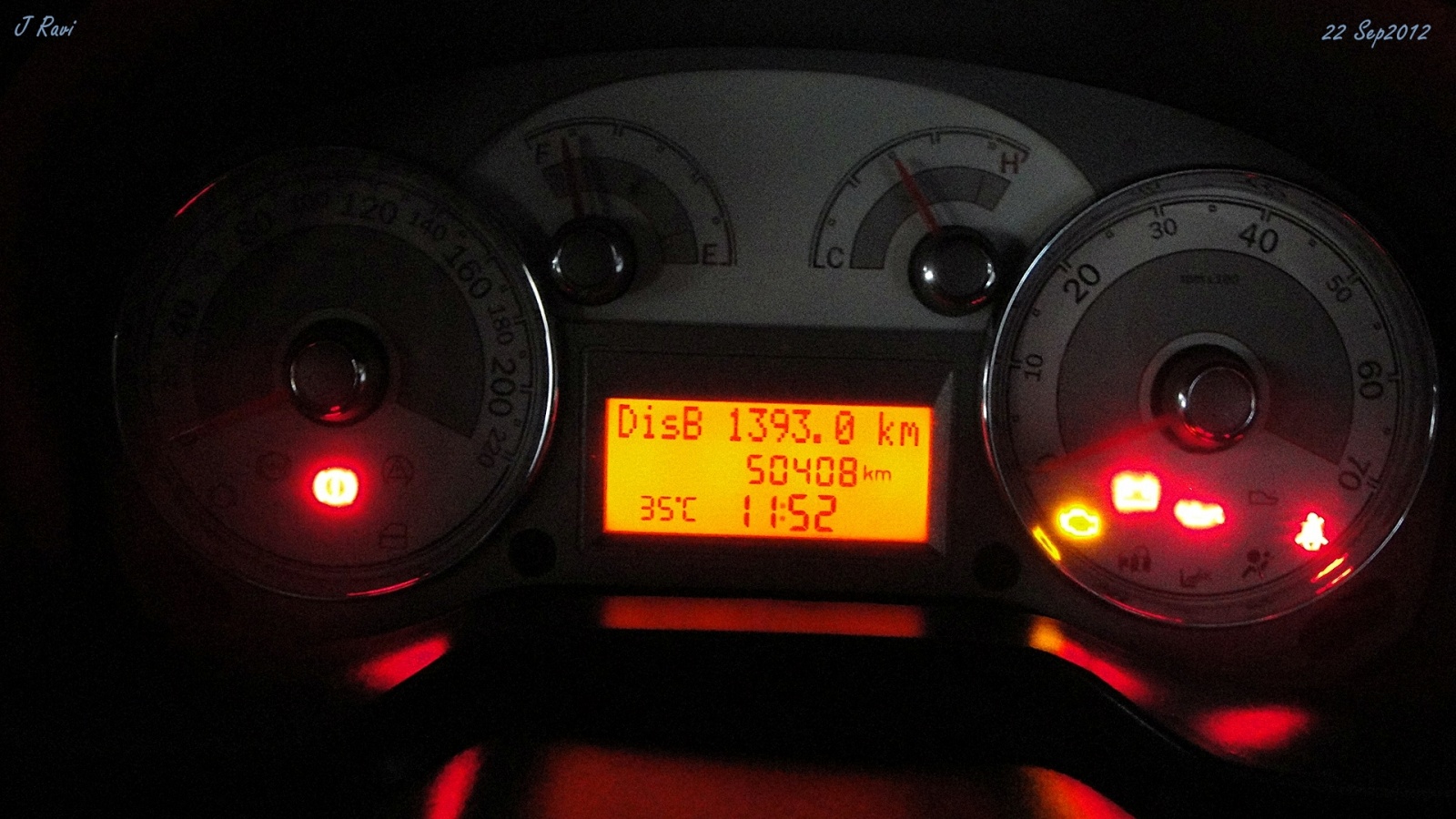 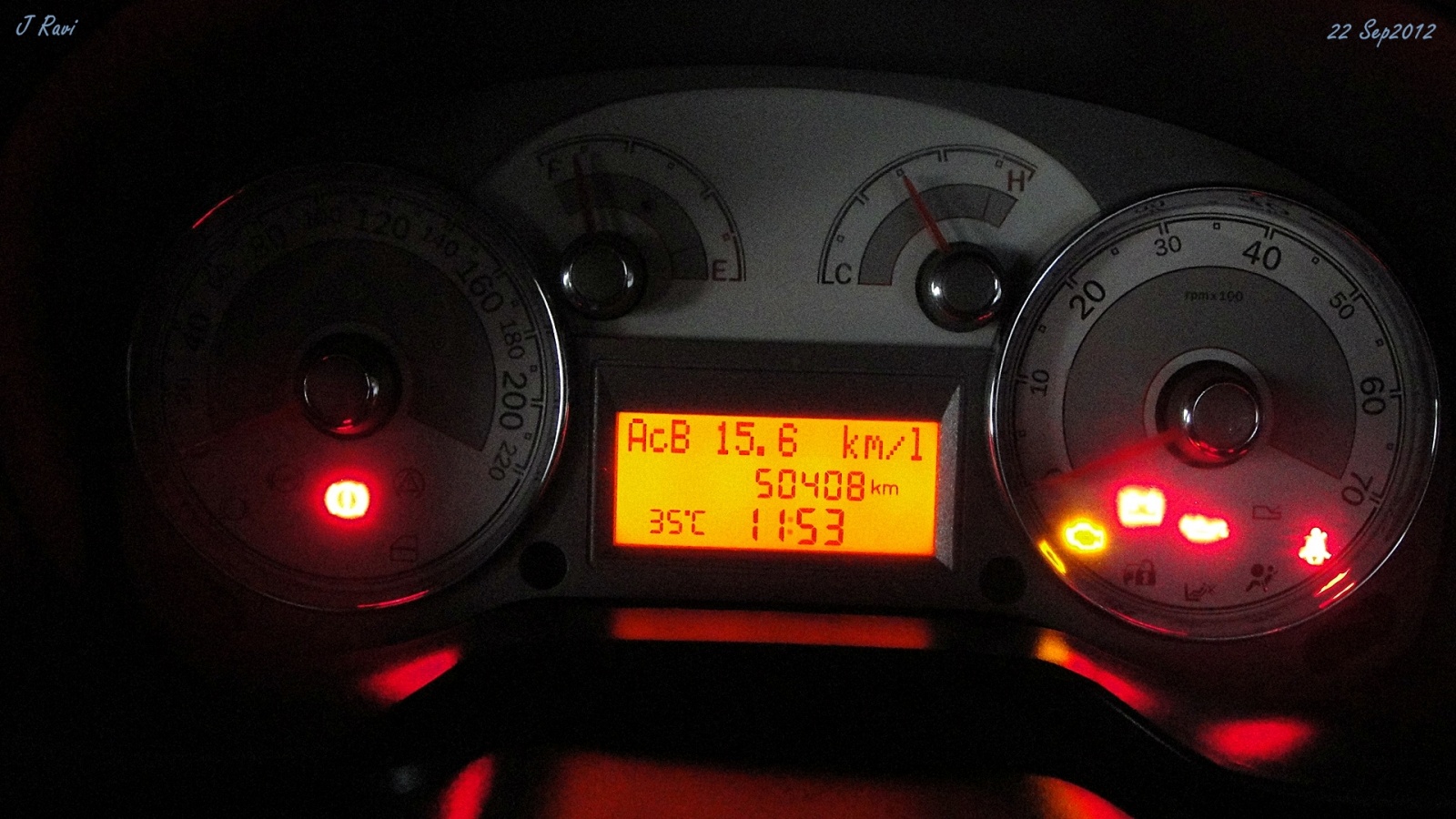 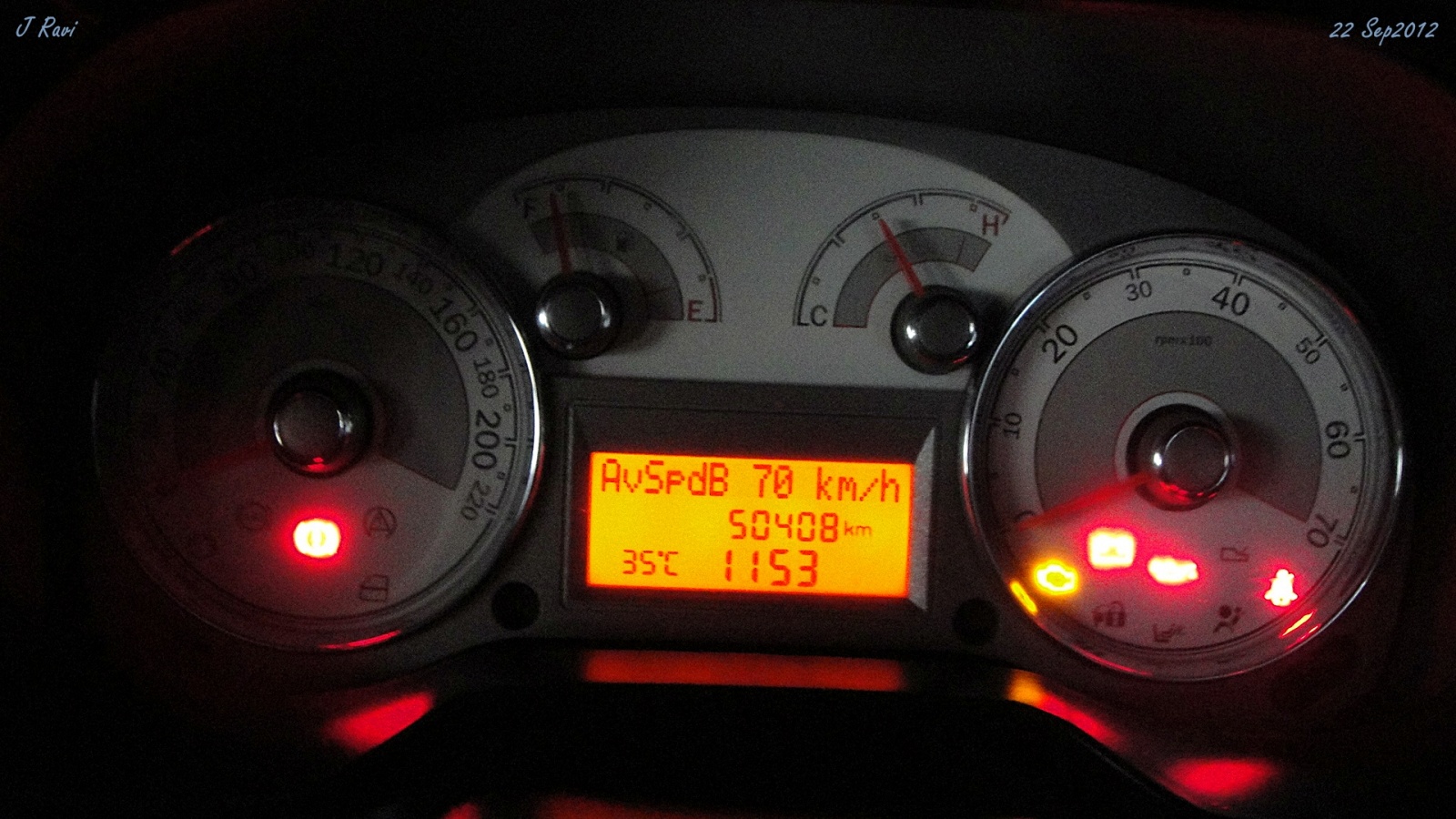 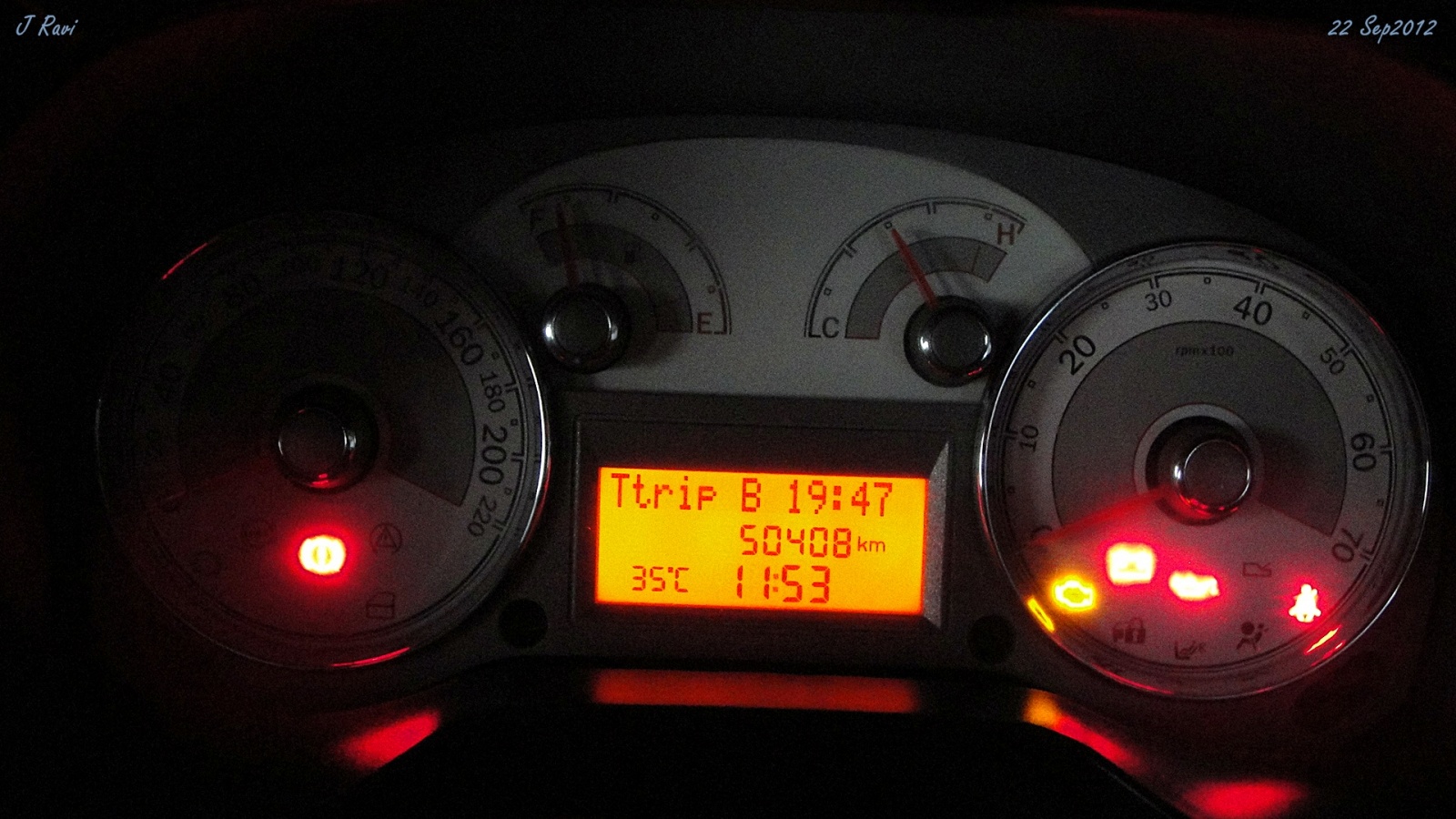 We arrived at Ginger, Vadodara well before 12 noon, the stipulated check-in time. After enjoying the in-house buffet lunch, we crashed to the bed for much-earned sleep.

i read your travelogue, leh in a linea, it was very interesting and popular travelogue, this travelogue WILL GET POPULARITY , START IS STUNNING, WAITING, HOOKED.........
M

Good Going, a promising & lovely log has to arrive, we all are waiting finger crossed. Nice way to explain the tour.

Pareesh Trehan said:
... we all are waiting finger crossed. ...
Click to expand...

No need to cross your fingers; this comes with a guarantee of excellence!

anupmathur said:
No need to cross your fingers; this comes with a guarantee of excellence!
Click to expand...

Vadodara To Chandigarh Via Yamuna Expressway

This was the route that my Linea took: 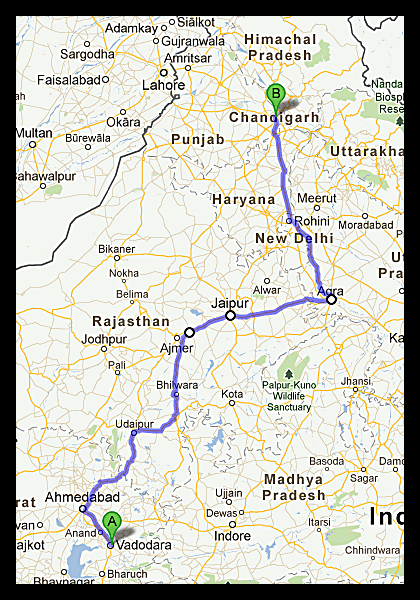 After delicious buffet lunch at Ginger, Vadodara, we checked out. I started driving to Chandigarh, my next destination via National Expressway 1 [NE1] that connects Vadodara with Ahmedabad. After paying the toll, I enjoyed driving on NE1. My joy was short-lived. My Linea started vibrating too much @ 60 - 70 kmph speed. The vibrations were felt on the steering wheel as well in the cabin. In higher and lower speeds, the vibrations were not felt. I felt bumpy ride especially on the RHS. I knew, my Linea will have to go to the authorised service station at Chandigarh in addition to the replacement of tyres. I started guessing what could go wrong, link rod, shock-absorbers or tyres. After Himatnagar, I stopped at HP COCO outlet for tanking up my Linea. At that time, I inspected my Linea thoroughly. I could not find anything abnormal. So, I decided to drive above 80 kmph so that the vibrations will be less and continued my journey. 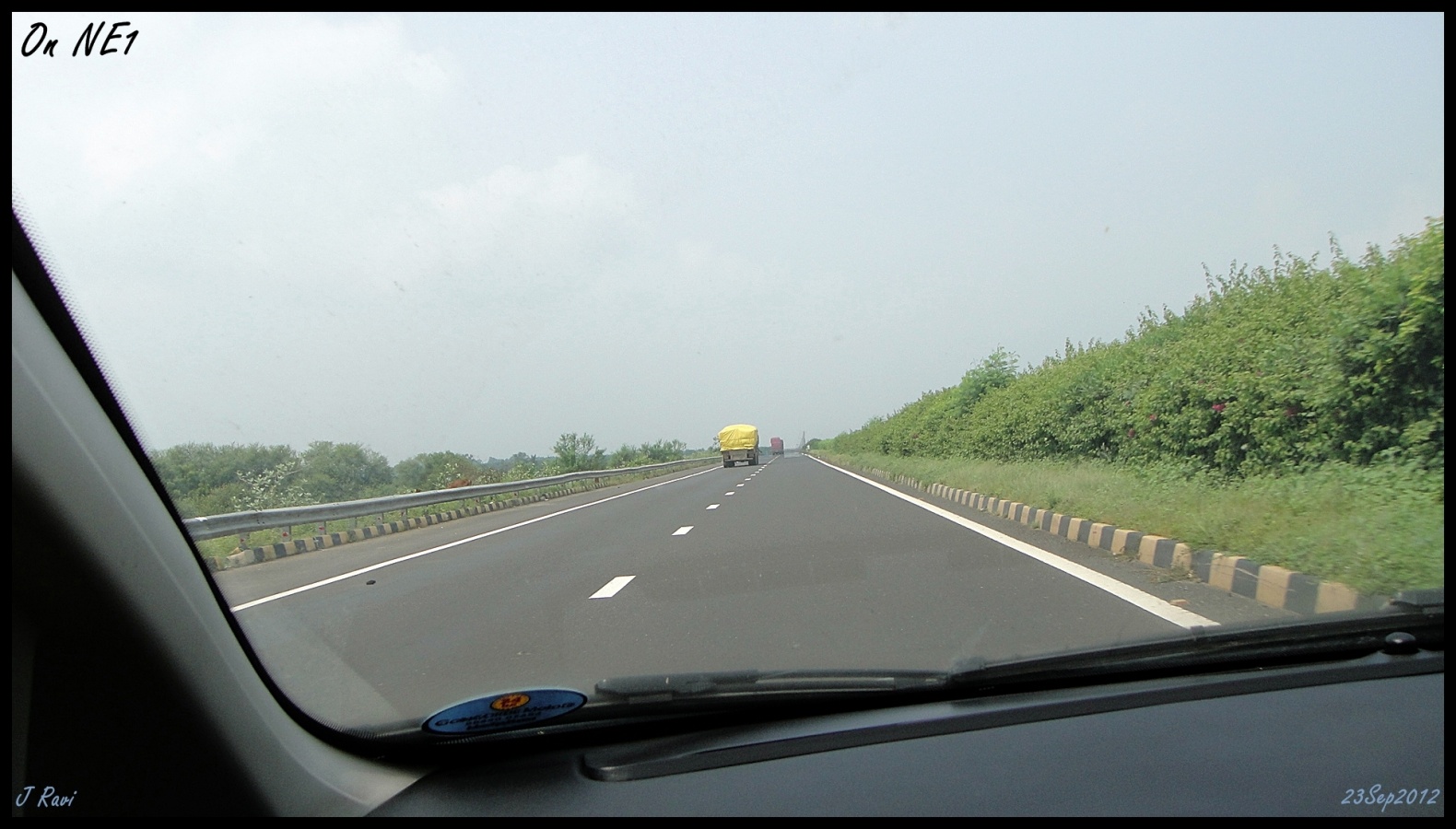 Crossing Udaipur was a painful affair. With a two-lane bypass, coupled with heavy truck traffic, my Linea was caught in a traffic jam. After that, it was a butter-smooth road all the way to Jaipur via Chittorgarh and Bhilwara with very less traffic. We stopped at BP COCO outlet with a Ghar Dhaba at Soniyana for dinner and tankful of petrol for my Linea. Again, crossing Jaipur to take on NH 11, that too in the night, tested my patience. Roads with craters greeted us before my Linea could find solace with NH 11. We reached Agra at the small hours of the day and my Linea had one more tankful of petrol there before entering Yamuna Expressway.

After entering Yamuna Expressway [YE], I felt sleepy and started yawning continuously. So, I parked my Linea at a safe place and slept. Suddenly, my wife woke me up and pointed towards a highway patrol van. When I lowered the glass, a police personnel suggested that I sleep at the nearby toll plaza. So, I drove up to the next toll plaza and took a power nap there. Later, after a cup of hot tea, I continued my driving on YE. Most of the tarmac comprised concrete with a rough finish so as to ensure good road grip. Again, my joy of driving on YE was short-lived: my Linea started making some weird sound from the RHS in addition to vibrations.

A kind-hearted gentleman in MS SX4 overtook my Linea and pointed out to my Linea's front right wheel. I stopped and checked. I could not find anything abnormal. But, my Linea's vibrations plus sound continued unabated. I continued driving, but slowly. 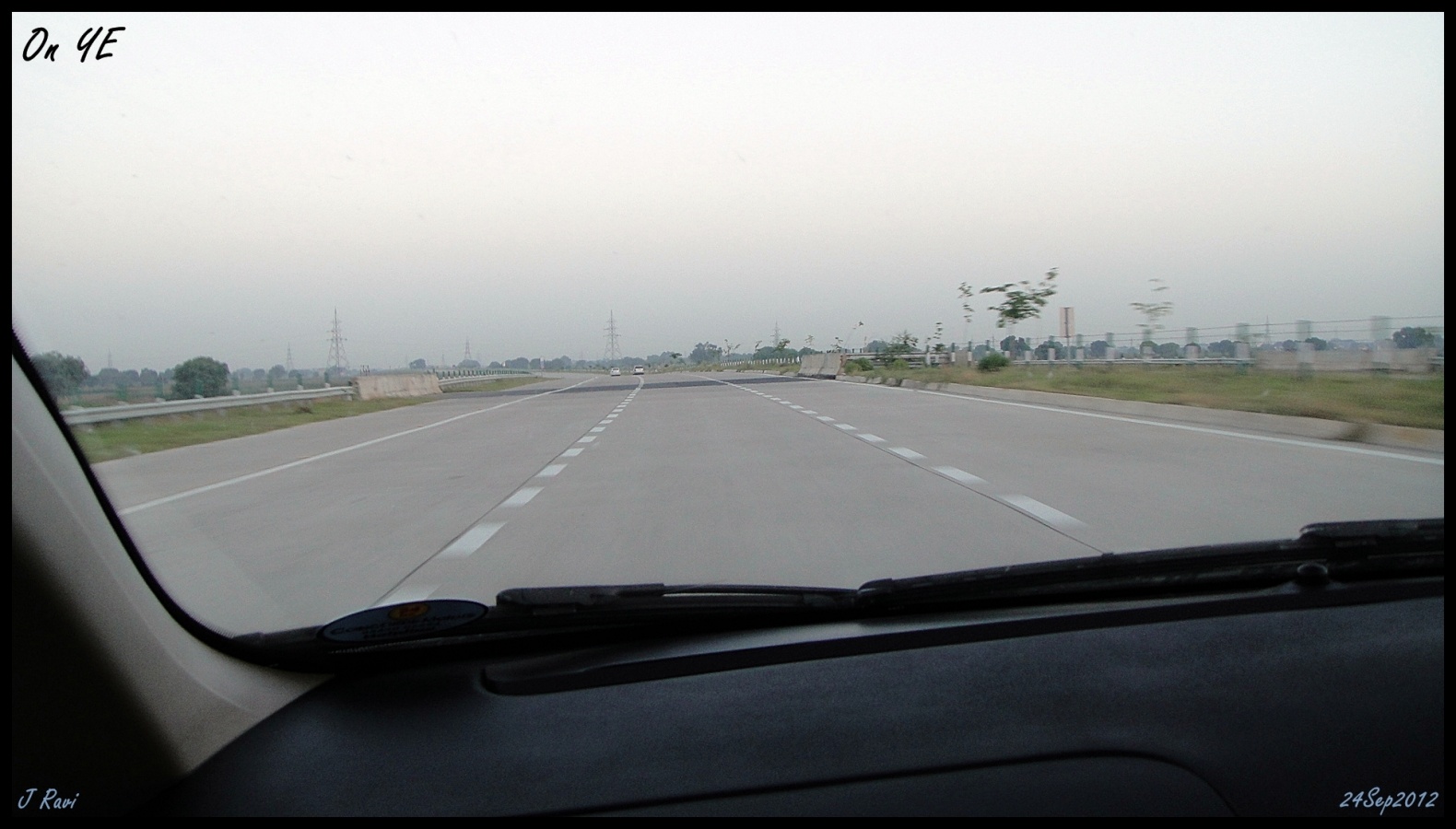 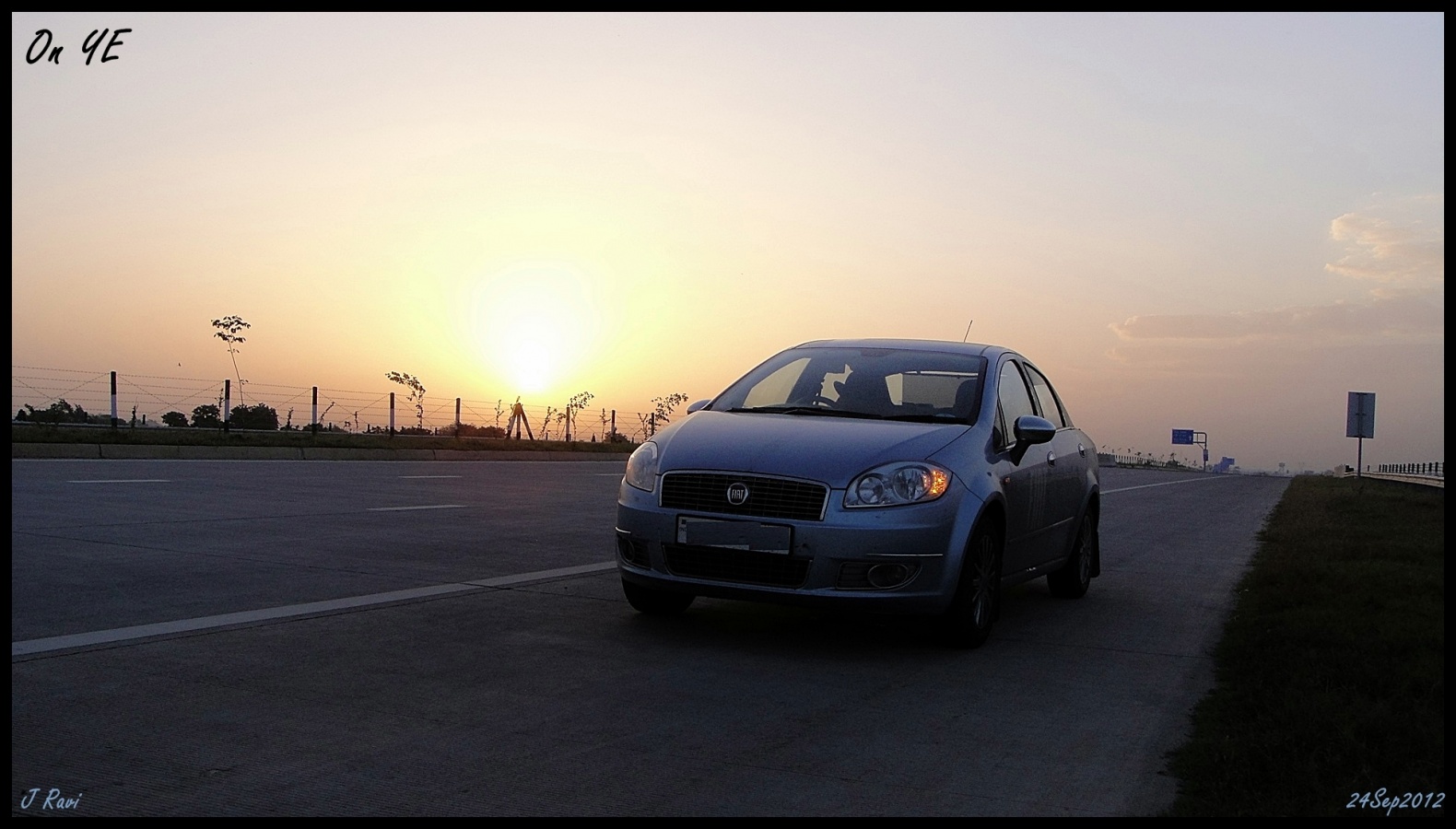 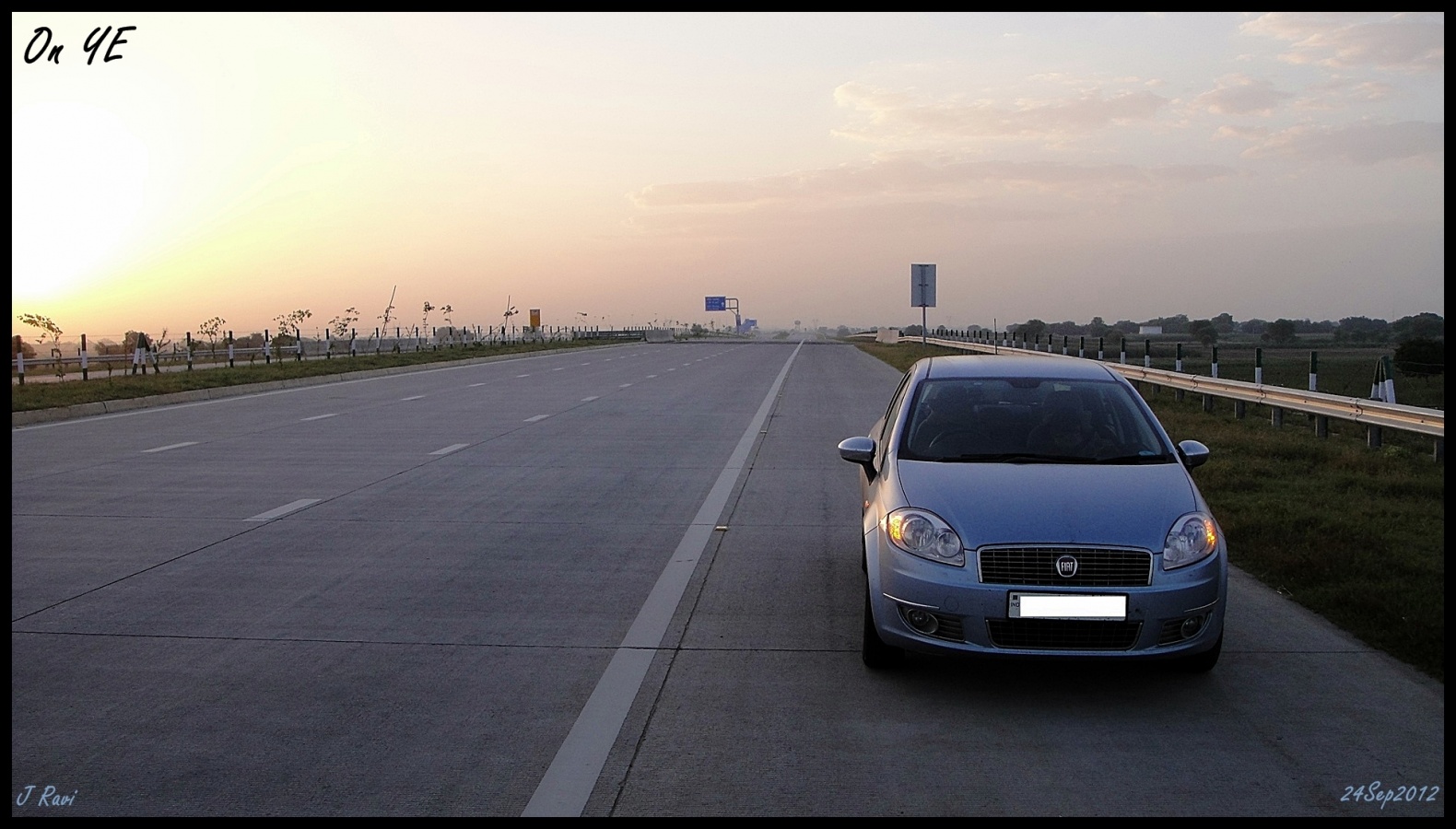 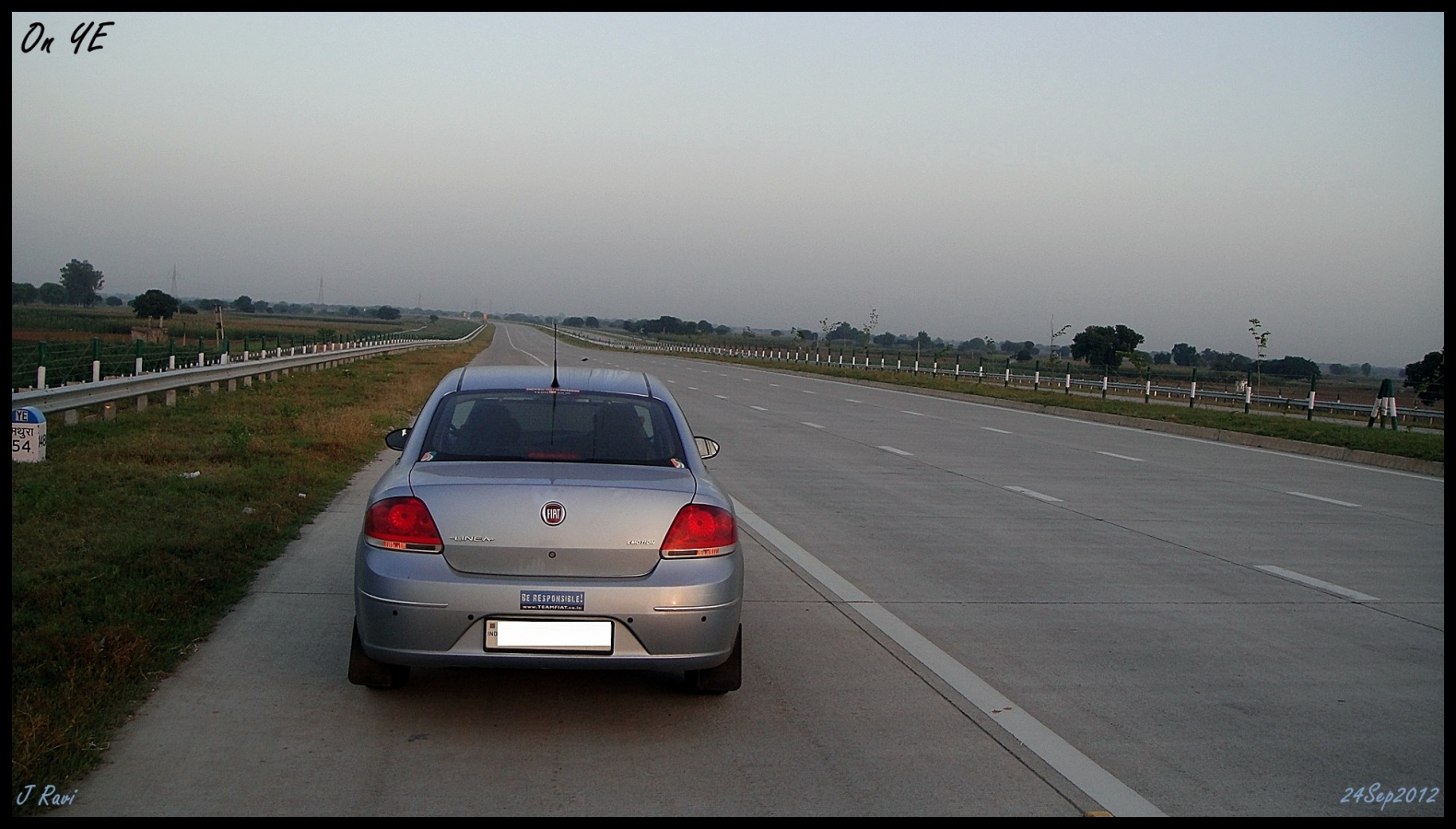 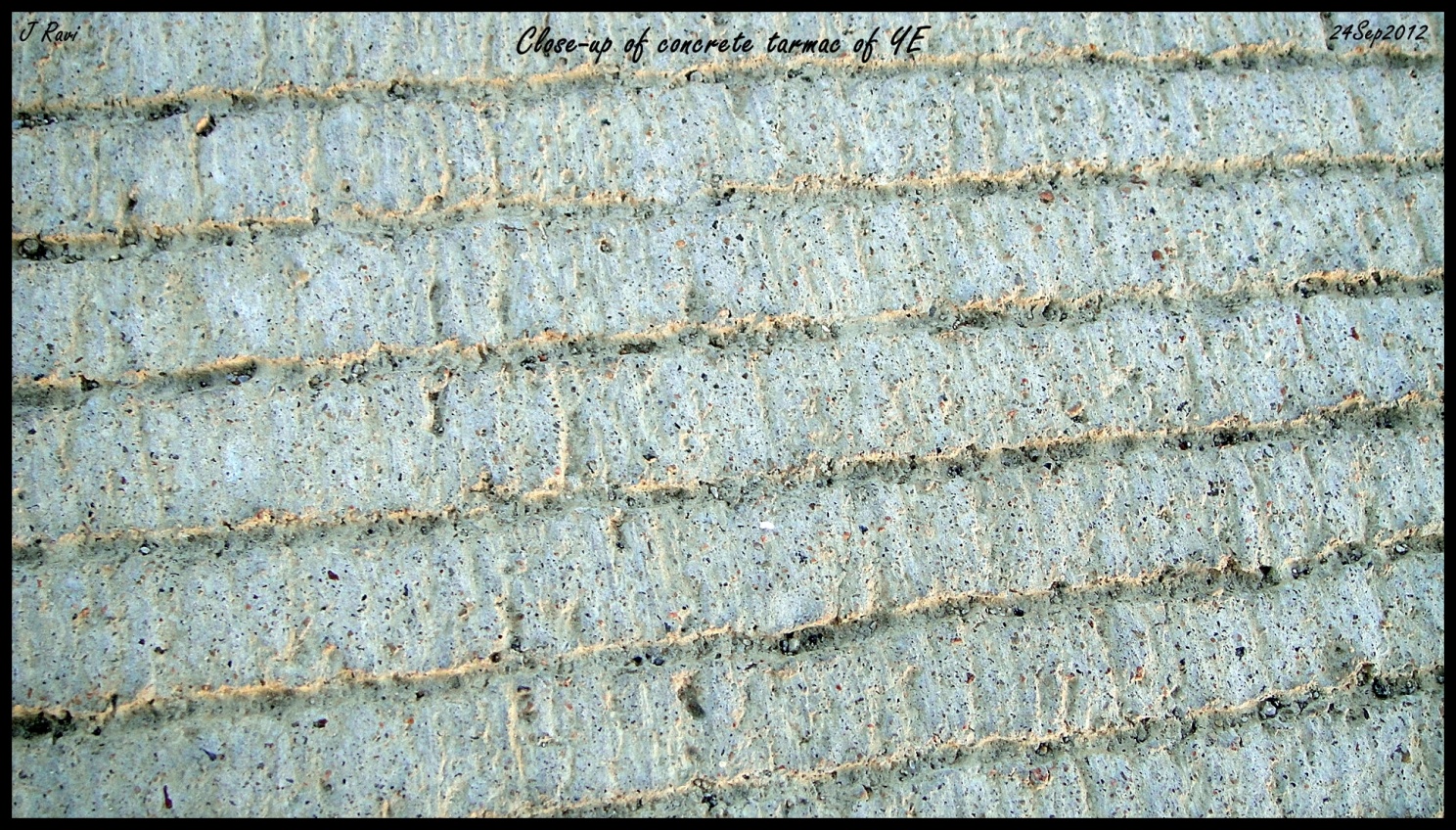 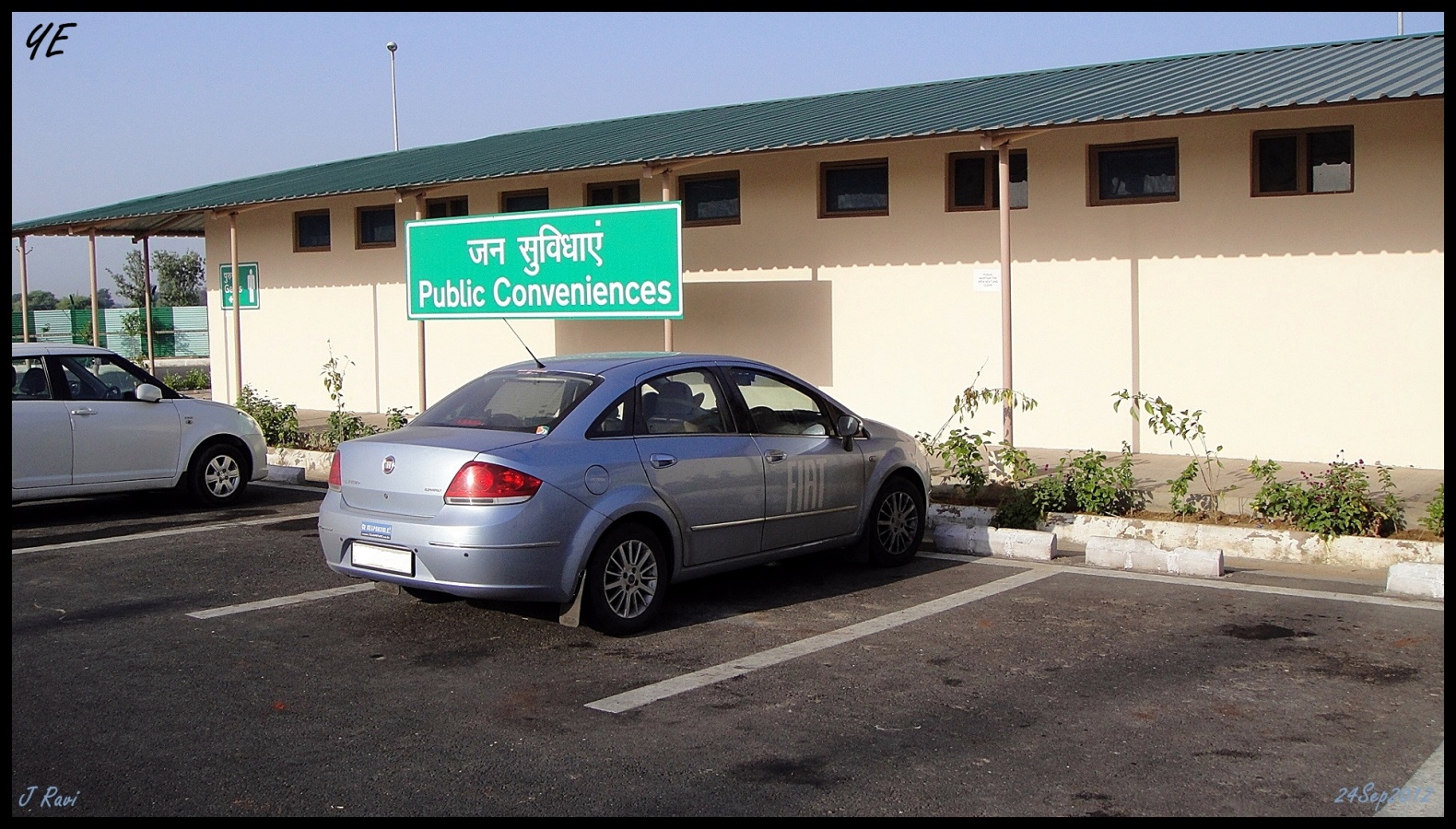 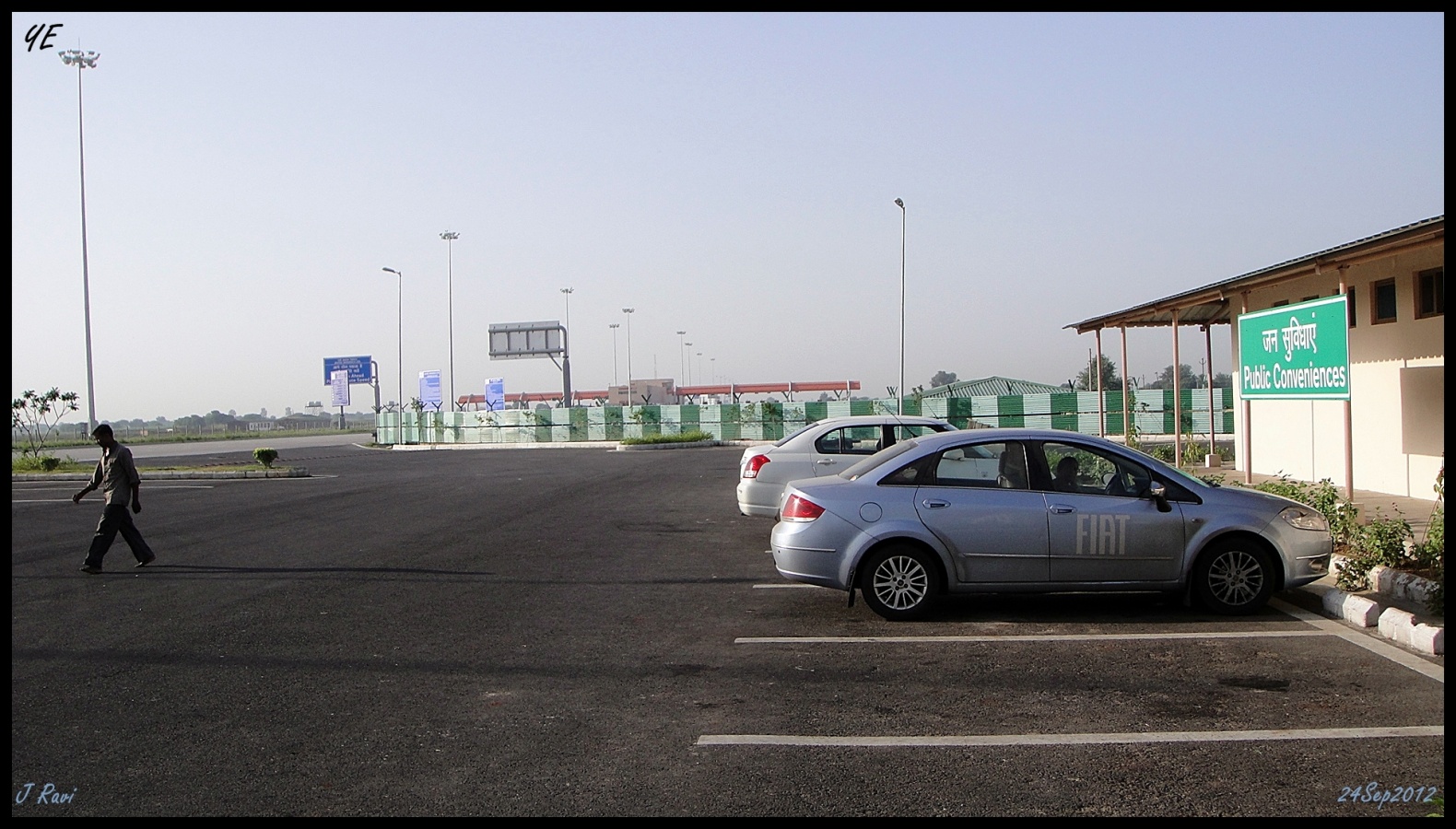 My Linea entered Delhi in busy peak hour traffic. After bypassing Delhi in bumper-to-bumper traffic, my Linea entered NH1. We decided to have an early dinner as we didn't have breakfast in the morning. We stopped at Pehalwan dhaba at Murthal on NH1 and had sumptuous lunch after completing our morning ablutions. By now, the sound was also gone. Only vibrations remained in my Linea. 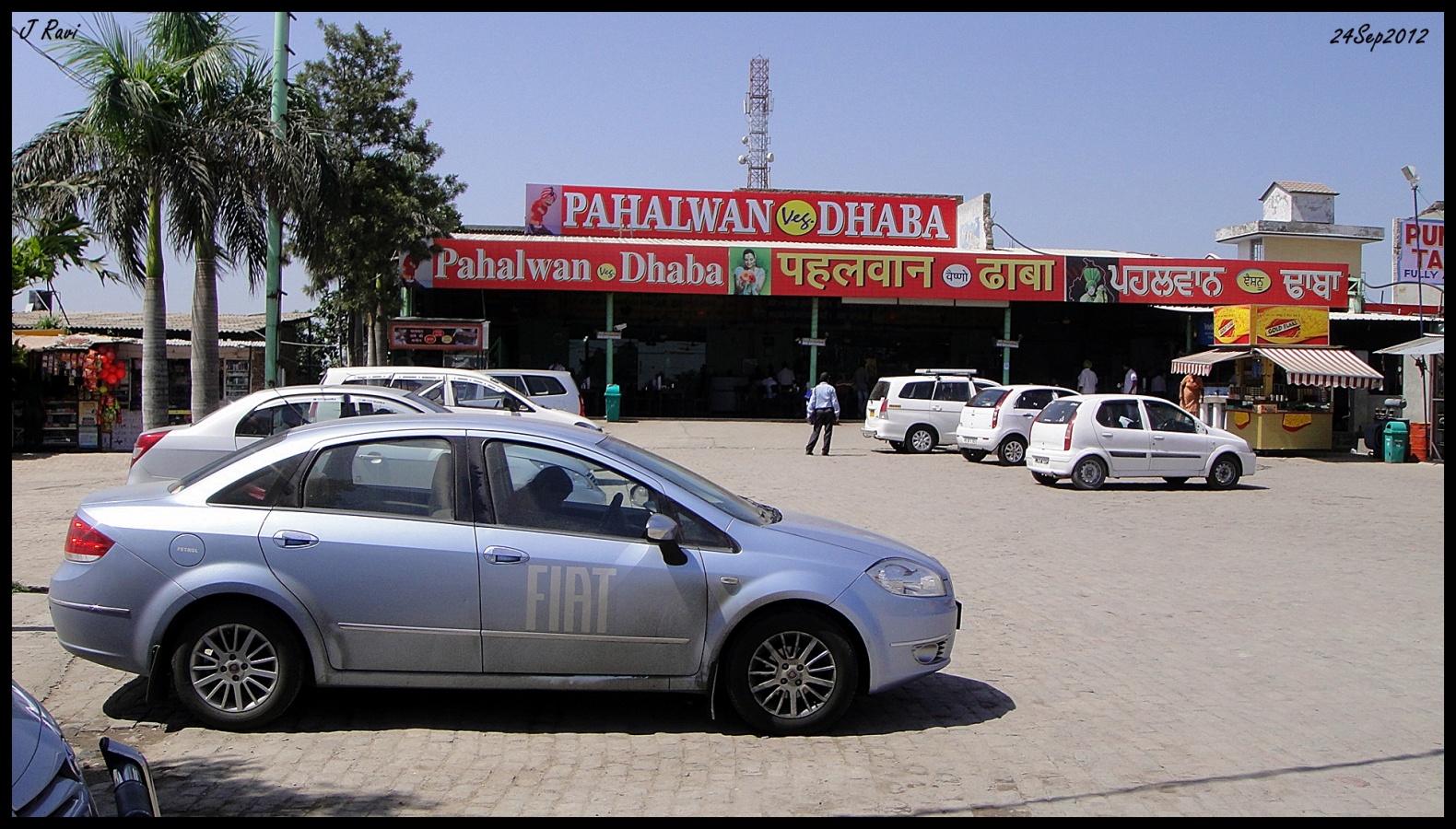 I continued my driving cruising at 80 kmph on the left lane of NH1, crossing Sonepat, Panipat and Karnal. Suddenly, I heard a loud bang.

My wife, who was enjoying a siesta after a good meal, froze. My Linea dragged towards the left. I knew, it was the front right tyre burst. I brought my Linea to halt on the extreme left of NH1. Thankfully, there was very less traffic on NH1 at that time of the day. I got down and inspected. Yes, it was the tyre burst with more than a foot of tyre opened up on the tread portion including sidewall, exposing metallic mesh beneath the rubber layer.

I replaced the front right wheel with the spare steel wheel, which consumed more than half-hour and continued my driving towards Chandigarh. After driving for some distance, my wife observed that with the change of tyre, both the vibration and the sound were gone! Then, I realised it was so. I tried different speeds: my Linea was back to normal without any trace of vibration or sound. So, was the burst tyre culprit? I don't know the answer.

We reached Hometel, Chandigarh, checked in and crashed to the bed for well-earned rest. 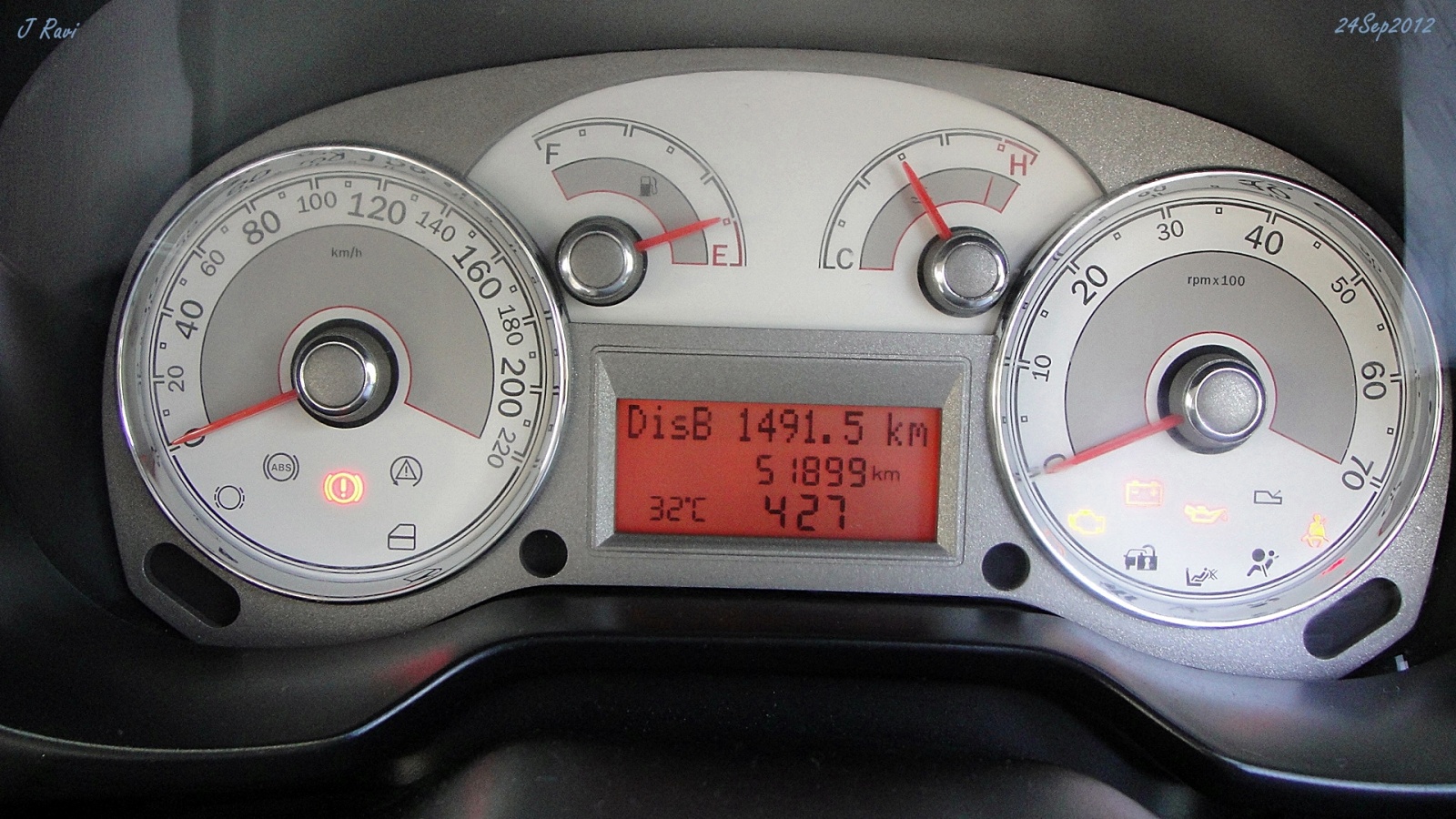 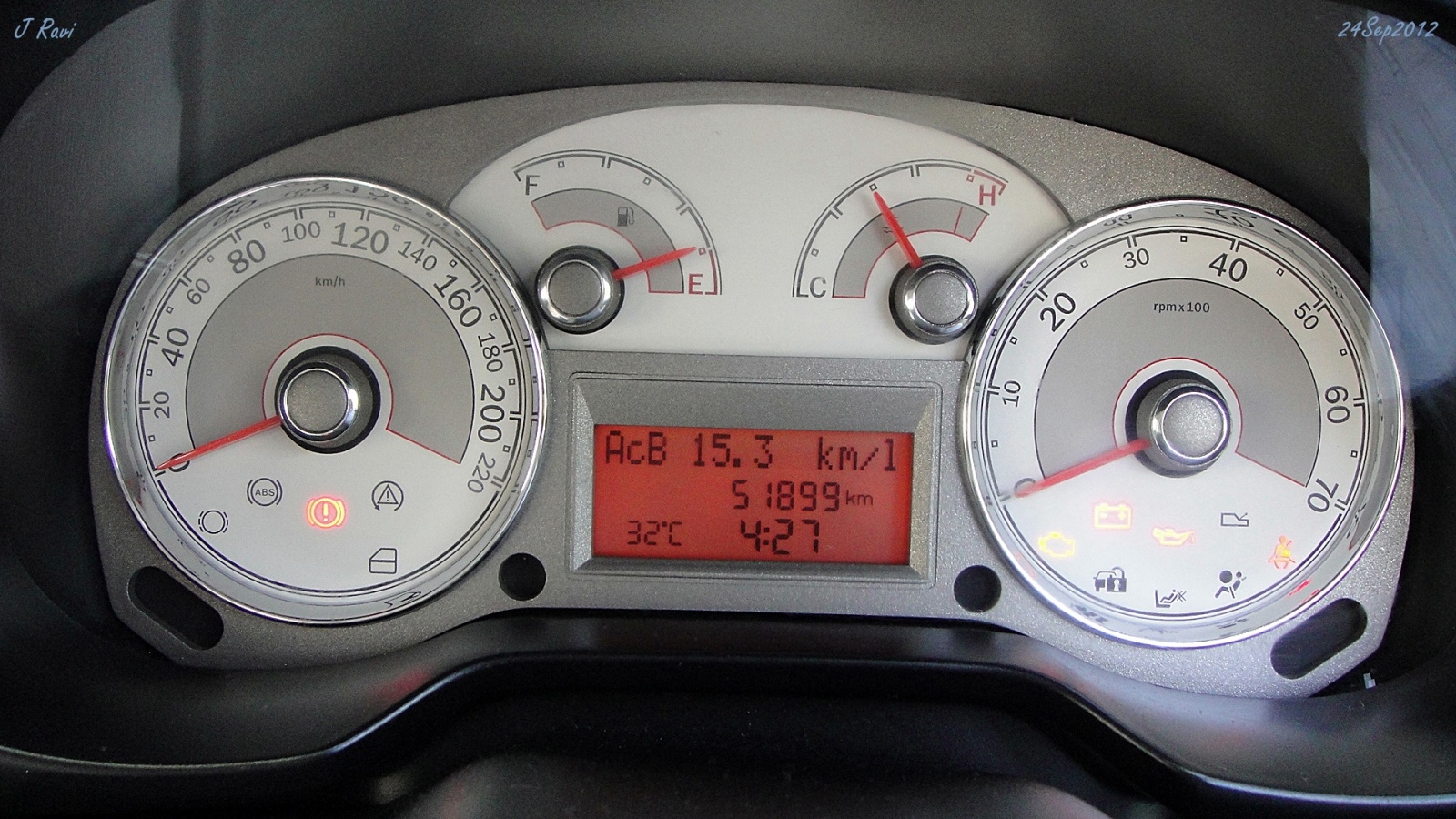 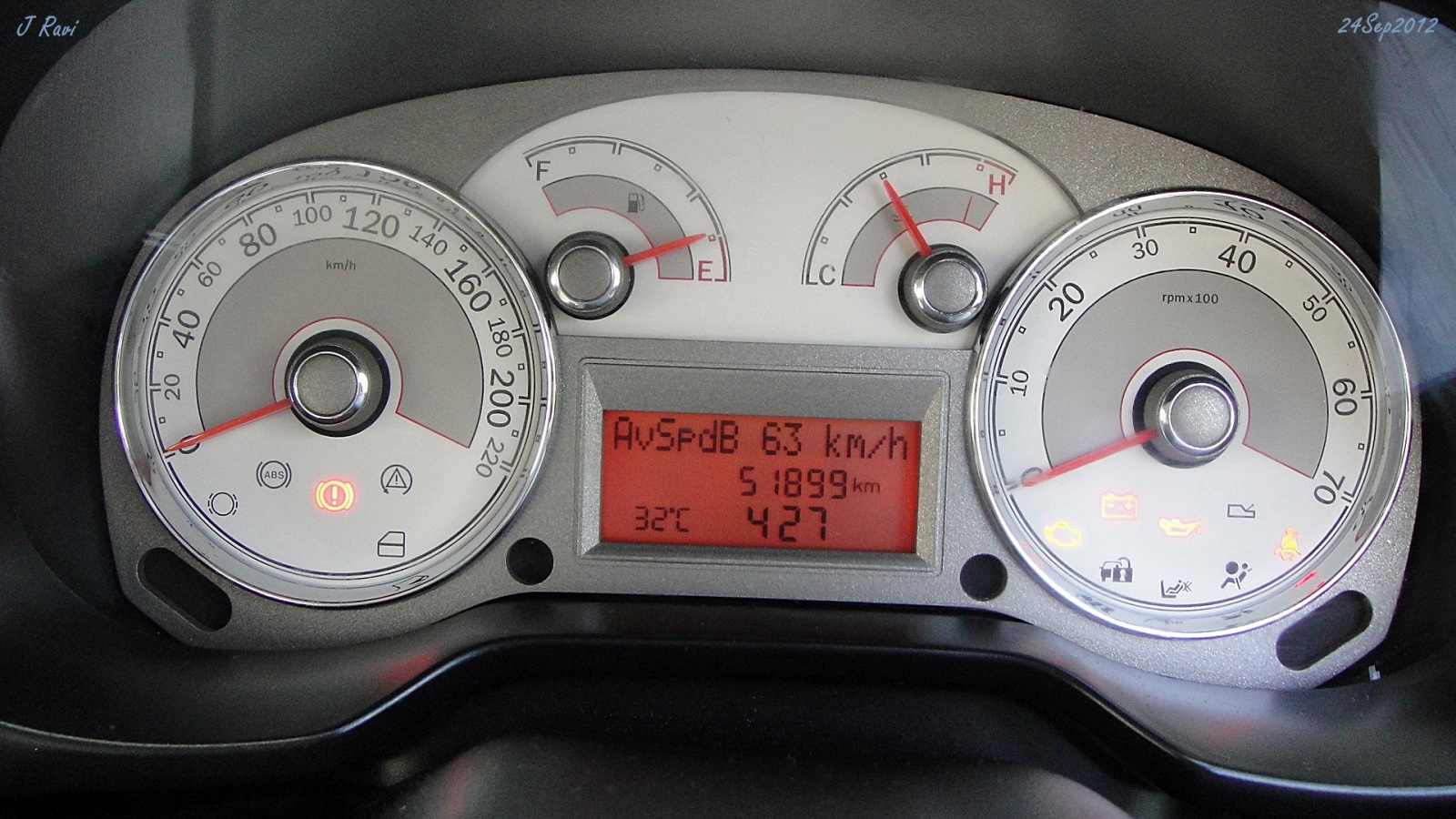 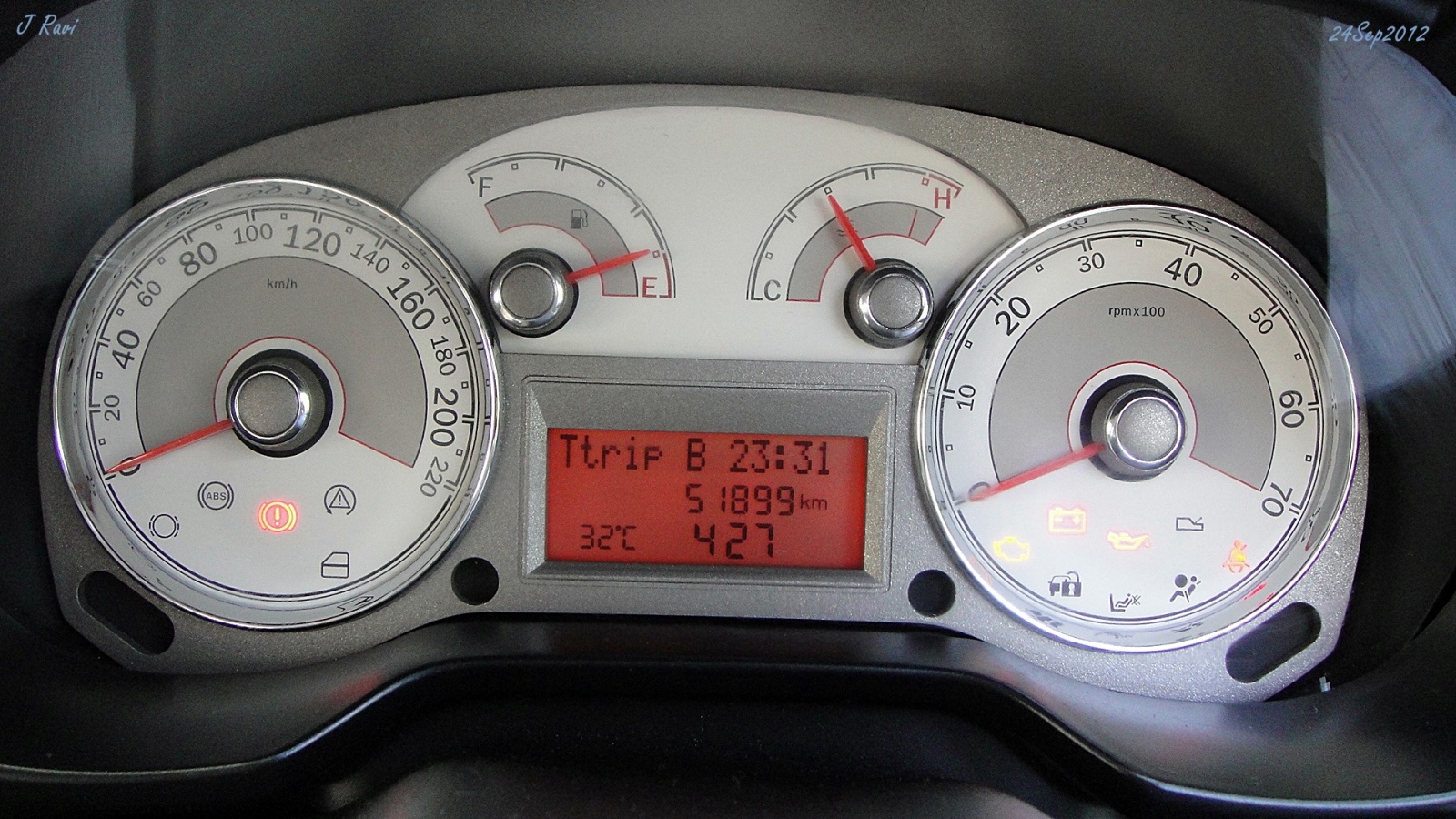 hats off to you sir..what a drive..awesome
how was the road and traffic condition from jaipur to agra ?

classicrajat said:
how was the road and traffic condition from jaipur to agra ?
Click to expand...

While NH 11 is 4-laned toll road from Jaipur up to RJ-UP border, it is 2-laned in UP up to Agra. The Jaipur bypass from NH 8 to NH 11 is still under improvement. The approach road to NH 11 in Jaipur is full of craters.
You must log in or register to reply here.
Share:
Facebook Twitter Reddit Pinterest WhatsApp Email
Top