Hotels in hills are facing problems in continuing business due to many legal issues.
As seen in last year. there is good development in hills. All types of hotels & stays
are there and building bylaws are overlooked mostly.
Authorities can anytime take harsh measures resulting in closure of hotels.
This is affecting tourism.
There are many news seen from time to time.
Please post here whatever news you get.
Last edited: Feb 27, 2018

The Himachal Pradesh State Electricity Board (HPSEB) enforced a raid on hotels in Mcleodganj on Friday after hints of many hotels using the government power supply illegally. There were around 140 hotels in the locality whose power supply had been cut following orders of the High Court however the board found that most them were still functioning.

Executive Engineer, HPSEB, Ajay Gautam said they had acted on the complaints that some hotels, whose power supply had been snapped, were using power illegally. Three hotels were raided and it was found that one hotel had guests too. Cases of theft would be registered against the hotel owners who were using power illegally, he said according to the report in the Tribune.

It was reported that most of the hotels were on those buildings which had adjoining commercial shops which were not deemed illegal in the previous rulings. However, the hotels were using power from these shops to light up their building and function normally. The board is now going to slap cases of power theft against the hotel owners for using power illegally.

In move from the government to provide relief those hoteliers who have lost their power and water supply due to illegal constructions, it is planning to seal the unauthorized portions of their buildings from functioning while the approved functioned will be allowed to function as usual. Till then it is reported that these buildings will remain sealed. 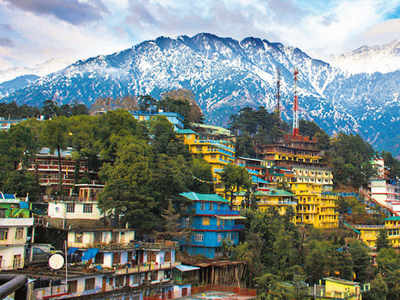 DHARAMSHALA: Strong action by the National Green Tribunal(NGT) in Kasauli is causing a ripple effect in McLeodganj, where hoteliers are facing the heat for violating construction norms. Apparently, for the first time, power and water supply to 10 prime hotels in the area has been disconnected. The civic bodies have a list more than 70 properties of the area which have violated norms.
Dharamshala municipal commissioner Lalit Jain said that apart from the 10 hotels, more than 60 others are under their lens. On an average, the civic body issues orders against two properties daily after thorough scrutiny.

"We have ordered disconnection of power and water supply to the hotels that had done constructions in violation of the norms," said Jain. Hoteliers were told to deposit the approved maps by town and country planning department, completion certificates, and clearance certificates from the state pollution control board but they have failed to do so.
Earlier this year, the state government had brought in a regularization policy, under which all commercial and personal properties that flouted the construction norms would have escaped punishment by paying some compounding fee. However, the policy was stayed by the Himachal Pradesh high court.
Many hoteliers in McLeodganj have constructed five- to seven- storey buildings, endangering the ecology of the area. However, no action at this scale was taken against them in several years.
In Kasauli, the NGT had issued notices to 72 hotels. Recently, it ordered six of them to demolish the illegal parts and slapped fine ranging from Rs 5 lakh to Rs 15 lakh on seven hotels in all. The NGT had also fined some government officers for laxity. Cases of rest of the hotels would come up soon.

After the High Court order, the district administration of Kangra today snapped water and power connections of 55 illegal hotels in McLeodganj and its surrounding areas.


A team, constituted by the district administration, including officials of the Electricity Department, IPH Department and Revenue Department, reached hotels. Officials did not receive any resistance from hotel owners and executed the court orders.


Most hotels that lost power and water connections were located either on the Jogibara road, Temple road in the heart of McLeodganj or the McLeodganj-Bhagsunag road.


Most of the illegal constructions in McLeodganj and its surrounding areas came up after the Congress government announced its retention policy to regularise 100 per cent deviations from the approved maps. Most hotel owners rushed to add rooms to their existing structures to take the benefit of the policy.


With so many hotels losing power and water connections, it is going to be tough for the tourists during Christmas . The hotel owners said they had to cancel all bookings for Christmas.


Since 55 hotels have been lost water and power connections, about 1,000 people are likely to lose jobs, sources said.


A section of hoteliers also demanded action against the officials of the MC, Town and Country Planning, Power and IPH officials who allow a large number of illegal hotels to come up and flourish in violation of rules.


Most illegal constructions in McLeodganj and its surrounding areas came up after the Congress government announced its retention policy to regularise 100 per cent deviations from the approved maps.


Tourism to be hit

The Himachal Pradesh High Court has ordered the Dharamshala administration to shut down 55 hotels and establishments running illegally in Dharamshala and the surrounding areas of McLeod Ganj and Naddi, and directed authorities to disconnect electricity and water supplies to the hotels.

Most of the affected hotels are in McLeod Ganj, on Jogiwara, Temple, and Bhagsu roads.

About 1,000 people of the affected hotels may lose their jobs as a result of the closures.

On Saturday, the district administration of Kangra cut water and power connections of the 55 illegal hotels.

A public interest litigation (PIL) petition dealing with the issue of degradation of environment in Dharamshala had been filed with the Court.

The Court then directed the Regional Officer, Pollution Control Board (PCB), to inspect the hotels of this area and file his report before the court.

The division bench, comprised of acting Chief Justice Sanjay Karol and Justice Ajay Mohan Goel, then passed the order to shut down the hotels.

In 2016 the Himachal government had passed the Himachal Pradesh Town and Country Planning (Amendment Bill) 2016 to approve irregular structures on “as is where is” basis. The government decided to forego the existing norms and provide for regularisation of buildings on nominal charges which were raised without government sanctions.

After this policy was announced, many hotel owners rushed to add floors to their existing structures to take advantage of it.

Following the hotel closures, a section of hoteliers demanded action against the officials of the Municipal Corporation, Town and Country Planning, Power, and Irrigation and Public Health (IPH) officials who allowed a large number of illegal hotels to come up and flourish in violation of rules.

Hotel owners complained that they had to cancel bookings of tourists visiting for Christmas holidays.

Last Updated: 21st December 2017 05:47 PM |
SHIMLA: The Himachal Pradesh High Court has asked state authorities to initiate action against 116 more hotels and guesthouses operating illegally in and around Dharamsala town and also to immediately disconnect their water and electricity connections.

During the resumed hearing, a bench of acting Chief Justice Sanjay Karol and Justice Ajay Mohan Goel was informed that the state pollution control board had carried out inspection of 309 hotels in Dharamsala and its suburbs McLeodganj and Naddi and found that 116 of these were violating rules.

The judges were hearing a public interest litigation on environment degradation in and around Dharamsala, the abode of Tibetan spiritual leader, the Dalai Lama, some 250 km from the state capital.

Earlier this month, the bench directed the authorities to disconnect water and electricity supply of 49 similar units. Later, 26 more units were added.

"We are happy to note that at least now the pollution control board has started performing its statutory duty," the judges observed in an order dated December 19 that was provided to the media on Thursday.

Listing the case for the next hearing on Friday and directed the state Tourism Director to be present in the court, the bench said: "Himachal Pradesh essentially is a tourist destination. We want tourism to grow.

"Endeavour is not to stop the same in any manner. Perhaps, people running such establishments are not even aware of the factum of existence of the laws of compulsorily for getting certificates of registration or obtaining consent to establish."

"Though, ignorance of law cannot be an excuse, but nonetheless, it is also the duty and obligation of the authorities to not only make people aware but also sensitise them about the same," the bench added.

Good move by the government, even though it will cause trouble for the tourists initially.

There really is a need to strictly implement the rule of law in hills in order to save whatever little is left of the environment in most hill stations.

I welcome this move by Government.
It's good to see the noose tightening around hotels and other setups which are damaging everything around them.
I have seen many hotels in hills throwing their garbage without paying any heed to environment and the ills of such a practice. They are charging so much from tourists and not giving anything in return to local area to reduce the damage caused by their deeds.
D

Should see how long is this going to be sustained.
It is true that Town planning and other government employees should also be charged. The rules are also put forward by these class to extract more money.
When things are genuine too; one needs to be bribed.

Holistic approach should be put in place to take care of Development and holding the Environment. People folk to these places for a change and commercialization unchecked of these localities spoiling the serene is not called for.
Yes it affects local employment, but it is a short span.

Where there is demand there will be supply. Almost every place which we considered quaint a few years back is now getting commercialised. With income levels rising this trend will keep on to match the demand.
You must log in or register to reply here.
Share:
Facebook Twitter Reddit Pinterest WhatsApp Email
Top