Hi, travel dynamics is changing fast with new roads, newer routes and some dramatic engineering marvels appearing on regular basis. A place where a combo of all three can be witnessed first hand is the stretch between Jammu city and Udhampur. Work is in progress on two stretches- around Nandani Tunnel and near Jajjar Kotli and the rest has already undergone a huge transformation. Besides its implication on time and distance, one aspect that has been affected the most has been the joy of eating fried Paneer Pakodas at Nandini Tunnel (Jammu end). Very soon, that niche will be a history. At the same time, Haveli has opened up at Suketar (04 Kms ahead of Nandini Tunnel) while the old (and yummy) Krishan Chand Dhabha continues to live on an edge. So, here we are with the contemporary....

1. Nadini Tunnel ghats and Paneer pakoda vending kiosks will be a history very soon. Actually, you think of it, it would not be a thing too bad! Firstly, despite a great taste and heritage, the hygiene (unless you are carrying the stuff along or eating while seated inside your car) has always been an issue there. Mercifully, there has never been a case of food poisoning there (and that explains the need to look other way) but surprisingly, shopkeepers never improved the ambience. Same old chairs and crude tables with plastic sheets or rustic paint (I would have preferred rustic raw wood arome instead). Unlike so many ghat roads and passes there on, this place had apparently frozen in time. Secondly, we the great citizens of a great country would never realise that tunnel is located inside a wildlife sanctuary! So, blow your horn, create jams next to the tunnel, throw garbage all over and worst of all, feed the monkeys (despite all the signboards telling us not to do that) who would eventually get crushed or become too lazy and dependent to hunt for own food (not to mention their rising cholesterol and lipid levels)!. So, it may, afterall, not be too bad a thing if four tunnels make us zip through the belt without causing more damage to the environment. BUT WHAT ABOUT PANEER PAKODAS? Well, mercifully, a few new dhabhas and tea stalls have opened up between Nadini and Suketar (you turn left for Ma Vaishno Devi Shrine at Suketar). They all serve paneer pakodas since some of them are actually 'wise' men from Nadini. Amongst such a mushrooming community, the best of all is SHARMA TEA STALL! Where is it? Well, it is the very first tea stall (co-located with a dhabha of the same name - Sharma Dabha) after the Tunnel. As on date, it is about 02 Kms from the existing tunnel and it would be approx 2.2 Kms from the point where upcoming Tunnel No 4 will open out towards Udhampur. In any case, it cannot be missed because it has a proper Truck Laybye next to it and there are always 5-10 trucks on either side of the road (truckers always know the best places). So, while dabha is just about OK, the tea is legendary - courtesy two elements; first is the spring that is located next to the shop and secondly, the wood stove. Pandit ji, as the old tea brewer is affectionately known, does not brew more than five cups in one go and all this gives you a great cup of tea. He also sells Paneer Pakodas (+raw cottage cheese or paneer - you got to be lucky to get that though). But the most favourite snack here is the Mathi! In fact, his son/ward/whosoever who runs the dabha next door, keeps frying mathis throughout the day.

(Incidentally, this tea shop-dhabha combo was hit a bit during recent rains when a chunk of hill came down crashing on the complex but no harm was done beyond two feet thick deposit of mud and dead vegetation inside and around the tea stall. The spring had got buried but water did not stop and addicts like us had the privilege of enjoying the tea brewed from the water that kept on flowing despite its source under mud and debris the next day. Things are back to normal now.

2. Haveli- Look at the timing of the whole thing! Haveli had just come into shape and partial operation when it was hit by road widening work. It is rumoured that the guy was offered a handsome compensation for budging a bit towards rear but he had refused. So, today, what we see is a truncated one. Its parking is now on to one flank and drive in has been screwed a bit. Nevertheless, the place is reasonably good. It is no match when compared with its cousins at Jallandhar or Karnal but given the standard of other eateries between Jammu and Udhampur or Katra, this place stands out. Food is good even though the chef tends to be liberal with chillies. Try local cuisine, Rajma Chawal (not as great as those at Peeda Norh ahead)- good but spicy. Loo needs some doing but food as also ambience inside the main dining hall is pretty good. When dining in a small group, average cost per head for a meal would be around Rs 250-300. Even for a single diner, similar figures will hold but variety will obviously be reduced.

3. Krishan Chand Well, the road widening and realignment has had its victims but one old and very famous place that has been able to survive the change, has been Krishan Chand's Non-Veg Dhabha at Manthal. Manthal is nothing but a cluster of few rundown eateries who have, like their friends at Nadini, not really cared to upgrade. The last dhabha on to the right side of the road (the first one on to the left when coming from Udhampur/Srinagar) is the one where you can enjoy some very yummy Chicken curry with rice (holiness of the name of the owner notwithstanding!). There are a few more shops around but this guy is the best. The cluster, BTW. is just about 11 Kms ahead of Suketar. Ideally, one must, on the way from Srinagar to Jammu, have chicken-rice here and drive a little bit to top it up with tea at Panditji's tea shop....well, this is just a suggestion.

4. Pickle Shops Manthal also offers some real good local pickles. And being from the source, they give it to you on discount. Worth a try, the variety is good, including some non-veg stuff too.

Thought of augmenting the above information with pictures... 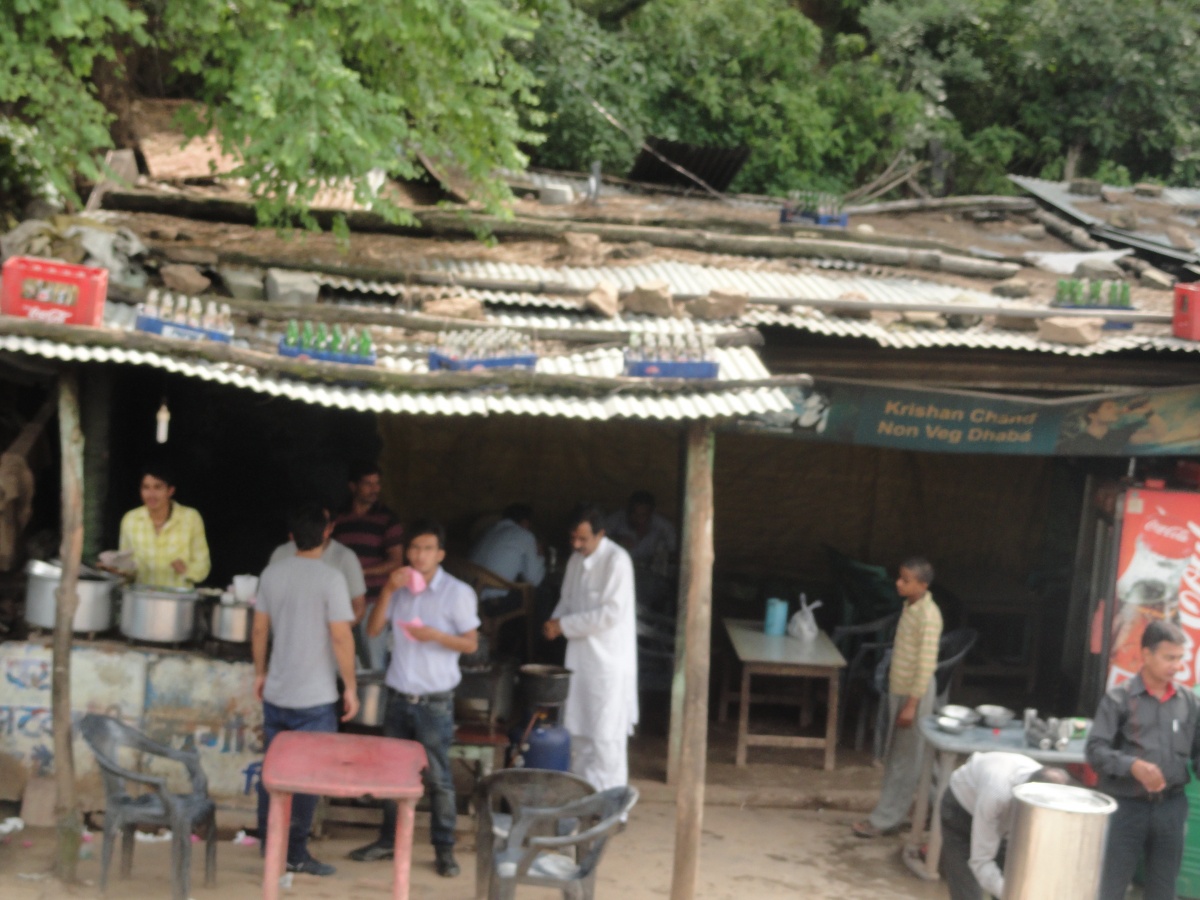 This is the one at Munthal 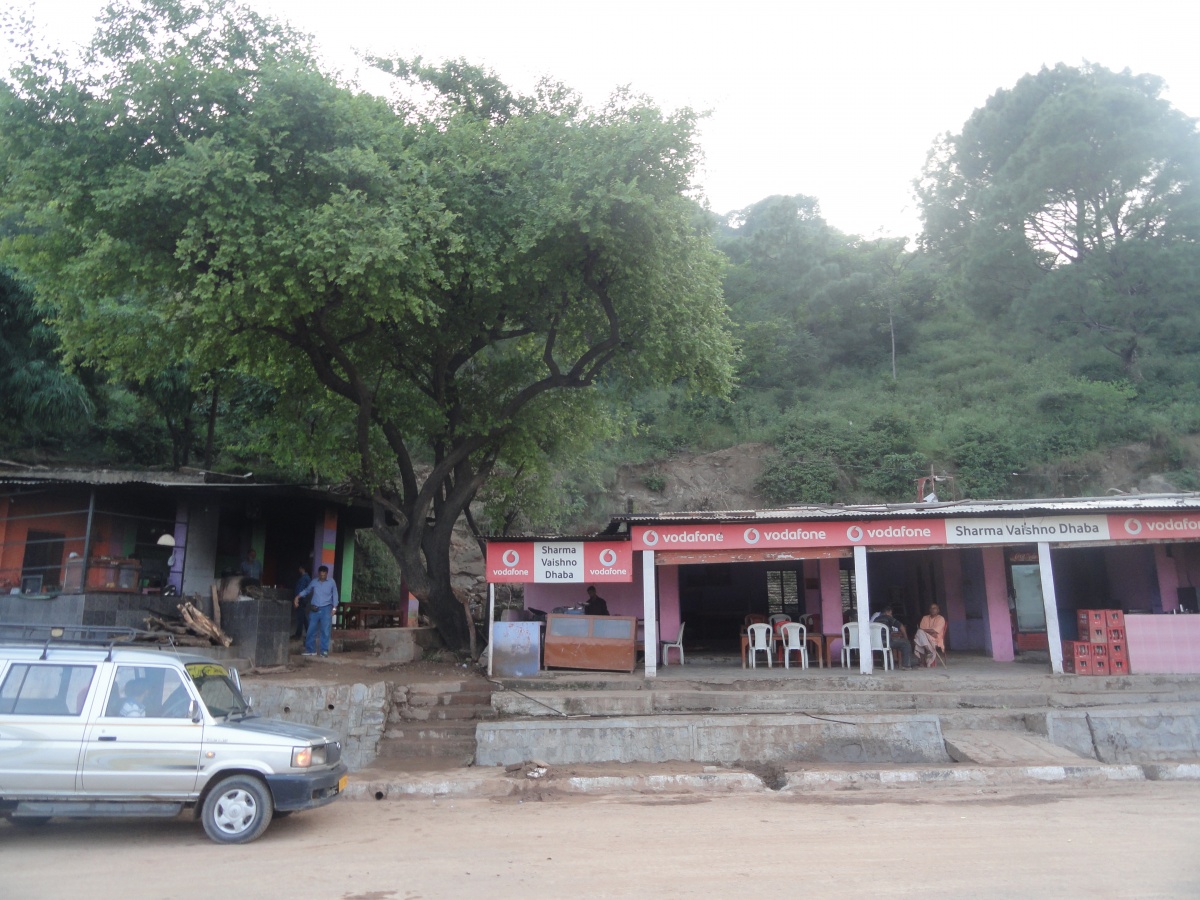 This is the combo of tea stall and dabha; both belonging to the same family 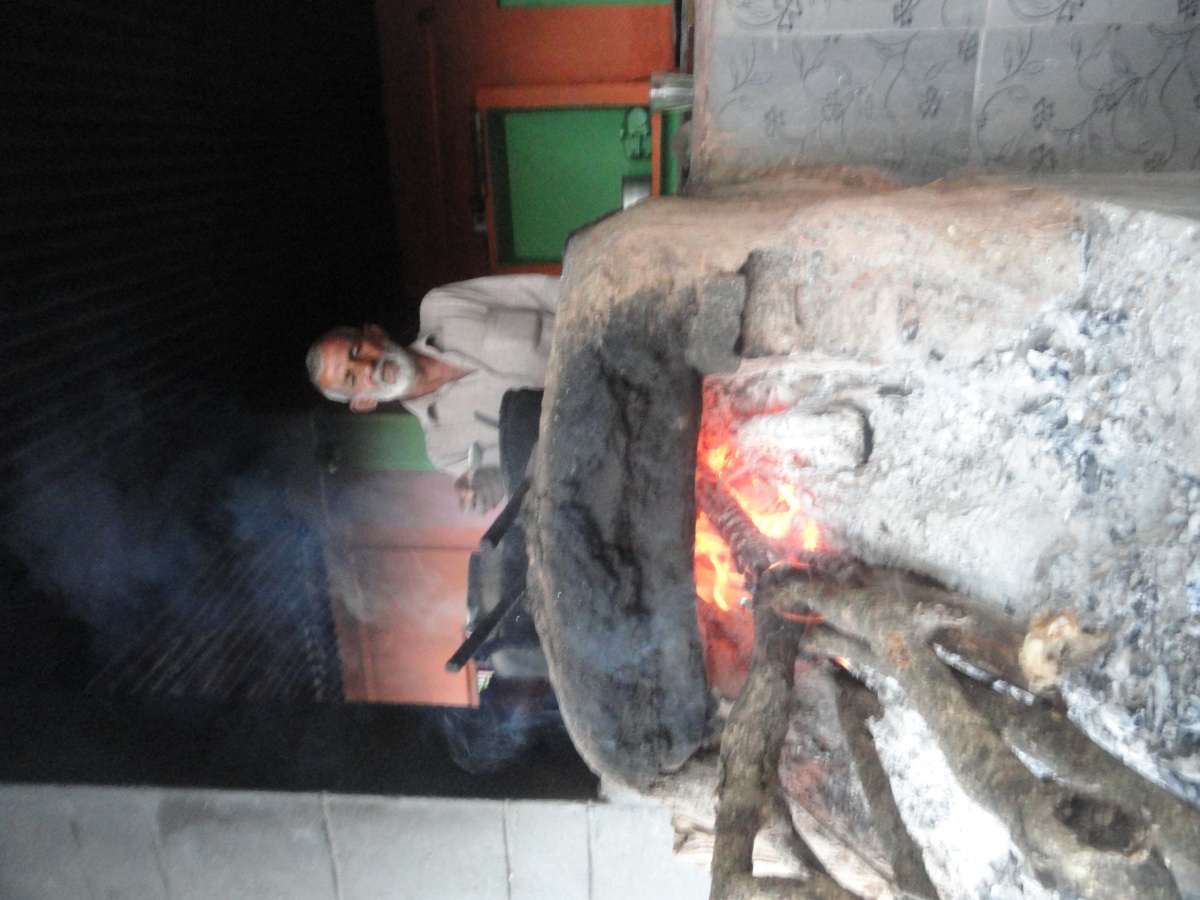 Wood stove and water from the spring and that is the key perhaps! 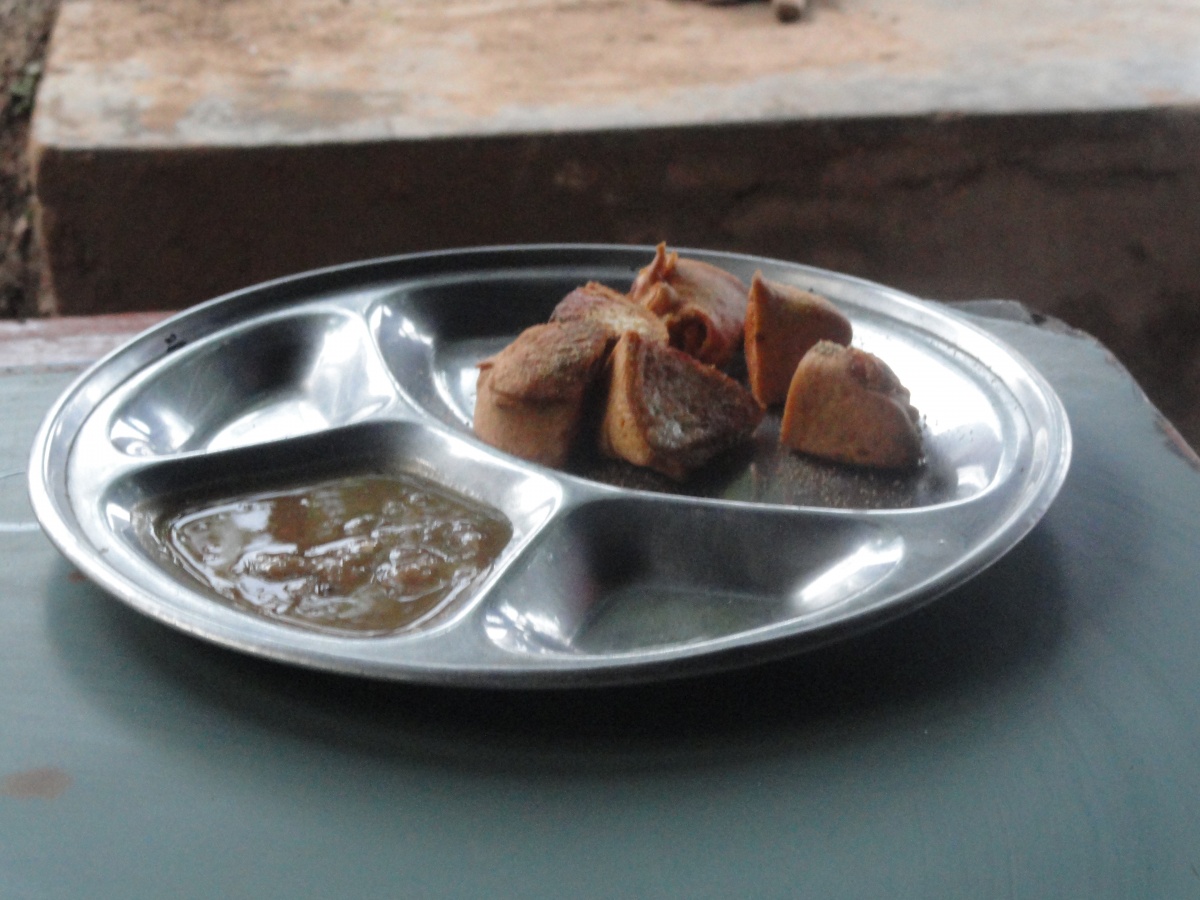