Kalpa, A Dream That Came True

citymonk said:
Hoping it gave desired result now. As pre conditions required to start a sundowner were perfect this time.
Click to expand...

Friday night, I was sitting in Starbucks at Cyber Hub Gurgaon, sipping coffee and reading Tolstoy’s Short Stories. Out of nowhere, a thought came in my mind that I shared on my social media account, “A small hut in the midst of the Himalayas, surrounded by miles and miles of electrified fence to keep others at bay, is all I need.”

By the time I came back home (past midnight), I was set on the idea to travel to the Himalayas.

I had been away from them for far too long and it was now time for me to escape to my hermitage.

I initially zeroed in on Shangarh in Sanjh Valley.

I was elated to find a direct bus from Delhi to Sanjh and that too a deluxe AC. However, it seem odd that HRTC would take the longer route via Shimla and Jalori Pass to Sanjh, rather than going via Aut. After scratching my head for a while, I finally booked the ticket at 12:46 pm on 6th April, just 6 and a half hours before its departure from Delhi.

Now, it was time to pack.

What an amazing photo!

Then Certainly it was some spurious stuff just to bluff pepole on Highway.
Years back I purchased 'Honeybee' Brandy in winter at Chail.
It too had very strange powdery taste and had to throw away the quarter. Even label on quarter bottle was pasted in reverse way.

Wow!! Awesome photos, Kalpa is my favourite place for sunset and sunrise, I have not seen a better sunset anywhere in Himalayas.
On a side note, I thought you have been to Kalpa on your trip to Spiti, surprised to know it was your first visit
Hotel Apple Pie, opposite to the HPTDC has one of the yummiest chicken curries in Kalpa

At night, the room was cold, around 10 degrees Celsius and yet, it felt colder. In fact, I did not feel cold from the outside, rather from inside. I had come to Kalpa with a lot of anger and frustration, now it seemed to have been replaced by melancholy. And the flame within me, extinguished.

There was a room heater but I did not wish to turn it on. Even though I wore my fleece and cap under the rajai, I could not get rid of the feeling of coldness within me.

I sat in the bed for not sure how long, until I woke up around six in the morning. I was warmer than earlier, but still felt empty.

I got off the bed, readied my camera, and went outside.

My cheap Chinese temperature clock showed 3 Degrees Celsius outside, it was shiveringly beautiful. 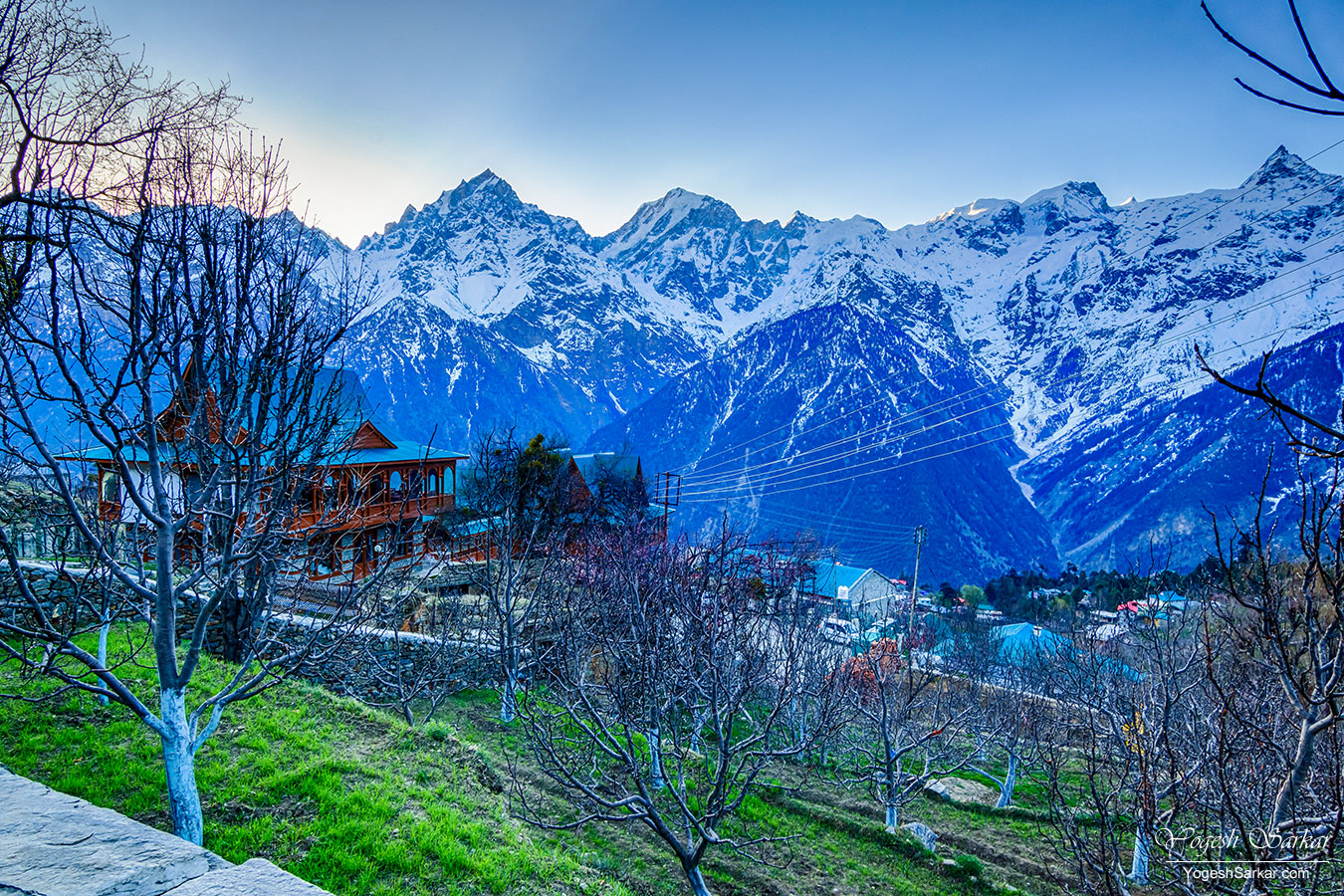 I started shooting a time-lapse, once again without remote and without gloves; my hands froze, as I kept pressing the shutter release button until the sun rose and illuminated Kalpa with its divine light.


Once the sunrise had occurred, I took a couple of more photographs, before retiring to my room to get ready for the journey ahead. 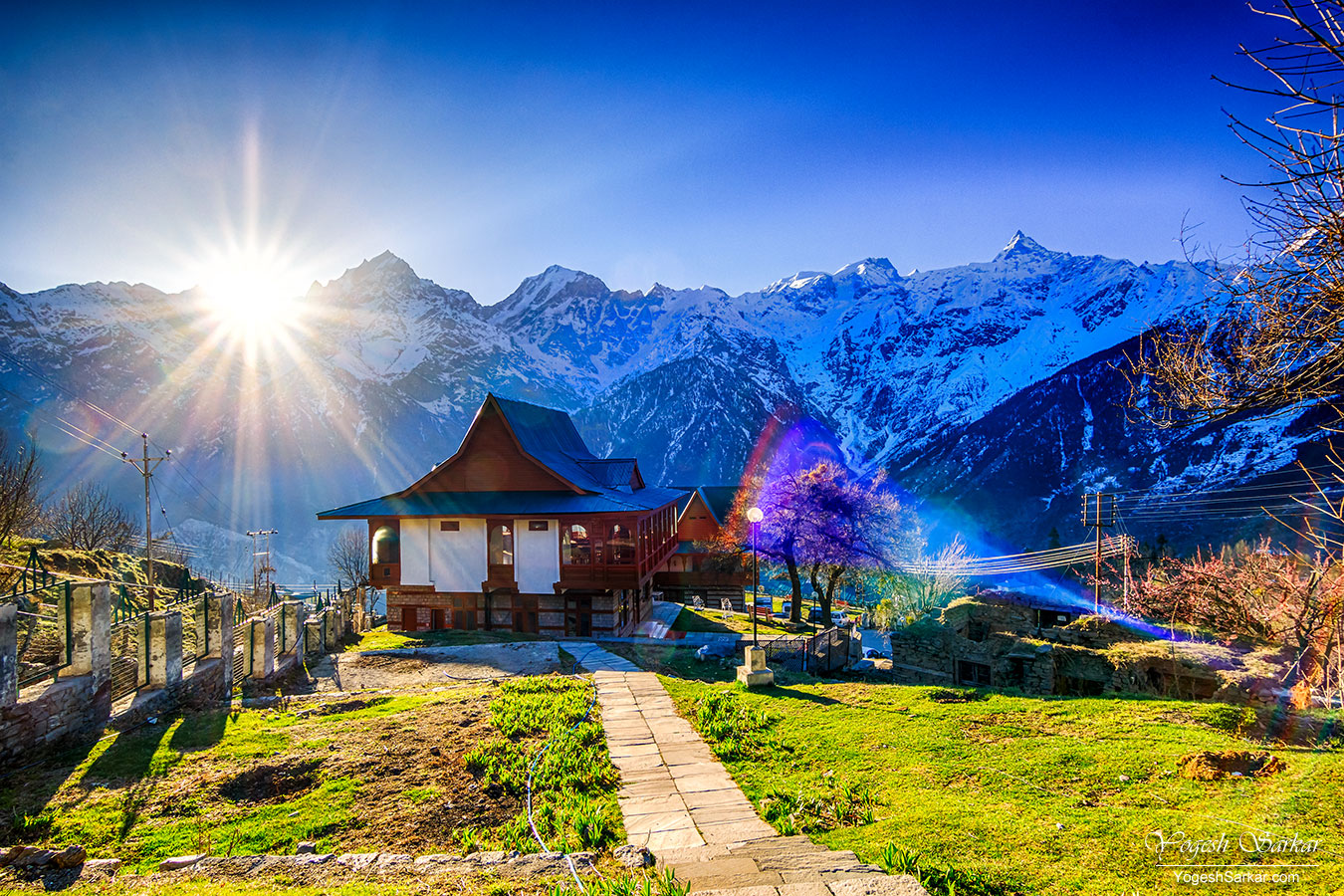 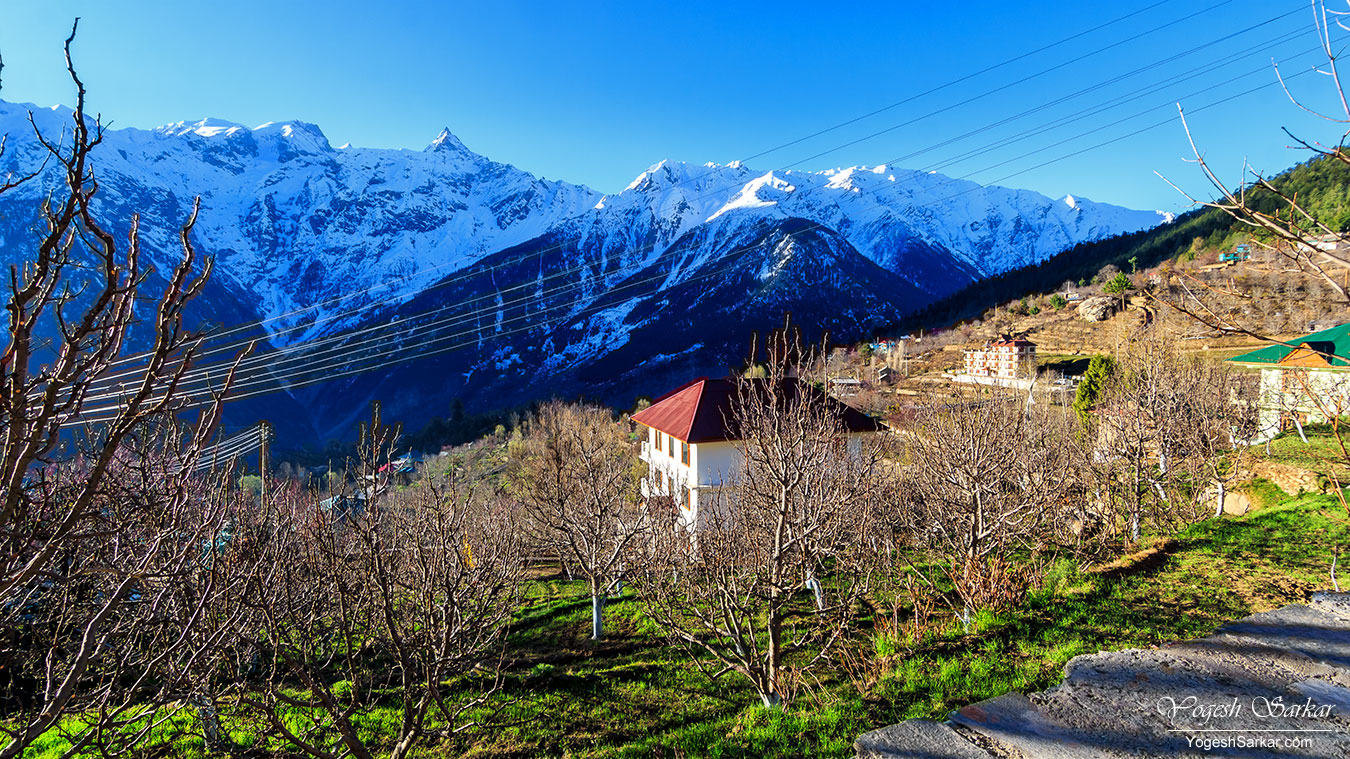 I ordered paneer paratha with curd and tea, for some reason my heart told me to “eat heavy, you might not get the chance again”.

By 9 am, I had checked out of my hotel and was walking down to the Kalpa bus stand.

Even though I love to travel, I am just as happy travelling back to my home. Yet today, I felt sad for leaving and for a moment, I did not wish to travel back to the city I call my home. I wished to stay back and venture deeper into the Himalayas. I did not realize, how long it had been, since I sought refuge here. I missed that.

It was just as well my thoughts were wandering all over the place, since I had to stand at the bus stand with luggage on my back, for nearly half an hour, until the bus for Reckong Peo arrived and I boarded it. 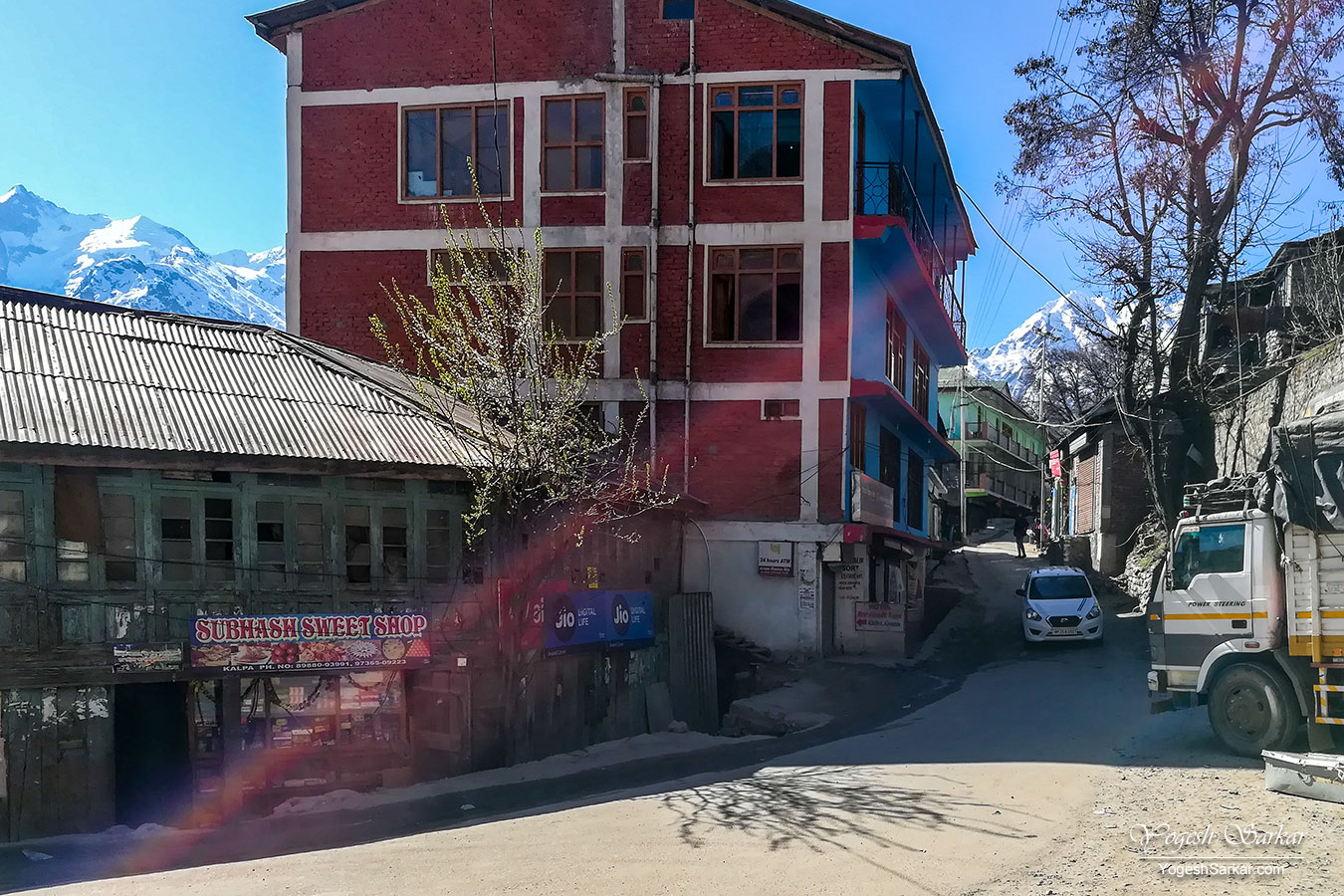 For Rs. 15, it was going to take me from Kalpa to Reckong Peo and from Peo; I hoped to find another bus to Delhi or Shimla. 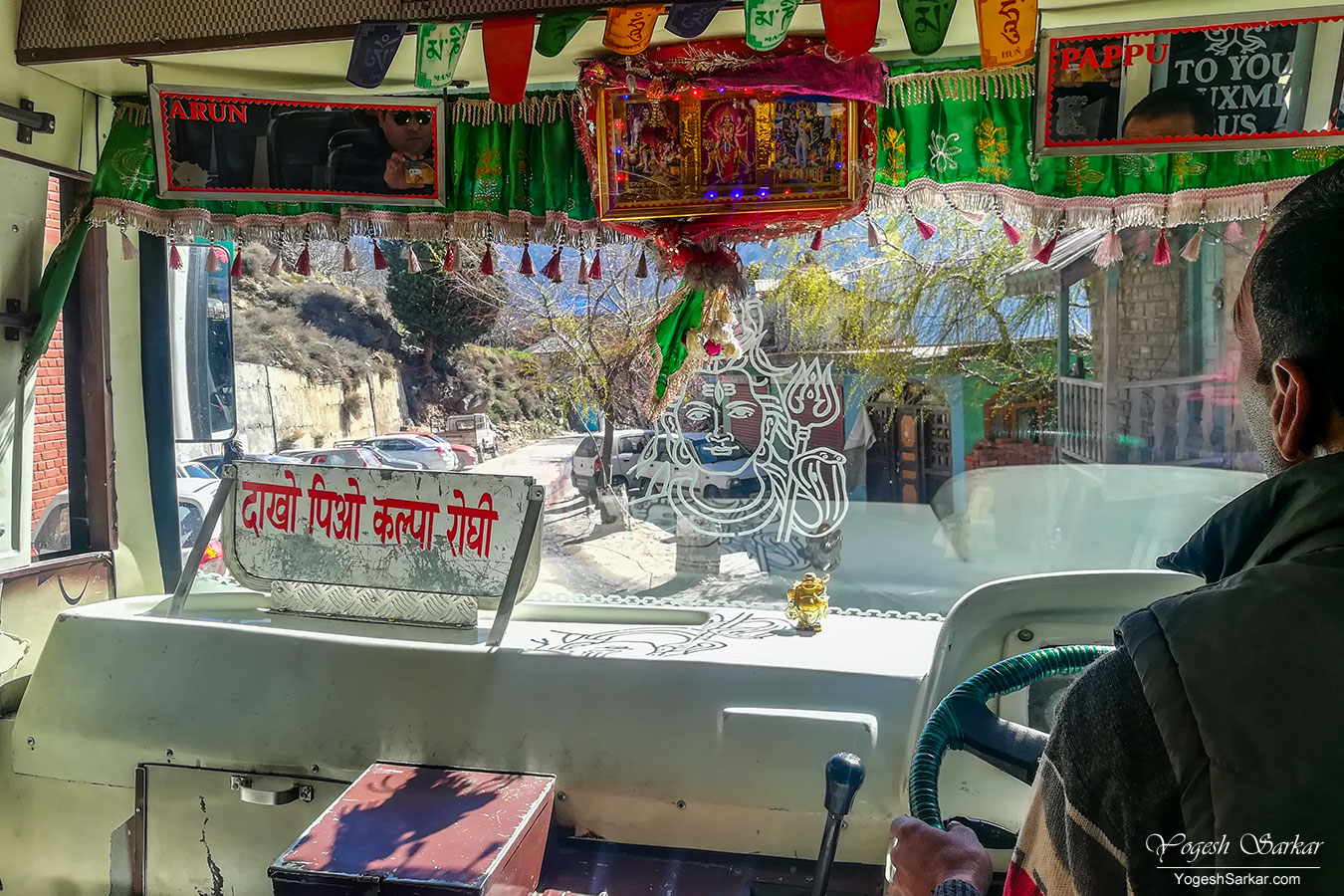 Once at the Reckong Peo bus stand, the wait began to find a bus to Shimla, since I was no longer in a mood to take a local bus to Delhi. 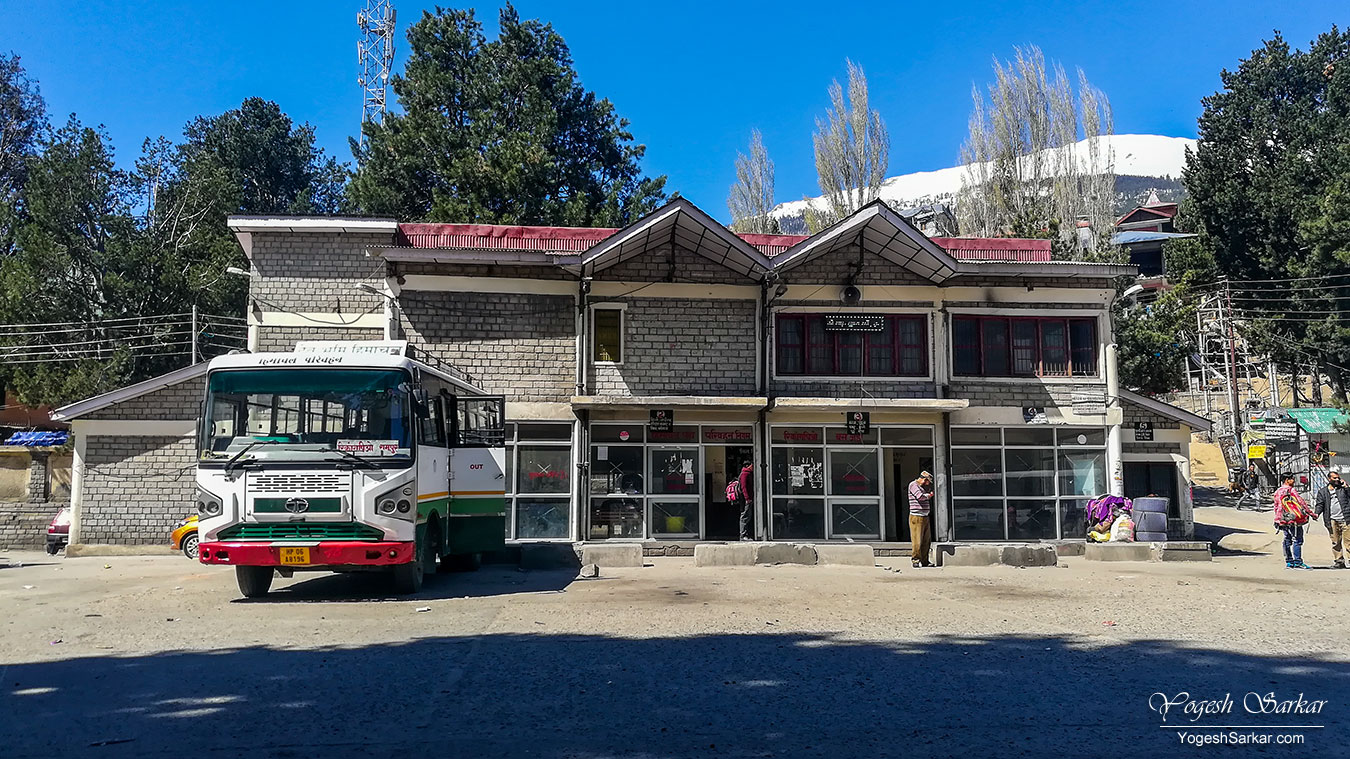 An hour later a Shimla bound bus arrived and then I had to wait another half an hour, before it began its journey towards Shimla. 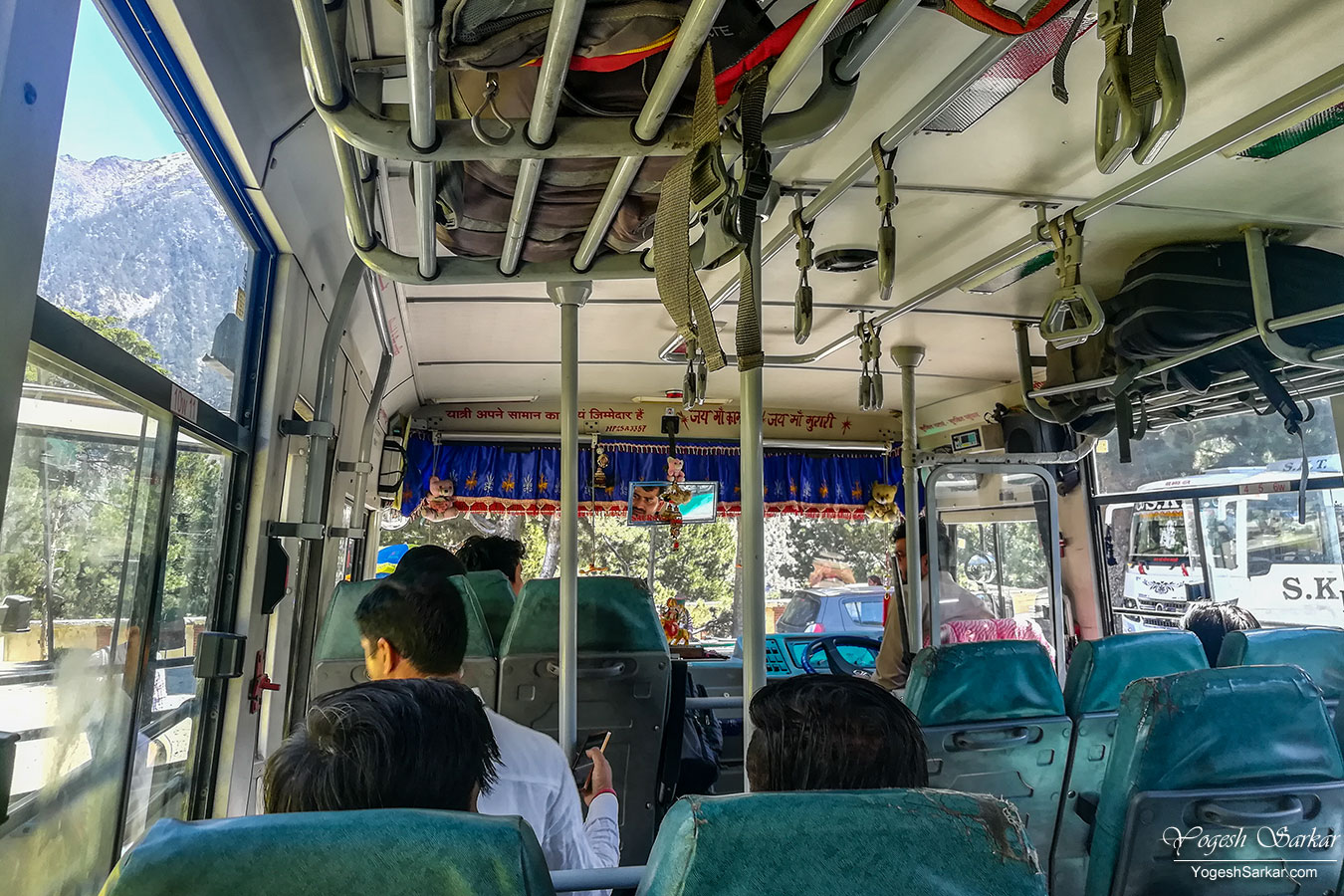 I had to pay a little over Rs. 400 for the journey to Shimla. However, the bus was full and the road, full of dust.

I tried drowning myself in music and succeeded somewhat, until we stopped before a landslide zone, where the work was going on. The bus waited for nearly an hour at this juncture. I was trapped in my seat for the entire duration and it seemed like, I would reach Shimla late enough to miss the last Volvo to Delhi.

Finally, the bus got a go-ahead and it tried to hurry past the landslide zone, for the fear of falling rocks. As luck would have it, a car came from the other side and our bus had to stop and wait for it to move out of the way. Bus conductor clearly made his nervousness and anger known to all, by shouting out expletives at the car driver.

Thankfully, no rock fell and we made it to Rampur.

Once at the Rampur Bus Depot, bus took a halt for half an hour. I bought a 500 ml bottle of cold drink; I did not wish to eat anything.

Soon after the bus began its journey, a rather fast paced one to Shimla.

Around Kingal, bus stopped for food break and yet, I stayed in the bus and finished off my cold drink.

The sunset occurred when we neared Narkanda. I always love the sunsets here, they seem stunning, even when compared to sunsets elsewhere in the Himalayas.

The driver was in a hurry to reach Shimla at time and he managed to do that, 5 minutes after the scheduled arrival time, even though that landslide zone had eaten up an hour of our time!

I got down at the bus station and asked a young lad, where I could find tickets for the Volvo bus to Delhi. Instead of telling me, he took me directly to ticket counter and even inside. He requested the ticket clerk to give me a ticket and left, before I could barely utter, thank you!

I have no clue, why people at times can be kind and helpful like this, but it fills the heart with warmth, even if for a short while.

Ticket clerk issued me a ticket for nine thirty Volvo to Delhi for Rs. 965 and rushed down to the Volvo to get my luggage loaded. 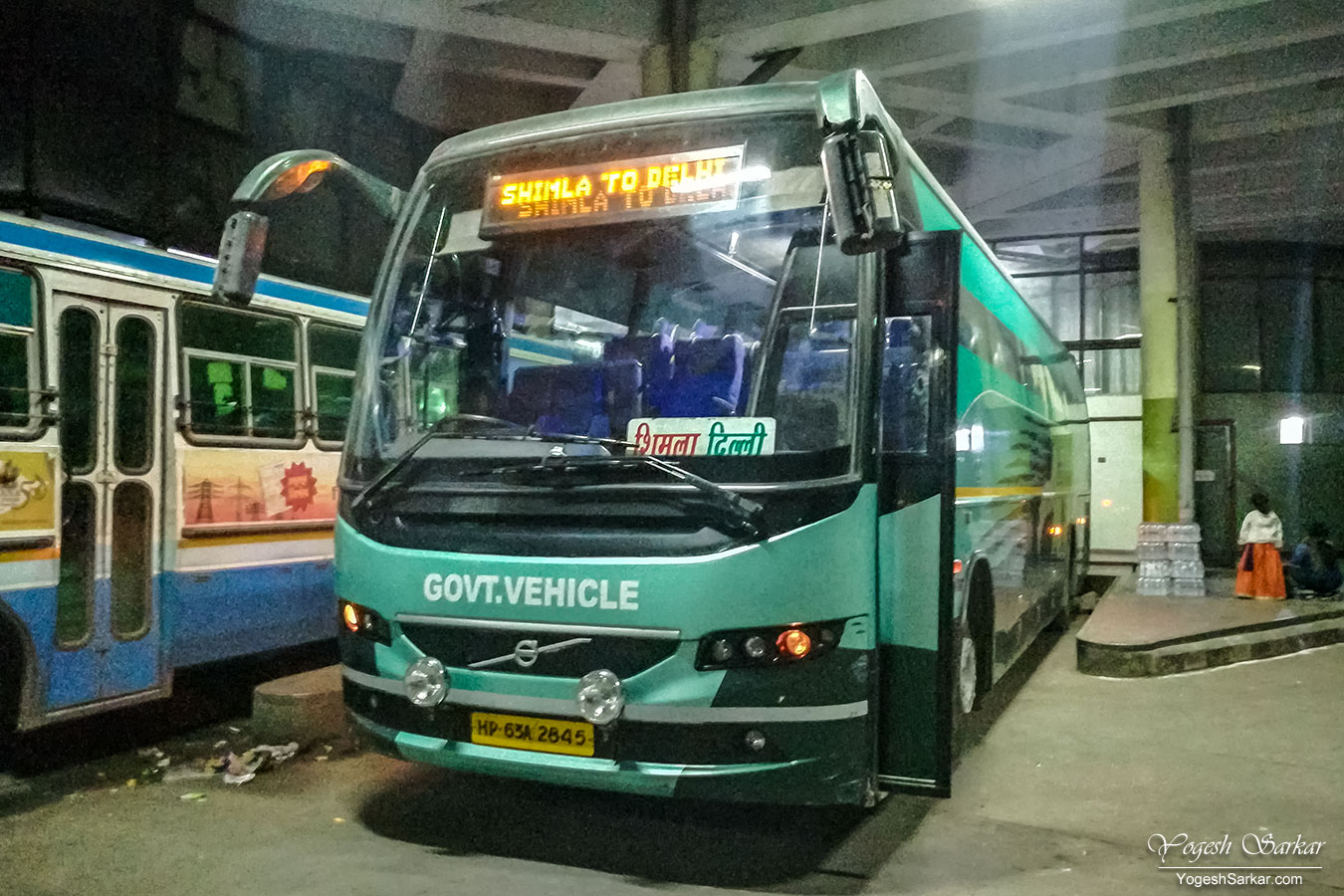 I barely had enough time to freshen up and get a packet of chips, before the bus began its journey towards Delhi.

I ate the chips and drank the last bit of my cold drink.

There was a storm brewing inside and the music helped drown out to external noises. Thankfully, though, the bus was comfortable and there was no one sitting beside me.

Around Kurukshetra, I bought a small bar cake and ate a bit of it. I had barely slept for half an hour and now, it seemed I would not be getting any sleep, until I reached my home.

Around 6 am, the bus reach Delhi and I took an Uber back to my home.

wow lovely narration
at some points I felt you poured out your heart.
I enjoyed it...
excellent