I had been planning to travel to Kashmir during autumn for quite some time now. I wanted to photograph the beautiful Kashmir Valley in the varied hues of autumn. However, for one reason or the other, the trip never materialized.

So when I was approached by the J&K Tourism Department for a familiarization trip to Kashmir, I jumped on the opportunity, even though things were finalized at the eleventh hour and I received my flight tickets a couple of days before the scheduled departure.

The plan was simple, I was to fly to Srinagar on the 24th and fly back to Delhi on 28th, covering Srinagar, Betab Valley, Aru, Chandanwari, Pahalgam, Strawberry Valley, Leopards Valley, and Gulmarg.

Disclaimer: Even though the entire trip was sponsored by the J&K Tourism Department including flight, stay, food and sightseeing, this travelogue will represent my unbiased opinion and experience of my autumn trip to Kashmir.

I managed to reach the terminal 2 of IGI airport by 12:20 pm for my 1:45 pm flight. I felt I was a little late since clearing security can take a lot of time, especially with all my camera equipment. However, I cleared security quite fast and managed to reach the departure gate well before time.

However, the Go Air Flight to Srinagar was late, by over half an hour and the flight took off from Delhi at around 2:20 pm. However, we managed to reach the Srinagar airport only 15 minutes late, covering up some of the lost time during the non-stop flight.

At the Srinagar Airport, I was greeted by the JK Tourism Officials and there were over a couple of dozen other delegates for the Kashmir FAM Autumn Tour. After a bit of delay, we were assigned liaison officers, who were supposed to remain with us till the end of the trip.

My liaison officer was Rahul Pandita and he quickly escorted me and other members of his group to the tempo-traveler waiting in the parking lot. From there, we began our journey to RK Sarovar Portico, where our rooms were booked.

Apart from me, there were 8 other delegates in my group and apart from Vandana and Karan; everyone had already traveled to Kashmir at least once in their life. The group was quite diverse with Sumit, Karan, and Vandana being tour operators while Satpreet and I being bloggers and Naresh, Vitasta, Farhan and Ashutosh being Musically influencers.

We were informed by Rahul that there was a networking event planned at the Golf Course and we barely had enough time to check-in and head for it. However, Vandana was feeling hungry and insisted on having lunch at the hotel first.

Post lunch, we headed for the Golf Course, driving along the Dal Lake. 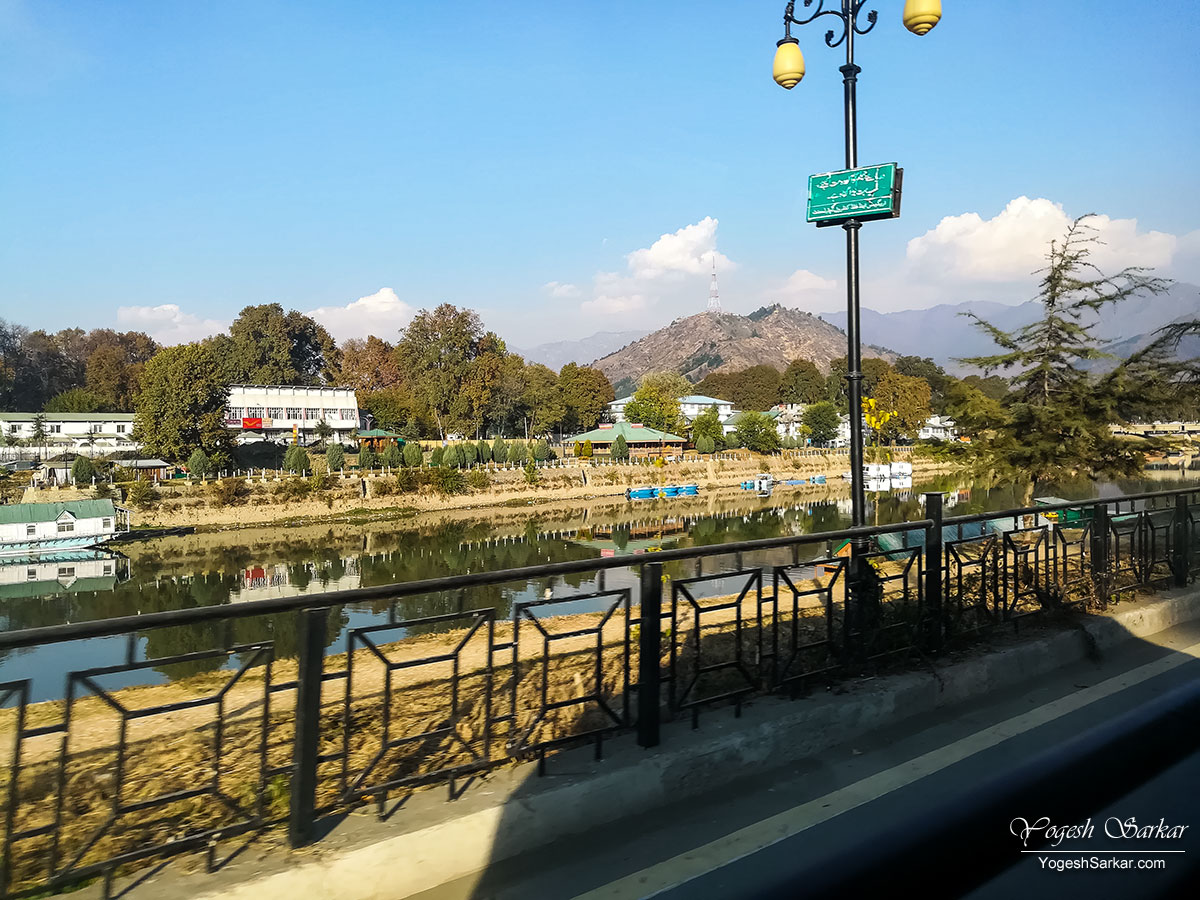 By the time we reached the venue, the networking event was over. However, I met Jagjit there and we chatted for a while, before parting ways.

Even though it was dark, I knew I couldn’t leave without taking at least a few photos at the beautiful Srinagar Golf Course. 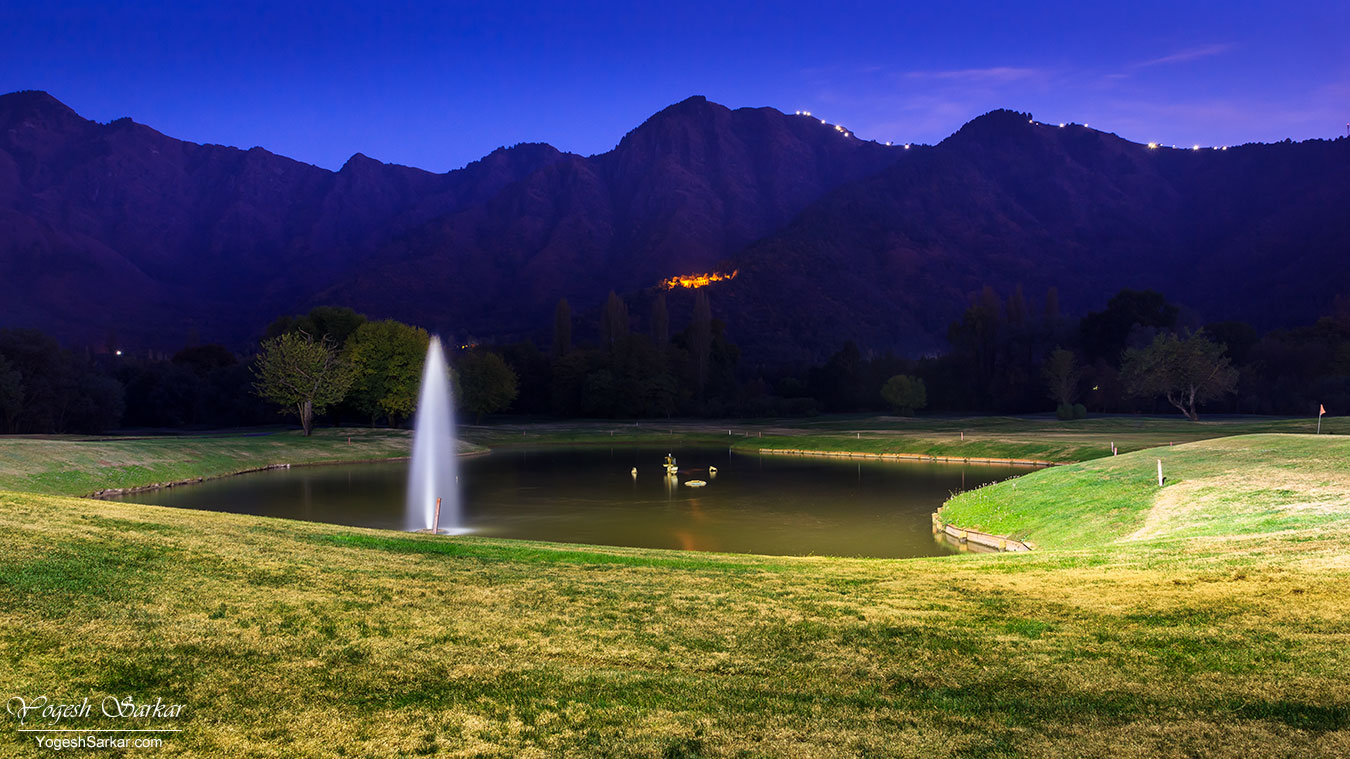 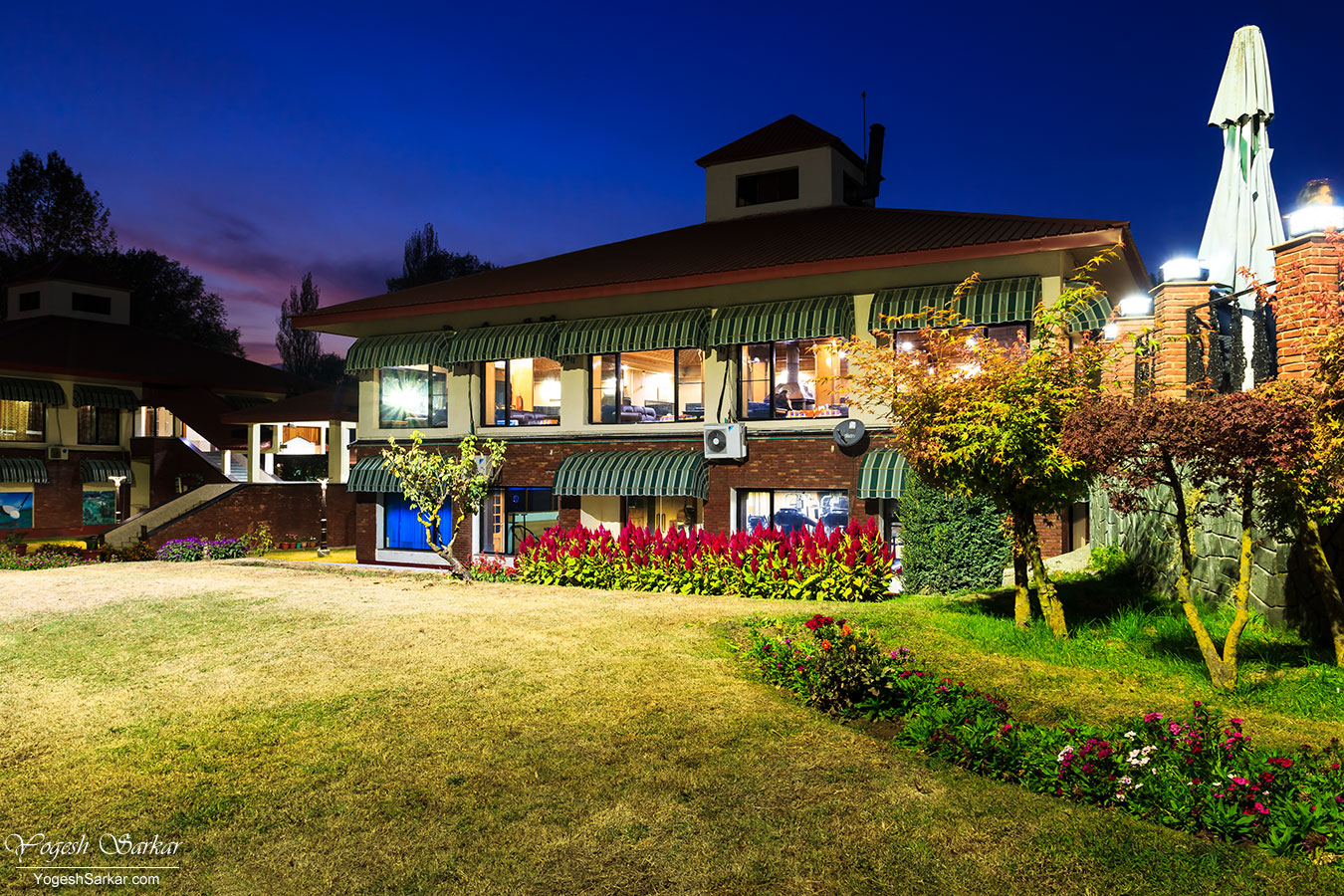 Sadly though, we were on a schedule and had to head back to the hotel. It was only after repeated requests from the entire group that Rahul relented and allowed us to spend some time along the Dal Lake.

While everyone walked a short distance along the lake, I decided to get down from one of the gates and take a few long exposures.

Barely 15 mins had passed; Rahul came back and asked me if I was done. I replied in negative and he agreed to give me additional time, while the group had kahwa. Finally, I got a few photographed that satisfied my hunger for photography. Though if I was alone or free from restrictions, I would have likely spent a few hours along the Dal.

Full Moon at the Shikaras in Dal Lake Our Tempo Traveller and Boulevard Road When we reached our hotel, I told Rahul that I would like to photograph the sunrise in the morning. And for that, I would gladly hire my own taxi or if need be, Jagjit would come and pick me up from the hotel. And I would be back at the hotel, well before our scheduled departure for the inauguration.

However, I was told, for my safety, I wasn’t allowed to venture outside the hotel. And the hotel wouldn’t allow me to leave, without permission from JK Tourism.

This was utter nonsense. After all, JK Tourism wanted to showcase to the world the beauty of Kashmir and how safe it was to travel here. And we couldn’t do that being locked inside a hotel, especially one where there was no view of the Dal or even the city!

But no amount of convincing was enough to get the tourism officials to budge from their position.

After dinner at the beautiful restaurant of Sarovar Portico, everyone retired to their rooms, while I shot a few photographs of the hotel. After this, I headed back to my room on the third floor of the second building, where the lift didn’t work. However, I was tired and the bed looked inviting enough to retire for the day. Tomorrow was going to be a new day, and I was looking forward to exploring Srinagar.

And its funny (and sad) that they arranged for this event to showcase that Kashmir was safe n all and yet didn't allow you to go out. Strange..

And its funny (and sad) that they arranged for this event to showcase that Kashmir was safe n all and yet didn't allow you to go out. Strange..

Yes. I had to continuously fight over this with them. Sadly though, apart from one or two tourism officials, no one else seemed to care at all about the impression they were making.

Yogesh Sarkar said:
Yes. I had to continuously fight over this with them. Sadly though, apart from one or two tourism officials, no one else seemed to care at all about the impression they were making.
Click to expand...

Anyways, you continue with the story and keep posting such beautiful images

Anyways, you continue with the story and keep posting such beautiful images

Thanks, I'll be posting the next part tomorrow.

Staff member
Awesome photography. The officials, it appears were just trying to play it safe, since they would have been responsible for any mishaps that might have happened under their watch.

Salil said:
Awesome photography. The officials, it appears were just trying to play it safe, since they would have been responsible for any mishaps that might have happened under their watch.
Click to expand...

I agree they were playing safe and adhering to "protocol", but as you will see later in the travelogue, it didn't really instill any confidence in the minds of those apprehensive about traveling to Kashmir and at the same time, severely restricted and frustrated those like me, who wished to see the real Kashmir.
You must log in or register to reply here.
Share:
Facebook Twitter Reddit Pinterest WhatsApp Email
Top