Kolhapur, Ratnagiri, Ganapatipule and beyond – A monsoon solo.

The way you have mapped the whole journey into words and pictures is simply beautiful.
Lucky to get snaps of the temple!

The kindness of strangers
After I collected my camera bag and sandals, asked the ladies at the counter what else is there to see around and was recommended the Juna Rajwada (old royal residence), and that it was around the corner. This seemed promising and so I walked ahead – the ladies had been most helpful unlike the tourism information centre booth, close to the temple premises. 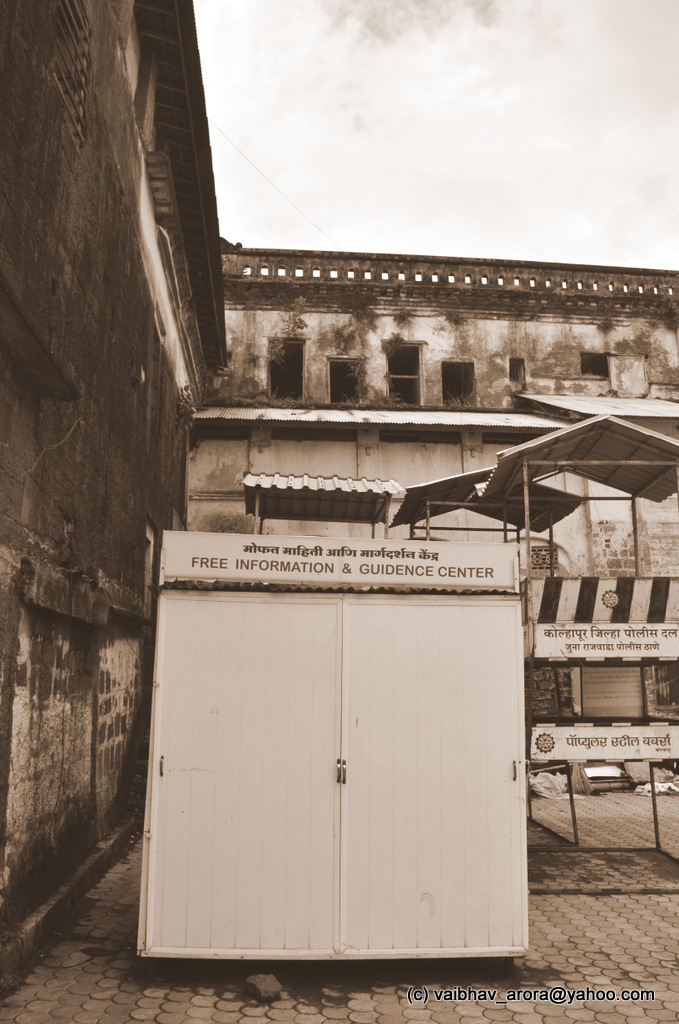 Four men, dressed in varied headgear and carrying ‘thali’ plates laden with a coconut, lotus and other offerings for the deity were rushing towards the entrance of the temple. I asked a few flower sellers about the commotion and it turned out that by tradition, the maharajah of Kolhapur has to be present at any major occasion associated with the temple - today was one such, the day of re-opening. These men were his attendants. 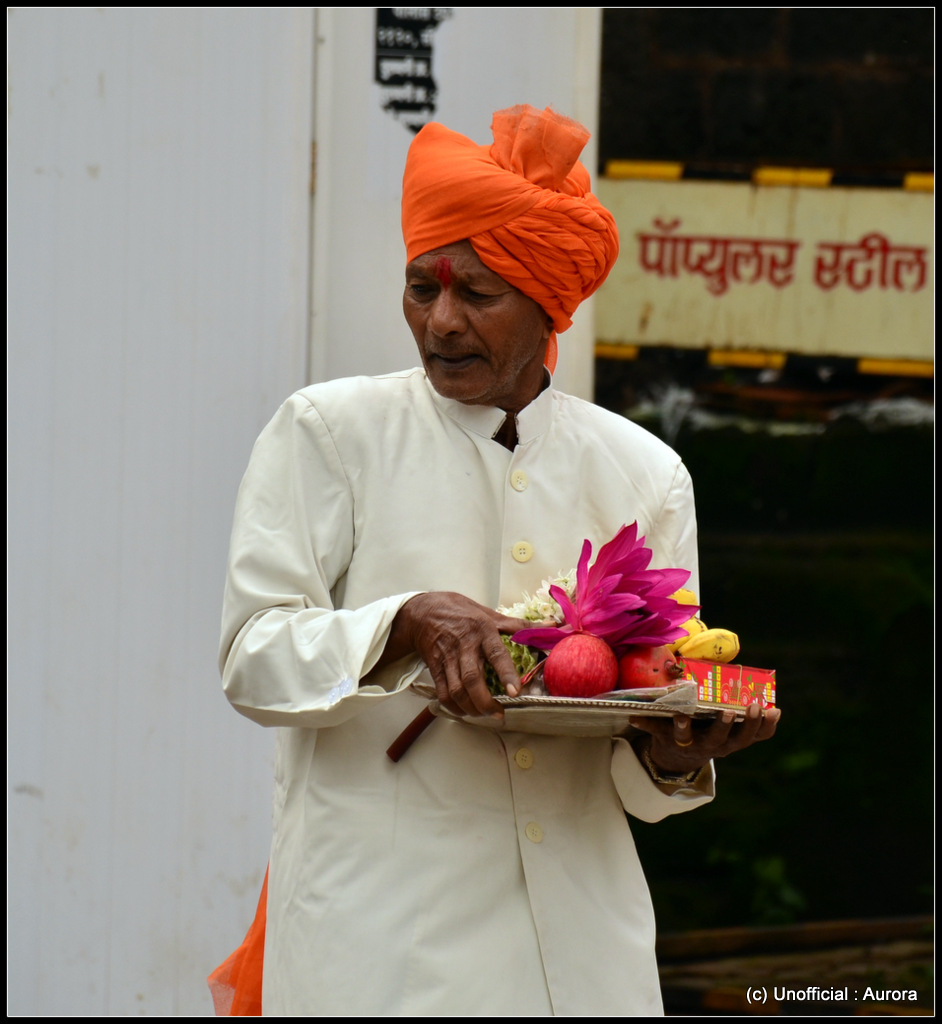 Not only today was the day, in about ten minutes, it would be the hour too.
This appeared well worth waiting for especially since there were other activities worth photographing – a man had installed a flag atop the temple and was descending from the spire (shikhara). This shikhara is designed in a way that a ladder is unnecessary to climb it or get down but that aspect is apparent only when someone actually does climb (as seen below). 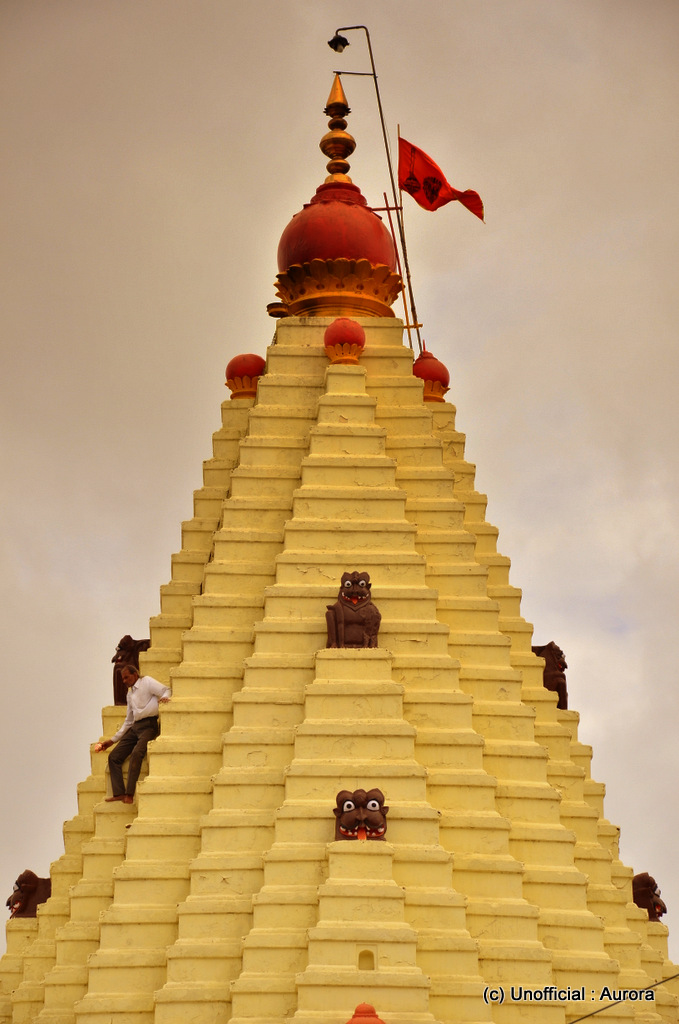 I asked this man dressed in a resplendent red angrakha, with antique metal thread work decorating the chest and arm pieces, cummerbund around his waist, traditional Marathi headgear and white churidar pyjamas if his attire was indeed old as I suspected. 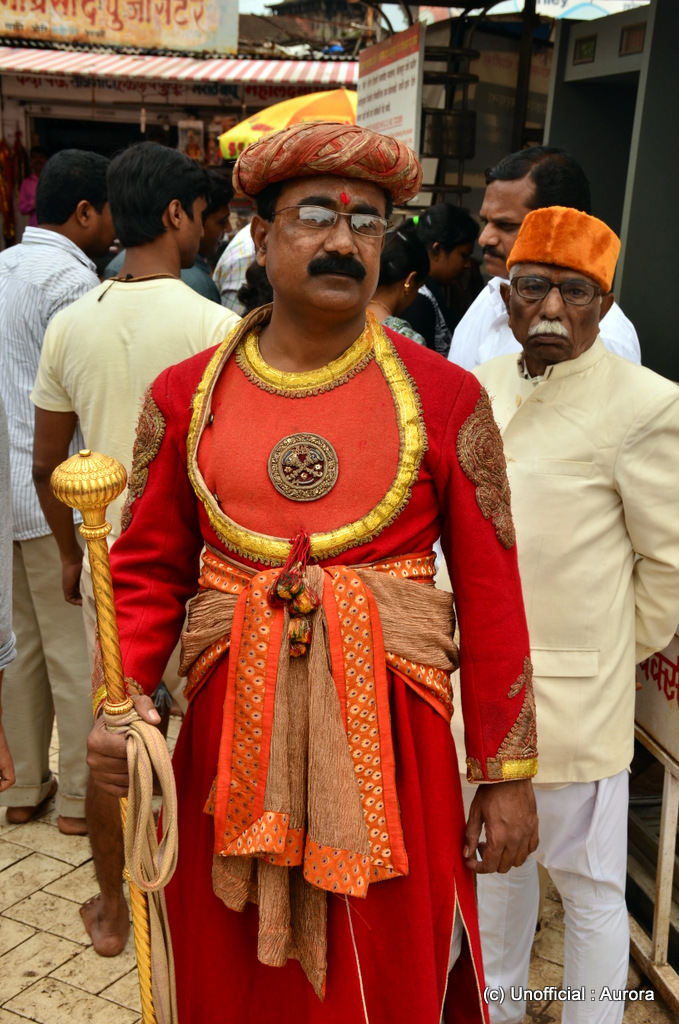 He responded in the affirmative, adding, this gear belongs to the state of Kolhapur, and is a decades old piece. I take it out of the state’s collection as the ‘chobdar’ and will recite the customary greeting once the king arrives and then return the gear. Chobdar is a title and position held by the macebearers of a king. The custom was established sometime around the reign of Prithviraaj Chauhan (12th century). This man’s dress had the words ‘’Jai Bhawani’’ embroidered using the dabka, badla and salma methods. Bhawani is the maratha’s tutelary deity and the name of Shivaji’s sword. Kolhapur was a 19 gun salute state, and thus quite well off. I suppose the king likes to maintain his traditions and the local population respects him in good measure too.

When, the current king, Shahuji’s Mercedes pulled up, the commotion was so great (there were literally a hundred schoolchildren, locals and visitors that got closer to get a better look), that I couldn’t get a clear shot. I got a small video instead.


The area around Mahalakshmi temple is known as ‘Juna Rajwada’ – or the old palace area. It’s an atmospheric place to walk around in and I wandered aimlessly, clicking at anything I felt like. First, I followed the schoolchildren to their ‘point of origin’ – in this case it was a school in the rajwada area, few meters from the temple. It had an atmospheric building with tall trees and a little, beautifully shaped temple. 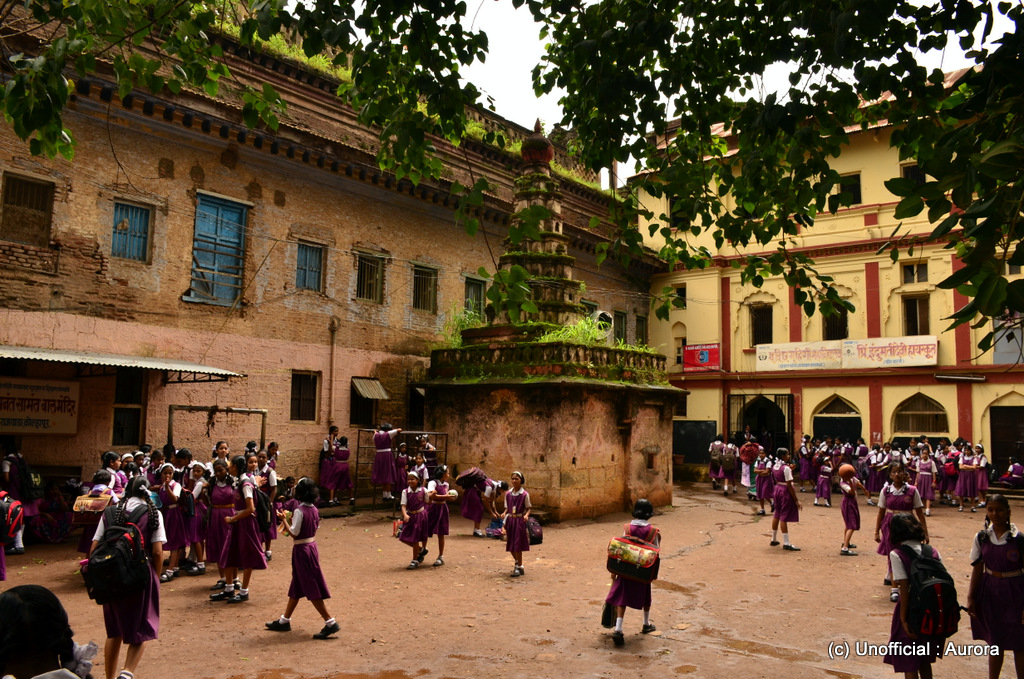 What ‘’made’’ the frame was really the color of the children’s dress – purple. I asked once if I could click a few photos and after a yes, snapped away. 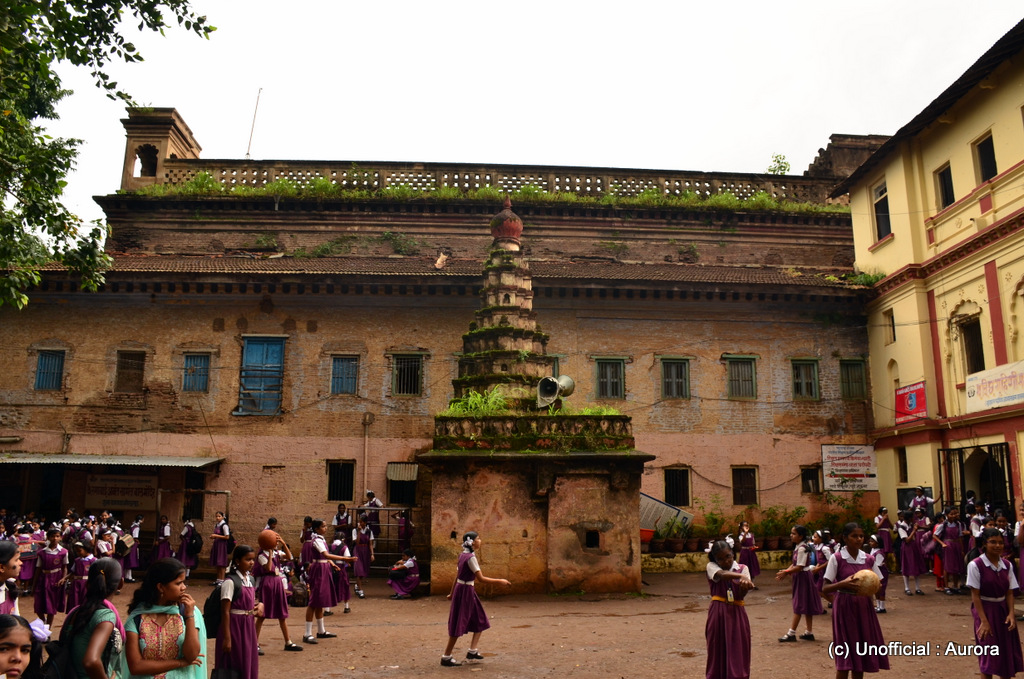 Opposite the school, was a shop with a sign most curios – ‘benne dosai’. If my food geography serves me right, that dish is endemic to Davanagere, Karnataka. 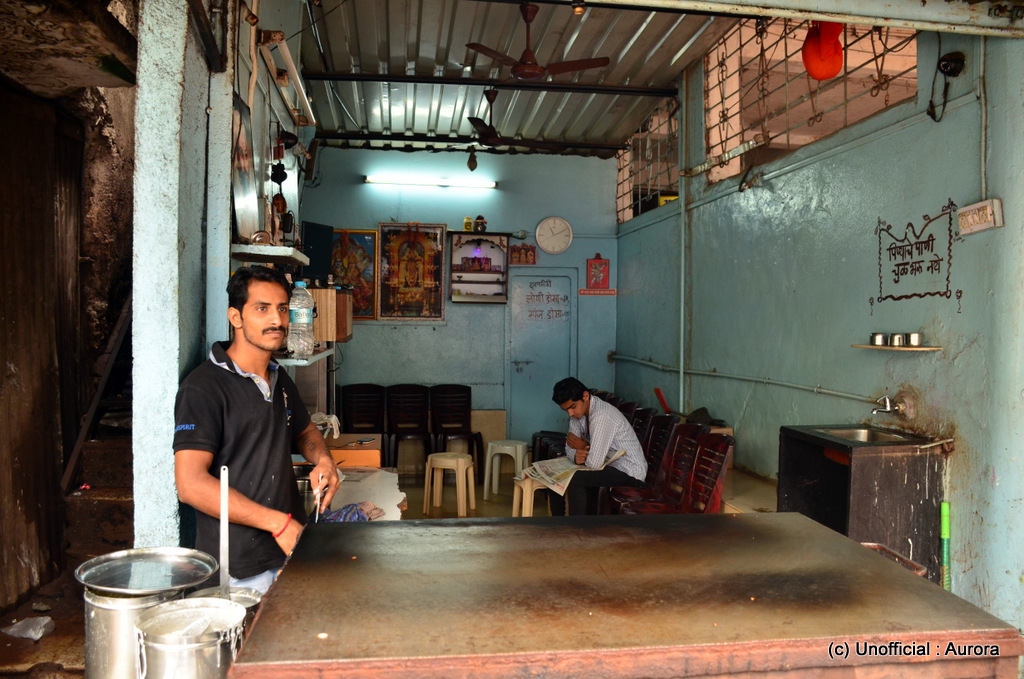 Turned out that this owner refused to entertain any such hypothesis that a dish as tasty as this could originate anywhere outside Maharashtra. I couldn’t refute and thanks to his charming smile, agreed to order one. 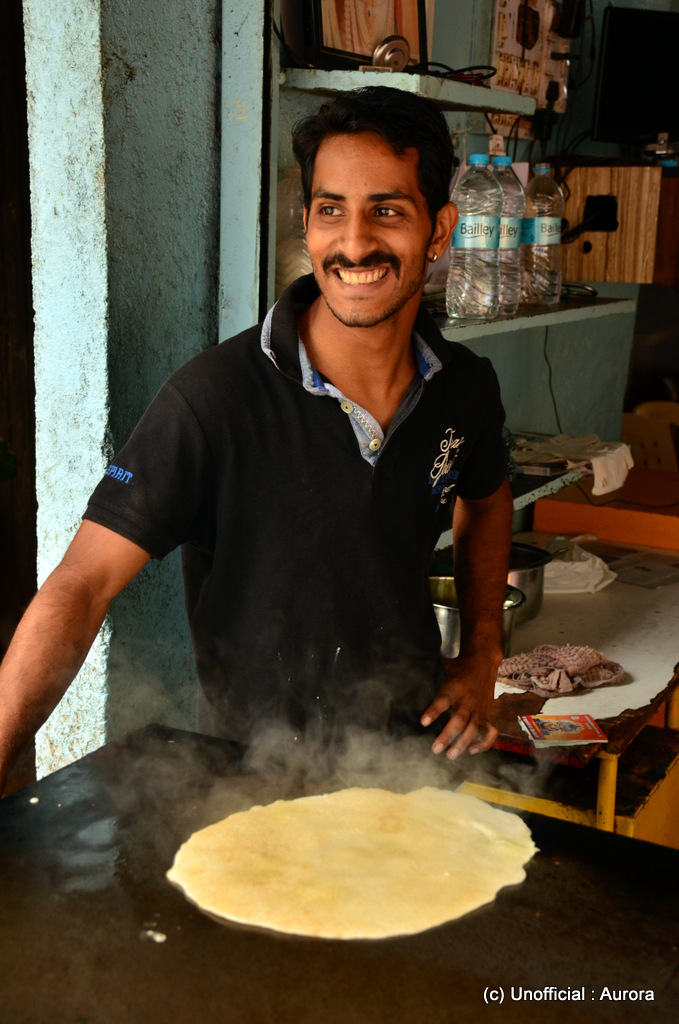 While he was applying generous dollops of butter to the dosai, it started pouring outside. 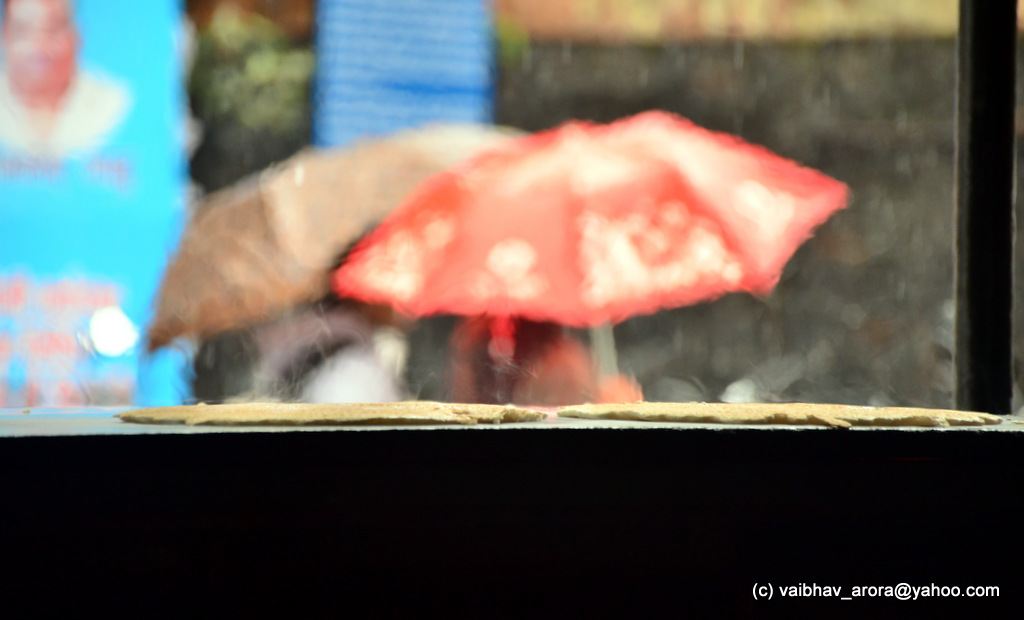 The dosai was fluffy, light and melt in my mouth. It was matched by the genuine curiosity of the shopkeeper’s friends about my camera, profession (journalist?) and choice of holiday destination (Kolhapur? Why don’t you go to Goa?) The celebrity treatment continued even when it was time to pay up – he didn’t charge anything and downright insisted that I should return to his shop in the evening!

All in all, I was enjoying my day in Kolhapur – with its shy, helpful people. Law abiding too. Well, mostly. (The sign reads, in marathi 'Please don't park in front of the gate'). 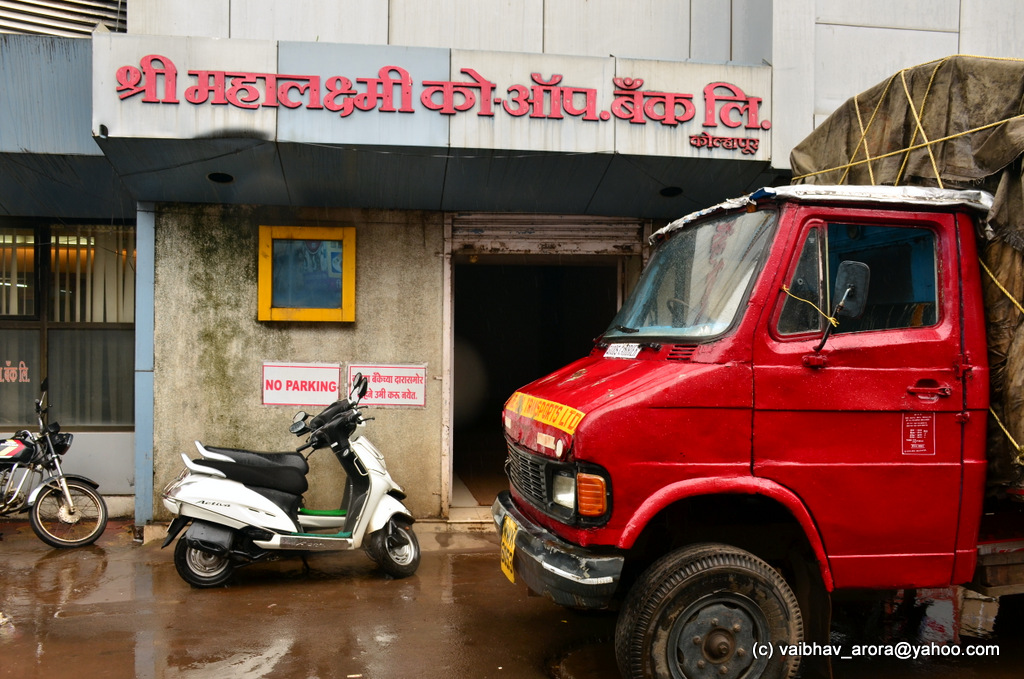 Apart from the temple, I had a rough list of places to visit – Bhawani mandap, Rankala lake, New Palace, and Phadtare missal Kendra were my must visit places. I was a bit less certain about visiting Panhala fort (my right foot was hurting again after the barefoot visit to the mahalaxmi temple) and I wasn’t very keen on the siddhagiri gramjeevan museum, though am told it’s very good. After the auto driver’s description in the morning, I was somewhat curios about visiting Jyotiba dongar. So I asked a shopkeeper directions for the new palace and he said it was quite far and I should get an auto – but in this part (behind mahalaxmi) there were none as traffic is restricted. I had little choice but to soldier on.

In this area, Chappal shops, for which Kolhapur is famous for abound. I did not intend to buy though people swear by their quality. A shop owned by a national award winner in the craft has this over-sized piece used as an advertisement prop. The shop’s called ‘Indian Foot Service’. 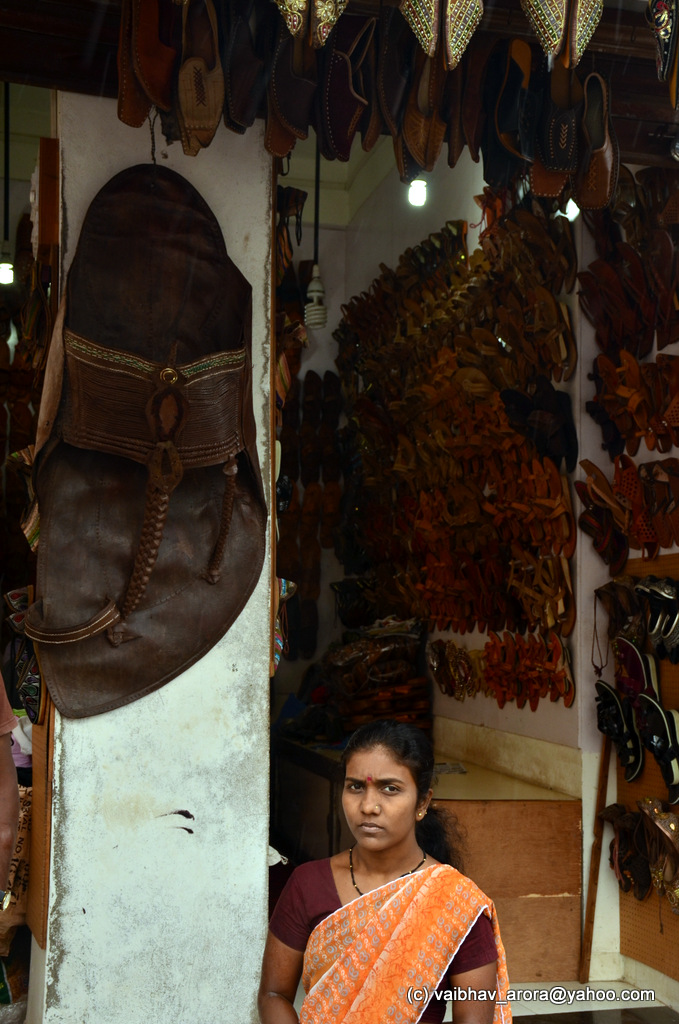 I was supposed to turn left but dead ahead of me was a lane devoid of traffic and at its dead end rose a few steps leading to a courtyard that housed at least one temple. That seemed enticing enough for me to go off track and walk up those stairs. On all sides the courtyard was enclosed by small houses, whose front doors opened into it – in the center stood a temple, a reconstruction atop something older, perhaps centuries. 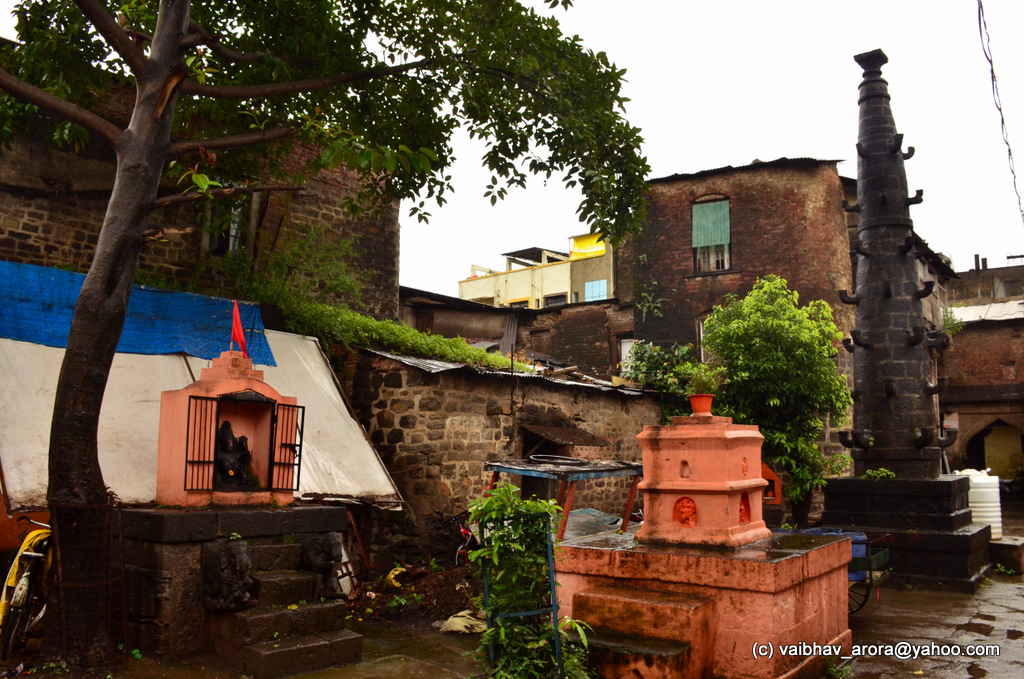 My suspicion was quickly confirmed when I spotted this ancillary temple on the left wall of the premises – a reconstructed pedestal flanked by two gaily carved elephants, each with a nymph led to the small enclosure on top that housed a chandi statue. It appeared to be several hundred years old. I looked around and while the main temple walls were also new and painted within last few years, there were elements the pointed that the collection of temples I was standing near were reconstructions of older structures. 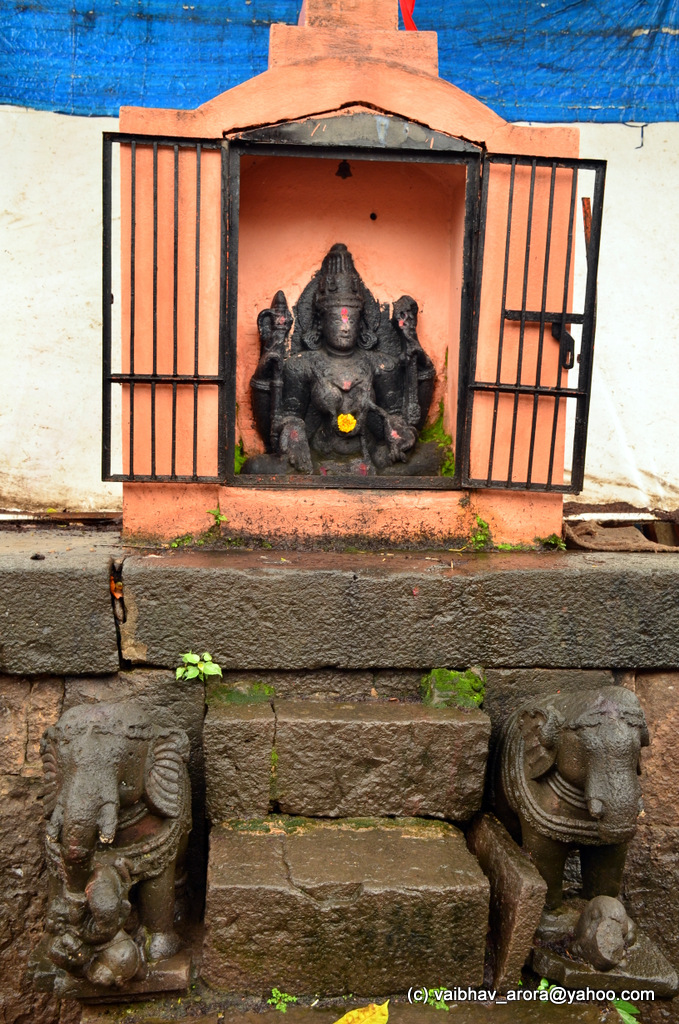 The drizzle died down and while I closed the umbrella, a slow meowing sound had me focus the lens atop the overhanging eave – it was a stray with half an ear missing. 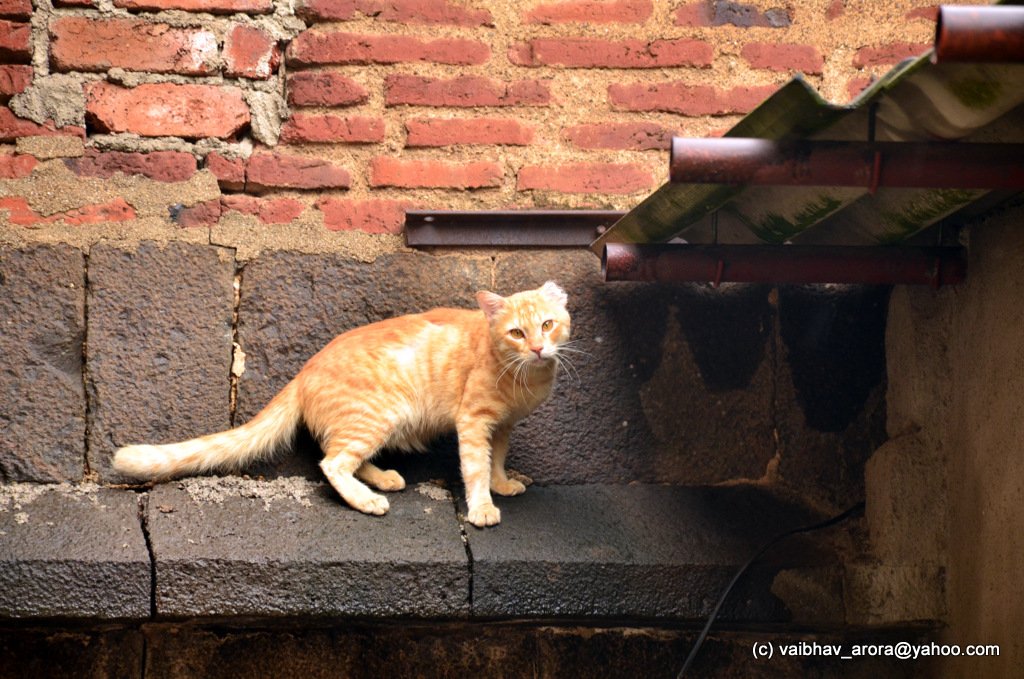 I didn’t see this man coming when he asked if I wrote for a magazine (must be the camera again), to which I said no, but I write online sometimes. 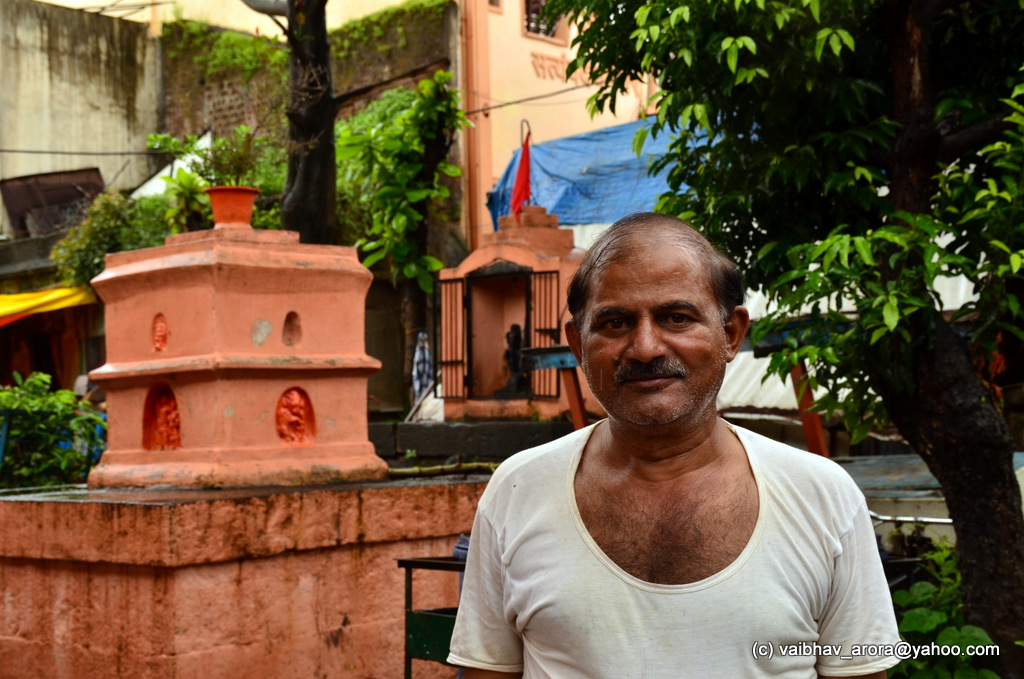 He smiled genially and pointed out many features I would have missed otherwise – these three inverted lotuses were saved from the rubble of the earlier jain temple and depict childhood, adult age and old age, respectively – I was told. 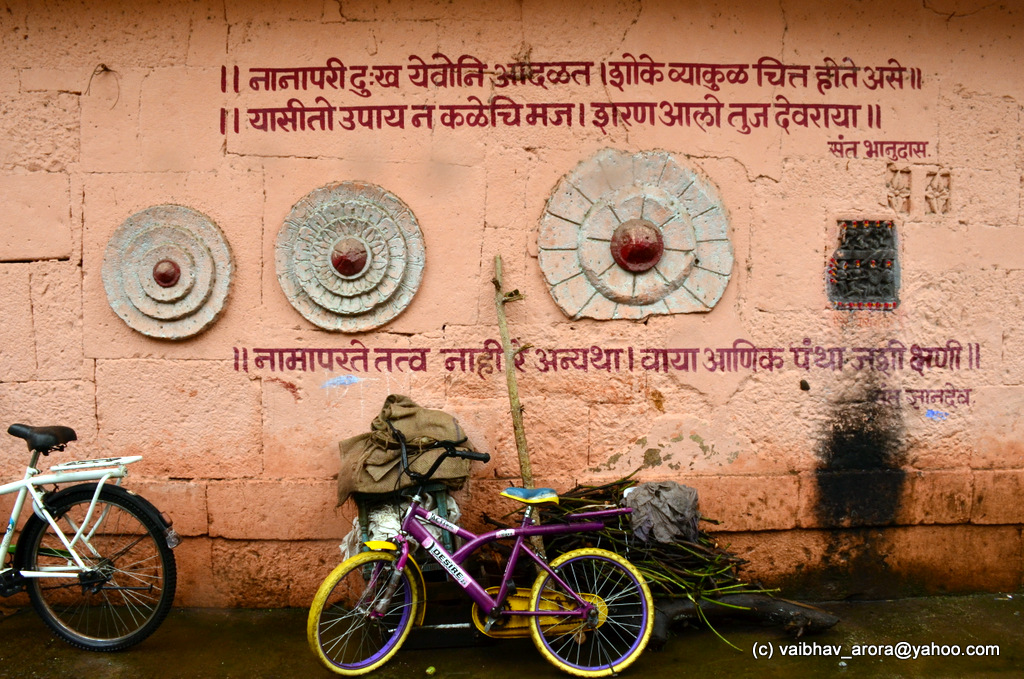 The deepa-stambhas were very large, about twenty feet or even higher and competed with the tree trunks in color – dark with a covering of moss, something in India that can be seen only during the monsoons. 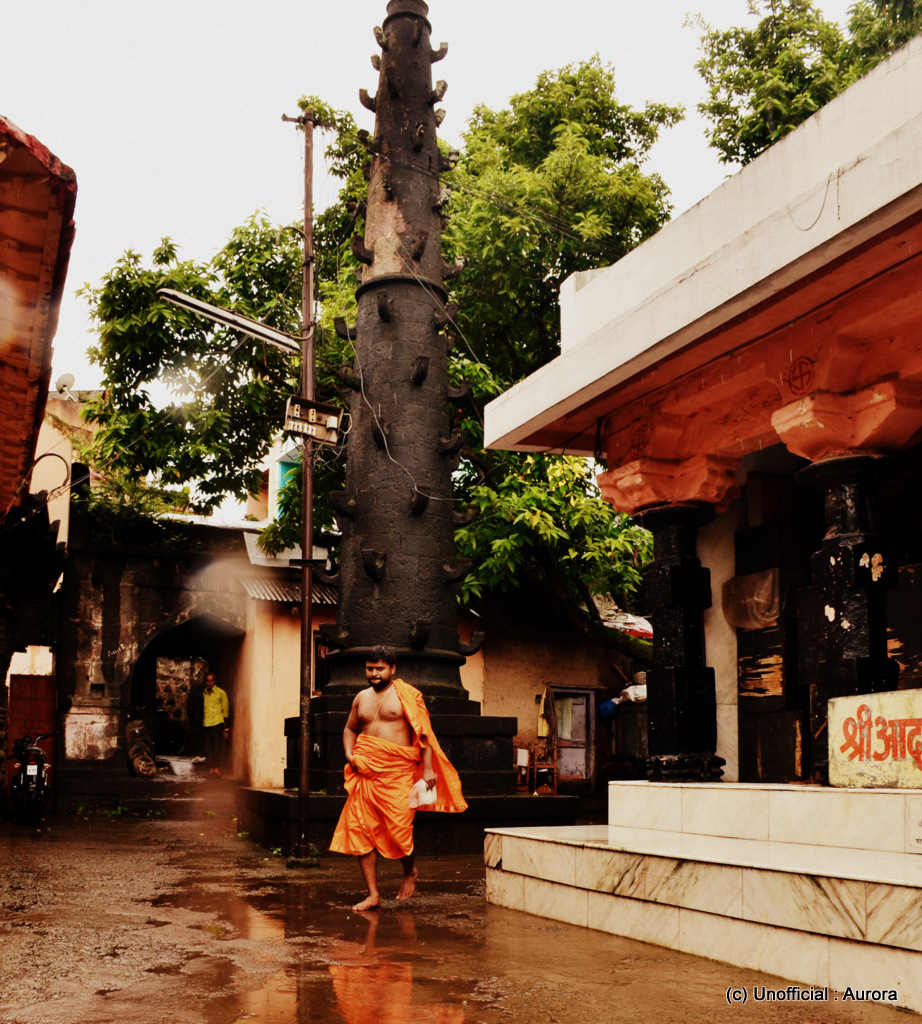 Travel means different things to different people. For me, the happiest moments are when there's a thrill of 'finding something', a sense of discovery. This was one such moment.

Rain picked up, and as droplets hit the camera lens, I ducked for cover. 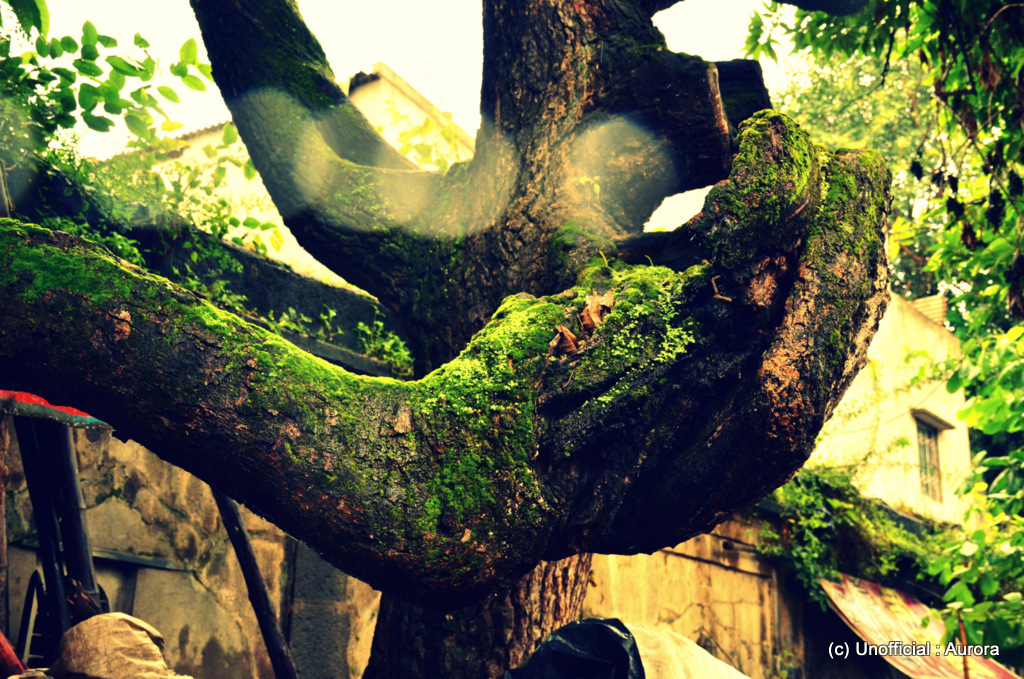