Restriction on Entry of Tourists from India and other countries due to COVID-19 (Corona Virus Pandemic) is till 30th April.
No one can enter by Road, Air etc. / any transport means. 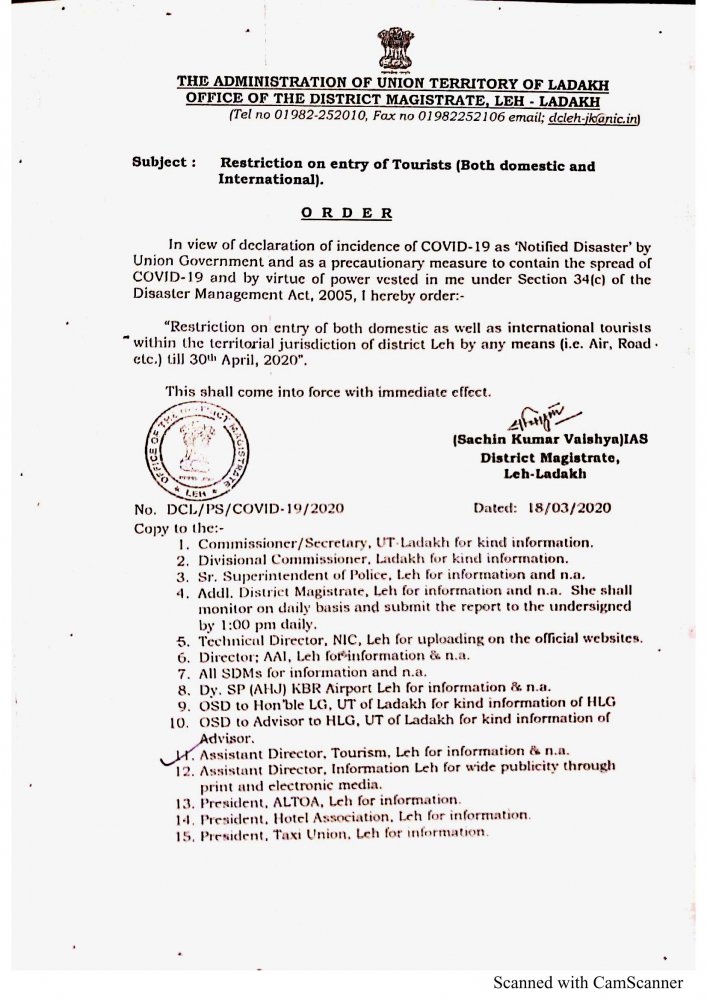 A Srinagar bound AI flight was returned this morning deboarding 25 passengers at Leh while other 81 who landed later have been quarantined. Henceforth all passengers coming from Leh shall have to quarantined. Pl note.

Coronavirus count 34: Two cases in Ladakh, one in Tamil Nadu
Over 150 contacts have been traced of the two US nationals who tested positive for the virus in Bhutan, and placed under community surveillance, sources in the health ministry said. 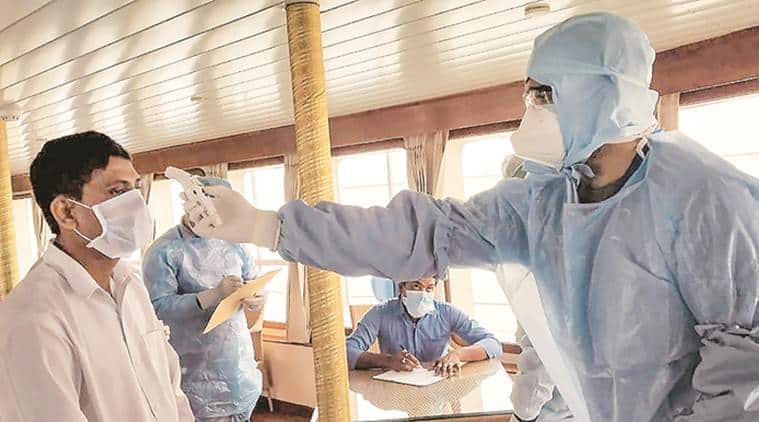 Passengers of a river cruise being screened in Jorhat, Assam, on Saturday. (PTI)


Three more people have tested positive for the novel coronavirus (Covid-2019), taking the count of those infected in the country so far to 34. Of the new cases, two are from Ladakh, with a travel history to Iran, and one person is from Tamil Nadu who had travelled to Oman. The Ministry of Health said all patients in India are stable and efforts are on to trace all the people they came in contact with.
Over 150 contacts have been traced of the two US nationals who tested positive for the virus in Bhutan, and placed under community surveillance, sources in the health ministry said. On Friday, Bhutan announced that the two Americans had travelled to various places in India before entering that country.
A flight from Iran has landed in India with the nasal and throat swabs of Indians stranded there. The 108 samples received from Iran on Saturday morning are being tested at AIIMS — only those who test negative can fly to India. Six scientists from the Indian Council of Medical Research (ICMR) have been stationed in Iran, and equipment and reagents, worth approximately Rs10 crore, have been dispatched to enable them to setup a lab there.

An Airport Authority of India (AAI) spokesperson said passengers from 12 countries – China, South Korea, Japan, Italy, Iran, Singapore, Thailand, Malaysia, Hong Kong, Vietnam, Nepal and Indonesia – would be segregated at international airports and not be allowed to mix with other passengers during “health screening, immigration and conveyer belt areas”. Kuwait has ordered the suspension of all flights to and from India and six other countries, reported PTI.
Prime Minister Narendra Modi on Saturday chaired a review meeting on the coronavirus situation in the country with officials of all ministries and departments concerned, and asked officers to plan the evacuation of Indians stranded in Iran. The Prime Minister also urged Indians to switch to “namaste” as a standard greeting to check the spread of the virus.
Modi asked officers to “identify best practices for Covid-19 management” from across the world and within the states and ensure their adoption. “He mentioned that in view of the opinion of experts, people should be advised to avoid mass gatherings as far as possible and be made aware of Do’s and Don’ts. He directed that an immediate exercise be taken up to identify sufficient locations for quarantine and also for critical care provisioning in case the disease spread. Officials were instructed to plan for early testing and evacuation of Indians from Iran,” said a PMO statement.
Among other issues that came up in the meeting were the need for continued vigil at all airports, seaports and land border crossings, community-level surveillance, and ensuring the availability of sufficient beds for isolation. Union Health Minister Harsh Vardhan emphasised the need for effective coordination with states for timely response. Secretary, Department of Pharmaceuticals, said that sufficient stocks of medicines, Active Pharmaceutical Ingredients (API) and other consumables are avialable for use in India.
Apart from the 31 patients who are being treated for the virus (the first three cases from Kerala have been discharged), close to 30,000 others continue to be under community surveillance.
“As many as 52 laboratories are now operational across the country for testing Covid-2019 virus. An additional 57 laboratories have been provided with Viral Transport Media and swabs for sample collection,” the Health Ministry said.
So far 7,26,122 people who have alighted from 7,108 flights have been screened at airports. Between Friday and Saturday, 73,766 passengers from 573 flights have undergone screening at airports.
As a precautionary measure, the Union Territory administration has ordered the immediate closure of all the primary schools in Jammu & Kashmir till March 31. Biometric attendance across the UT stands suspended and “no large social/official gathering” will be allowed until March 31, the authorities said.
In order to spread awareness, a special Covid-19 mobile phone caller-tune, with basic infection prevention messages, has been launched by all telecom operators. Over 117.2 crore subscribers of BSNL, MTNL, Reliance Jio, Airtel and Vodafone-Idea are being reached out to through SMSs and call backs.
The Ayush minister issued a second “advisory” for infection prevention, but withdrew it. An earlier one had been criticised for publicising unsubstantiated information about a virus of which very little is known.

A patient with travel history to coronavirus hit Iran died in a hospital in Ladakh Union Territory (UT) on Sunday and it could be the first death case of India ever since the outbreak of the deadly COVID-19.

Ladakh residents stuck In Iran: Pilgrims claim over 200 cases, MEA says ‘some’ positive for coronavirus
Till Monday, 389 Indians had returned from Iran by special flights, including 205 pilgrims 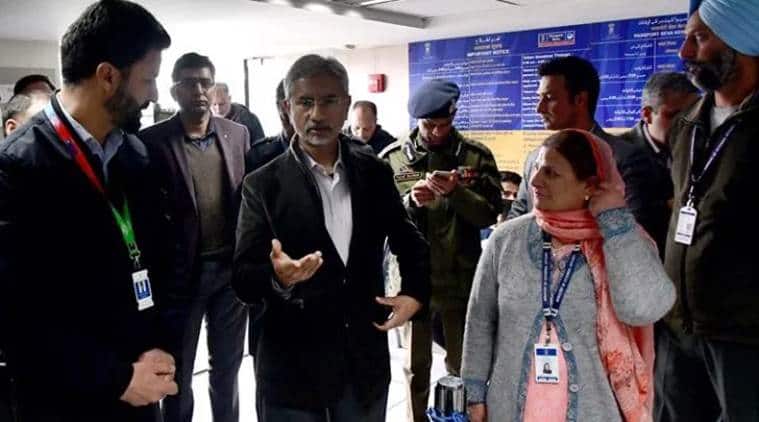 AMID reports that a large number of Indians in Iran had tested positive for coronavirus, the government Tuesday said it could only confirm “some positive cases”.
“It is quite possible that a country which has such a large spread of the virus could have some positive cases among indian nationals. But I cannot confirm to you if the list which is being circulated on social media is correct. Be rest assured that our Embassy in Iran is in touch with them and taking necessary steps to ensure their well-being,” Ministry of External Affairs Additional Secretary Dammu Ravi said at a media briefing Tuesday.

Last week, Ravi had said they would bring back only those Indians from other countries who test negative for coronavirus. “If Indians test positive elsewhere, we would expect the country they are in to take care of them, like we are doing with the foreign nationals (here),” he said on March 12.

Till Monday, 389 Indians had returned from Iran by special flights, including 205 pilgrims.
On Tuesday, Iran issued its most dire warning yet about the outbreak, suggesting “millions” could die if the public kept travelling and ignoring advisories. A state television journalist gave the warning hours after people pushed their way into two major shrines that had been closed over fears of the virus. More than 16,000 of the over 18,000 confirmed cases of the virus across the Middle East have been reported in Iran, with the country’s death toll rising by 135 on Tuesday to 988. Residents of Ladakh in Iran on pilgrimage told The Indian Express that they had been informed by the Indian Embassy that over 250 of them were positive for coronavirus. One travel agent from Kargil, stuck in Iran’s city of Qom, said the list had been shared by the Embassy on a WhatsApp group created recently to keep them updated.
Several of them told The Indian Express over the phone from Iran that over 800 Indians were currently stranded in Qom. A 44-year-old pilgrim from Leh said he and 18 others in a 53-member group had tested positive, but no effort had been made to segregate them from those who didn’t have the infection. “My sample was taken by an Indian Embassy team a week ago. We have been informed that 19 of us are positive. From day one, we have been demanding that we should be kept in isolation.”
The Kargil resident said the Indian Embassy had not been of any help. “There is not a single mask available. When we visit the local hospital, they say you are fine, there are no symptoms.”
Another pilgrim in Qom, urging the Indian government to take them back, said, more than 200 “positive” cases had been shifted to a facility provided by Iran.

Coronavirus: No international flights will be allowed to land in India from March 22 for a week

Coronavirus Shutdown: No Foreign Flights Starting Sunday, Work From Home For Most

The government has advised citizens above 65 to stay at home unless they are public representatives or doctors or government employees.

New Delhi: No international flights will be allowed to land in India from Sunday for a week, the government announced today escalating measures to fight coronavirus. In a notice hours before Prime Minister Narendra Modi's address to the nation, the government also urged work from home for most and said those below 10 and above 65 should stay home. Coronavirus cases in India climbed to 173 on Thursday after 18 new cases were reported. To check the spread of coronavirus, which has claimed over 8,000 lives globally and infected more than two lakh, India had already suspended visas for the vast majority of foreigners seeking to enter the country.

Here are the top 10 points in this big story:

Coronavirus Shutdown: No Foreign Flights Starting Sunday, Work From Home For Most

Coronavirus in India Latest Updates
2 test positive in Ladakh; cases climb to 10 in UT
Two more persons have tested positive for coronavirus in Ladakh, taking the number of such patients in the Union Territory to 10, a senior government official said on Friday.
Commissioner Secretary (Health) Rigzin Samphel said both the latest cases were from Choshot village of Leh, which was already notified as a containment area by the district administration.
"After the reports of the two patients came positive, they were immediately shifted to an isolation ward in a hospital here by health officials," Samphel told reporters.
He said the test reports of 55 more patients, including 11 taken on Friday, were sent to a laboratory in Delhi. Officials said the condition of all the coronavirus patients in the Union Territory was stable.