Excellent clicks (treat to the eyes) & Wonderful write up...

Awaiting the next update...

Sorry for posting after a long time. Actually I was on a trip to Himachal. Will talk about that trip after I complete this one. Please enjoy next part of the vlog below while I am preparing the photographs.

We started our descend from 5065 meter high Lachung La through snowy roads with several bad patches and water from the melting snow flowing on the road. After descending for around 6 Kms we reached the valley floor through which a water stream was running.

Ascend to Nakee La started soon once we crossed the water stream. Nakee La is located at a height of 4739 Meters above MSL and with this pass our drive to cross 5000+ metre MSL also ended. Road to Nakee La was also not in good condition apart from few kilometers before the pass.

This video covers our journey upto this point. Now enjoy the video from beginning to end to know about our Leh Ladakh India Tour in detail.

Thanks Umesh for the appreciation
S

We started our descend from Nakee La through snowy roads however unlike Pang to Nakee La route, we were welcomed with good roads baring 1 or 2 bad patches.

We soon reached the top of Gata loops which as 21 loops or hairpin bends that brings you down from 4667 meters to 4201 meters in 10.3 kilometers. There is a ghost in Gata Loops and watch the video to know the detailed story behind the ghost. We offered water bottle to the ghost at 3rd bend of Gata Loops. Once we descended we started driving along Tsarap Chu or Tsarap river which is a tributary of Zanskar river.

Next point was the bridge over Whiskey Nala or rivulet and then we crossed bridge of Brandy Nala followed by bridge of Twig Twig Nala. These names along with the wonderful views all around actually intoxicates you.

Soon we reached Sarchu, a major halt point with several tent options for stay, at a height of 4290 meters. Sarchu is also the border post of Ladakh and Himachal. As it was only 3 PM when we reached Sarchu, we decided to cross Baralacha La and stay at Jispa. We were not keen in staying in Sarchu as only dhaba tents are available and work was going on in other tents and were not ready for stay.

However, we were not allowed to go further citing a traffic jam at Baralacha La top. We were stranded there with no assurance from police about when the jam will be cleared.

This video covers our journey upto this point. Watch my next video to find out what happened to us next and have we succeeded in our plan or not. Now enjoy the video from beginning to end to know about our Leh Ladakh India Tour in detail.

We checked out of the hotel at Leh, loaded our luggage and started our journey towards Nubra Valley through Khardung La, world's highest all weather motorable road. We started around 8 AM. Leh city accompanied us for several kilometers as we started to ascend Khardung La.

Once we exit the city limit, we were stopped by taxi union persons who checked our documents and were satisfied that we are not driving an outstation taxi. Note that non-Ladakhi taxies including self driving cars are not allowed by taxi union to carry tourists for sightseeing. Though there is no such law, the law keeping authorities are ignorant about this practice.

There is nothing much to narrate. Please enjoy some photographs till we reach South Pulu where our permits were checked. We took around 1 hour to cover the distance and the road was in excellent condition.

Tsomo castle visible on the road 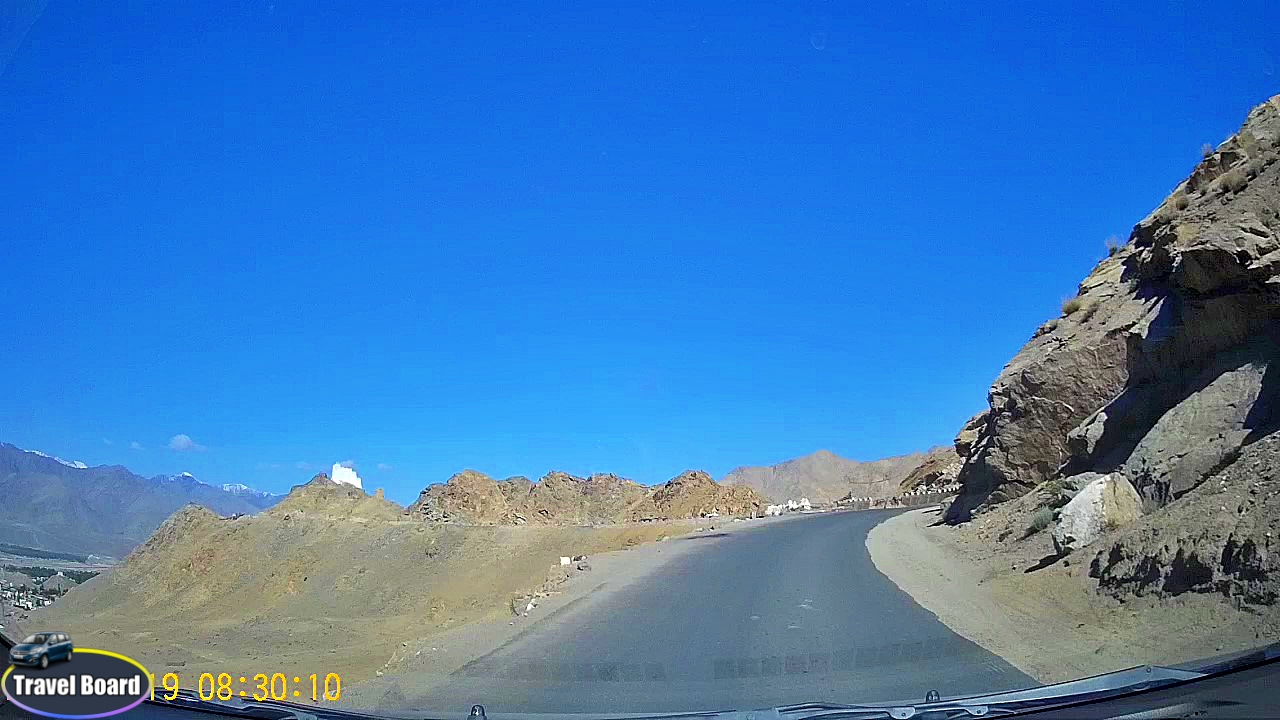 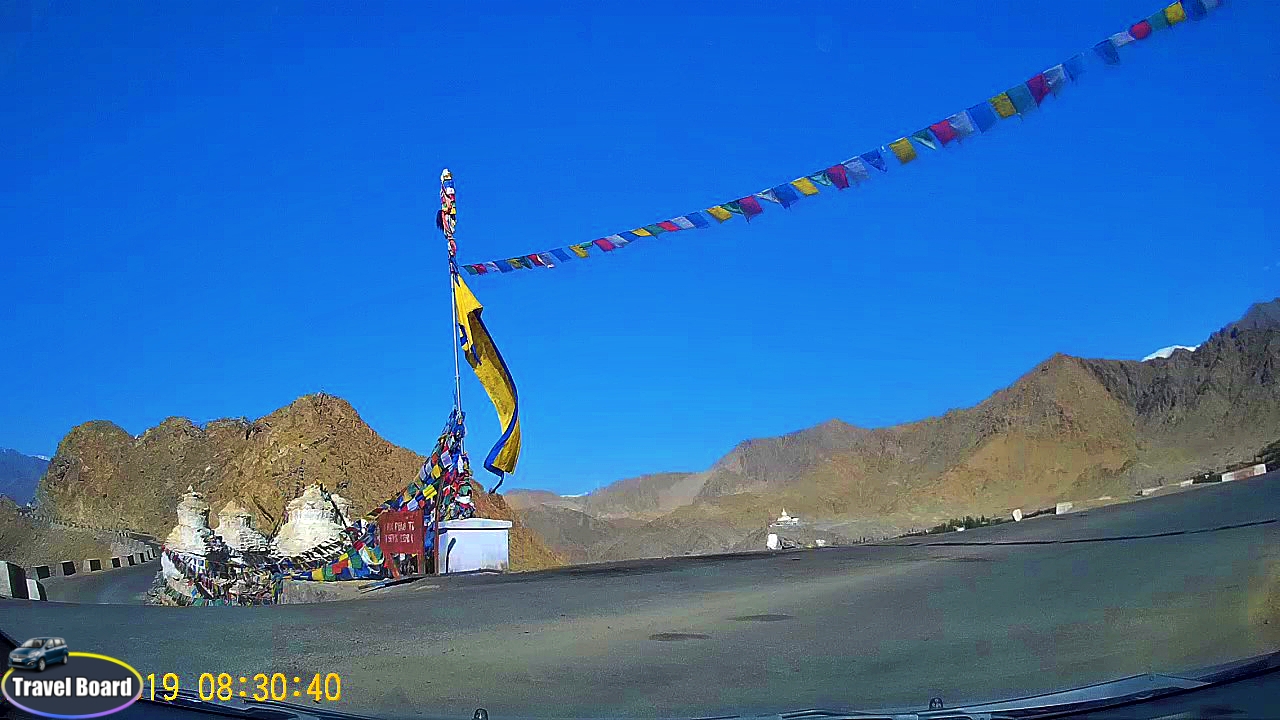 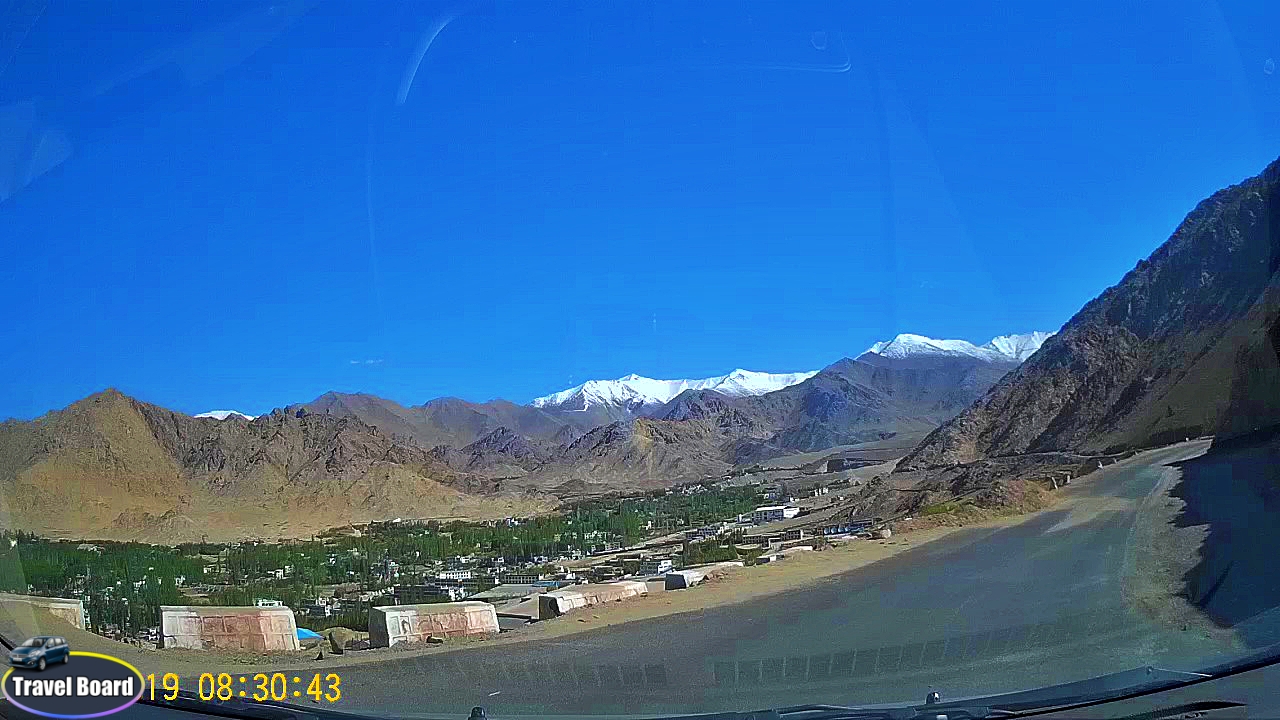 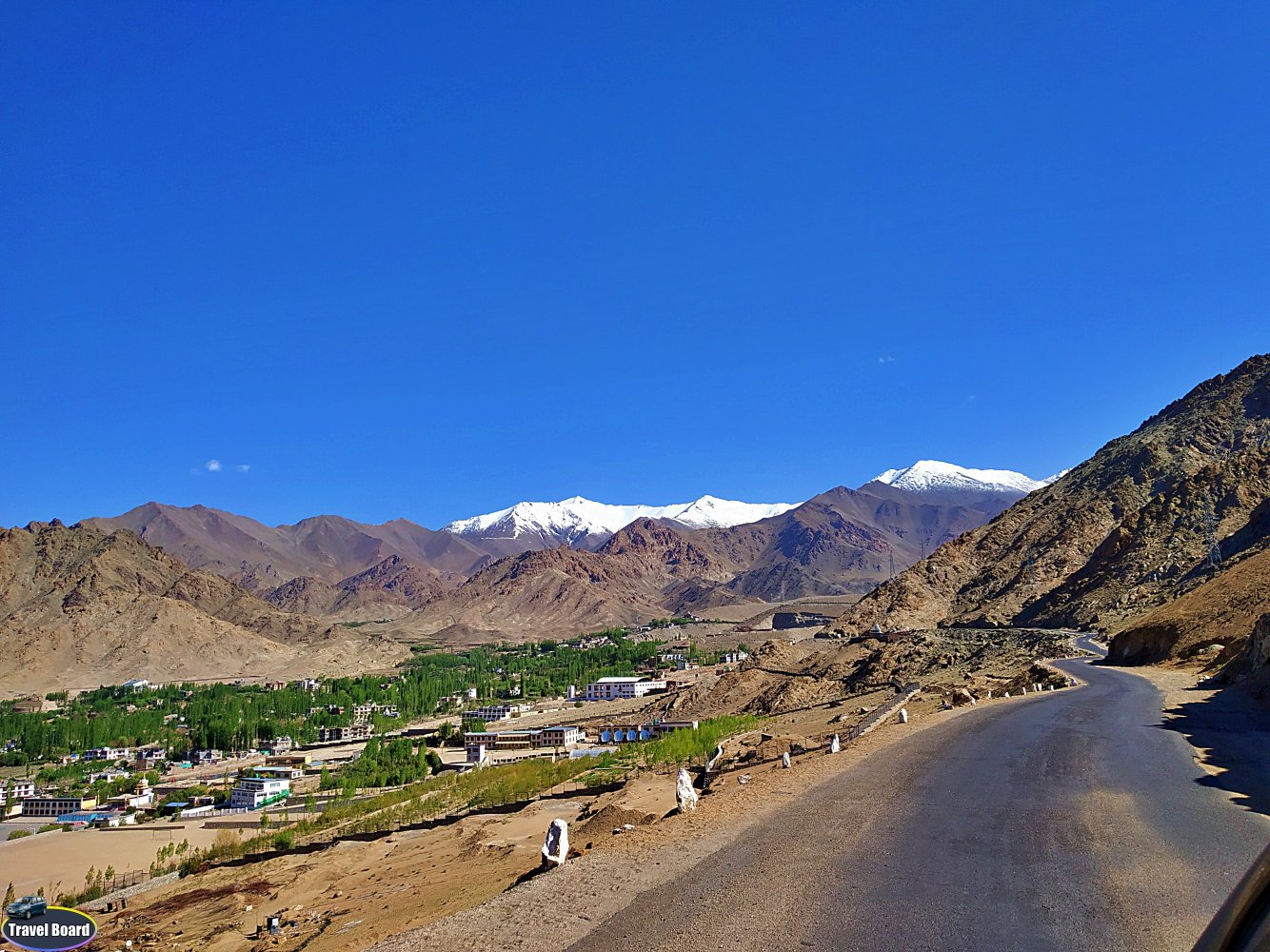 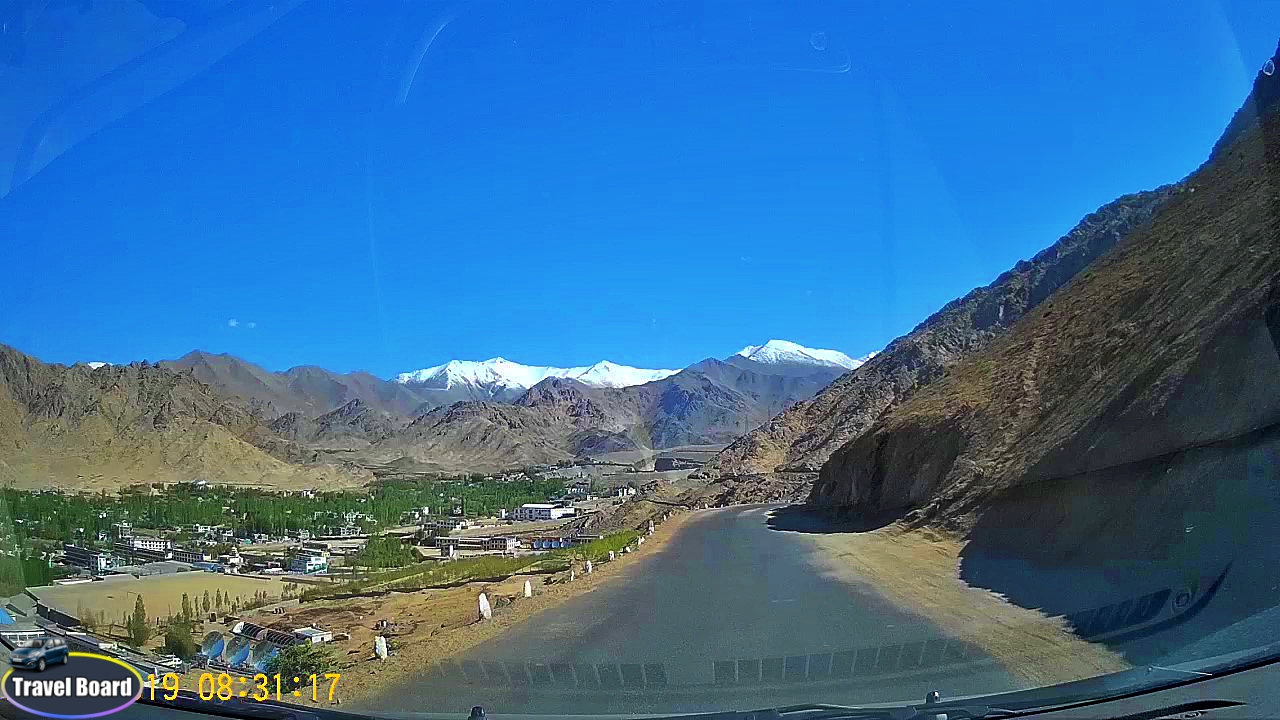 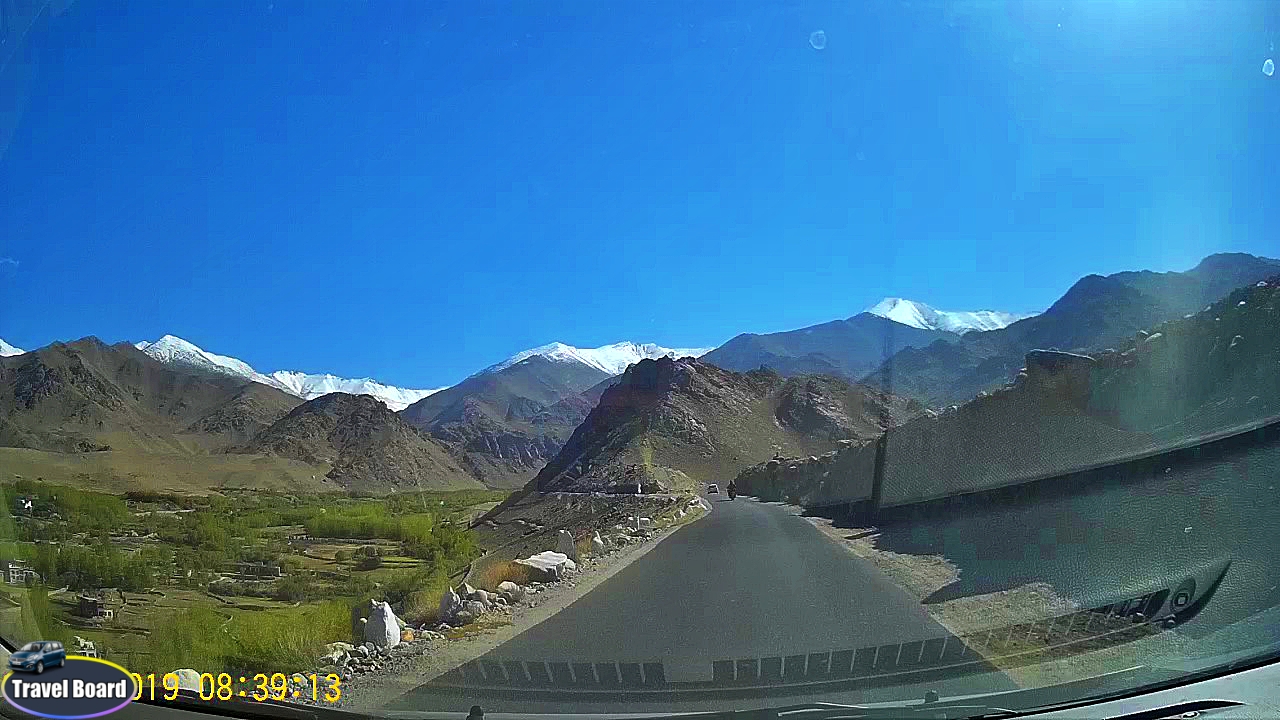 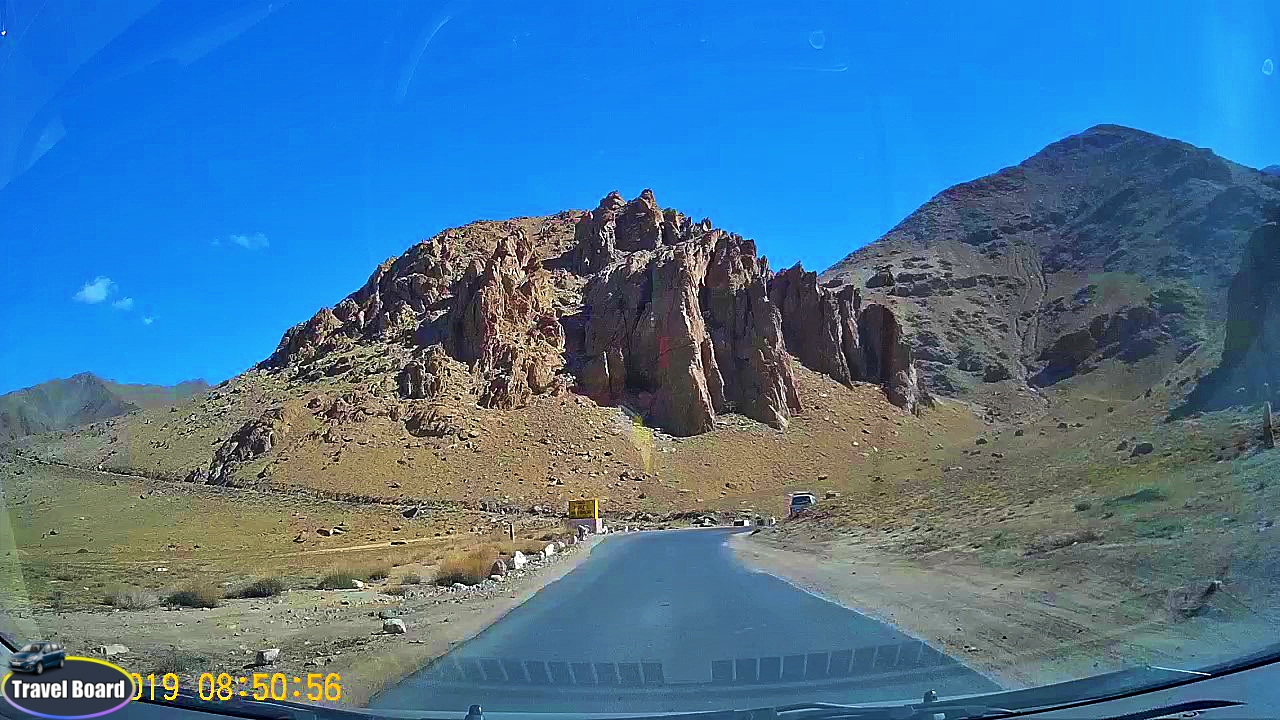 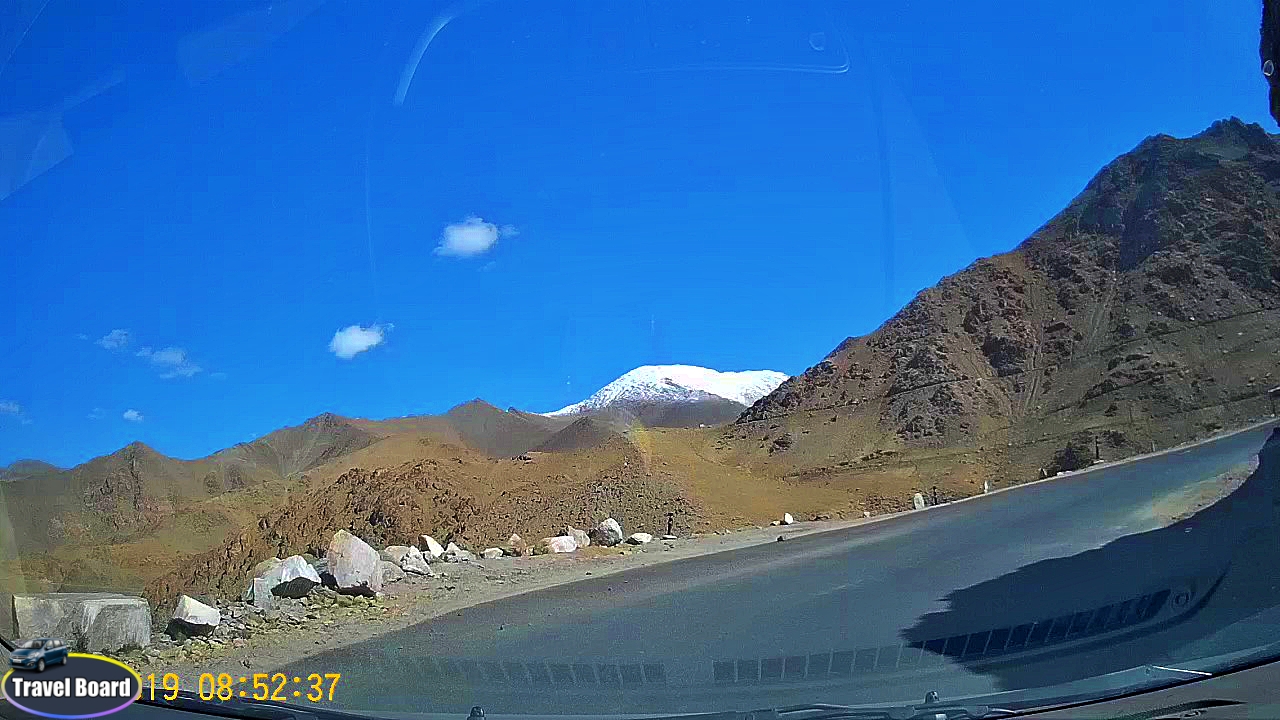 Leh valley visible far below on the left 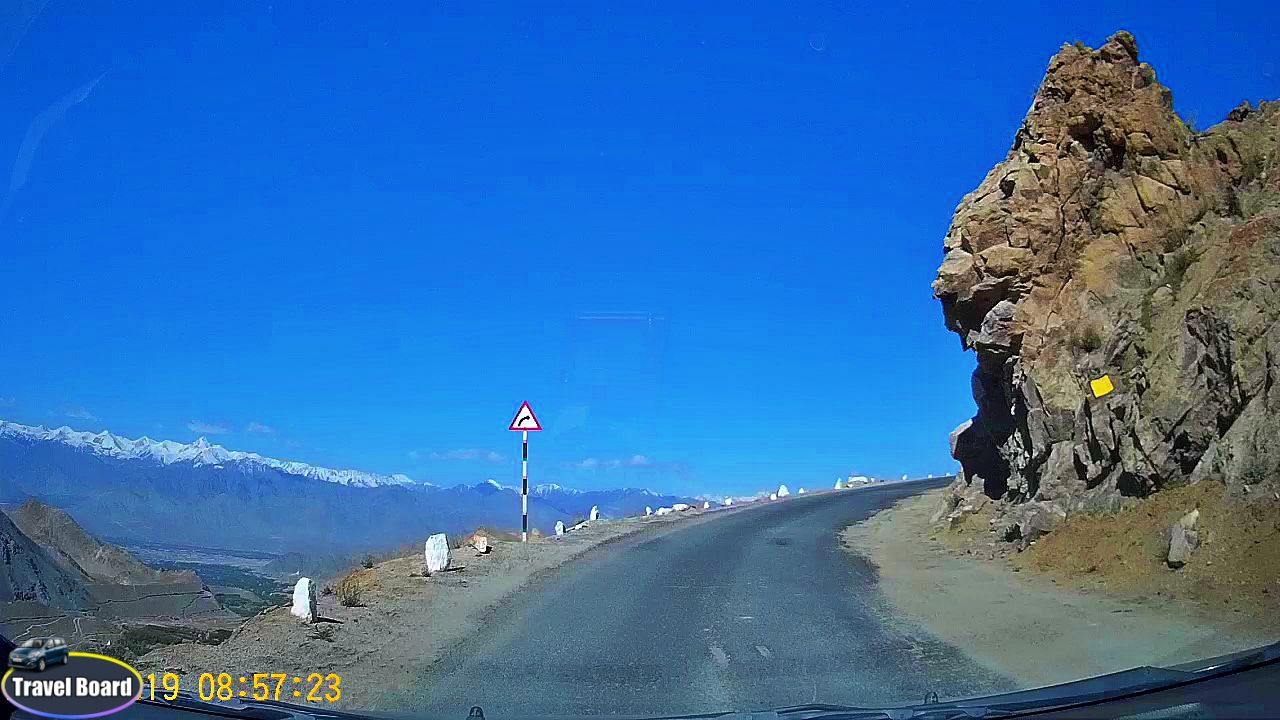 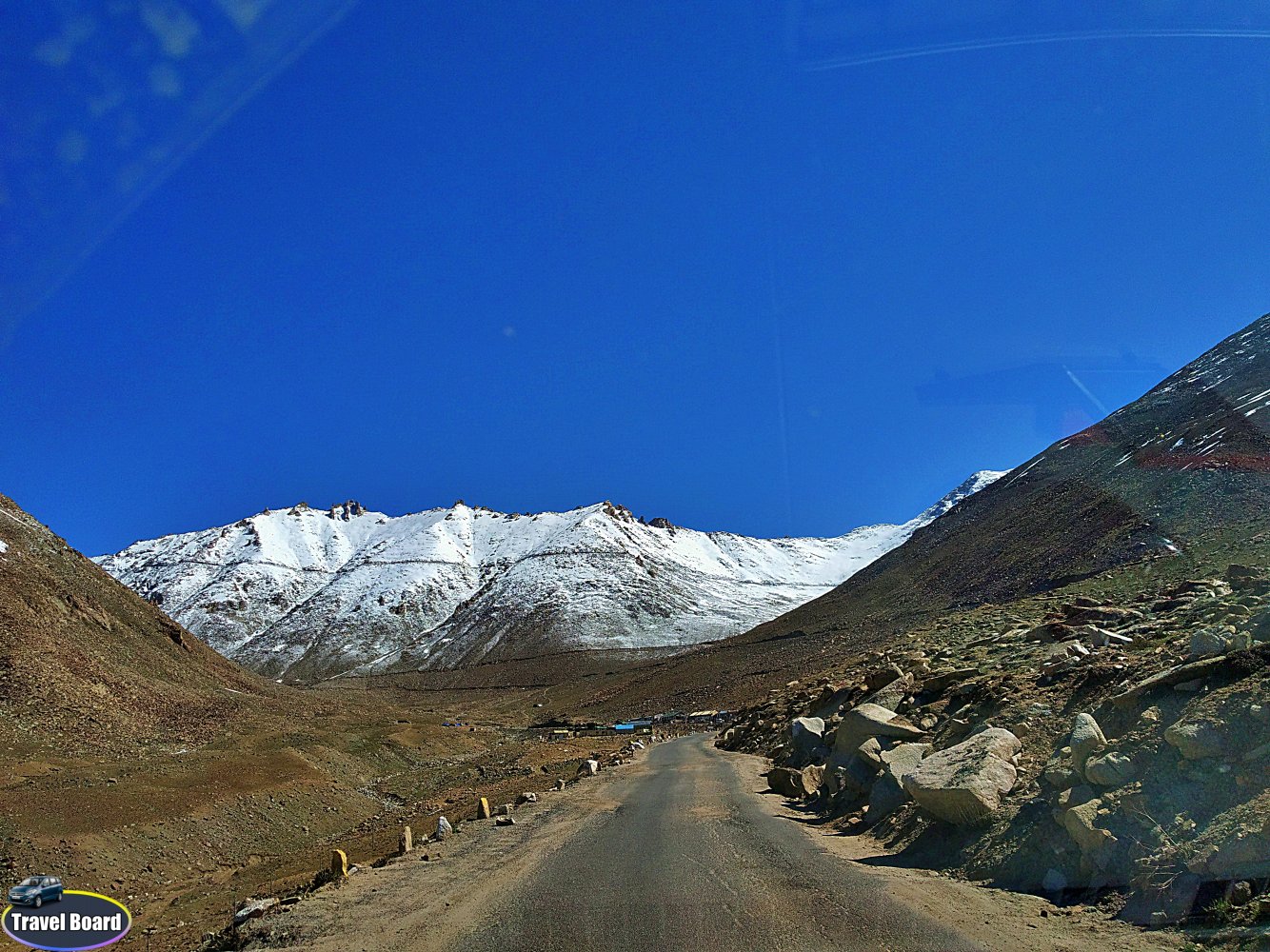 After spending sometime at South Pulu, we started our final ascend to Khardung La. After a couple of kilometers the tar road vanished and was replaced by gravel road, however the road was wide and easy to drive. Soon ice started appearing on roadside which gradually increased as we gained height. The views around was mind blowing. 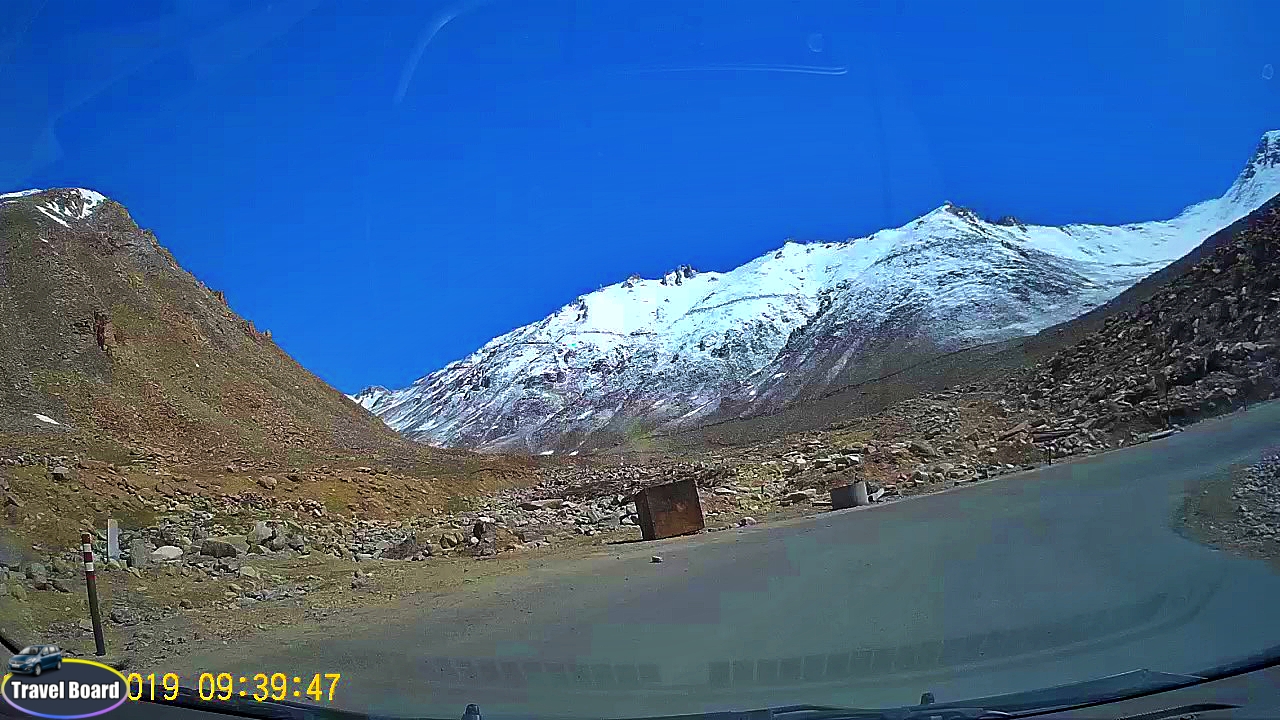 Can you spot the road on the mountain in front 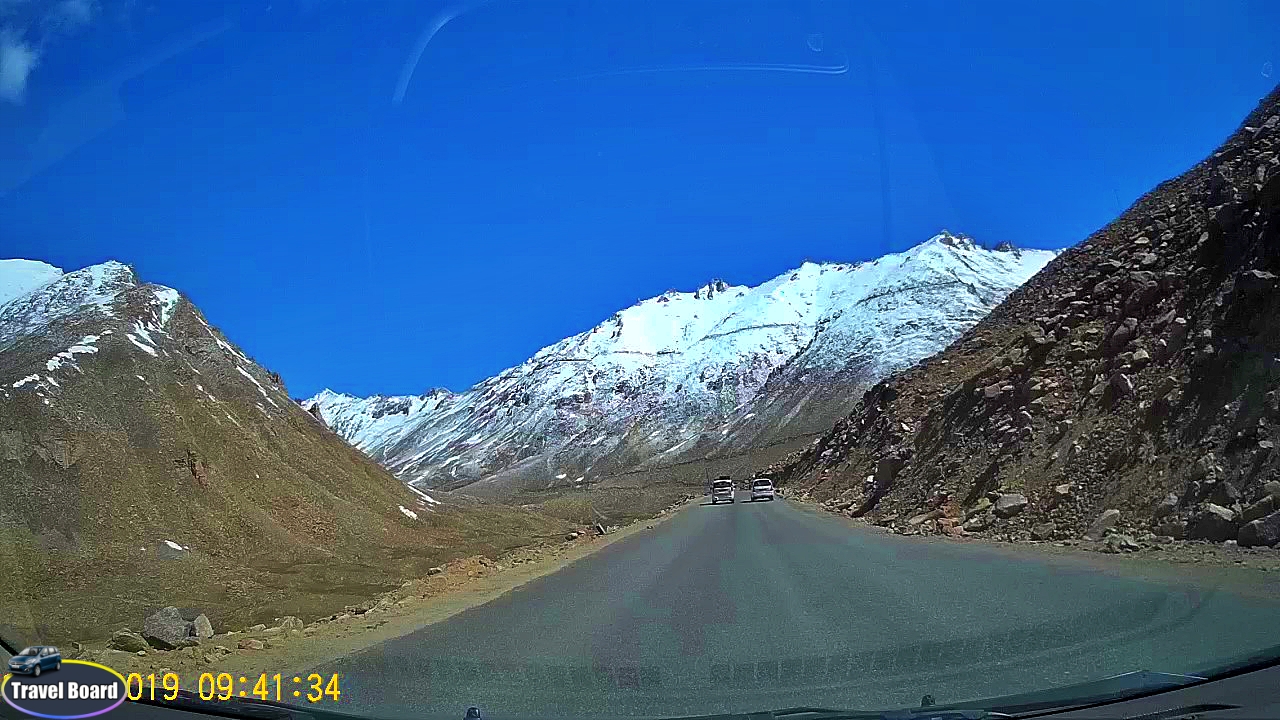 About to climb to snowline 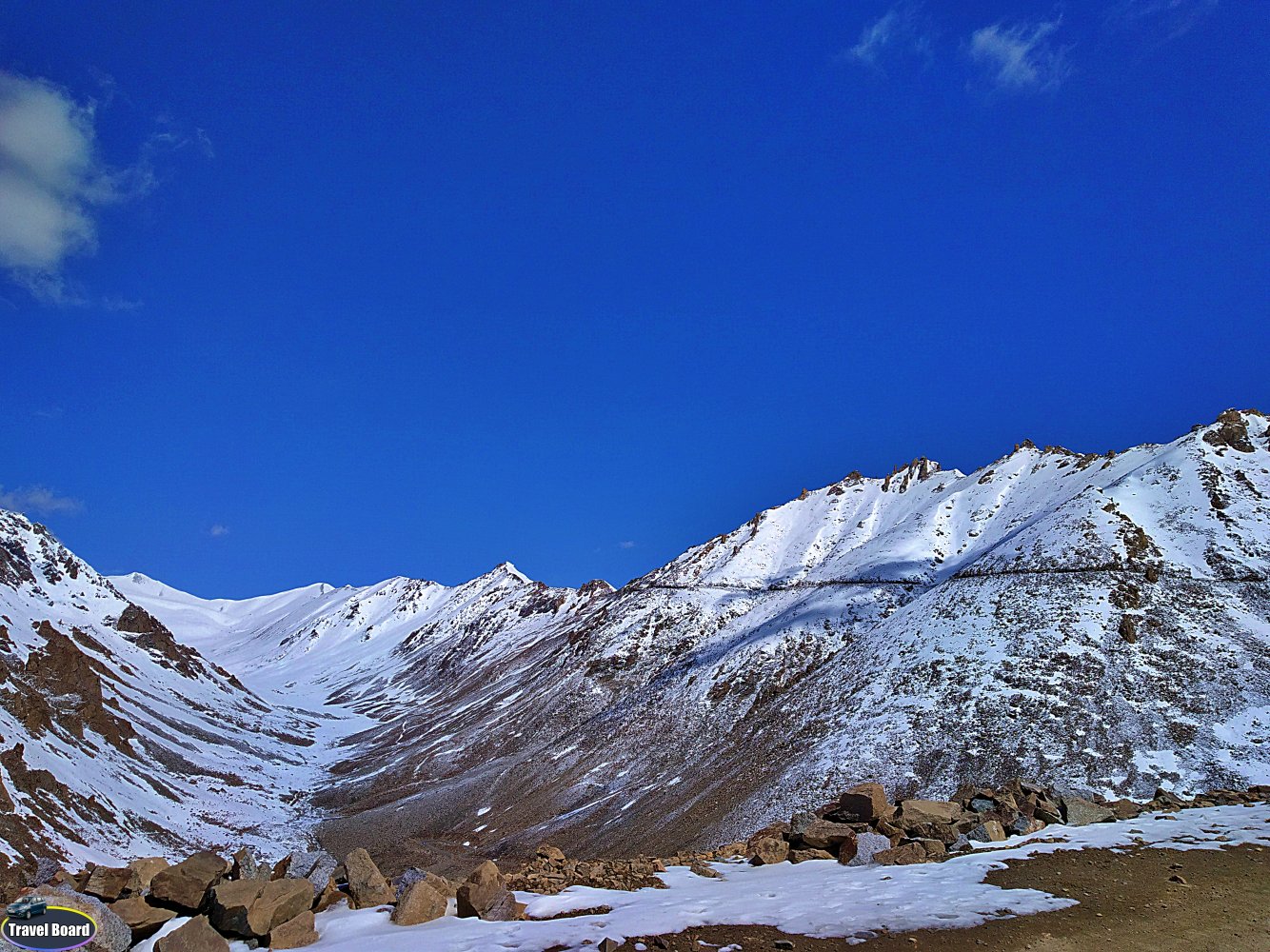 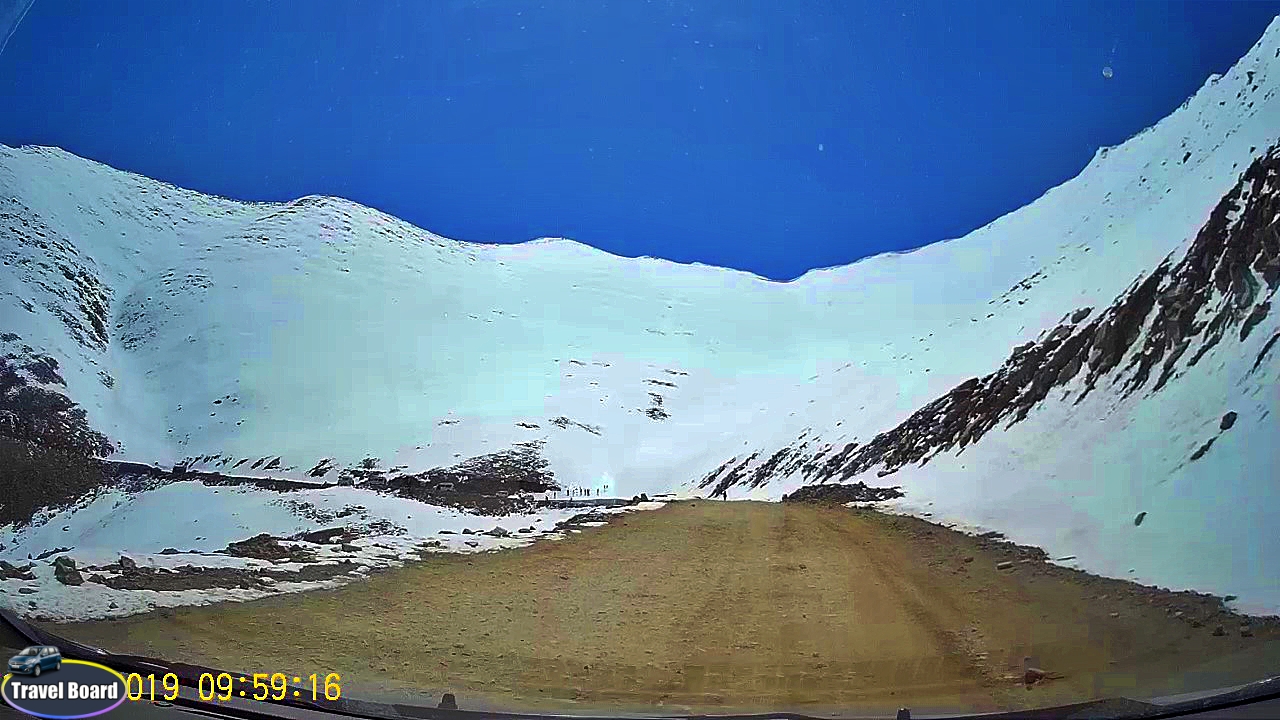 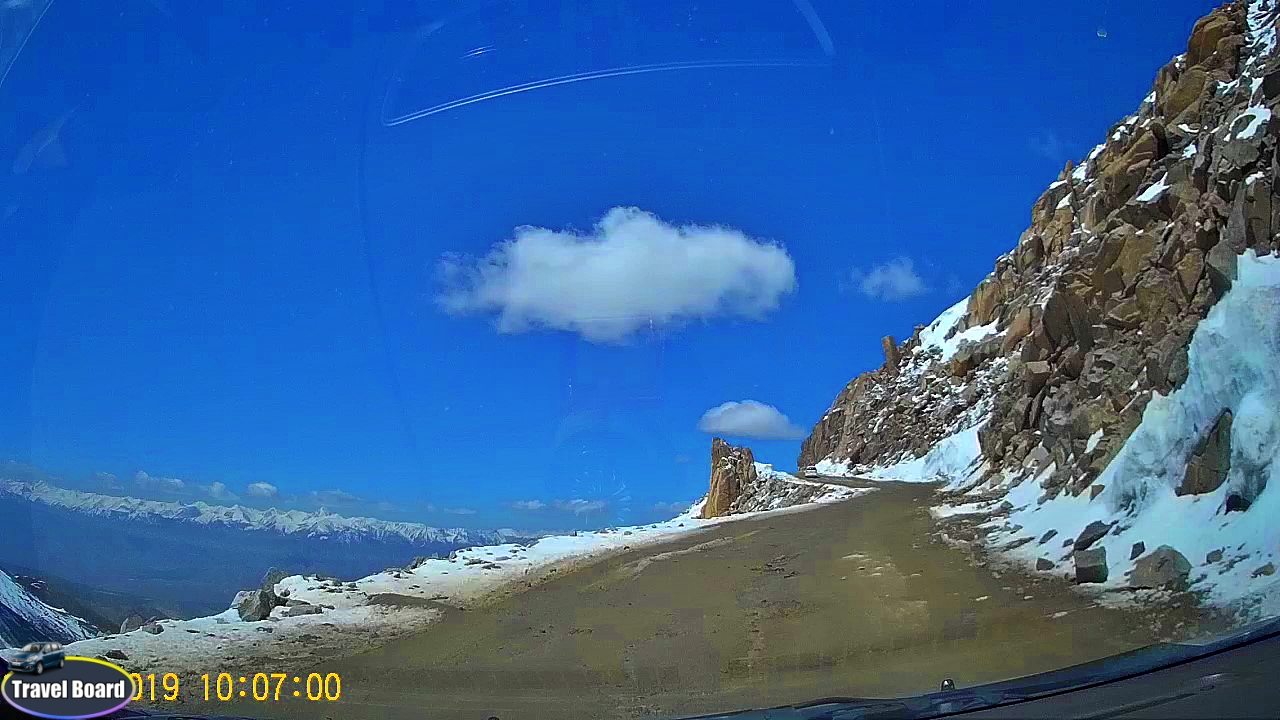 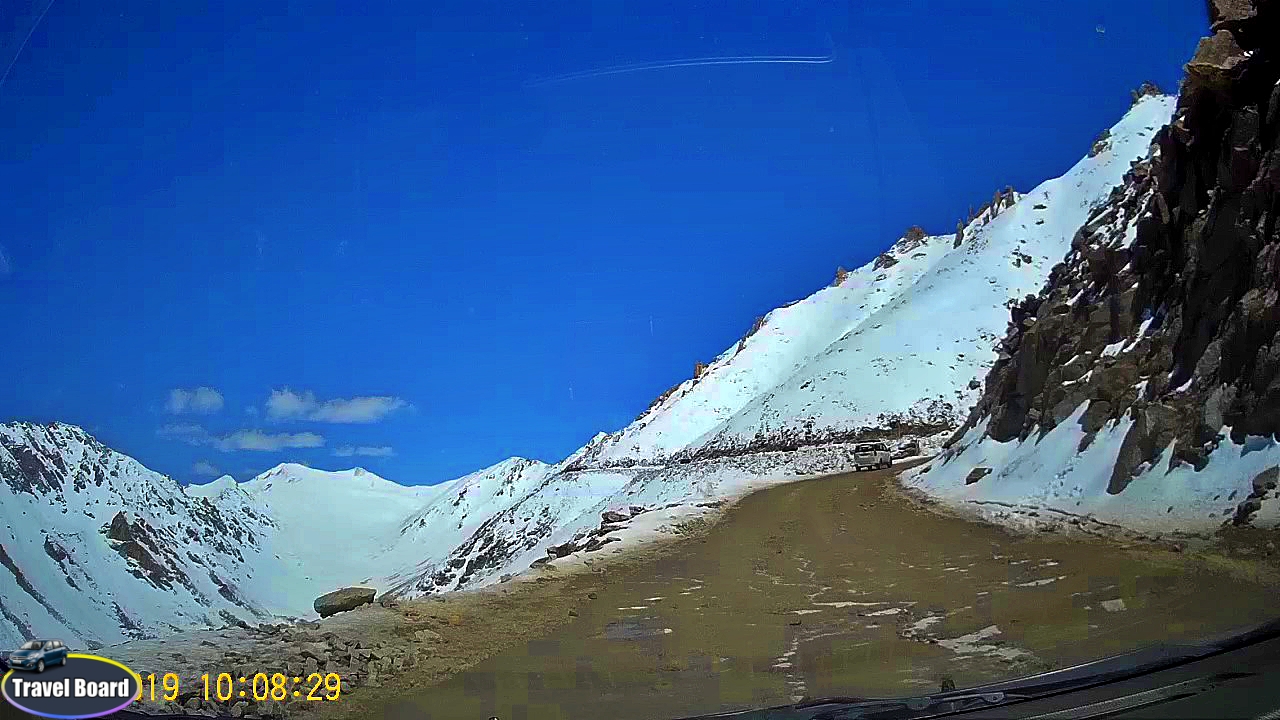 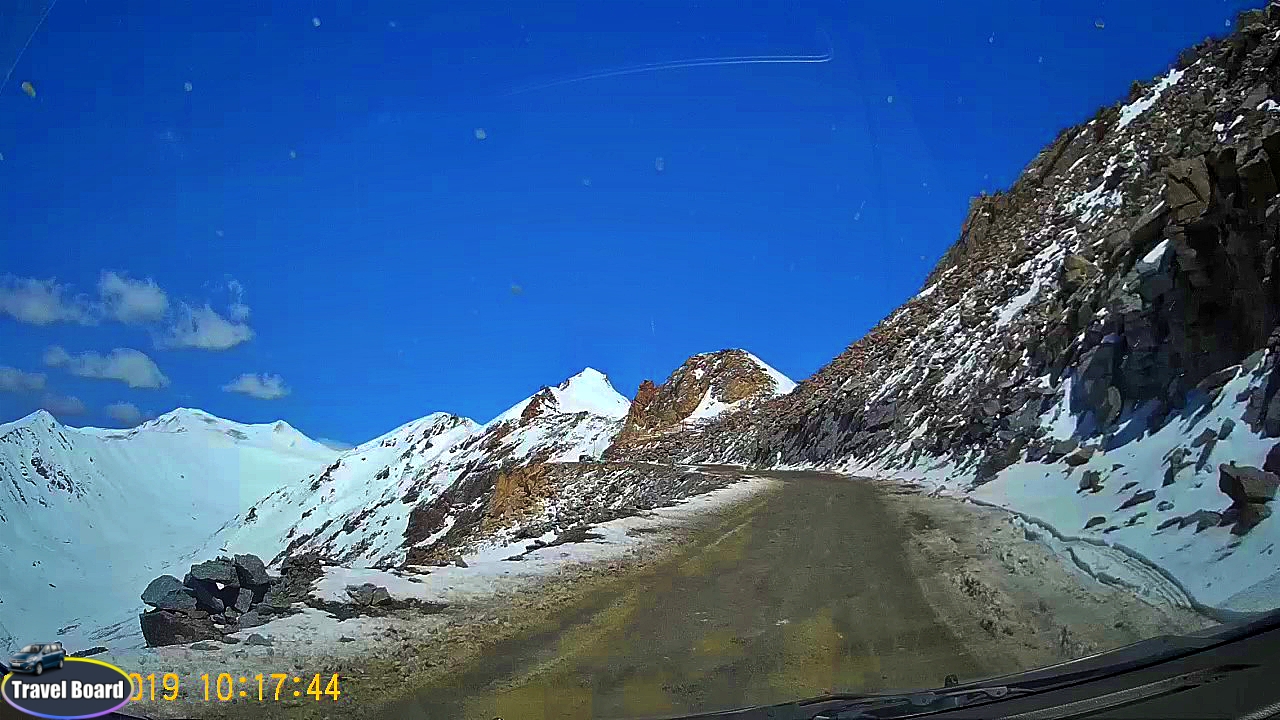 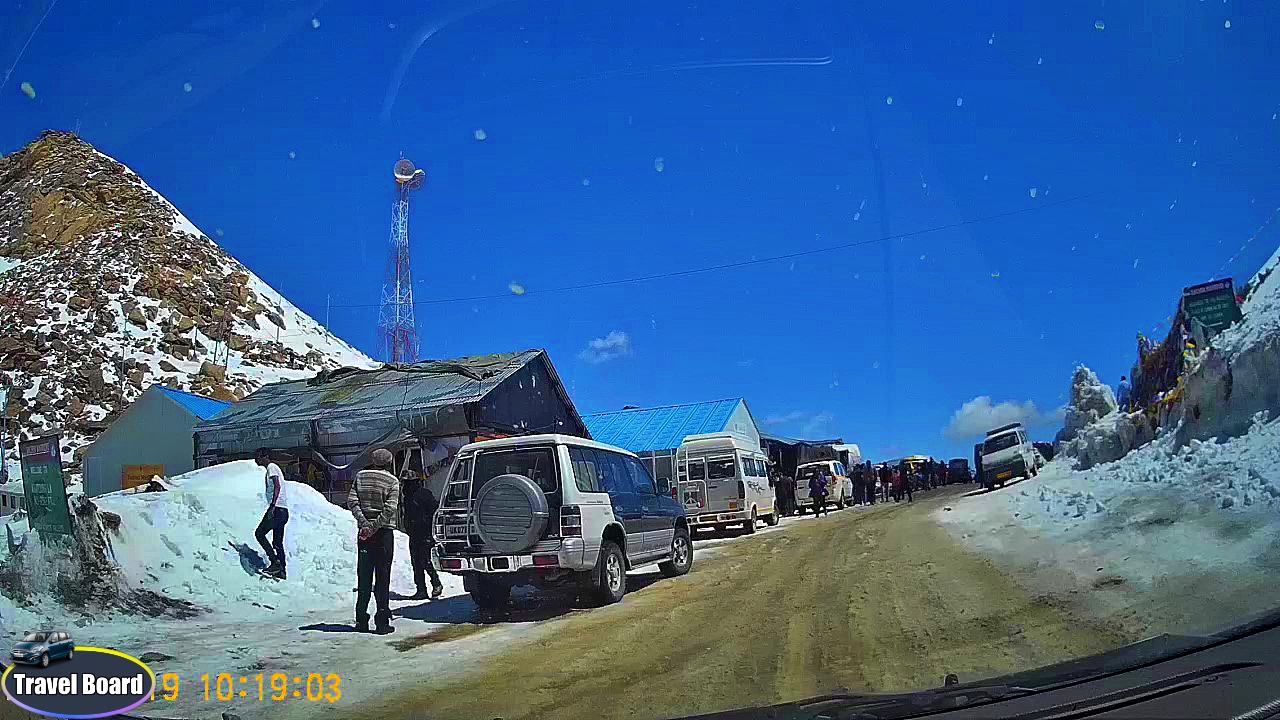 We reached the pass at around 10 AM. Khardung La is located at a height of 5359 meter above MSL. It also has a army dispensary and world's highest cafeteria. We spend around 10 minutes here and started to descend from the pass. Video link to this part is in below link. Will continue the blog in next post.

Hello Friends. Presenting sixteenth part of our Leh Ladakh Road Trip series covering our return journey via Leh Manali Highway from Sarchu to No Where.

After waiting for more than an hour at Sarchu we are allowed to proceed into Himachal Pradesh. However we were greeted with mostly gravel roads with few tar roads in between and so the progress was slow. We targeted Jispa as our night halt point which is around 85 Kilometers from Sarchu and with around 3.5 hours left, we were pretty sure that we will make it to the destination before nightfall.

Ascend to Baralacha La started at Keylong Sarai, proposed north portal of Baralacha Tunnel, and bad potholed road also started. At some places the potholes were very deep and with water from melting ice flowing over it which was making the drive difficult.

We reached Bharatpur at around 5 PM and there was no tents available there as the place was full of snow. Traffic Jam started as soon as we crossed Bharatpur and could cover around 3 Km in next 45 minutes.

3 Kilometers before Baralacha La at around 6 PM, we got stranded and have not moved a inch till 8 PM when I closed this video. It was dark all around and we were just hoping the jam to clear up before the temperature drops otherwise it would be difficult to survive in this cold. We were also hearing stories from people around on how these traffic jams are frequent at Baralacha during June / July which sometimes lasts couple of days also.

This video covers our journey up to this point. Watch my next video to find out for how long we got stranded in this place and weather we could make it to our destination. Now enjoy the video from beginning to end to know about our Leh Ladakh India Tour in detail.

Another set of Fantastic, Fabulous & Fantabulous Clicks And Videos...