Life is not about the destination, it is all about the journey which you take. This was our dream road trip like it is for every biker, traveler who wants to ride and drive to Leh Ladakh.

We wanted to travel to Ladakh in November 2021 when we reached Darcha but we had to return back since the Leh-Manali was closed for six months due to snow. Though we couldn’t travel to Ladakh but that road trip of 10000KM gave us countless memories but deep within our hearts we knew the pain of not being able to reach Ladakh.

In 2021, since we traveled from Chennai which is the southern part of India to reach Ladakh so we were not sure when would be the next time to come back again. Traveling is fun for us but it also cost us a lot because we travel by car and with family.

It was March 2022, when we started planning our new road trip for this year and there was no confusion about where we have to go. It was Leh-Ladakh, our dream destination.

We started preparing for our road trip because it would require a lot of planning to travel 1000’s of KM again from Chennai to reach Ladakh covering the length of our country Bharat. There were few gadgets, cameras, warm clothes, etc were purchased. The car got serviced just before the trip so that we don’t face any issues while traveling.

Traveling to Ladakh is not something which you can do anytime because for about 6 months Ladakh gets cut off from the rest of the country due to snowfall. The roads are completely blocked where no vehicle can pass through the roads and high passes. 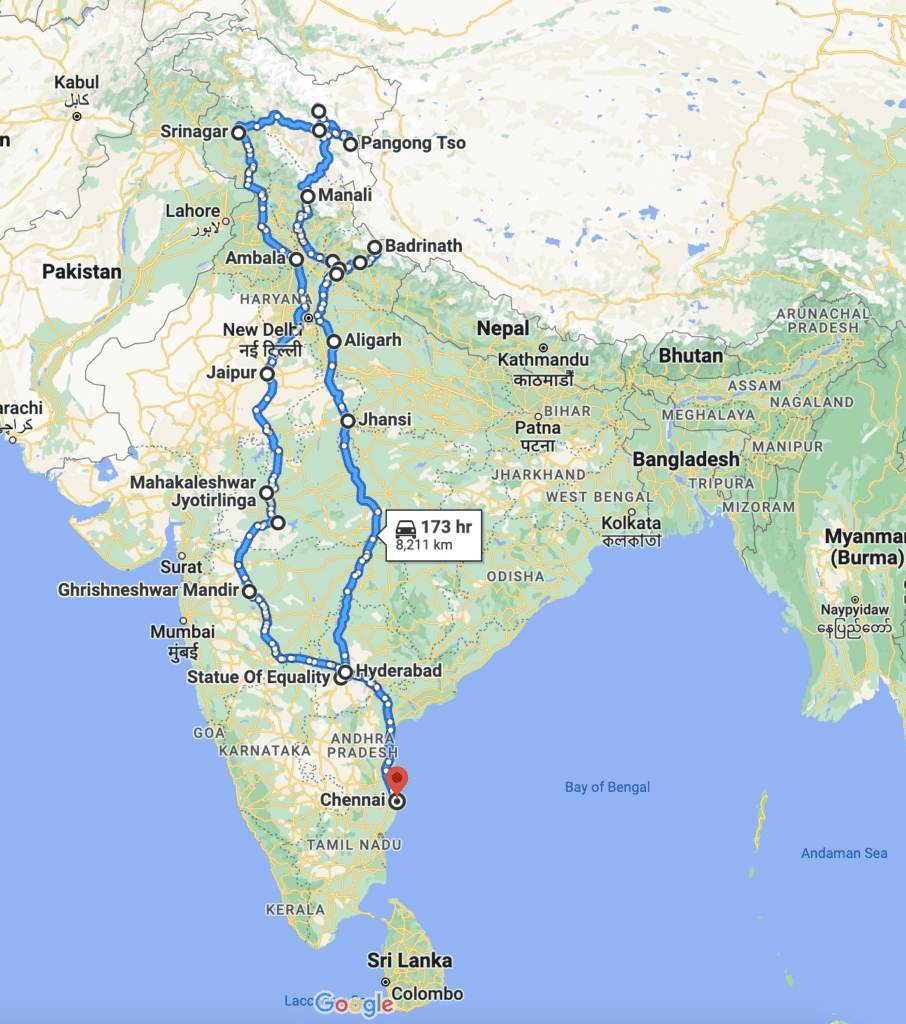 We started from Chennai and reached Hyderabad where we visited the “Statue of Equality“, a statue dedicated to 11th-century vaishnavaite Saint Ramanujacharya. From there we traveled to Aurangabad where we had darshan of Mahadev at “Ghrishneshwar Jyotirlinga” Temple which is among the 12 Jytorlinga temples in Bharat. At the same place we visited Ellora Caves which is also a UNESCO world heritage site. Here, Kailasa temple is one of the main attraction for domestic and international tourists.

The Kailasa temple is dedicated to Bhagwan Shiva who is also known as the God of Gods(Mahadev). It is said that it took 200 years for this temple to be constructed but it is a mystery that how this temple was constructed and which all tools were used for it. The temple is carved from top to bottom which becomes nearly impossible for even modern machines to think like this. There are so many mysteries about this temple that it will take another blog and I will write about it later. 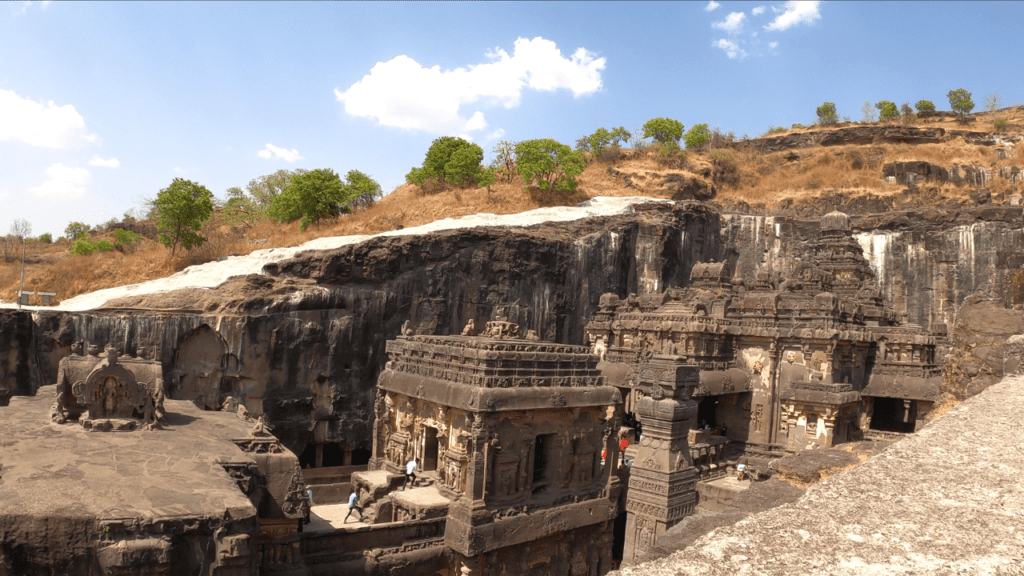 After this, it was just the amazing roads we had to cover till we reach Ladakh but we made sure that wherever possible we will try to enjoy our journey. We reached Jaipur which is also called as Pink City. Here we treated ourselves to the Rajasthani delicacy “Onion Kachori”, Kulfi at Ramchandra Kulfi Bhandar (Badi Chopad), and some shopping for Rajasthani-style dresses. 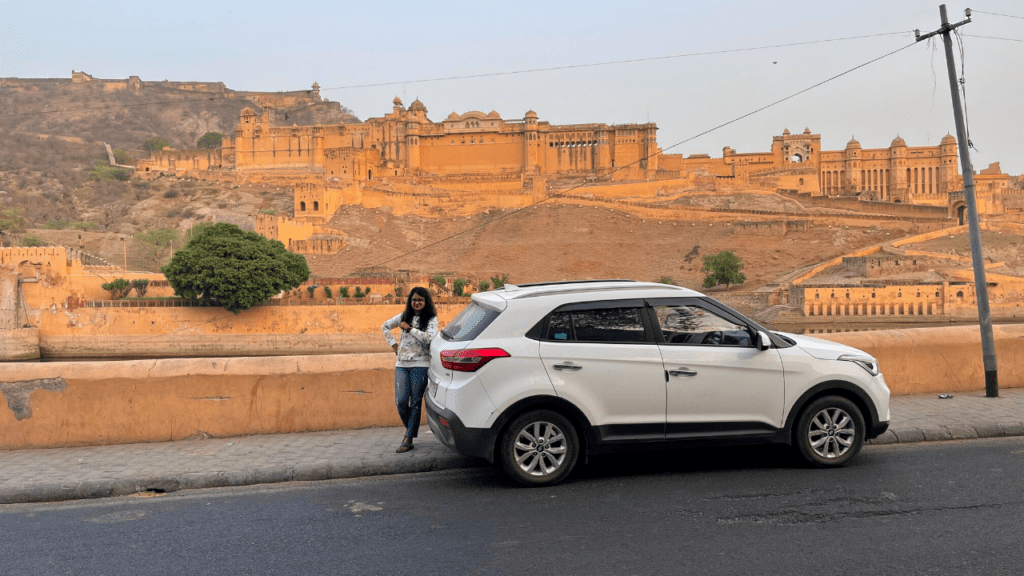 While you are shopping in Rajasthan, it will very difficult for you to choose dresses. You will be tempted to buy everything since everything is so beautiful and full of different colors. You can check our Jaipur shopping video here.

There are two routes to reach Leh-Ladakh by road:
Since we were not 100% sure that the Leh-Manali highway will be open for cars by the time we reach there and Srinagar- Leh was already open so we decided to take Srinagar- Leh highway to reach Leh and while returning back we will take the Leh-Manali highways which is known for its high passes and beautiful landscapes. 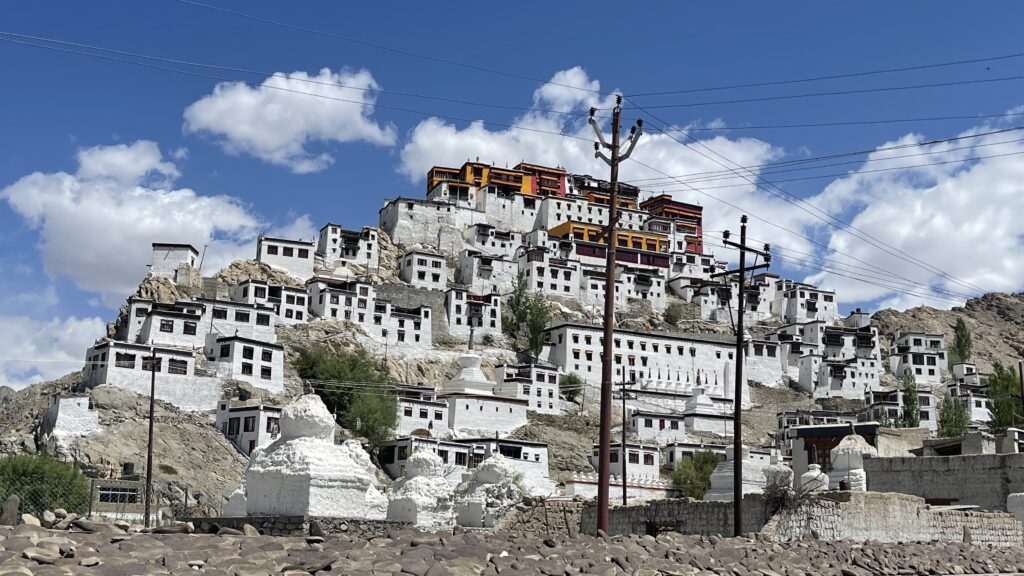 
We started from Jaipur to Ambala and from Ambala, we reached Srinagar in 1 day covering a lot of bad roads. Once we entered Kashmir Valley, the views changed completely. We were welcomed with snow-covered Himalayas mountains, green fields, etc. The temperature was also dropped to around 19-20 ° degrees while when we started it was 38° Celcius.

We stayed for the night in Srinagar and visited Adi Shankaracharya Temple, Dal Lake and Shalimar Bagh Garden. On the same day, we started for Sonmarg from where tourists will travel to Leh. The traffic on Srinagar – Leh highway is controlled through an odd-even way, one-day traffic movement will be from Srinagar to Leh and another day it will be from Leh to Srinagar.

We were fortunate that we got permission to travel the Srinagar – Leh highway on an even day since it was less traffic but were asked not to travel at night. By 8:30 PM we reached Drass which is in Ladakh. We were finally in Ladakh after waiting for 6 months.

Places to Visit in Leh-Ladakh
It was a lifetime opportunity to travel to Leh-Ladakh and we covered an 8500+ KM distance from Chennai – Srinagar – Ladakh – Manali – Chennai and it gave us countless memories.
There are many places that are still left in Ladakh to be covered and we will visit Ladakh again sometime in near future by the Zanskar route and road trips won’t stop since travel is like oxygen for us.
Do support us!
You must log in or register to reply here.
Share:
Facebook Twitter Reddit Pinterest WhatsApp Email
Top