It's been a tradition lately to end the year with a hill drive, almost always in search of snow and though never been lucky to get snowfall around that time but the same has given some nice trips so far. This year I had applied for leaves for entire week even when there was no plan where to go. Had a small office trip to Dhanaulti in start of Nov'18 and the wave of snowfall on 13th Dec'19 closed in for an Uttrakhand trip.

Had shortlisted Mukteshwar, Chopta for the plan but all of sudden protests and riots across came as shocker for the entire plan. Bookings were already done. Could have cancelled if it would have escalated but news from Uttrakhand side was reassuring for situation and finally had to take call over guts.

This would be one of the drive where rather than being elated, we were tense for entire route till the moment we hit Uttrakhand border. The schedule reflects the same, steady 65kmph avg and distance covered in 4.5hrs. 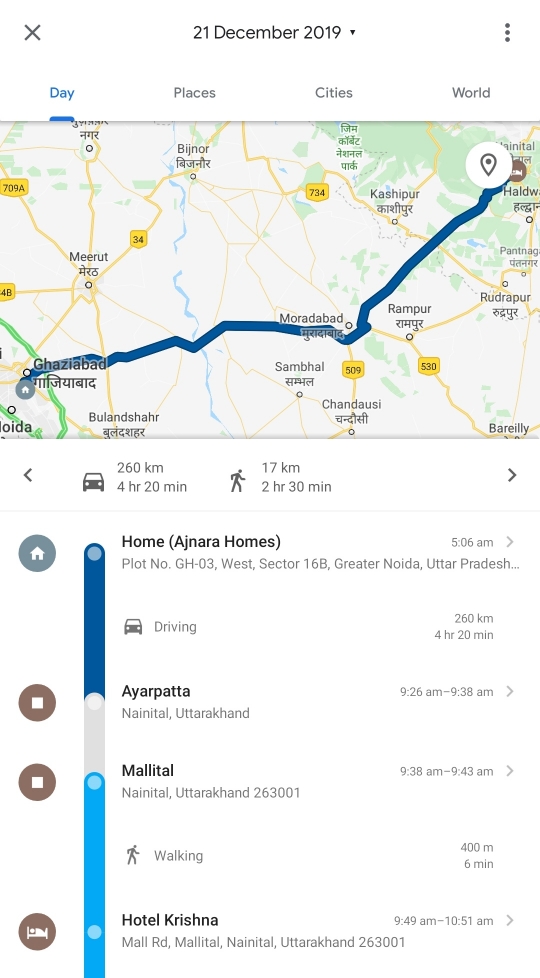 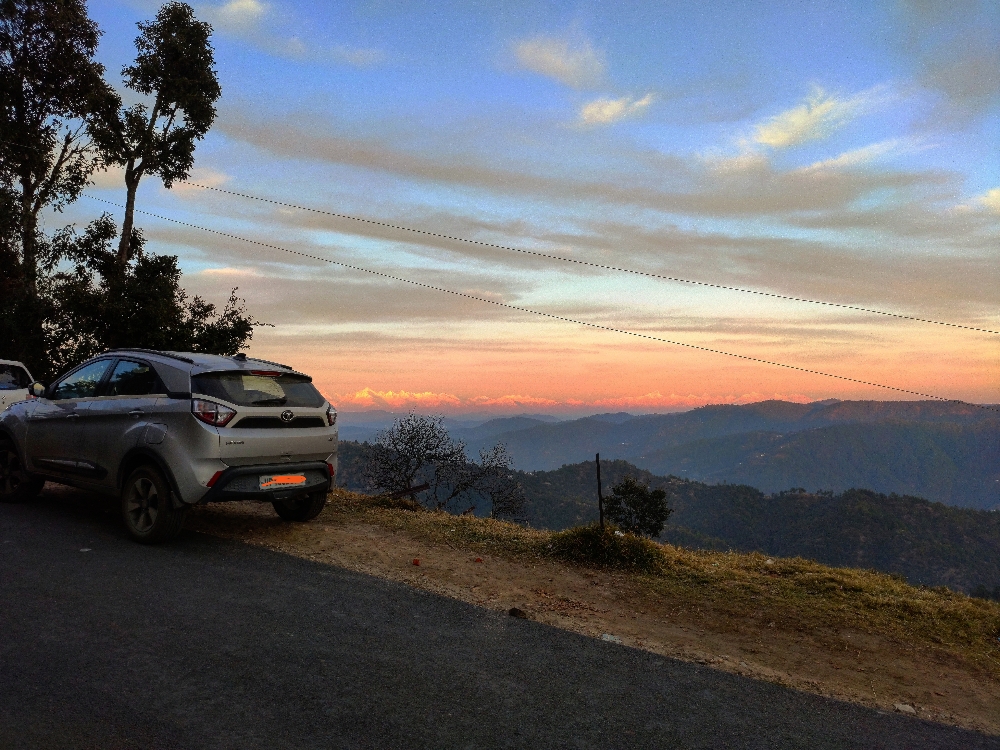 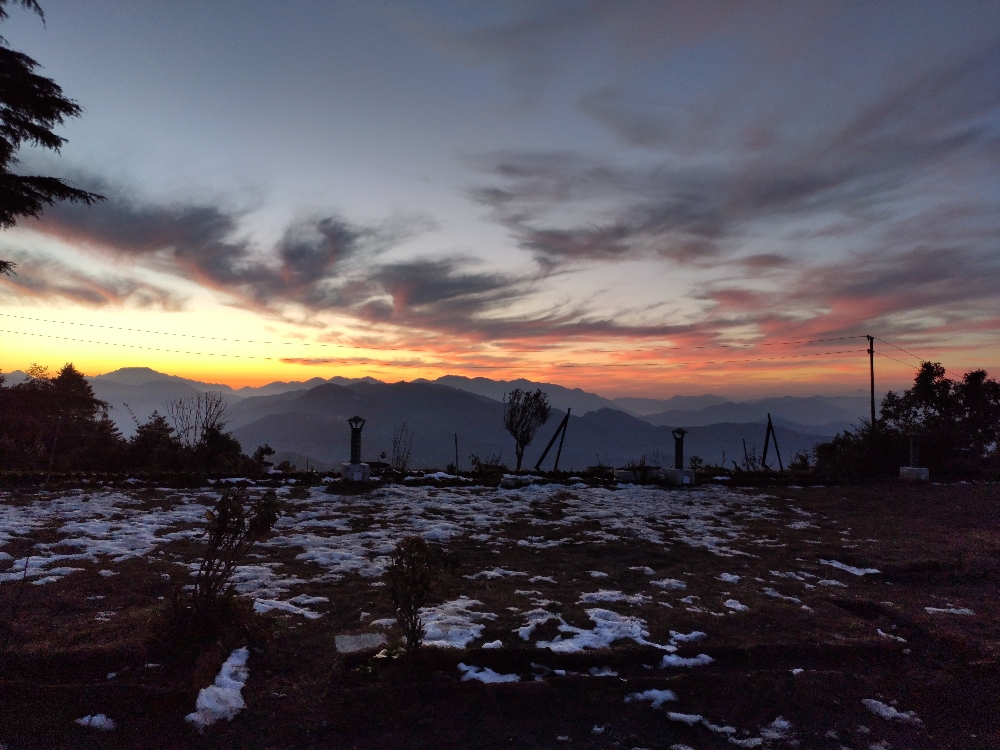 
When you asked me about going at this time. I was sure, you are not going anywhere.
But you took the risk.
This is your Good Luck !
I am sure there will be almost nil traffic. Only some local traffic may be there.


When you asked me about going at this time. I was sure, you are not going anywhere.
But you took the risk.
This is your Good Luck !
I am sure there will be almost nil traffic. Only some local traffic may be there.
Click to expand...

Nainital was worse hit and disappointment and anger in local shops was visible during discussions. For them, peak season is finished for this year.

Mukteshwar rather seen good crowd as entire parking place was full even though not sure that many stayed as most of them returned back by day.

Returned back today. Started in dark and covered the distance till Nainital almost in dark, which slowed me down a little. Rather than staying in Mukteshwar itself, I should have chosen to stay in Bheemtal for the last day but anyway...

Back home by 11.30 AM along with a break of 15mins for tea and another break in local market for milk veg etc 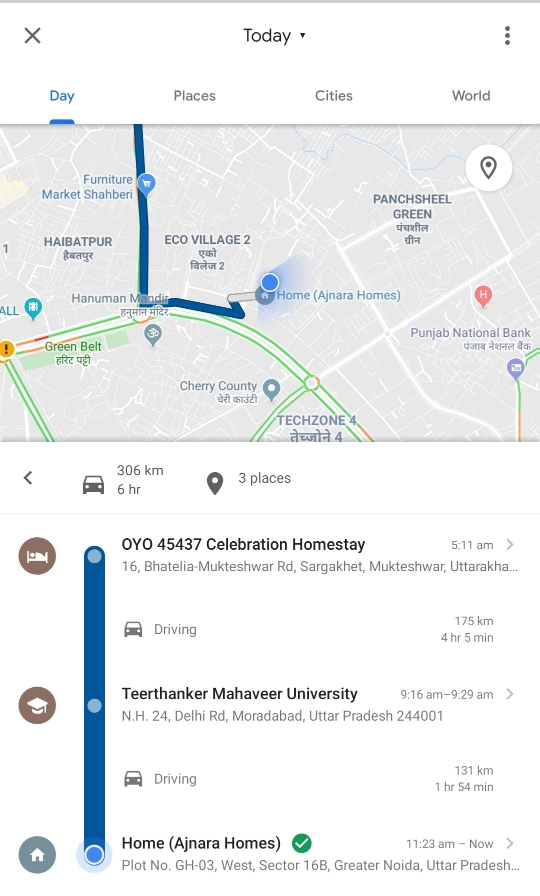 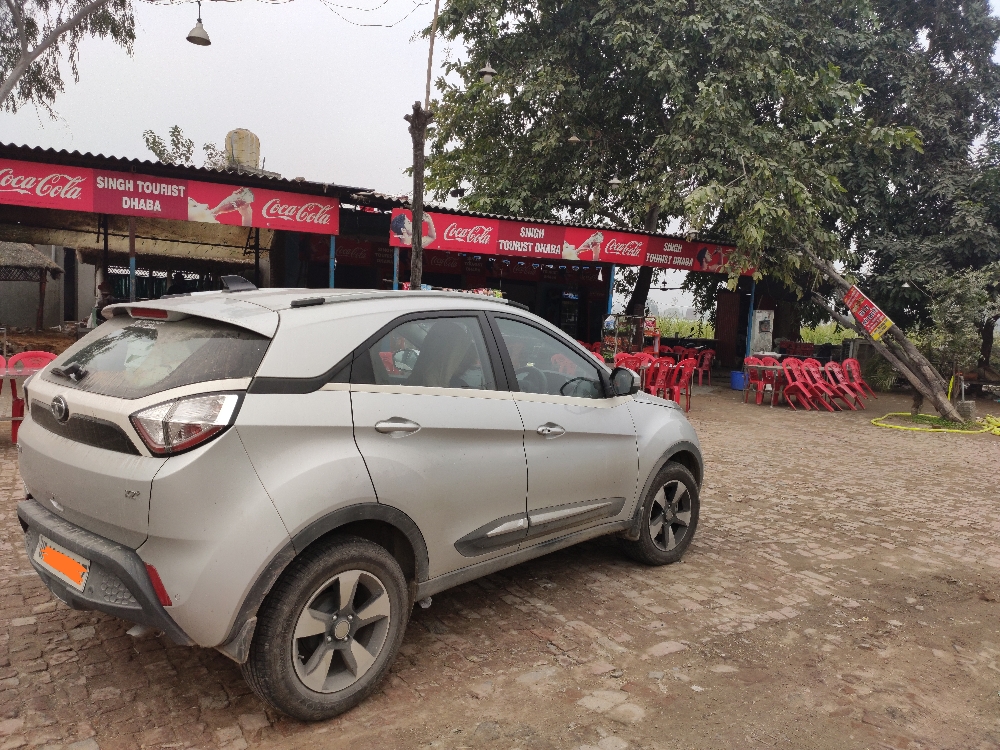 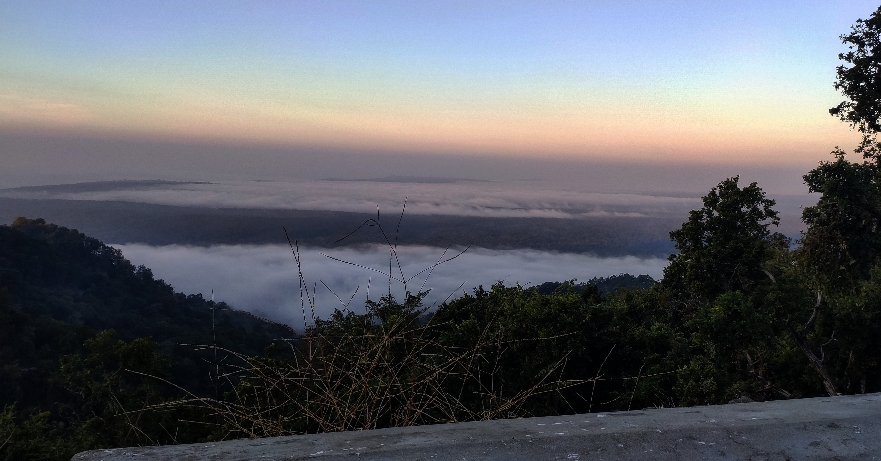 Would continue the story in evening ....

Start of the drive

Just a day before I came from office in a worse fog, where vehicles weren't visible even from 5-10mtr distance and that was something which was worrying me. The elephant in the room was still the riot condition in certain part of UP. Hapur and Rampur areas were told to be sensitive though I had inputs from Uttrakhand side being normal. We decided to cross Hapur bypass early in the morning and then hit the roads without any break till the time we don't enter UK.

Pushing it more early than 5AM wasn't suitable either so that was decided to be the time to start. There was nothing significant about the route, it remained dark for the half the route and by 8AM, we would have reached around Kaladhungi. Yeah I might have been driving at pace but it was contributed by no breaks of any kind whatsoever and all 3 Tolls have perfectly working FastTag lanes, which virtually didn't took even 10 sec extra. In last trips, usually they kept FastTag lane blocked and one needed to honk once for someone to open the lane manually. Hopefully this would be the new normal post Jan'20. 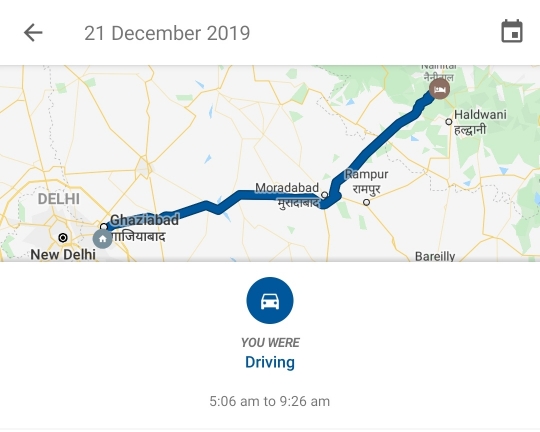 I was surprised myself when we reached Nainital by 9.20 AM. It was even better than what I targeted for. Our booking was in Hotel Krishna, which was at Mall Road so before entering into Nainital, I took a stop and made a call first to check if there would be any parking available (I wasn't expecting one but what harm in trying

). The answer was in negative, which would mean that we would need to park it in Public parking and to drag the heavy luggage to hotel.

In the walk, overheard the bullshit by someone that "New law has came which would mean that whoever can not prove his father documents, would lose voter id, AADHAAR and all properties. Would be deported and if resisted then would be shot dead." I could understand that why the riots are happening and what kind of poison being filled in mind of some by desperate politicians looking for their relevance back. But why don't people bother to even read things. I thought we are getting better in Post JIO era when information available for double verification even in villages (have been pleasantly surprised on that part many a times). I confront people sometimes when come across such bullshit, but nowadays its scary to even reason with people who believe on such bullshit. Pointless to even try.

Anyway felt sad about common people suffering due to this. Hard earned holiday season gone, tourism gone and God bless those who caught up in middle for nonsense controversy about non-existent law. 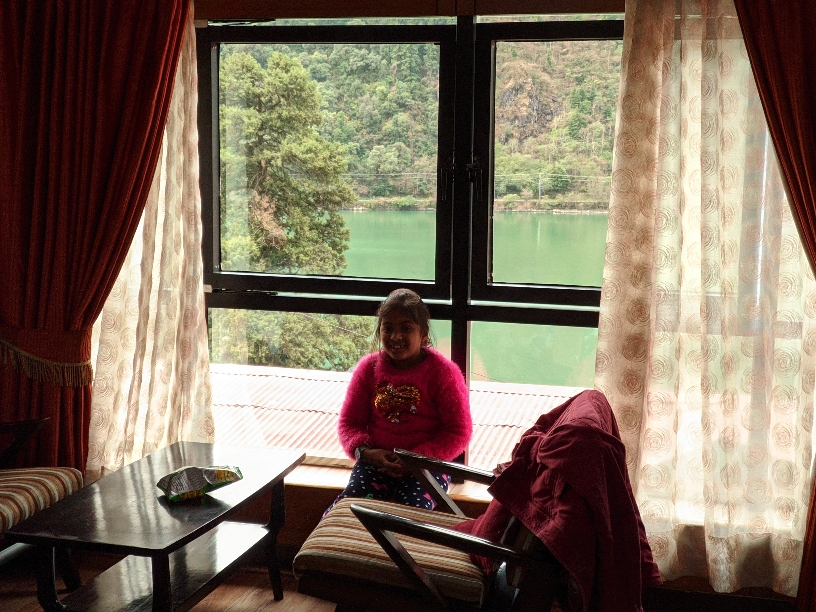 Parking car and then walking took around 20-30 mins and then a staff came from hotel to pick up our luggage. The hotel was costly but the view from the windows came out pretty good. I was tired a little from the driving so we took our sweet time to get settled in. Ordered tea and stretched our legs. The light clouds in sky were giving me hopes to see snowfall in Mukteshwar till then. 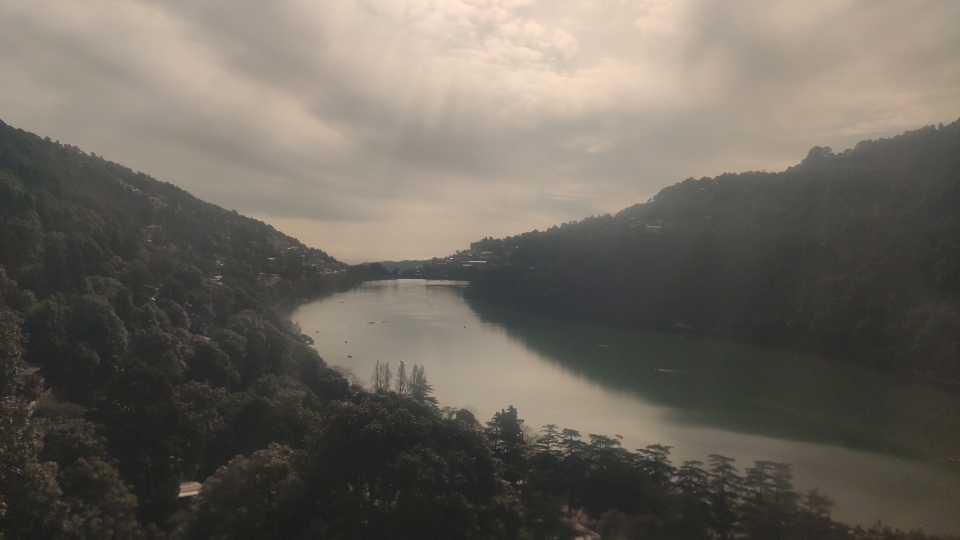 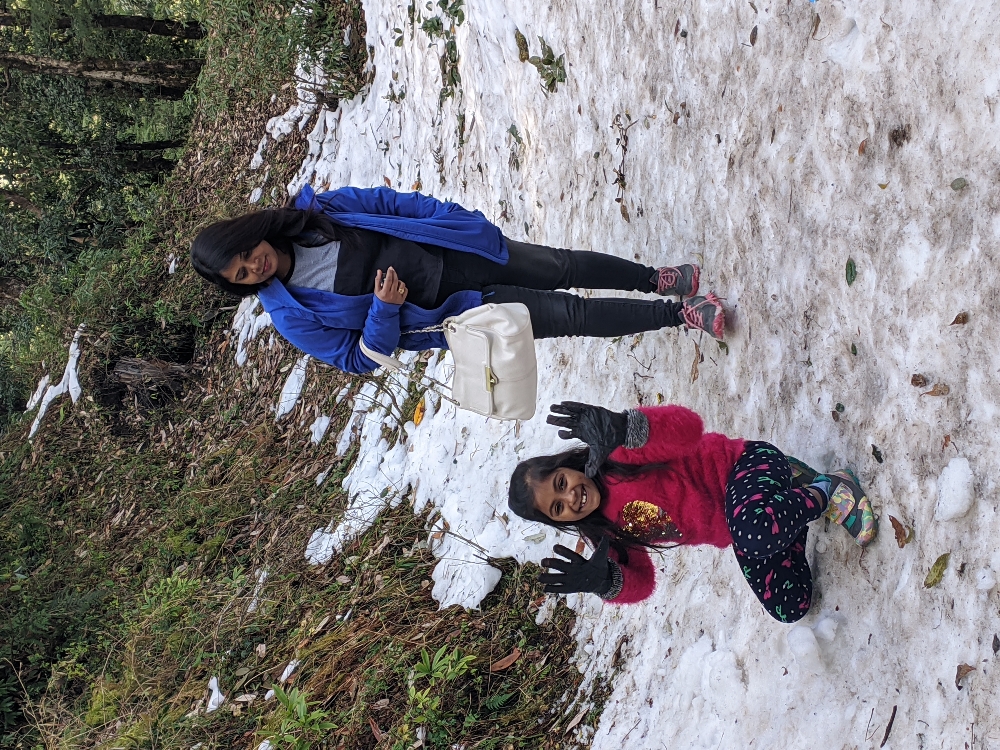 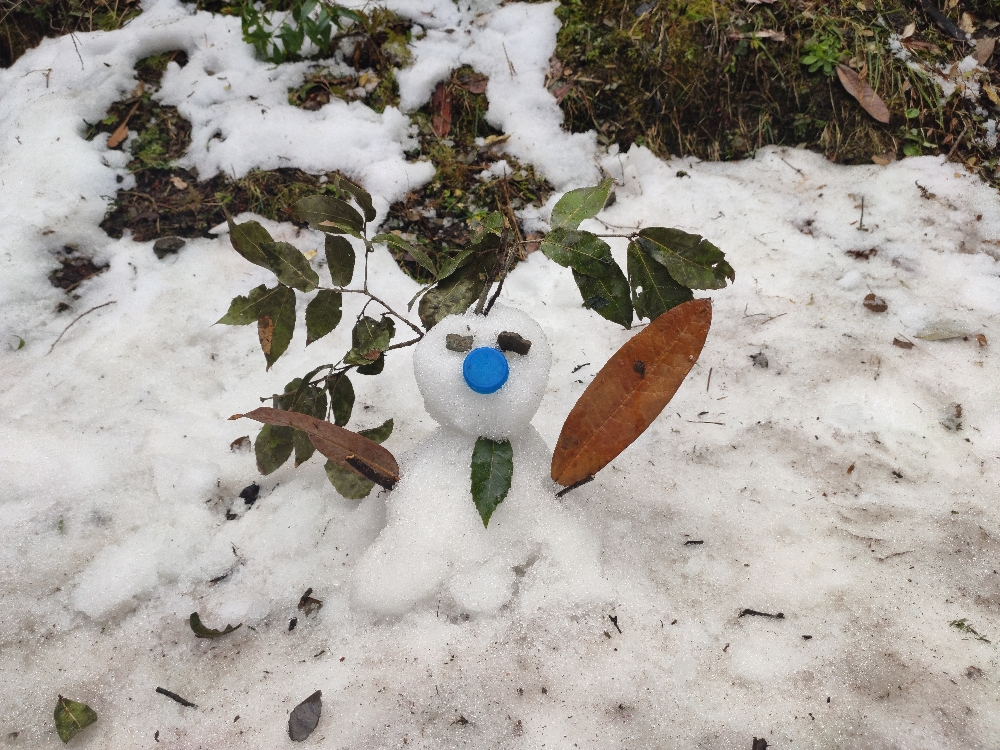 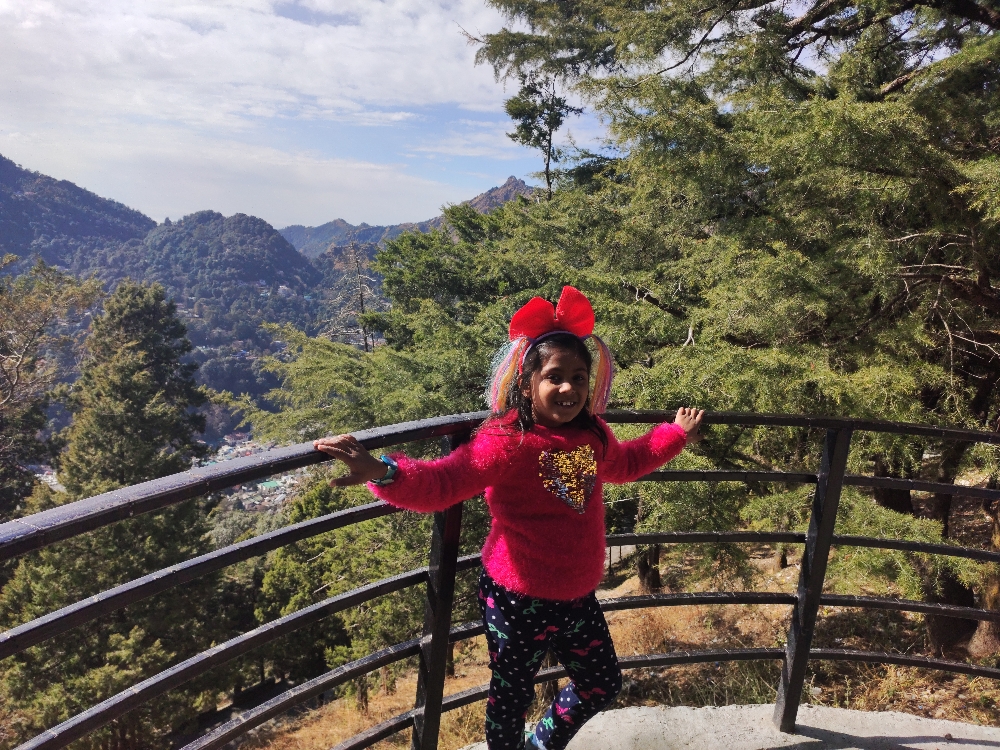 After an hour, we headed towards Ropeway and by 11.15 AM, we would have on Ropeway. Kiddo was sad by not seeing any snow around but snow view point cheered her finally. The snow wasn't fresh but for kiddo, snow was snow and enough to make the snowman she was looking forward to make since a while. As that would have been most part for the Nainital stay, we let kiddo enjoy till the time, she wished and we headed back by 12.40 PM. 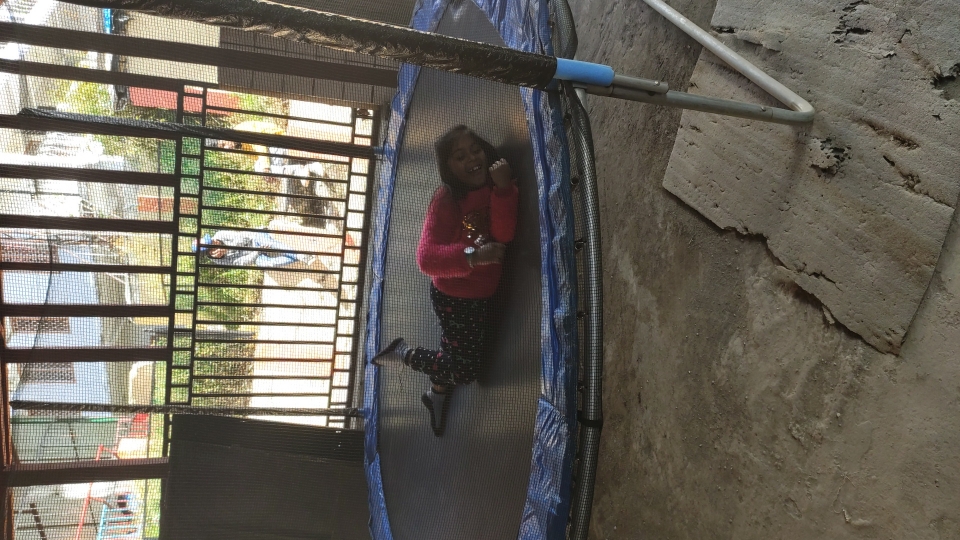 After the lunch, we headed for boat ride. The town was kind of deserted from tourists otherwise even getting a boat takes time. The nice guy on boat was disappointed the way entire season has been destroyed this time otherwise with a middle in week Christmas, they were expecting to have a blast this year earning wise. We wandered around till 3.30 PM and then were back to the hotel. The signature fog which we been familiar with in Nainital was missing this time. 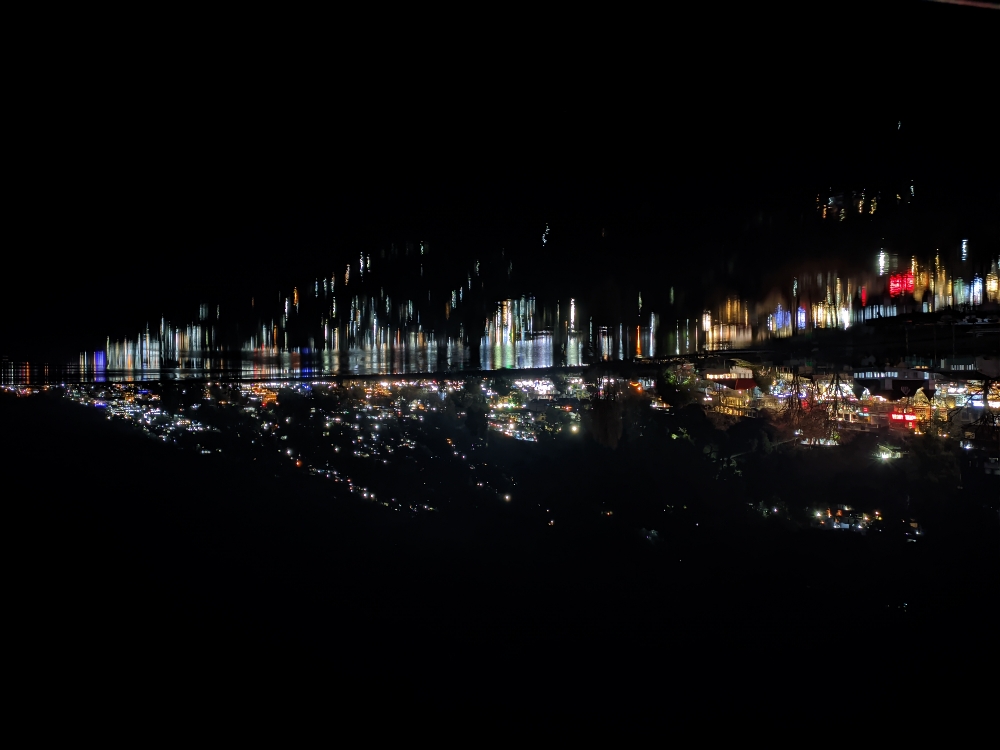 A quick sleep and then we were back on mall road for a nice walk by 7.30 PM. Unlike past visits, this time even though it was cold but those chilly winds weren't there. We didn't much to do and came back to hotel for dinner. Informed the reception that we would be leaving early morning tomorrow by 6AM so bills need to be cleared in advance.

The night was chilly for sure but the way sky had cleared up, we didn't had any hopes of snowfall anymore, not even in Mukteshwar. but still hopes are hopes..

What was the type of room where you stayed at Hotel Krishna? The lake view is good.

What was the type of room where you stayed at Hotel Krishna? The lake view is good.
Click to expand...

This was Executive room. Cost me 2800 something

Second day of Trip
The first day was usual Nainital and nothing exciting so all the hopes were with Mukteshwar. Weather had already changed so there was no chances for the fresh snow. We been hoping that being on height, may be some snow.

We planned to cover Bhalugaad waterfalls and Chaul Ki Jaili apart from staying in TRH and watch the sunrise and sunset from the PWD Rest-house which has now taken over by TRH itself and they are offering that in 6800/- in name of Royal Suite. 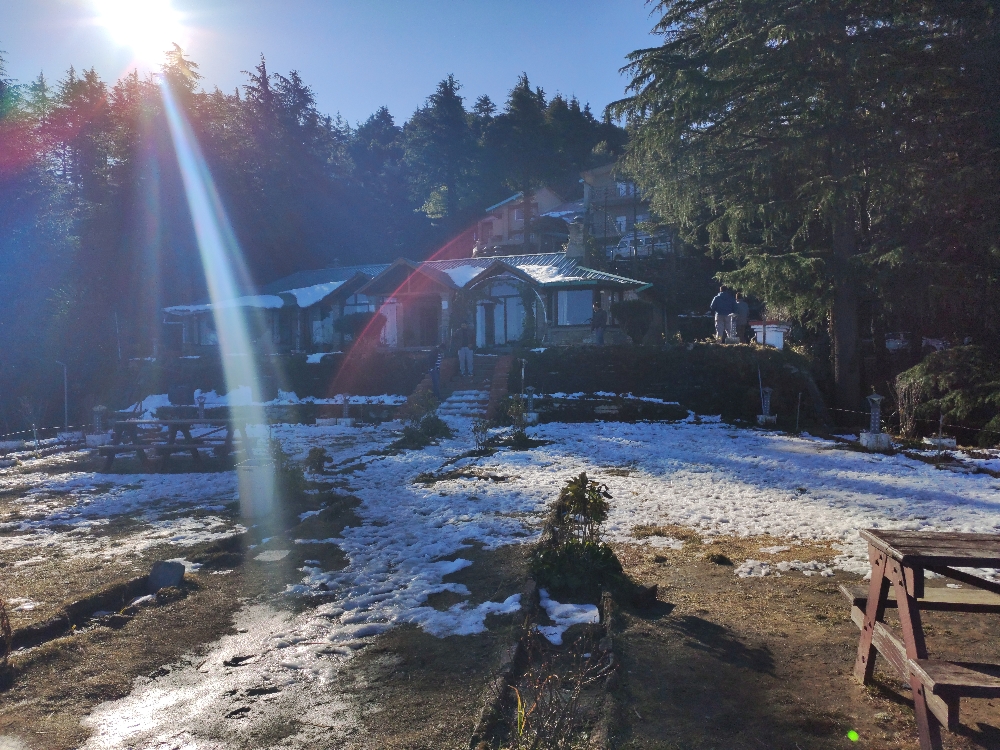 I chosen Bhalugaad and Mukteshwar on route, idea was to stop by Bhalugaad first and then go to TRH but in the middle we changed the idea and thought to reach TRH first and get settled first as Chopta plan was dropped anyway and I was thinking to stay in Mukteshwar itself for two days.

The plan faced first hiccups when I reached to car. The car windows were iced. 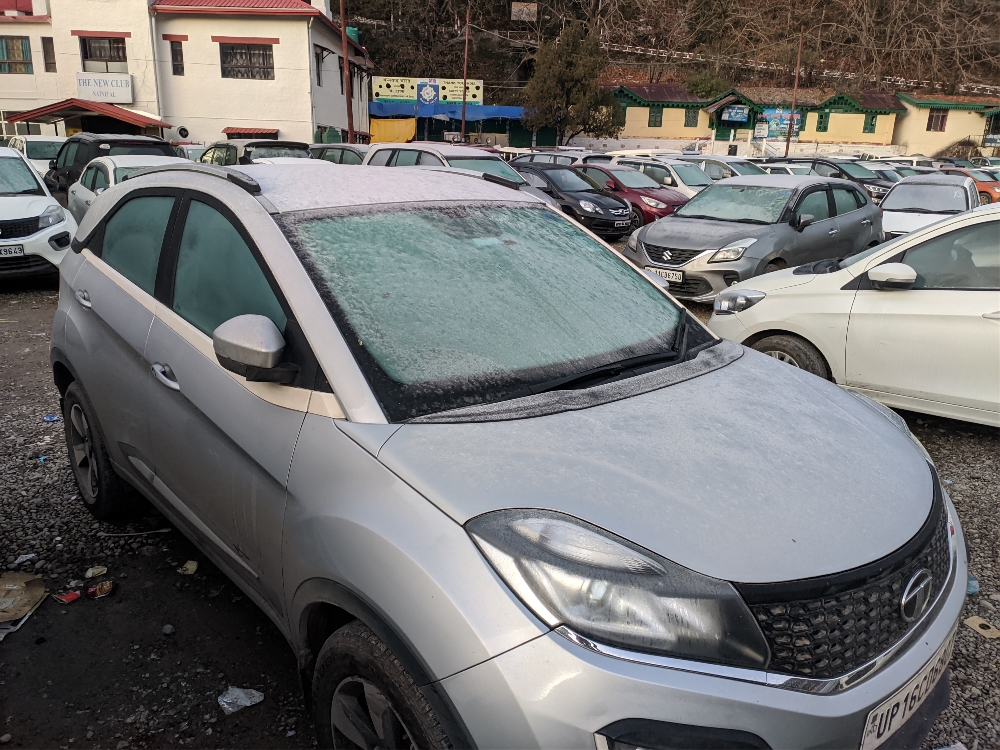 Not only that but the car was not starting due to cold. It took good 15 mins but with help of water bottles in car and a few attempts to start the car and we were finally on the way to Mukteshwar by 6.50 AM.

We reached TRH Mukteshwar by 9.13 AM though the room wasn't available by then. We had to pass time so we parked the car and moved to Old PWD rest house in front of TRH which has been taken over by TRH.

Kiddo got busy in playing with snow but even though it looks good in pictures, it was hardened and not really the soft kind suitable for kids play. Yet kiddo finds her way.

By 11AM, we finally checked in and rather then settling, we just kept the luggage and then came out to drive towards Bhalugaad waterfalls.

We got some good mountain view along the way. 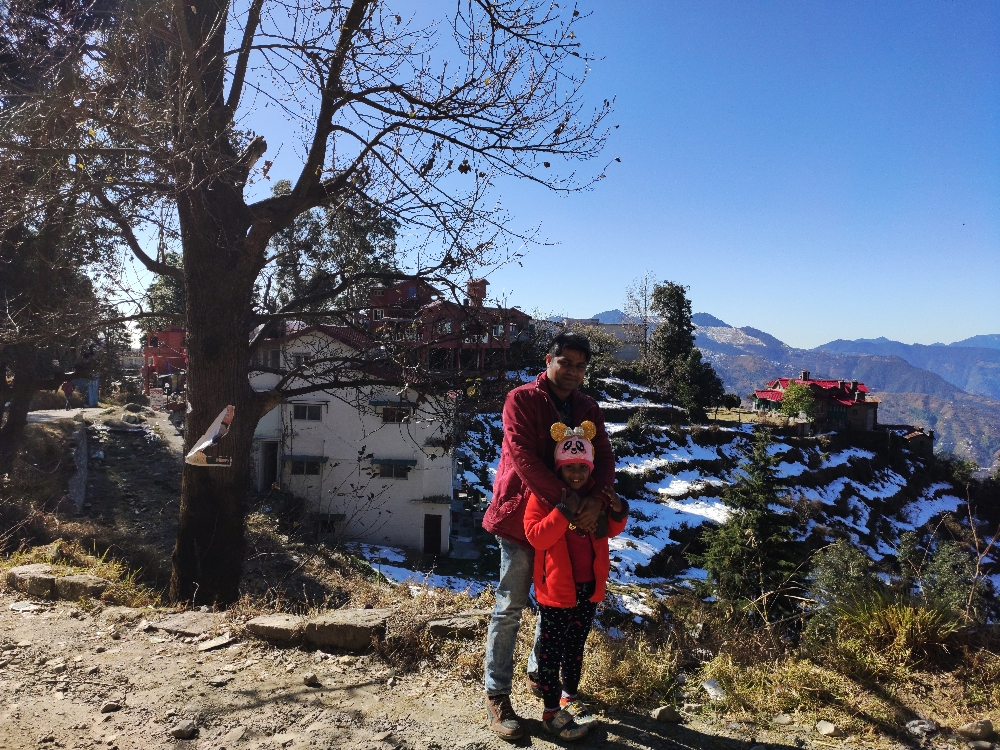 Bhalugaad waterfalls was just 10-15 kms but it took more than 35mins and we started our *forest walk* by 12PM and within 30 mins, we were at the falls. The trek would be called as simple and easy not even moderate. I have a video of us coming back from the waterfall to road within same 30 mins, which I would upload later. 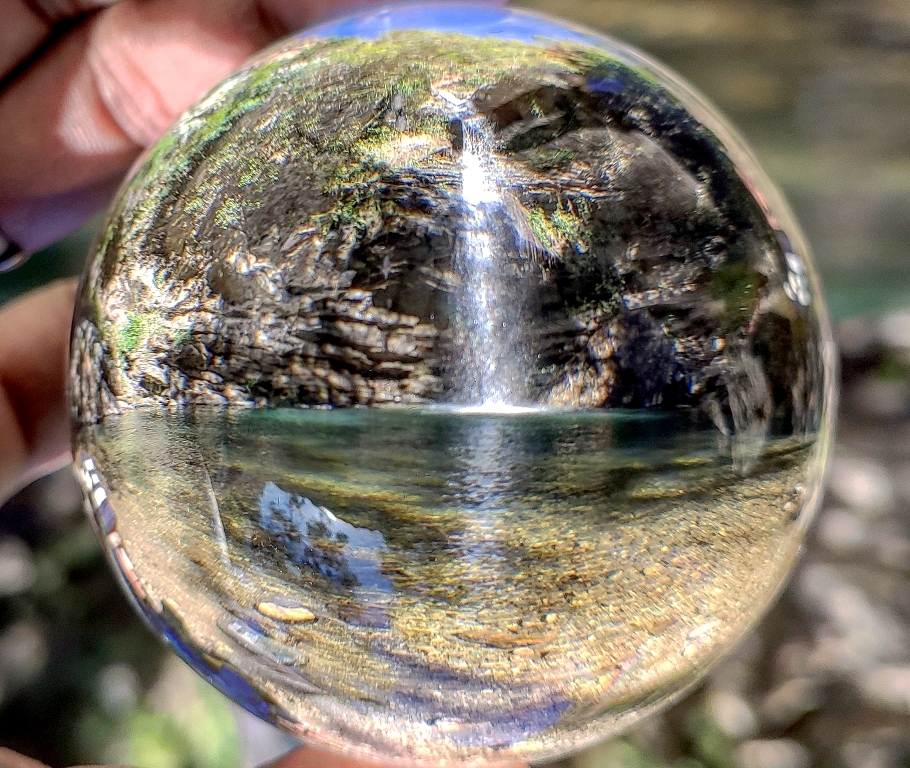 Did you notice the rainbow forming in the waterfalls?