I wish to post my favourite two photographs of my Linea in full size. 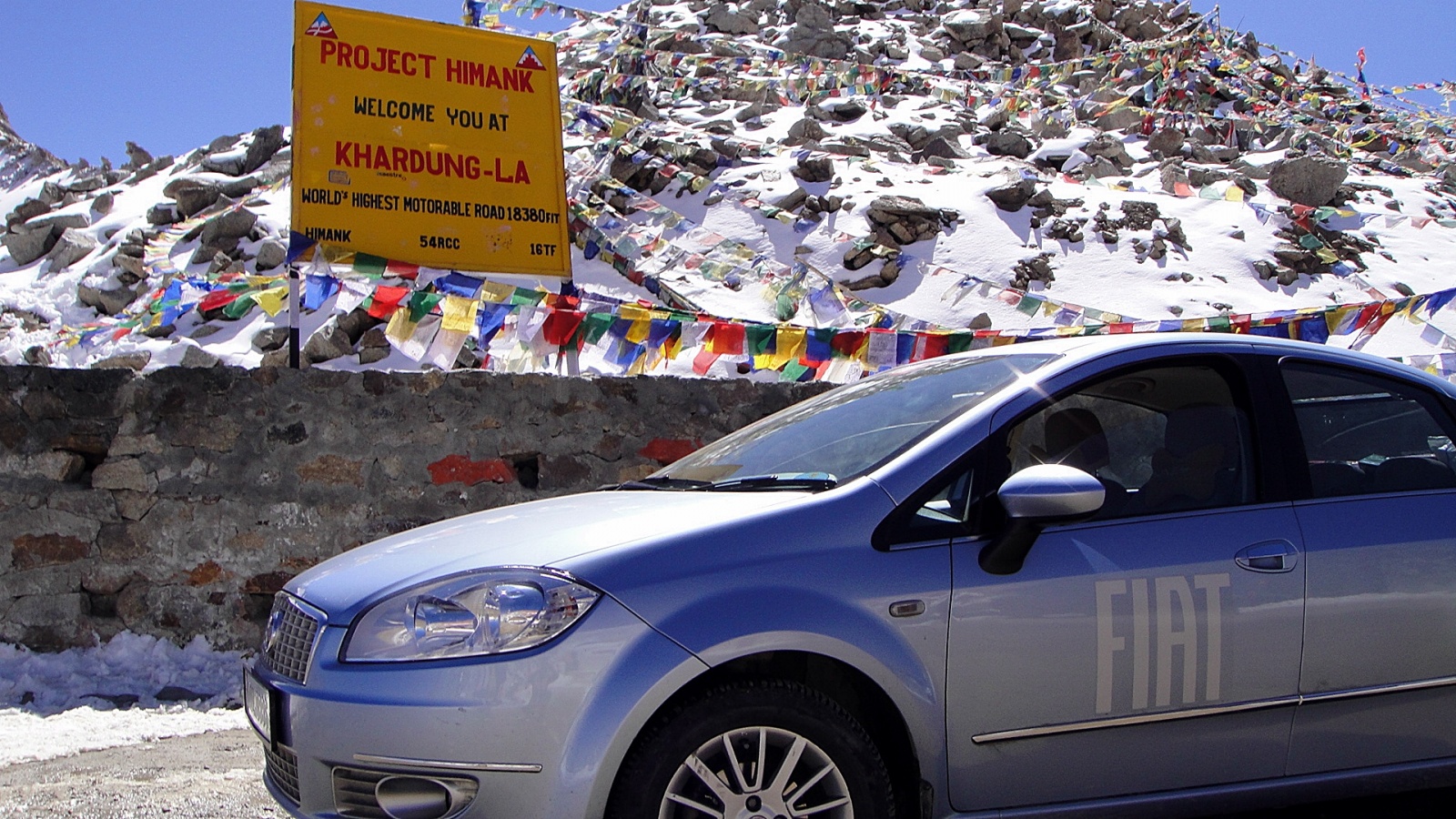 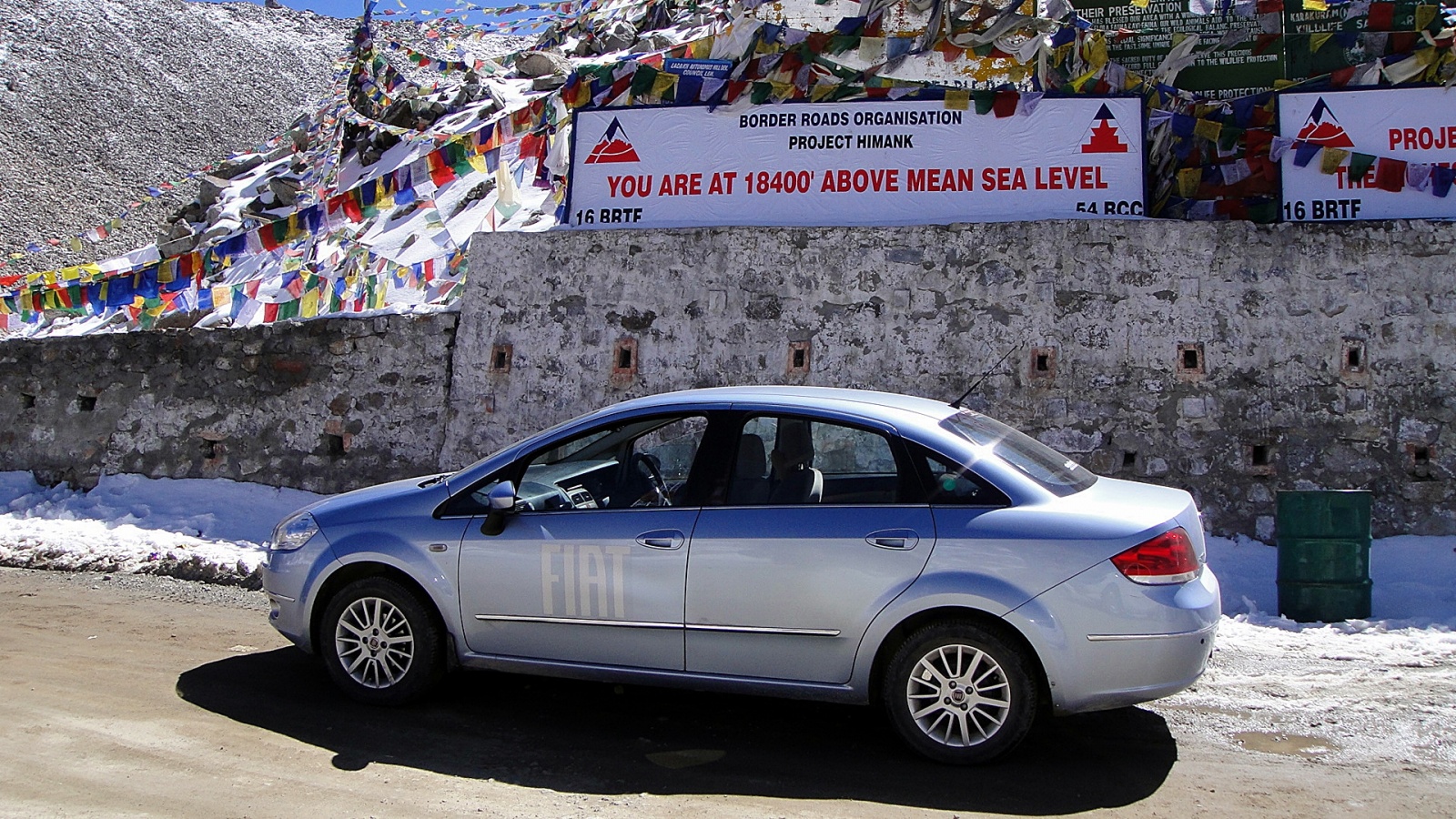 Again Awesome Sir.Glued to your T-LOGS for the past two days.Hope my boss is not in this forum...

One more of your TLOG yet to complete.

Re: Srinagar to Chandigarh

nicely narrated story sir. . .btw you should have gone for the traditional thali in HAVELI to feel the true pleasure oh haveli. . . .btw good going. .eagerly waiting to hear more trips from you

Re: Srinagar to Chandigarh

Thanks a lot once again, rkbalaji.


Navdeep Kashyap said:
you should have gone for the traditional thali in HAVELI to feel the true pleasure oh haveli
Click to expand...

Thank you so much for the suggestion and compliments, Navdeep Kashyap. I will try the traditional thali in this September.

Ladakh: maiden visit for my XUV 500 - aka Purple Cheetah, shortly, P Cheetah - and second for us. While my erstwhile Linea could visit within 2 years of purchase, P Cheetah could do it only after 3½ years. 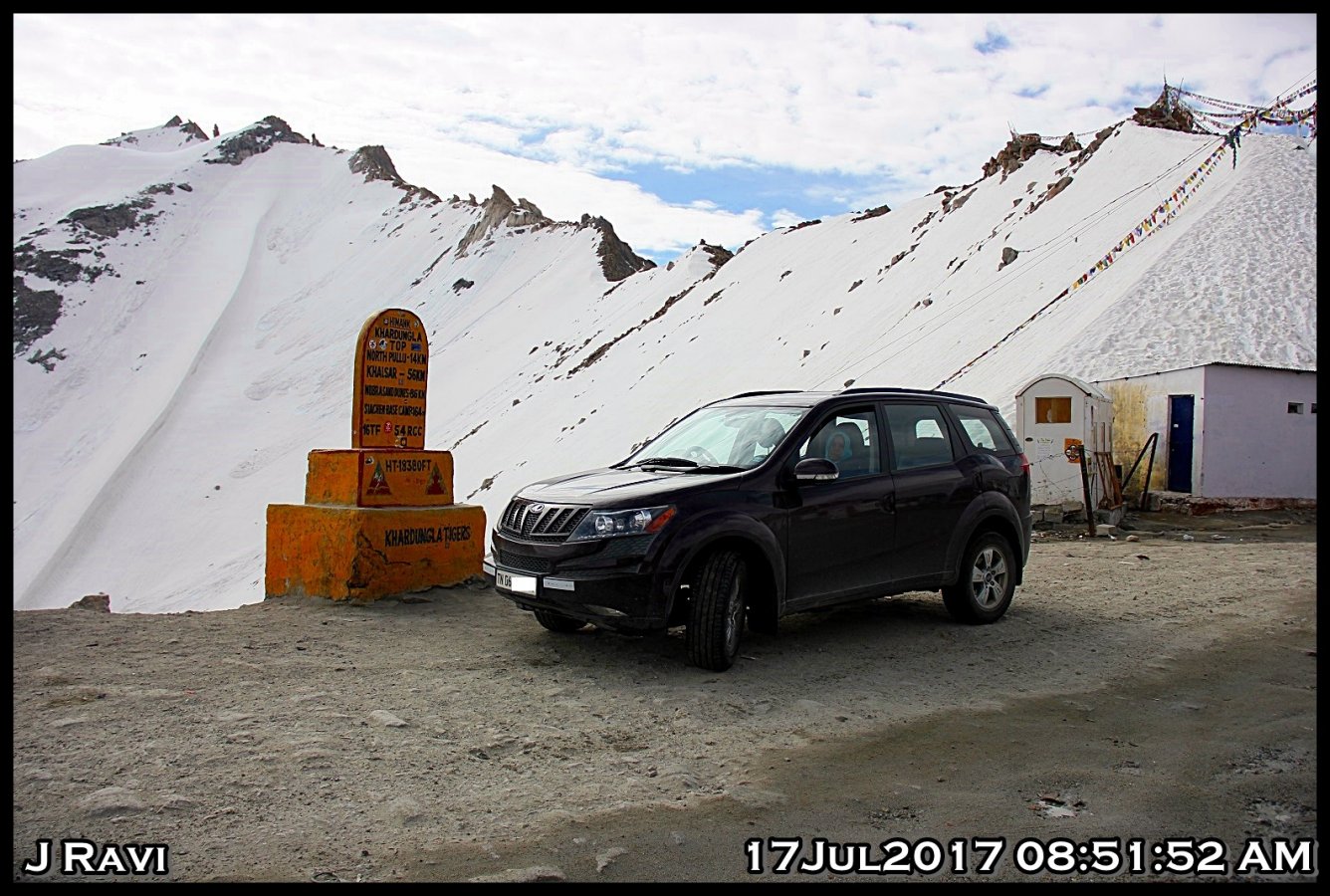 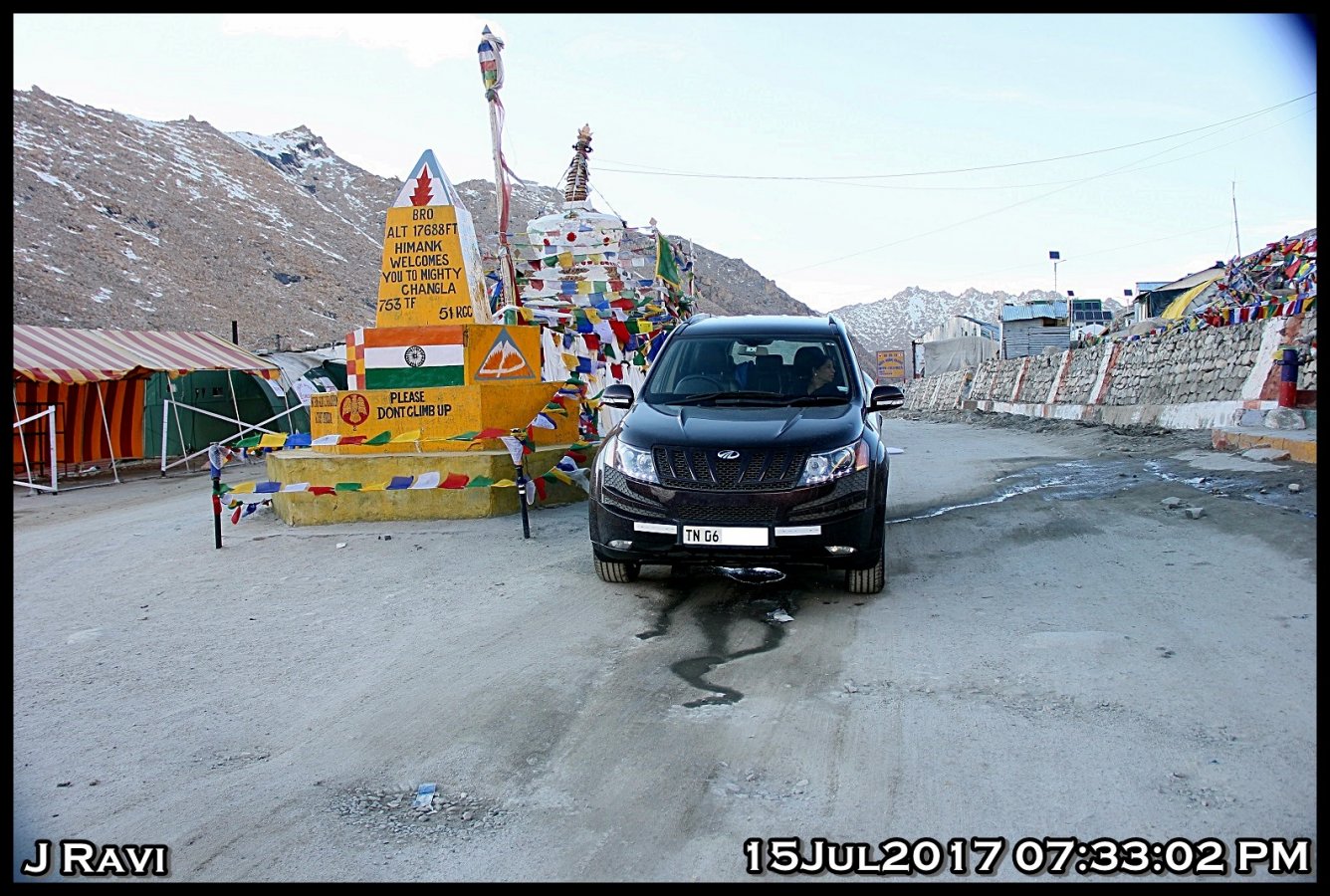 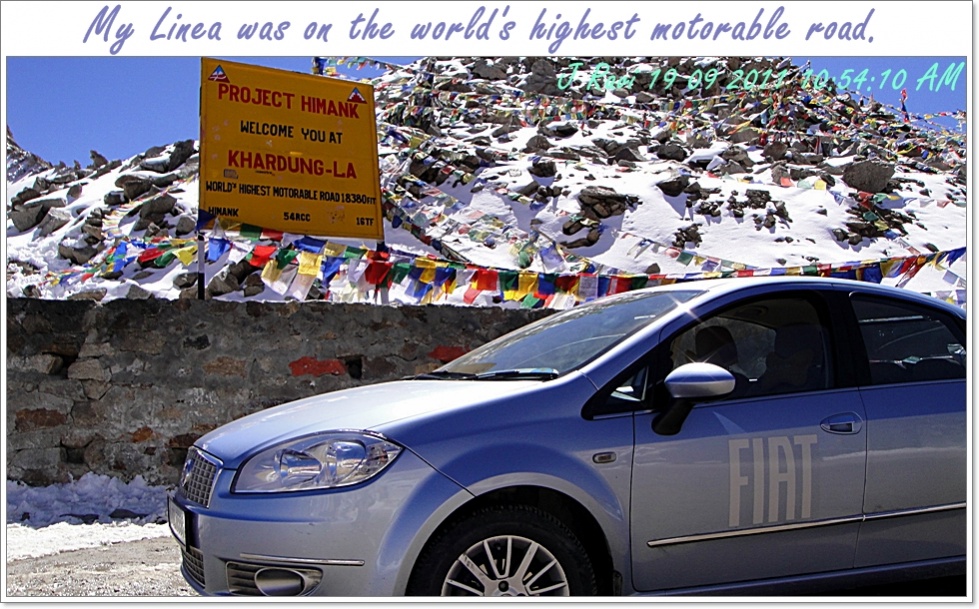 I have driven/ridden to many states/UT of India on my XUV 500, Thunderbird 500 and erstwhile Linea, but no police force ever treated me and my wife the way J&K Police did on 18 July 2017 [Tuesday] afternoon at Sonamarg Kangan check-post.

We left our Leh home-stay at 4:15 am on that day and reached Sonamarg at 2 pm, where we had our lunch. After lunch, we were to drive to Srinagar, where we were supposed to halt for that night. But, J&K Police decided otherwise. At Sonamarg Kangan check-post, we were stopped at 2:45 am and told that we could proceed to Srinagar only by the next day morning as they had orders not to allow any ‘tourists’ between 1 pm and 4 am as the situation at Srinagar was ‘bad’. However, J&K Police allowed the ‘locals’ to pass through! My Aadhaar card, which entitles me for many benefits and concessions, was useless in front of J&K Police! As a last resort, I played the senior citizen card and requested them to allow us, the senior citizens. Any other government department would have fallen for that request, but not the stubborn J&K Police. One arrogant police officer commented that they won’t allow even Amarnath pilgrims and medical emergency cases! There were more than 50 people including women, children, who got stranded at the check-post by this ridiculous order of J&K Police. An arrogant police officer shouted at the crowd to stay at a hotel and come by the next day morning. Some called their known sources in J&K Police, had them called the check-post personnel and they were let to go. Some were allowed to go after some grilling. I called the police control room and explained the situation. The person listened to me carefully, agreed with me on almost everything, but finally told that I had to pass through only by the next day morning as per the orders. 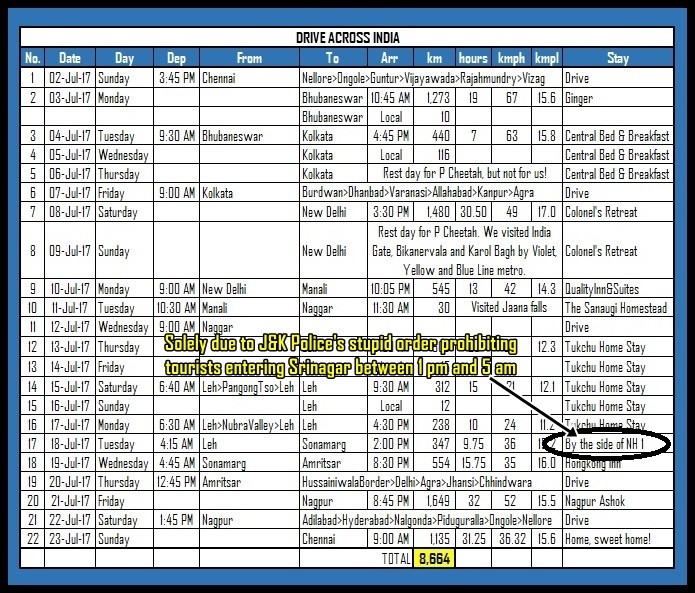 One gentleman-police officer, who was conversant in English, confided with me that entire Kashmir Valley was peaceful since a few days, but they did not have any other option other than obeying the higher-up’s order. Another police officer invoked the name of Union Home Minister for this order, prohibiting the entry of ‘tourists’ to Srinagar from Sonamarg! If any ‘tourist’ was harmed, he would lose his job! Bullshit.

By evening, the inspector of Sonamarg police station visited the check-post and the affected people, including me, requested him to allow the tourists to proceed to Srinagar. He discussed the matter with someone on his mobile, but finally shouted at the check-post personnel not to allow any tourists until the next day morning and left the place.

I decided to stay put in my XUV 500, parked near the check-post. We skipped our dinner too as we were not in mood to eat. A friendly dhaba-owner came to me, requested me to park XUV 500 within his dhaba and informed me that all the vehicles would be cleared by 10 pm. In the meanwhile, I called the host of home-stay in Srinagar, which I had booked, explained the situation and cancelled my booking. He expressed sorry for what happened and informed me that the ‘situation’ at Srinagar was quiet and peaceful since a few days. In fact, he was shopping at a mall in Srinagar at that time! According to him, the real controlling authority wanted to harass the tourists in such a way that they would stop coming to J&K, which would directly hit its economy.

Late in the night, there was a change of check-post personnel as the new set of police officers arrived relieving the previous set of officers. I watched all these happenings from my XUV 500, while half-sleeping. Around 11 pm, one policeman came to me and enquired, when I uttered the words written in the first paragraph. I sternly told him that I would never visit J&K in future, come what may. While the conversation took place, the friendly dhaba-owner too joined the party and supported me. Both profusely pleaded sorry for what had happened. The policeman said that I could proceed immediately and requested me to tell the name of a nearby hotel, if asked for details at the next check-posts. I told him that I won’t lie and would wait for the dawn of the next day and proceed directly to Amritsar, where I had booked for the next day.

With the mental agony caused by the stupid J&K Police, I typed most of this report on my laptop, while sitting inside my XUV 500 by the side of NH 1 at Sonamarg as I could not sleep that night.

The next day, I promptly started XUV 500 and drove to the check-post at 4:01 am, only to be told that I had to wait upto 5 am! I got wild and told that police officer that he would be creating an artificial traffic jam in a few minutes. True to my words, more than 15 vehicles arrived one-by-one, resulting in a traffic jam on that narrow road. Without knowing what to do, that police officer allowed us to pass through the check-post at 4:45 am!

On 23 July 2017 [Sunday] morning, I entered Chennai and drove directly to Woodlands Enterprises, RK Salai, where my XUV 500 had tankful of diesel, and I, a complimentary copy of The New Sunday Express. After coming home, I was going through the newspaper and I was immensely happy to know that the J&K Police personnel at the Sonamarg check-post got beaten up by none other than our own army personnel on Friday night for not allowing them to pass through! I remembered the proverb in Tamil and Kannada: the one, who eats salt, will have to drink water! The Karma theory acted immediately in full swing. 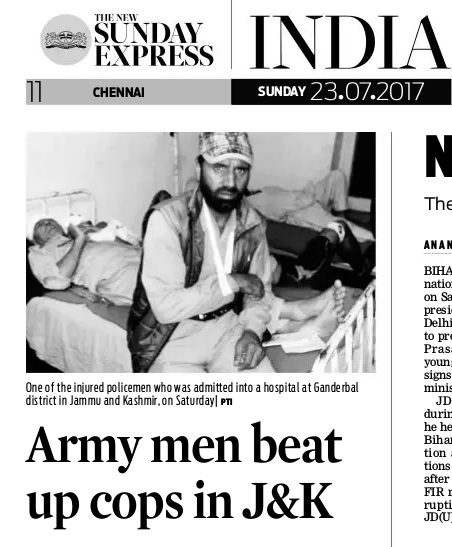 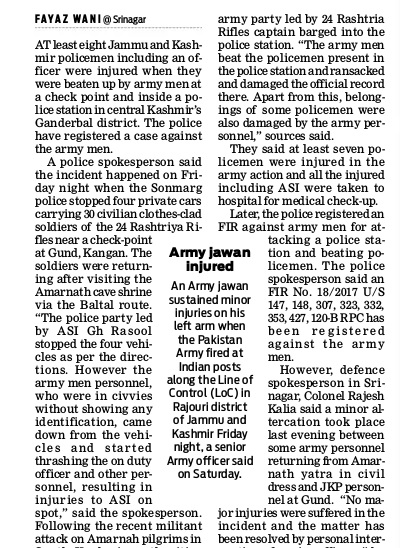 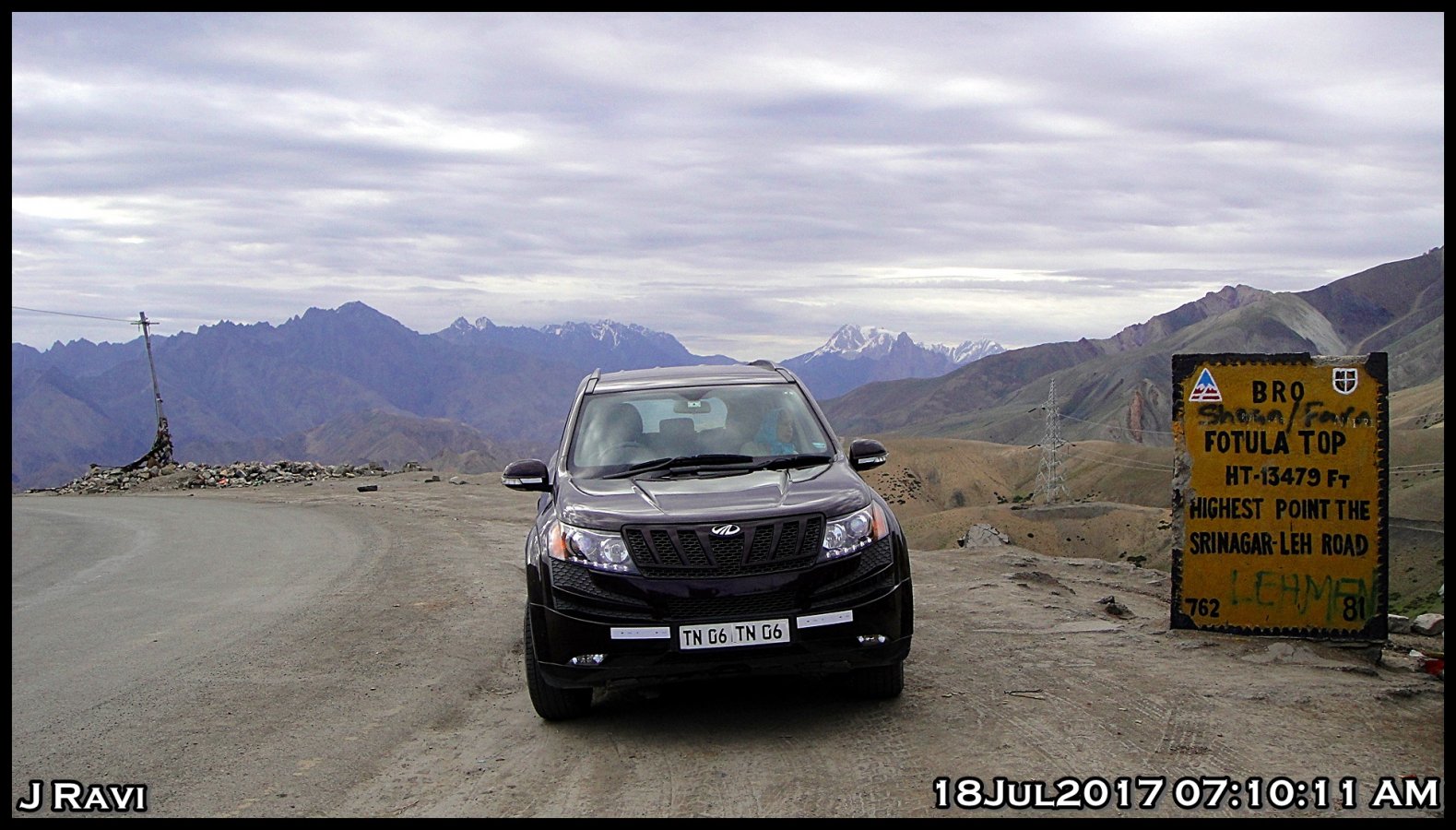 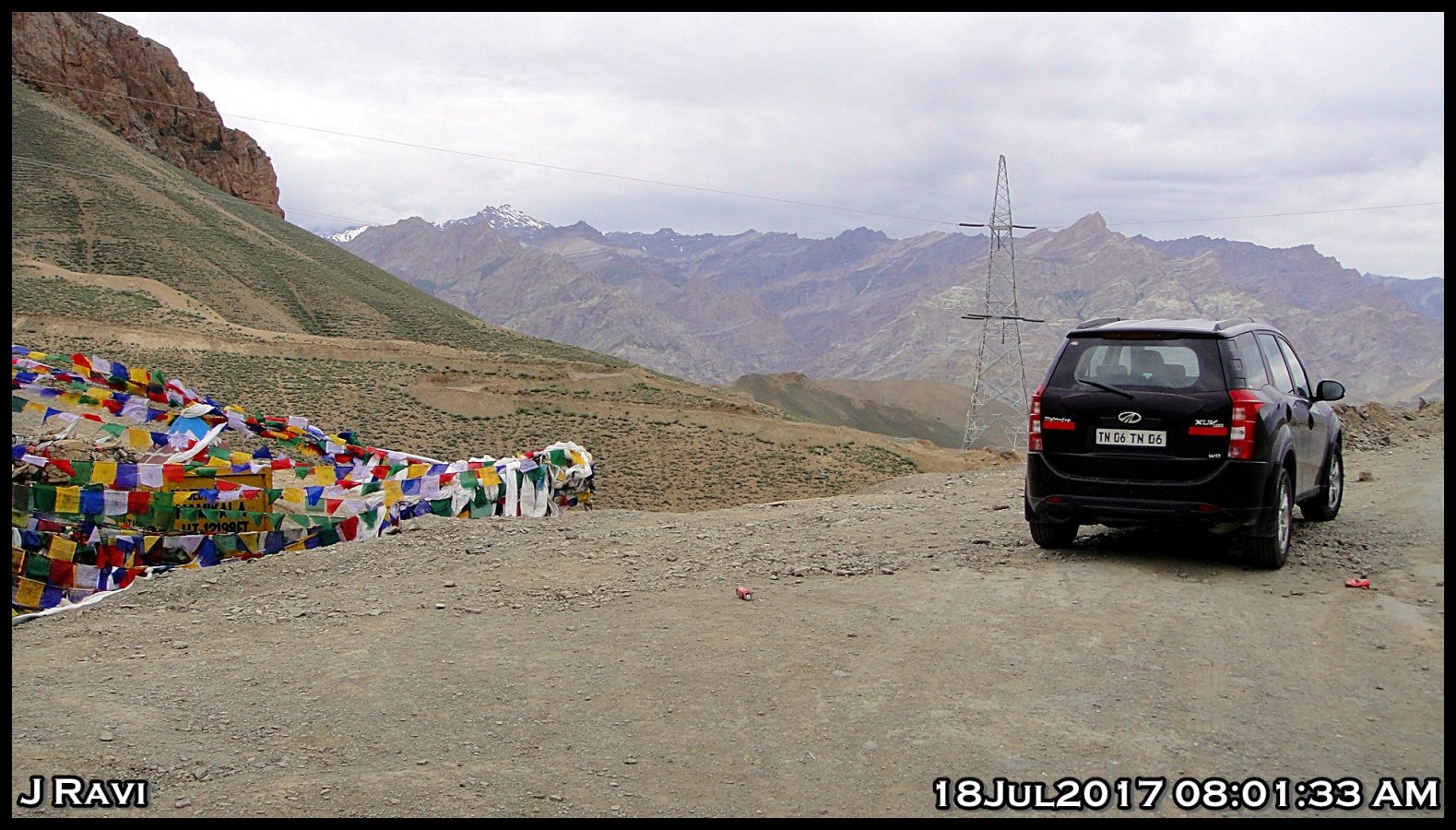 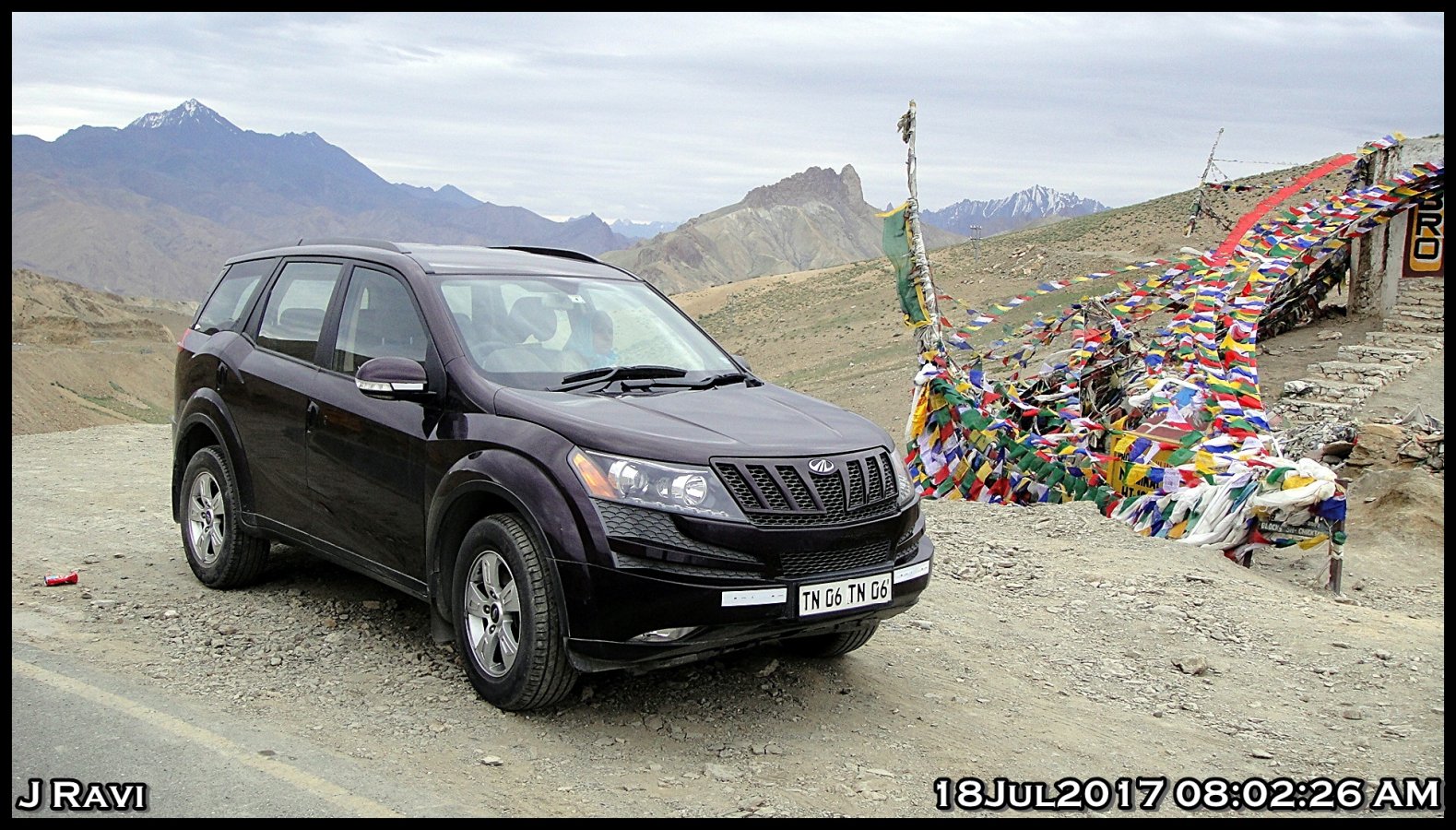 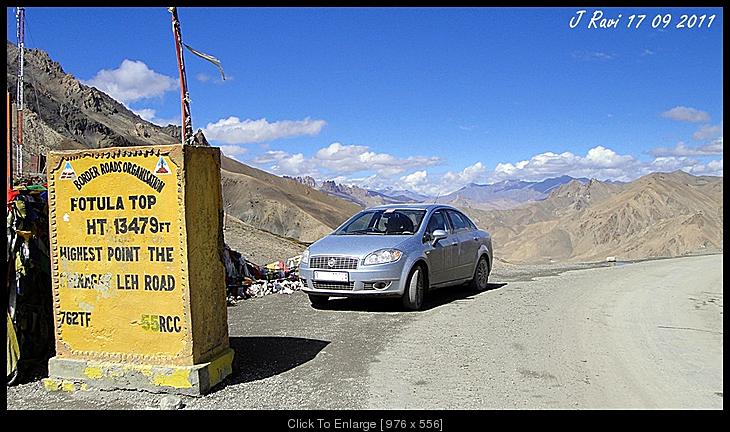 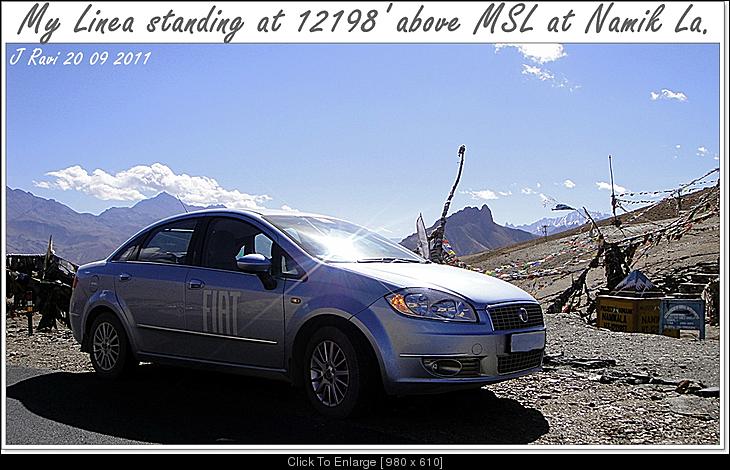 It's time for some numbers.

I had so many plans starting from Plan A to Plan F due to situation at J&K, bad roads via Manali, Sach Pass bad roads, etc. Finally chose Plan F via Manali and made the hotel/home-stay bookings well in advance. 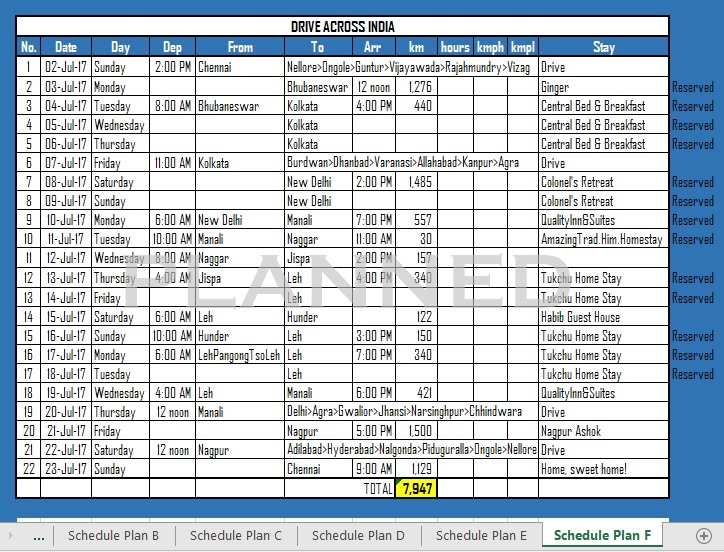 But, as the situation was normal in J&K, I came down via Srinagar, which was a new Plan G! 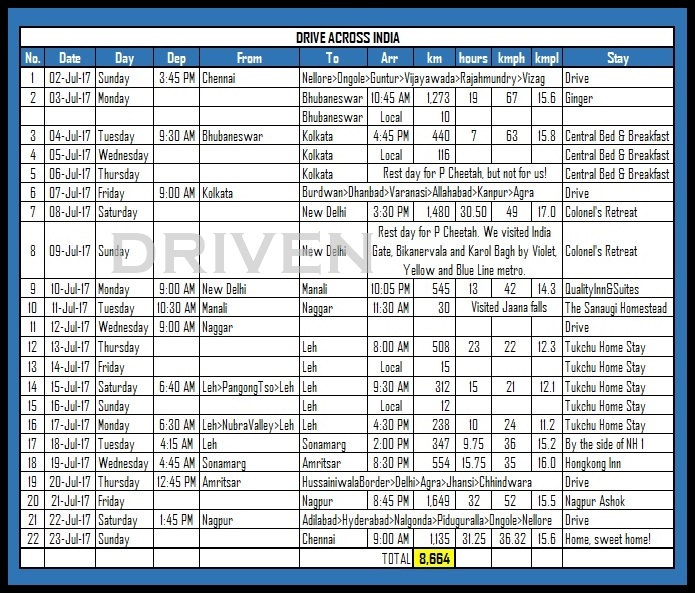 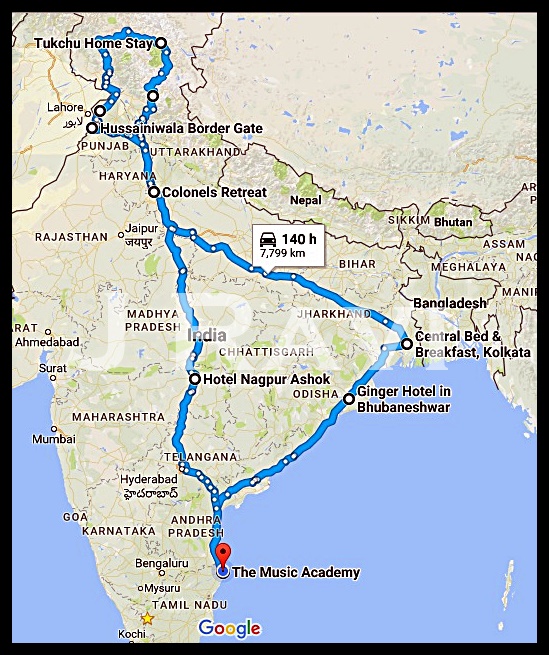 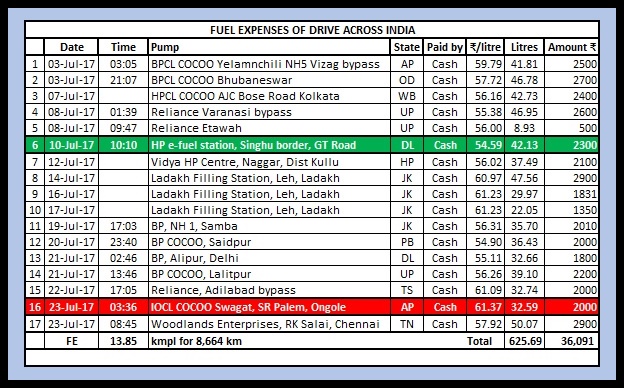 I paid most of the tolls throuogh FASTag. However, there were a few toll plazas, where I paid by cash, the notable one being Yamuna Expressway [₹ 415 x 2]. 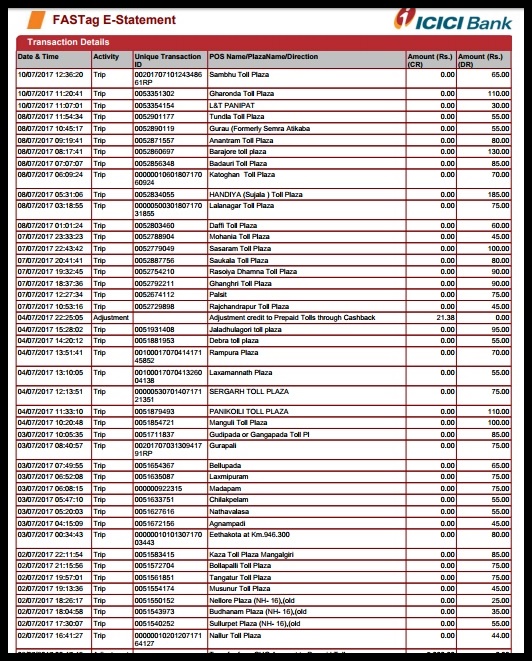 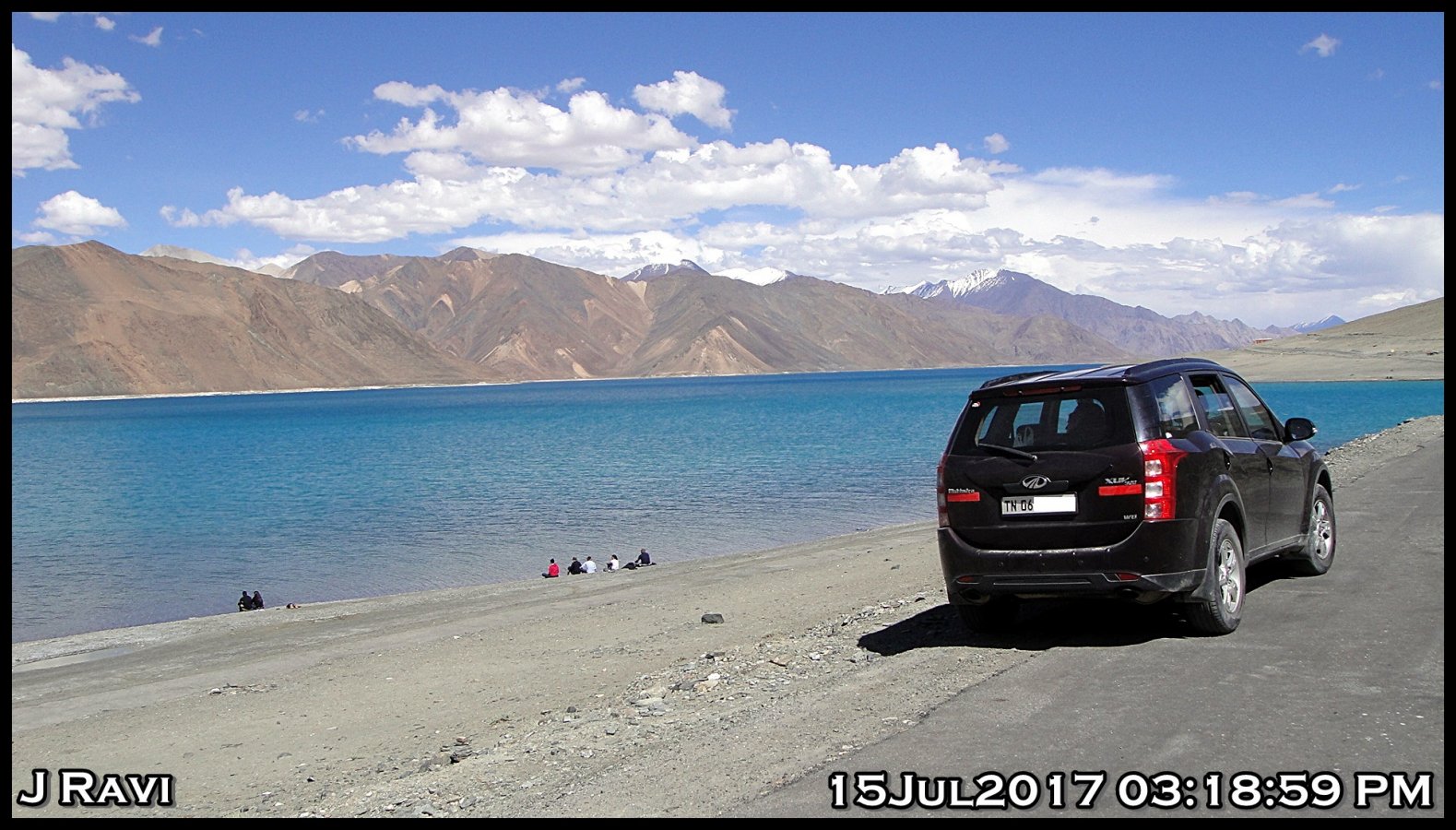