Reading and waiting for more. Hats off to your driving spirit sir, to your co-passenger and to your linea.
Bring on the juicy bits of the tour now

Thank you, mindless wanderer, for the compliments.

We love your blog... please keep it flowing.
Ofcourse your Linea is your Linea, "The Linea" would sound better than "My Linea" .... just a suggestion ...

Kaboooooooooooooooooom: Wrong suggestion its always My Linea for J Ravi and many other Linea owners You dont call "The children", "The brother", "The sister "....do you ...

Nice set of pics...too much of "My Linea", we agree it is your Linea

sourav2688 said:
Hats off to your driving spirit sir, to your co-passenger and to your linea.
Click to expand...

Thanks a lot, sourav2688, for the compliments.

Kaboooooom said:
Ofcourse your Linea is your Linea, "The Linea"
Click to expand...

KurtRules said:
too much of "My Linea"
Click to expand...

Thanks. Everybody has his or her own style of writing. This is my style. I don't want to change it.

Viny said:
its always My Linea for J Ravi and many other Linea owners You dont call "The children", "The brother", "The sister "....do you ...
Click to expand...

Thanks, Viny, for pointing out.

Calling Linea as "My Linea" is a very FIAT specific thingie. Possessing a FIAT is like being part of a cult, in itself.

As I said earlier, there are NO FIAT DRIVERS, only LOVERS!!!!

mindless wanderer said:
As I said earlier, there are NO FIAT DRIVERS, only LOVERS!!!!
Click to expand...

Thank you, mindless wanderer, once again, for making it clear.

I did not pay any toll on the wretched stretches of North-South Corridor or Srinagar to Leh. But, my Linea did.

She lost one of the four mud flaps in the former and the remaining at the latter due to more than 50 severe underbody hits she was subjected to. Her rear right stop light was also burnt out at Leh. Other than these, she did not trouble me at all. No punctures, no clutch failure, no brake failure.

On 16 September 2011 [Friday], we breakfasted, packed, left Hotel Mirage, Srinagar, by 8 am and reached Sonamarg by 11 am only to be stopped at the check-post as the road was closed due to landslides at many places en route, which were being cleared by the BRO staff. Nobody had any clue as to when we would be allowed to proceed. 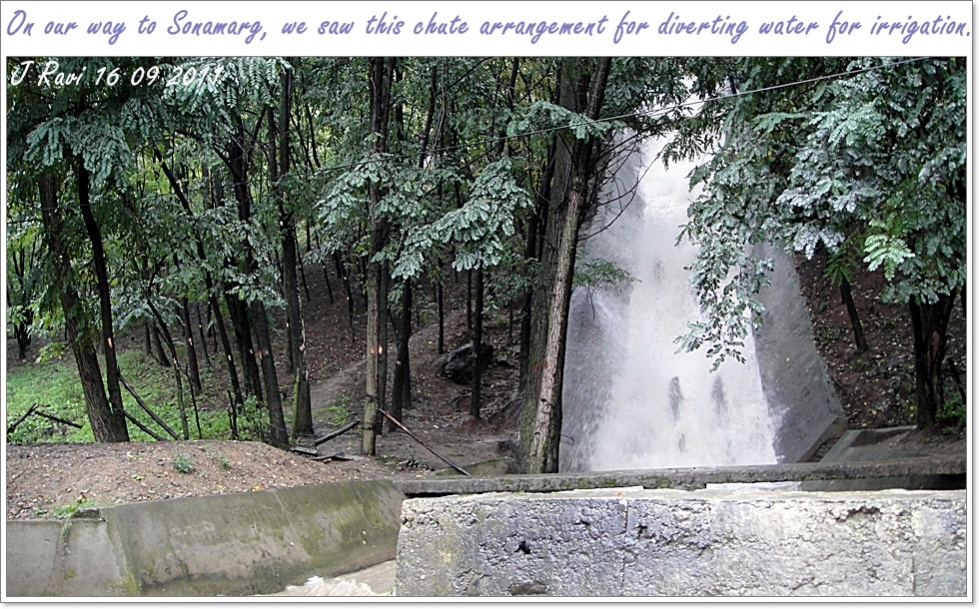 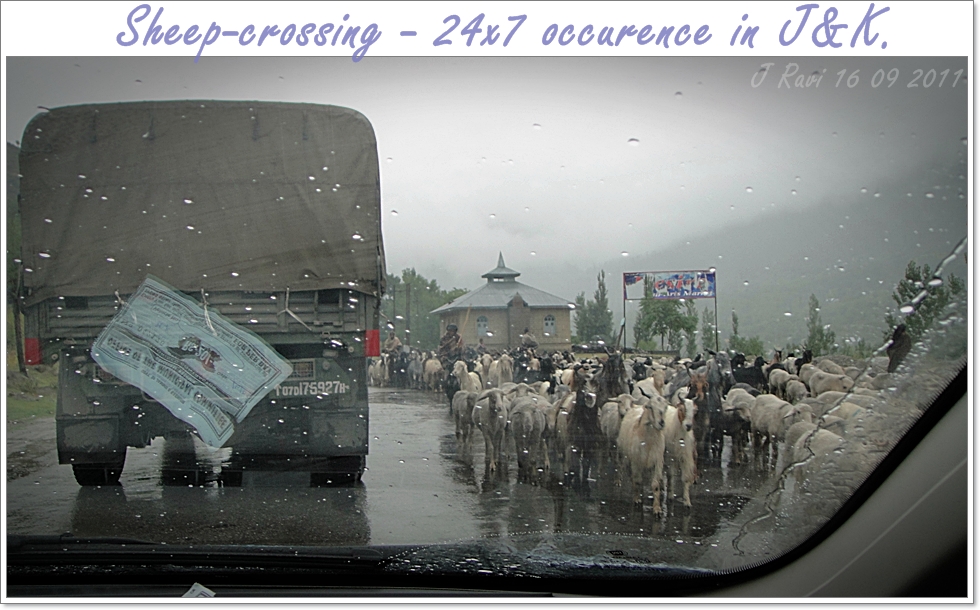 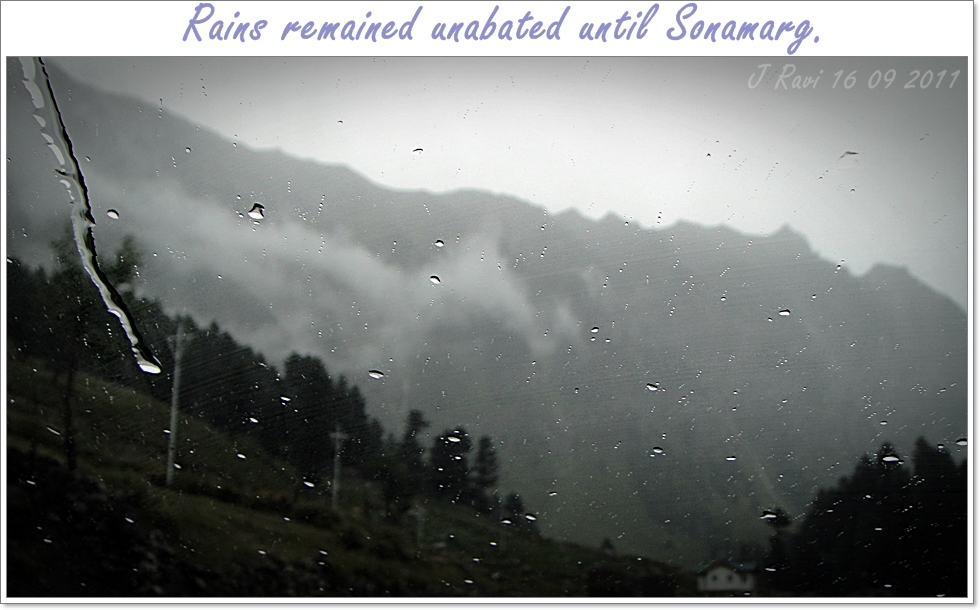 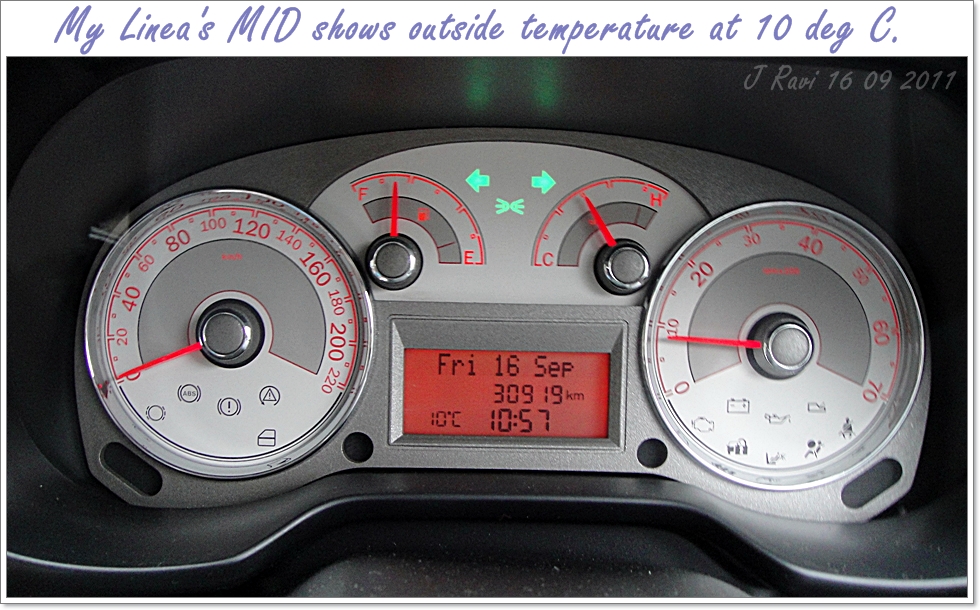 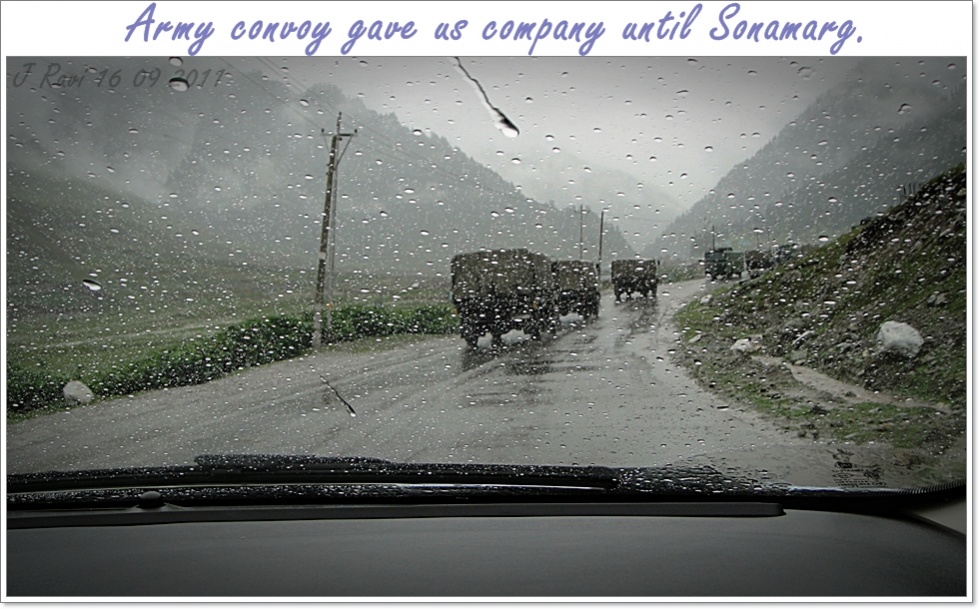 We were forced to take a room at JKTDC's Alpine Resorts and enjoyed a nice post-lunch siesta. I got up in the evening only to find that the rain had stopped, but check-post still remained closed. I spent some time exploring Sonamarg and clicking some mesmerizing photographs with bright sunshine alround. 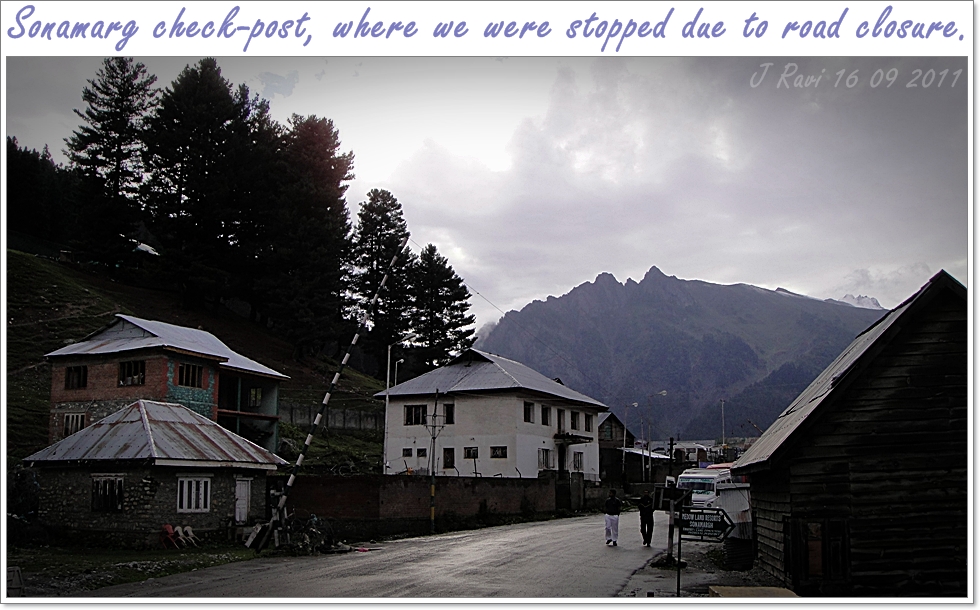 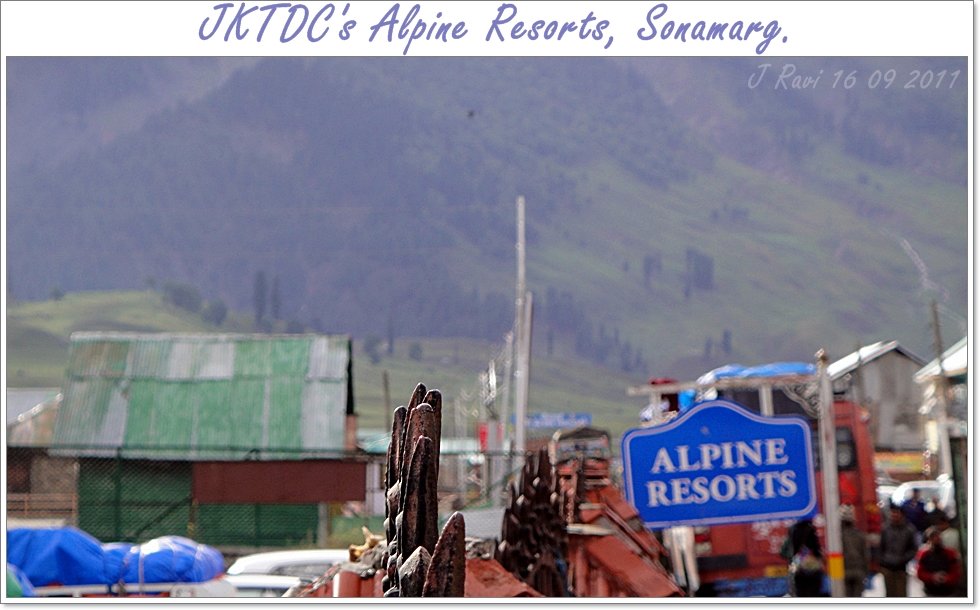 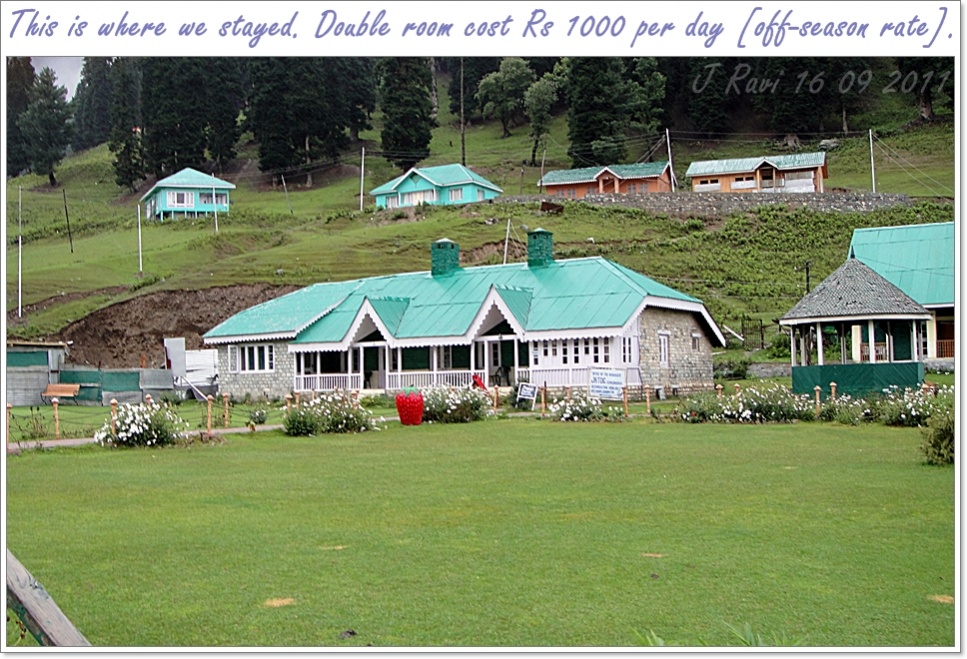 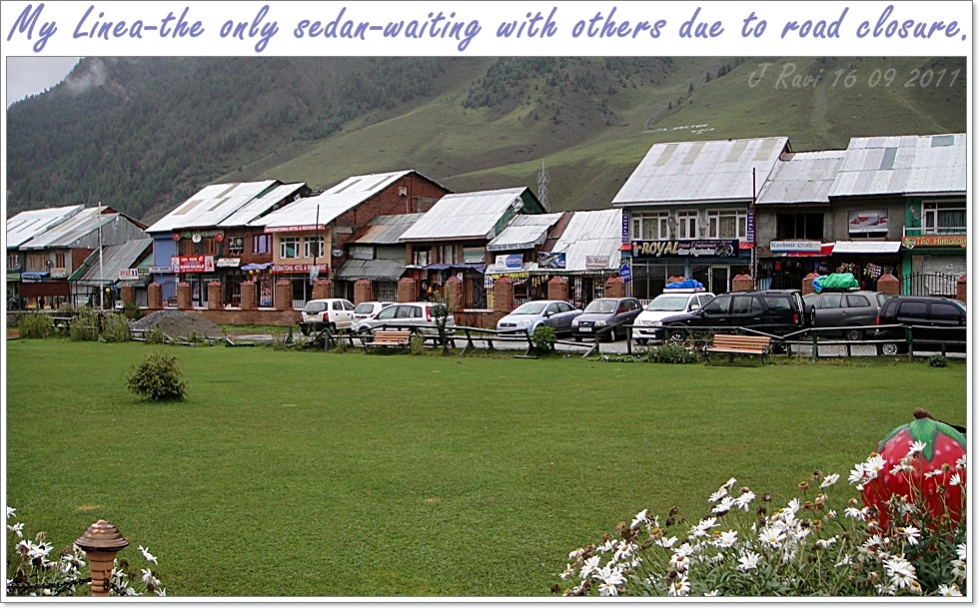 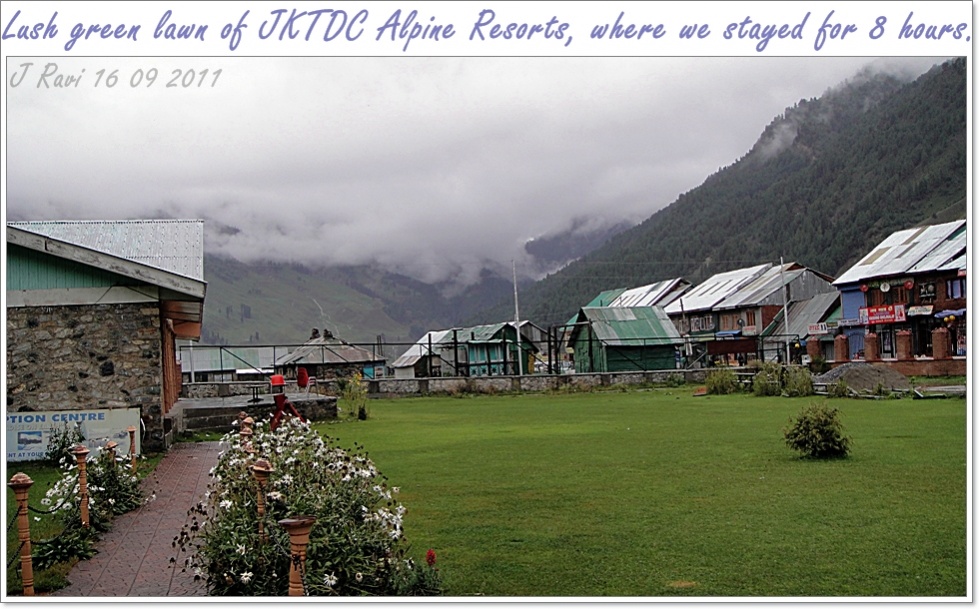 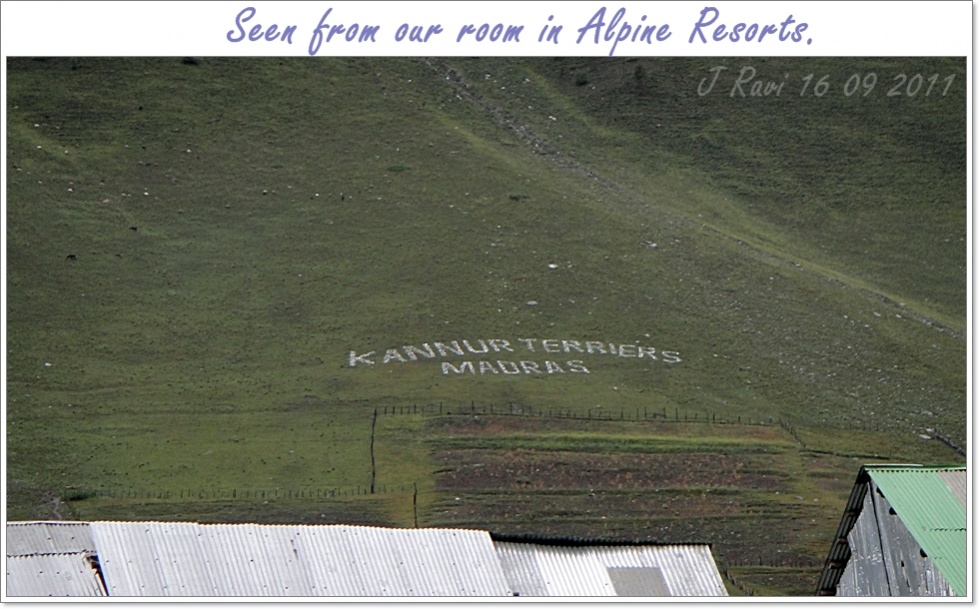 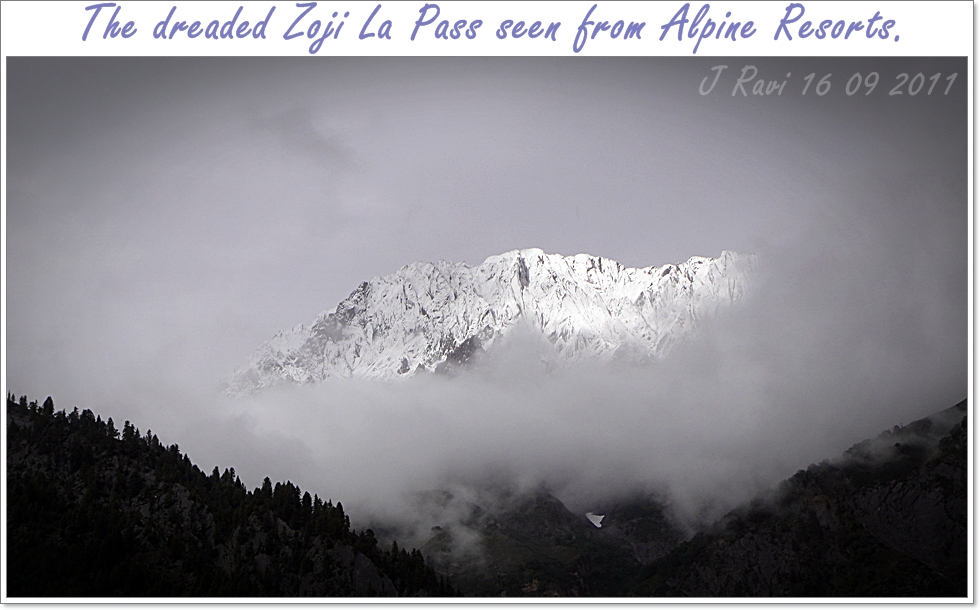 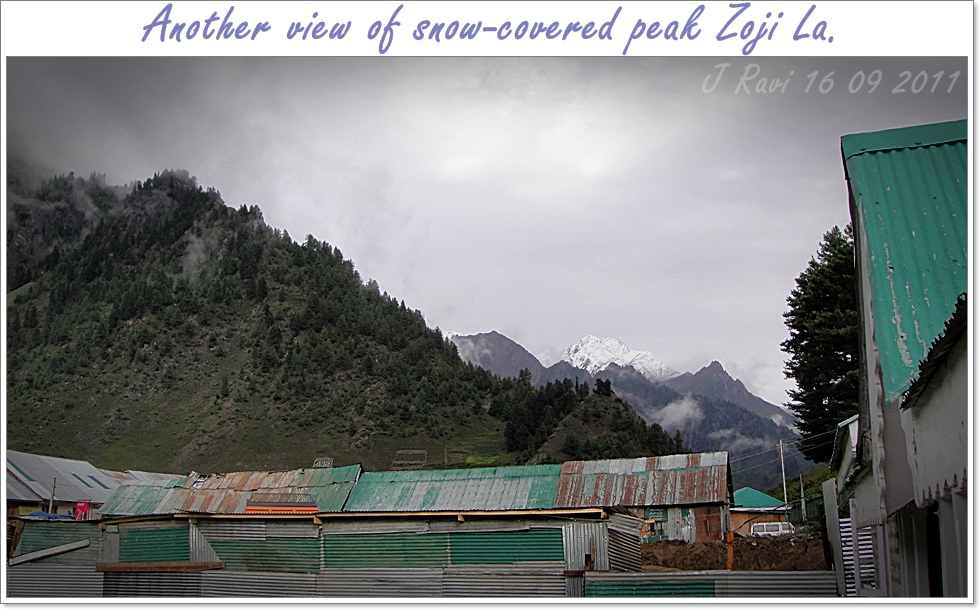 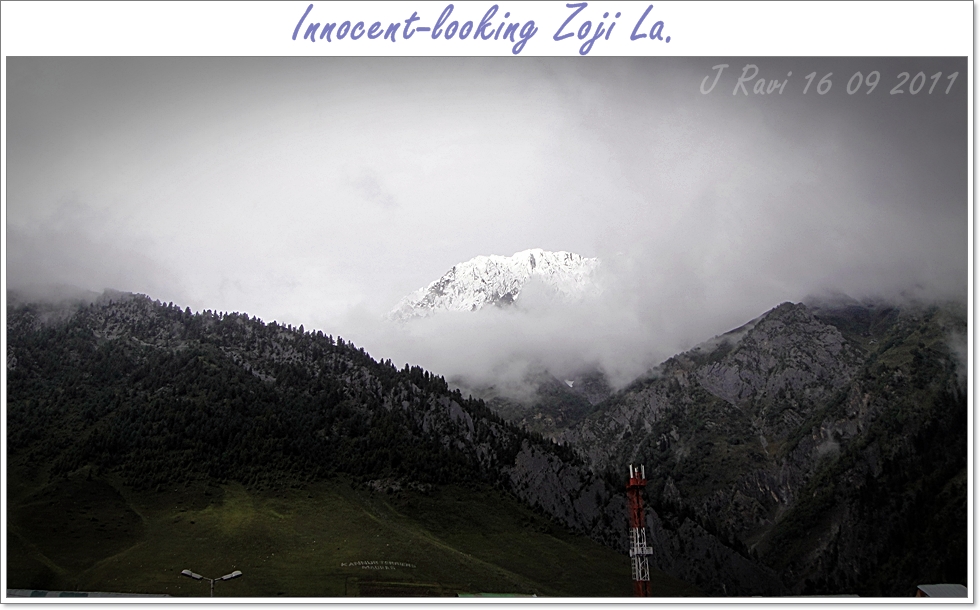 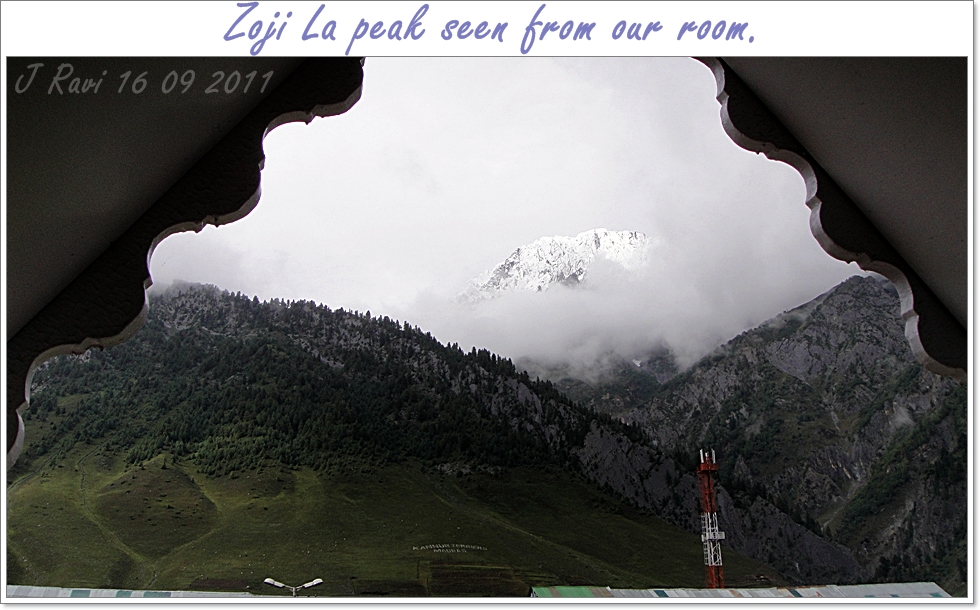 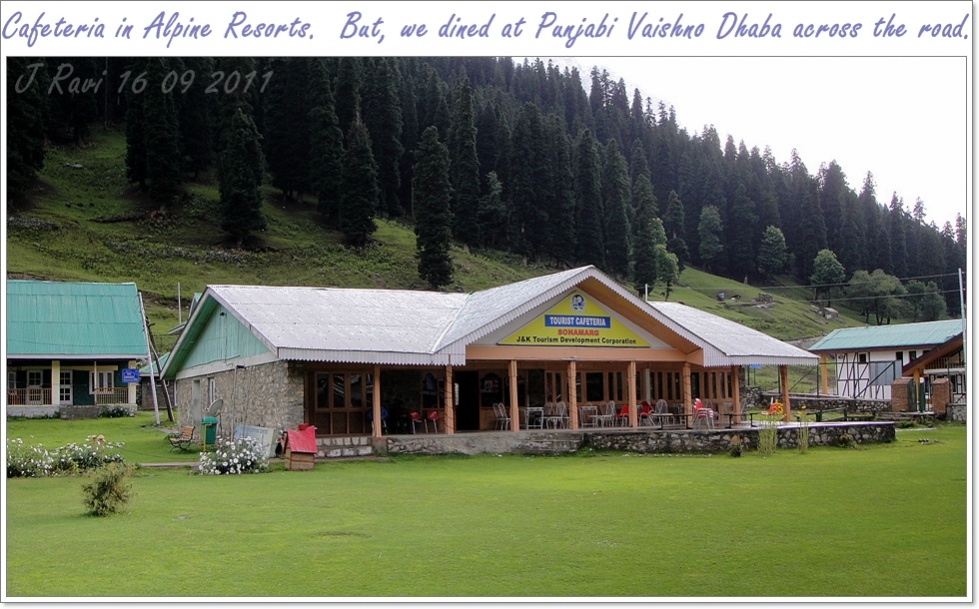 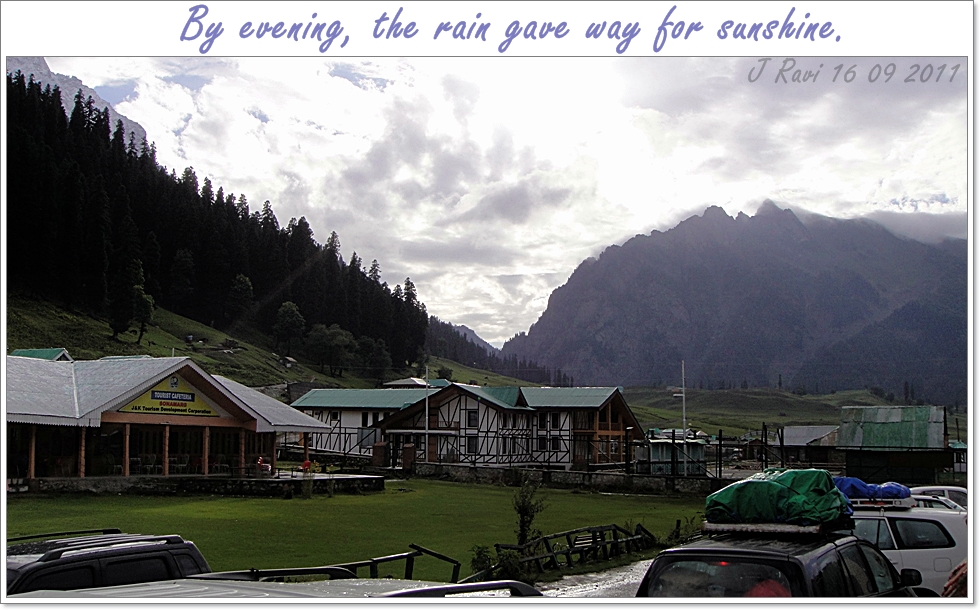 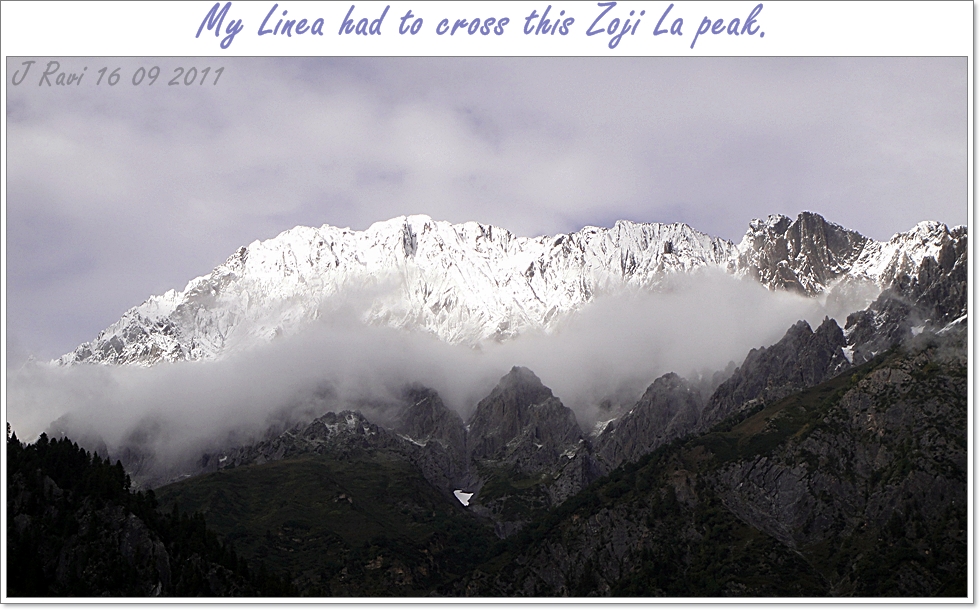 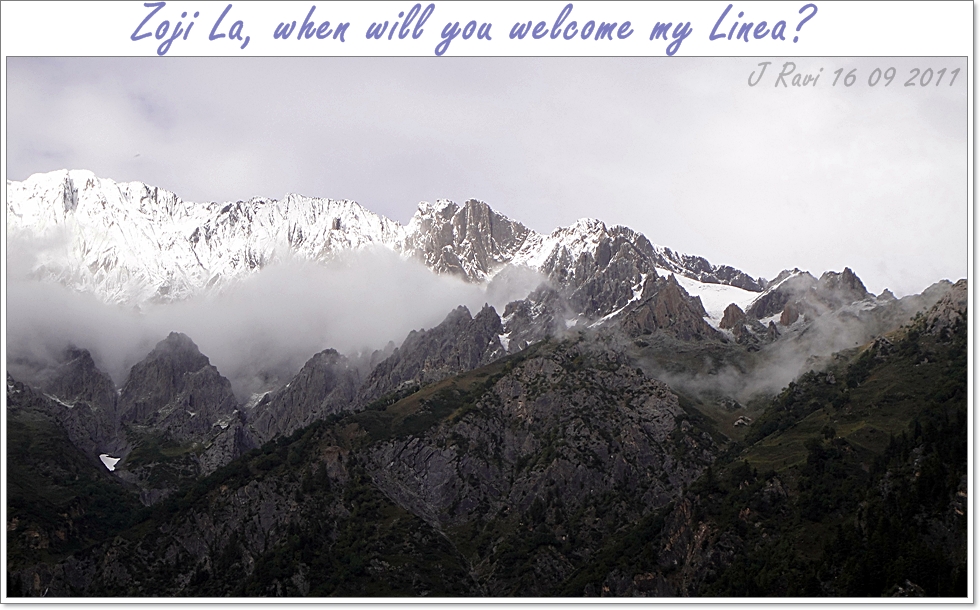 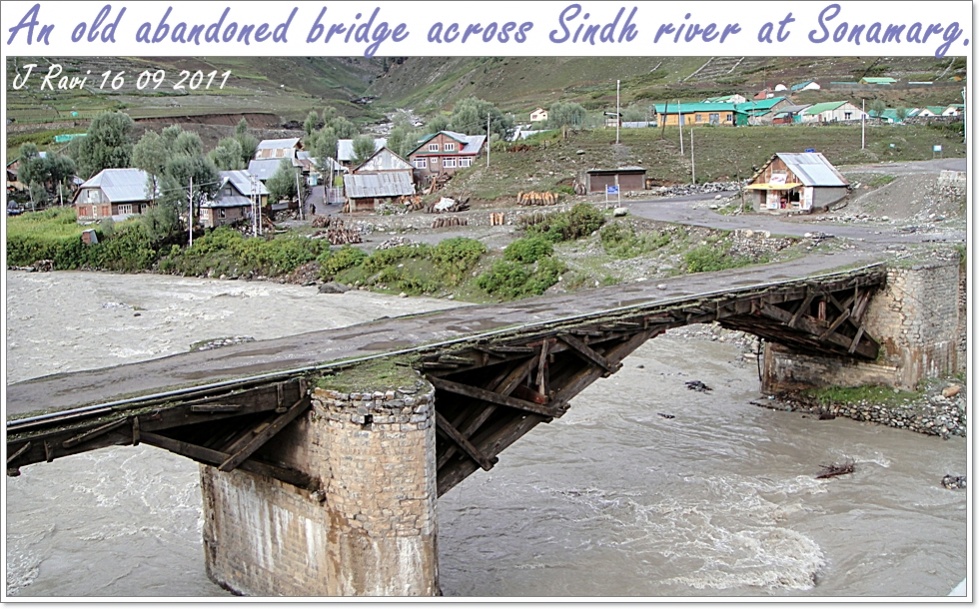 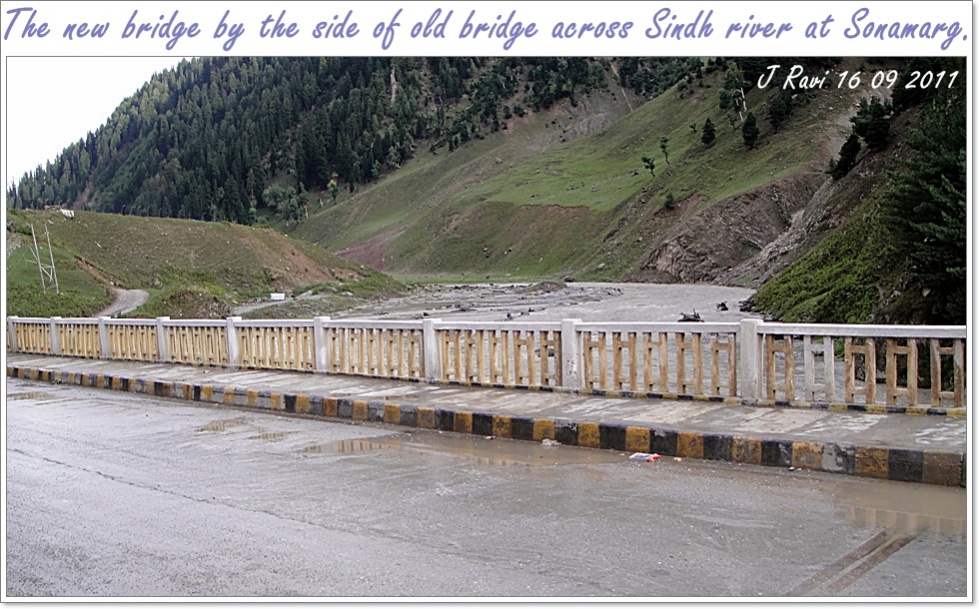 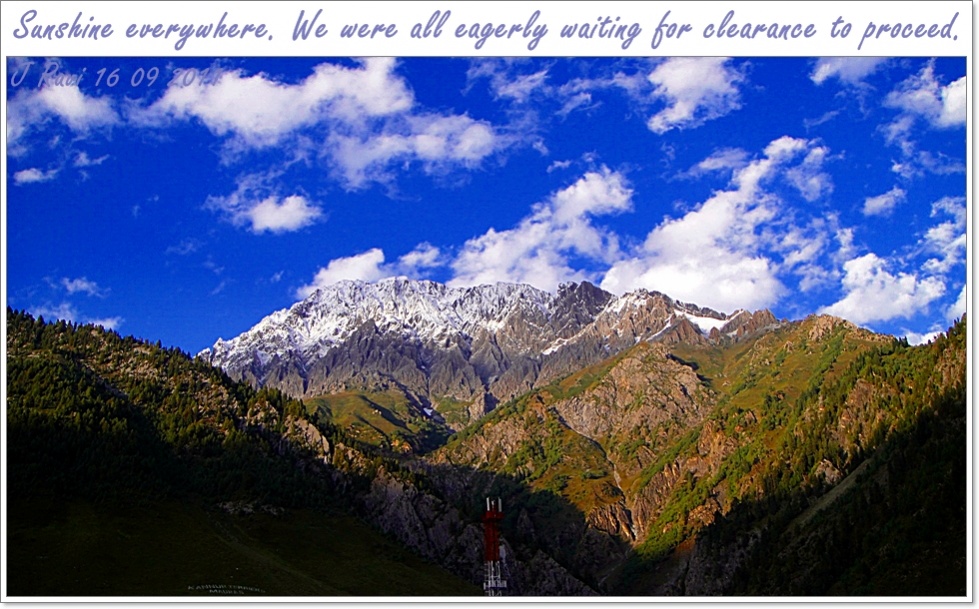 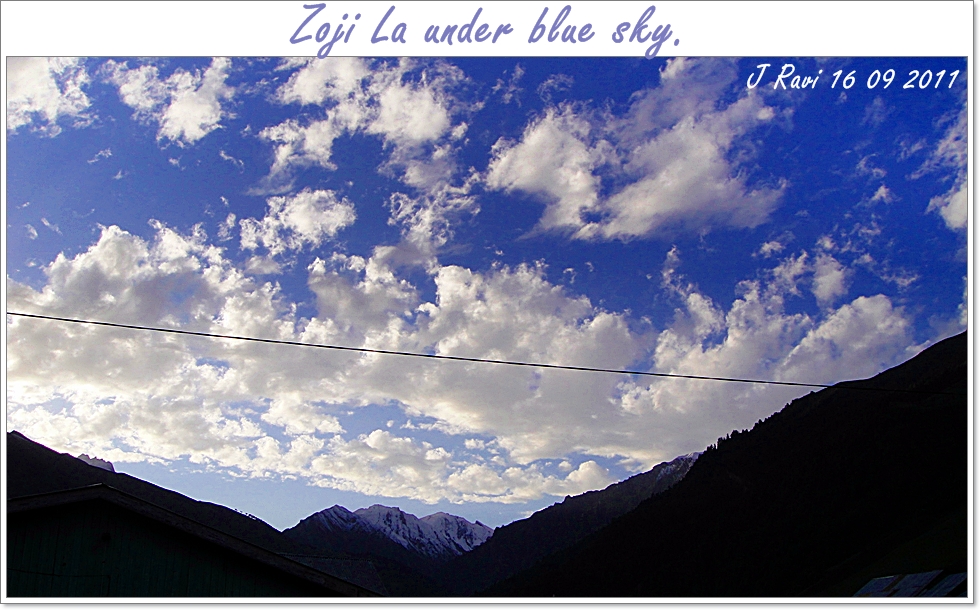 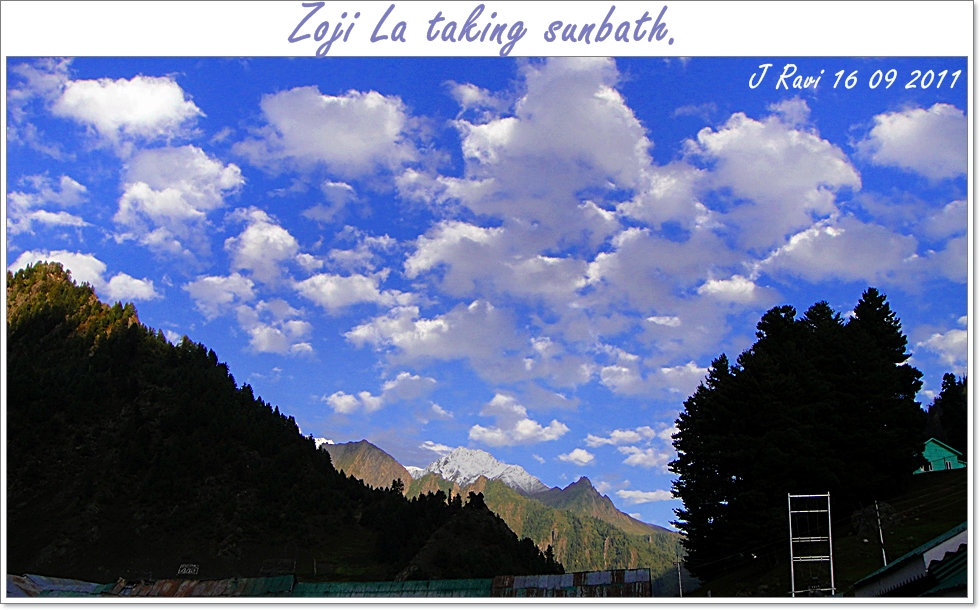 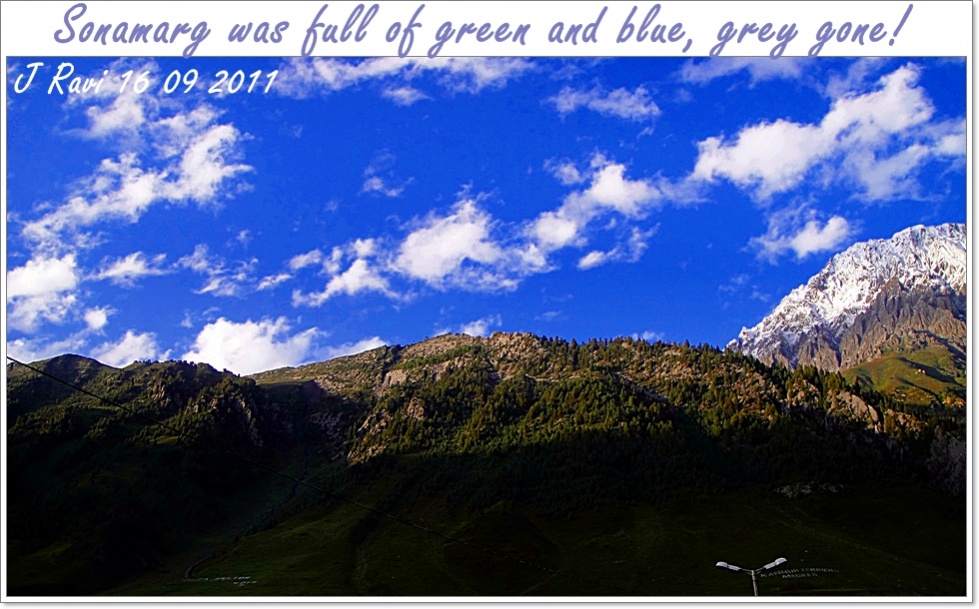 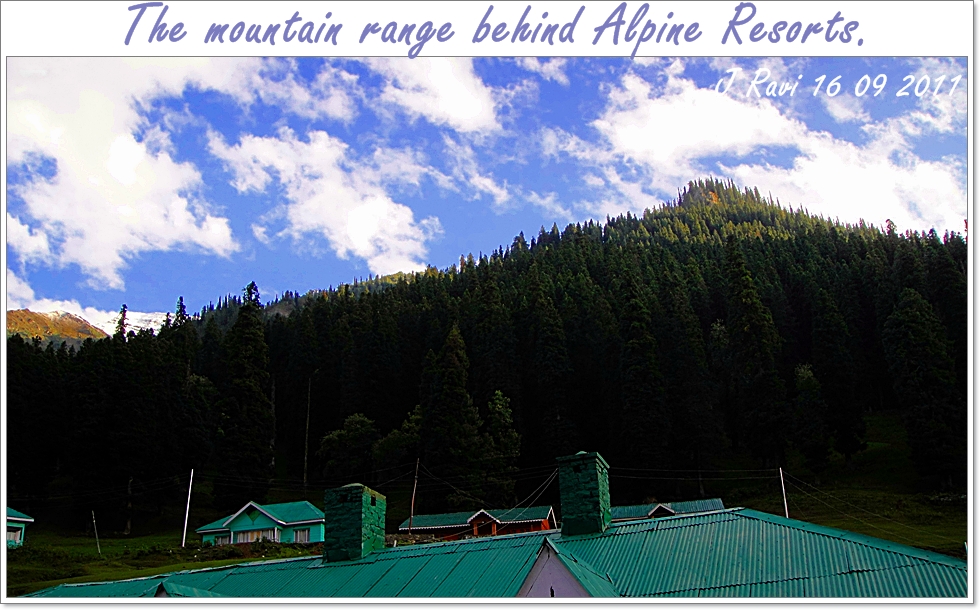 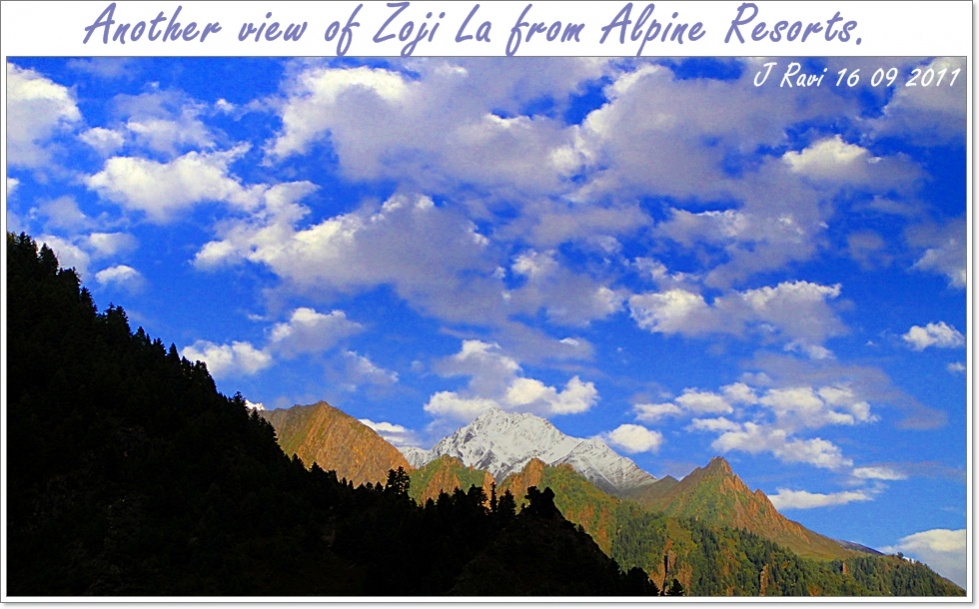 While we were eating our dinner at a Punjabi Vaishno Dhaba, I witnessed a flurry of activities with all types vehicles zipping past the dhaba. Later, I came to know that check-post had opened its gates up to 10 pm that night. Again the gates would be open only at 10 am, the next day. So, we also jumped into the bandwagon. We packed and left Alpine Resorts by 8:30 pm to Leh. 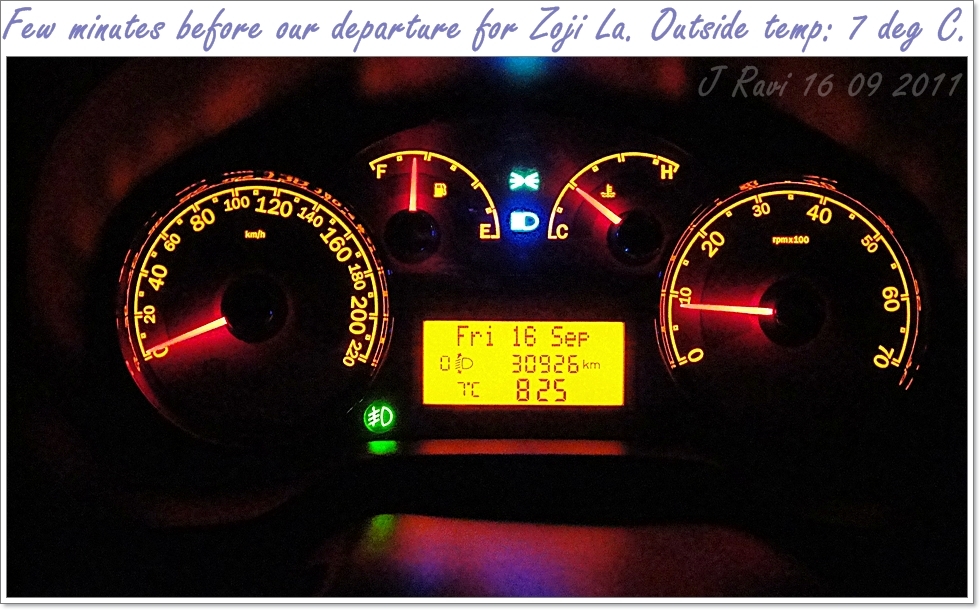 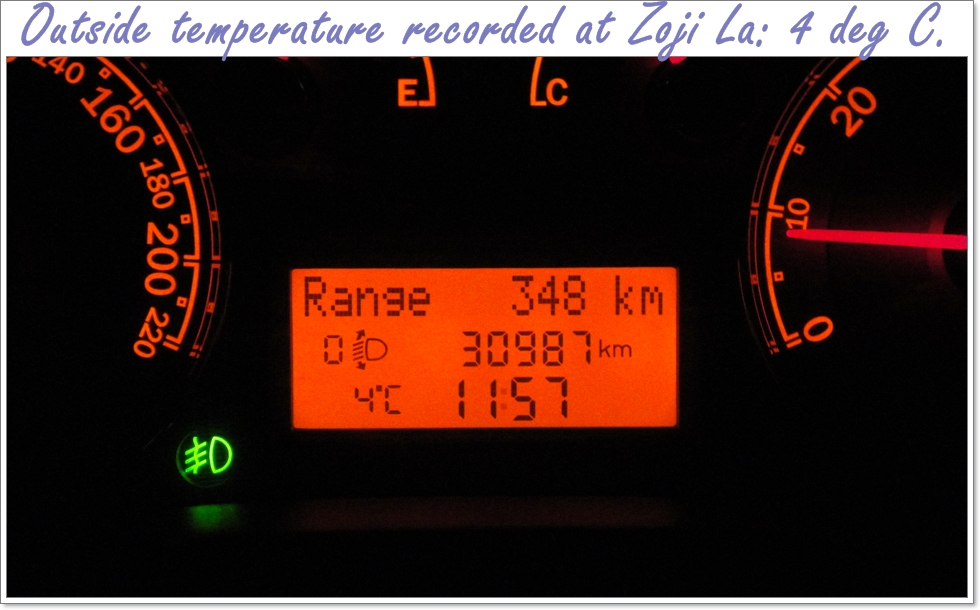 Post check-post, NH 1D was like an airport's runway, perhaps it was similar to the calm before the storm. After a few km, the road became rough. When we started acsending Zoji La, it became a deadly combination of steep+narrow+rocky+slushy+pot-holed/cratered stretch without any crash-barriers or parapet. I knew what was in store for me and my Linea. Hence, I drove with my fullest concentration.

At one steep hair-pin bend, my Linea got stuck, refused to move forward and her front tyres started spinning without traction. I saw the ORVM. No vehicle was behind me. So, I reversed my Linea for a few metres, slotted the first gear and accelerated, drove in the maximum speed and my Linea passed the rocky bed successfully due to momentum. I continued driving my Linea with one wheel on each mound leaving the craters in the middle.

After some distance, the road became full of slush of 1'-2' in height. So, I reduced the speed and drove slowly. But, that turned out to be a blunder. Again, my Linea got stuck on a rocky terrain with a loud thud. I tried the same trick of reversing her. But, my Linea did not budge. She refused to go either forward or reverse! Literally, my Linea was hanging on a rocky cliff without any traction on any of her wheels. Whenever I tried accelerating her, the tyres would spin without any movement. Suddenly, my wife screamed: 'I could feel a burning smell, switch off the engine!'. I too smelt burning rubber. We both froze, literally, metaphorically and spiritually. I cursed myself for getting stuck in my Linea at a godforsaken place at Zoji La at night 10 pm without any help available. My four decades of driving experience grounded at Zoji La along with my Linea.

I switched off the engine and came out of my Linea. The outside temperature was freezing 4 deg C. I saw about 3 pairs of headlamps of vehicles climbing Zoji La. The first one was an Innova taxi. After seeing the road blocked by my Linea, one gentleman got down and came to me. I sought his help to move my Linea. He called his co-passengers and instructed them to assist me. Four persons including the driver of Innova alighted. Two of them pushed from the left side of my Linea and two from behind. I started the engine, accelerated slowly, my Linea moved with a screeching noise, came out of the clutches of the rocky bed. After some distance, I signalled the Innova to overtake me, but they kept following me.

After some distance, again the same story repeated. The same symptoms, the same thud, my Linea got stuck again. This time, the Innova gentleman walked up to me and offered service of one of his drivers to drive my Linea up to Leh! I politely declined his magnanimous offer. Again, with the Innova guys' help, my Linea resumed her forward movement. I profusely thanked the Innova guys and continued the journey.

After this incident, I started driving my Linea at a higher speed not bothering about bottom-scraping. To my relief, the clutch seemed to work normally. So, the burning smell was due to spinning of front tyres on the rocky bed. My Linea did not face any more problems.

The Innova followed me up to Kargil. Innova guy informed me that petrol pump at Kargil would open at 6 am only and he too wanted to fill up his Innova with diesel to go to Leh!

So, after driving up to Kargil, I parked my Linea at IOC petrol pump at 3 am, allowed her to idle with ACC at 20 deg C and we slept.

But I must say that its just too unnecessary adventure to take Linea to Leh. And I am saying that after being to Leh in Indica, Esteem, Scorpio, SX4 (twice).

with such cars it feels like a mission rather than a vacation, unless you like such vacations . Though vacation for me is a safe level of adventure.

BTW Crossing Zozila Pass at night is suicidal if you are not a local driver, I crossed it 4 times in last 15 months, and I was super scared every time.

We were in Padum while you were crossing Sonmarg, and believe me that was one scary day. Clouds were just too too dark and people told us that it looks similar to last year cloud burst. and then we heard the news of Zozila closed for a day due to land slide
Nonetheless waiting for next lot of pics
Last edited: Oct 2, 2011
You must log in or register to reply here.
Share:
Facebook Twitter Reddit Pinterest WhatsApp Email
Top