List of things to carry for a winter trip to Ladakh

Where i can get STIKAGE products, pls?

Yogesh Sarkar,
if i may take the liberty of adding three items for the 4 wheeler guys, since space in not a problem in a 4 wheeler, and it did save us a lot of trouble, or maybe made our trip a vee bit better.
1. 12 Volt Eectric Portable Compressor. It saved us valuable time no not having to change a tyre for a whole day, which would have also meant blocking half the road in order to get hard stable ground for the jack. We filled air three times that whole day, and made it from other side of Rohtang all the way to beyond Manali. before we decided to stop for a puncture repair. And the location of puncture was such, that we could not have done it without removing the wheel.
2. Camping Stove. the other item that saved us was the camping stove...works on anything.. from petri to diesel to kerosene..... luxury.. i don't know...... when we were stuck for long durations on three days, we just pulled it out and made our tea. fortunaltey it did not come to making Maggie, but we were carrying enough Maggie packet to get stuck for a week, hahaha.
3. Camping Utensils. Super compact packing, super light. it was a pleasure to use it... in an earlier trip we had carried normal house hold utensils, and it was cumbersome and occupied too much space.

. For one of my next trips, planning to throw in snow chains for wheels....... hahaha.. .yes boss..... need to raise the level of adrenalin .....any suggestion from where i can get them.
. and just for affects ... a 3 man tent, water proof and wind proof, has already been acquired,,,, free off course.. from the PayBack points.....
. it was so nice to be at the confluence of Indus and Zanskar rivers, just laid back, and someone said... wish there was tea,
zap... we did not need any more excuses.... but... given the strength of the wind,,, we had to find a rock, and then sit in a manner to shield the stove with our own body, and make tea....
And thank you soo very much for the contacts for getting good equipment in Delhi, I had gone to Kamla Nagar Market, and had absolutely no choice to pick up items.
My only issue is that i don't want to fly in to Leh... want to make it by road...and then head to the locations....and that is a big problem.....by the time the passes open from both sides... and then when i get there....i won't need the snow chains...
And just for effects... putting up three images.... ( i hate to write something and not attach a image with it... hahahaha)

1. Thats my son who lit up the camping stove. 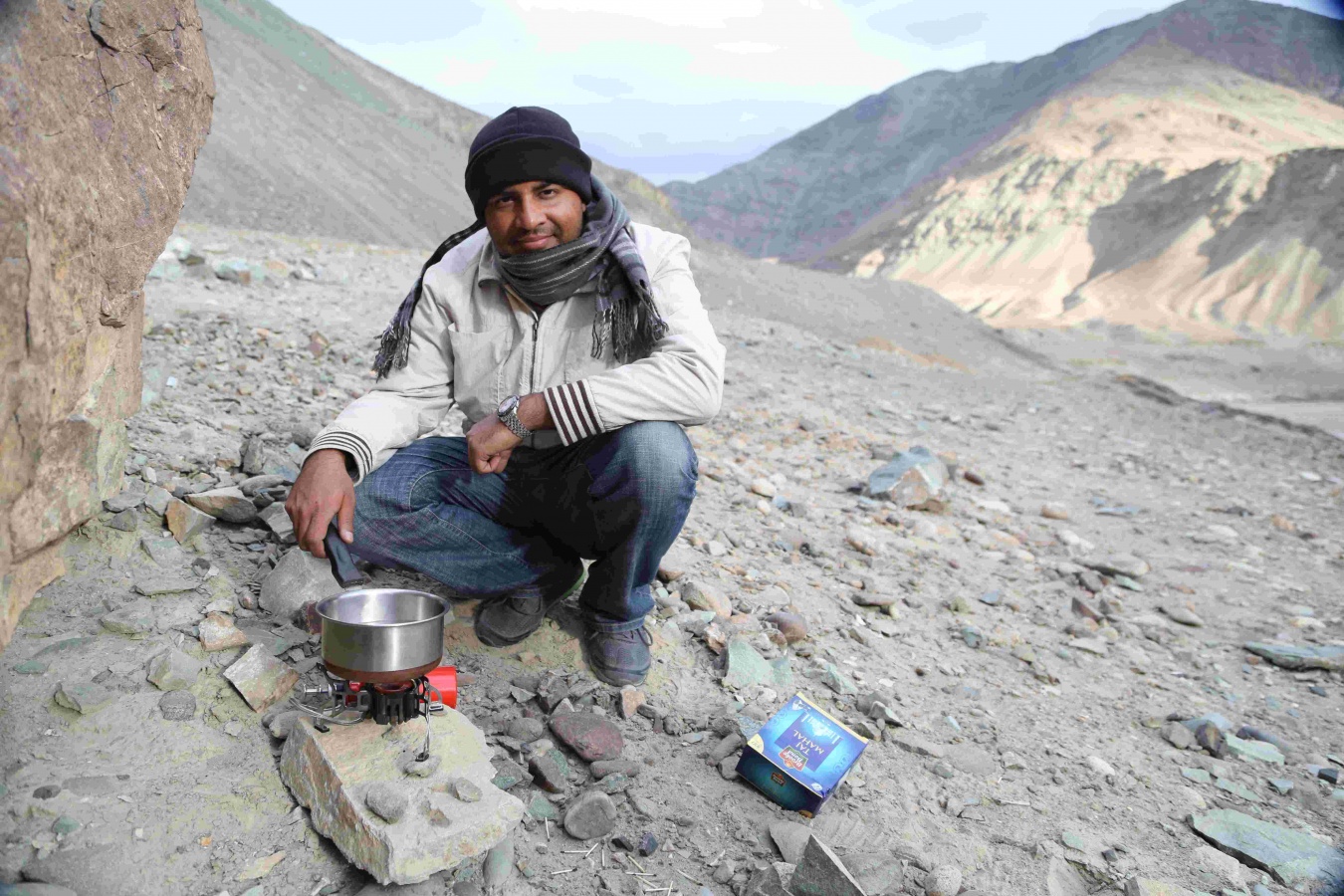 2. Thats my daughter in law making the magic tea. 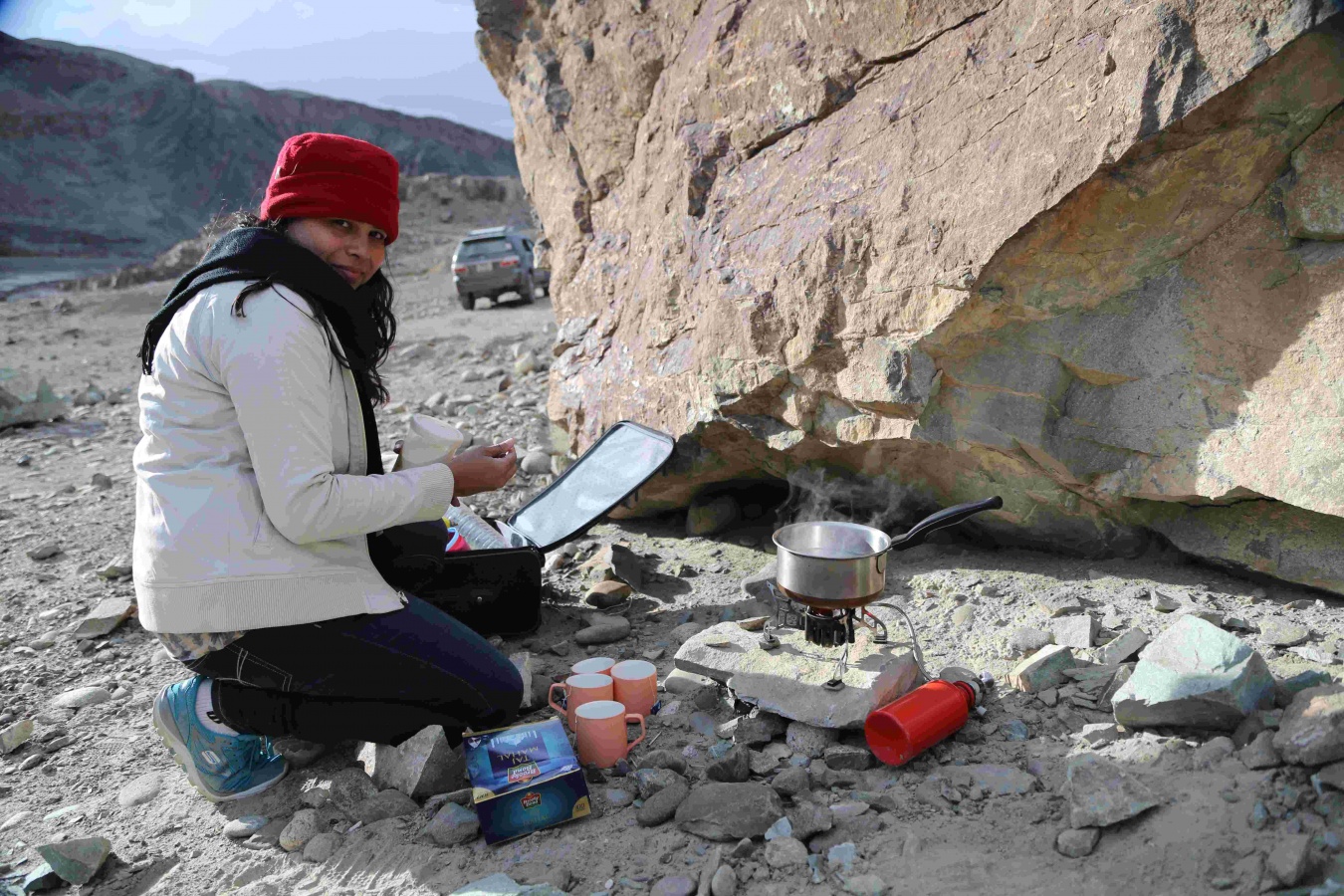 3. And that is me .... whoever invented tea, need to be given a gold medal 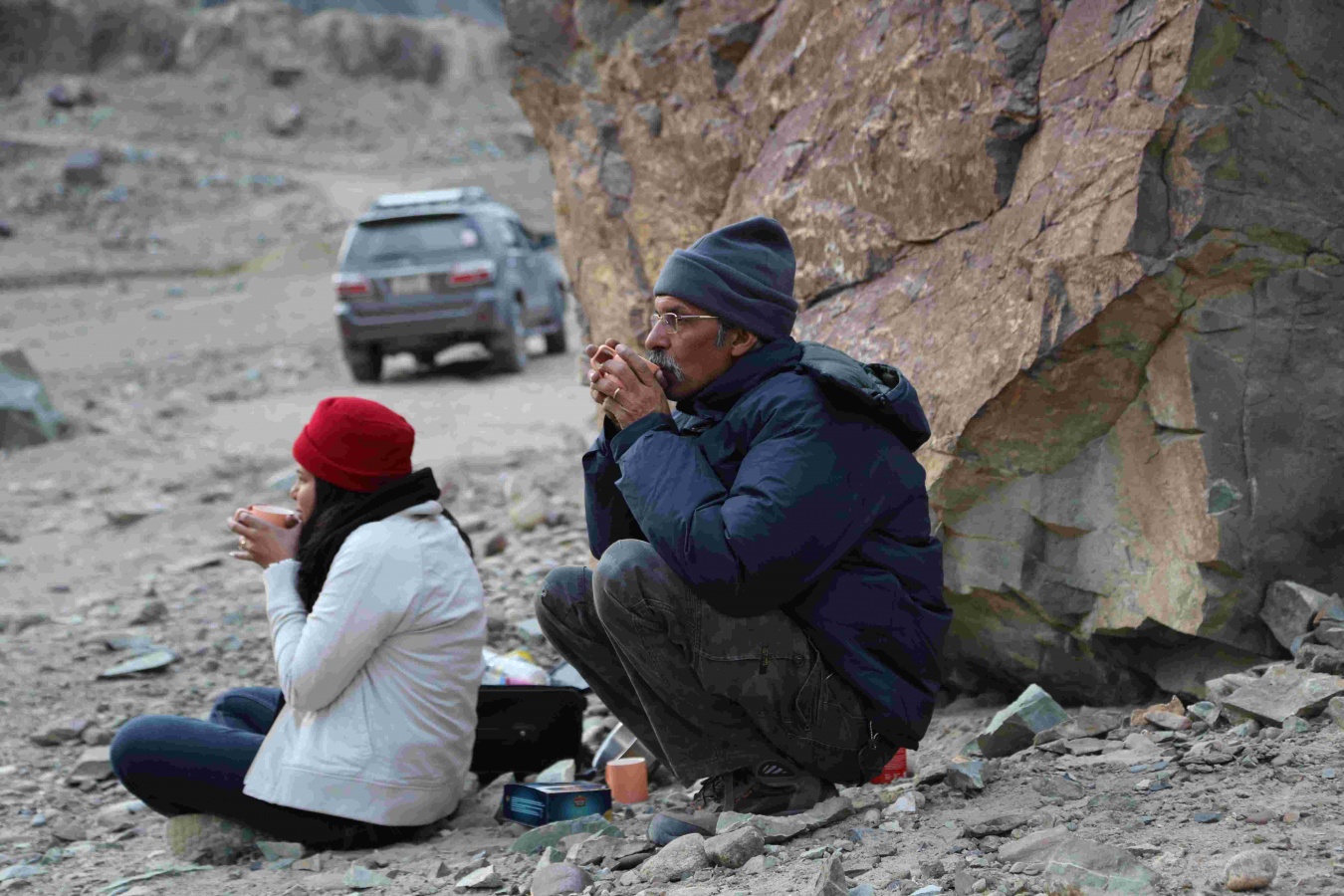 Hello Sir, where i can a camping stove (Run on Petrol, Diesel & Kerosene) pictured above? how much?

aravindkuladeep said:
Hello Sir, where i can a camping stove (Run on Petrol, Diesel & Kerosene) pictured above? how much?
Click to expand...

vikasb said:
Thanks for the tip Alok bhai ... Me to Dabur Laal Dant Manjan karta hu

Yogesh Sarkar said:
Jacket: You should ideally have a down jacket or parka, which is warm enough to withstand temperature as low as -20 Degree Celsius and a similar styled lower to go with it. If you aren’t able to find such a warm jacket or are unwilling to spend that much money, you can get a warm oversized jacket (make sure it is air proof) and wear a warm sweater, sweatshirt and warm inner underneath it to keep yourself warm. Carry at least couple of warm sweaters with you, so that you can add another layer if the need be or in case your sweater gets wet.

Lower: You can get your lower custom made for your requirement from any trekking equipment manufacturer eg. Carrabin Okhla (011-41611082, 9810002676, 9873780333, 9818889767) in Delhi (I got my lower made from there) or buy a good quality down feather one. Just make sure the material used to construct the lower is air and water resistant, and has enough filling to keep you reasonably warm. Below the warm lower, you should wear warm inner from the likes of Neva and a jeans or pajama, depending on how cold you feel.
Click to expand...

Dear YS,
Can you please guide me on the type of jacket and lower that I should buy for my upcoming trip to Ladakh in winters..??
And is it really necessary to have a lower..? (I would be wearing a thermal inner + Denim Jeans anyways)

I look forward to your guidance

I and one of my friend are going to leh on 11th sep, we are both seniorcitizens , we are planning to hair a Inova taxi from delhi to Manali to leh , leh to sirinagar to delhi, we have sixteen days in our perposal, is it ok for us.

Yogesh Sarkar Hi Yogesh... I am going Ladakh in November end. I have Forclaz 100. would they be enough at this time of year?