Pros:
1) First of all, while riding I don't have to stop in case some one calls. Automatic incoming call connection.
2) Music on the go, without having the trouble of cord hanging here and there.
3) Dual Visor, so don't have to worry about changing visor during night rides.
4) Redial (One long press and it redial last number called)
5) Voice GPS navigation using Sygic.
6) Visor lock, preventing visor vibration at high speed.
7) Removal padding.

Being a LS2 helmet, I had a doubt in my mind if it is genuine or not. On closer inspection I didn't had any doubt.
My hunt for a good helmet started in the month on March 2014. My primary focus was on safety. But, I wanted few other features also which are as follows:
1) LED on the back of helmet after seeing Snehith (@snehithpereira) and Suvrajit(@suvraganguly) helmets.
2) Dual Visor.
3) Good Ventilation.
4) Solid color or very minimum graphics (I don't like helmet with lot of graphics)


So my search for helmet started, visited multiple showroom in Bangalore. On visiting these showrooms I saw numerous make and model of helmet like HJS, Cross, Vega, LS2, SOL etc. During one of my visit in Lalbagh I found this shop Adeshwars Auto Zone, in their apart from the usual stuff which I have already seen, they showed me LS2 FF310. As soon as I found that I have in-built Bluetooth I thought of taking it. But, this was the first time I saw a helmet with in-built Bluetooth. So again, I visited all the showrooms which I have visited earlier, the only difference this time was I was looking for a specific make and model. Apart from doing offline search, I started doing online search also regarding the particular model. But, this entire search comes to a dead end since this was not a very popular model of LS2.
Then I thought of giving it a try and again went to Adeshwars Auto Zone. Tried the helmet again checked the Bluetooth connectivity and tried making few call. Once I was satisfied with the safety and feature, comes the hard part of bargaining. The initial price was INR 9,700, after several round of bargaining the price on which we decided was INR 9,000.
On the way to back home, I thought of using the newly acquired helmet. As soon as I crossed 40kmph, I felt that some fighter jet is making a pass over the sky because of the noise. After sometime when I noticed the noise again then I thought a fighter cannot be hovering over my head and realized that it the wind noise caused by helmet. Since, I was already in love with the helmet, didn’t thought of returning it. Next day, while riding played music and the wind noise was not noticeable.
Did a few run on highway from Bangalore to Chitrdurga and from Bangalore to Velneshwar. During the Velneshwar ride, we were on road for around 24 hours, didn’t had to charge it. On the way return from Velneshwar, it rained heavily and not even a single drop of water came inside helmet and Bluetooth function correctly.
Tested it in heavy rain for around 30 mins with Bluetooth ON and again the same result.

I have attended few calls on highways. Voice clarity and mic is very good, during call other person will never know that you riding.

Control can be easily operated with gloves also.

Didn't got any chance to test multiple device communication.

Finally, satisfied with helmet I choose. 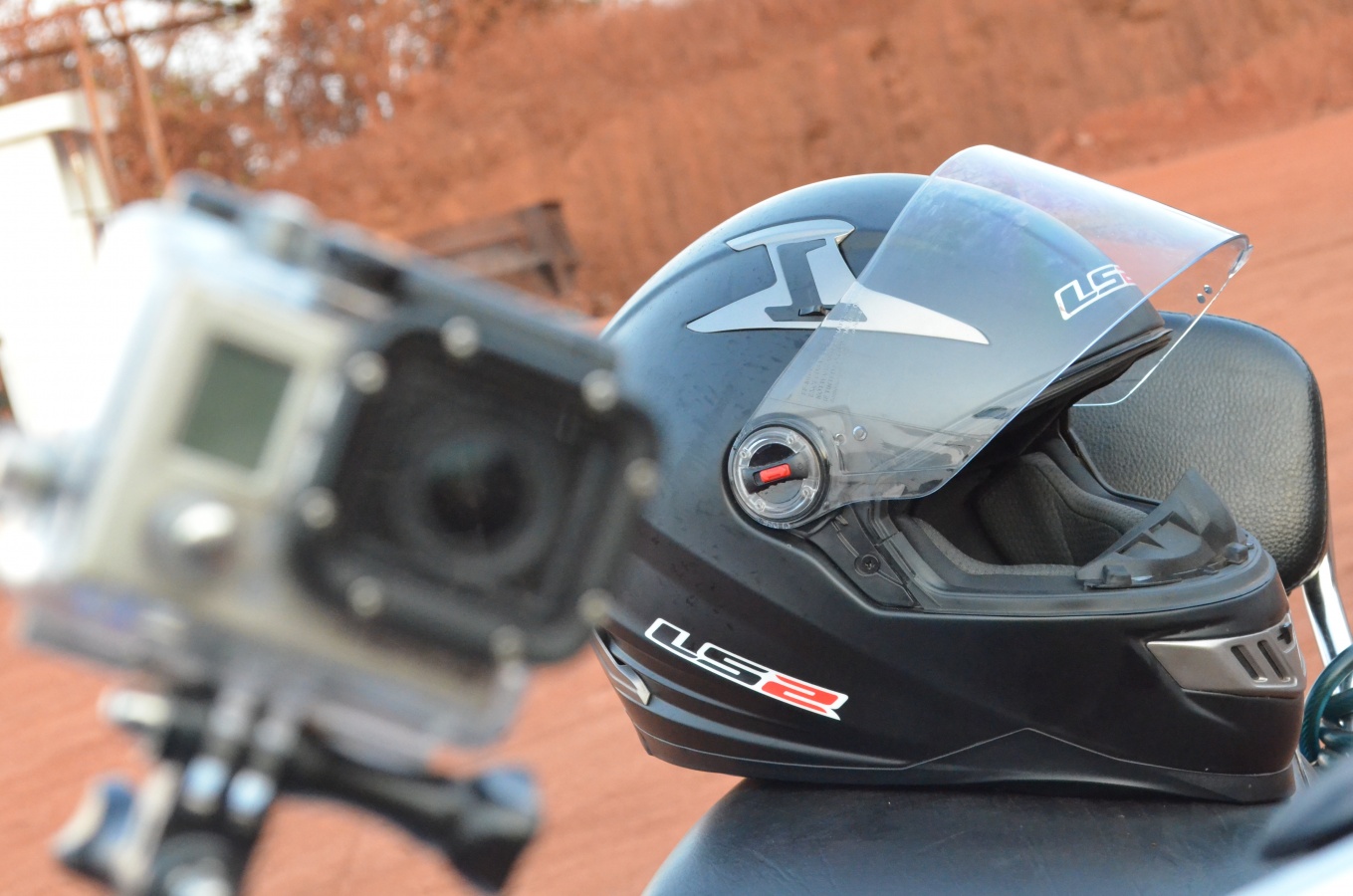 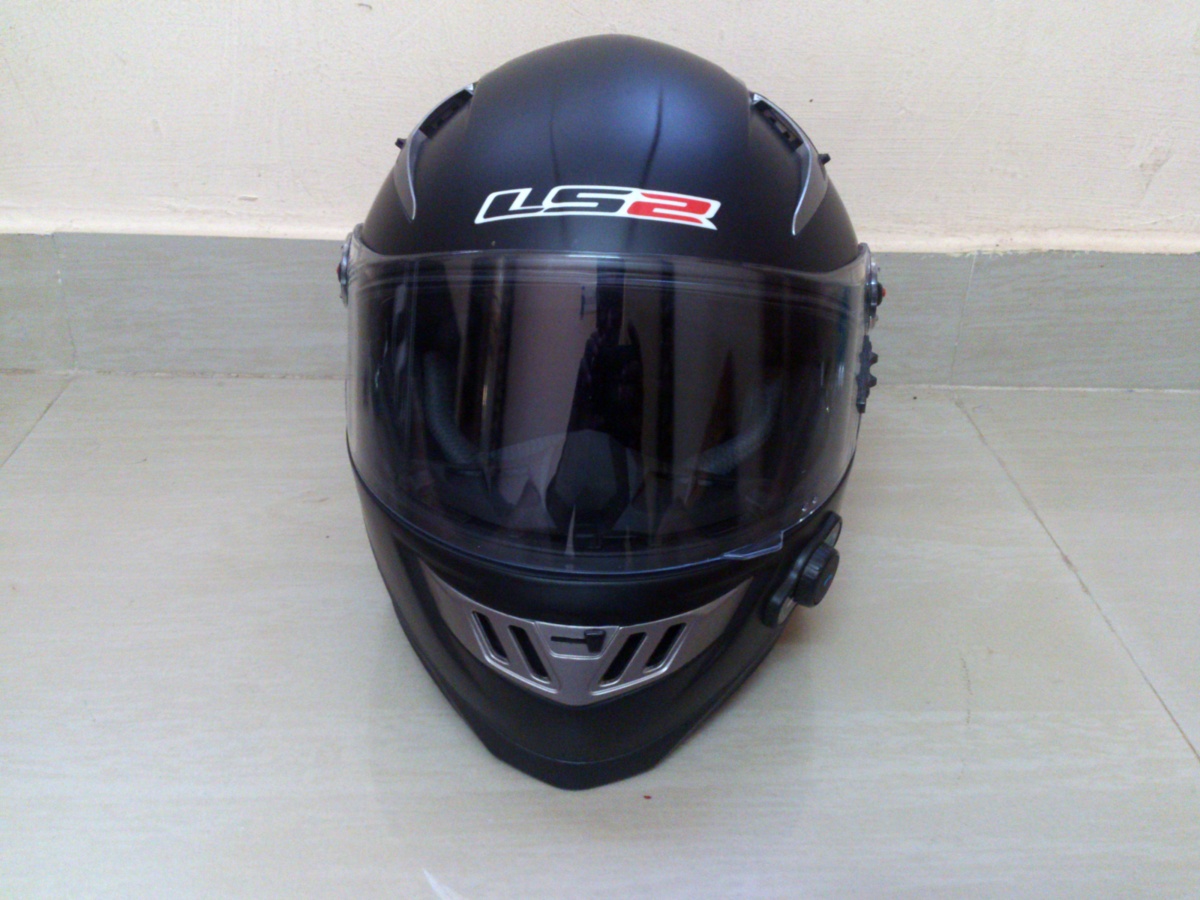 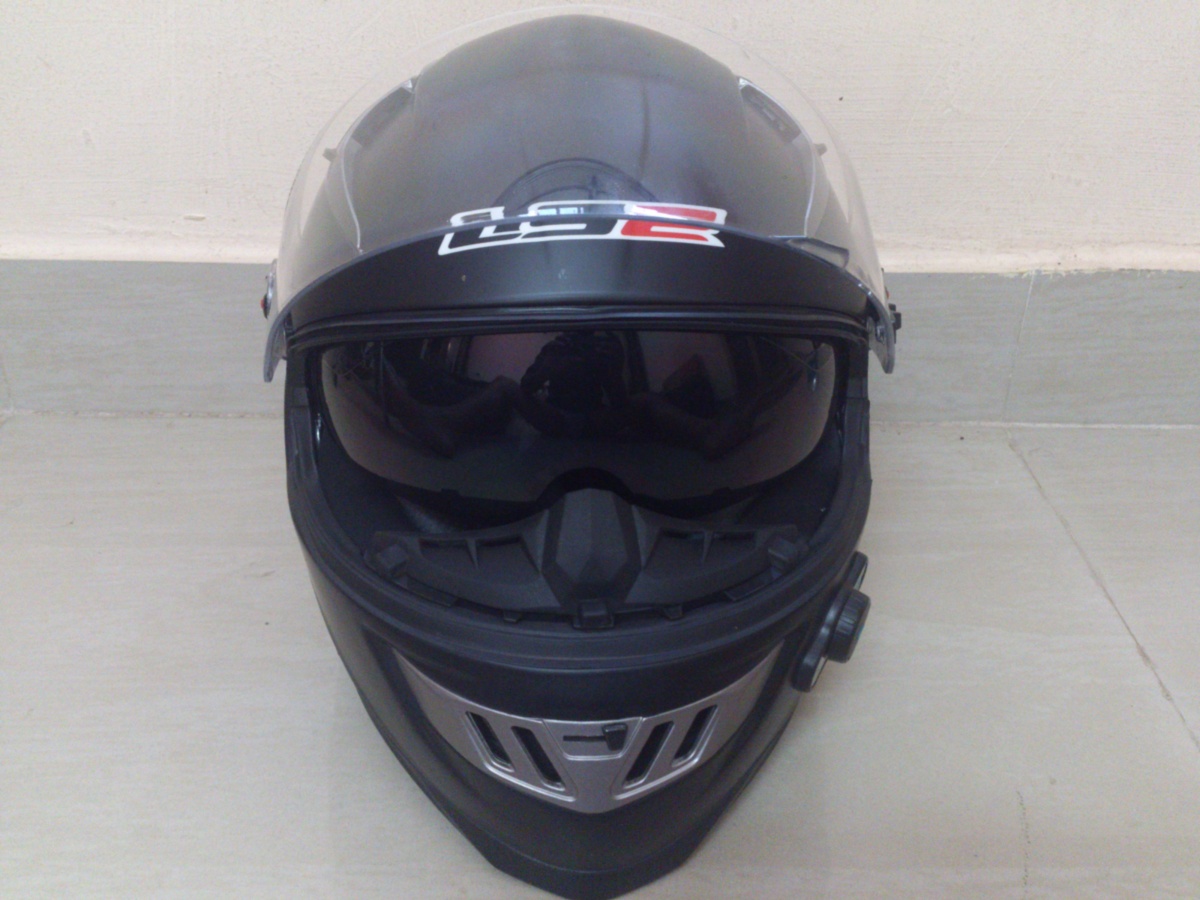 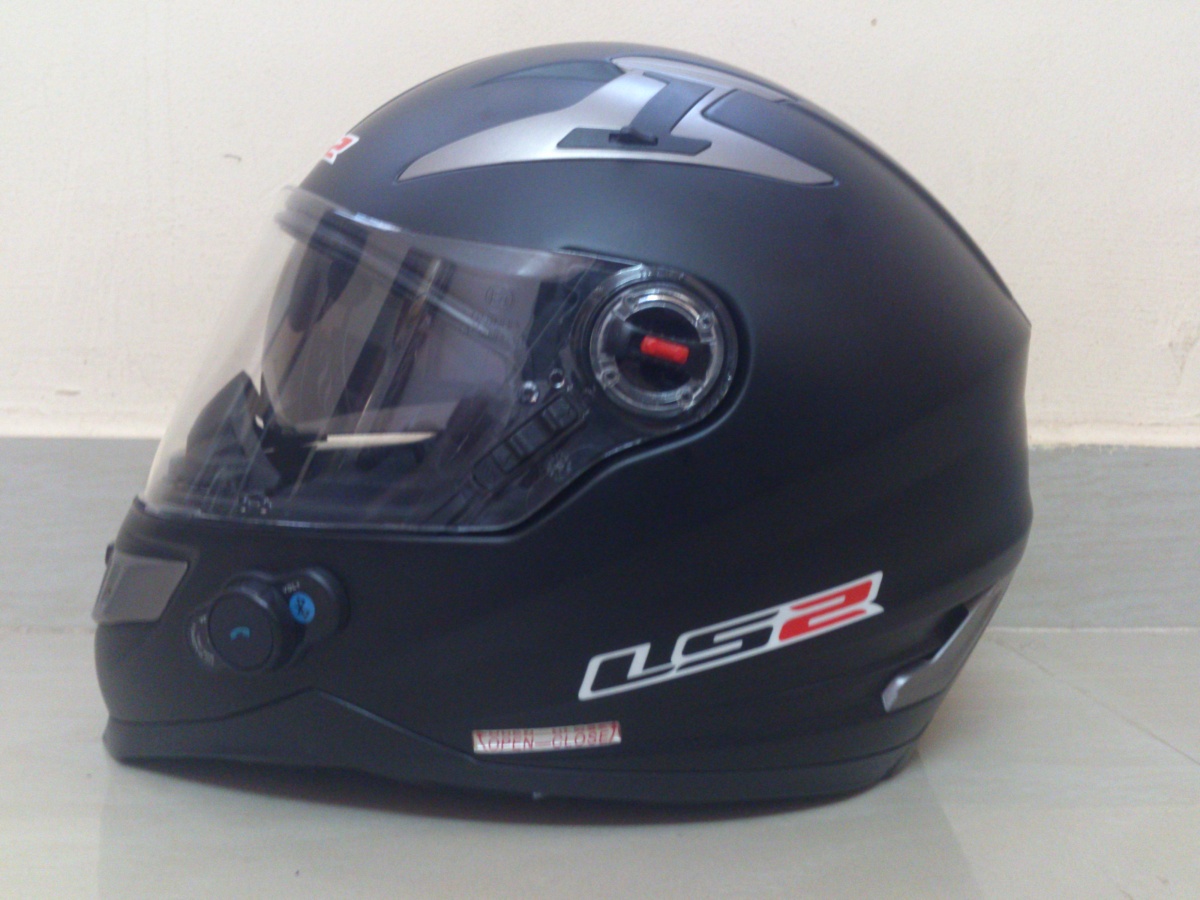 Control panel for Bluetooth
- Round blue with Bluetooth icon is power on/off button. Have to press it for long to switch the Bluetooth on/off.
- Button with call symbol is used to connect/disconnect calls. While playing music same is used to play/pause music
- Around the button with call symbol is knob, used for increasing/ decreasing volume during call and while playing music. Same is used to play next/ previous song. Twist and hold will change volume, where as, short twist while playing song will play next/ previous song.
- On the left we have indicator. 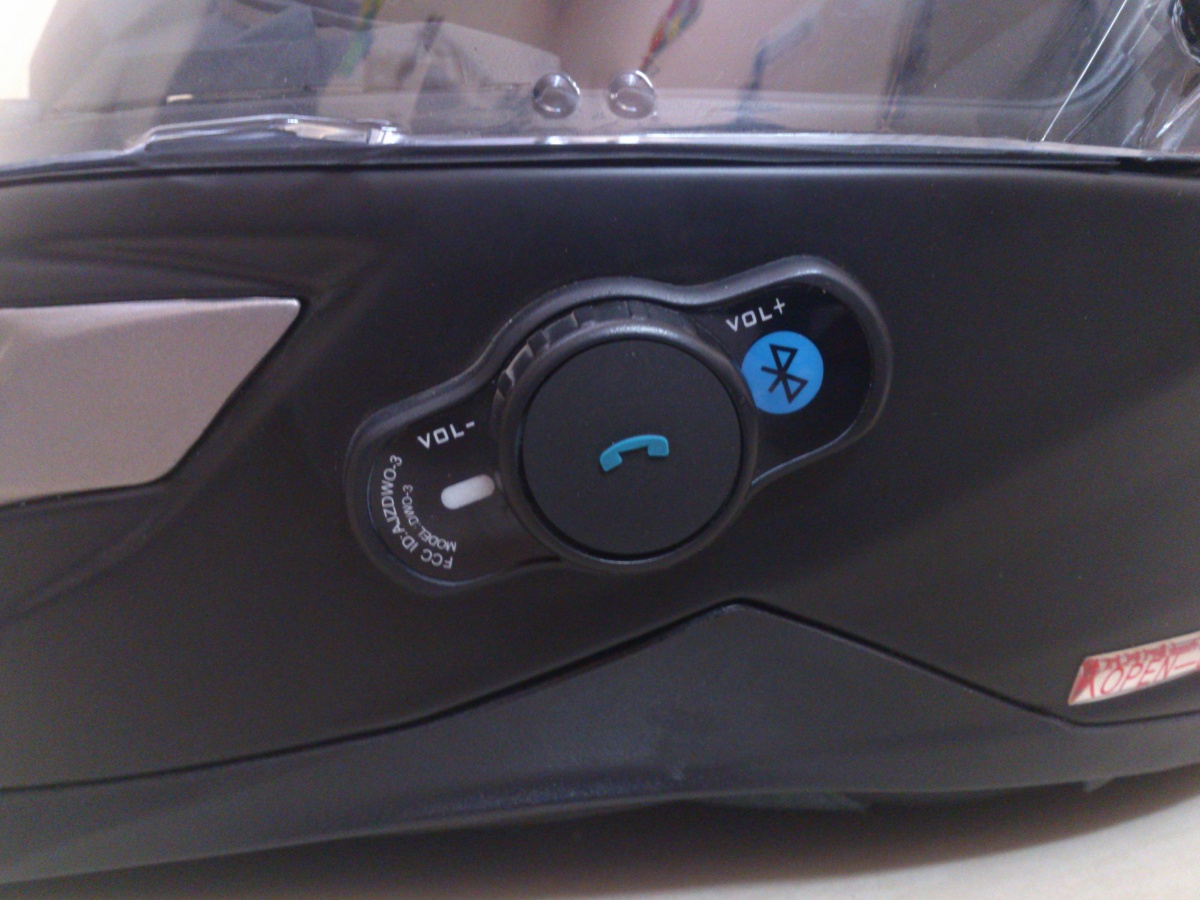 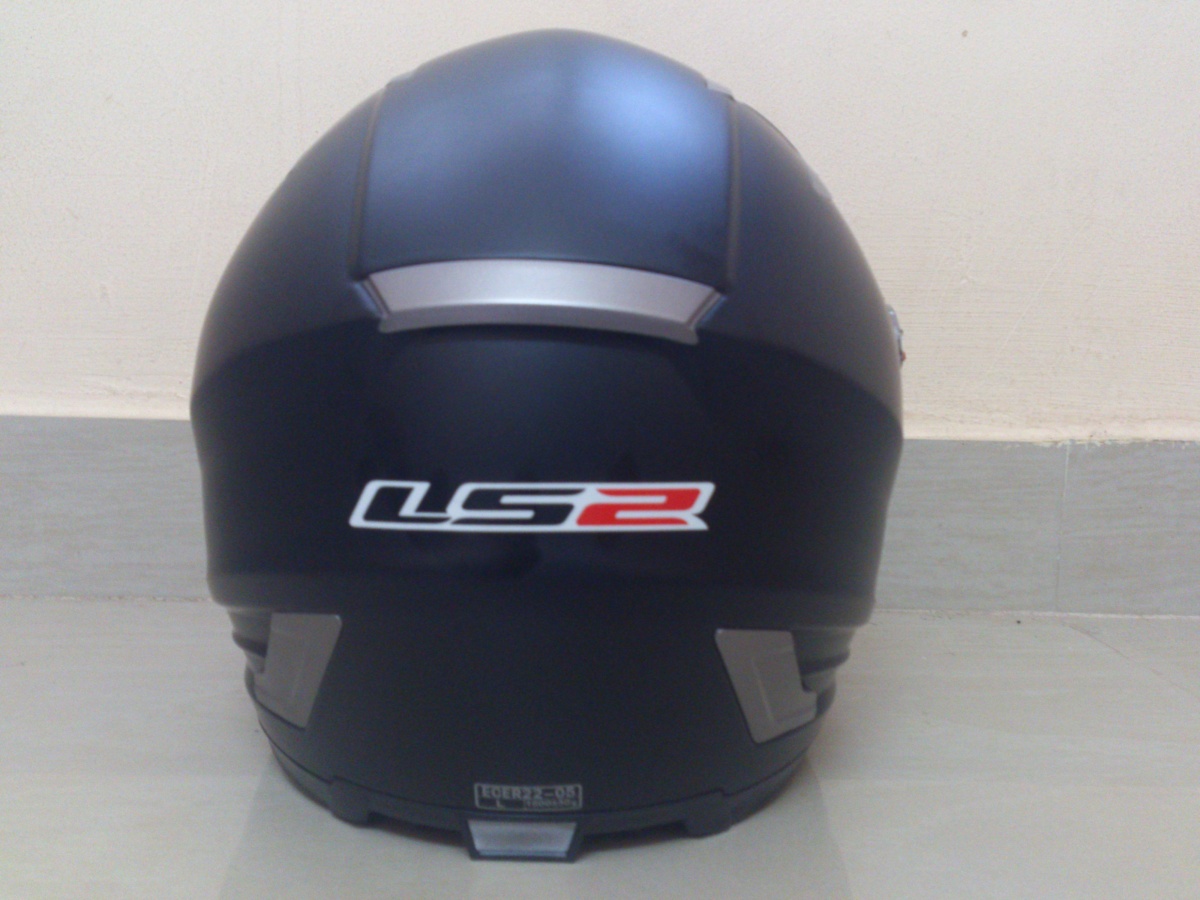 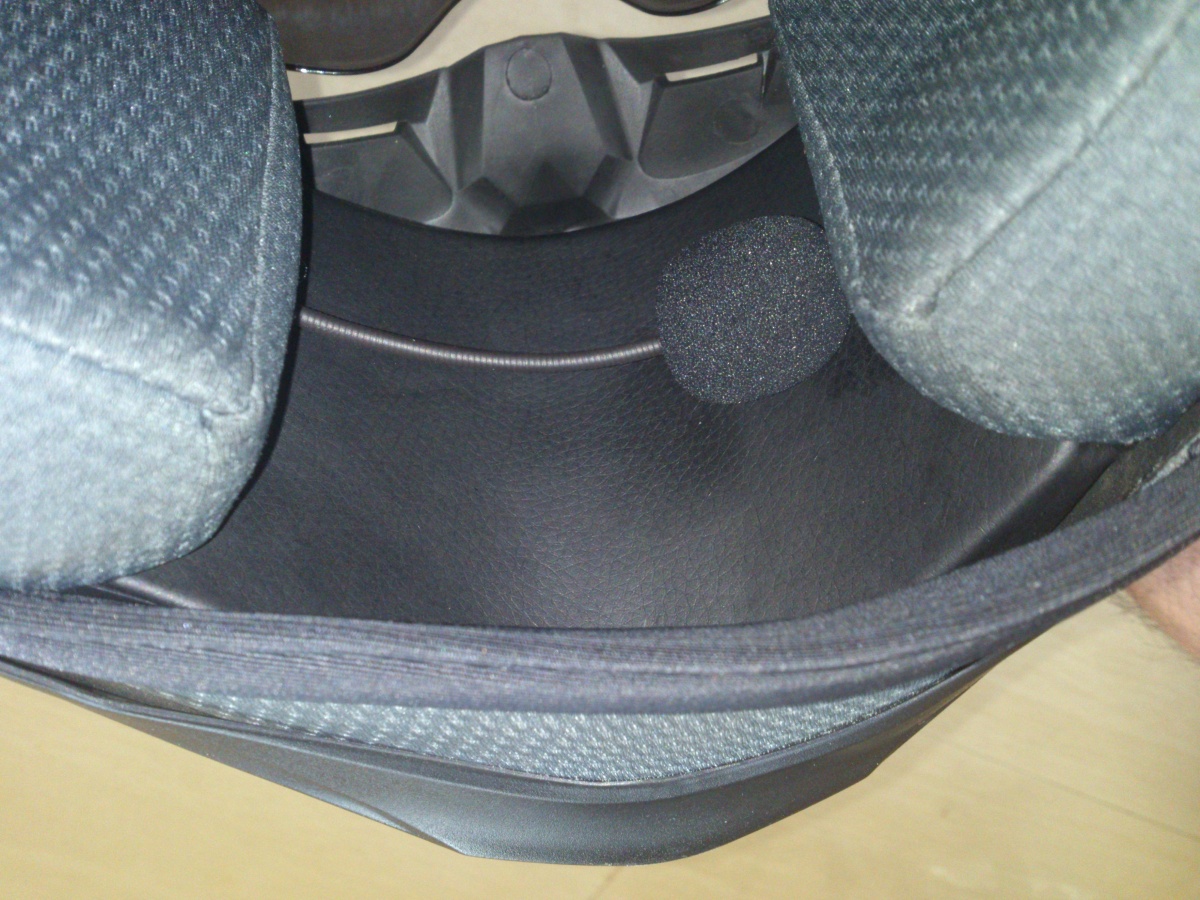 Speaker, it is beneath padding. To take pic I have removed the padding 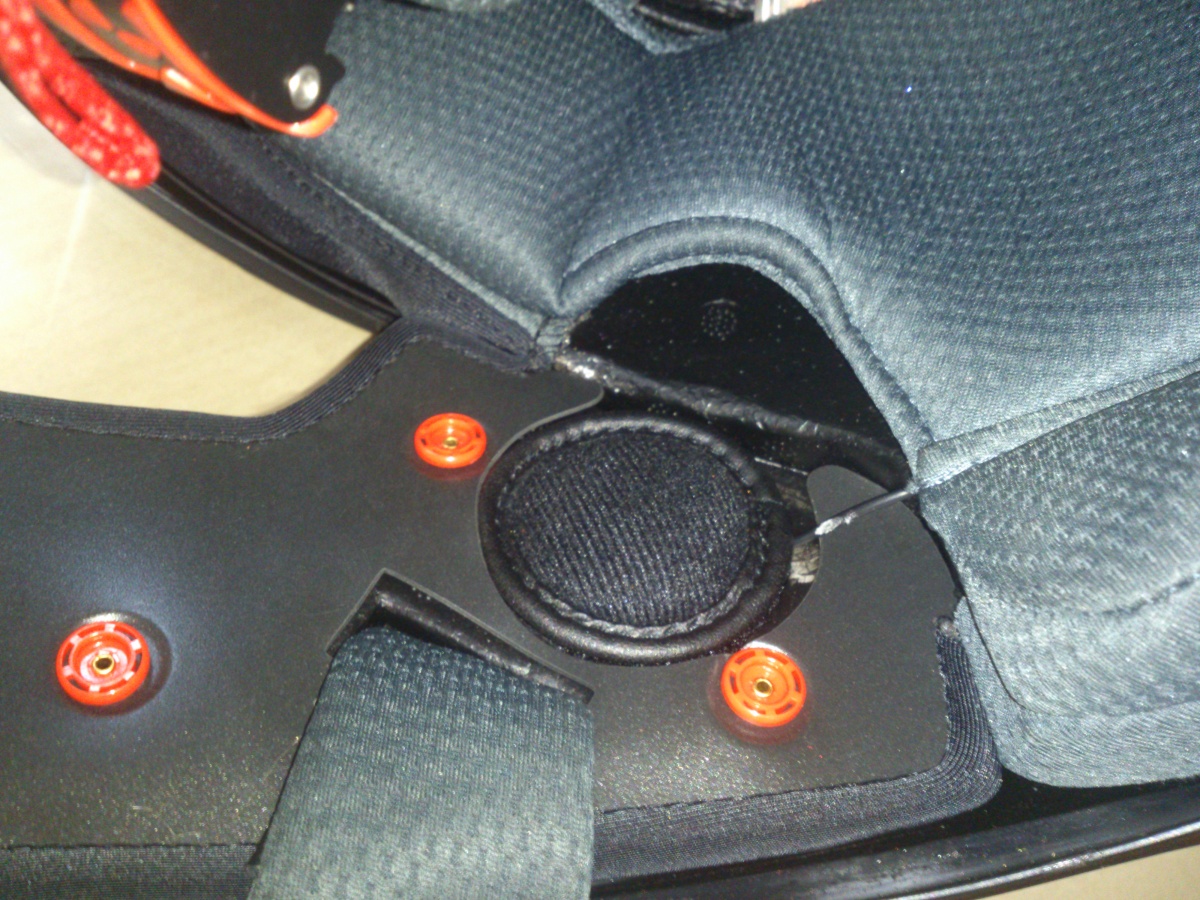 Few more points which I noticed
Bluetooth battery is not replaceable, in fact the whole unit is stick to the helmet shell.

Yes, Bluetooth requires charging and it usually takes around 2 hours to charge fully.

In case battery is about to discharge completely then there is a beep which start coming after every 10-15 sec. Once it start beeping battery last for around 1 - 1.5 hours with music played at moderate volume.

Wow good review, in fact i was looking for a helmet myself. I think this is exactly what i wanted to have in a helmet. The only thing is the price... Also wud like to know if u wear balaclava beforw helmet? How would you say the durability n reliability ia?

Shivanshu said:
Wow good review, in fact i was looking for a helmet myself. I think this is exactly what i wanted to have in a helmet. The only thing is the price... Also wud like to know if u wear balaclava beforw helmet? How would you say the durability n reliability ia?
Click to expand...

Thanks [MENTION=5620]Shivanshu[/MENTION] for the appreciation.

I don't wear balaclava, but I do wear a head wrap before helmet.
I have been using this helmet daily since March 2014. I very satisfied with the kind of comfort and safety I feel after wearing this helmet.

There are many seller who sell fake LS2 helmet. So we have take utmost care before buying the helmet. You can few details at LS2 Helmets India - Genuine or Fake ..??
C

Thank you [MENTION=24761]KJa[/MENTION] for the appreciation.

A few questions
Have you tested the helmet on long rides? (And the rider-rider communication)
And how do you recharge the battery? USB cable?
If the battery fails will the dealer replace it?

A few questions
Have you tested the helmet on long rides? (And the rider-rider communication)
And how do you recharge the battery? USB cable?
If the battery fails will the dealer replace it?

Yes, I have tested the helmet on long ride. I with fellow riders went to Velneshwar from Bangalore. During which we were riding for around 24 hours. The battery lasted for around 23 hours. I have not tested the rider-rider communication till now. But in near future will test it and update the review.

Got the charger with helmet, use that to charge.

Dealer have said that usually there is no problem w.r.t. battery and he will replace it. But i doubt his words as the unit which enclose battery and other circuits, is closed and is stick to helmet using adhesive.

Nice comprehensive review. I did consider this helmet when I was looking for one but decided against it due to cost and also the black color. Went ahead and bought LS2-FF386 instead in red
C

amitw79 said:
Nice comprehensive review. I did consider this helmet when I was looking for one but decided against it due to cost and also the black color. Went ahead and bought LS2-FF386 instead in red
Click to expand...

UI-UX expert who loves to ride

Got this helmet yesterday. Found it bit tight to wear but the seller said that the foam will take its shape after some use. The sound quality is good thus making the ride enjoyable. Just a quick question, can we record our sound for a vlog on the run to the Sound recorder app in a phone using the inbuilt mic? I tested it on the FF318 model, but it didnt worked. I will check the same at my end at some time.
You must log in or register to reply here.
Share:
Facebook Twitter Reddit Pinterest WhatsApp Email
Top