Looking at a window of opportunity to execute another one of my mission spreadsheets, I completed a self-drive trip through Kumaon (UK) during May 2016. Skipping the teasers, I am starting with the log straight away:

After our successful Lansdowne Trip in Sep 2015, I had felt increasingly confident of undertaking longer drives with my toddlers and that too in the mountains. In March, I had announced in advance to my wife that we would head to the Dhauladhar Circuit in May but that decision changed due to the first-hand information about heavy traffic in McLeodganj from my family who travelled there after Holi.

I moved my focus, then, to Chakrata and Mori however after deep thoughts I finalized Kumaon Lower. After all, I had an itinerary spreadsheet to move from the folder "Pending" to "Checked".

Before departure, there was a minor tiff between me and my better half over whether the journey would be comfortable or not considering the kind of properties these places might have. Despite being on the brink of cancellation, the trip came back to life and in fact got advanced by a day. Learning from my past experiences, I took the second half of the day before drive in an easy manner relaxing and sleeping at home, helping in packing as well. It was a Go!

As per our target, we woke up by 02:45 and got ready by 03:45. I had already removed the kitchen-work from the things to do before departure and that, in retrospect, saved a good 30 minutes in my opinion. Taking blessings from our parents, we drove out of the gate at 04:15 and took the Pul Bangash - Tis Hazari shortcut to the GT Road (East). As I took through Ghaziabad, I encountered the usual problem on NH-24 i.e. to go to the east-ward side of NH-24, either take a long U-Turn or drive on the wrong side. To avoid the risk of oncoming headlight-blaring traffic, I took the former option.

Crossing Gajraula quite early, we made our first usual stop at Apni Haveli just after Moradabad Bypass ordering a serving of Chhola Bhatura and Aloo Parantha each. Meanwhile, I got busy washing my car with the unlimited water supply that the pump was sourcing from beneath the earth for which I got generous help as well. 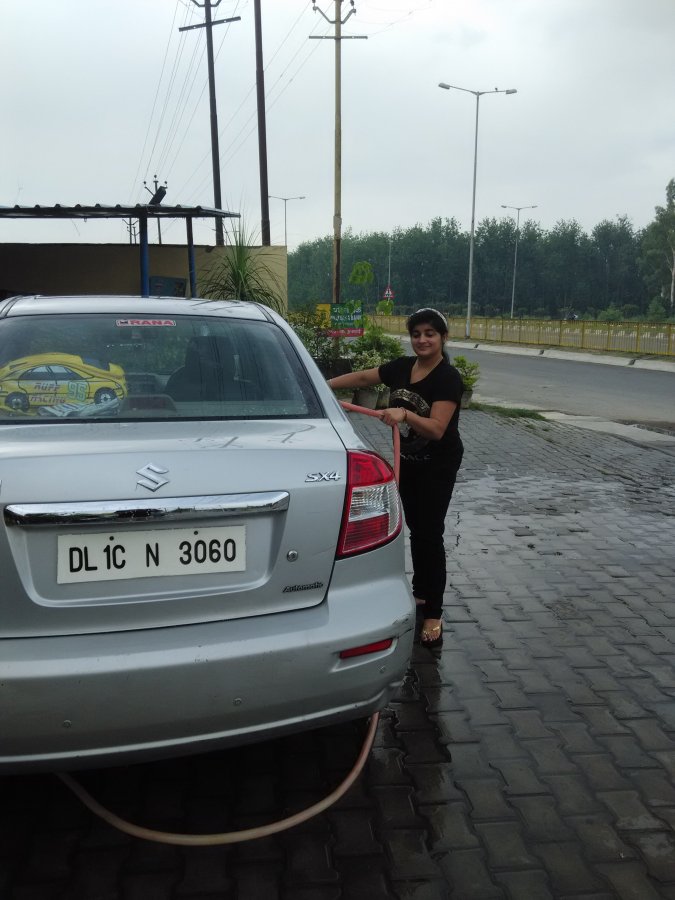 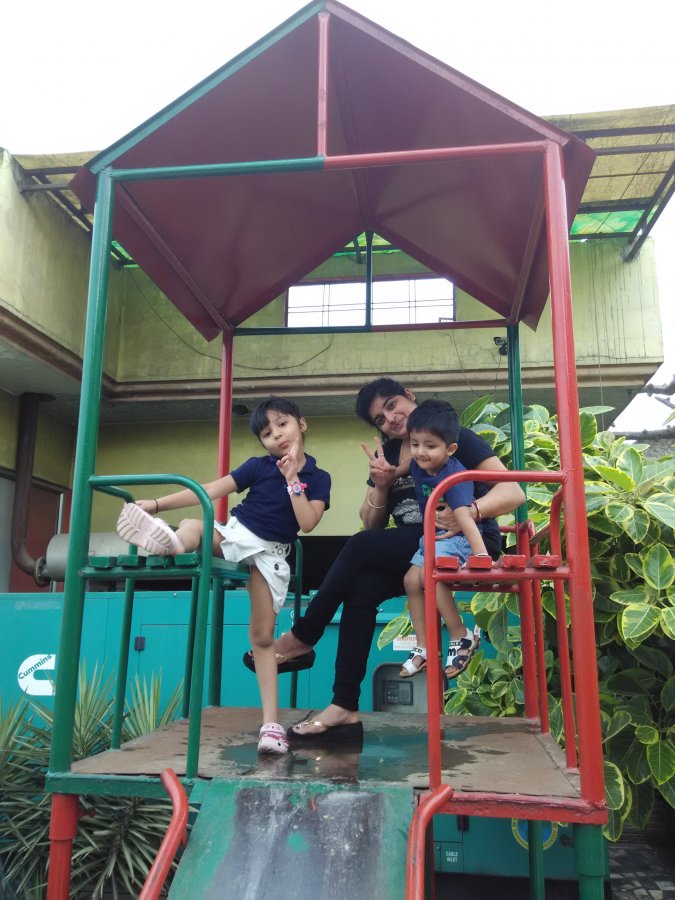 Apni Haveli suits us quite well because its food is delicious, reasonable and the place offers running space for the kids along with some nice swings and slides. Driving on, I passed a village called "Ahmadabad" when I realized that I must have missed the left for Kathgodam at the grand interchange and was confirmed by a motor-biker soon after. Albeit, the U-turn cost me 24 kms in total with 20 minutes, it felt good to finally drive on the right way. Surprisingly the road after that felt quite narrow at certain places and was blocked with traffic even this early in the morning. 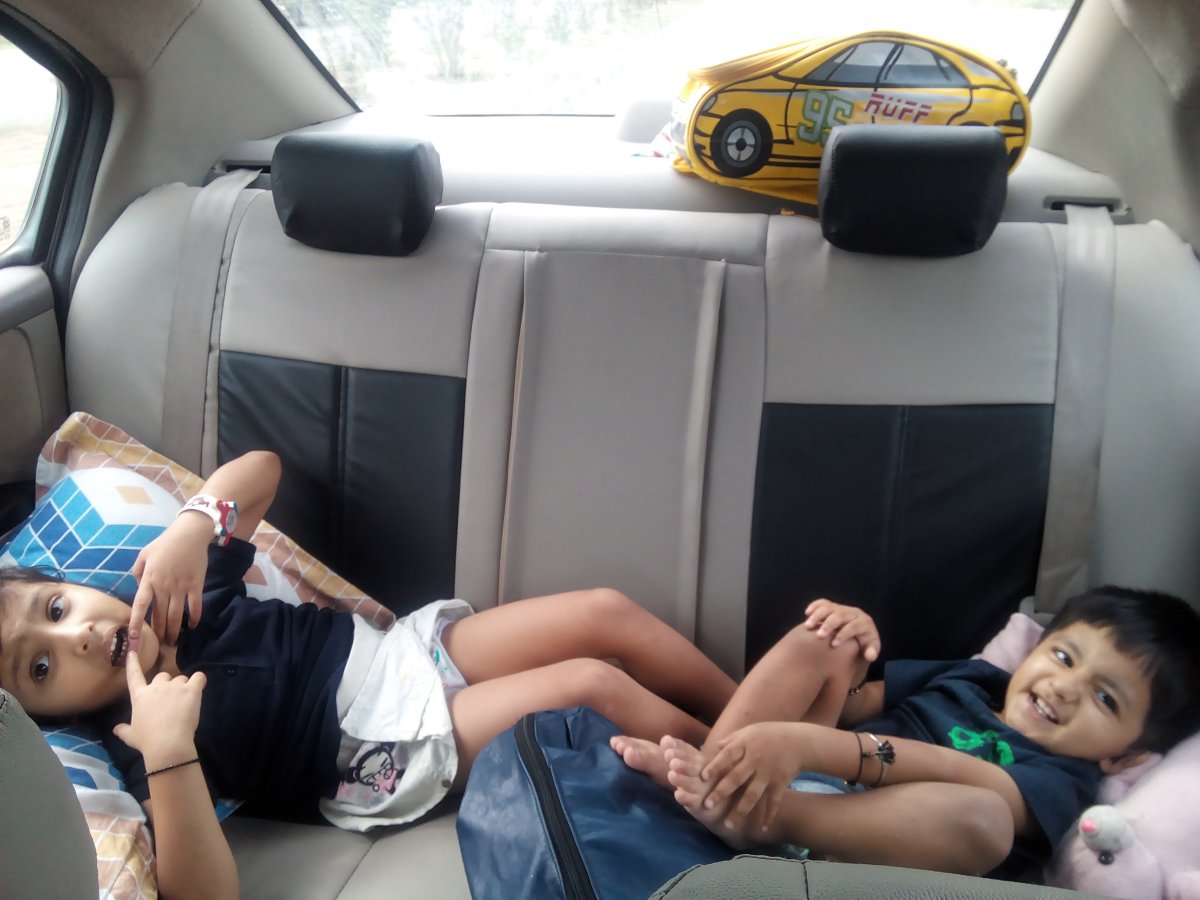 Soon, we passed Rampur followed by Rudrapur and Haldwani. I carefully noted where the connecting link from Kaladhungi joined from the left. As soon as we crossed Bhowali, the traffic thinned which, in particular, reminded me of petrol. When I asked a local taxi about it, he confirmed that a Petrol Pump could be find either back in Bhowali or on the way towards Almora. The kids were sleeping and stopping the car meant their wakefulness in complete fullness which might mar my comfort and speed in driving, hence I decided to let go. 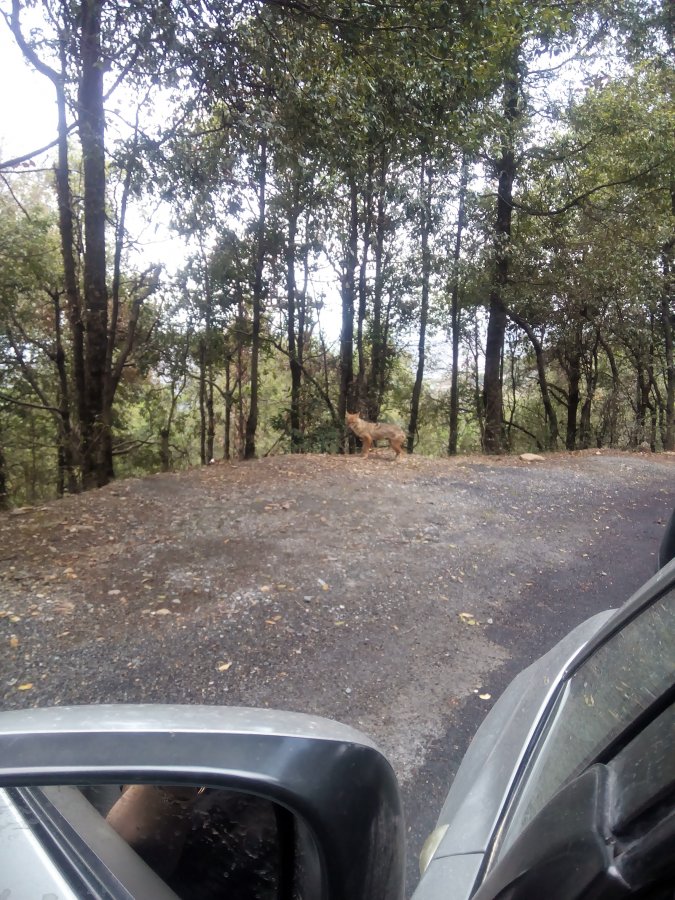 Spotted after Bhowali - A fox or a jackal? Please confirm

I had already been told by Mr Vivek Sharma that his lodge is right after Bhatelia and as explained, we pulled over inside the lodge at sharp 12:15 (8 hours after we drove out of our house); where we were warmly welcomed by Manju Aunty asking us to select any of the 3 available rooms along with sumptuous Lunch. After relaxing a bit in the room, we quickly proceeded for Lunch in their dining hall which was done up with a nice taste of decor. The courtyard or balcony outside the rooms was an excellent place to sit and soak up the atmosphere with multiple hues of flowers in half bloom. 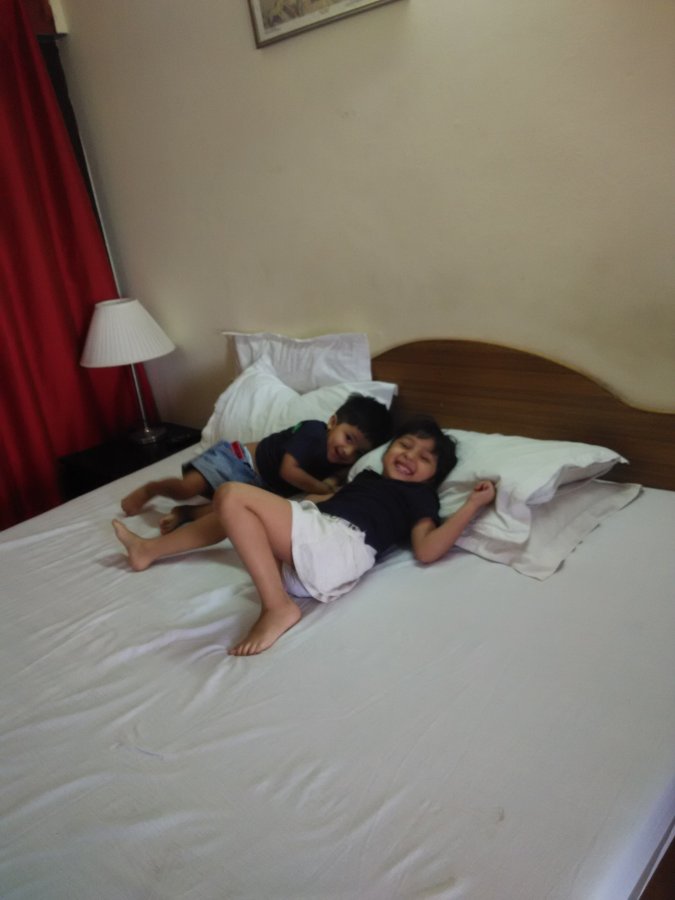 Relaxing in the Room 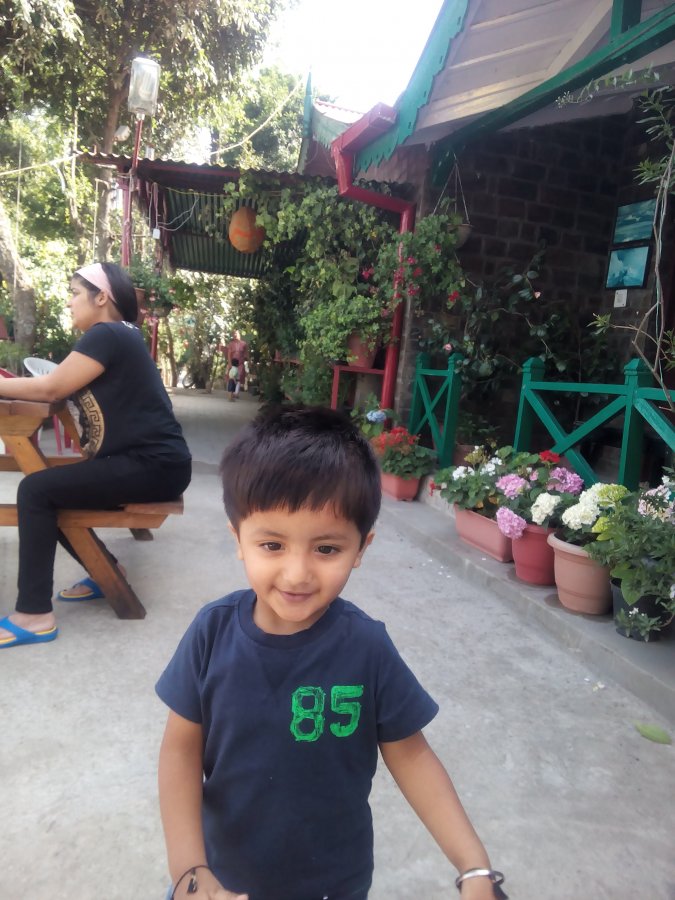 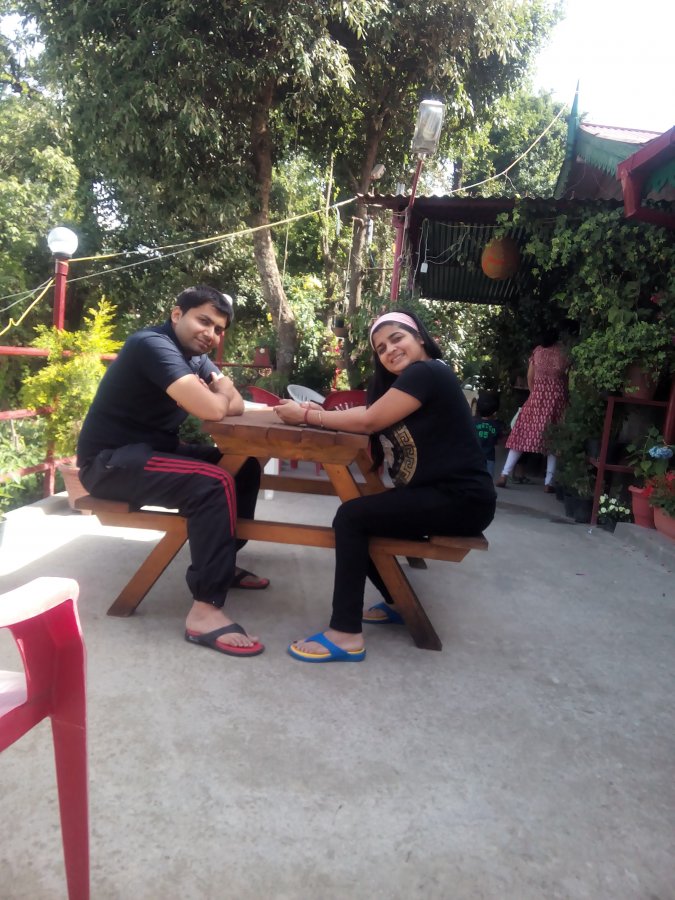 Wooden benches in the Courtyard 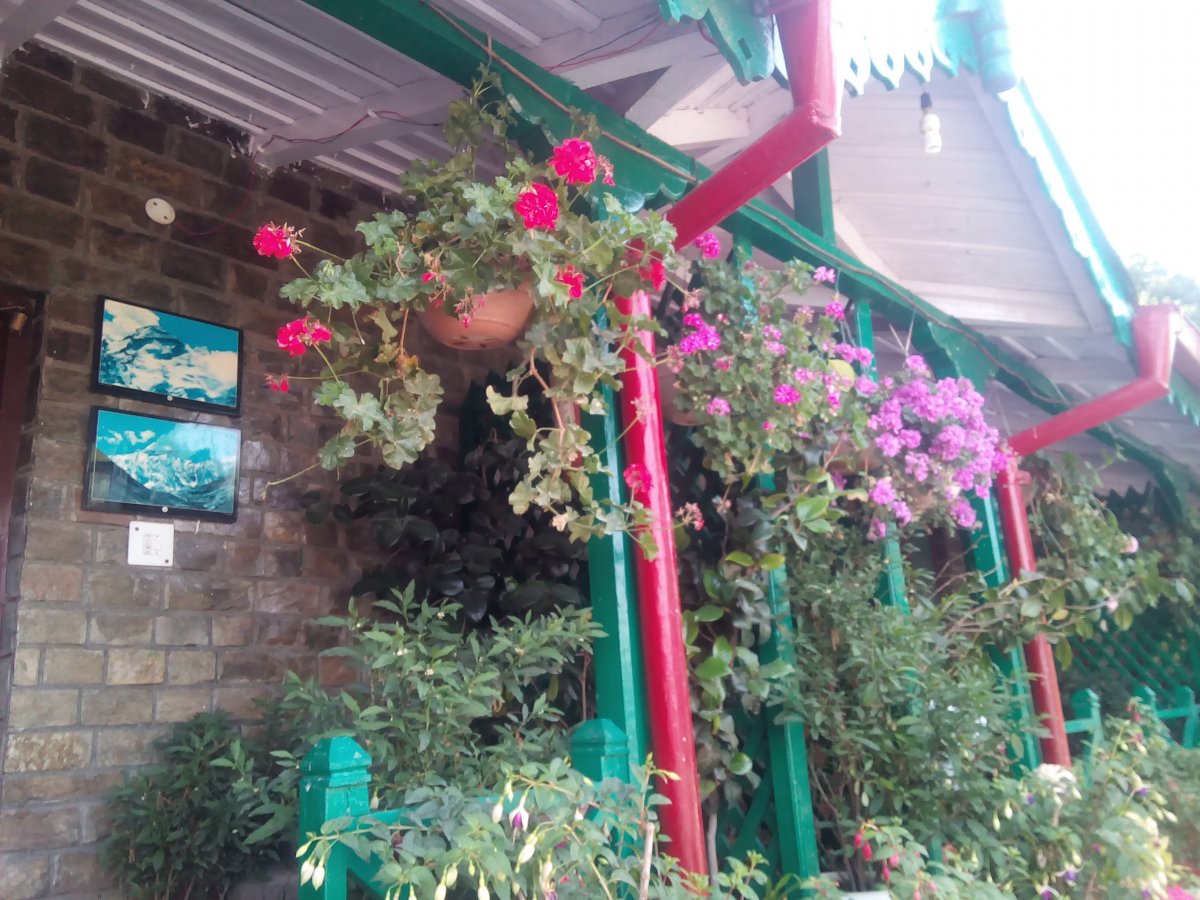 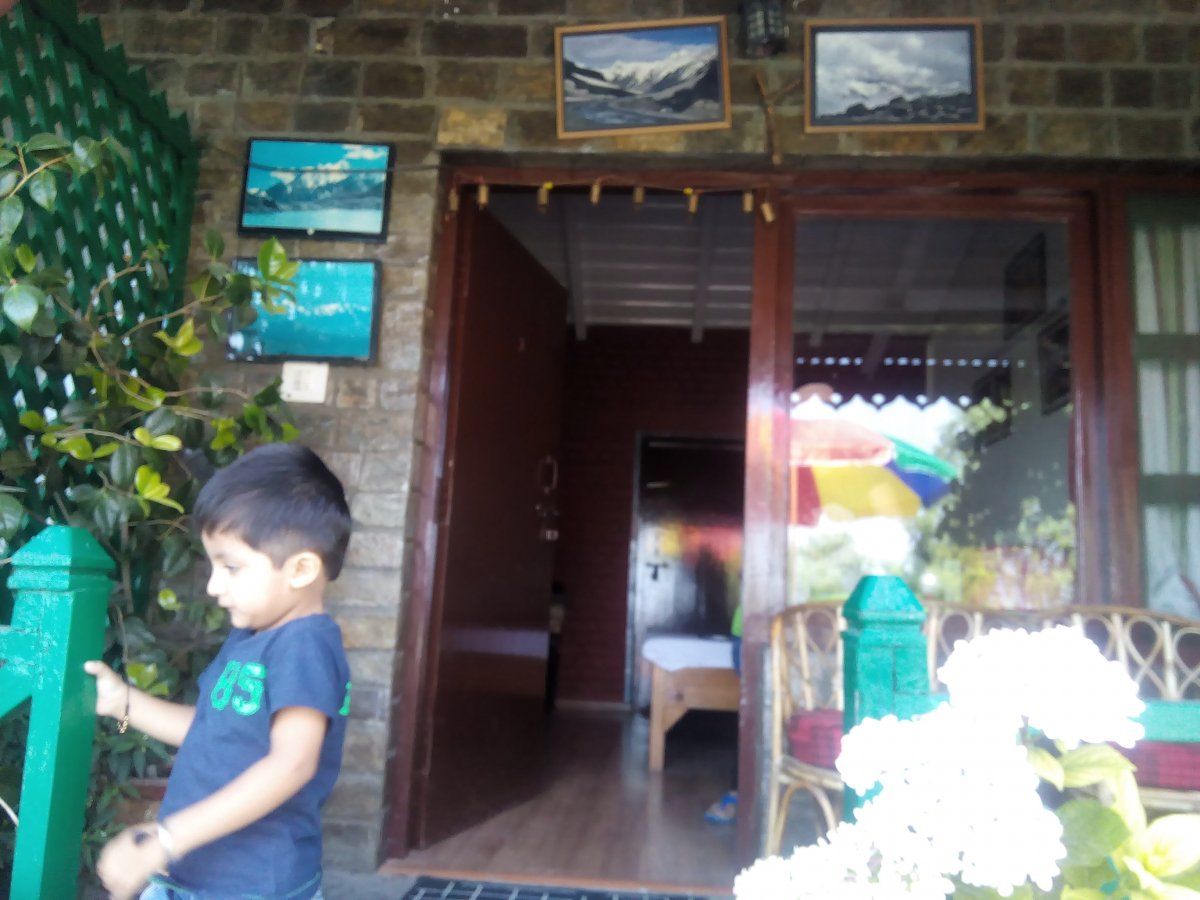 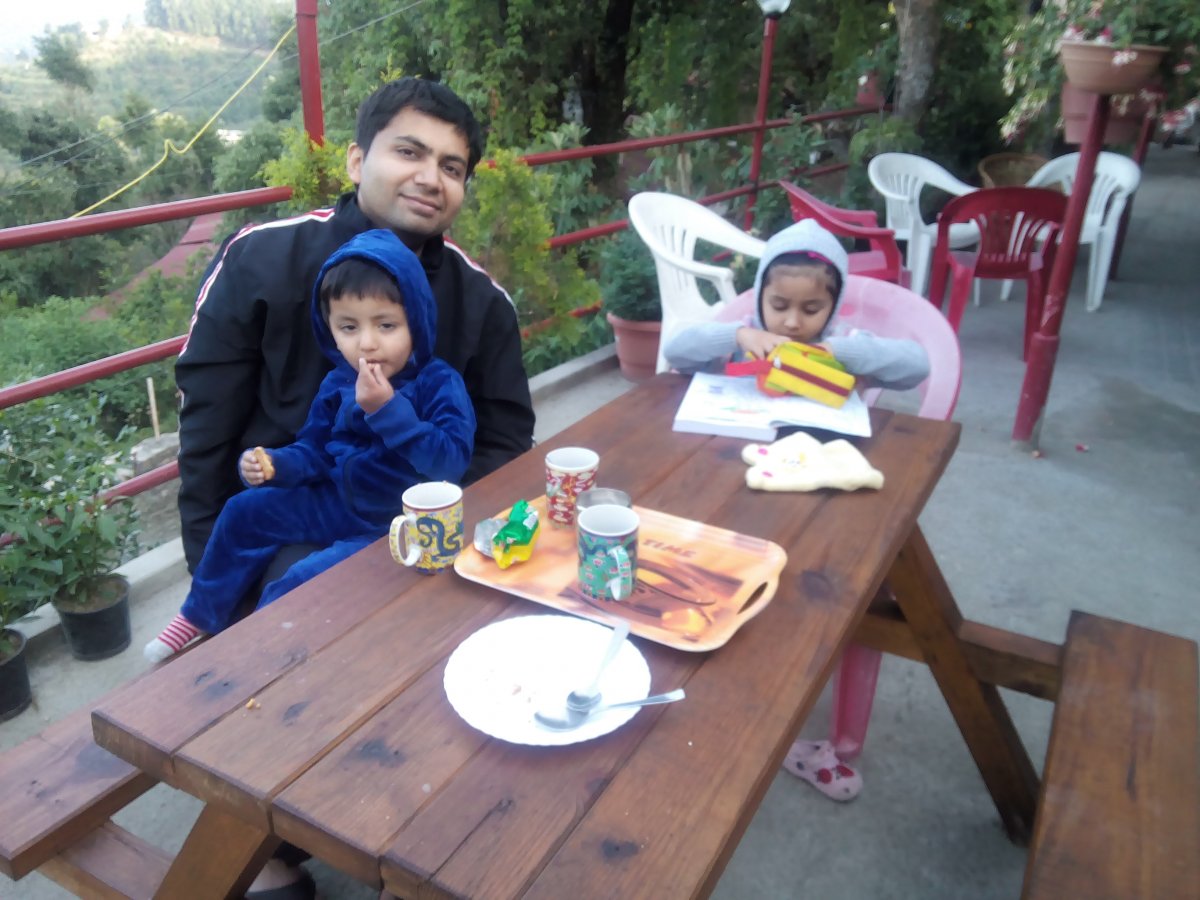 High-Tea Spread outside our Room

Staff member
Some travelogues are made totally by the tiny tots! Too much of a distraction!

Today was a no-target day and after having breakfast, we kept on loitering around the resort itself. After visiting Mountain Trail and other new properties beside our place, we realized that we were staying at the best value-for-money property in the area. On discussing my possible petrol issue with Vivekji the day before, he had promptly ordered his contractor to get 2L from Haldwani today which reached me by 12 PM. On his advise, we immediately left for Chauli Ki Jali and after completing the small trek, we visited the Goat Farm on the way back. Initially, the guard kept up his typical tantrums of security issue and limited access but on my polite request and reference of Manju Aunty and Vivekji, he immediately volunteered to show around till the main door only. We clicked pictures of few pashmina goats (males and females were kept in different sheds) and also saw few affects of the research and experimentation processes on the helpless goats. 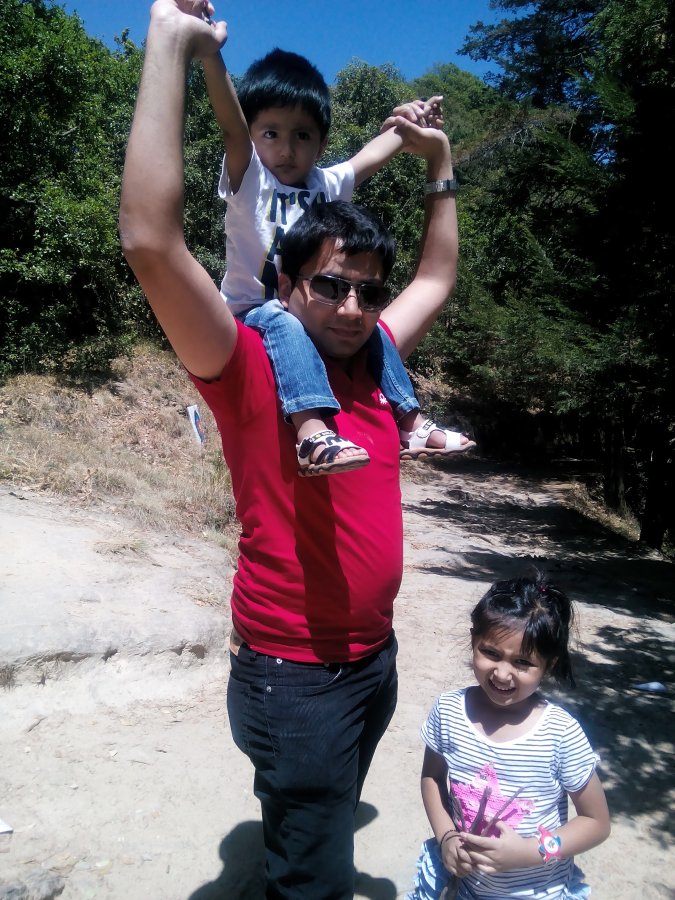 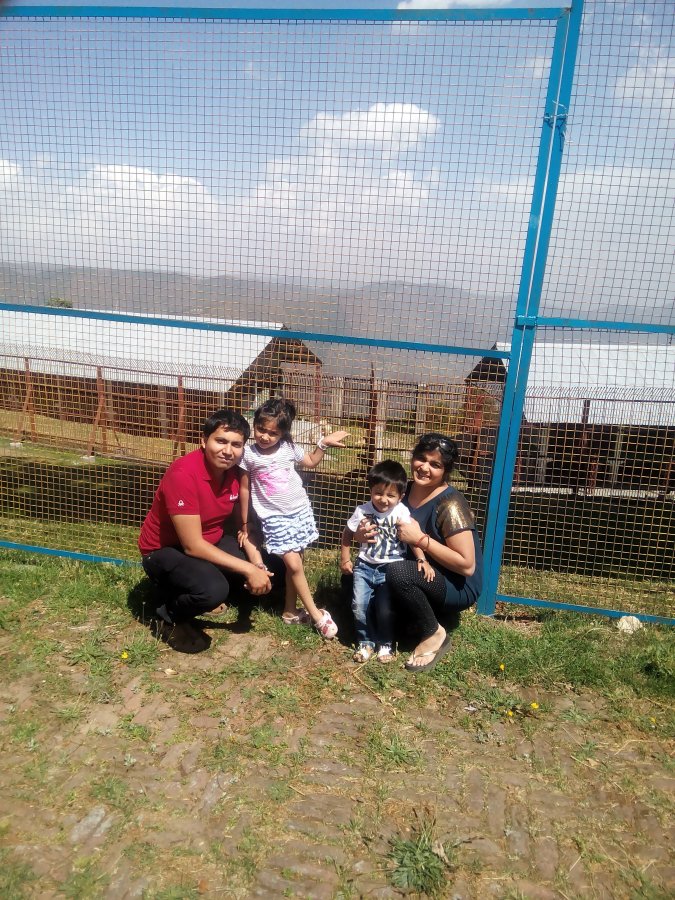 After a relaxing and hearty lunch, we slept in the room to get ready for the dusk forest drive by Vivekji himself into the Sitla Forest Reserve. On the way, he showed us a family of foxes down below on a rock which got alert as soon as we looked down upon them. We kept on discussing how he had encountered leopards frequently on that road apart from making observations of the burnt forest. Fortunately or unfortunately, we could not spot a leopard and returned back to our base. 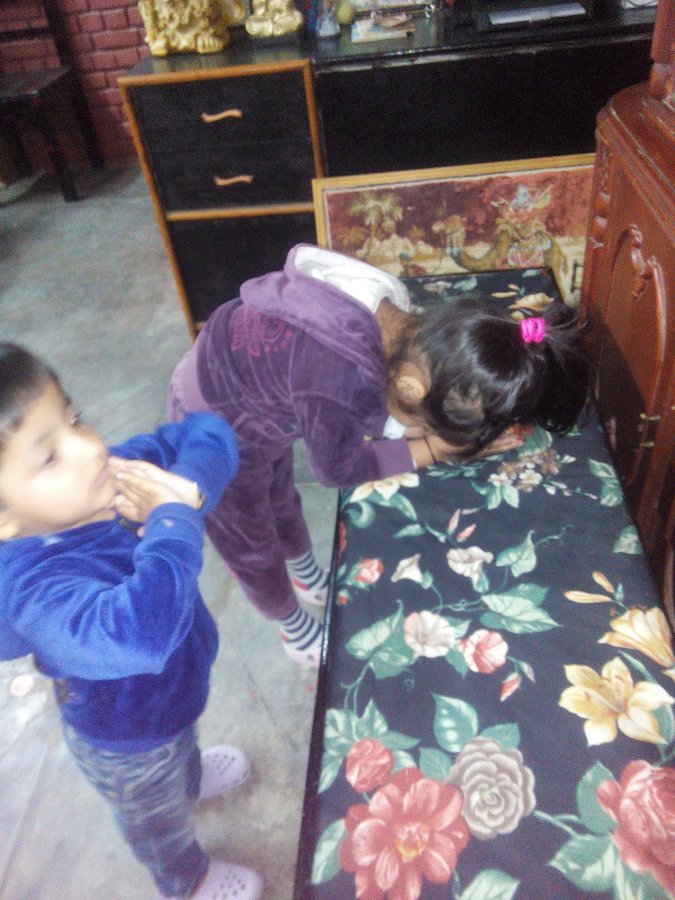 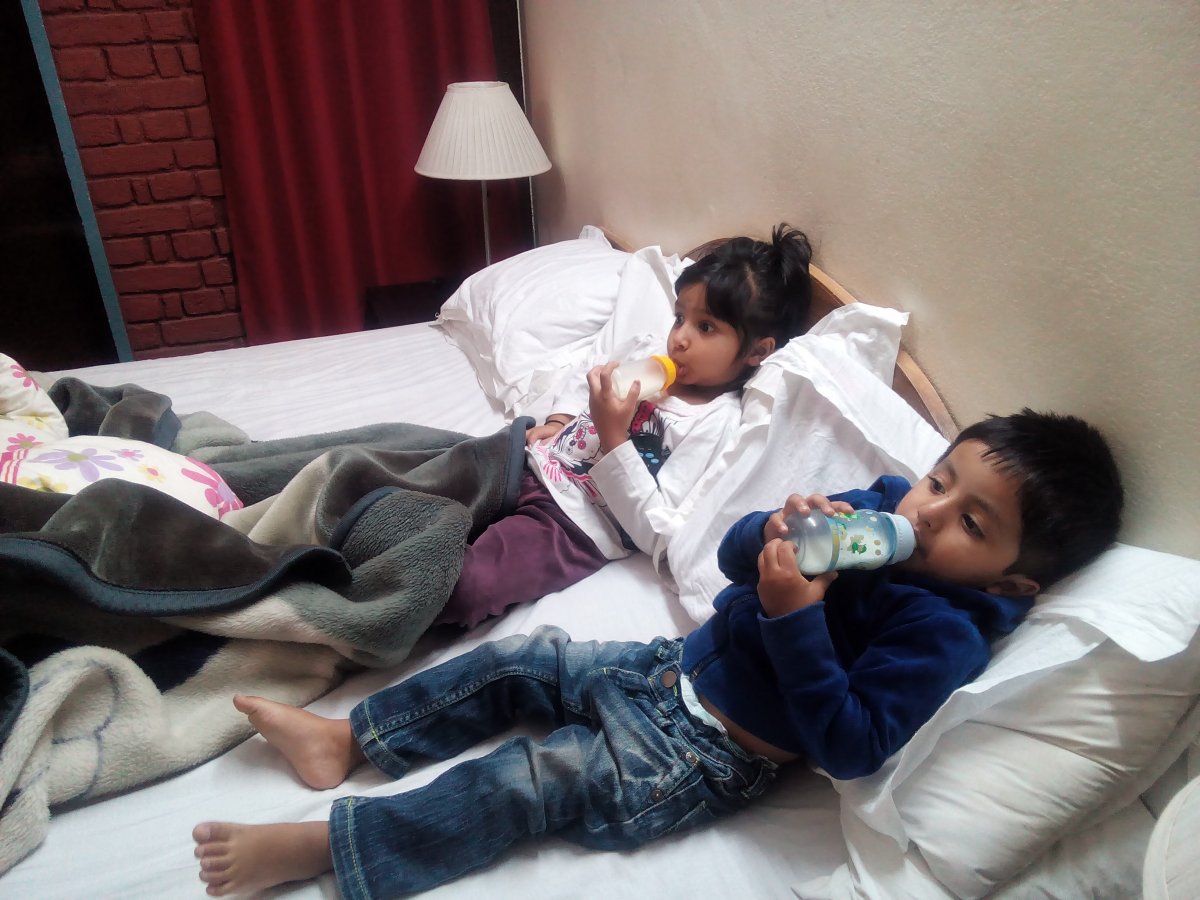