Lost and found in Ladakh! 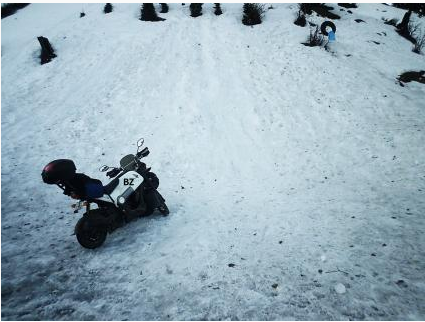 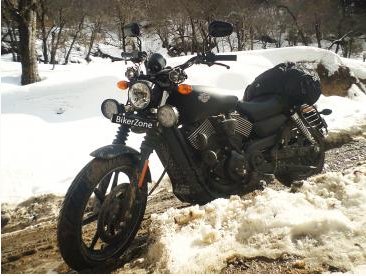 Looking forward to the main course .

one of my favourite place Jalori Pass .....waiting more....

Wow seriously, a mixture of motorcycles and in such adverse conditions would be good @PrashantBhardwaj , eagerly waiting for the detailed log.

catch me if you can

Lost and found in Ladakh!

To the un-initiated, we at BikerZone organize group rides every now and then. Though the members do their individual rides as well, the motive of these Group Rides, which we have termed as Mega Rides, had always been to do something different and unique as a group, which we may or may not plan to do as an individual. This time as well we planned to do something different than the regular riding groups.

So here goes the complete story…

Prologue:
A group of 3 riders started in the after office hours of Delhi to reach Chandigarh way into the night. The plan was to start early from Chandigarh so that the riders can get used to each other’s style of riding. This was the most diverse group we have ever had with rides varying from 750 CCs to a mere 100 CC. But that was the beauty of it all.. Despite the diversity, we rode as a single group. 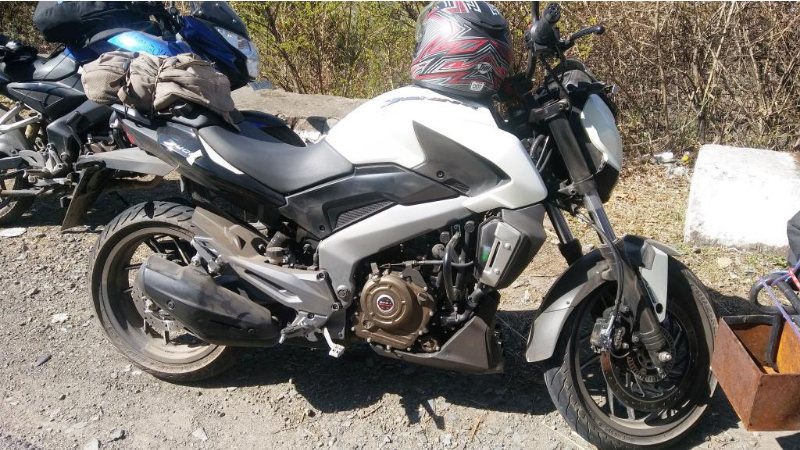 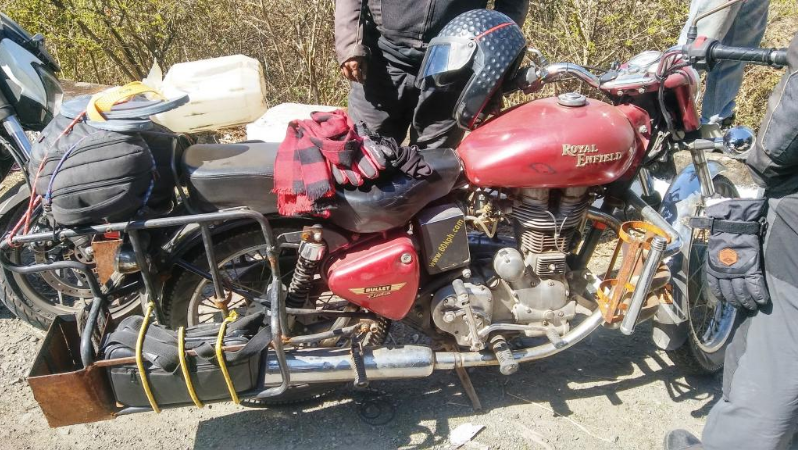 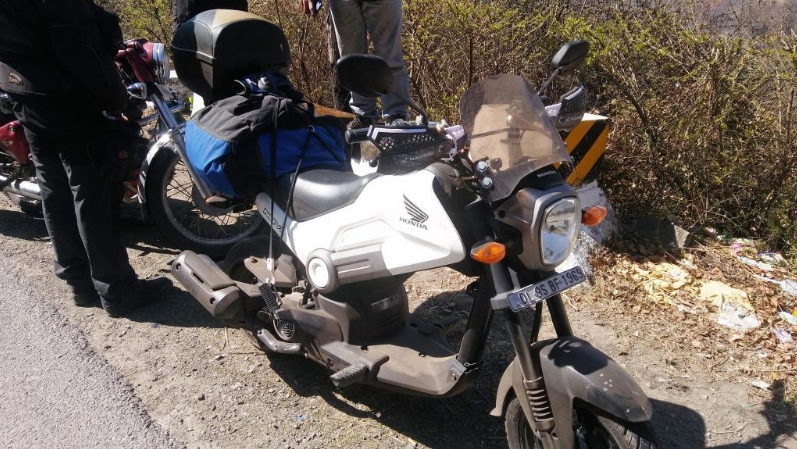 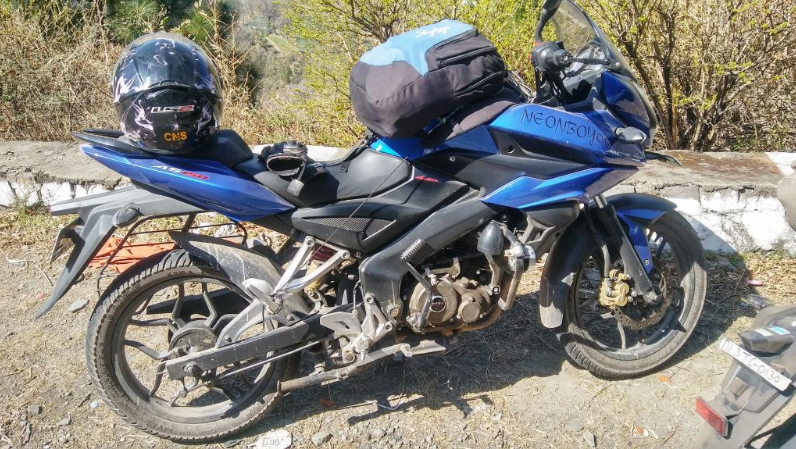 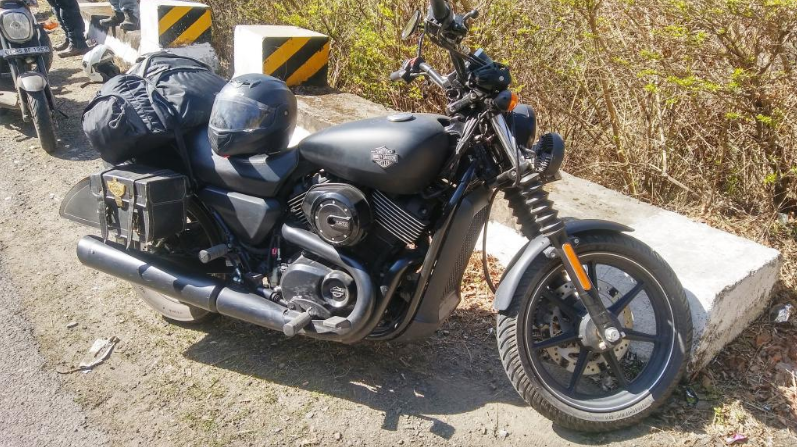 Day 1: Chandigarh – Shimla – Narkanda (165 KMs)
We started bit late at 8:30 AM from Panchkula as the guys who rode through the night from Delhi to experience the real adventure were dreaming about the ride to be late into the morning. But that did not bother us as we have ridden through majestic NH-22 many a times and the experienced rider each of them were, they knew the highway like they knew their machines. We rode through it to reach Narkanda by 4 PM in the evening. Owing to Shivratri, the town was completely empty, devoid of a single soul. The only time we have seen Narkanda like this was when we reached there at 3:00 A.M. in the morning. This got us a bit worried as we intended to stay here for the day. We enquired around a bit and after 1 hour of it, we finally managed to get a decent hotel at a much more decent price. Checked-in to hotel and next phase of team bonding started, over the good ol’ Old Monk that is.. Soon we started the bakar sessions and only dozed off once the Old Monk was no more to be found. 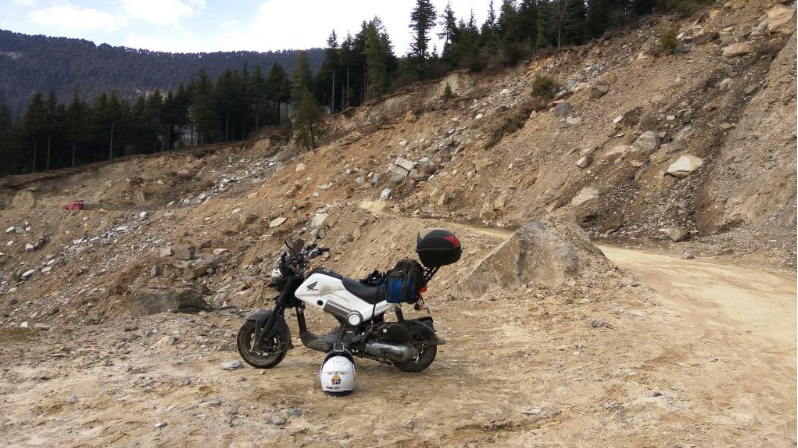 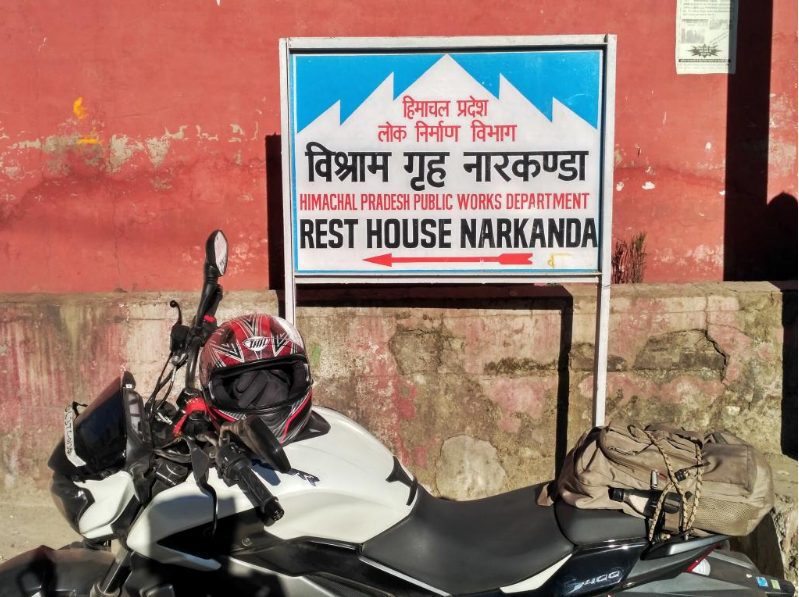 Day 2: Narkanda – Hatu – Kingal – Ani – Khanag - Jalori
This day was important to us as a group. There were two riders who wanted to see what their steeds were capable of, one rider who was getting to know his ride with each KM passing and one who was there to know what it takes to ride to them treacherous passes.. And then, there was me, on my trusted Red Bull. The energy was high and everyone woke up at around 6 in the morning. Sun came up later than we did and by the time it did, we were already on the road, heading to the peak which has one of the best inclines we have ridden on. Oh, and to add to that, the inclines will have black ice and snow all over the road. 2 KMs on the road to Hatu, we came across first patch of Black ice and every one crossed it with style. Once we realized that we are among the company of sane men, we moved forward and crossed many black ice patches till we reached the patch which a few could not cross. Red bull went first and crossed the patch. Since we have been together for time immemorial, we know the potential of each other. Next was Navi to try but it could not make it. Pulsar AS 150 tried and resulted in skidding and so did the Harley. The rider on Dominar, being the lame rider he is, did not even try and we returned from that point to Narkanda, where we refueled and moved on to Kingal and then to Sainj from where we turned left on to Luhri and then to Ani. Surprisingly, the road to Ani was all smooth unlike the last time we were there. To be more precise, the road was all tarmac 7 KMs before Khanag and then there was all mud till around 1 KM before Khanag. Post that, real fun began. The main point of contention here was Navi. Due to its low power and small tires, it was difficult to ride it up on one of the passes with steepest incline but then, we at BikerZone always believe that it is the rider that matters and not the ride. The rider on Navi has some great numbers of experiences on the saddle and he put every second of it on the throttle to navigate through those slippery slopes. Harley was having its own fare share due to low ground clearance and those uneven roads coupled with rocks and slush was no easy feat for Harley as well. Stumbling but strong we finally reached the Jalori top but the team was still hungry for more. They wanted to further test their steeds. Now whoever has been to Jalori knows that the ascend from Shoja side is steeper than ascend from Khanag side and so, to test our motorcycles we started descending towards Shoja side, hoping that atleast the descend will be easy. HOPING.
The black ice on the road was making it difficult for the motorcycles and the rides. The front not stable on the road and rear not having enough traction. To add to it, there were vehicles coming from opposite side, which sometimes meant to navigate to side of the road swiftly which was sometimes easy and sometimes not. Navi in this department was easy however Harley was having some tough time doing that due to the sheer weight of the motorcycle. However, we descended a few of KMs down the road till the point where a pick-up was stuck coming up in our opposite direction and had major part of the road to itself. Even the Navi did not have enough clearance to go through and we turned from this point. Climb up was no easy task for the Navi. The tires were slipping and sometimes getting stuck in black ice. The snowfall also happened in the meantime to keep things in perspective. We pushed the bike, sometimes the rider walked along the bike and sometimes we slipped but somehow we made the ascent back to the top. We finally found what we came looking for. I believe more than anything else, it was the trust in our steeds we were looking for. There was a distinct smile on every face when they looked back at their motorcycles. The bond was made.

Despite the fact that the objective was achieved, we were still around 250 KMs away from Chandigarh and more than 500 KMs for the folks coming from Delhi and we had to make sure that the return journey remains interesting as well. We rode back towards Ani and then to Khanag from where we turned right instead of left. This road curves along the Sutlej river and is a mix of off road and tarmac. We reached Chaba where we intended to stay for the night but could not find a suitable place so we moved on to Sunni and then to Tattapani where we got a very decent hotel at very affordable price. It has been a great day for the riders and we celebrated it with the same excitement, Old Monk to the rescue again. The party went late into the night and we all slept with a smile on our faces. 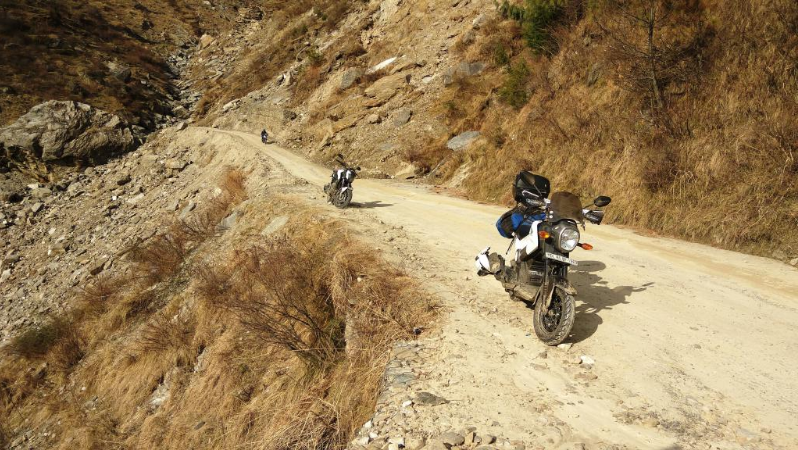 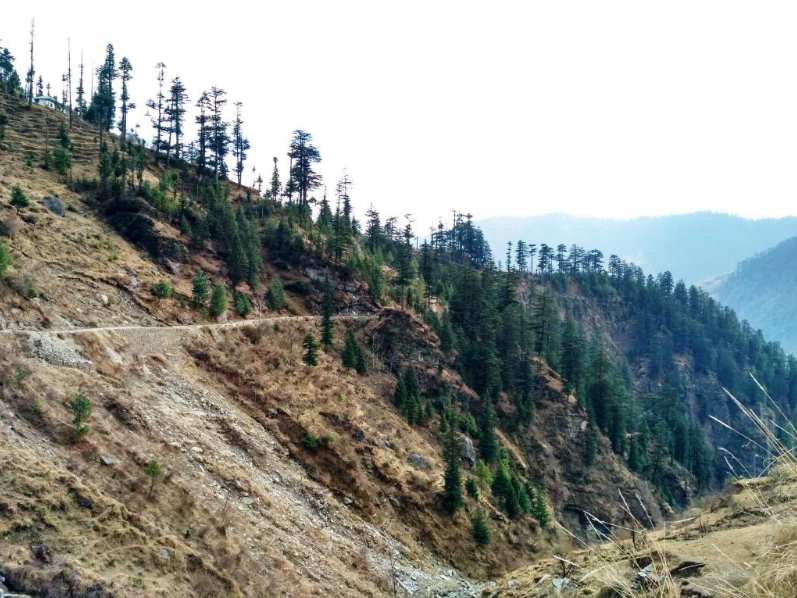 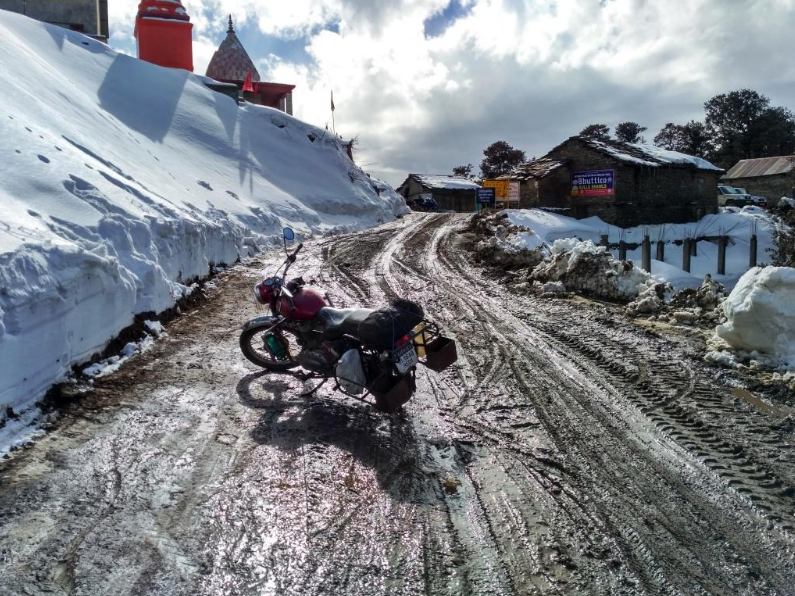 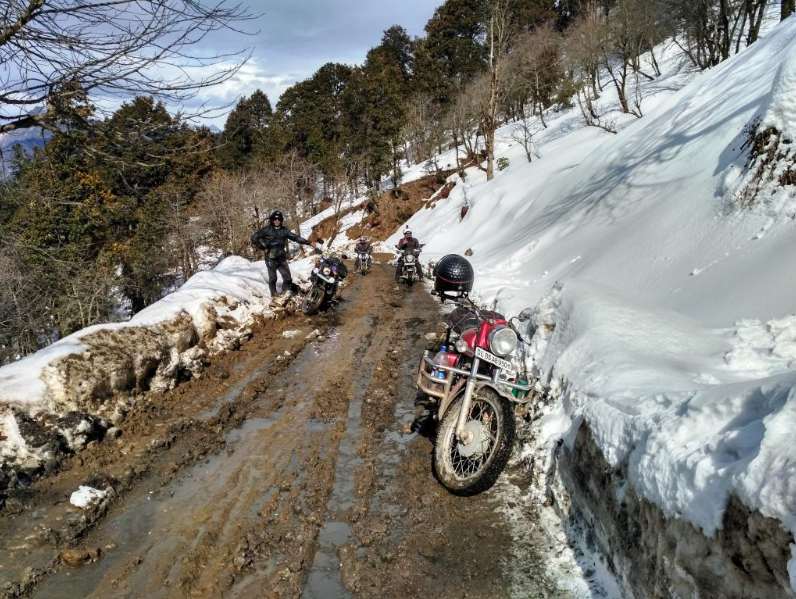 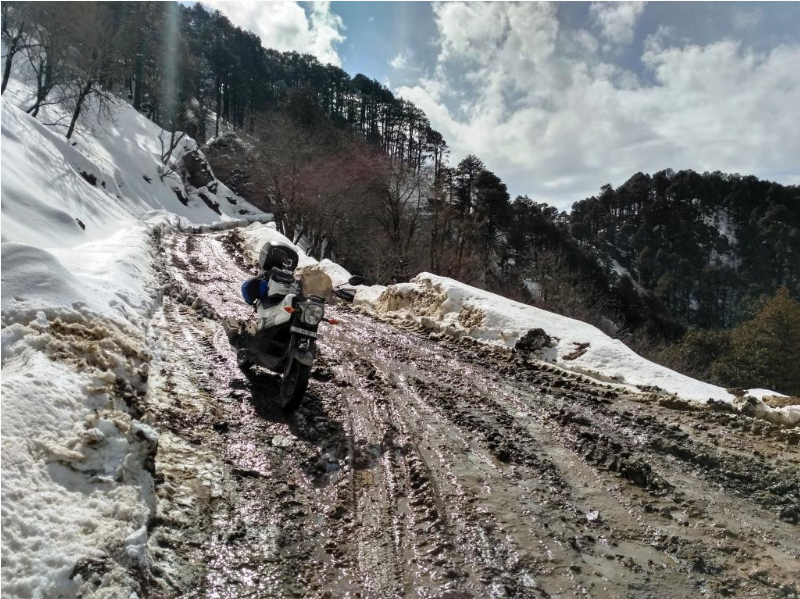 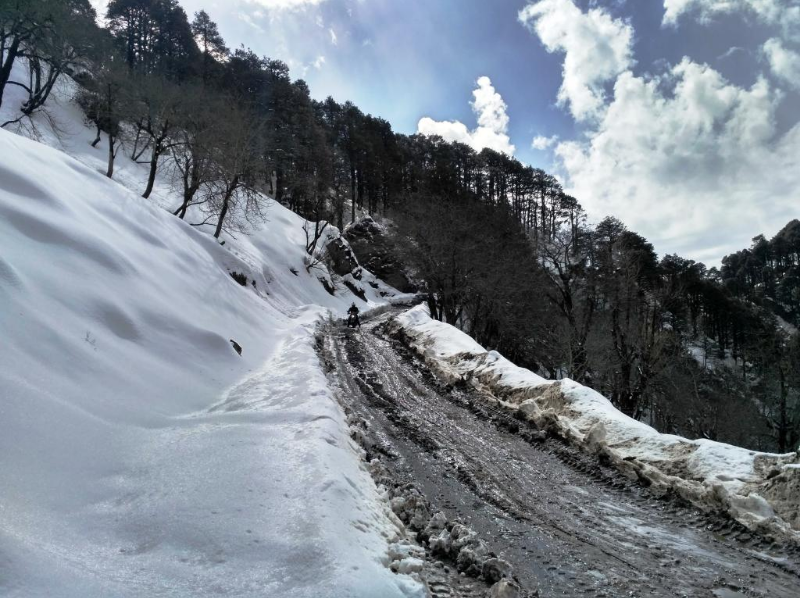 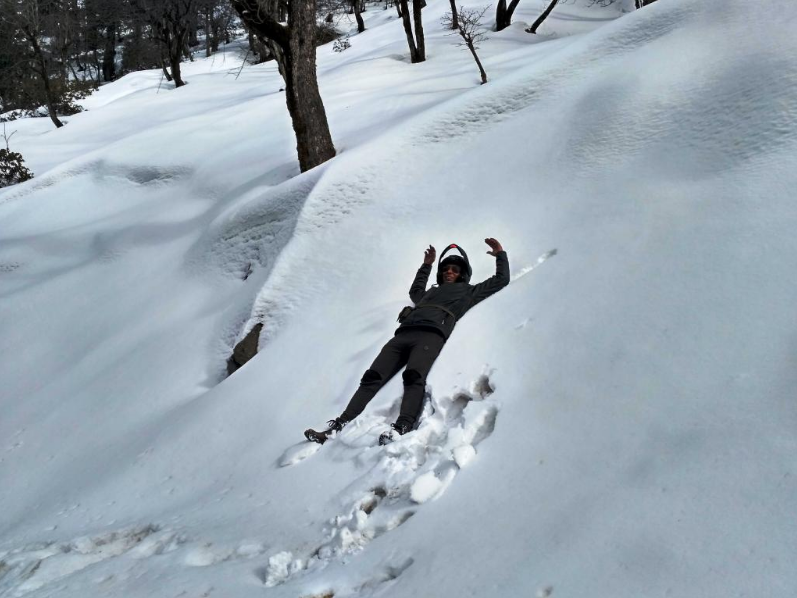 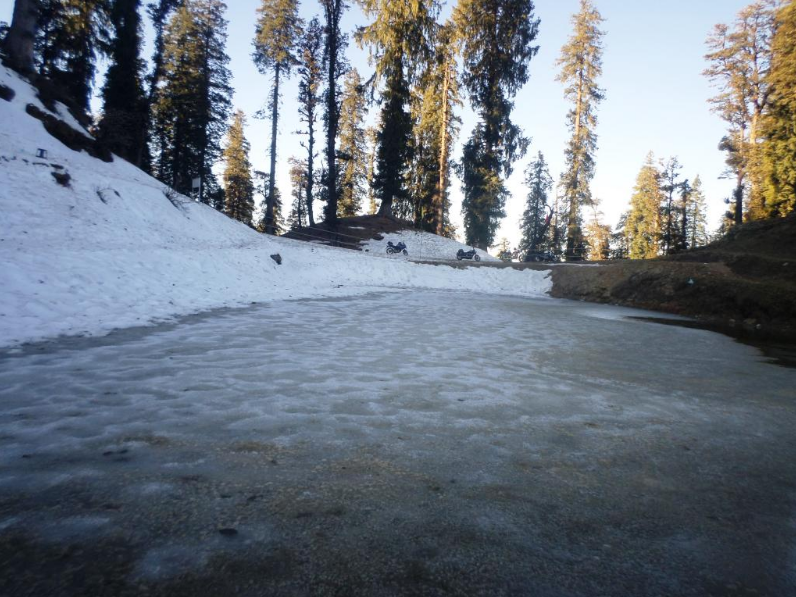 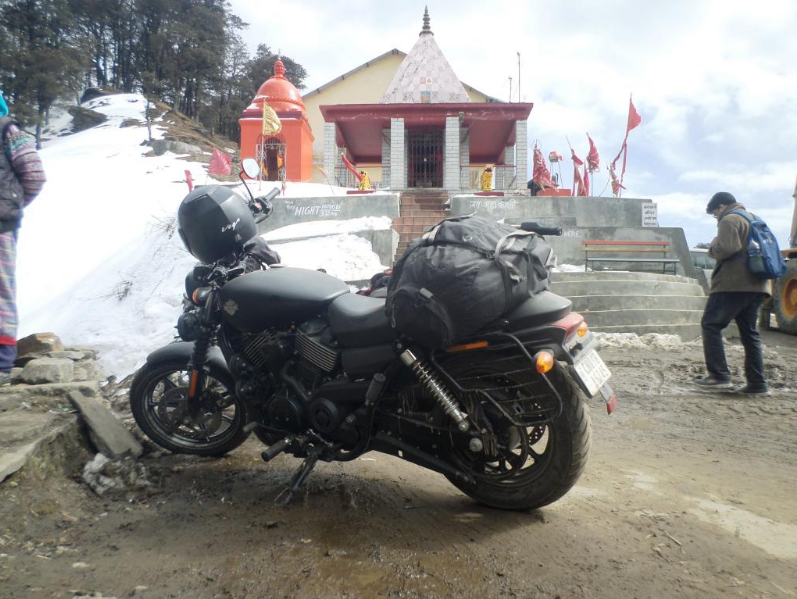 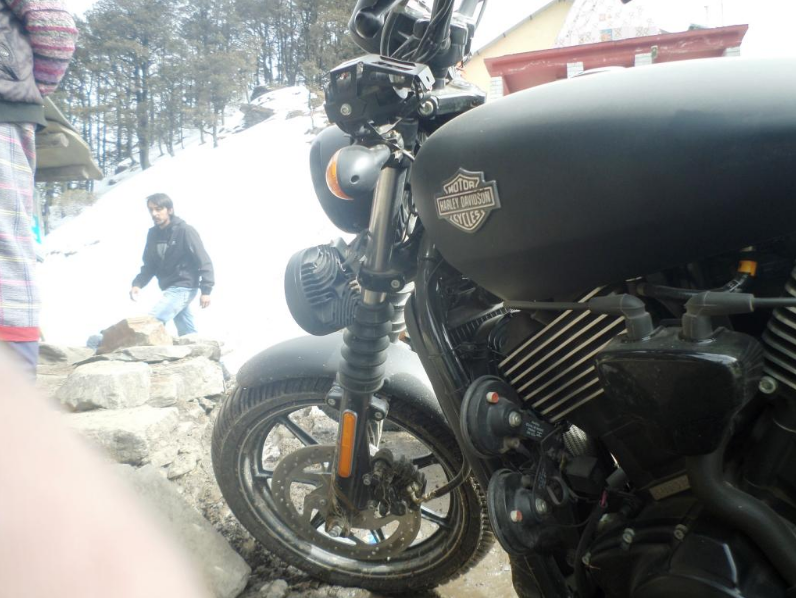 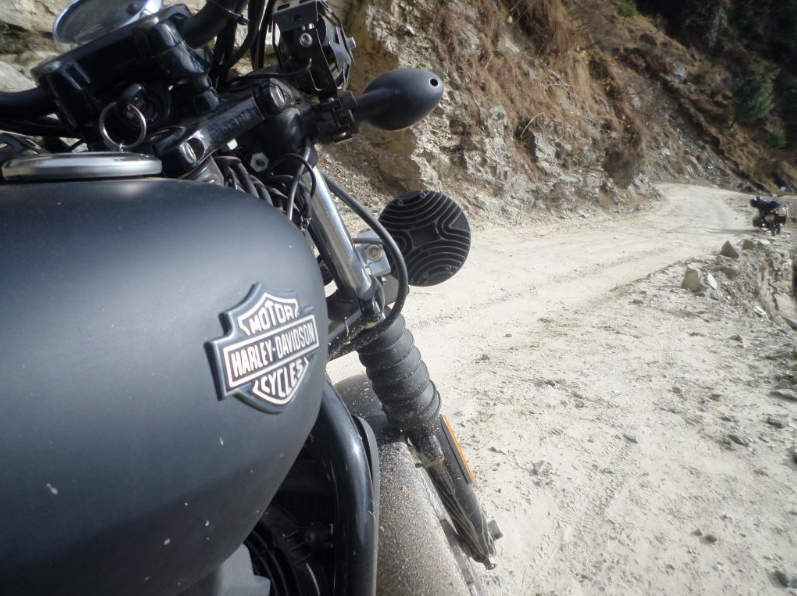 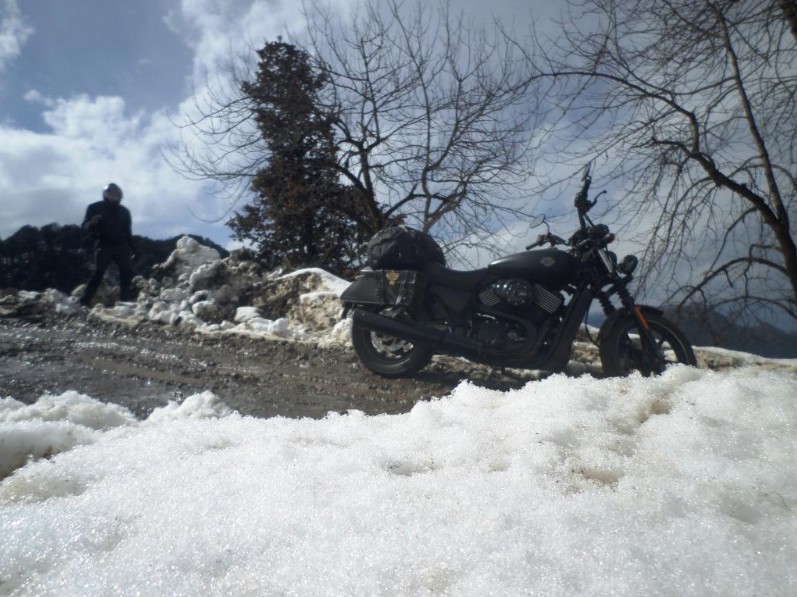 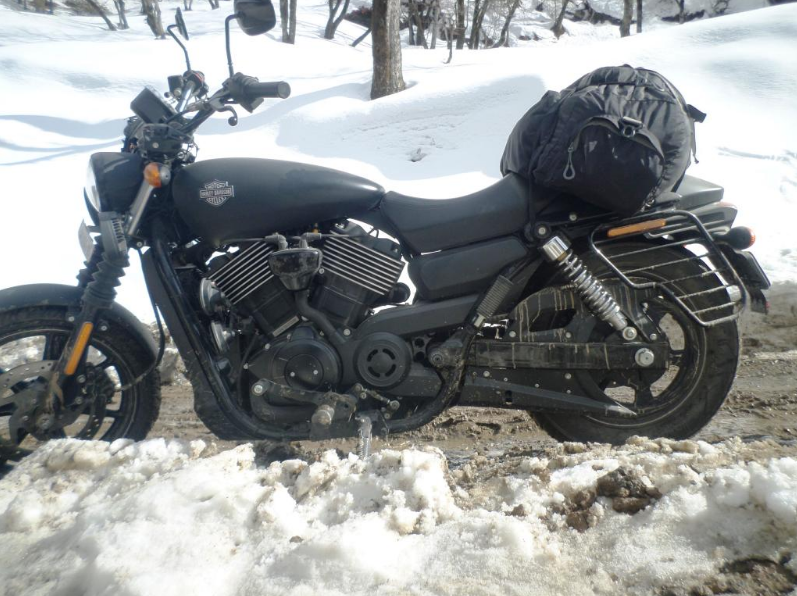 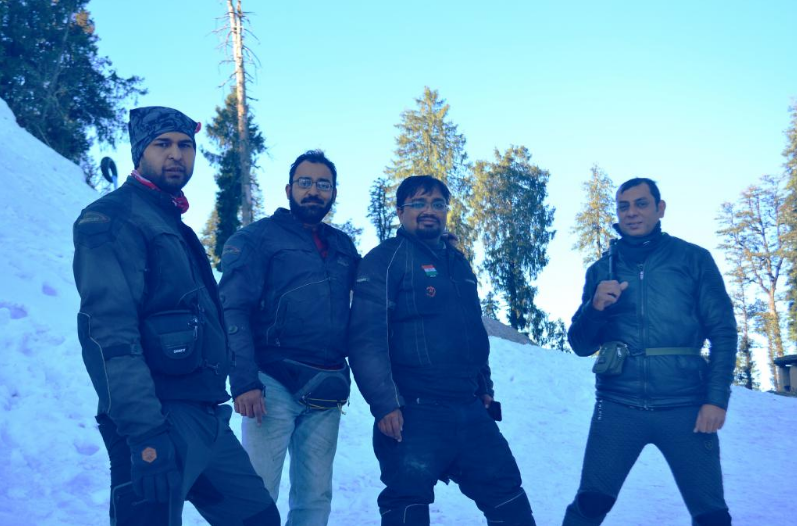 Day 3: Tattapani – Sunni – Basantpur – Dhami – Arki bypass – Kunihar – Dharampur – Chandigarh
The group split in three today. One of us had to go to Shimla to meet someone while Navi and AS150 left early so that they can cover time and reach Delhi on time. Dominar and Harley went together as they will be taking the Dhami Kunihar route which was new route for Vineet riding his Harley. The group reached Chandigarh at around 2:30 P.M. and the Delhi folks took off to ride 250 KMs more to reach home.

Epilogue:
The moto of BikerZone has always been:
“to bring out the best in every rider, inspire him in such a manner that he respects the rules and regulations on the road, respects fellow travelers/commuters, improves his riding skills along with his riding habits and matures not only as biker but also as a human being”

This ride has not been any different from this moto as we as a group not only came closer to our machines but also respected other riders and motorist in the group. The Slowest amongst us was Honda Navi and for the very reason was also the ride lead. BikerZone respects the craziness of the Rider more than respecting its ride and due to the same reason, 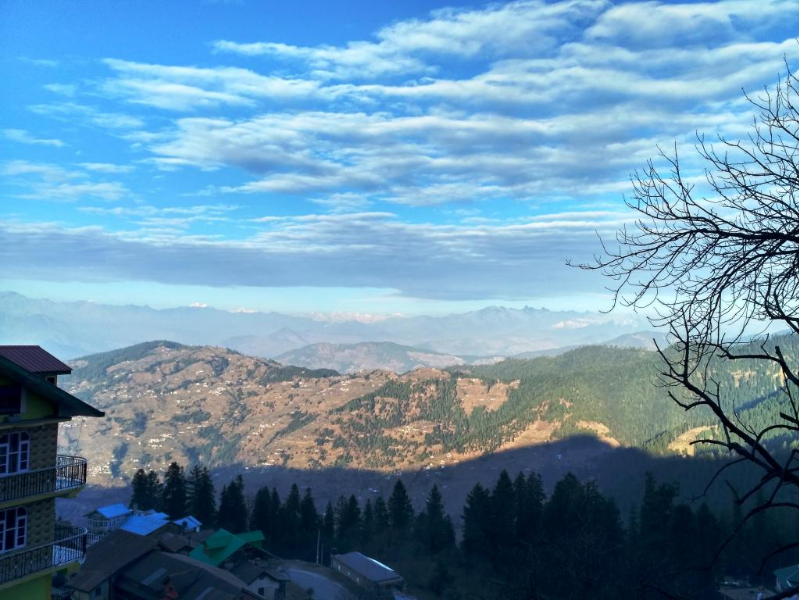 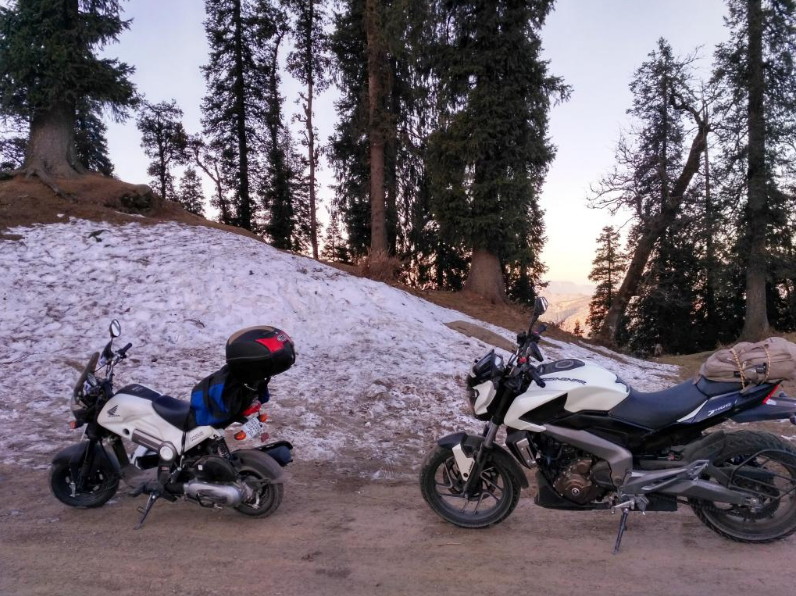 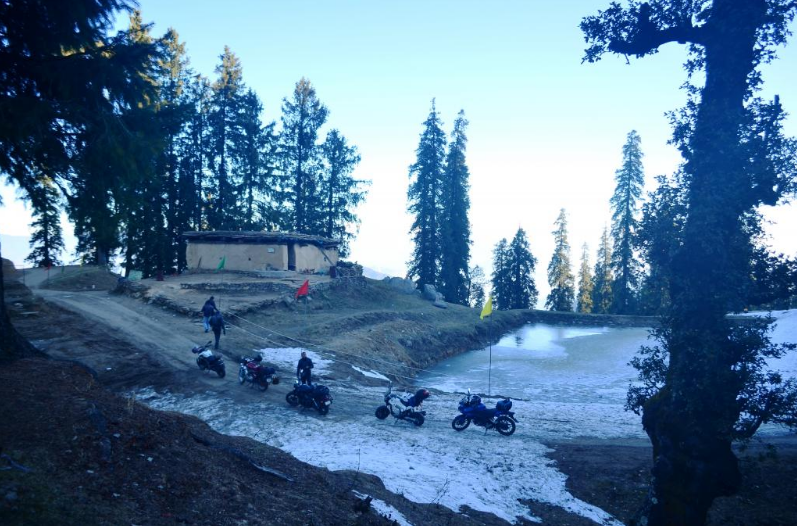 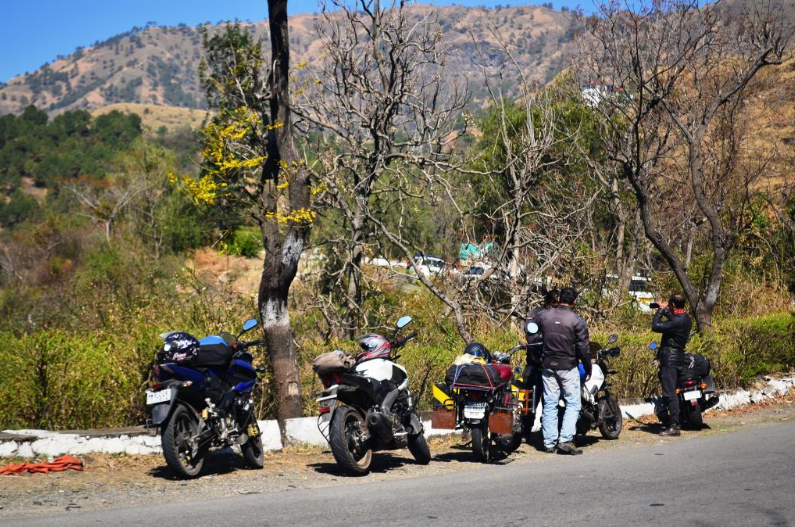 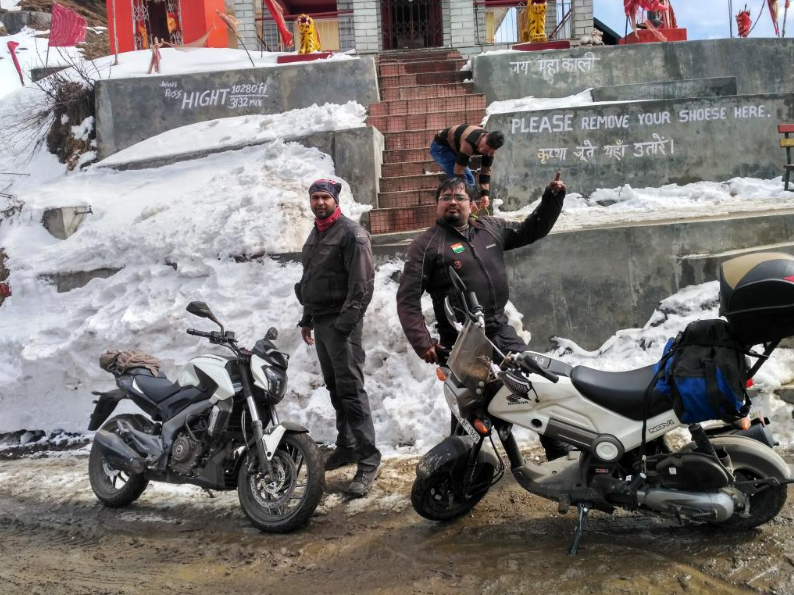 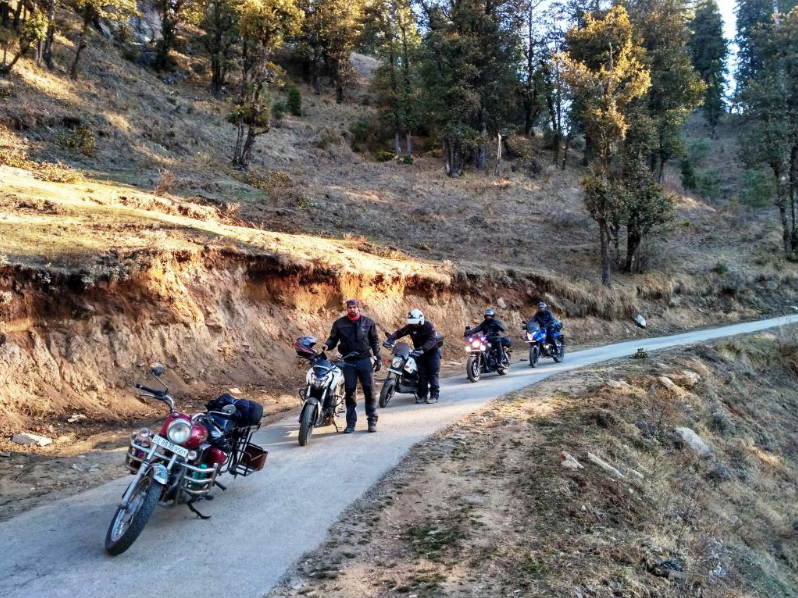 Excellent pics & superb narrative.
Narkanda-Hatu climb is indeed difficult. No wonder black ice forced you to turn back. I,too, had to drop my idea of reaching the top on my LML Vespa midway way back in October 2001 ( Even without encountering any black ice)
The slush between Khanag & Jalori top must have given goosebumps to the riders. Wish you had found the road amenable to return via Tirthan Valley - Aut - Bilaspur-Chandigarh.
Better luck next time!
Last edited: Mar 31, 2017