India is changing with the new technology as worked is progressing. Landline to WiFi and Mobile etc are changing with time.
4G is here.
5G is coming.
Landline will become useless ?
No.
It will rule as 4G signals are much weaker. Worst will be 5G.
Telecom Companiess will upgrade software only to move to 5G.
Landline will be out to New use.
May be it will work as your Antenna !
Wi-Fi Will be used to call.
LOL !

This will increase with time.
There will be new rules and regulations made to do such changes. You have to follow all.

Airtel has started rolling out Wi-Fi calling or Voice over Wi-Fi (VoWi-Fi) services in Delhi NCR. The service is available only to Airtel users in the circle who have an Airtel Broadband connection.

With Wi-Fi calling, users will be able to make and receive calls and SMS over a Wi-Fi network. In addition to having an eligible handset, you will also be required to have Airtel Xstream Fiber network to be able to use Airtel Wi-Fi calling.

Airtel, on its website, said that the Airtel Wi-Fi calling service will ensure that users get superior indoor coverage, crystal clear conversation and superfast call connection. At present, the service is available on selected Apple, OnePlus, Samsung and Xiaomi handsets.

How to enable Airtel Wi-Fi calling

Ensure that you have an eligible smartphone and are connected to an Airtel Xstream Fiber network.

Now enable Wi-Fi calling in your device settings. This may vary depending on your smartphone.

Restart your device and check for VoWi-Fi symbol in your status bar.

Airtel has started rolling out Wi-Fi calling or Voice over Wi-Fi (VoWi-Fi) services in Delhi NCR. The service is available only to Airtel users in the circle

.
Read in today's paper trai extended the IUC for another year.

.
Read in today's paper trai extended the IUC for another year.

Sent from my RMX1851 using Tapatalk
Click to expand...

This was bound to happen.
Jio needs money now or will become bankrupt....

adsatinder said:
This was bound to happen.
Jio needs money now or will become bankrupt....
Click to expand...

TRAI quoted that they are doing this for the benefit of older operators.

IJS said:
TRAI quoted that they are doing this for the benefit of older operators.

Sent from my RMX1851 using Tapatalk
Click to expand...

.
Read in today's paper trai extended the IUC for another year.
Click to expand...

You can call from Idea, Vodafone and Airtel without any boundation.

When they increased rates from 6 December, they have already increased from 400 to600 approx for 84 days..


NEW DELHI : The Supreme Court on Thursday dismissed pleas, including those of Bharti Airtel Ltd and Vodafone Idea Ltd, to review its earlier judgement that had asked telecom operators to pay more than ₹1 trillion of dues to the government.
Bharti Airtel, which has to pay ₹35,586 crore to the government by 24 January, and Vodafone Idea, which owes the government ₹50,000 crore, said they were evaluating filing curative petitions.
The court’s refusal to review its order is the latest setback for the telecom operators, which have reported record losses in the September quarter and are struggling under mountains of debt. Without any relief from the courts, the operators will now have to ensure that they pay the dues in about a week or seek urgent help from the government. 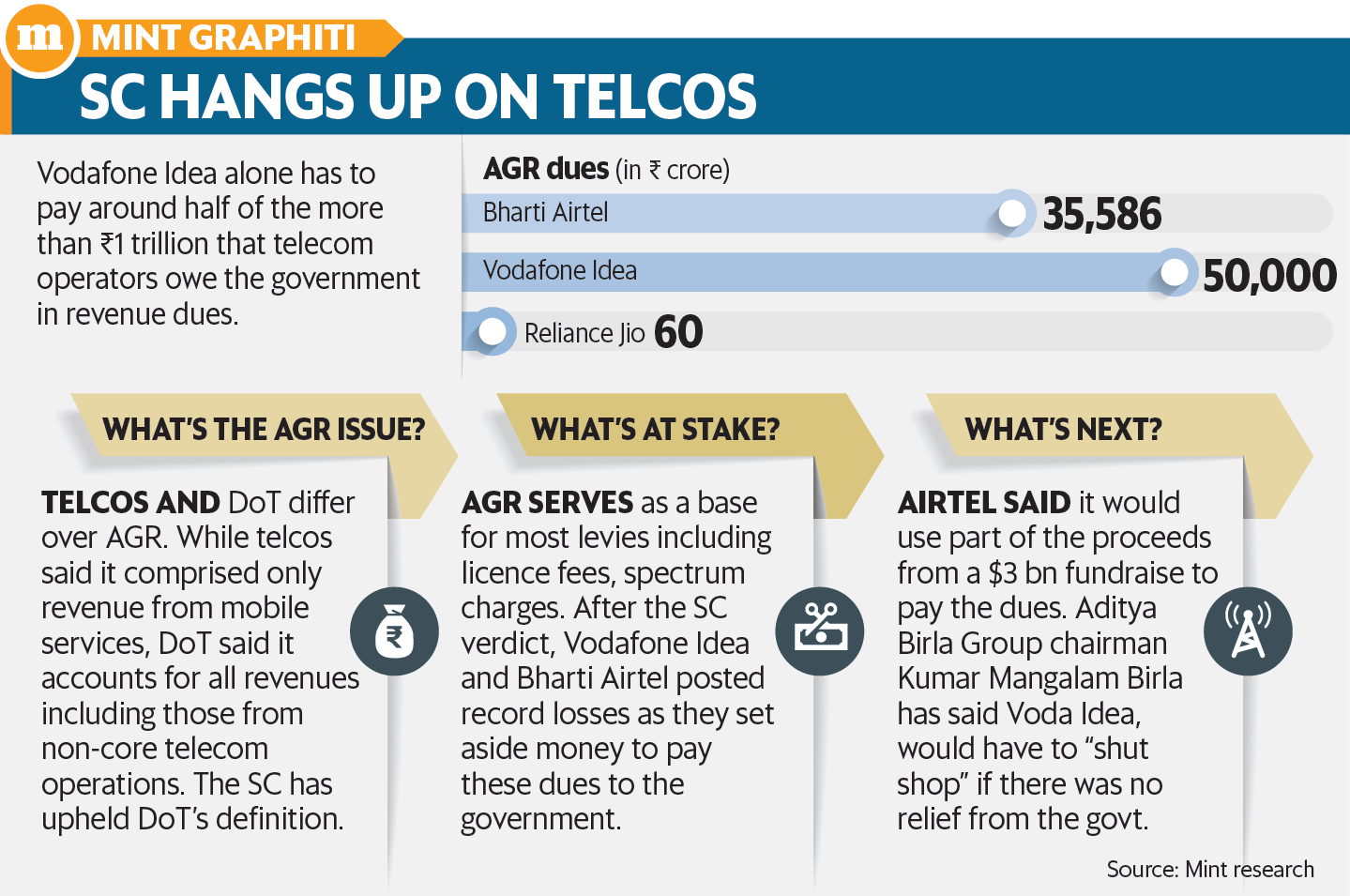 Graphic by Sarvesh Kumar Sharma/Mint
“There is very little chance of a curative plea being heard and that there may not be any fresh grounds," said Saurav Kumar, partner at IndusLaw. “The government too may not tinker much with the order but surely can help to restructure payment deadline for dues. For Vodafone Idea, bankruptcy may be the next step if they can’t manage to raise funds. Promoters are unlikely to put fresh money in this." Consumers will have to pay higher prices if the Indian telecom market turns into a duopoly, he added.

Bharti Airtel said the order will further erode the viability of the sector, which is already facing severe financial stress. “The industry needs to continue to invest in expanding networks, acquiring spectrum and introducing new technologies like 5G. The money now required to pay punitive interest, penalty and interest on penalty which forms nearly 75% of AGR (adjusted gross revenue) dues would have better served the digital mission of the country," Bharti Airtel said in a statement.
Bharti Airtel and other telecom operators had challenged the way the department of telecommunications (DoT) calculated AGR, based on which they pay licence fees and spectrum charges. Licence and spectrum charges are calculated at 8% and 3-5% of AGR, respectively.
The 24 October court order upheld the government’s definition of revenue, which defined AGR as all revenues of a licence holder including those from non-core telecom operations such as rent, dividend and interest income.

To be sure, Bharti Airtel has raised $3 billion and plans to use a portion of these proceeds to meet its AGR liabilities.
However, the future of Vodafone Idea is at stake. Last month, Aditya Birla Group chairman Kumar Mangalam Birla said the group’s telecom unit, Vodafone Idea, would have to “shut shop" if there was no relief from the government following the AGR verdict.
Tata Teleservices, which sold its mobile services business to Airtel, faces dues of ₹14,000 crore. An emailed query sent to Tata Sons was unanswered till press time.
In an exchange filing, Vodafone Idea said it is exploring further options, including filing a curative petition.
The tussle over the definition of AGR had started when operators migrated to a new revenue-sharing system offered by the government in 1999 under which they agreed to share a certain percentage of revenue with the government.

The October verdict also made non-telecom companies holding licences for internal communications and signalling liable to pay licence fees on their entire revenue, even if they do not offer consumer-facing telecom services.
DoT has sought ₹1.72 trillion from GAIL (India) Ltd, ₹22,168 crore from Power Grid Corporation of India Ltd, ₹15,019 crore from Gujarat Narmada Valley Fertilizers and Chemicals Ltd and ₹290 crore from RailTel Corporation of India Ltd by 24 January.