On cloud 9 in Kinnaur

Thanks a lot adsatinder

Back in July- August 2008, I had planned a road trip to Sangla valley from Delhi however we ended up doing Kinnaur, Lahul, Spiti in 7 days. I had been to Himalaya before but the kind of landscapes I got to see during my Kinnaur, Lahul, Spiti trip, mesmerized me completely. I fell in love with this region instantly and back then I had promised myself that I shall come here again.

It took me 8 years to fulfill that promise. All that wait of 8 year was worth it, for this turned out to be one of the best trips in my life.

Preparing for a trip or trek is almost as enjoyable as doing the trip / trek itself.
I had a few concerns while planning this trip. Unlike the last time, I was taking my wife and my three years old daughter. My wife, being an ex-volunteer for Youth Hostel was used to such trips and treks but the main concern was whether my daughter would face any troubles during this trip.
After some online research on altitude sickness for kids and after some deliberation, we decided to take her along.
We fixed the dates as 10th August to 17th August and my itinerary was as followed:

A few more concerns about the climate and road conditions etc were cleared after I posted my queries on a couple of forums including bcmtouring.

I booked rooms in Hotel Hatu, Narkanda and hotel Srikhand in Sarahan well in advance as both the hotels are run by HPTDC. It turned out to be a wise decision as Hotel Srikhand was completely booked when I checked the availability. Luckily their cottage was available (at higher price) and I booked it immediately.

I was quite undecided about the accommodation options in other places like Kalpa and Sangla. I decided to take some risk and do on the spot booking for these places after checking the options then and there only.

From another forum, I obtained a list of drivers having good reviews and finalized one with scorpio. Dalip kumar had agreed to make himself and his Scorpio available through out this duration however just a couple of days before the trip, he called me to inform about a medical emergency in his family. As a result, he wouldn’t be available however he promised to provide us his replacement. He also agreed to send his own scorpio with this replacement guy.

Sunny, our replacement driver was already present outside the airport and soon we started our journey towards Shimla. A few minutes after taking some shortcuts, we hit the Chandigarh - Shimla highway. Soon we noticed that the hills and mountains ahead were engulfed in dark clouds. We were greeted by a few drizzles on the way.

I kind of expected that we will have moderate to heavy rain during our trip and we were quite mentally prepared for it.

After having a quick meal at Nikki Rasoi, near Parwanu we headed towards Shimla. On our way after Dharamkot, we spotted a big, wholesale market for apples. Hundreds of trucks were parked in the vicinity. Truly, its a land of apples
We also noticed that road widening work was in progress but thankfully that did not result in traffic jams.

Soon we reached Shimla. The already crowded town has become even more crowded, I felt. More vehicles, more tourists (including us) and a lot more chaos. The fog did not help either. Thankfully, we had not chosen to stay in Shimla, instead, we headed straight to Narkanda.

A misty road in Shimla 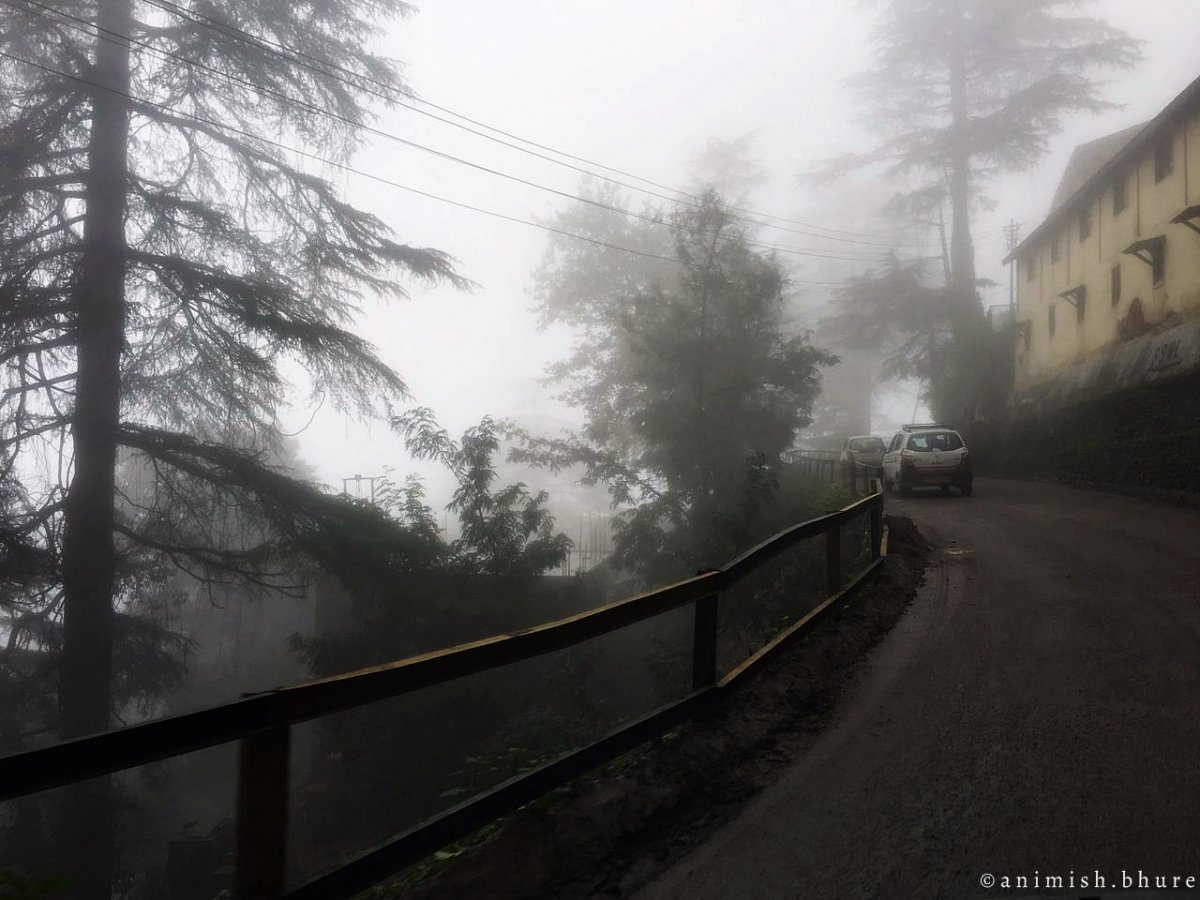 Soon after we left Shimla, the scenery got better. 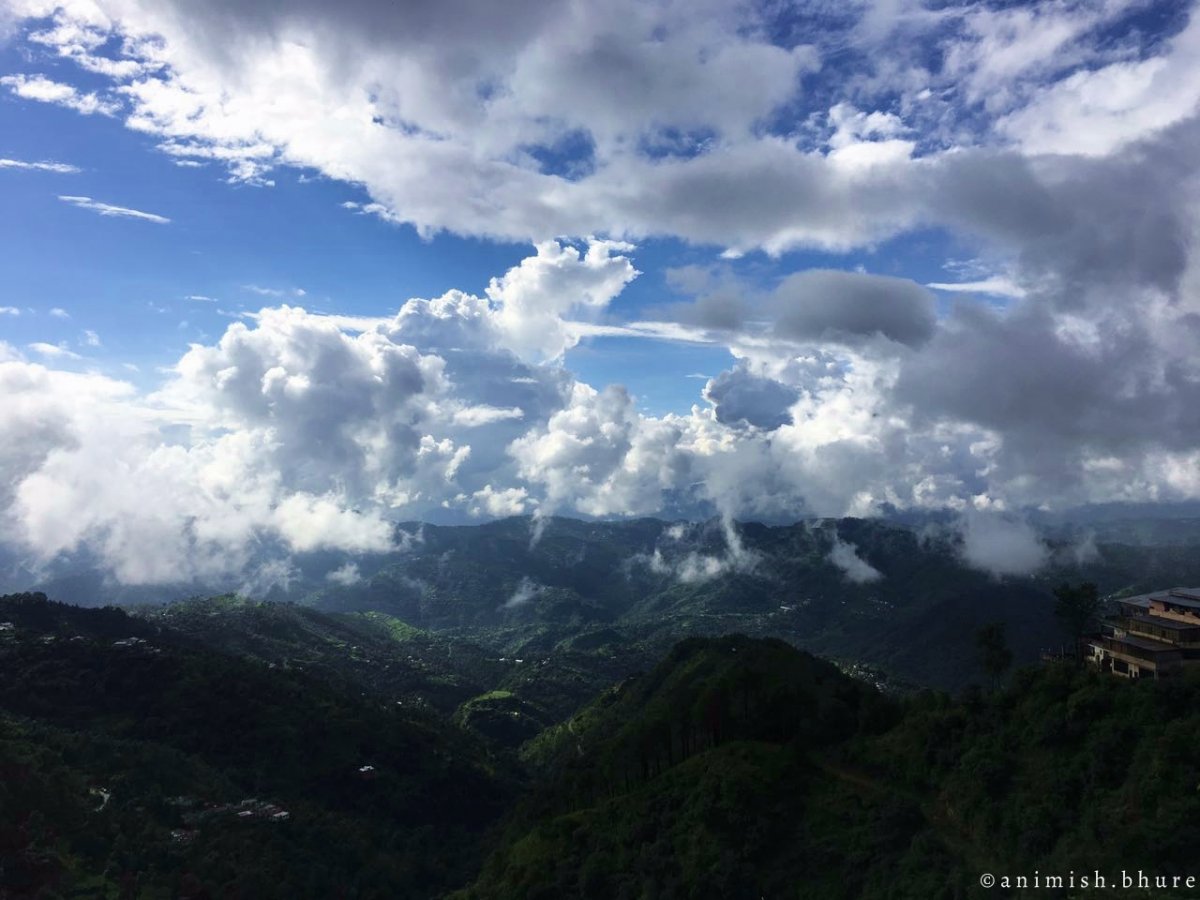 The reason I chose the title of my travelogue as On Cloud 9 in Kinnaur is that, through out the trip, we had had some magical shows put up by clouds. 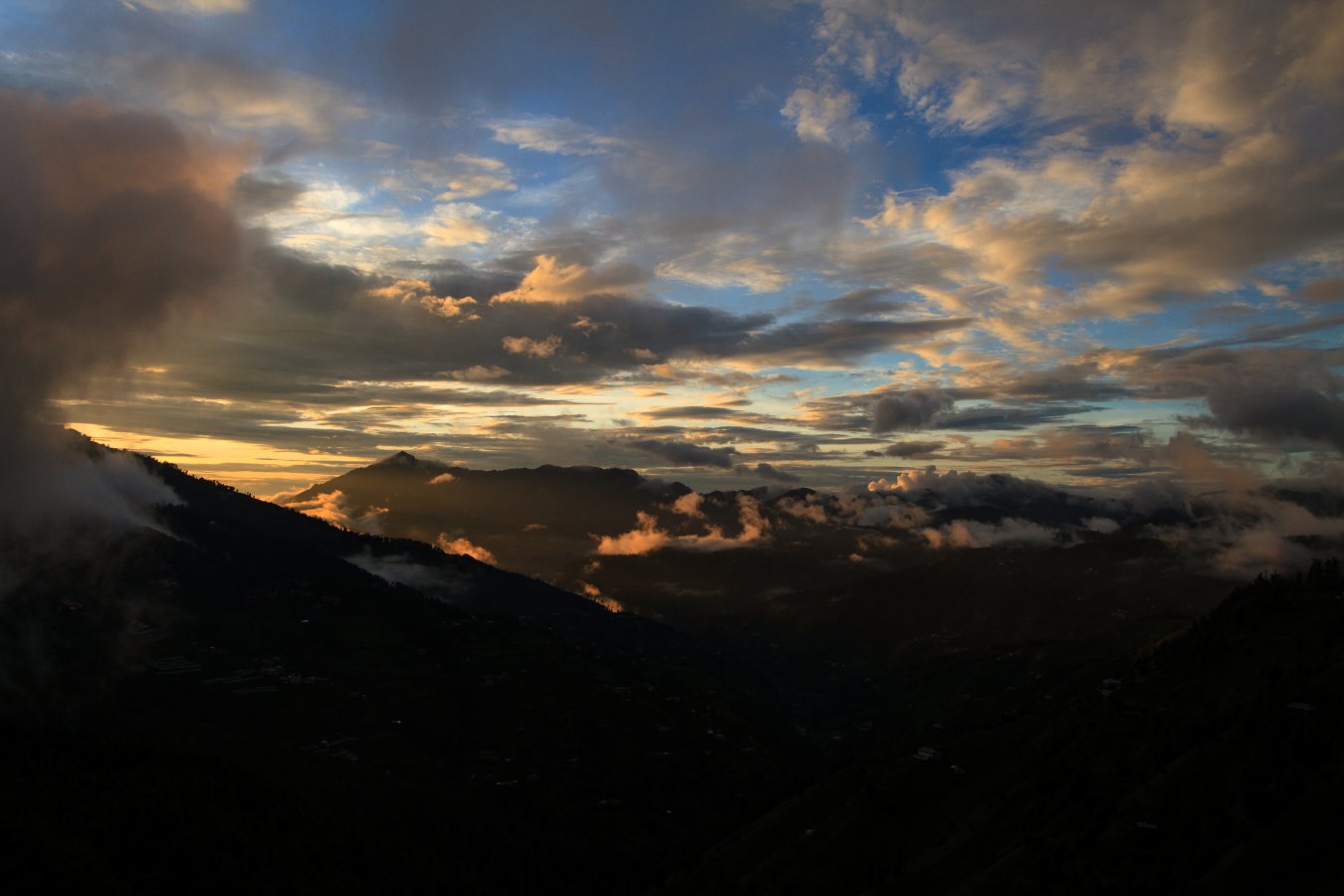 While we were still in Theog, we spotted this beautiful hotel / house at some distance on a hill with pine trees on it's slopes. Clouds again were magical in that golden twilight: 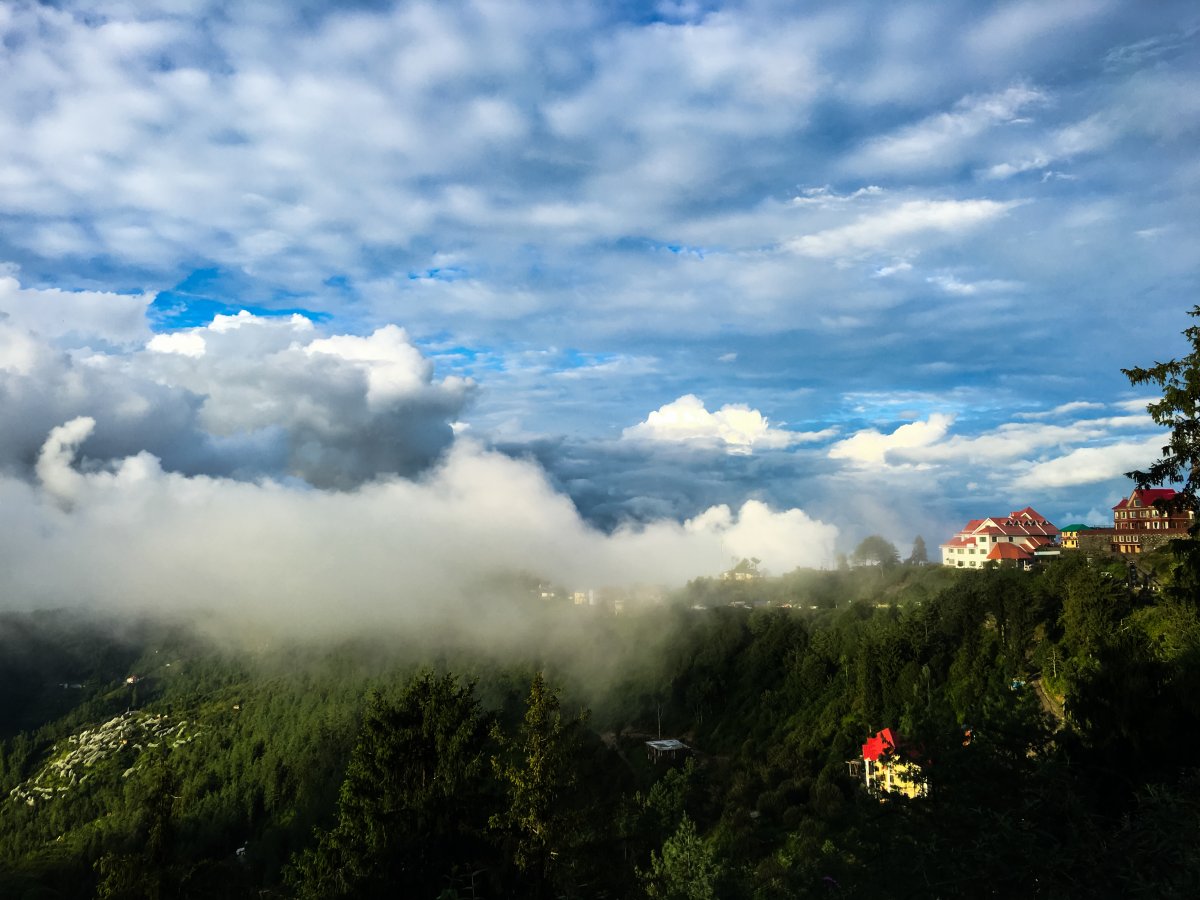 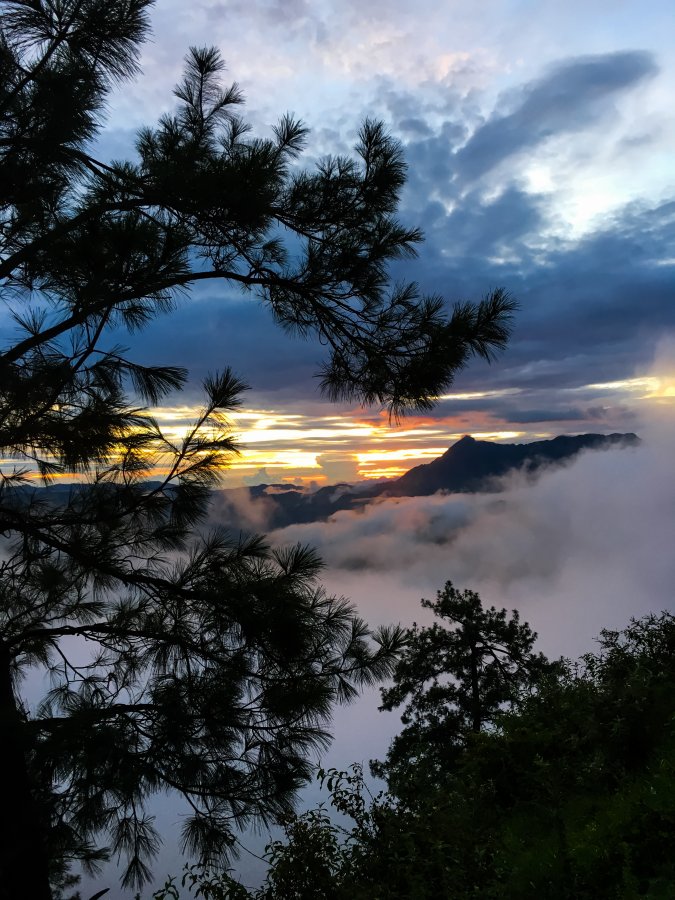 Late in the evening, after a couple of more stops for tea and snacks, we finally reached Hotel Hatu, Narkanda in the evening. It was cold enough to make us pull out jackets and wear them.
The room was sufficiently good on the first floor.
I was quite exhausted due to lack of sleep, hence I decided to sleep early.
Last edited: Oct 15, 2016
S

Great pics & write-up by someone who is doing it for the first time on the forum.
Kudos.

Beautiful pics all the way
Will stay tuned for more. Good Luck !!

Day 2 of our trip began early for my wife, as she made a quick trip to Hatu temple, while, I agreed to look after my daughter as she was still sleeping.

From photography point of view the visit to Hatu temple was not much fruitful as it was quite cloudy and foggy through out. She managed to come up with these two pics: 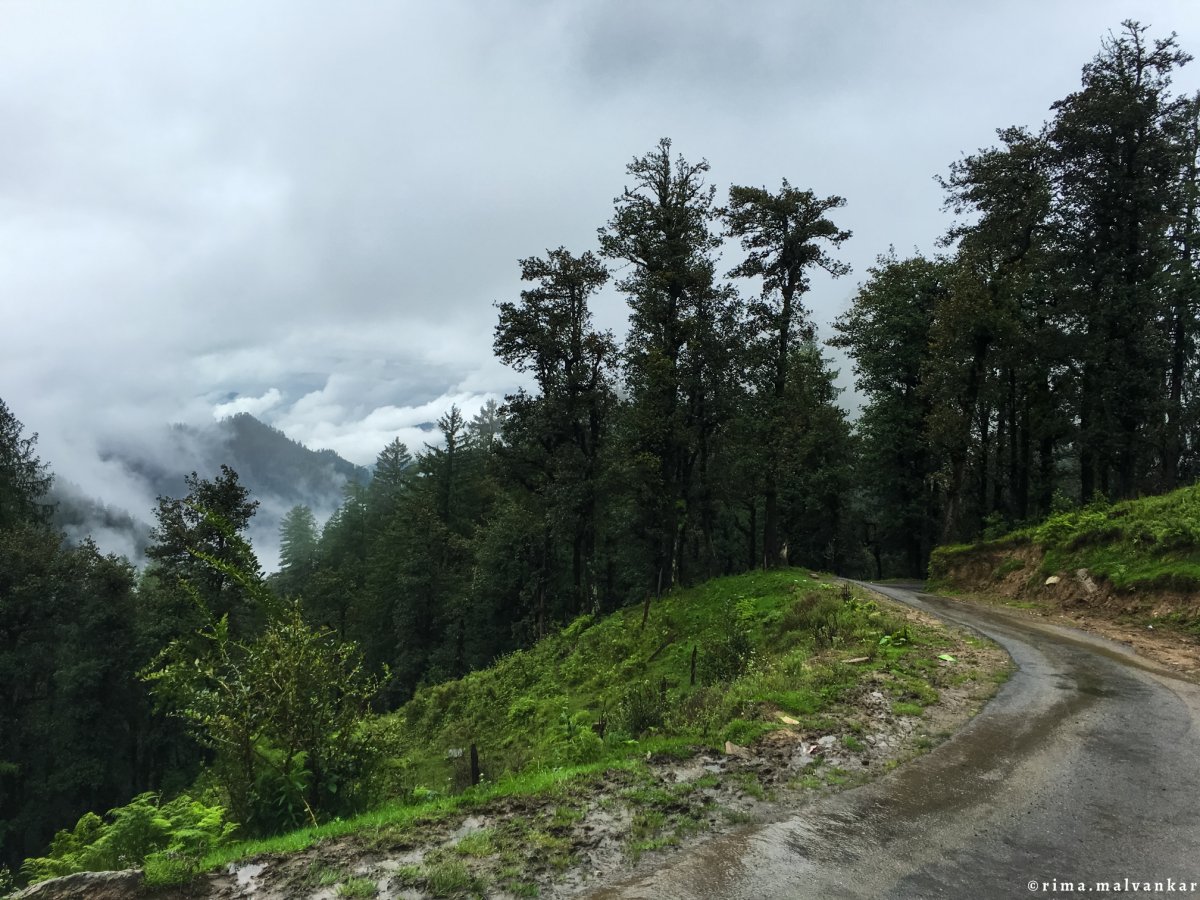 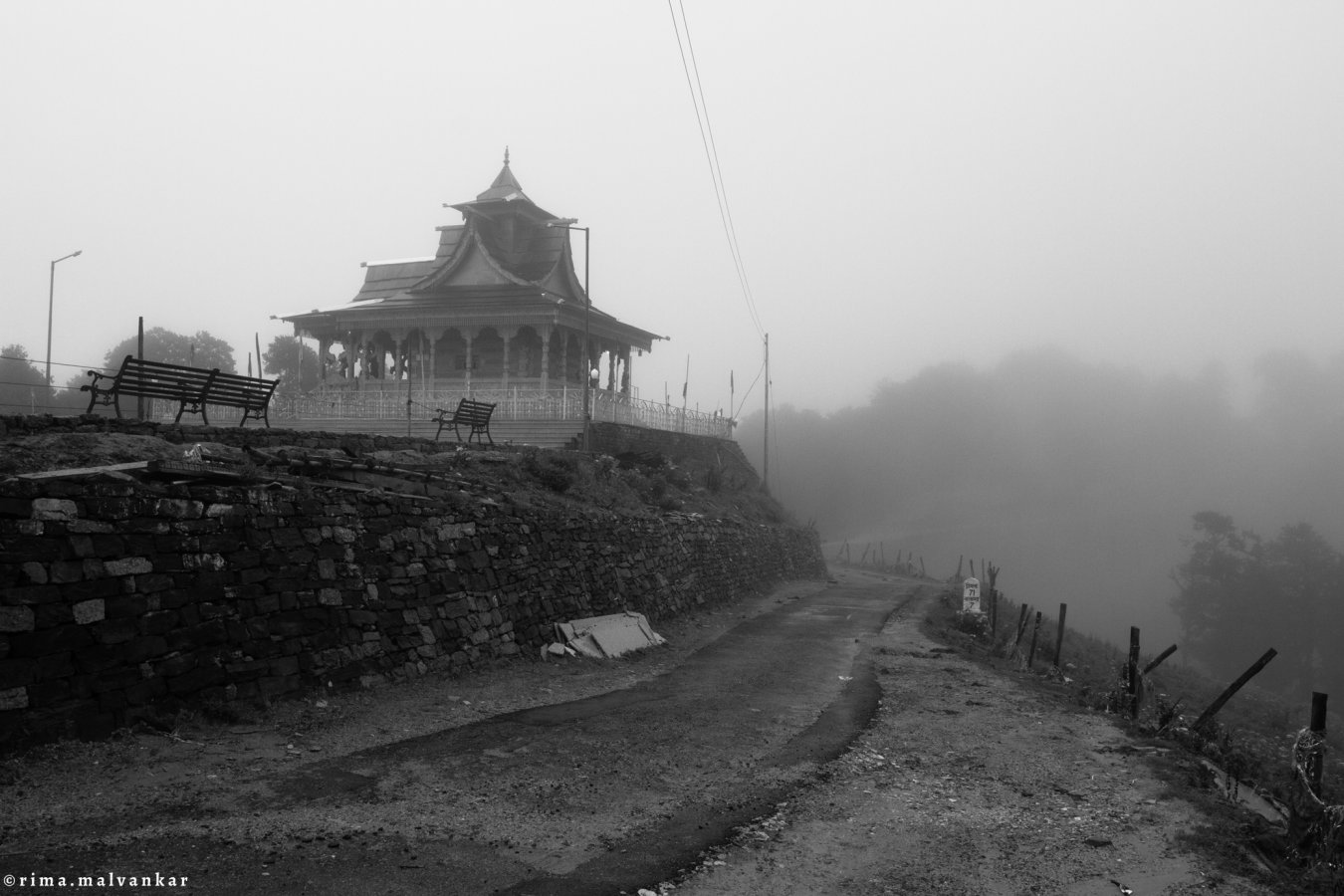 By the time she returned, me and my kid had our breakfast and were ready to move ahead.

Soon we left Hotel Hatu by 9 am.

The roads were in good condition overall but it was still quite foggy for another half an hour. 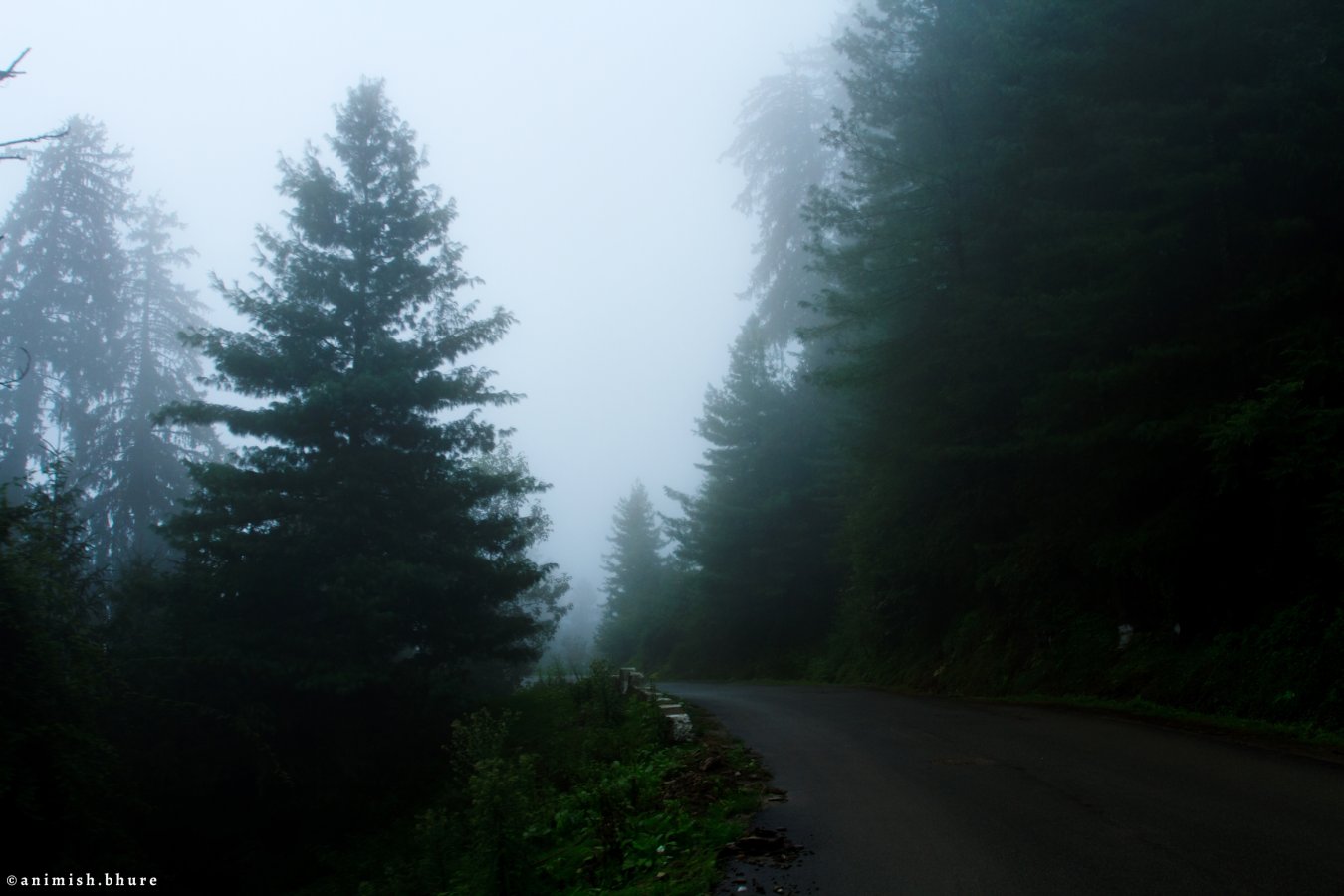 Soon we were greeted with the views of Sutlaj for the first time in our trip. As the cloud cover thinned, the silver thread of the river Sutlaj brought back many memories. In 2008, I had seen it flowing ferociously through the gorges, and valleys. During the 2008 trip, when we had stayed at a small hotel a few meters away from the river bank, it’s flowing sound had filled my ears through the night.
The first time I had read about River Sutlaj and Kinnaur region was in a marathi novel ‘Rarang Dhang’ by Prabhakar Pendharkar. That novel, which I read during my childhood perhaps was one reason behind my love for the Himalayas. 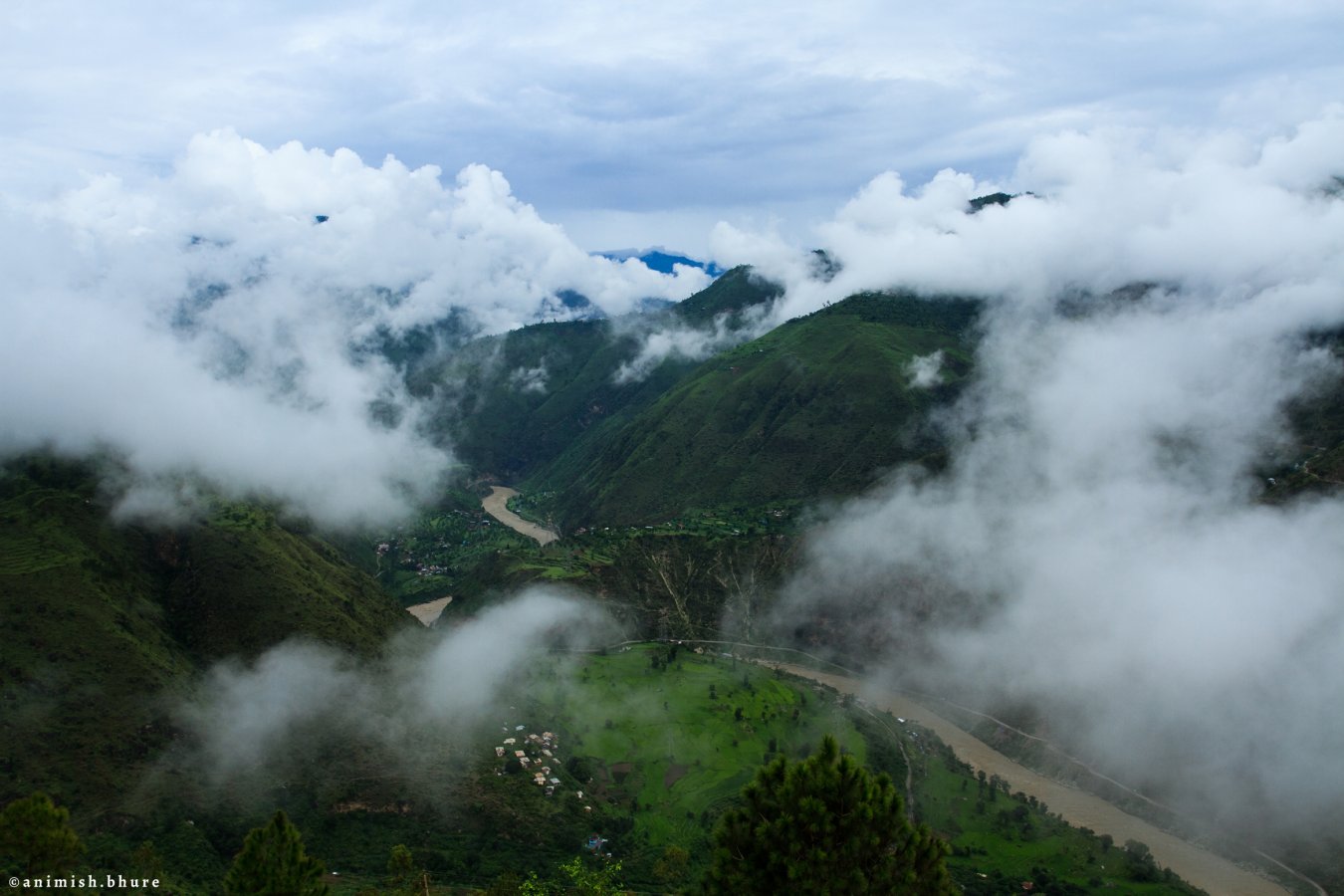 Quite contrary to my expectations, the road was in really good conditions. 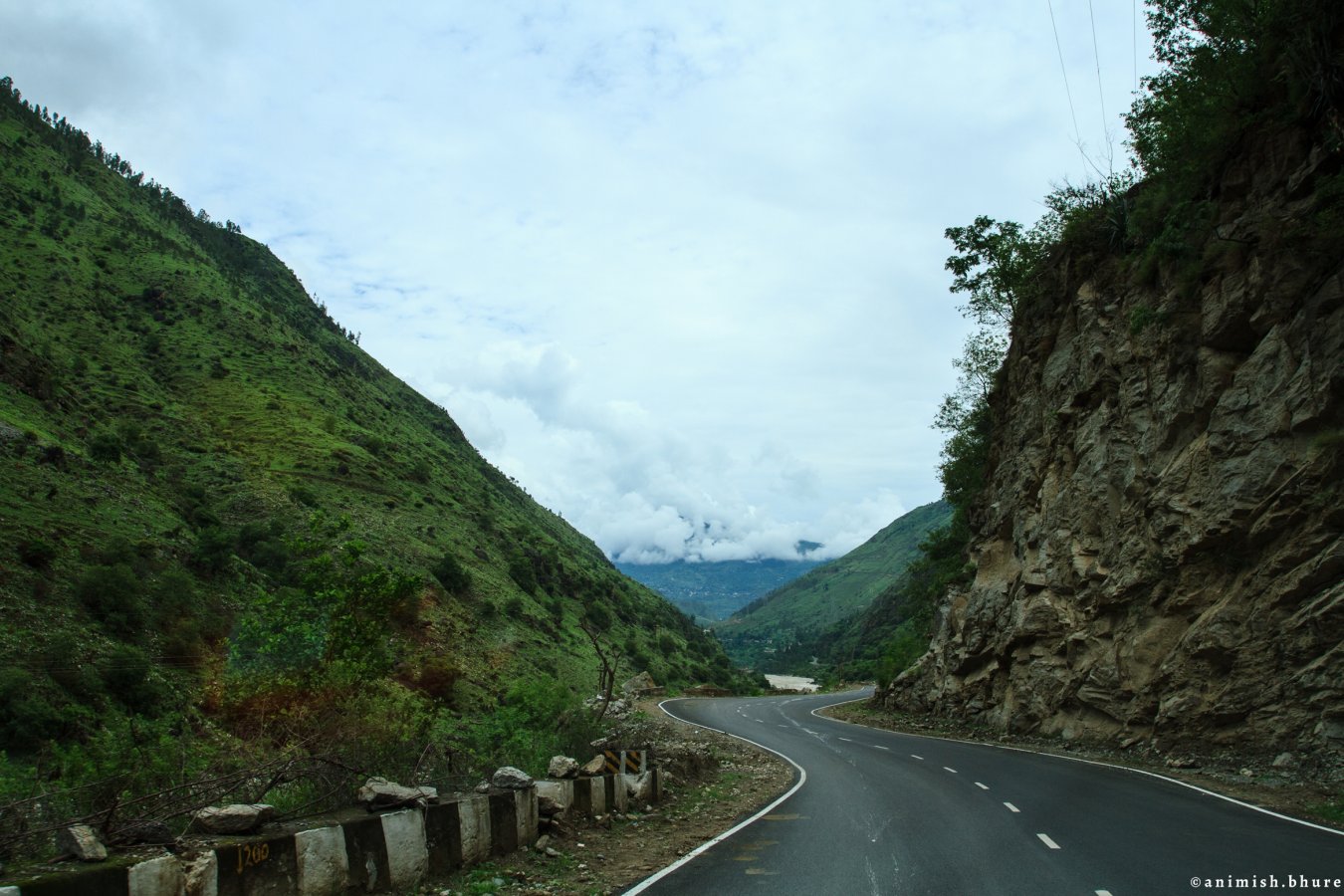 Soon we could see the bustling town of Rampur Bushahr from a distance. River Sutlaj divides the town into two parts. A large Hydro power project is built here. Through Srchandras’s post I came to know about a beautiful structure in this town called ‘Padam Palace’.
We thus stopped by and visited Padam Palace which is right across the market street.

This palace was built by Raja Padam Singh in the early 20th Century. The old fashioned royal structure has some impressive wooden work.
The chief minister of Himachal Pradesh, Virbhadra Singh is the son of Raja Padam Singh and presently the owner of this beautiful palace.
I would recommend taking some time off to admire this lovely structure. The security guard normally wouldn’t stop you from entering the premise. 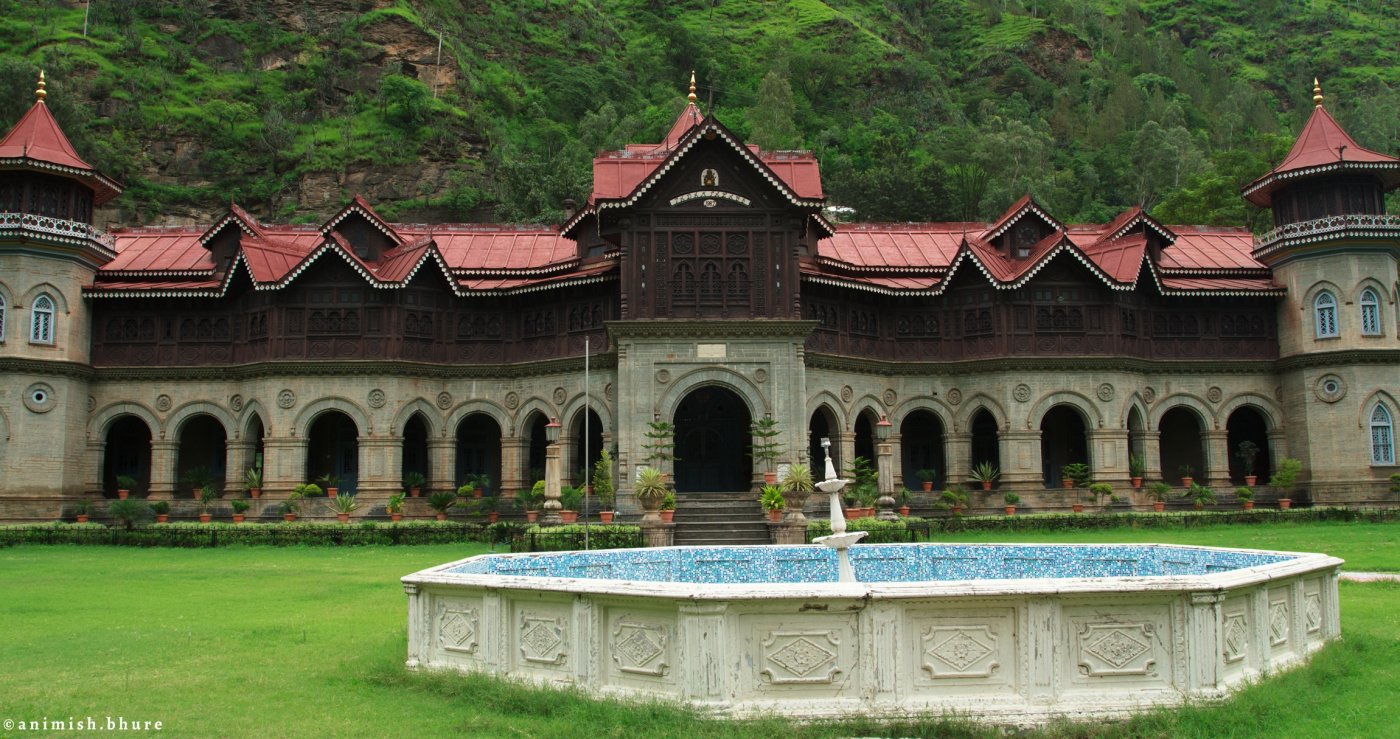 After this brief halt at Rampur Bushahr, we started our further journey. The road was still in decent conditions (To be frank, the roads in some part of Mumbai have been so pathetic during this monsoon, that any other roads with less potholes seem more decent to me now)

We then halted near Jeori around 25 kilometers ahead of Rampur for lunch.

I was looking forward to travel through one of the most famous stretches of the road in the Himalaya. It had started drizzling by the time we reached that section. I got off the vehicle to click some images. The beauty of this landscape is stunning, it is raw, it is imposing.

Here on the one side there is awe inspiring Himalayan mountain slopes, and a few hundred meters down the River Sutlaj flows ferociously, its vigorous sound fills your ears.
Despite all these odds, Border Road Organization (BRO) has done a commendable job by carving out roads through these huge mountains in mid 60’s.
As compared to the Sahyadri mountain range in Maharashtra, Himalayan mountain range is younger and still unstable. Hence there are more frequent landslides in this region. Sometimes, even a small push from a grazing mountain goat is enough to trigger some kind of landslide here.
I remember, during my 2008 trip when I was heading to Sangla valley, on the same stretch here, I saw a loose rock, slightly bigger than a cricket ball had smashed into the windshield of a maruti 800. Luckily, no one was injured then. 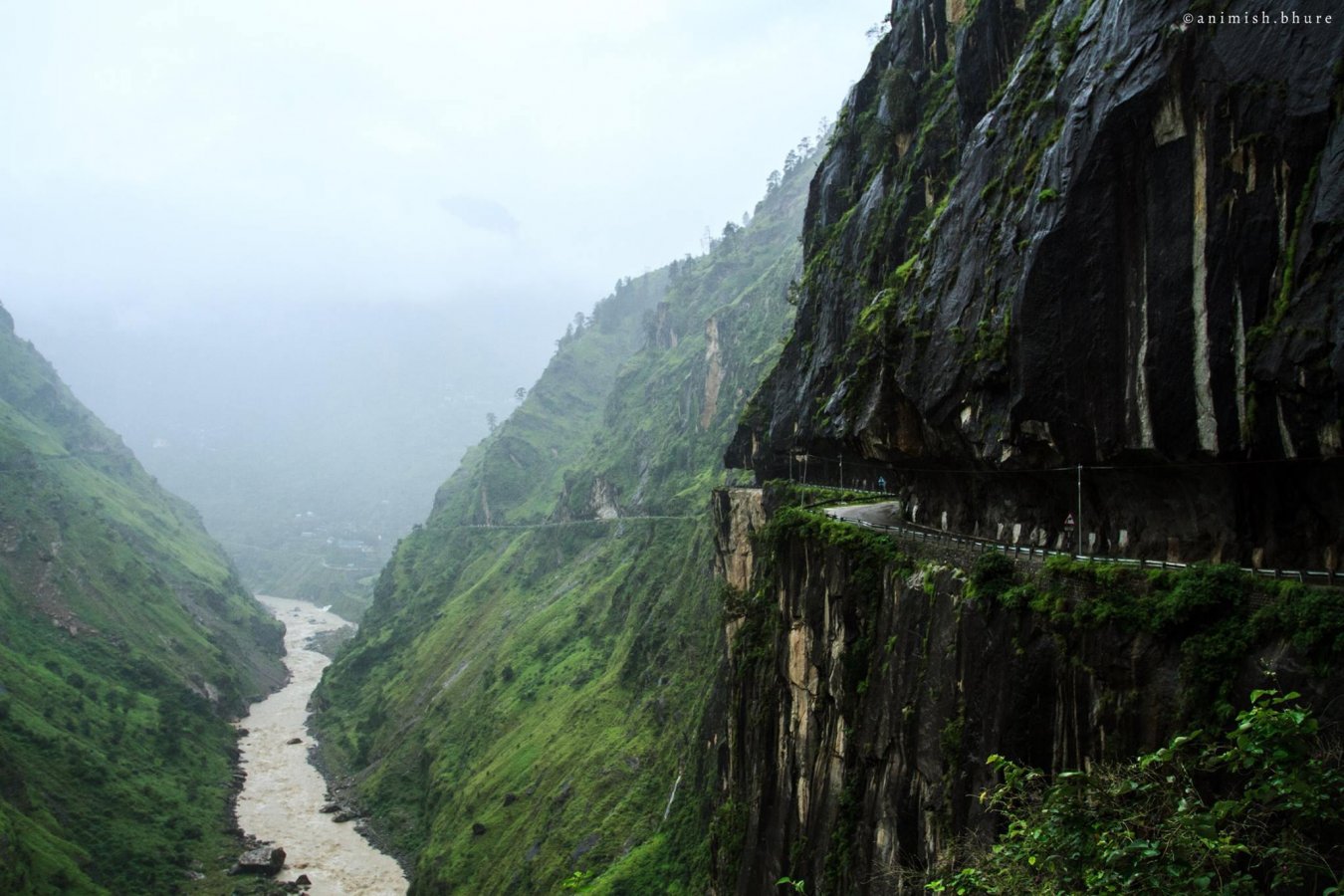 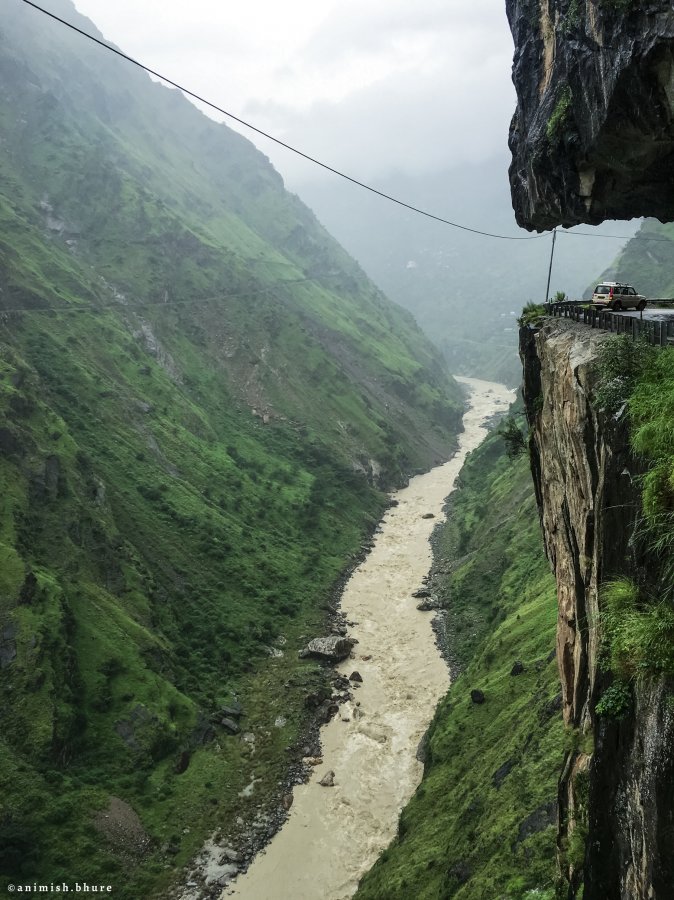 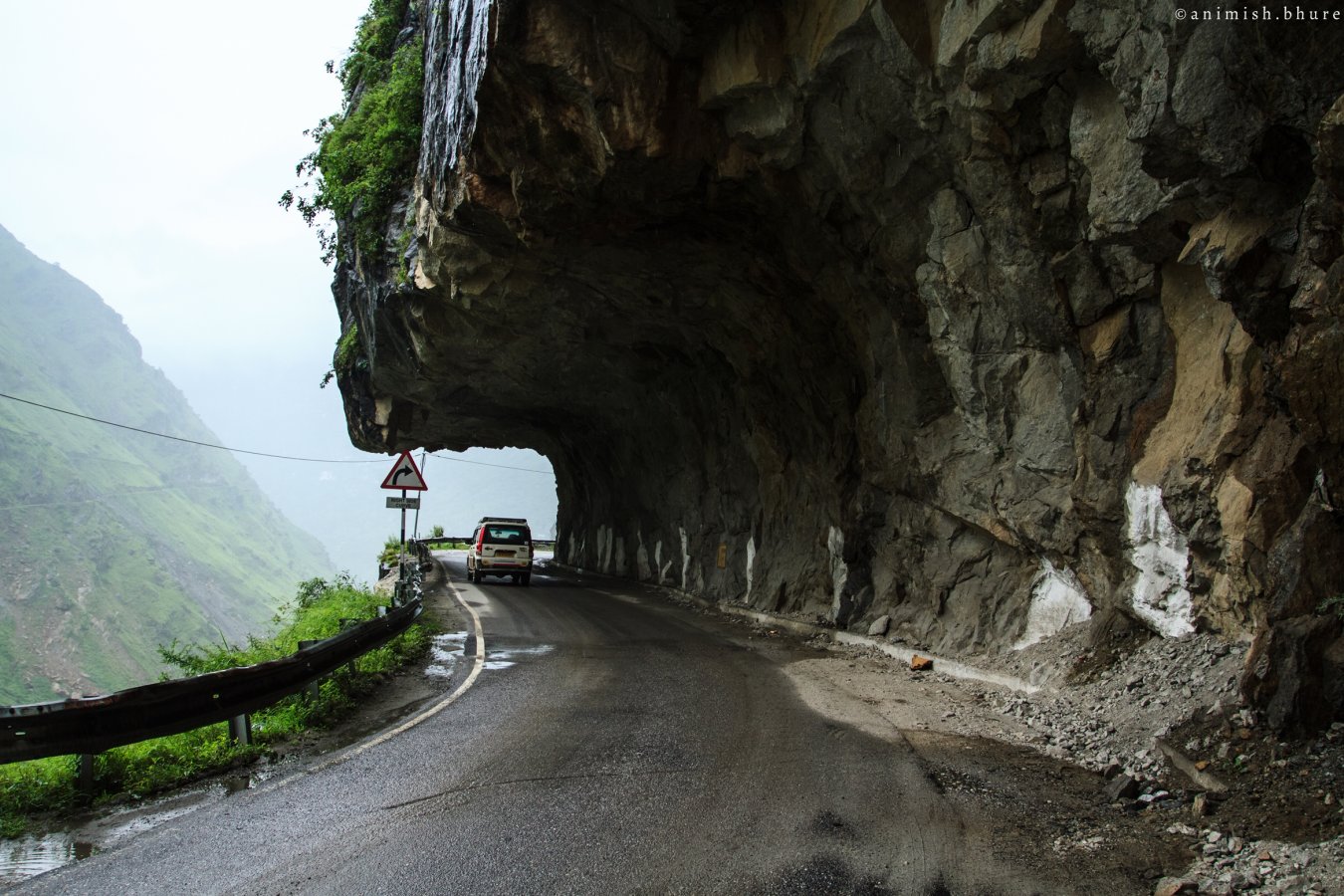 As we were approaching Tapri, I was thanking my stars in my mind, for there were no road blocks due to bad road or broken truck. Just as we entered Tapri, our driver who had briefly halted at a petrol pump, brought the news that recently a landslide had blocked the road and we would need to take a small diversion.

Luckily this diversion was not bad. We were able to cross that patch without getting stuck or without any major inconvenience.
Slowly but steadily we reached Karcham from where a road goes to Kalpa, Nako and another road goes to Sangla valley.
We could also see an old road submerged in water.
According to the locals, and my driver, the hydro -electric project has done a lot of harm to the area and the ecosystem. It has resulted in the current changes, water levels that has made the mountain slopes really dangerous and in fickle state.
We now were on our way to Sangla valley. The weather was getting cloudy again and we had brief spells of showers. 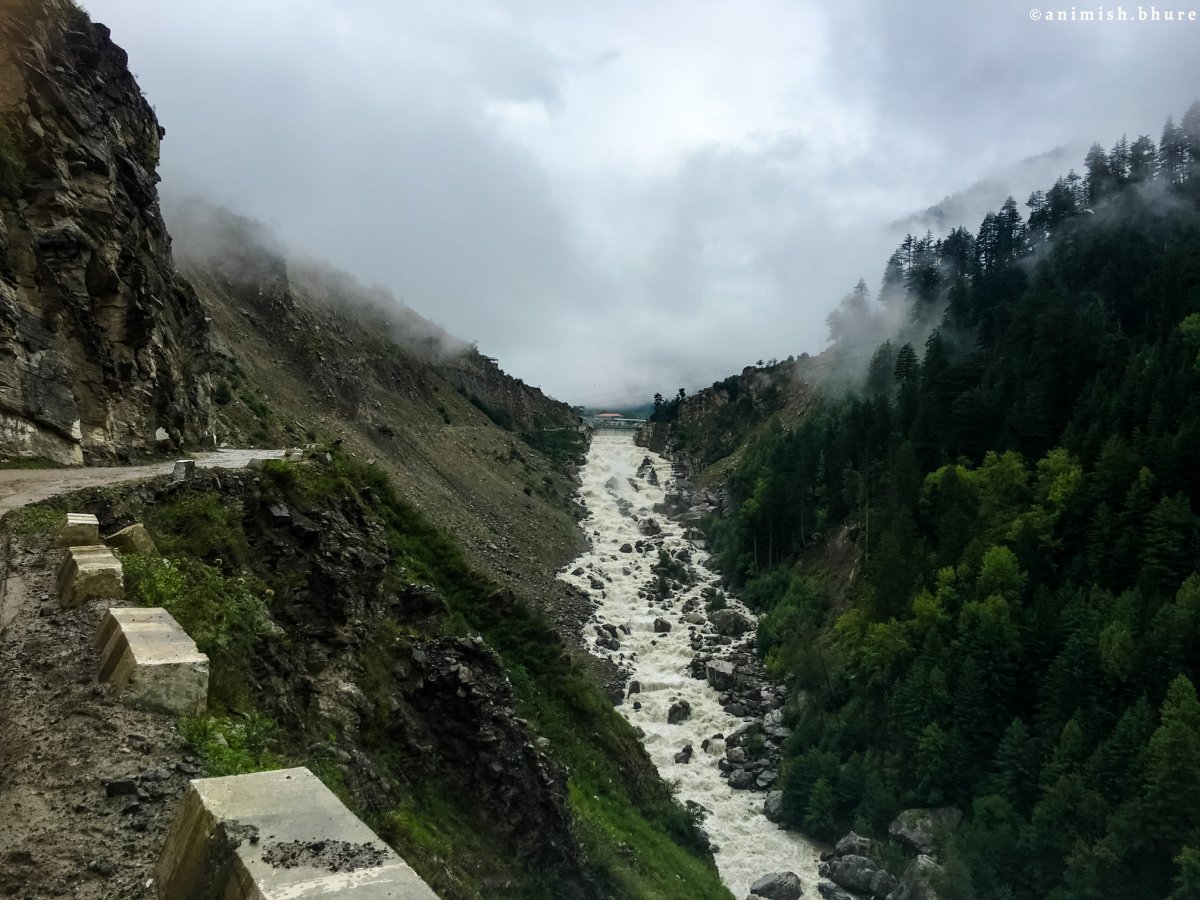