On the road in the Western Ghats

Inspired by the fact that domestic tourism is up and running, and conscious of the fact that tourists from abroad are still banned in India, I recall previous jaunts from years ago.

We first came to Kerala in January 2006. I have described before the idyll of "Friday's Place", our homestay on the Neyyar River near Poovar, at the southernmost tip of "God's Own Country". But I have skimmed over the week-long drive into the Western Ghats... Chalo! Let's go!

Giri, our driver, thought he was a racing driver. He attacked the winding roads with the energy of a Jackie Stuart, his hero, and tried to emulate him.

From Poovar we were aiming for the foothills and Kodaikanal (in the neighbouring state of Tamil Nadu, bordering Karnataka at some hilly viewpoints). But first we had to go to Palani where we witnessed religious pilgrims with pierced cheeks doing puja at the holy mountain. A hawker was selling cold drinks (soda pops) in old-fashioned thick glass bottles with a glass stopper, recognizable from 1960s Crete. Codd-neck bottles. They are collectors' items nowadays. There's a kind of marble inside to prevent the carbon dioxide from escaping. When you are about to drink, it goes "pfffff" like a French person's disapproval. I recall clearly our dismay at the cheek-piercings. As I also recall our delight with the thanda drink wallah.

By night fall we reached Rose Cottage, in Coaker's Walk, Kodai. Our rooms (for we had a suite with a sitting room) were comfy and chintzy in the style of an English country cottage. The beds were glacial. The ambient temperature had fallen by at least twenty degrees. (Sitting here today in Crete, where the temperature has plummeted from 28° C a fortnight ago to 6° C yesterday, I shiver.) Giri was trembling in one woollen. I wrapped myself tightly in my Ethiopian blanket, as we headed out for the Tibetan restaurant called "The Tibetan Brothers" and we learnt how to say "Tashi delek" for the first time and sampled momos for the first time ever. I allowed Giri to sleep on the sofa with a blanket. The next day hotel management were furious. But then they relented. Otherwise, he would have been sleeping in the car. He ran off on an adventure of his own (whilst we were sightseeing) and returned with a mongrel stray puppy. He adopted it to take home to his son. From that moment on, we were accompanied by a puppy joyfully partly-constrained in a cardboard box. It was a sweetie.

Stepping out the following morning, in brilliant sunshine, we circumnavigated the Lake. Admiring the views, stretching our legs, fending off rikshaws who wanted to take us for a ride.... Indian tourists screamed with delight in pedalos ; children on donkeys paraded past us ; we were the weirdos who walked. Giri was in a huff since we had dispensed with his services for the day. (But he did find his puppy.) 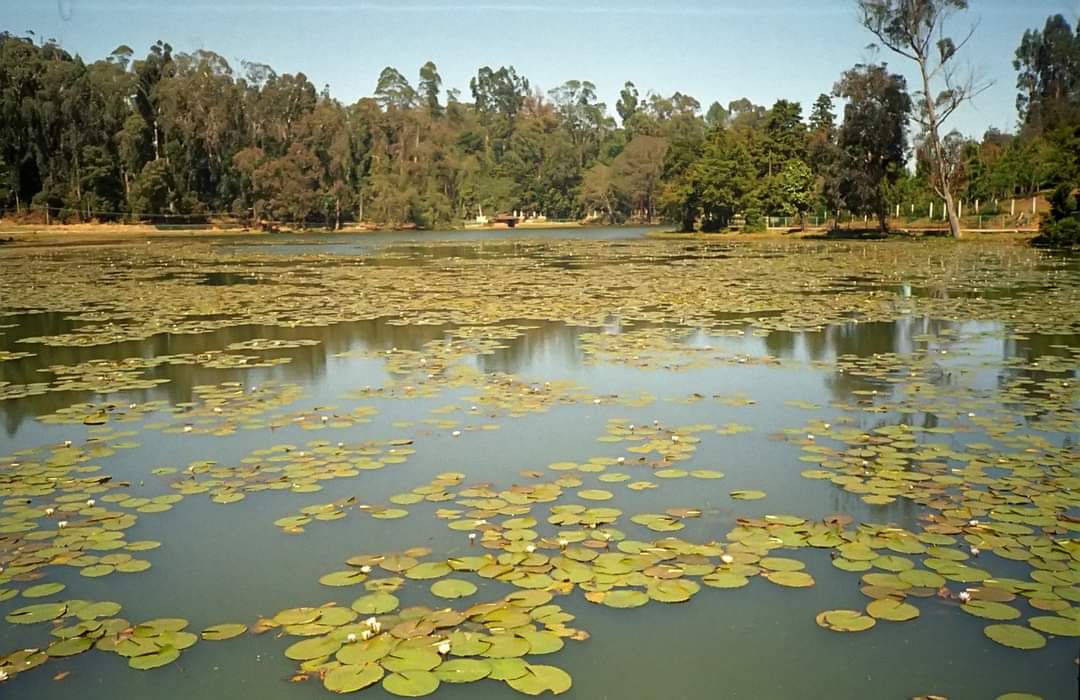 A stroll around town showed signs that yes, this place was founded by American missionaries, with a surfeit of churches to bear witness to the fact.

It was surely time to eat momos again. Thanks are due to Mark and Sujeewa who had recommended the place. Well, Mark had mapped out most of this journey, from the warmth of the Poovar hideaway, as he sat over his newspaper and chai with an invisible "Do not disturb" sign floating over his head.

The Scent of Cardamom

The Olive Brook, Pothamedu, was our home for a few days, including Republic Day. (As an aside, I have just glanced at my previous trip report, written ten years ago, already late for a journey we undertook precisely fifteen years ago, and am slightly abashed to see it was Kodaikanal first and Palani second. If truth be told, it was Madurai first, Kodaikanal second and Palani later on. Never mind. Poetic liberties and all that.)

The Olive Brook is a very comfortable resort and situated amongst a plantation of cardamoms. They also had coffee bushes, where we pilfered some red berries and attempted unsuccessfully to dry them in the sun.

A "points" tour took us to Top Station where we were surprised to hear Greek being spoken by other tourists.

A hop skip and jump into Munnar for internetting and gift purchases. We bought some essence of lemongrass for our Catalonian friend. We bought teas of various kinds. We tried hard not to fill our rucksacks to bursting point, mindful of the fact we had more travels ahead, not all by car!

At this juncture, I can bring to mind my original India itinerary, planned over discussions with friends from yoga class, some of whom were my first inspiration for visiting Kerala . I wanted to do yoga, follow in the footsteps of yogis and yoginis. I was equally entranced by the notion of Theyyam, a certain style of traditional Indian ritual dance, which is only performed at certain times of the year in Northern Kerala.

Having joined a sister forum (I need not name) with an avatar of theyyamdancer, we then proceeded to ditch most of our original route.

My itinerary was like this : Fly into Trivandrum; stay at Poovar (a week's stay pre-booked) ; to Cochin (hotel pre-arranged) ; then to Kazargod, and neighbouring villages for theyyam; then the Western Ghats, and somehow to Mysore, for a pilgrimage at the shala of Pattabhi Jois, the guru of Ashtanga yoga. After that, the temple towns of Tamil Nadu, and then fly home from Chennai.

The actual route : Fly into Trivandrum, stay at Poovar, daytrip to Kovalam, daytrip to Kanyakumari, road trip through the Western Ghats, taking in Madurai, Kodaikanal and Munnar, Cochin, fly to Chennai, fly to Port Blair, boat to Havelock, in the Andamans, flights back to Chennai via Port Blair, fly home from Chennai.

I don't think I missed out.

Mysore will still be there, even though Sri PJ is no more. I used to frequent a forum for Ashtanga practitioners, now defunct, which was full of descriptions of life in Mysore. I feel as if I have already visited the place vicariously.

As for the theyyam, my friend Naveena has photographed it so well that I have been an armchair traveller to the villages of Northern Kerala as well.

Descent, a Coda
The descent from the cool vastness of the Western Ghats, through multiple hairpin bends, through the tangled traffic of Ernakulam, and at last to Fort Cochin, finally all the way to M....... House, seemed endless.

We had checked into this luxurious hotel on the recommendation of an elderly relative in London, who had grown up in India. The farewell cup of tea with Giri was negotiated in spite of protests from the hotel staff. It annoyed me immensely.

A few days later we were cursorily informed that our room was booked and we would have to leave. Given that I had reserved our stay months ahead of time, this came as an unwelcome surprise. For some reason, they wanted us out. Having tea with our driver, not respecting apartheid, was this our crime? Or were they simply confused , disorganised, double booked? This misfortune turned out to our advantage when we shifted to Koder House, an altogether more luxurious establishment, where we were given not only a discount, but a tremendous welcome. Imagine then, years later, how surprised we were to meet in a North London shop, an Indian guy who knew the family who ran Koder House, one of the few remaining Jewish establishments in Cochin.