Pedalling my way through Madhya Pradesh

Back to bcmt after a long hiatus. Was planning to share this trip here since last year but... procrastination

As per bcmt tradition, here's a teaser - 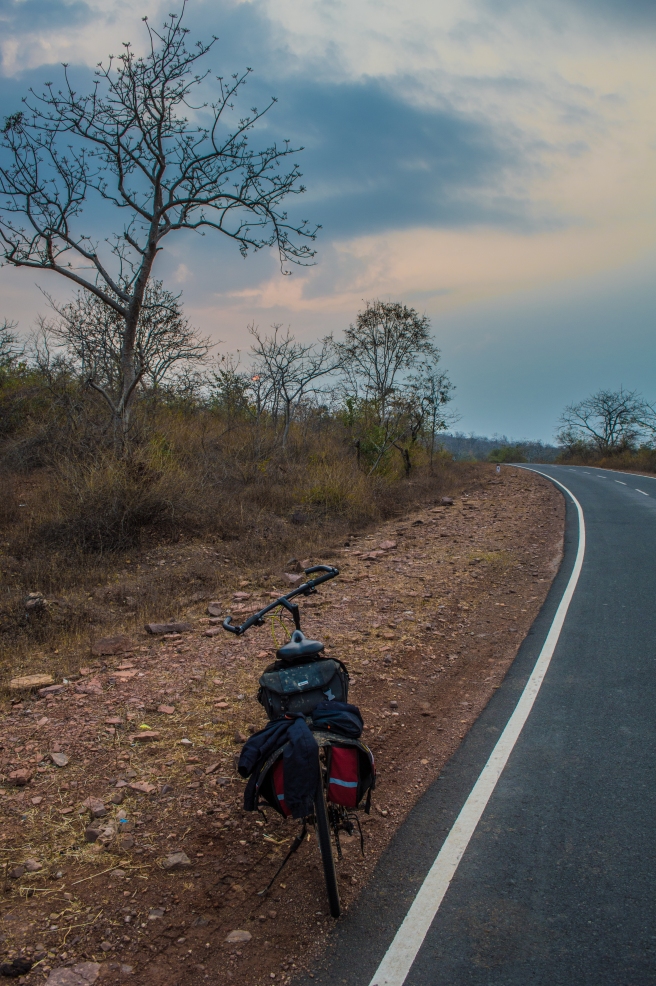 Wow! Hats off to you. Looking forward to the main course .

The seed of bicycle touring was always there in my mind but never cared to water it. I was of the idea that it requires some superhuman strength and stamina to ride a bike for hundred’s of kilometres and would take few years to get ready. Little did I know that this seed is about to bear its fruits very soon.

On 19th Oct 2017, I bought a bicycle (cheapest geared one I could find) for recreational riding, to put my lazy ass to some work and get used to it after not owning one for almost 10 years.

Much to my surprise, I got comfortable on the saddle in no time and pretty soon I was putting in some decent miles under my belt (or butt ? ). Just after 2 months, in January 2018, I attempted my first century ride (100kms) and ended up doing 106 kms without much of a problem, not even a sore butt. That’s when the idea of a bicycle tour seemed possible.

I started searching for destinations within a range of 200-300 kms and finalized on Amarkantak, the origin point of river Narmada. At the last moment, Amarkantak was changed to Khajuraho and plan was set, or at least I thought so. Later, Khajuraho trip will turn into a heritage trip including Orchha and Chanderi as well.

Not much was to be done here.

Searched Amazon for a bicycle carrier bag to carry my stuff, ordered the cheapest one I could find.

For almost all my trip, I’ll be passing through towns and villages where I could easily get help and, hence, decided against carrying any spares, not even a puncture kit which I’ll be regretting very soon.

Planned to carry the camera bag on my shoulders but, later, managed to attach it to the seat post and it worked pretty well for most of the trip.

Below is a list of all things I carried with me – 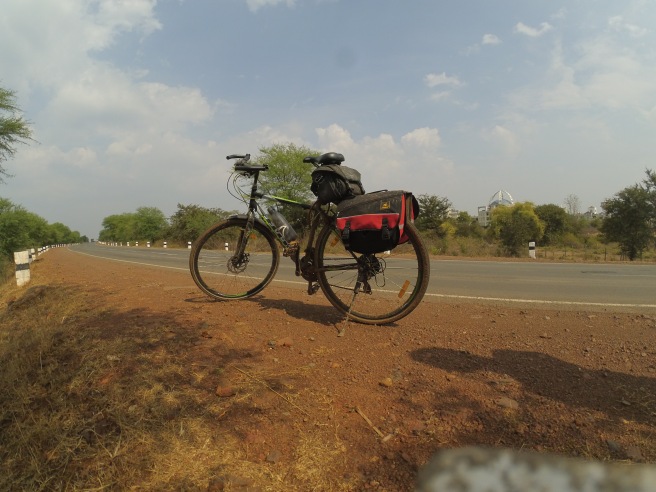 Woke up at 4:30 AM, re-checked everything, had a heavy breakfast and was on the road by 5:00 AM, with the sky completely dark which, very soon I realized, was a mistake.

Jabalpur being a small city, reached its outskirts within half an hour and road turned from smooth to a potholed one. With oncoming trucks and their headlights blinding you, it’s almost impossible to find a way through potholes but not willing to spend time standing beside the road, somehow, managed to move on only to stop at a petrol pump minutes later to take refuge from clouds which, suddenly, started pouring.

Rain stopped in 15-20 minutes and by this time darkness also receded a bit. With enough light to manoeuvre through potholes, was back on the saddle.

Just a few kilometres away, on a thin road, an oncoming truck forced me to get off the road in mud turned into slush due to rains. Within no time, my shoes, pant, bags all got a taste of it. This would continue for 80 more kilometres as, till Katni, one side of the road was under construction. And don’t forget what happens when a big vehicle passes by you on a watery road, you get drenched from head to toe. Just that, here, the water was mixed with mud. 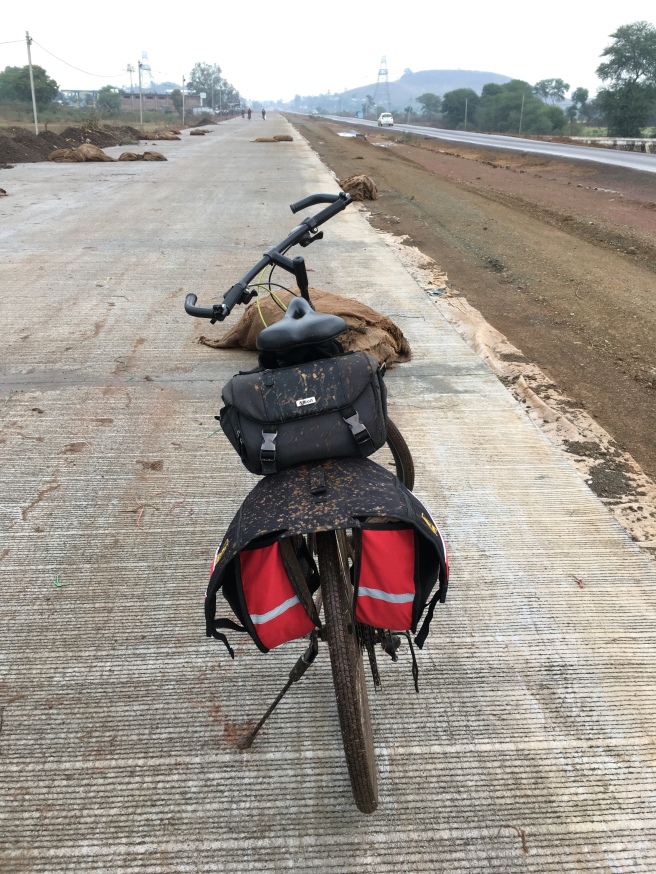 Somehow, with slush all over my bike and me which was hindering with the drivetrain and making pedalling a lot more harder, and food breaks, I managed to reach Katni at around 1:00 PM.

Thinking it is too soon to call it a day, decided to push forward for 20-30 kms more. This again turned out to be a mistake as I wasn’t able to find an accommodation until next 60 kms. But after Katni, roads were in good shape which made for a much needed smooth ride and hence I wasn’t complaining. 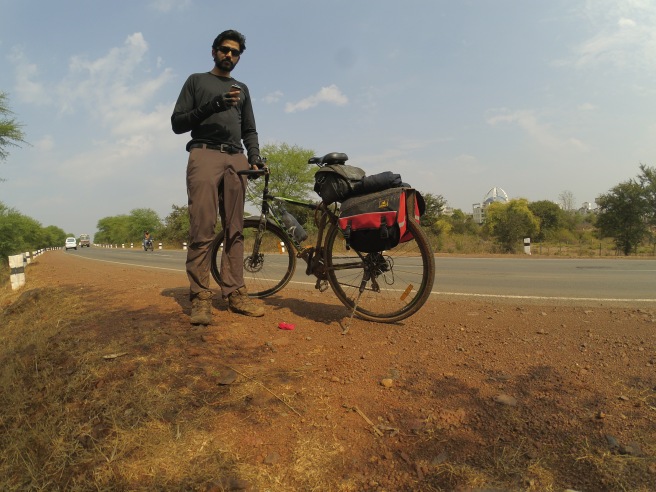 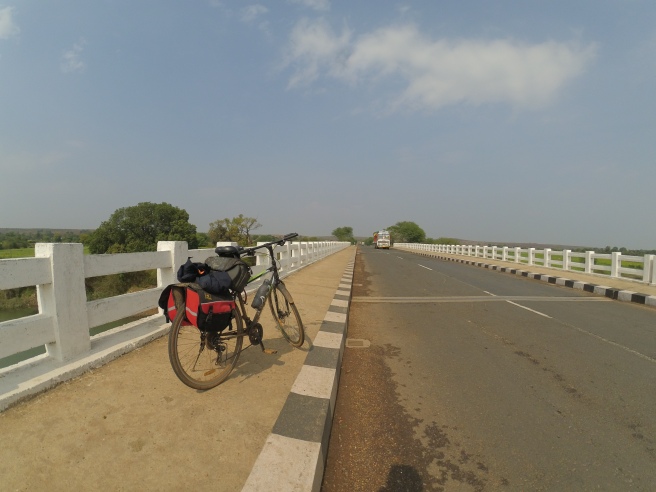 Fortunately, I reached Pawai as the sky started turning dark and managed to find an accommodation there. Finally, some rest for my legs.

At around 6:00 AM, I woke up to a punctured rear tyre. None of the shops was open, had to wait for more than two hours to get the puncture repaired.

For these two hours, I was in a tea stall with many villagers crowding around my bicycle looking in amazement at the gears and throwing tons of questions at me. Some were amazed that I rode my bicycle all the way from Jabalpur and some had that “chutiya (stupid guy)” look on their face.

The thing that surprised me the most was that how many of them assumed that the cycle moves by itself without putting any effort in pedalling because it has gears. And this question was there in most of the villages I passed through. I guess, they thought it has some kind of electric motor.

Anyways, after satisfying the curiosity of villagers and getting the puncture repaired, I was back on the road by 8:30 AM. Breaking my fast at Amanganj (some 20 kms from Pawai), I was moving towards Khajuraho at a good pace, enjoying the countryside, with occasional shouts of “arey..gear wali cycle!! (Hey.. a geared bicycle!!)” from village boys. 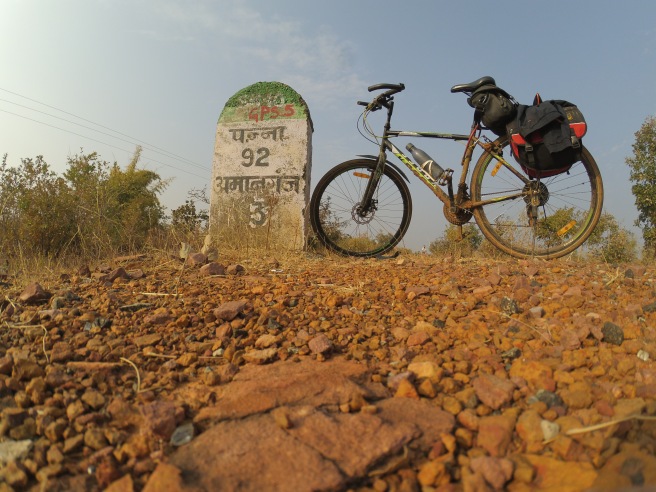 All of a sudden, near a village named Vikramganj (If I remember the name correctly), a boy started riding his bicycle in front of me. Thinking he’s trying to race me, I slow down. He also slows down and starts a conversation with me. That’s when I come to know that his friend from a village I passed through earlier had called him on phone and told him some city-looking guy is going on his bicycle. So, he was there on road, waiting for me. WTF, Seriously ? was my reaction. I would be lying if I said I didn’t feel, for a moment, like a celebrity with fans waiting to see me.

We stopped under a tree with his two friends joining us a few minutes later. I answered their questions, asked them few about there life, clicked pictures with them (another celebrity moment ). After almost half hour of chit-chatting, bidding adieu to them, I pedalled forward towards Khajuraho leaving behind my short-lived fame. 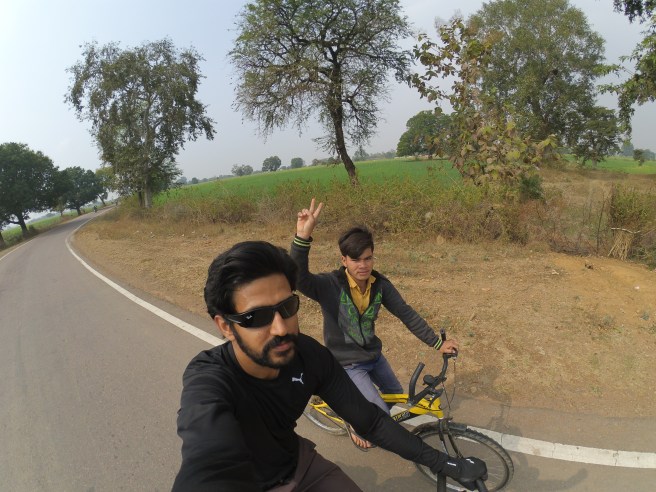 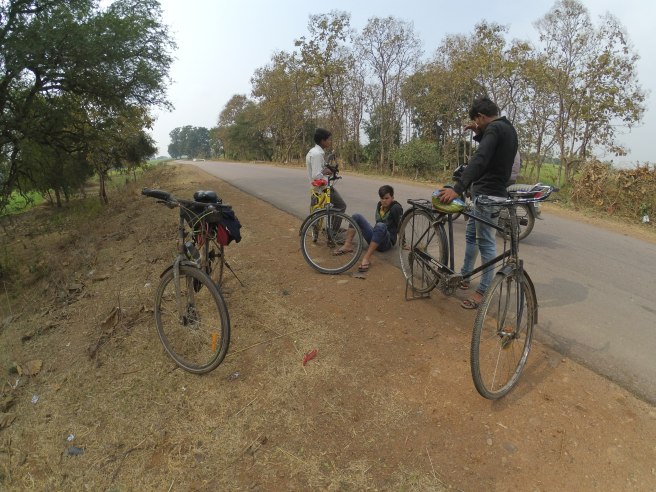 Soon enough, agricultural fields with yellow mustard flowers were replaced by dry dense forest with boards of “Tiger zone” all over the place. I was in “Panna tiger reserve” area (though the main tiger reserve gate was still some 40 kms away). The road was great with dense forest on both sides and no village in sight for more than 20 kms, the ride was thrilling, to say the least, without any problems but one – headwinds. By the time I reached the tiger reserve area, headwinds became a bit too strong and pedalling, even in low gears, was taking too much effort. It reduced me to a snail’s pace. At least the sun was behind the clouds to give a bit of relief. 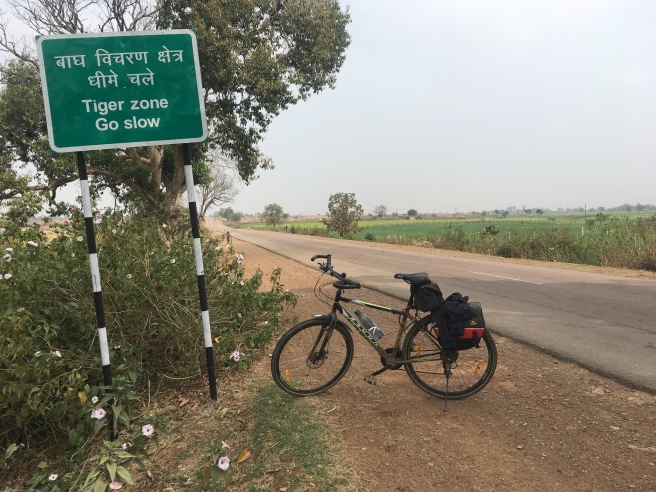 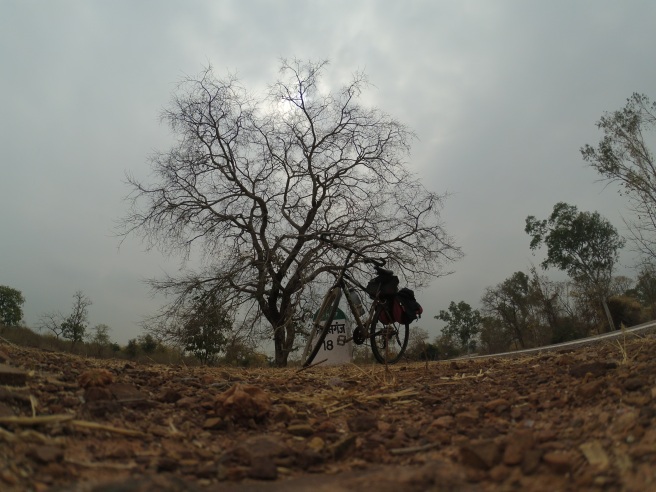 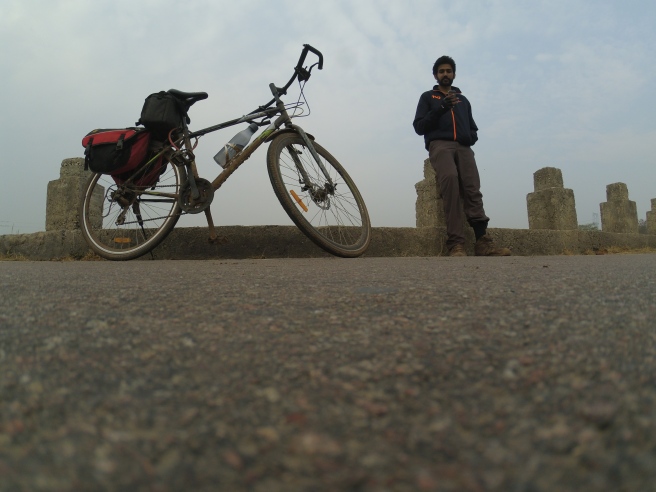 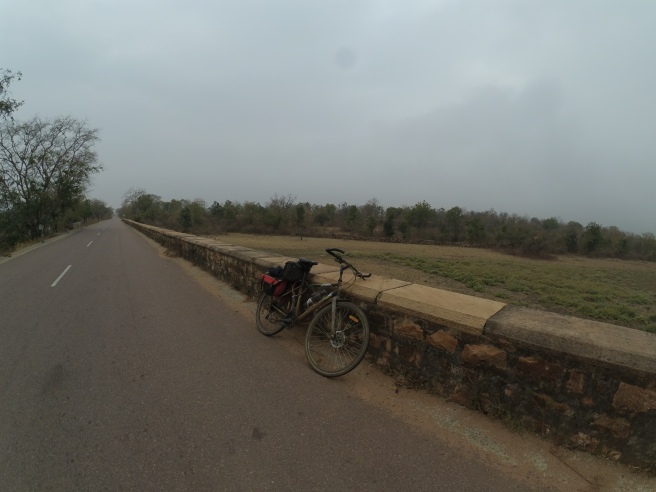 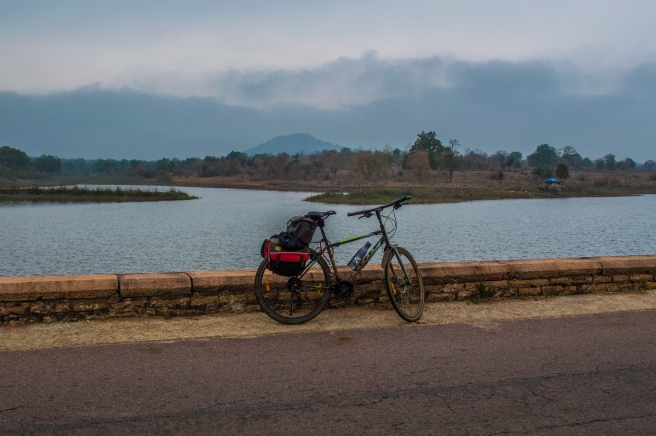 Slogging through the headwinds, I managed to reach Panna city around 1:30 PM and decided to continue towards Madla (20 kms more), Tiger reserve gate, and stop for lunch there. It turned out to be a bad decision as the road was very thin and in pathetic condition all the way till Madla. With cars and buses zooming past me, I had to go off the road quite frequently. Some ghat sections en-route were also not helping. It took me around 2 hours to cover 20 kms and reached Madla at around 3:30 PM and stopped at MPTDC Jungle camp hotel to have lunch.

While waiting for my order to come, I saw some tourism brochures lying there among which Orchha and Chanderi caught my interest. I’ve heard about Orchha earlier but Chanderi was completely new to me. It was, later, in Khajuraho, while searching for some alternate route to go back as I didn’t want to trace the same route back to Jabalpur, that I saw, on a map stuck on my hostel’s (Zostel) wall, Orchha is not far away from Khajuraho and Chanderi is almost on the route back to Jabalpur via Lalitpur. Hence, a plan was made then and there to include Orchha and Chanderi.

After Madla, roads are in very good condition. After lunch started towards Khajuraho only to stop a few kilometres later at Chandranagar due to a puncture. It was rear tyre, again. Twice in the same day. 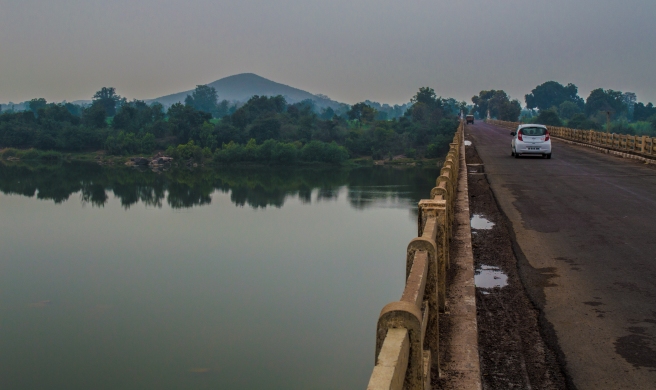 Puncture repairing took a good amount of time and it was only after sunset that I was able to reach Khajuraho. Straightaway went to Zostel, checked in and called it a day. 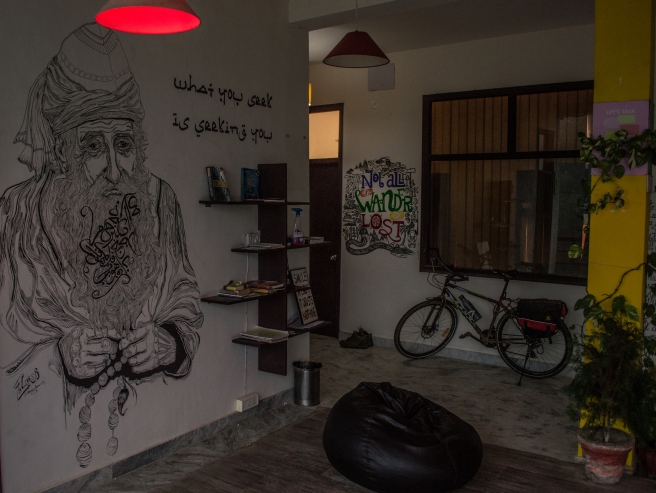