This is a trip that almost did not happen.

A trip, which was delayed multiple times and even when I eventually left for Kasar Devi (originally I had planned to go there), I was almost in no mood to travel.

Hence, this trip to Ranikhet was a forced one. An anomaly of sorts, because I love to travel, especially on my own and that too to Kumaon, where I have not been, since November 2016 (I guess there is an irony in that).

Nonetheless, I travelled to Ranikhet and it was the best-forced decision I ever took in my life and here is how it went...
Last edited: Aug 11, 2019

Entire day I sat in my room, brooding. Though I had taken out my rucksack, I had not begun packing and neither had I booked the ticket for Delhi to Haldwani Volvo. Thankfully, though, I had charged my power banks and DSLR batteries, even while I contemplated my next move.

I planned to book the bus ticket, once my sister came home from work. Once she is back, I check online and there are enough seats available in 9 pm UTC Volvo to Haldwani and I pay Rs. 816 for a seat, though internally, I did not wish to.

By the time I was done with packing, it was well past seven and I had to catch a cab to Anand Vihar ISBT, thirty kilometres away.

Thankfully, the cab arrived without any delay and around 7:20 pm, I began my journey for Anand Vihar.

Despite the traffic, I managed to reach the bus station an hour later and by the time I went to UTC section, people were already boarding the 9 pm Volvo. 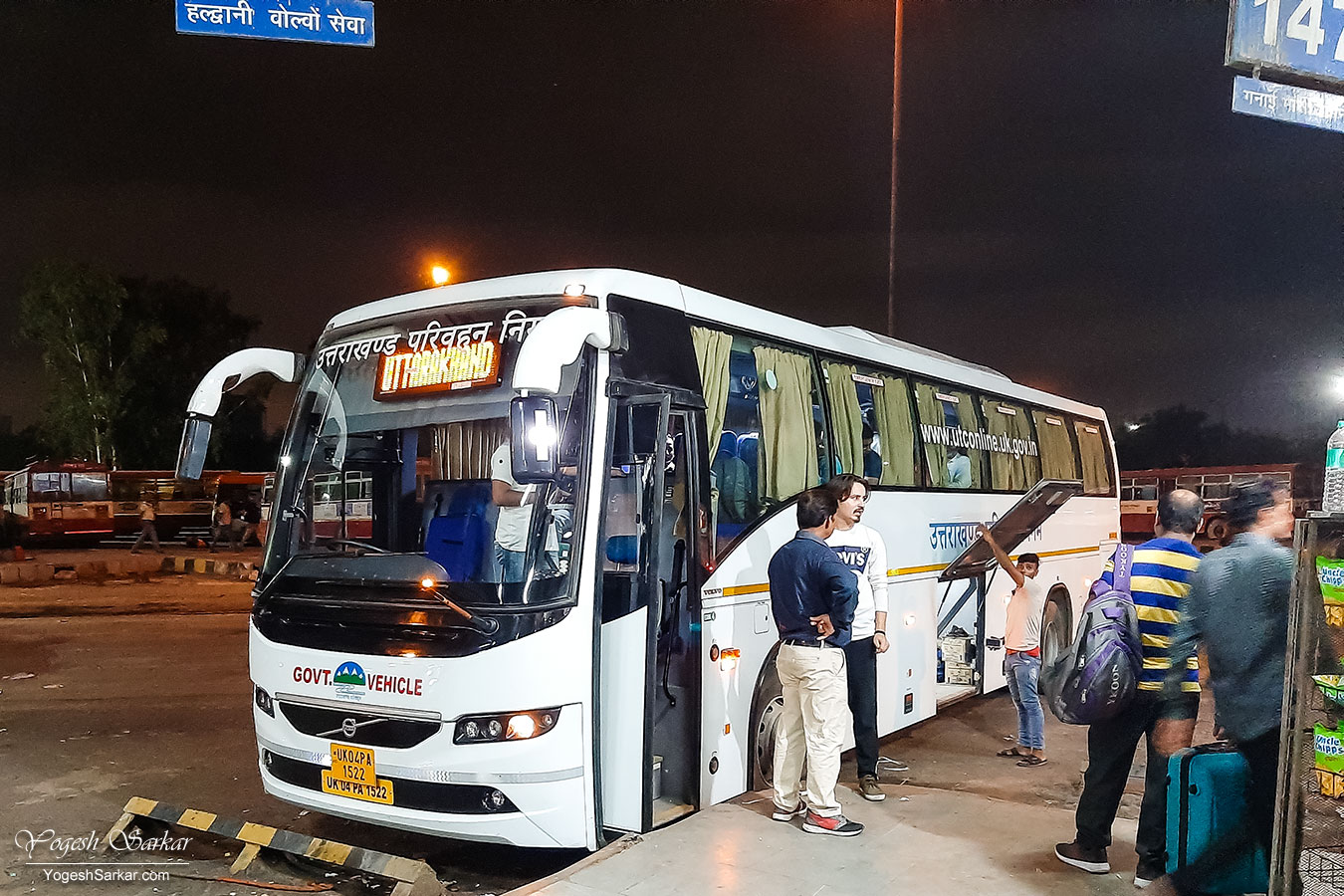 I too load my luggage, buy a packet of green Lays chips and then have my dinner of aloo paratha (courtesy my sister) in my seat.

The bus began its journey to Haldwani at 9:10 pm, however, it wasn’t until an hour later that I began to lose the melancholy state I was in and became enthused for the trip.

Maybe it was the pothole-filled roads of Ghaziabad that the bus was navigating through that shook me into realisation or the fact that there was no turning back now. What is done, is done and we have to live with the choices we make, however, forced, they may seem at that point in time.

Thereafter even though I was in deep contemplation, I was at peace and looking forward to what was to come next.

And that was Uday Veg Dhaba at Babugarh! 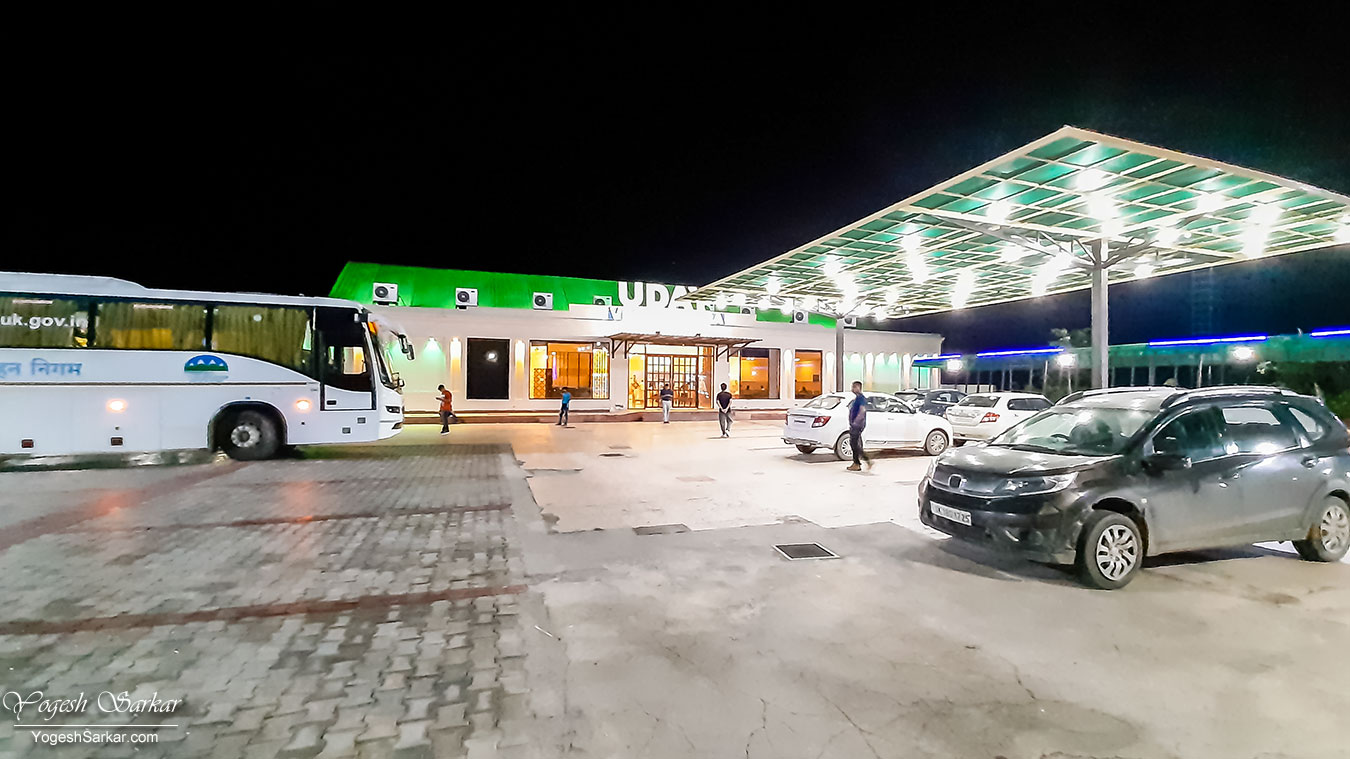 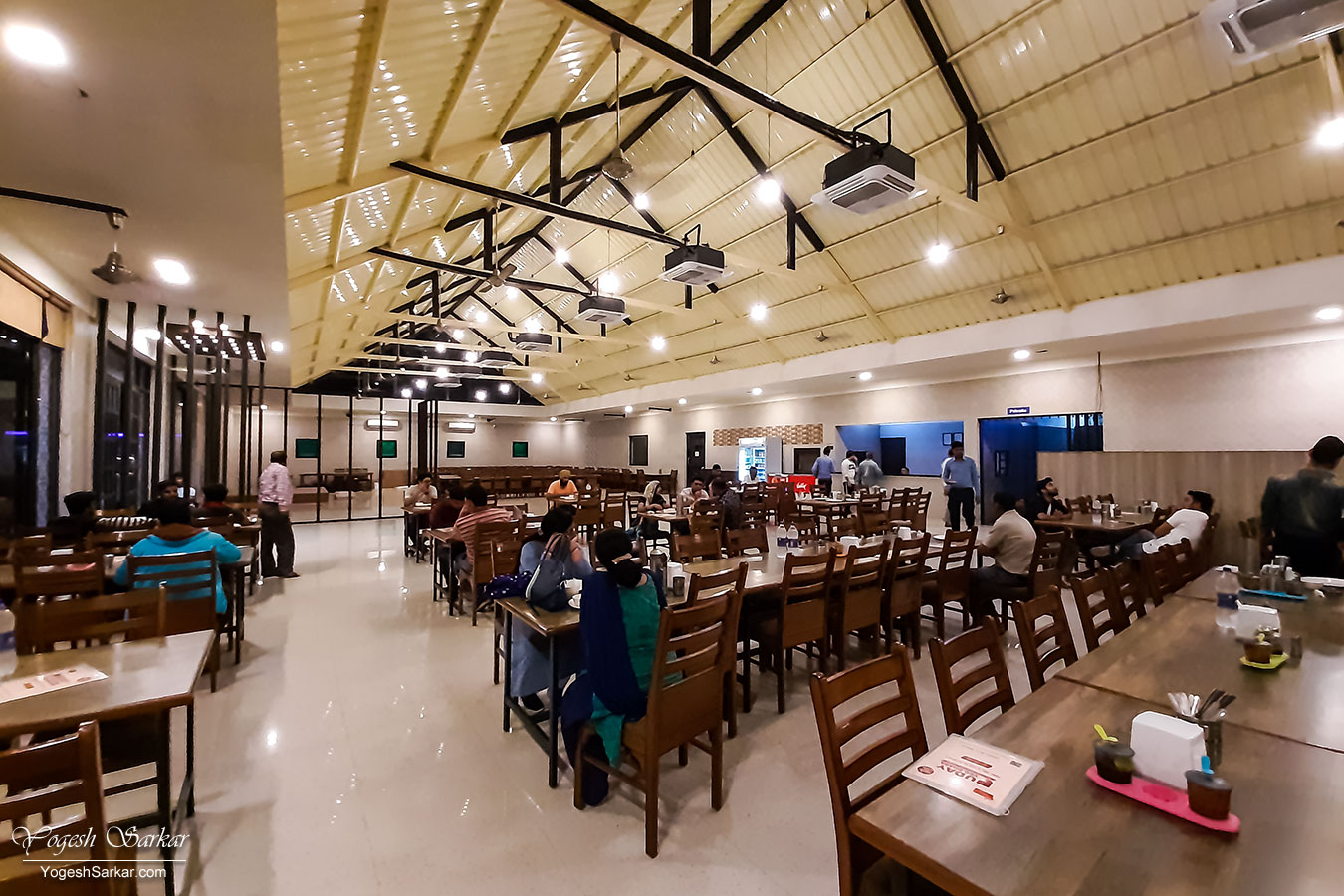 Well, the first and only pit stop en route and while other had their food, I make do with a tea (Rs. 20) and it was good and so was the staff of the restaurant. This is one of the reasons I prefer taking Volvo buses, instead of AC or ordinary buses. The pitstops are a lot nicer and usually not all that more expensive. 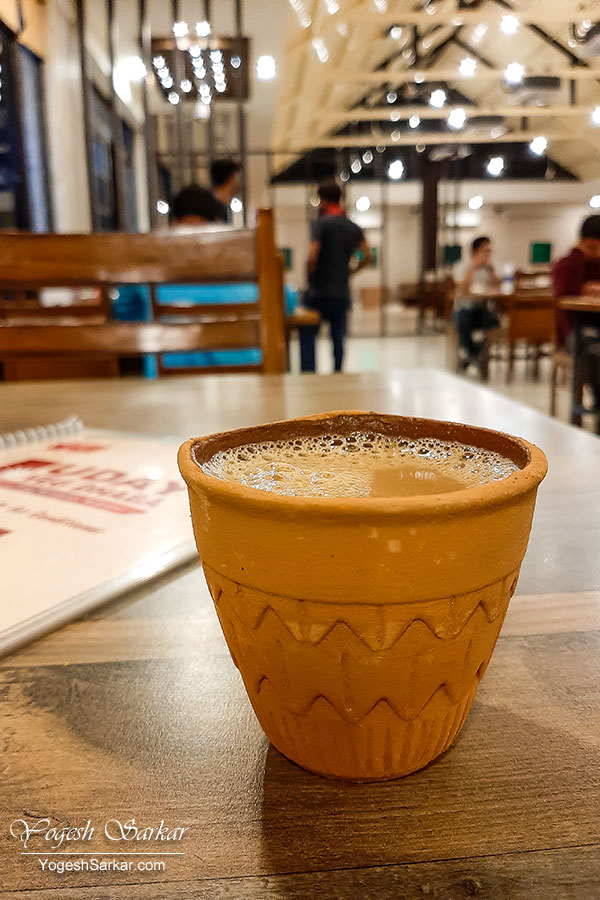 Soon we are back on the highway, cruising at a comfortable speed until we reach Rampur.

As usual, the stretch between Rampur and Rudrapur is in disarray. However, the work was on to not only widen the highway but also to make it smoother.

I remember travelling through this stretch of the road quite frequently until about three years ago. The road was a lot more back-breaking at that time and the mobile phone network, a mess as well. I had to continuously switch between Vodafone and BSNL, in order to get enough coverage to chat with a friend on WhatsApp and that too for only half the route. The rocking motion of the bus, as it swayed out of one pothole to another, made it even more difficult.

Today not only was the road smoother, but JIO was also working fine almost throughout the route. Ironically enough, I was not chatting with anyone, just reminiscing of how things used to be.

Rudrapur to Haldwani was smoother than the last time I travelled on it. Helping the bus reach almost on time (4:10 am), though the Volvo dropped me outside the bus station and I had to walk a little bit, with my luggage.

I have a love-hate relationship with Haldwani Bus Depot. It is wide open, filthy, unorganised and people, as well as buses, drive through it almost with murderous intent. Yet, it is also the bus stand I have spent the most time at and has been the venue of intellectual conversations with fellow passengers at times and has given me a chance to explore deep into Kumaon.

However, today, I was not planning to go deep into Kumaon. I was only planning to travel to Kasar Devi near Almora and spend a few days, doing nothing except maybe reading, writing and just thinking.

I was looking for a bus to Almora when I found one going to Ranikhet. Therefore, I thought, what the hell, let’s go there instead. Especially since only a few hours ago I was chatting with Alok Tripathi and he recommended it to me since I have never been there. 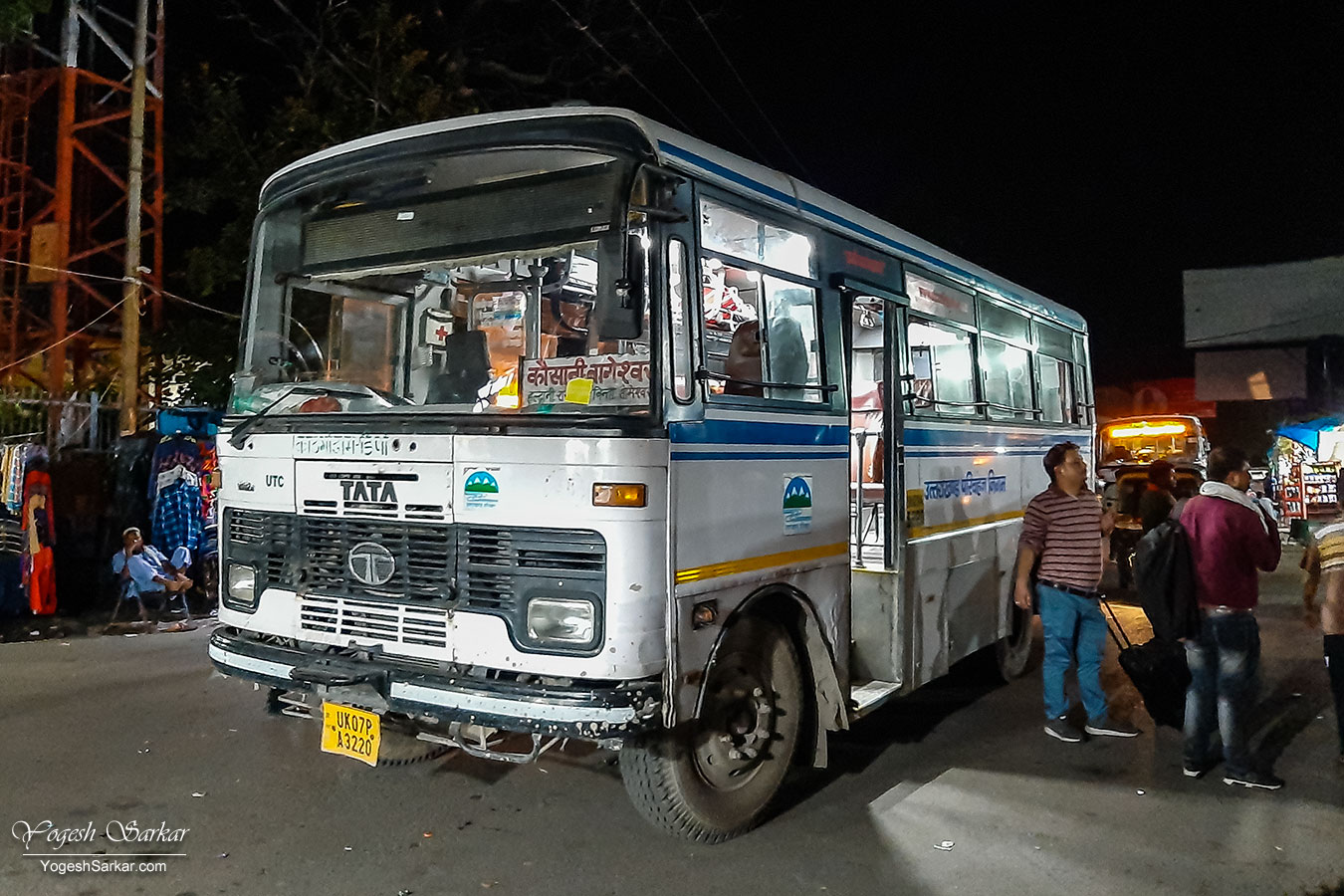 I board the bus and eat the aloo paratha leftover from dinner and soon after the bus began its journey to Ranikhet, with a usual pitstop at Kathgodam workshop to refuel and get another driver and conductor for the onward journey (the bus was travelling from Delhi to Bageshwar via Ranikhet.)

I had to pay a princely sum of Rs. 150 for the ticket to Ranikhet.

The winding ascent from Haldwani to Bhowali is breathtaking, to say the least, with views more than making up for the partially pothole-filled road.

It wasn’t raining, but it was cloudy and yet you could see the stars and the distant mountain ranges at the same time along with faint hues of dawn.

I love this part of the journey due to this and many a time I had wished to stop en route to take photographs, but alas, you cannot do that in a bus. So I savour it through my eyes and appreciate the beauty of God’s creation, Kumaon.

Though it isn’t as beautiful as I would have liked it to be since there is no rain and the accompanying chaos. Flora is in a lighter shade of green due to lack of rain, yet, it is green enough for all but the monsoon travellers.

Sadly though, a lady is sitting in the seat ahead of me and while she is vomiting almost nonstop, her husband is sitting coolly in a couple of seats back, enjoying the journey with his two sons and taking photographs!

I empathise with the woman silently, feel angry at the husband and angrier still because I cannot open window to take in the fresh air or click photographs.

In the moments she is not poking her head out of the window and emptying out the content of her stomach, I take a few photographs and smile at the beauty around me. 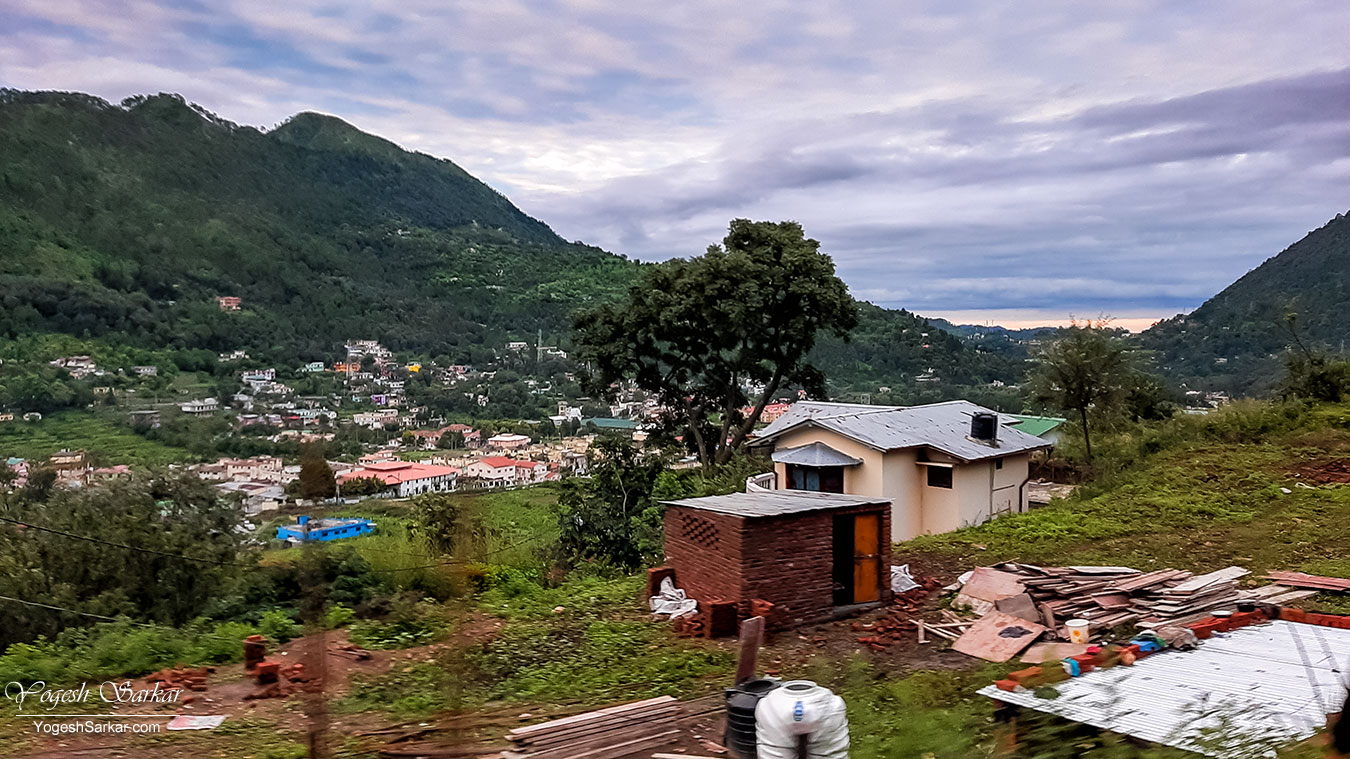 The journey continues towards Ranikhet and eventually, we take a diversion from the road to Almora. This is a route I haven’t explored before and even though it is lower in elevation than the road to Almora, it is beautiful and virgin nonetheless. 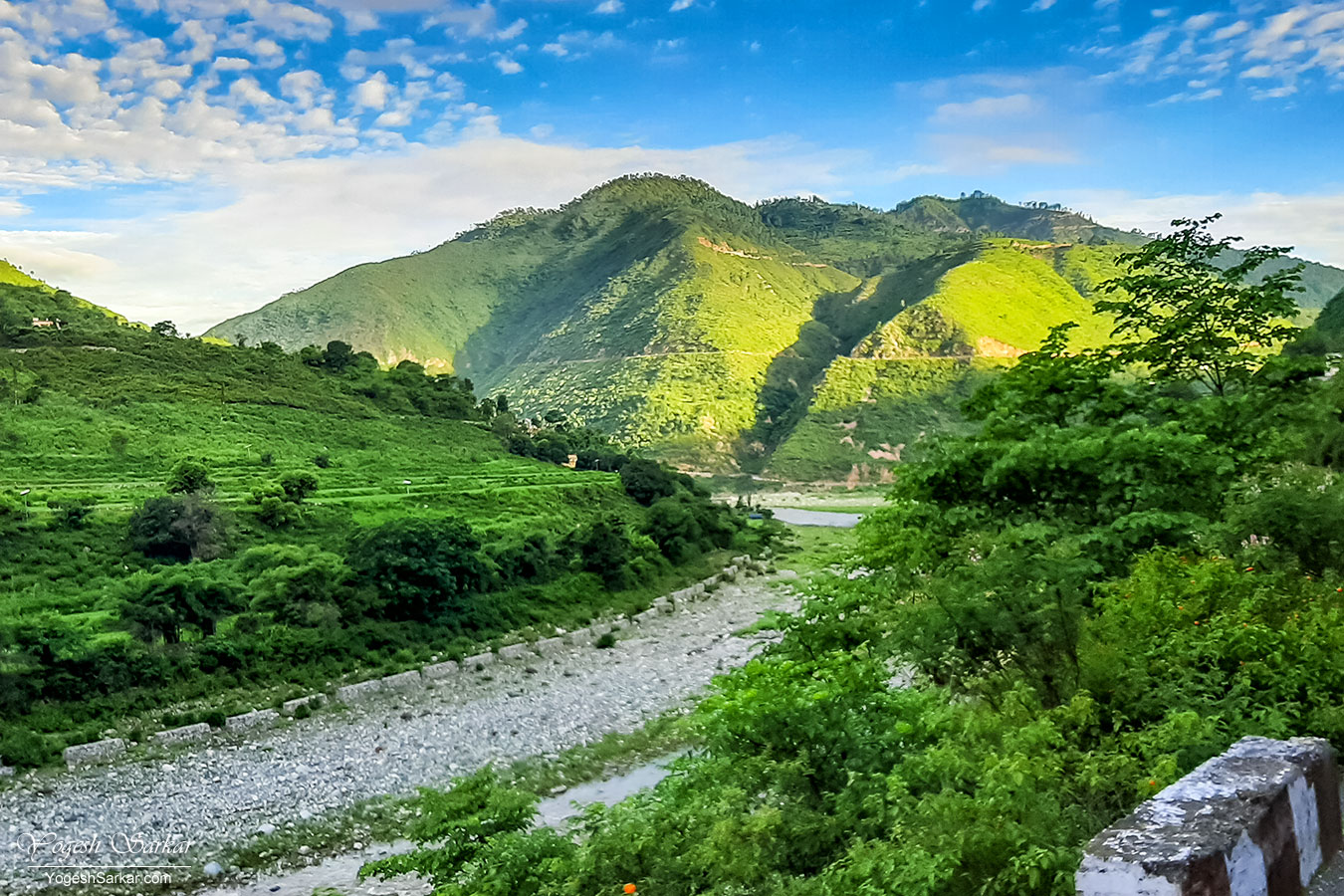 JIO, for the most part, had been working well, only dropping out between towns. However, as we near Ranikhet, it completely drops out and I have to switch to BSNL for data.

We stop at a small dhaba by the side of the road, less than an hour before Ranikhet. It is a serene place, so there is little to complain. Though I order nothing and just click photographs. 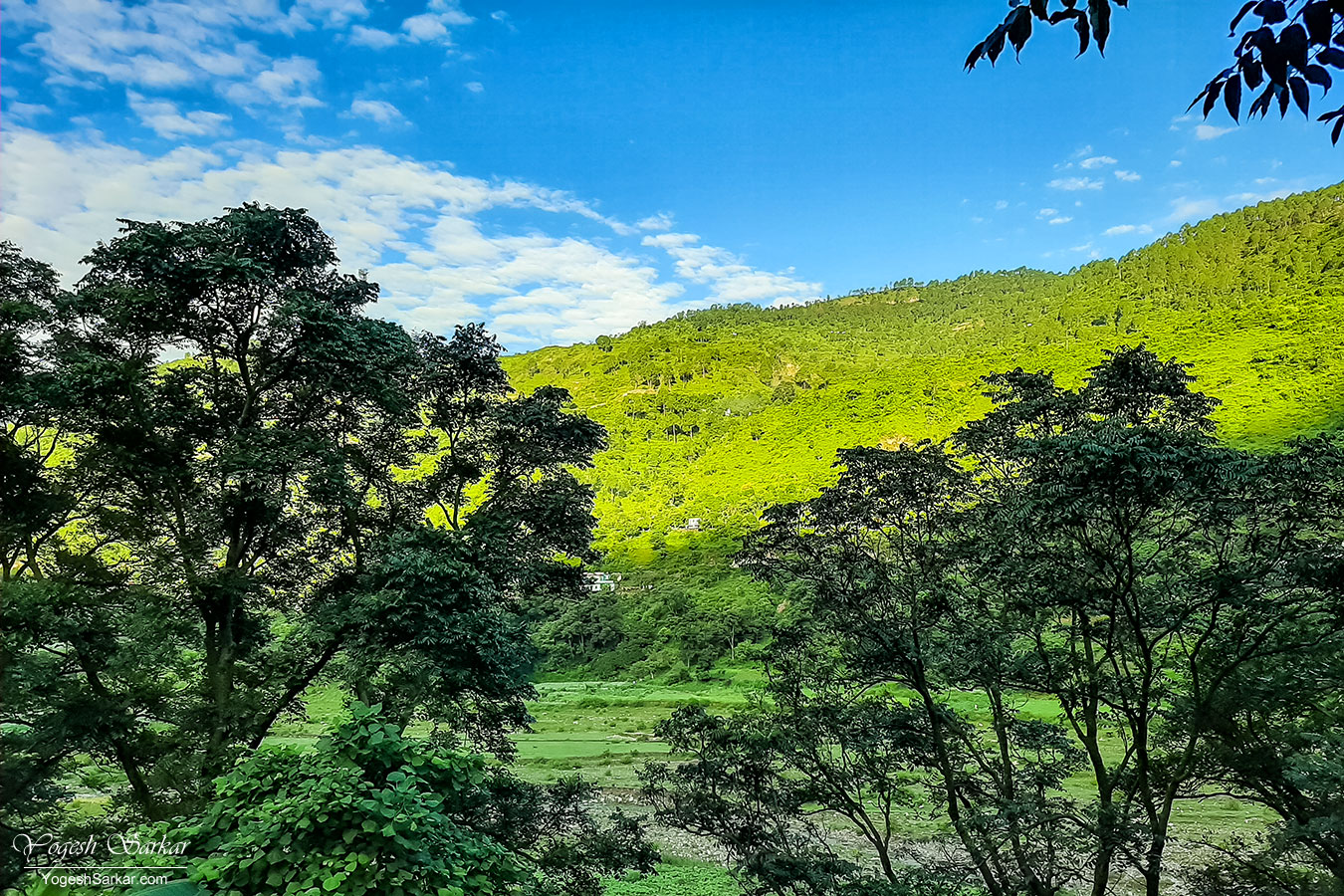 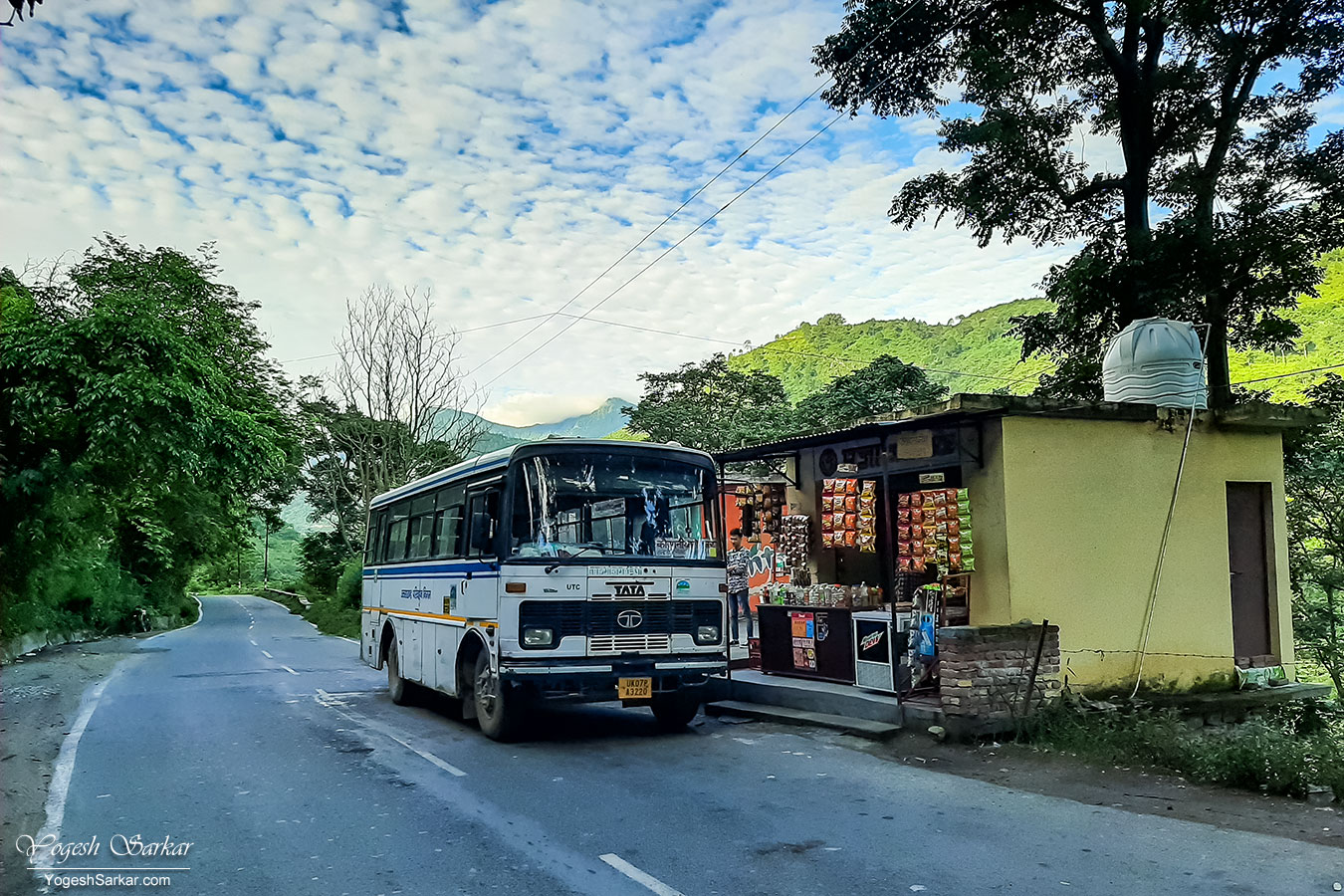 Half an hour later, we continue our journey to Ranikhet and the landscape just keeps on getting better and better. 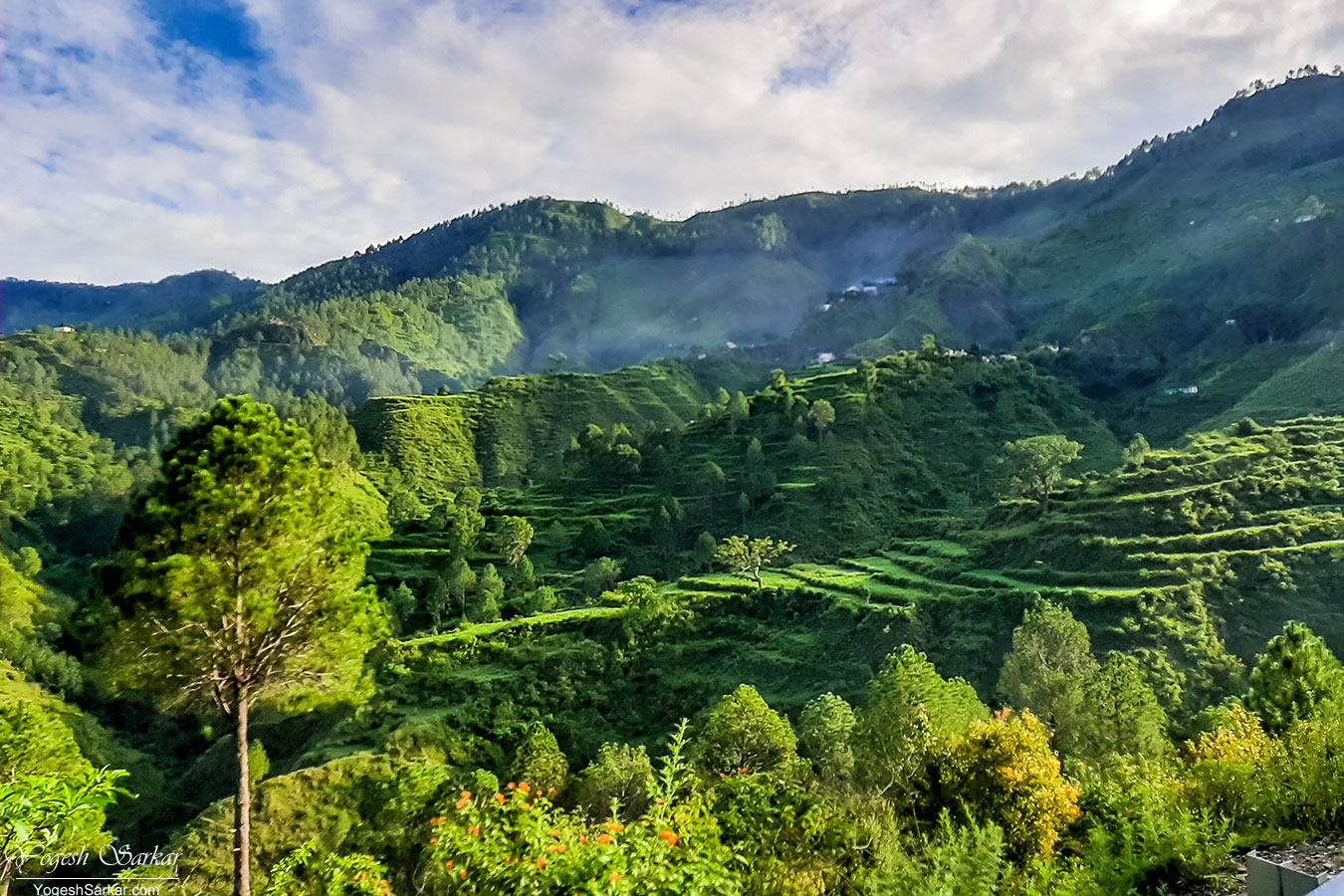 Eventually, we arrive at Ranikhet and the conductor advises me to get off at Subhash Chowk and I heed to his advice, having done no research whatsoever about Ranikhet.

Once I am off the bus, I am confused as to what to do next and I am hungry as hell, since after that paratha at Haldwani four hours ago, I had not eaten anything!

The mall is a few kilometres away and so are KMVN and another hotel I looked up on Goibibo using BSNL connection working on the slow EDGE network. The market road is too busy for my taste and although there are many hotels nearby, I am completely at a loss, until I see something that lets me forget all my worries for a moment.

The place of "Raja Hindustani"

foadbear said:
The place of "Raja Hindustani"
Click to expand...

Oh, didn't know it was shot there. No wonder the cab drivers there think they are heros.

Entire day I sat in my room, brooding. Though I had taken out my rucksack, I had not begun packing and neither had I booked the ticket for Delhi to Haldwani Volvo. Thankfully, though, I had charged my power banks and DSLR batteries, even while I contemplated my next move.
Click to expand...

And that was Uday Veg Dhaba at Babugarh!
[...]
Well, the first and only pit stop en route and while other had their food, I make do with a tea (Rs. 20) and it was good and so was the staff of the restaurant. This is one of the reasons I prefer taking Volvo buses, instead of AC or ordinary buses. The pitstops are a lot nicer and usually not all that more expensive.
Click to expand...

+1. Much better. It looks like here now, except here there is really nothing for me to eat, the word "Veg" is unknown.


+1. Much better. It looks like here now, except here there is really nothing for me to eat, the word "Veg" is unknown.

Clay cups have come into fashion again these days and even the smallest dhabas have them.